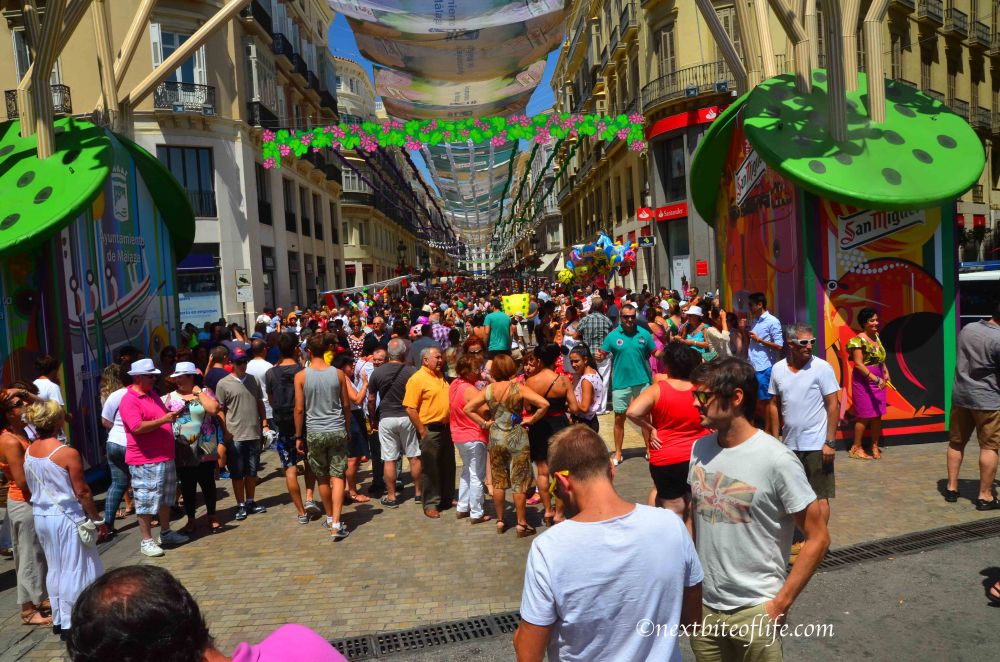 Feria de Malaga people. The city was packed!!! This is Larios street view, but there are so many other side streets that were also jam packed.

The Feria de Malaga ( Malaga Feria) celebrates the takeover of the city by the Catholic Monarchs. It has been around in one form or the other since 1491. Over the years, the feria has evolved into  one of the top fiestas in Malaga,  a 9 day/10 night affair that still goes on, and seems to get bigger yearly.

Millions of people attend the feria. One side effect being (at least for us) that we could not find any accommodation, as we couldn’t have picked a worse time to move to Malaga. The stress was intense, especially moving around with 2 dogs.

A lot of local businesses were also closed. It was like a ghost town. Most stores just had hand written notes on the doors that basically said “closed for feria”. I couldn’t imagine any shops in the U.S closing just for one big ass party..but there you have it, another difference in cultures. Living to work (U.S) versus Working to live (Spain). Guess which one l prefer ;-) 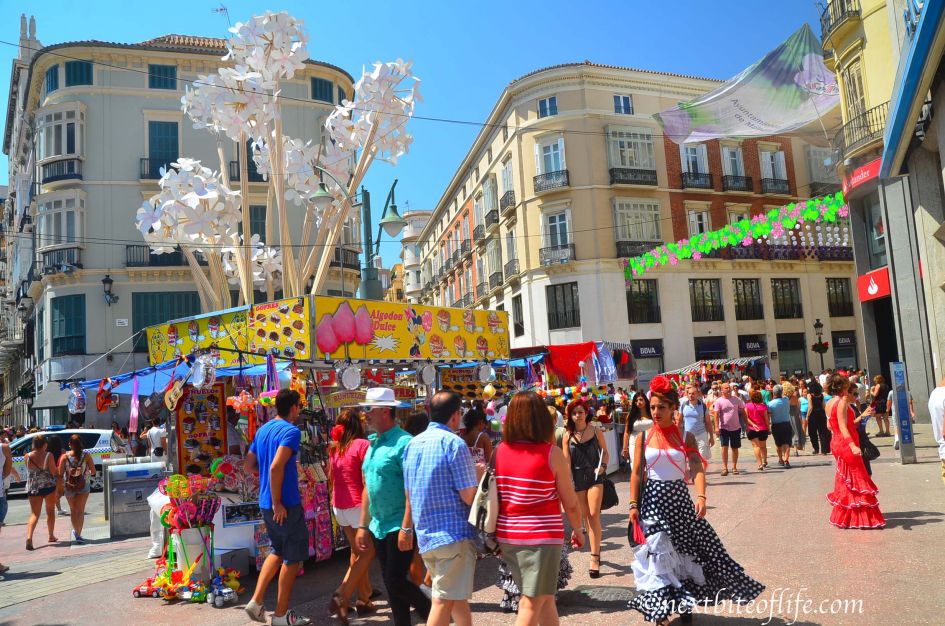 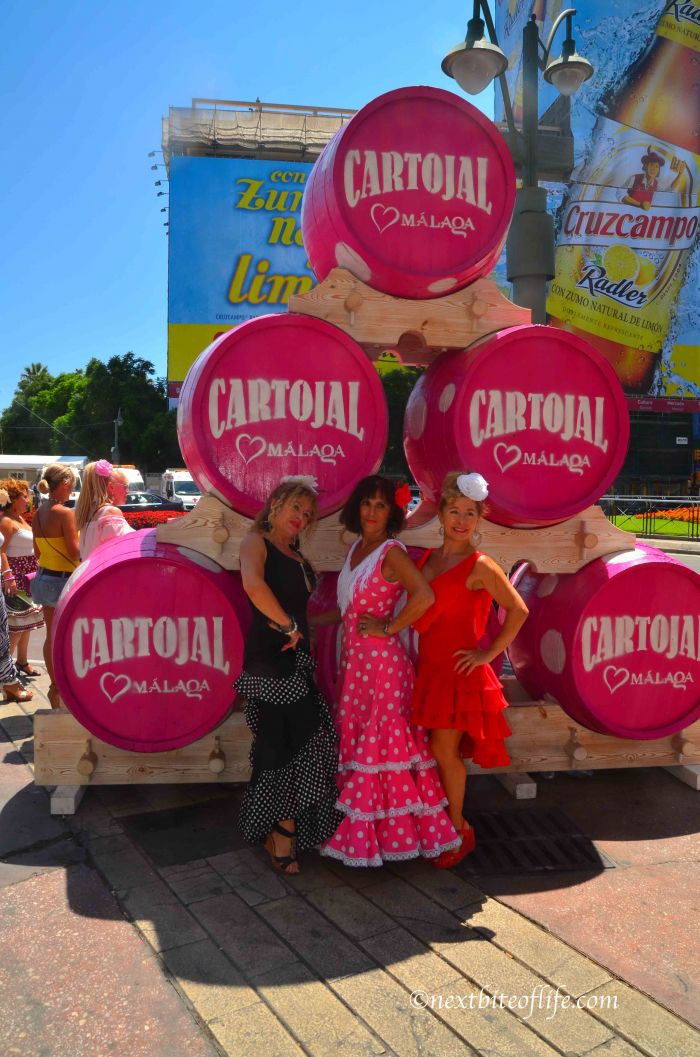 Costumed ladies at the Malaga Feria

There were two areas where the festivities took place:

The center: Marques de Larios is probably the most famous street in Malaga. It is where some of the posh stores are located. My favorite part is that it is covered, so you are not dying from the heat when you walk through it.

There were tents set up throughout the area. During the day, lots of impromptu dances abound, with singing and merry making. There were tapas, beer and wine (tinto de verano which is the preferred drink to sangria, at least in Andalusia) sold at stalls, along with trinkets and flower hair combs for the senoritas in flamenco dresses. The big stores closed at noon on the days so the people could celebrate. 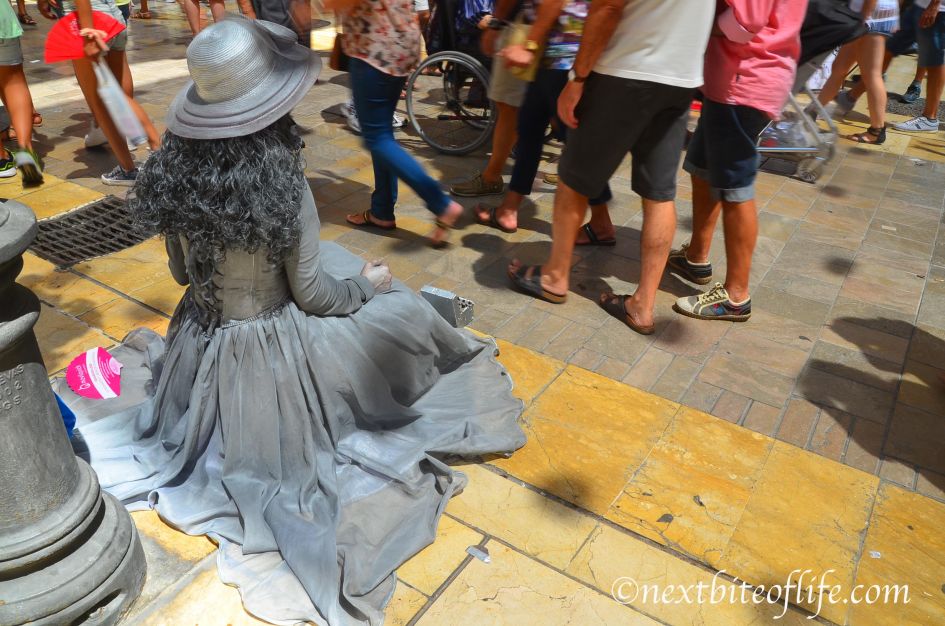 Street artist at the feria 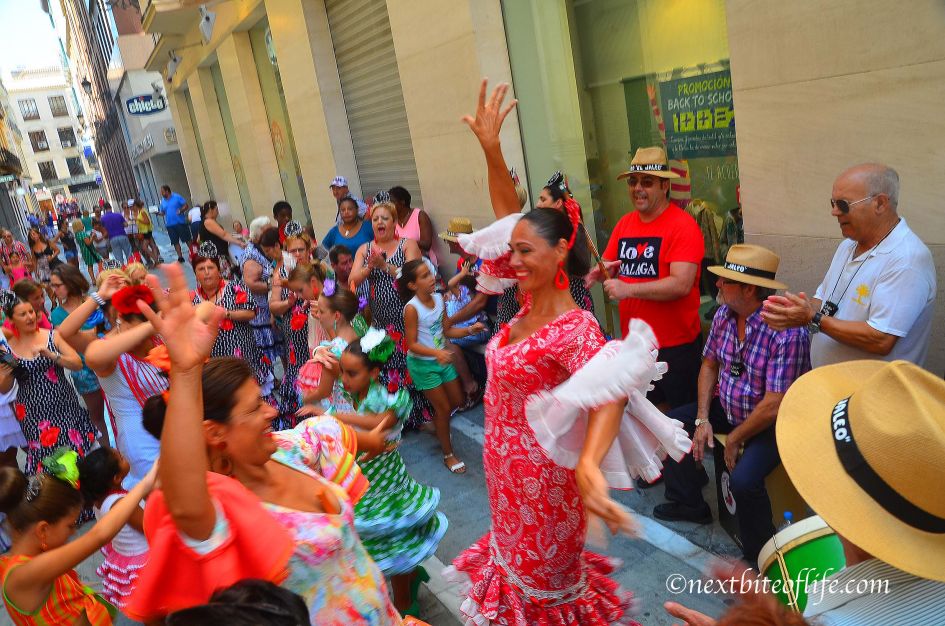 Just about every little side street had singers and dancers. It’s always fun to see pop up flamenco dances.

Over the years, from what l can gather, the number of women who dress up in flamenco dresses have significantly decreased, due to the heat and costs. I can understand the heat part. Though not quite as humid as Malta, it was really really hot!

It is not unusual for the dresses to cost about $10,000 depending on how intricate they are. That is insane, and to tell you the truth, l as a casual observer could not tell the difference between a $50 one or a $10,000 one, but then l am not a native! We only went to this part of the feria. It was fun. I think l would have enjoyed it more had we been settled. 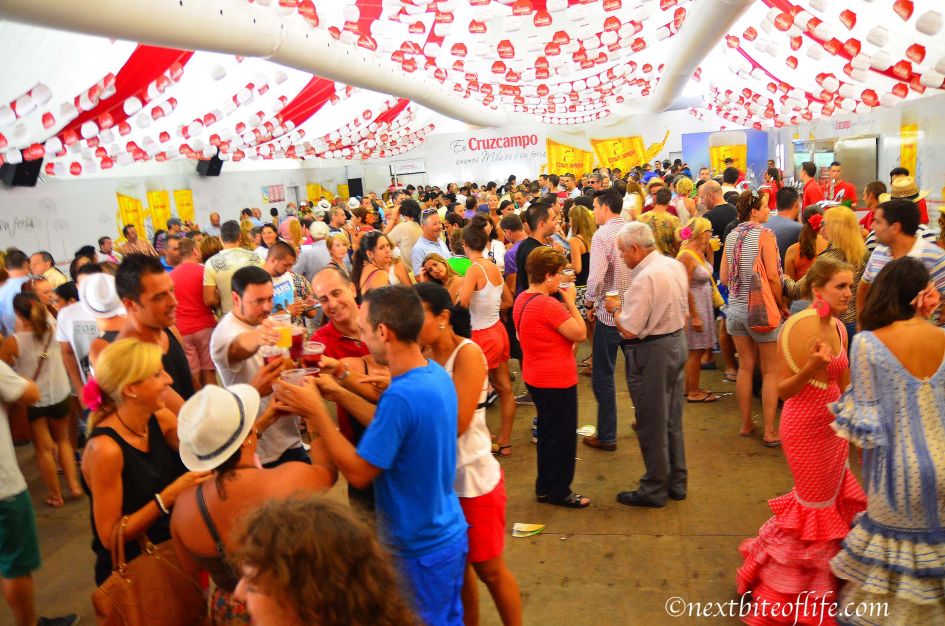 Casetas Malaga – We ventured into one of the cabanas and found a whole lot of dancing and drinking. 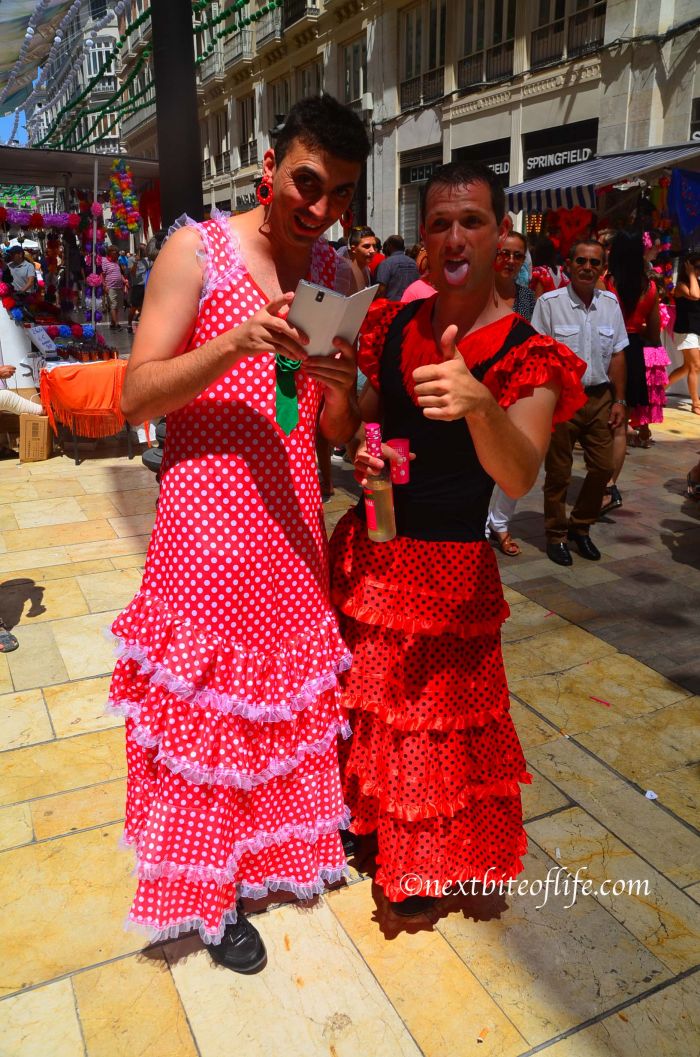 Even some men were in flamenco dresses during the Feria in Malaga celebration! Everyone had fun..

The evening festivities moved to the Feria Real area which is on the outskirts of town. Everything is lit up. I am looking forward to this next year for sure. This year, we were just too nervous to enjoy it. Even though we were not there live, we certainly felt it. The party went on all night..all night..and the music did not stop till 7AM!!!! We heard it, it carried all the way to where we live..even though we were like 3 train stops away.

We were also constantly awakened by the party goers coming back home, or just on their way there. Hopefully , next year, we will get to enjoy this part of the fun. I might even wear a flamenco dress  :-) . These include rides, watching Andalucian horses perform, flamenco dances and fireworks. 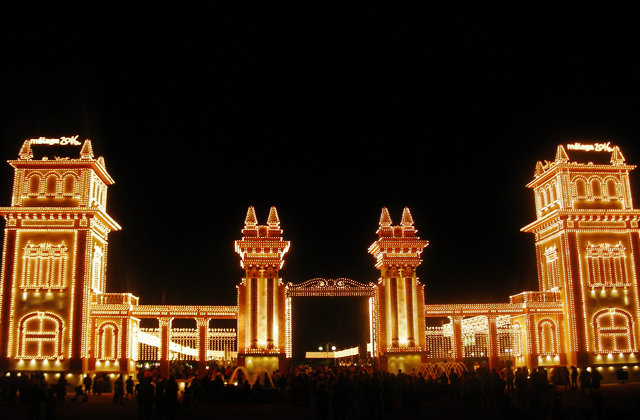 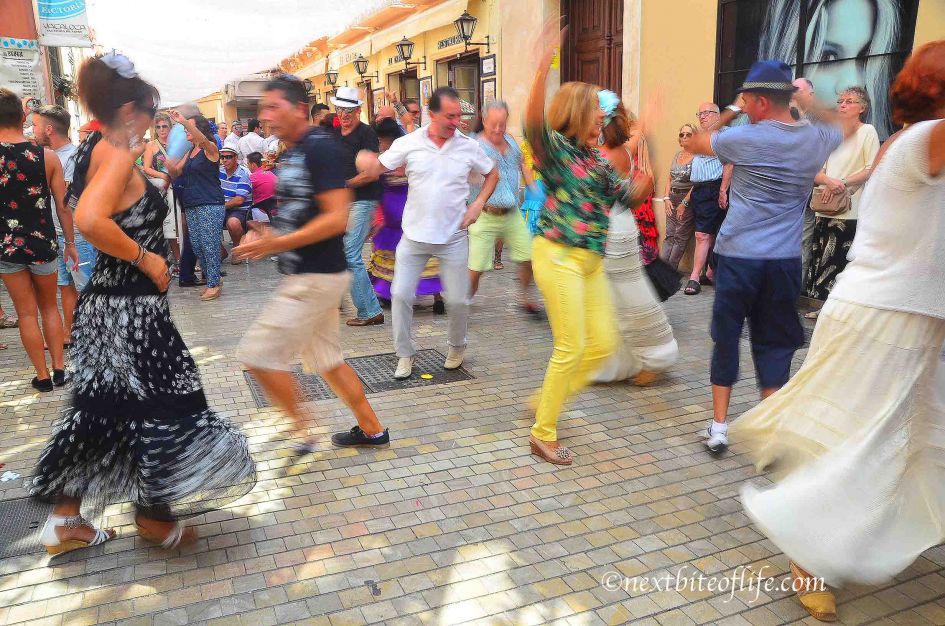 Can you tell from the picture how fast the music and dance was? Everyone loves a party and the Malaga Feria delivers on fun! 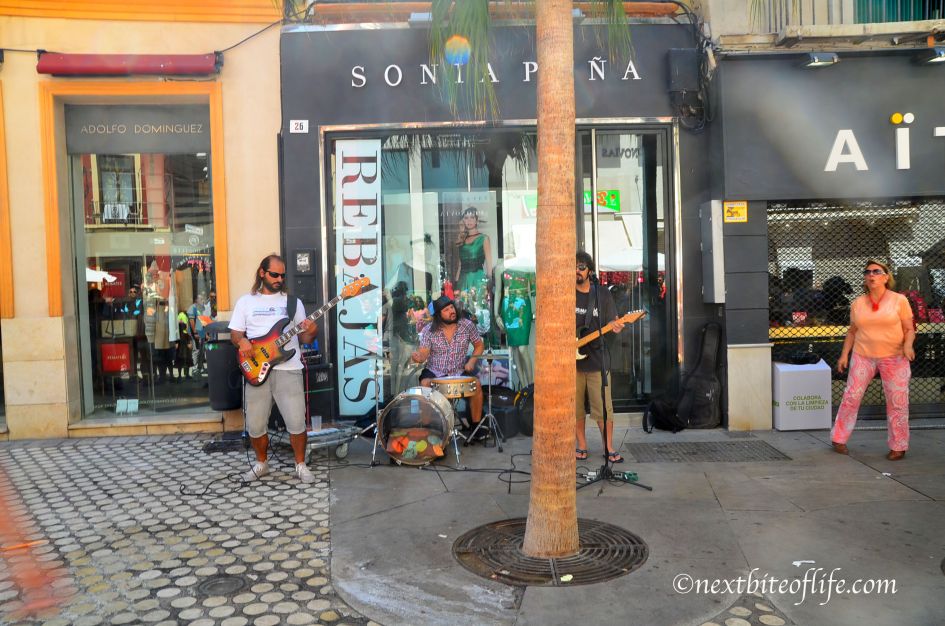 A Spanish rock band. They were actually pretty good. That woman was dancing so giddily. I think she might have had a few… 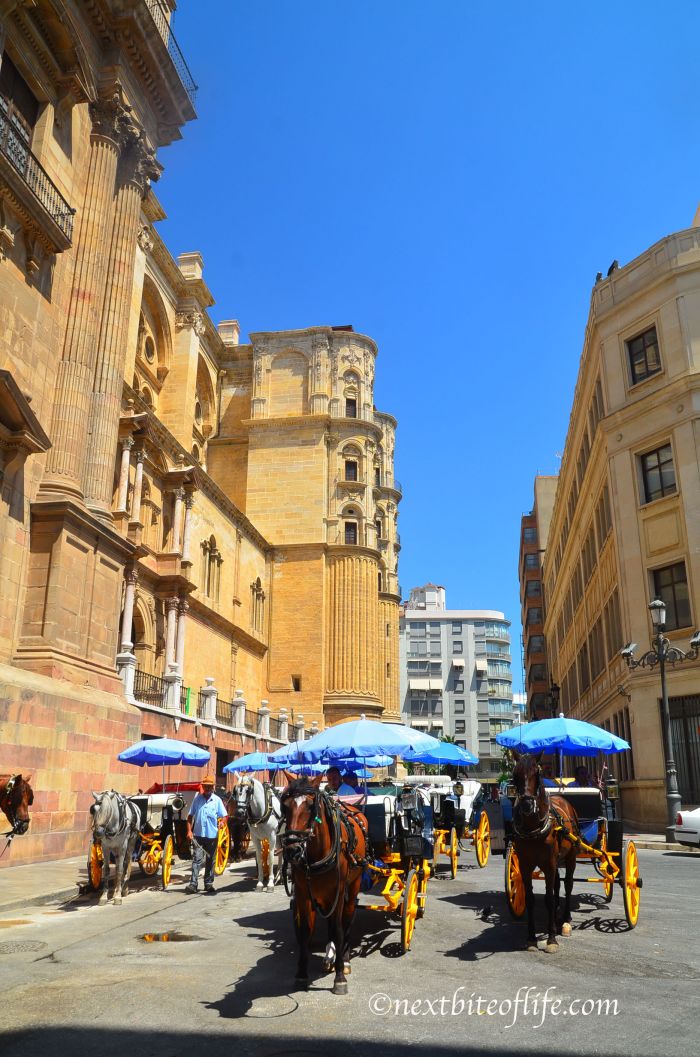 There were horse carriages to ferry you around. 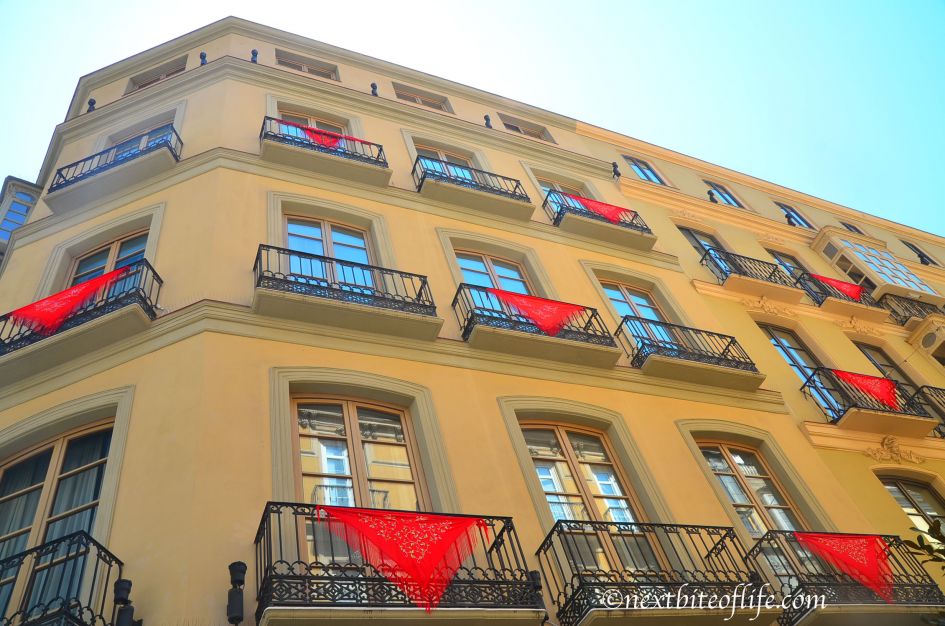 There were also free bullfighting shows (Correa) at the Plaza del Toro. We attended the grand finale bullfight on the last day of the Malaga Feria with mixed feelings. You can read our feelings about traditional Spanish bullfighting here.

How about you? Have you been to any feria or festivals? Did it live up to your expectation?  did you party like it was 1999?