Matador Versus Bull At The Corrida ( Bullfighting Sucks! ) 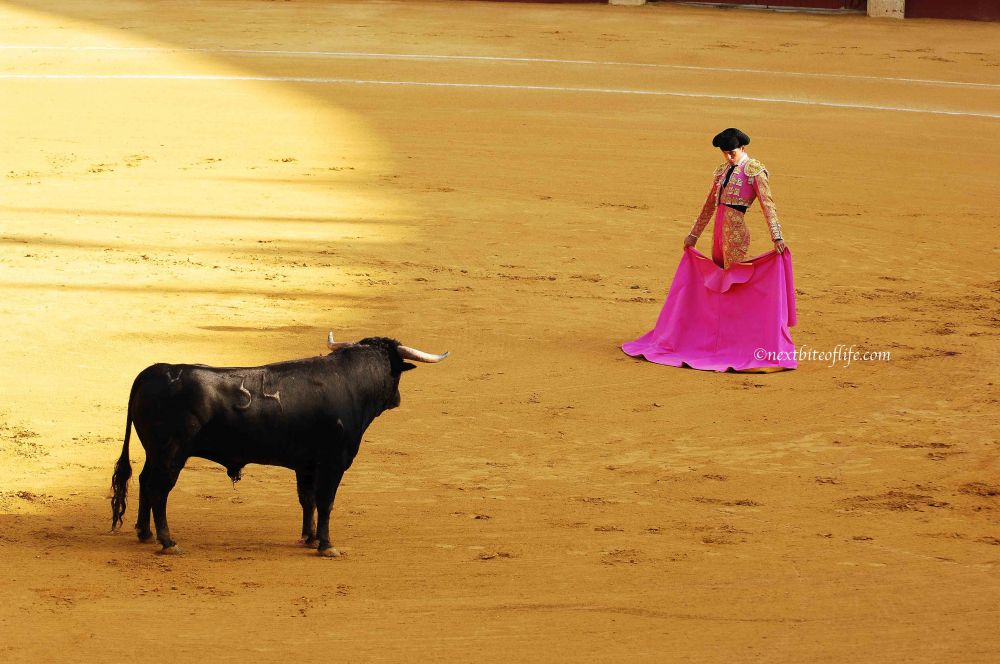 Bullfighting Spain. Matador and bull sizing each other up

Matador – 1, Bull – 0. As part of the Malaga Feria, there were free events throughout the city. One of the these was a chance to see a Corrida, traditional bullfighting of Andalucia. This was offered over 4 evenings. We went on the last night. I have seen bullfighting in Mexico City, when l was younger..much younger. This was my husband’s very first one, and he wasn’t too eager to go. I sort of insisted. The chance to take pictures finally convinced him to go. Is bullfighting legal in Spain? Unfortunately yes :-(.

I have to admit that l enjoyed the ones l have been to in the past. I was always one of the very few people rooting for the bull! Looking back, l guess l was lucky l didn’t get my ass kicked. It seemed a lot more even then too. It was just the matador and the bull.

There were maybe a couple of clowns in barrels to distract the bull when things got hairy. It was more of a fair fight, and l have seen matadors tossed about like dish rags and get gored pretty badly. It’s amazing that despite the number of bullfighting deaths, it continues till today. 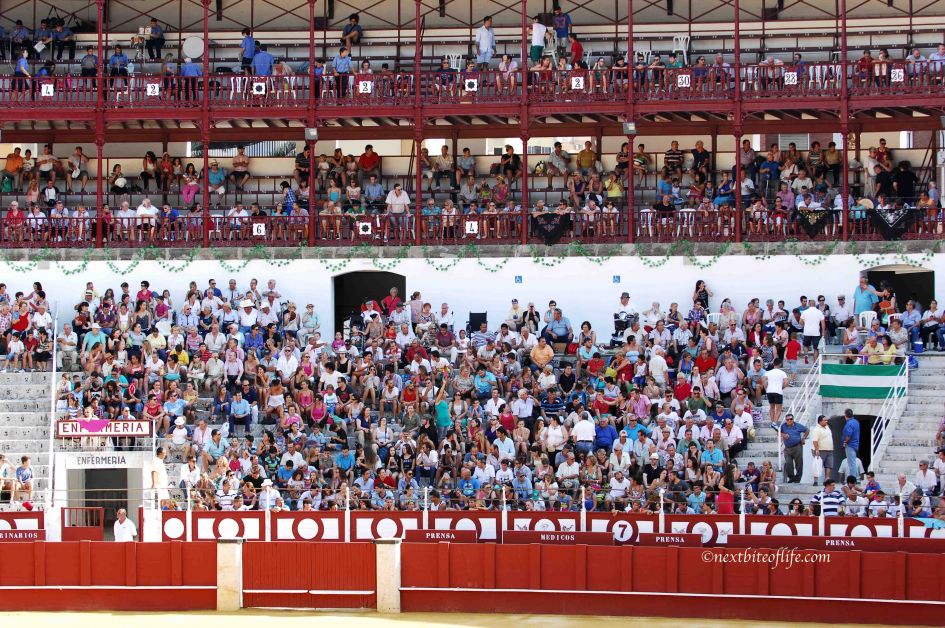 The arena about forty minutes before the start. It got packed! 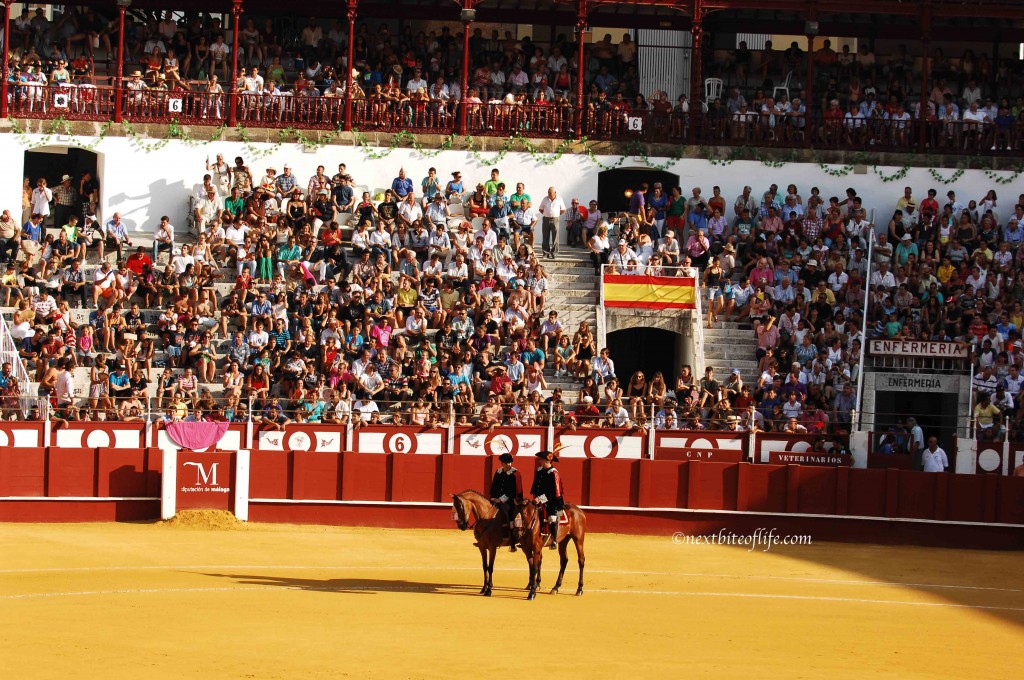 Bullfighting tradition in Spain is alive and well. There is progress being made though as some Spanish cities have banned bullfighting.

Things have certainly changed since then. There were ten matadors for 1 bull! 10!!!! Talk about overkill! Plus they had these things l called a “hide behinder”. This is basically a flat panel that the matadors can hide behind, and that the bull horns can not penetrate. It was quite disappointing.  The Plaza de Toros (La Malagueta) is where bullfighting in Malaga takes place and it was full that day.

We got there about an hour before the start, to get good seats. It started right on time at 7PM. First the arena was hosed down with water, probably to cool the sand down a bit as it was still quite hot. Next, the matadors came out, preceded by two men on horses. I’m not sure who they were, but they were dressed all in black. Maybe they were the big kahunas, the experienced matadors. The matadors practiced with their capes for a bit, that was quite cool to see. 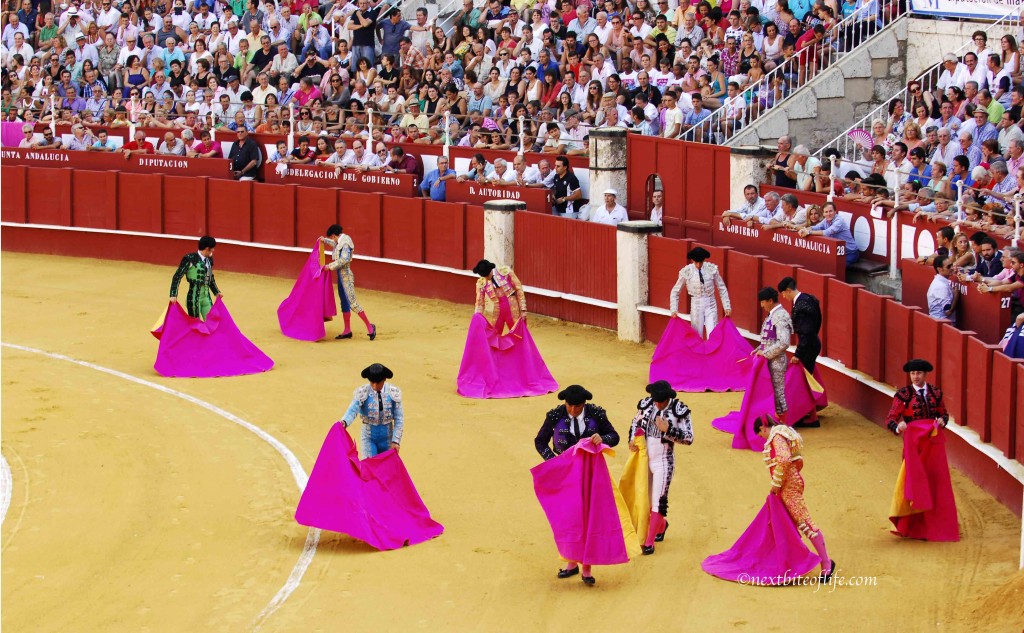 Matadors getting prepped with their bullfighting capes for traditional Spanish bullfighting in Malaga. The one thing you notice is that the capes are not red, but rather crimson in colour, a departure from the old days when they were blood red.

The star of the show came in shortly afterwards. It was a bull stamped with the number 34, and it was quite mad. It ran all around the arena, and then chased the matadors as they taunted it. The female matador was the one who had the most interaction with that bull. I must admit she was quite brave, as she had the bull within like 3-5 inches from her at times. Once, she got herself in a bit of trouble and was on the ground.

Was l hoping she would get gored? Abso – freaking- lutely!, but l am wicked like that :-) . Unfortunately, within seconds, the other matadors were there to save her :-( . I do believe there is such a thing as bullfighting art, but l saw none of it today. 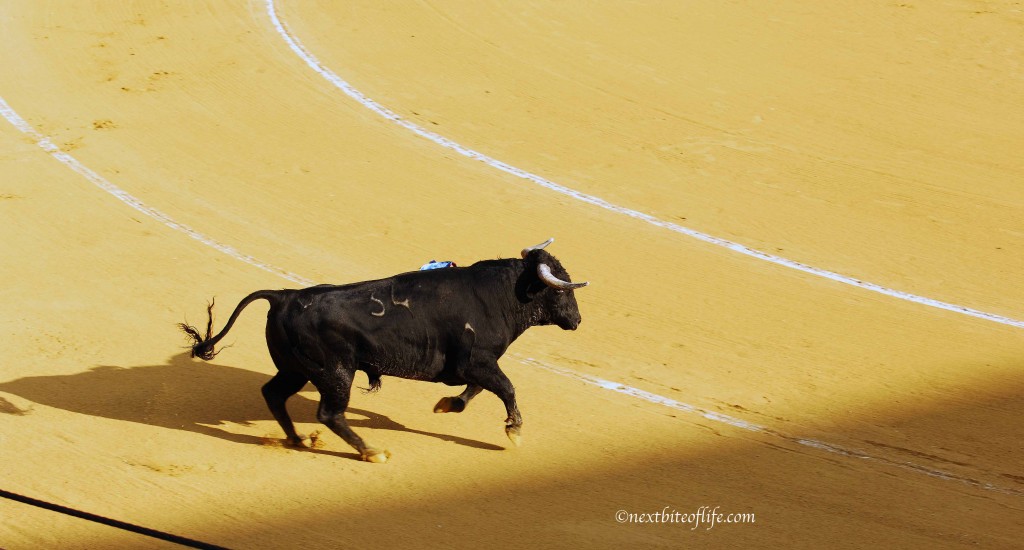 There is bullfighting in Seville too, but we did not attend any. We find it disturbing. This bullfight in Malaga was more than enough. 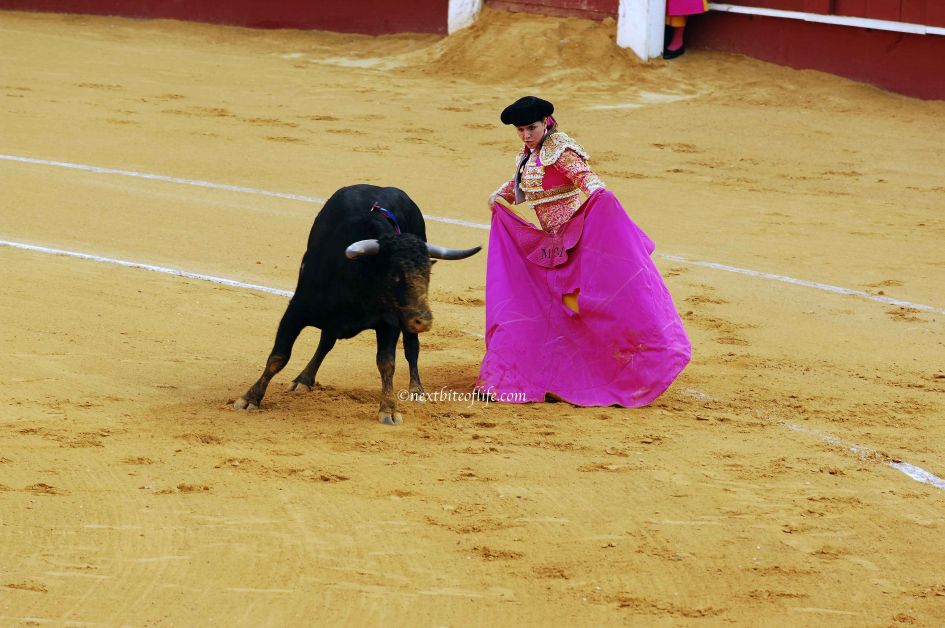 Spain bullfighting – the matador about to get in a scuffle with the bull after taunting it with her bullfighting cape. the bullfighting vest is quite colourful.

At this point, the bull was actually winning and l hope it would remain so. After so much taunting, it was nice to see the bull get the upper hand and was able to gore the toreador a few times before her companions arrived to save her. 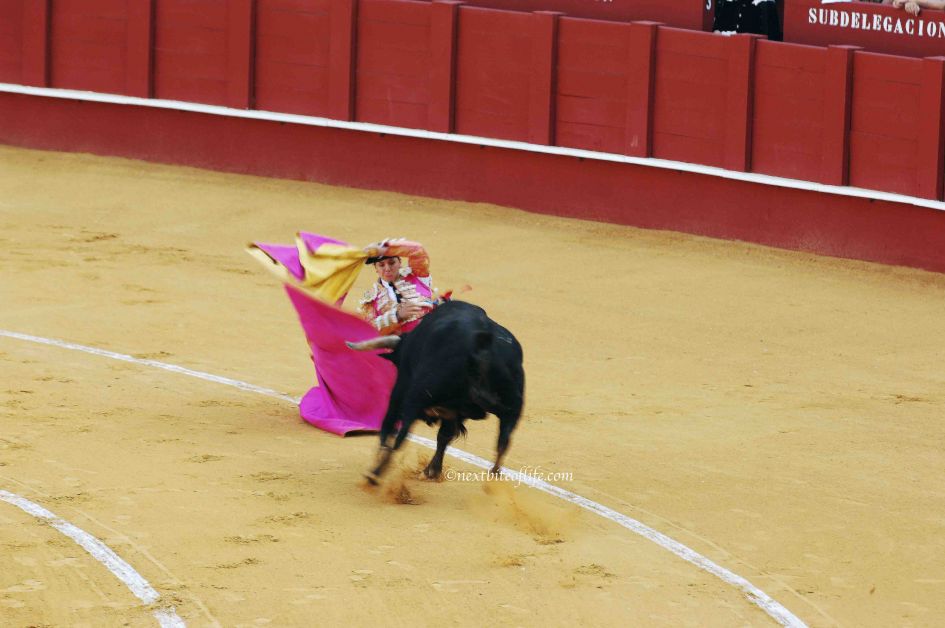 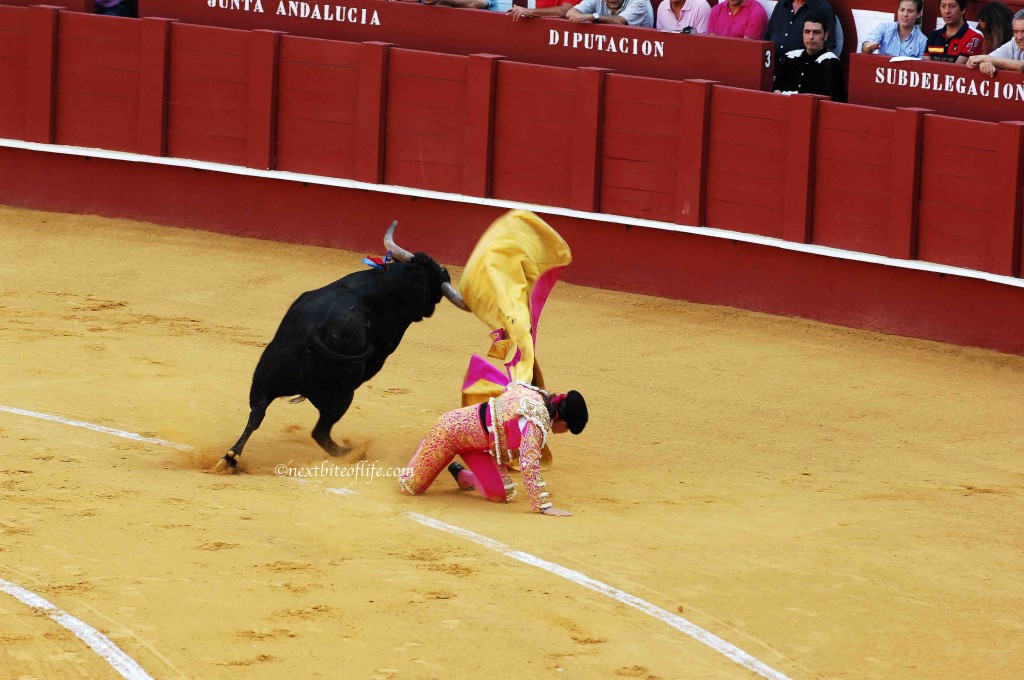 Down went the toreador. I was rooting for the bull to get its revenge.

FIND THE BEST MALAGA HOTELS FOR YOUR TRIP 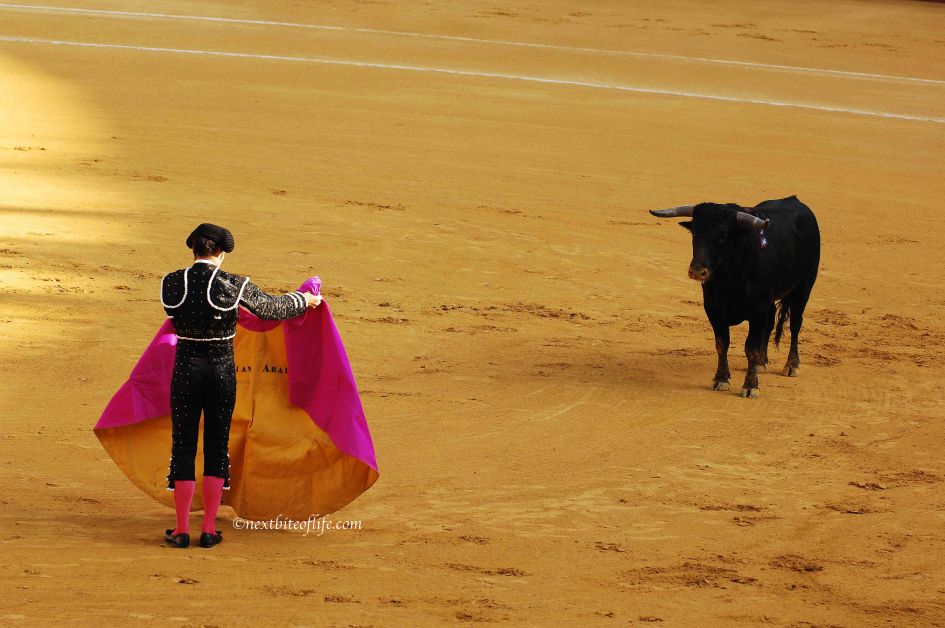 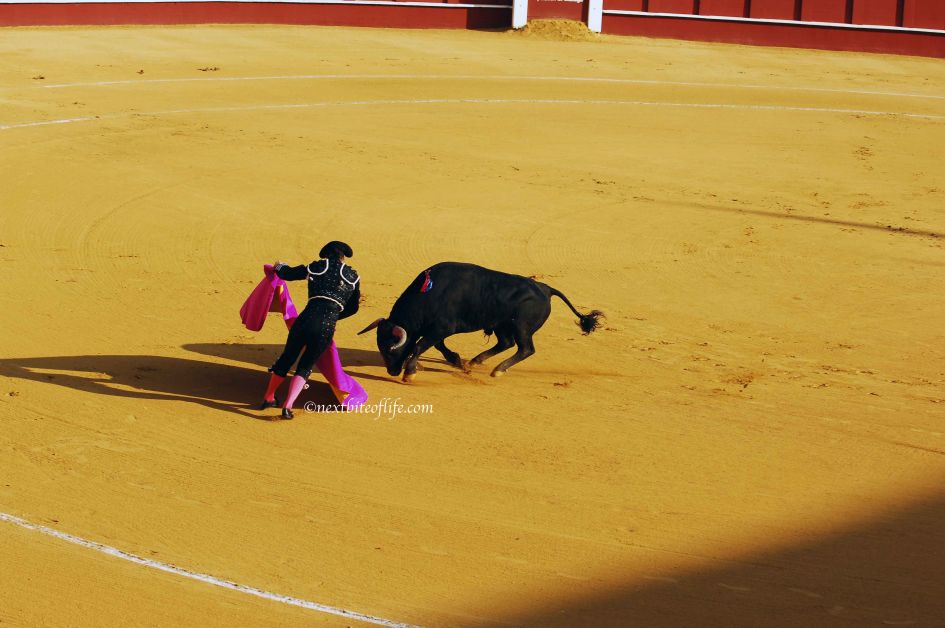 Toreador and bull at Spanish bullfight 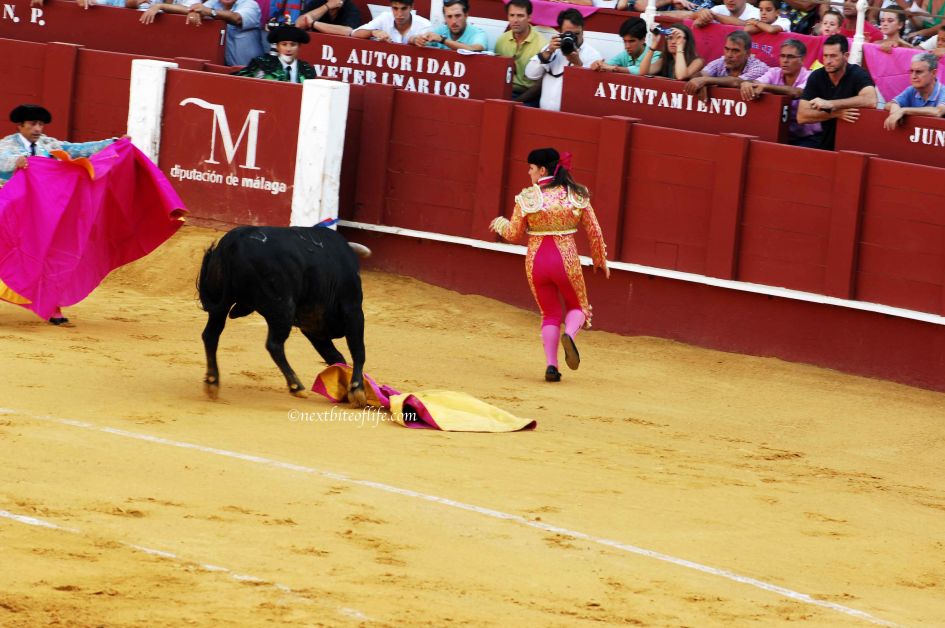 ..as she makes a quick getaway from the angry bull corrida, thanks to the help from the other toreadors.

There are reports of matadors being gored during bullfights on a yearly basis. Due to the much advanced state of medicine in general, it is rare when a matador actually dies because surgeries can usually be performed and lives saved, unlike the poor bulls. Over the past three hundred years, there have been a reported 534 bullfighting deaths, either in the ring or as a direct result of injury in the ring.

Moving to Spain? If so, make sure to purchase your copy of our guide with all the information needed to make your move stress free. Start enjoying your life in the sun sooner.

I remember sitting there, watching the bullfight, and thinking how l had changed. When l was younger, l enjoyed this bloodthirsty sport. At some point, l plan on doing a post or 2 on movies, and when you see my list of favorites, you will understand..no Harry met Sally in there!

That day though, l just sat there watching with a mixture of horror and almost embarrassment. It seemed pointless somehow. Do l wish it’s something that should be done away with? I don’t know. It is part of their culture, and most of the audience seemed to be enjoying it. I did notice several people leave before we did (most seemed like tourists who probably came because it was free just like we did).

After what seemed like forever, the bull being so tired, they started the piercings with these long sharp sticks. Each matador had one in each hand, held high and they would stab at the bull when it got close enough. Needless to say, the bull got very bloody. Finally, the female matador went in for the kill. I’m not sure if she was a newbie, or just nervous, but it took her 5 tries to finally down the bull with the blade. Each time, it didn’t go deep enough and the bull would shake it off his body. It was painful to watch. 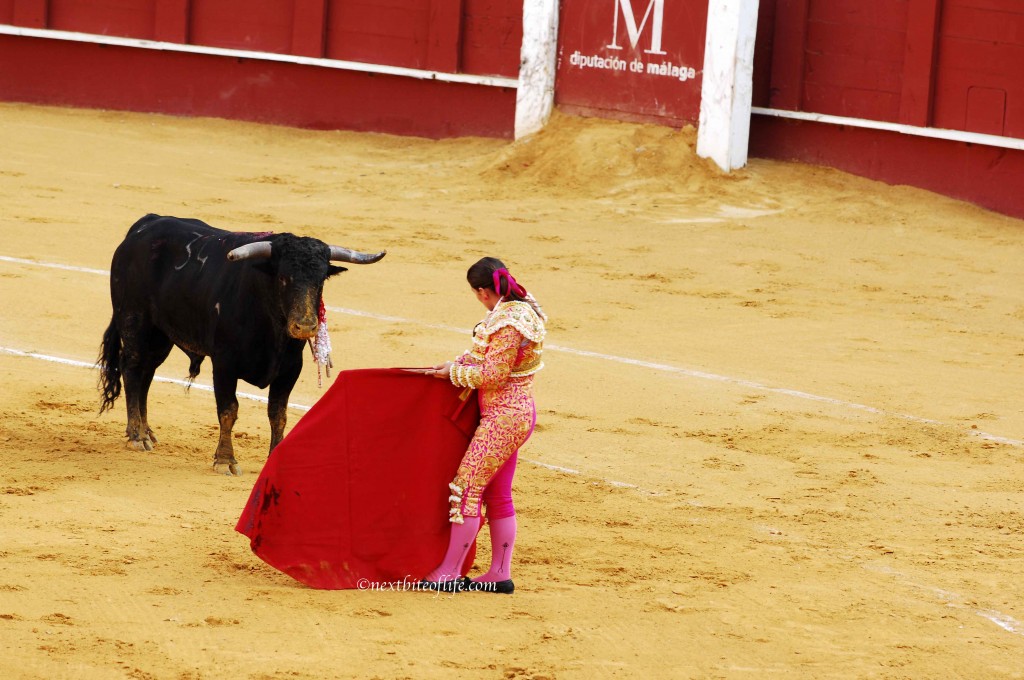 Is Bullfighting worth watching?

We left after that first bullfight. We just didn’t have the stomachs to see any more. Our humble opinion is that bullfighting is cruel. It is an old tradition that should be discontinued.  I have chosen not to show the more gruesome pictures of the bull. Would we every attend another corrida? The answer is definitely NO. We would never go to another bullfight.

How about you? Would you like to see one? or have you ever watched one? What do you think of it?