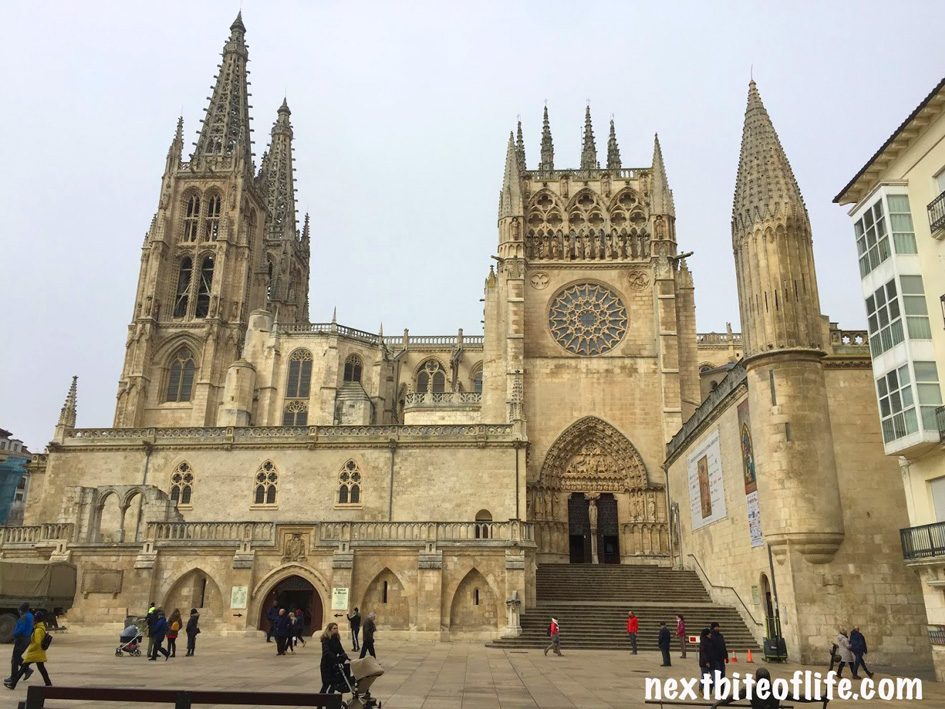 I’m not going to lie. I never even considered visiting Burgos before our recent visit to the north of Spain. Our original plan had been to visit Valladolid, just a bit south of Burgos, but thanks to the inconvenient bus departures, we decided to forego Valladolid and visit Burgos instead. Was it a good decision? It certainly turned out to be. Burgos did not disappoint. Here is your Burgos guide and reasons to consider the city as part of your Spain travels.

The first thing that hit us as we arrived at Burgos bus station on the foggiest night ever was the cold. It was freezing! Several degrees below zero. Our plans to see the city that evening were crushed as you could barely see in front of us. I had actually been a bit afraid as the visibility was near zero the closer we came to the city from the freeway. I assume the bus drivers are used to it though and we made it safely.

The next days turned out to be sunny, still cold (below zero), but we had scarves and gloves so it wasn’t too bad, and it was a nice change from Valencia weather. Upon seeing the city in the morning, we decided to tack on an extra day to our trip, just like we had in Bilbao.

Best things to do in Burgos:

Looking back, I would have added even one more day to our trip as we didn’t get to do everything. This just means we have to return l guess :-).

Nothing to say except WOW! We were both simply blown away. Often touted as one of the best Cathedrals in Spain, I can without a doubt say that l agree wholeheartedly. I would even go as far as to say the very best. This UNESCO World Heritage Site simply outshines the Seville Cathedral which was until now my favourite.

Having lived in Seville for two years, I was a bit biased but l grudgingly admit that the Burgos Cathedral is simply amazing. Gothic architecture at its best. It’s a classier, posher version of the Seville Cathedral if that makes any sense. After seeing so many cathedrals over the years, and being somewhat jaded, I’m very glad that we decided to tour this one.

The Burgos Cathedral is one the many stops along the Camino del Santiago pilgrimage and so we ran into lots of people walking the route. In fact, we were not able to stay for the added night at the same hotel because there were many journeymen scheduled to arrive at the hotel so we had to find another.  The cost of entry was €6 per person for this self guided tour and totally worth it. The fact that it was off season meant that we were free to linger and actually see the artefacts. There were few tourist groups, but certainly nothing compared to the summer times.

So close, but yet so far. Both the hotels we stayed at were within walking distance of this enormous museum but unfortunately, the full day we had was Monday, and of course they were closed. From what l’ve read of the museum, it is indeed worth visiting. Just make sure you schedule accordingly. Within the confines of the museum, you can find the story of human evolution. A whole floor is devoted to Charles Darwin and his theory of evolution. Fossils, thousands of years old (over 8,000 years) discovered in the towns nearby are on display. There is also a shuttle bus that can take you to the discovery site in Atapuerca. 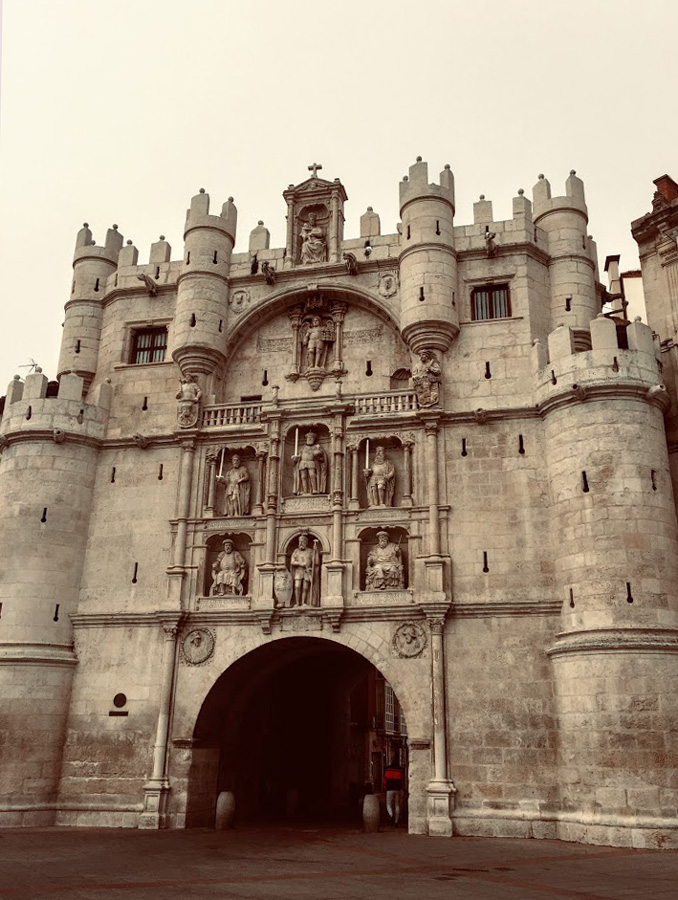 During the middle ages, Burgos had a total of 12 medieval doors and the Arco de Santa Marita is one of them. The interior holds temporary displays of art, a huge mural from a famous artist who was born in Burgos by the name of Jose Vela Zanetti. The arc was rebuilt by Roman Emperor Charles V in the 16th century and the faces on the arc are important dignitaries like the founder of the city and the Castilian knight El Cid.

Leading to the plaza El Cid and the old town, this beautiful, vaulted arch bridge reminds me of many in Valencia. It’s believed to have been standing since the 13th century, and one of the twelve bridges in the city. The Arlanzon river below has all but dried up. A picturesque spot in the city, especially at night.

At the end of the bridge stands the statue of El Cid. El Cid was a very famous warlord with a rich and complicated history. A Burgos born man, he rose up to become a fearless fighter who ended up ruling the kingdom of Valencia till his death in 1099. His wife actually succeeded him as the ruler of the kingdom for three years before she was forced to surrender. I find his history fascinating. If you have time, visit his hometown of Vivar, just a few kilometres from Burgos city where everything is dedicated to the fierce warrior.

This gorgeous tree line-wide promenade is a lovely spot to sit and people watch. There are restaurants all alongside and it leads to the Arco de Santa Maria. I’m pretty sure it’s where the “old monied” people reside. It’s just that elegant. It was lovely sitting on the bench and watching kids on the carousel.

One of the main squares in Burgos. Like all the other ones in Spanish cities, this was yet another beautiful spot in the city. Filled with locals and tourists people watching or having drinks on the terraces and surrounded by colourful buildings in the old town of Burgos.

A stunning vantage point from which to see the city below you, and one of the most popular attractions. The views of the Burgos Cathedral from above is pretty impressive from the images we’ve seen. We didn’t climb up the steep hill. Next time we might attempt it or just take a cab (didn’t know that was an option then 🙂 ). 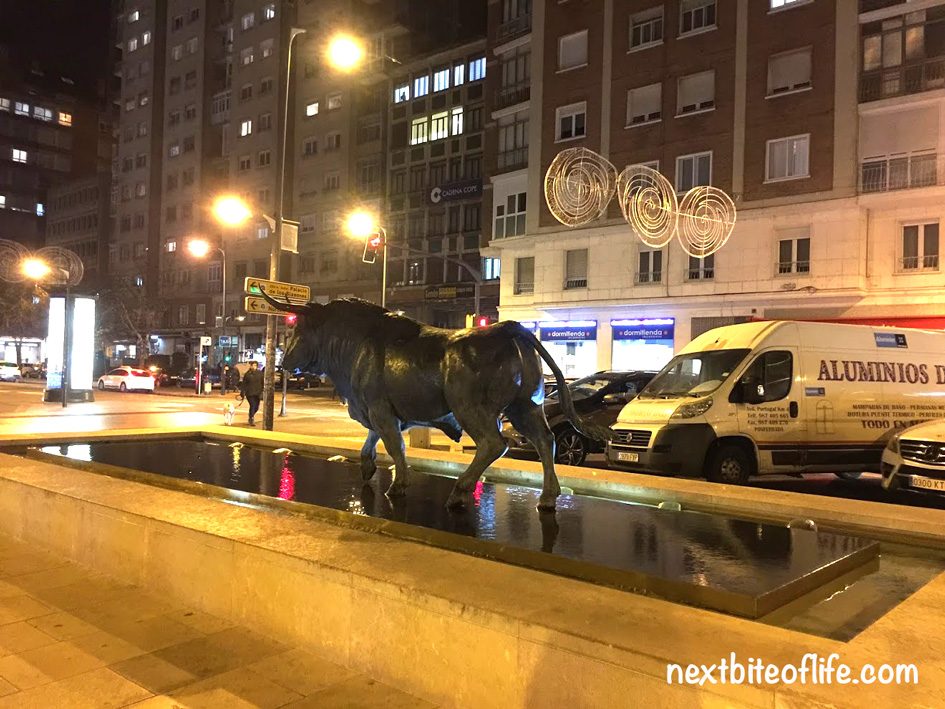 Could l live in Burgos? Yep! I think so, even though l would hate the winters (my bones would ache too much). Burgos is a great big city with a vibrant old city centre that was larger than expected. The prices were reasonable and the whole city was clean. If you’re short on time, you can see the highlights of the city on a day trip from Bilbao. The bus ride was under two hours and we used the Alsa bus company, one of the biggest in Spain.

Where to stay in Burgos:

Our first night was spent at the Hotel Forum Evolucion, located just a stone’s throw from the museum and less than few minutes walk from the bus station. We really liked it, and it was centrally located, about a two minute walk from the museum of evolution. The room was quite nice and is mid range in price. We paid just over €41 per night. A very lovely bottle of wine awaited us, a nice touch indeed. They also offer breakfast for an additional eight euro per person which we declined. There is a cafeteria just down the street where you have a huge selection of pastries, sandwiches and coffee for a fraction of the cost.

The second hotel was also nice, but maybe one star less. It is quite close to the other hotel but l wouldn’t recommend it. The staff was nice, but the bathroom had no ventilation (mild mould) and it was just okay for the night. There were quite a few backpackers and l think the price was fair for what you got.

Some of the other places we didn’t get to visit include the Burgos castle, the monasteries, and some other beautiful churches. All in all, there is plenty to see in this fabulous capital of Castile. I think this might be one-time l would recommend having a rental car so you could visit the places outside of the main center. You can compare prices on this site to find the best deal.

The food in Burgos was very good, something to be expected in the whole of Spain. Tapas are of course a staple, so l don’t have to tell you we had plenty. One restaurant in particular that we can recommend is La Casona, located in the old center. We actually ate there twice because we have no problems returning to places we enjoy.

How many days in Burgos to visit?

These are just some of the things you can do in Burgos. I was surprised that Federico liked the city as much as he did. The people were very friendly, and seemed to take pride in the fact that Burgos was colder than Bilbao (something that surprised us because it was not as far north). I think a total of at least two full days would be fine to visit the city. Three days would be ideal. We intend to come back as we both really enjoyed our time there.

One thing is clear to us now, we have been ignoring our own backyard for too long and we are making up for it this year as much as we can. This trip, which has included a stop in Santander, has definitely sparked our interest in visiting other gorgeous parts of Spain. My Spanish is improving and l’m getting more confidence daily. Yeah!!!! 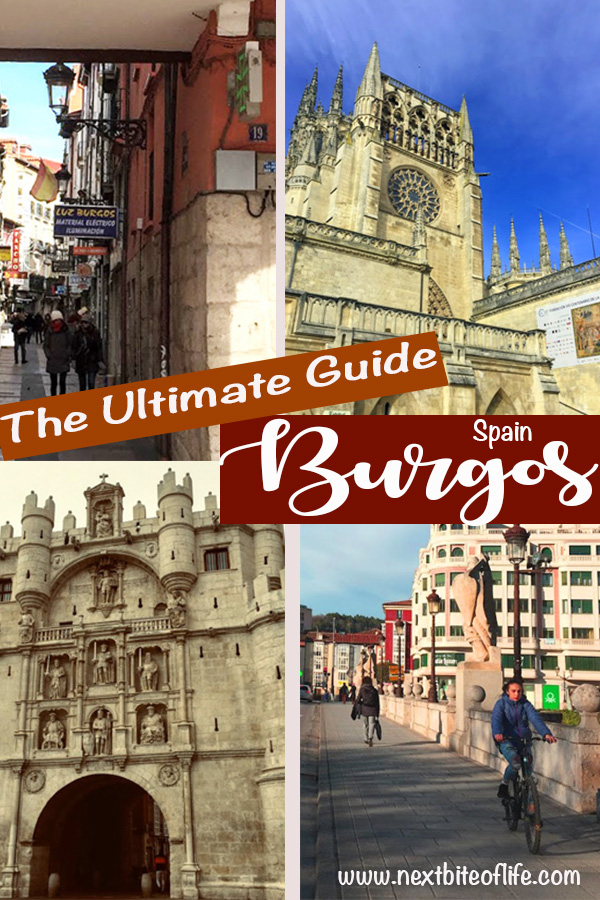 Have you ever been to Burgos? Would you consider adding it to your Spain itinerary or is it too chill for you?