Happy Experience Aboard The Royal Yacht Britannia in Edinburgh Scotland 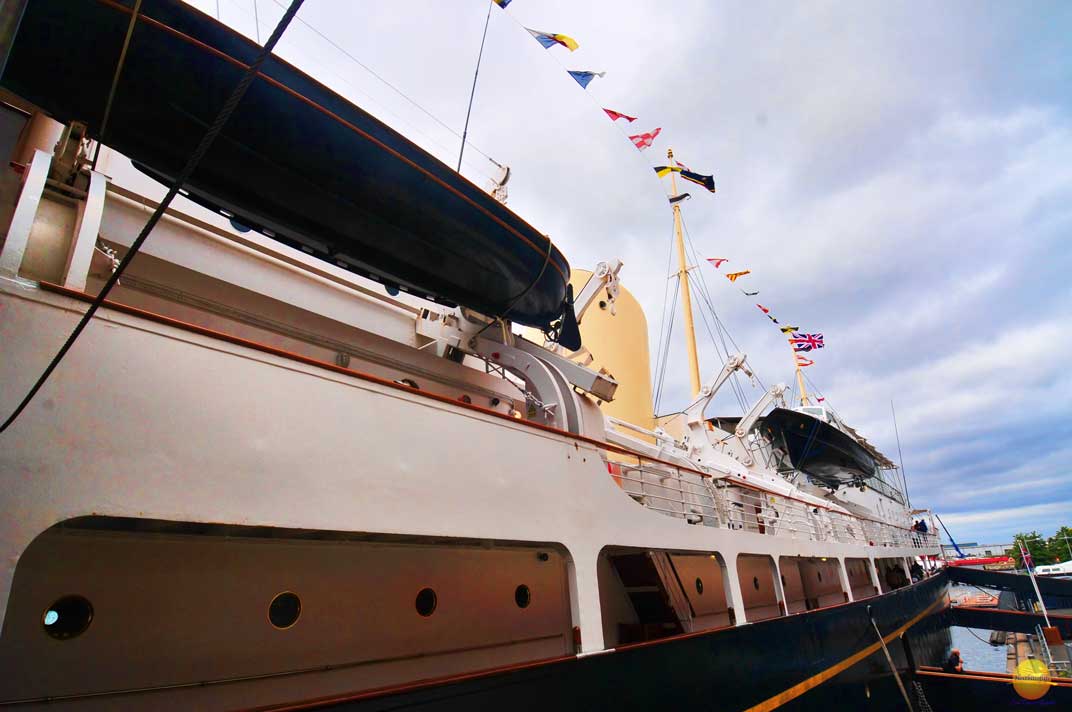 What to do in Edinburgh? Visit the royal yacht.

Royal Yacht Britannia is the now decommissioned yacht of Queen Elizabeth II. It is permanently moored at the Ocean Terminal, Leith in Edinburgh. We got a chance to walk in the royal footsteps aboard the HMY Britannia on our recent visit to Scotland and it was definitely one of the highlights of the trip. The chance to explore this 126 meter royal home on the sea was too exciting to pass up and we were not disappointed by the glimpse into the royal life. 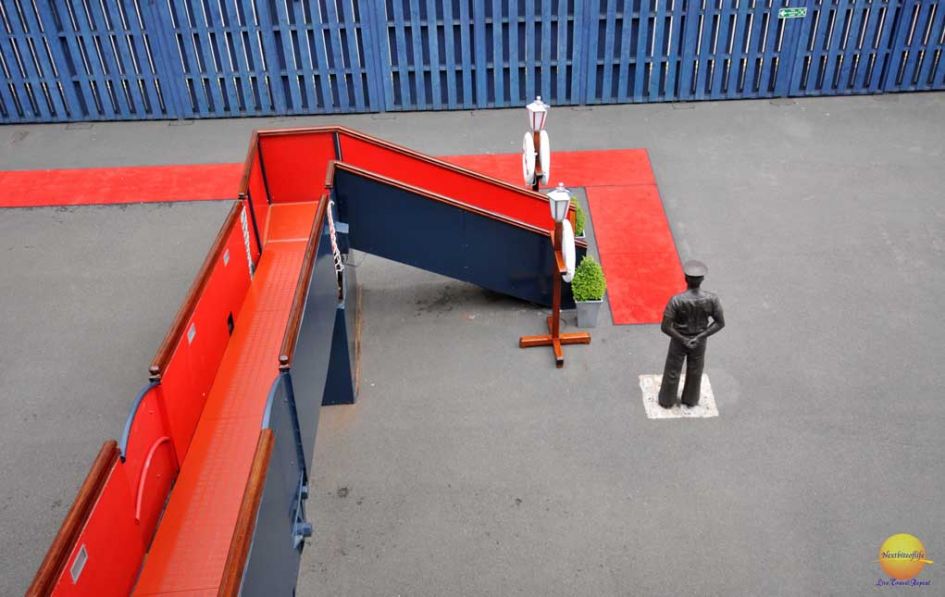 This is how the royals would have got onto the Britannica..a red carpet welcome! 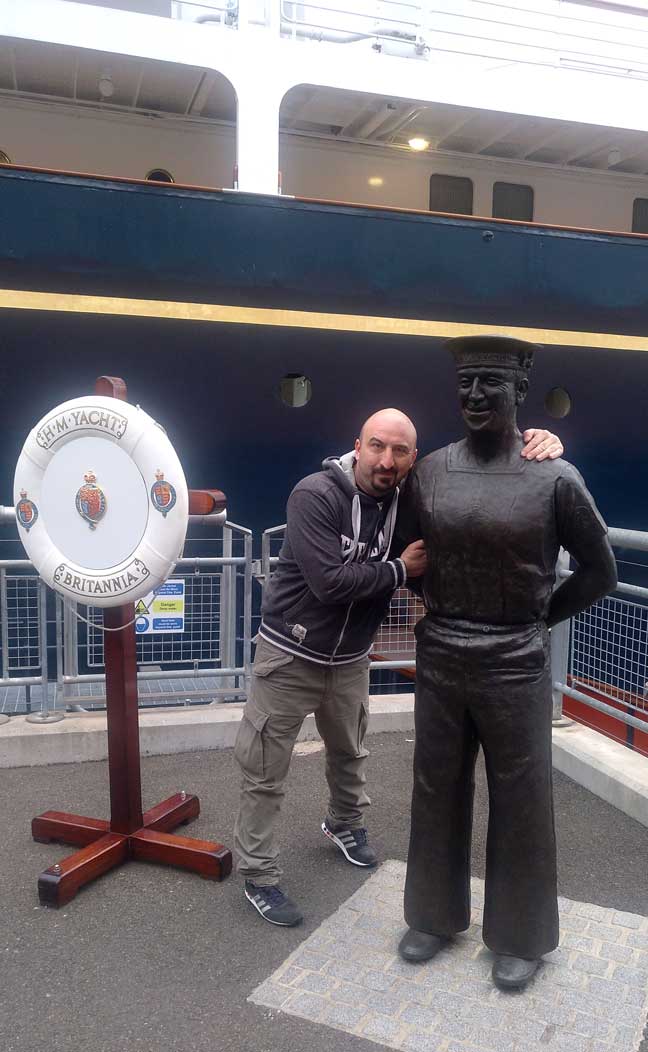 Palling around with the greeter :-)

Royal Yacht Britannia: Getting There

If you’re driving, you’ll be happy to know that there is free parking at the mall. You can take a taxi which would be an expensive option and will cost you about £12 so wouldn’t recommend that. The better option is to take the Bus number 22 which goes from the center to the Ocean Terminal in less than 25 minutes and costs £1.60.

We went via the Hop-On-Hop-Off bus  as it was one of the stops on the route and that is what l recommend as you can also see other famous attractions, thereby getting a bang for your buck. Once you get to the terminal, you are a bit surprised as you don’t see the yacht. It’s behind the mall! and is actually only accessible from there inside :-). Very enterprising of them actually.

There’s not really much to do or see in Leith apart from the Britannia. They therefore built the mall and attached the yacht to it so you have no choice but to window shop as you make your way to the top floor. It worked, we did a bit of shopping on our way out. There are also nice restaurants and cafes with the most awesome view of the sea, so we had a bit of lunch before setting off on our little discovery. 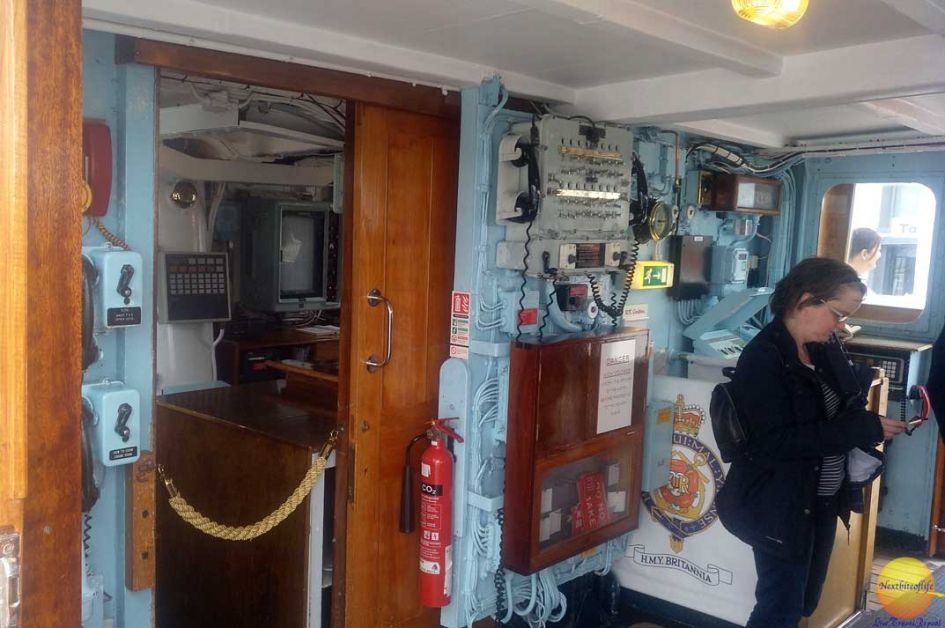 Imagine controlling all those doodads!

History of the HMY Britannia:

The Royal Yacht Britannia is also known as the HMY Britannia. HMY stands for Her Majesty’s Yacht.  It is considered Scotland’s best attraction and receives over three hundred thousand tourists yearly. The yacht was launched in 1953 by the Queen and was commissioned in 1954. In the event of a nuclear war, the yacht was conceived to be a refuge for the Queen and Duke of Edinburgh along the North-West coast of Scotland. It was also designed to be a fully functional hospital ship at wartime. It racked up over one million miles while it operated. The first place it sailed to was Malta!, our former home. 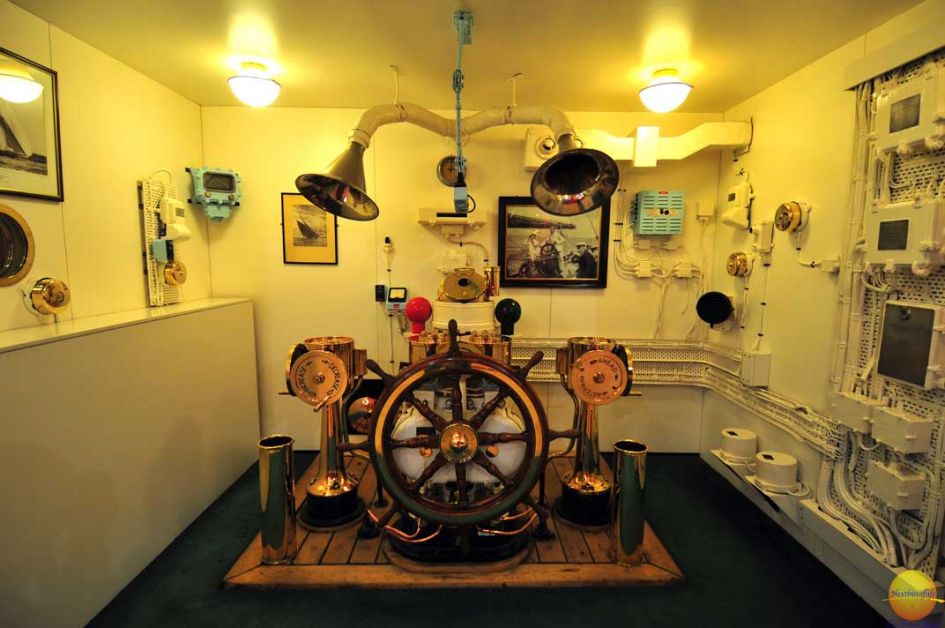 Engine room? I forget, but it looks like it.

The crew were volunteers from the Royal Navy while the yachtsmen were simply volunteers who after one year of service could be accepted as “permanent” if they chose. It was therefore common to find some with over 20 years of service. I would do it, lodging, food, and the chance to rub shoulders with royalty while sailing around the world? What’s not to love? Whenever the Royal Family were on the yacht, a troop of Royal Marines would accompany them as well. I think everyone would enjoy this tour as part of their visit to Scotland, especially when combined with Glasgow as most people tend to do. 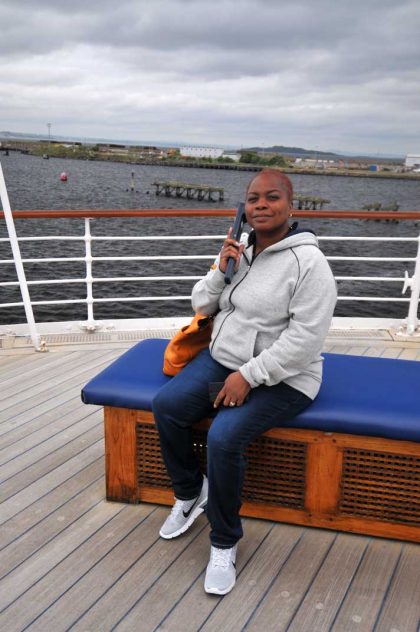 Paying attention to the audio on the royal deck. Another cold, rainy and windy day. Jacket was a new purchase :-).

This is great because it’s a self guided tour so it was at your own pace. Once you’ve paid the entry fee, you are given an audio handset which takes you through the whole yacht and you just key in the numbers as you approach the stops. We started off at the Bridge and saw among other sections including the royal bedrooms, crew’s quarters and a sparkling clean engine room. In my head, l had imagined some over the top, gold covered crap as far as the decorations, and l was thrilled to find it actually tasteful, understated, almost bland. Very refreshing! 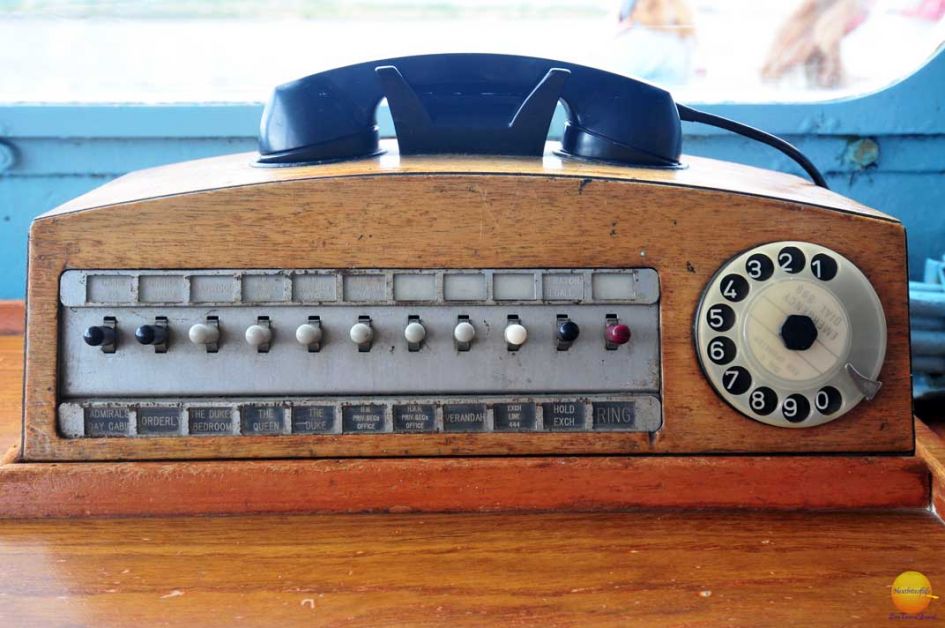 Imagine receiving a call from her majesty. Bet there was someone appointed to watching those buttons 24 hours a day.

I was surprised that the Queen slept on a single bed. I have to admit that l would have flexed my muscles and requested at least a queen size bed :-). Very simple room she had and l can easily imagine that she is just as fuss free in real life. I know she loves to tinker with cars and did as much during the war. 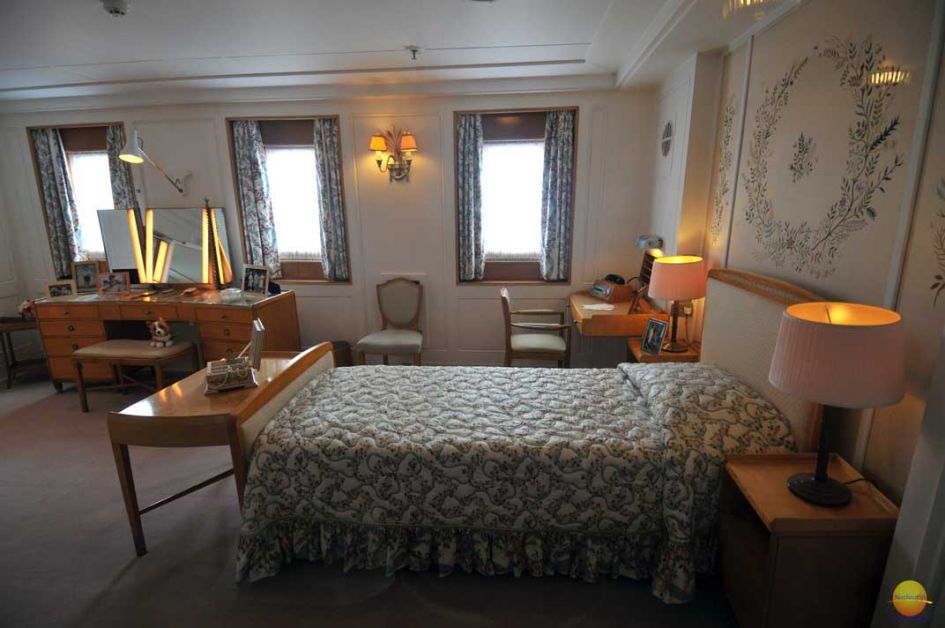 Very simple room. Fit for a Queen? Not so much in my opinion. The Duke’s room was next to it, and done up just as simple, but he did make sure to specify absolutely no embroidery :-). 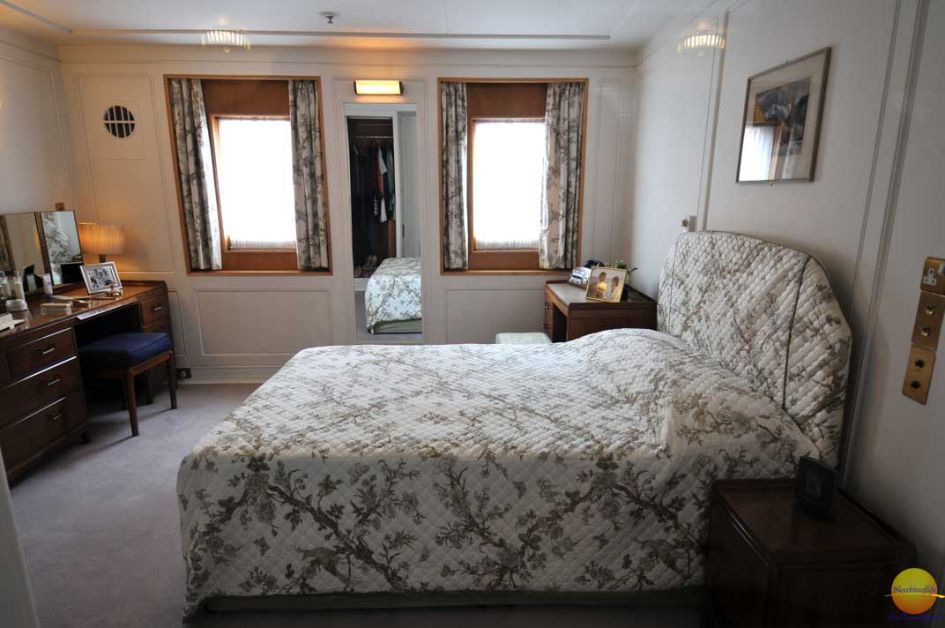 This is the honeymoon suite. Only one with a double bed.

Charles and Diana, Prince and Princess of Wales took their honeymoon cruise on the Royal Yacht Britannia. Other guests that have stayed in this room include the Presidents Clinton, Einsenhower,  Reagan and Gerald Ford. 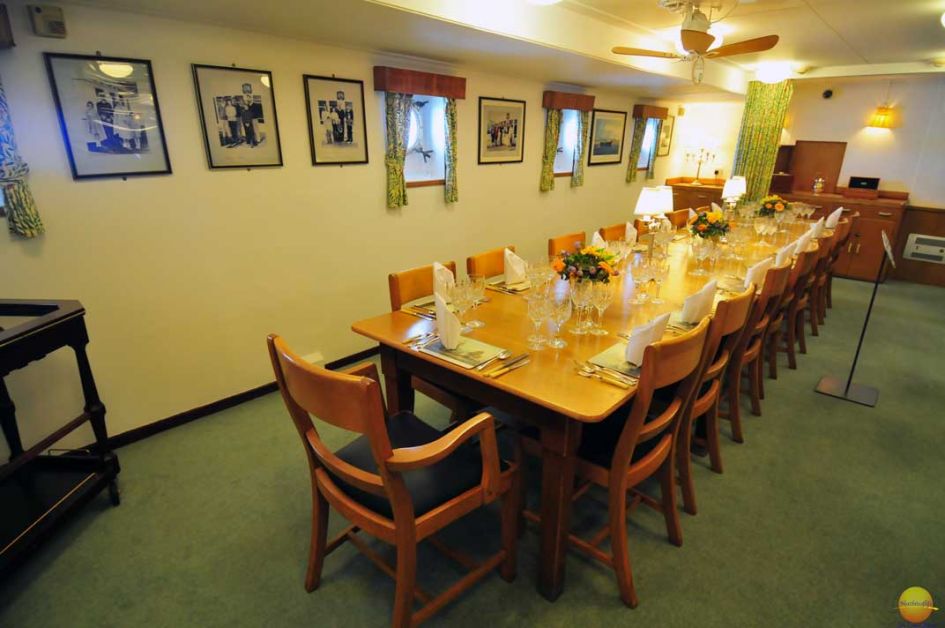 One thing you saw on board were plenty of family photographs, some of them signed. I get the feeling that the family really enjoyed life on board and they could let their guard down a bit which must have been nice. 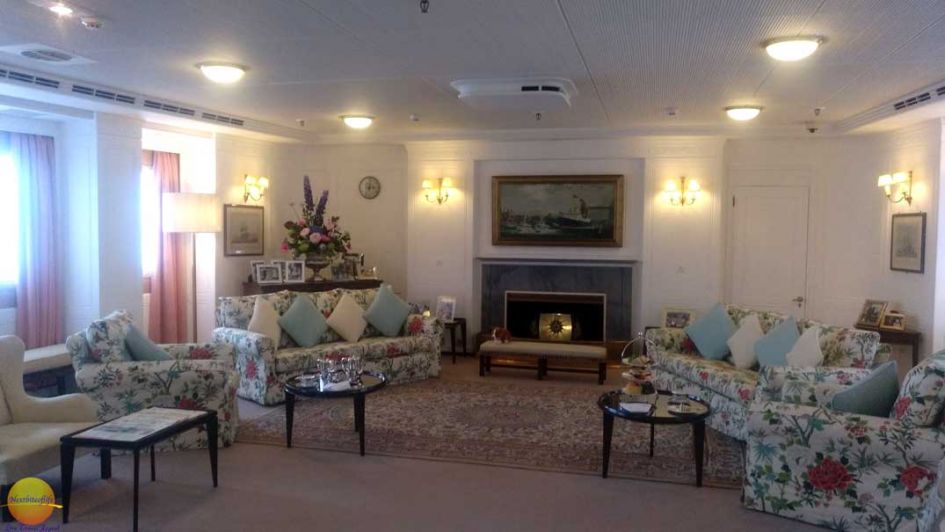 Nice and cheery even though l don’t like the flowery couches.

One thing l found funny was that the Queen had demanded a working fireplace in the parlor and was overruled. It was dangerous and would have required a full time person watching it so she had to settle for an electronic one. I wouldn’t have liked to be the one who had to tell her no! Off with his head!!! :-). This room opened up to another room and converted into a grand ballroom that could hold hundreds. 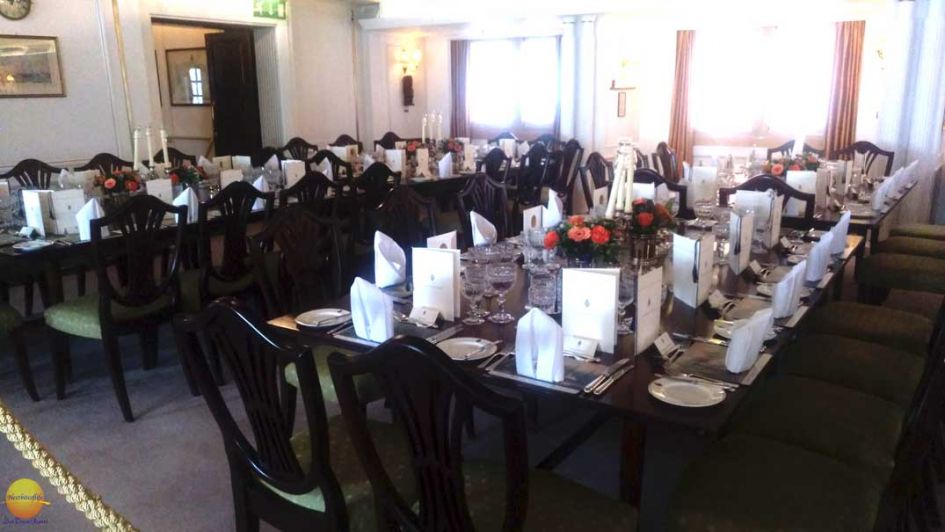 Just imagine all the most important men and women who have dined here. Their keepsake was the menu pamphlet which was quite fancy. 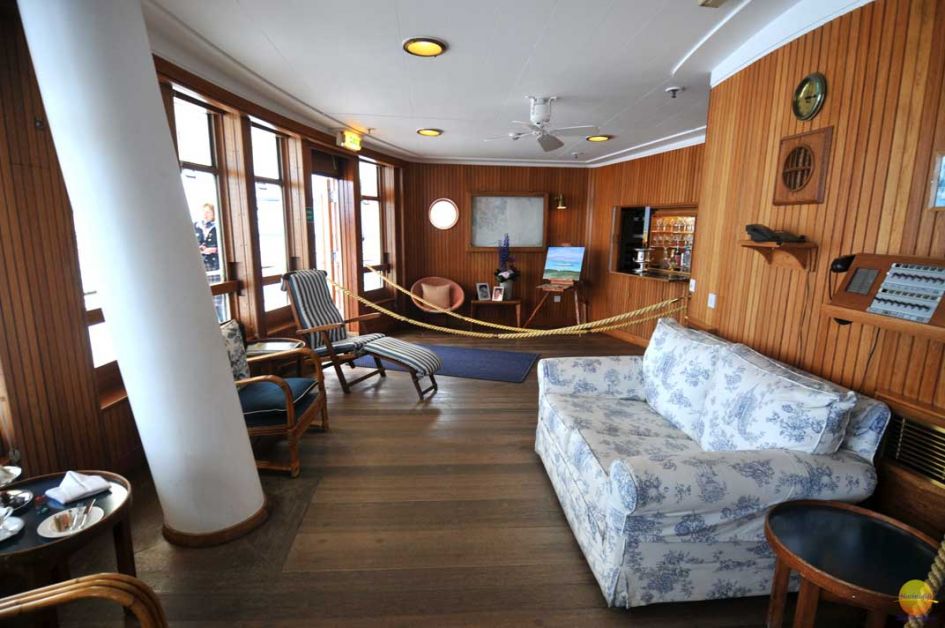 The lounge area. The painter wasn’t bad either. Workmen weren’t allowed to wear hats around their quarters to spare the royals from having to salute all the time.

Attached to the yacht was the Royal sailboat. Princess Anne learned to sail on it and was quite fond of sailing. I can imagine how freeing it must have been for her. 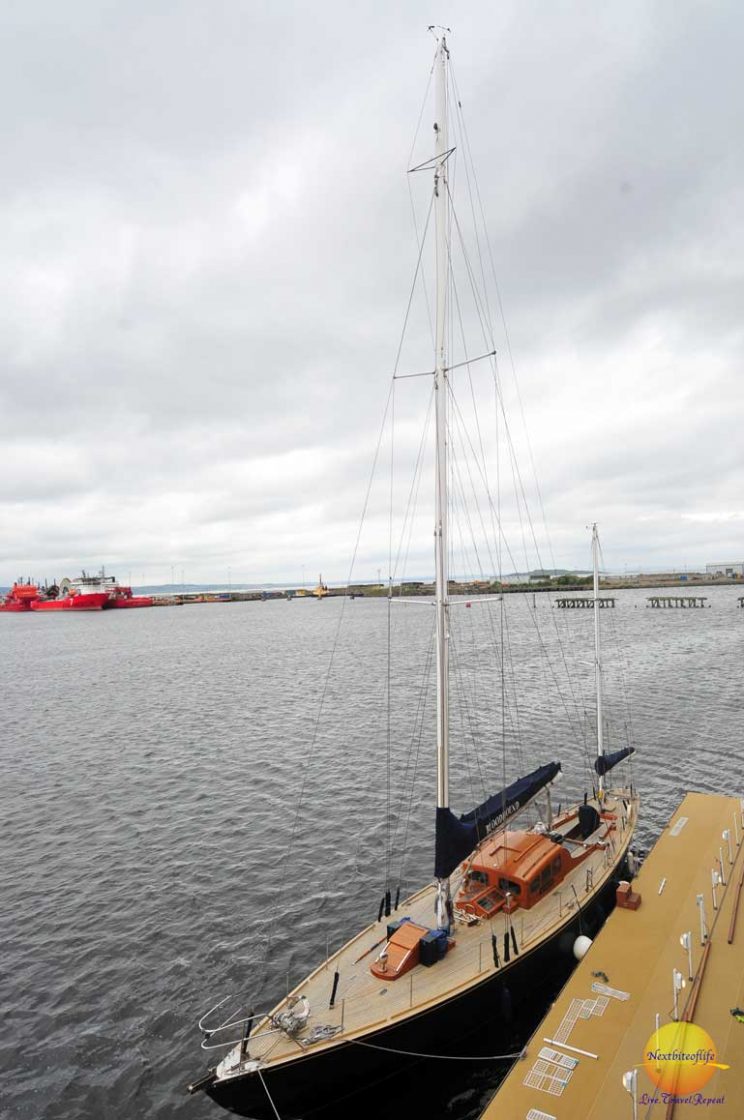 How nice it must have been sailing right alongside the big yacht. It’s good to be rich l always say :-).

The Royal Yacht Britannia also traveled with one of the royal cars, a Rolls Royce Phantom which was a bitch to get on and off from the audio files. 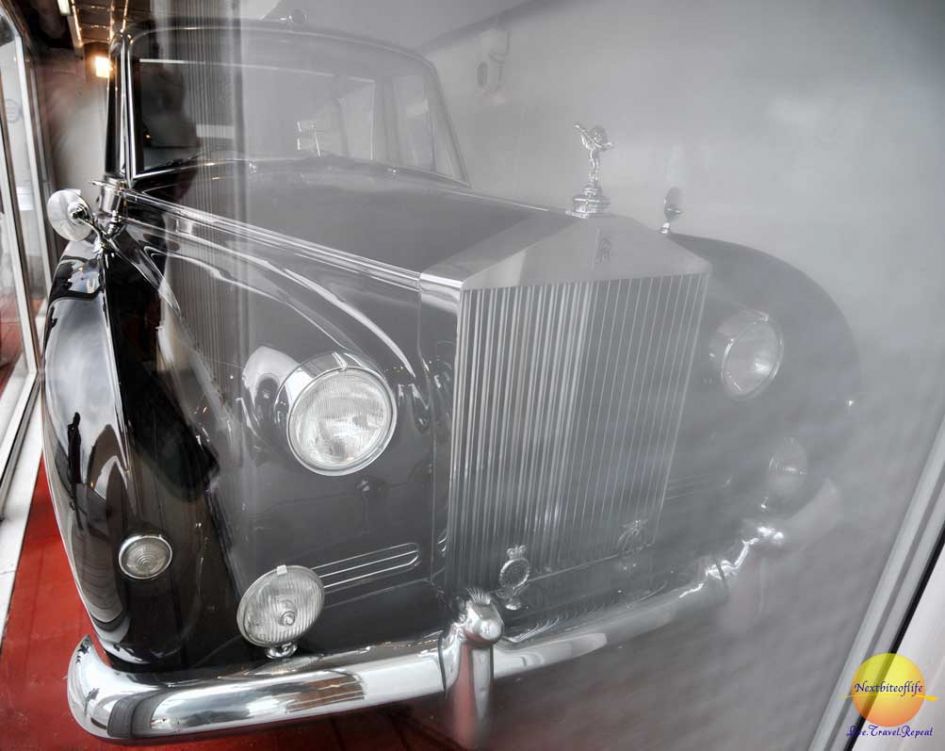 It was behind glass in the tiniest spot and must have been a right pain in the ass to disembark.

The crew’s quarters were on the bottom floor and they had enough to entertain themselves. I was also surprised that there was a full on laundry room with pressing machines etc. 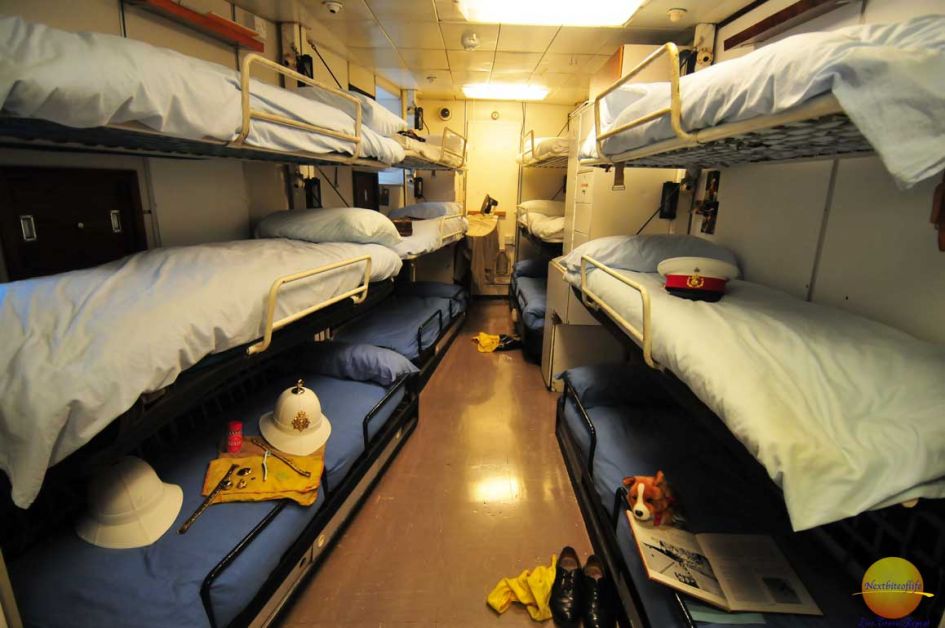 Bunk beds in the crew’s section. 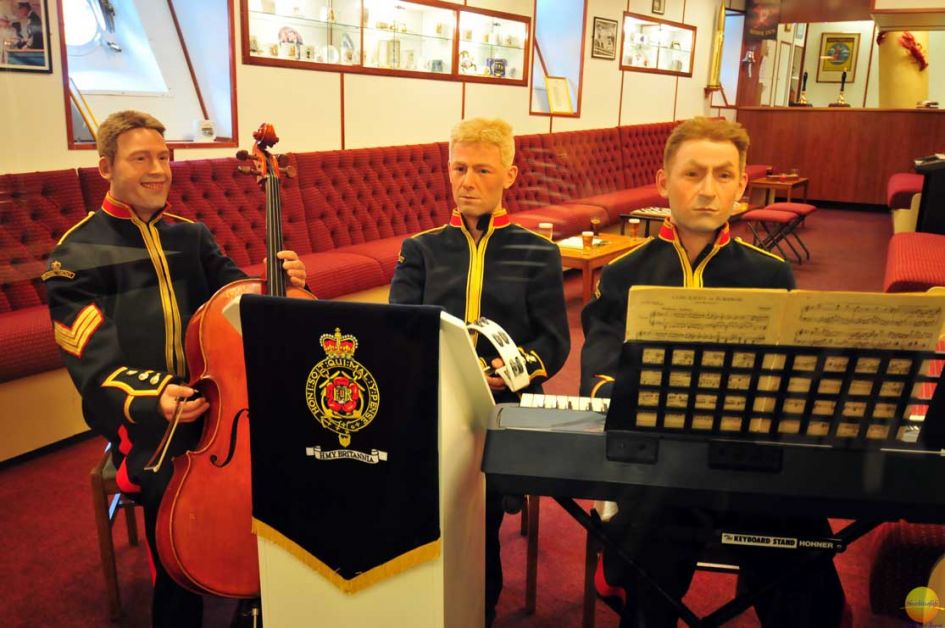 This scared me for a moment because they looked real and you just came up on it with no warning. It was a bit dark down there :-). 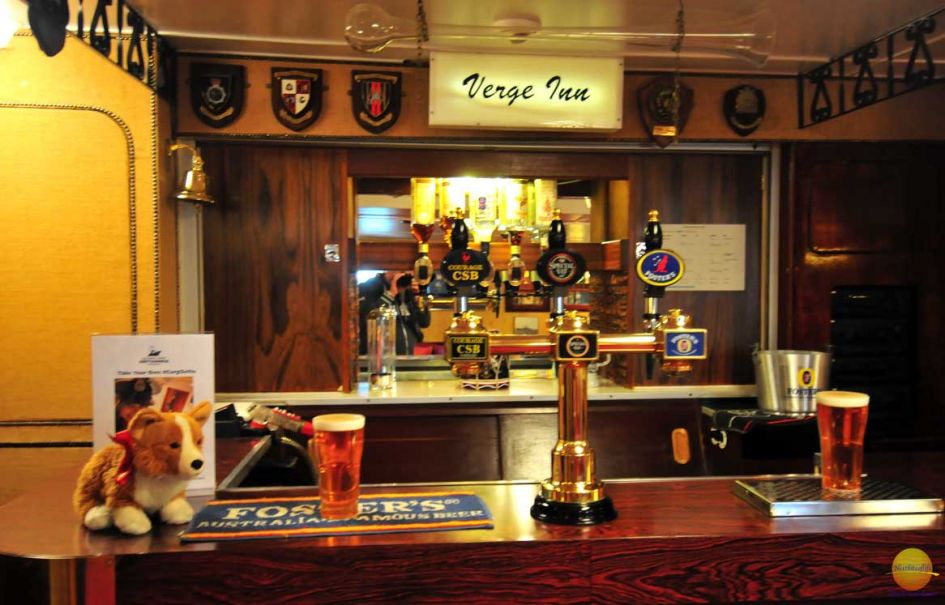 They had a bar too onboard the HRM Britannia. 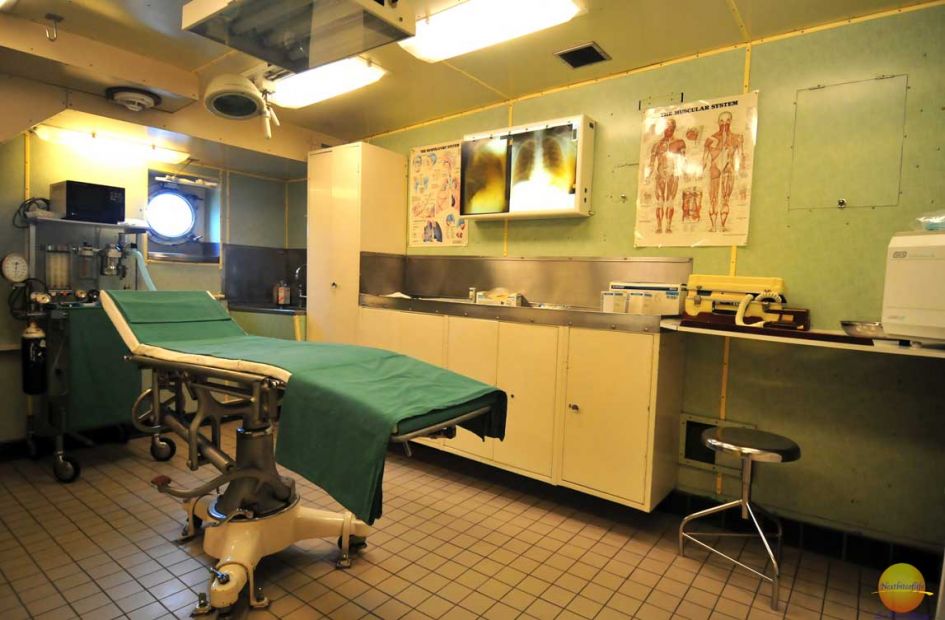 The operating room still has that hospital smell.

Should you visit the Royal Yacht Britannia?

Yes, yes, and yes. It was a fun afternoon and l really liked seeing how they lived away from the glare of the palaces. Underneath it all, they seemed like normal people who were doing the best with the lives they were born into. My favourite picture out of the hundreds l saw is this one. It’s obvious how much she loved and adored her kids. 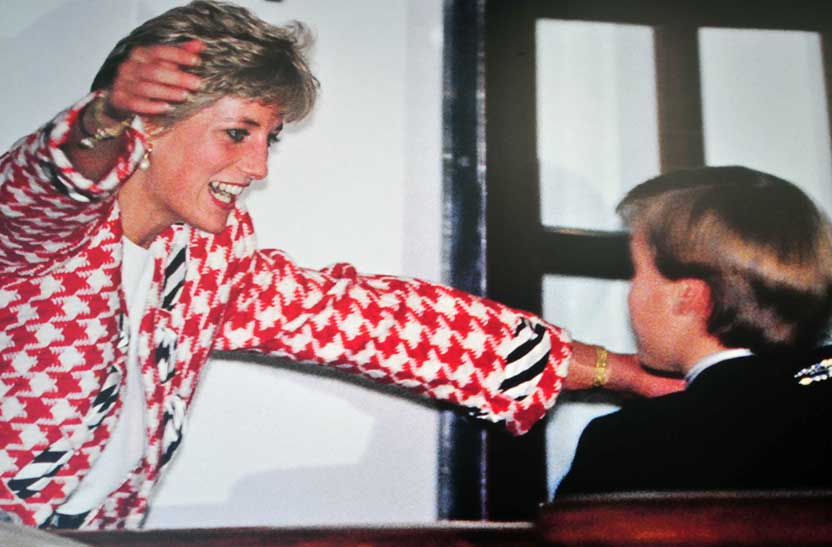 Going in for a hug for her older kid. Look how happy she looks. Look how much hair he had as a kid too!

There is also a really nice looking tea room there as well as Lego models for the kids to enjoy. If you visit Edinburgh, I think you should definitely leave an afternoon to enjoy this tour. You pick up little tidbits that make the royal family human.

Check out their website for other discounts, including elderly and service men discounts.

There is a lot of walking to be done on board so make sure you wear comfortable shoes. The ramps are also wide enough to accommodate wheelchairs. 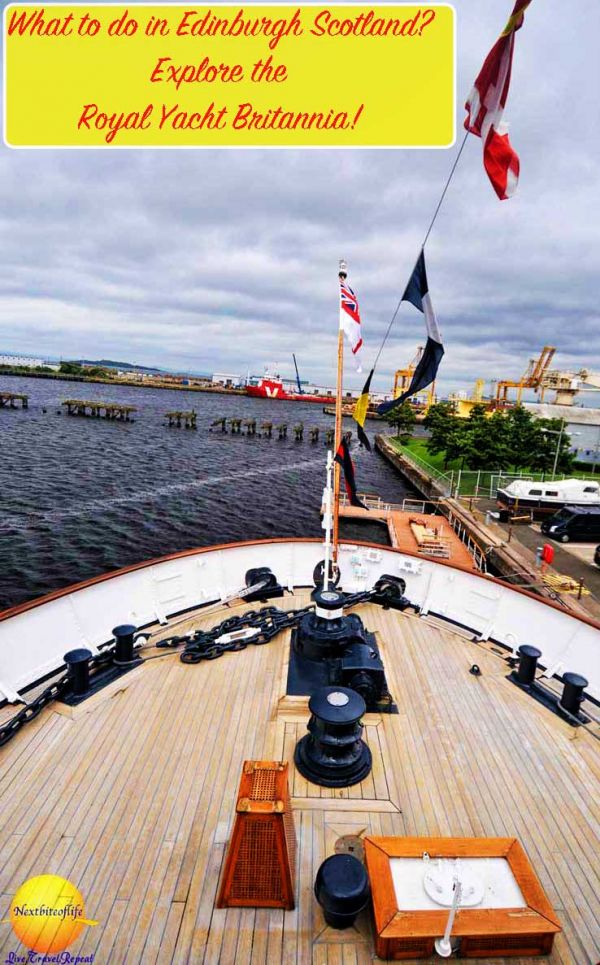 Have you been to Scotland? Did you visit the HMS Britannia? If so, did you enjoy it. If not, would you care to visit for a glimpse into royal life?