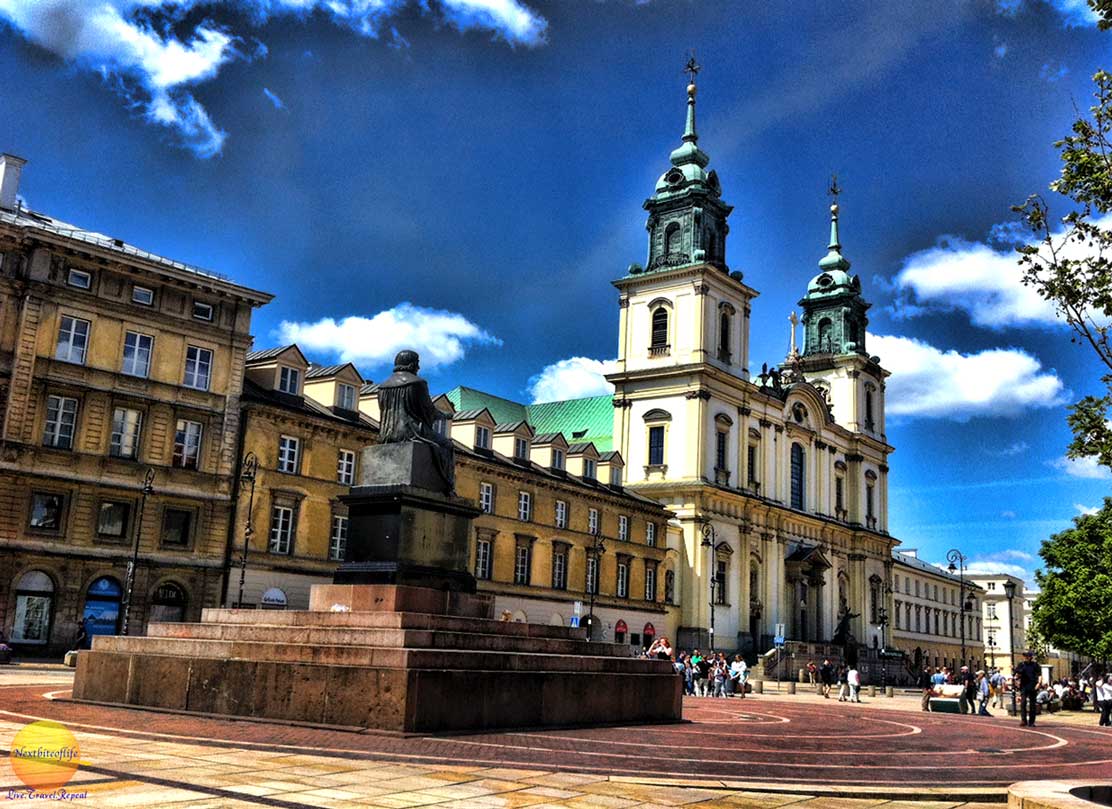 I wasn’t sure of how l would feel about Warsaw to tell the truth. Being that l had really liked, make that loved Krakow made me think Warsaw was going to be more of the same. We had spent the first few days in Krakow and went to Warsaw for the weekend.

The journey from Krakow to Warsaw itself was uneventful. We took a bus for a grand total of $11 per person for the five-hour journey with vistas of rolling fields which was great and a good deal for that price in my book.

Warsaw to me was like the “great pretender”. Let me explain. At first sight, it looks glossy, slick, worldly. On a closer look however, you see the country bumpkin who is just pretending, trying to put on a brave front. Fake it till you make it. The irony is the fact that its trying to emulate its own past glory. It’s easy to see why when you examine the history of the city.

Warsaw became the capital of Poland in 1596 during the reign of  King Sigismund III Vasa  because of its central location between the Commonwealth’s capitals of Krakow and Vilinus. Warsaw was known as the Paris of the East and was considered one of the most beautiful places in the world. The German invasion in 1939 resulted in much the same atrocities perpetrated upon the Jewish population in Krakow as discussed in the Krakow post.

There was a Warsaw ghetto for the Jewish and deportation to concentration camps like Auschwitz and Treblinka. The Warsaw ghetto was the largest in Nazi occupied Europe and housed over 400,000 people in 1.3 square miles. 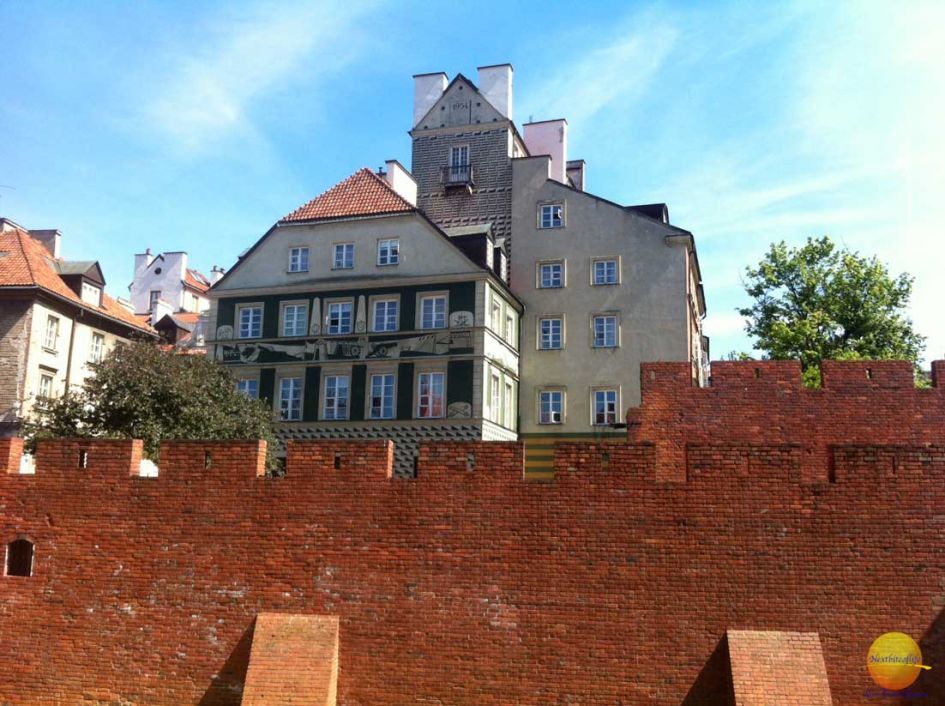 What we hated: The Ugly History:

The Polish resistance, in an effort to liberate Poland from Nazi rule staged an uprising starting on August 1, 1944 as the Soviet army approached the city limits. The Soviet army however, under Stalin’s rule, stopped short of entering and did nothing to stop the uprising being crushed by the Germans despite pleas from Winston Churchill. The end result was destruction of  over 85% of the city.

A large part was systemic levelling of the buildings, block by block by the German troops before fleeing in 1945. Warsaw is referred to as the Phoenix City because it has definitely risen from the ashes. The city has basically been rebuilt to look like it did in the past. It became a UNESCO World Heritage Site in 1980. That is probably one of the reasons l don’t like it. It’s a shiny penny..like Disneyland or Universal Studios back lot with no soul.

Federico loved the new look of the city right away. I tend to like a bit of grit. What we hated about Warsaw was the pain and suffering the people, especially the Jewish people had to endure during the horrific years of the war. Countless lives were lost due to greed and a desire by some to conquer the world and eradicate those they considered inferior. This affects me on a grand level that makes my stomach churn.

What we loved about Warsaw.

Our AirBnB rental was a fantastic find in a great neighborhood and l would definitely recommend it for anyone traveling to Warsaw. At roughly $35 a night, it was a bargain. It was a studio apartment but it had all the comforts of home. Located on the 17th floor, it had spectacular views of the city.

Bonus, the tram stop was less than a couple of minutes walk which was fantastic. I loved that. If you’ve never used AirBnB but want to try, feel free to use our link to get $39 off your first rental (we get some credit too, so it’s a win-win). It was also a nice area with green spaces, groceries and restaurants nearby which made things easy. If you would prefer a hotel, you can use our affiliate link. Find hotels in Warsaw at any price point as it shops across all sites for the best possible prices.

We absolutely loved the food in Warsaw. There is a huge variety of international cuisine. We took every chance to eat Indian food especially, because l love it so much :-). The restaurants were similar to the ones in Krakow as expected. We however found the prices were definitely higher, especially in the touristy areas. In this case, l would advise you to seek out eateries a bit further from the main squares.

As of late, Warsaw is considered one of Eastern and Central Europe’s most liveable city and ranks 32nd as the world’s most liveable places. I think they are capitalizing on this and have high prices to go along with the skyscrapers and newfound hipness. I don’t buy it. It all looks pretty hollow to me. Maybe I’m just digging too deep. Federico didn’t really see it until l pointed it out to him. It’s like they’re trying too hard which puts me off. I also wonder if seeing and liking Krakow first had influenced me.

The Old Town is quite nice and they did a good job of replicating what it must have looked like before.

Best things to see in Warsaw include:

We walked for miles and enjoyed walking around the clean city, checking out the various sites like:

Warsaw Palace of Culture and Science:

Even though it’s not unusual to see his statues all over the world, this is cool because he is actually a native son, one they are obviously very proud of, and they should be. I loved him.

What l hated : The looks bordered on racism

Is there racism in Warsaw?

None that l saw towards others or to me physically. Nobody called me names to my face at least, but l did feel a palpable hostility that made me a bit fearful. I don’t know if it was specifically because l was black in Warsaw or the fact that we were an interracial couple. It might have been a combination of both l suppose.

Perhaps the greatest reason behind my dislike for the city was how uneasy l felt during the weekend there. I never at any time felt unsafe though, just unwelcome. As a black woman who is often the only one in a throng of people pretty much everywhere we travel, I’m used to the stares, both curious and otherwise. It’s often something l don’t think of. In Warsaw however, I felt a different vibe. It wasn’t curiosity except for the little kids. It wasn’t hostility. It was what l would describe as  “cold”. The looks were saying to me “Oh great! Now, you’re here too??”

I only recall two warm, welcoming people. An old woman who obviously owned one of the restaurants we ate at, and a young man who helped us out with directions when we were lost after being rudely dismissed by some other guy. I saw very few black people in Warsaw the whole weekend, 2 other women only. One Uber driver was a black refugee from East Africa and had been in Warsaw for 3 years.

Conversing with the Uber driver during the ride, he said the first year he had been extremely miserable and only the thought of his family kept him going. He had taken intense Polish classes and was now able to communicate which made a big difference in how he is treated. He had been to Krakow and liked it, but he had a good thing going in Warsaw and was going to stick it out.

You know I’m not imagining it when at the train station, Federico blurted out in a loud voice.. “What is wrong with these people? You’d think they’d never seen a black person before!. Now l know what you mean when you say you wouldn’t live in some places! I would have to kill or get killed”. I can only assume the kind of stares they were giving him.

I didn’t let it affect my weekend in any way, but l was glad to get back to Krakow. While a weekend is not nearly enough time to make a decision one way or the other about a place, I don’t have three years like the poor driver, nor do l wish to expand that sort of energy fighting negativity. There are so many other places in the world that welcome me and my color and my money.

Would I visit Warsaw again?

Maybe. If only to see if l had been right in my original assessment. I certainly wouldn’t make it a priority as there are other places like Gdansk and Wroclaw in Poland that l would like to see, not to mention the rest of the world. I can’t think of anything compelling that l missed and life is too short, especially when l’m spending my hard earned money.

Is Warsaw worth visiting?

Not for me! Just to reiterate that this is my personal experience. I’m sure there are other minorities who have been to, and loved Warsaw or have felt about Krakow what l felt about Warsaw. I certainly wouldn’t tell anyone not to visit. I can only tell what l felt like as a traveler there. I also don’t want anyone to feel sorry about my experience. It wasn’t bad, It just wasn’t great, and since l never gloss over everything, I’m sharing.

Now you see why l say this blog is destined to stay small :-), l hate people blowing smoke up my behind and can’t bring myself to do it to others. If Warsaw is in your travel plans, you should definitely go, especially if you’re not a minority. Fact is, for me, even if l had gotten a warm reception from the people, I still wouldn’t have liked the city much for because l really do feel it is the great pretender. 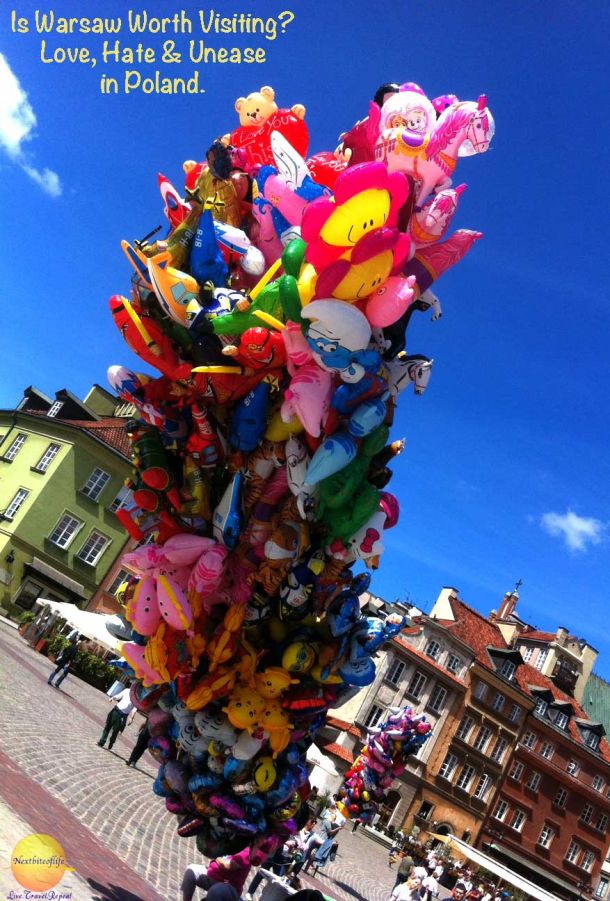 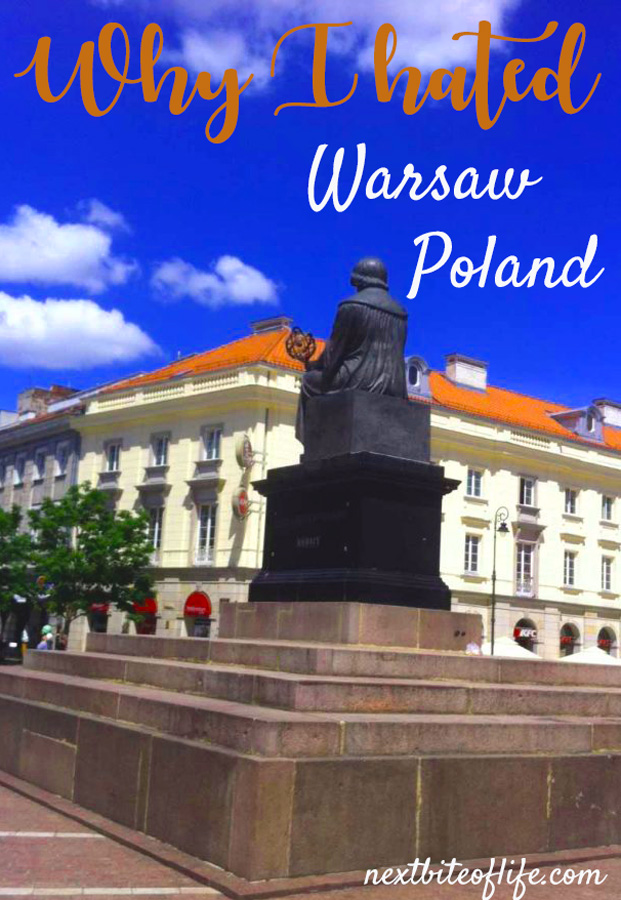 Have you visited Warsaw or other parts of Poland before? If yes, how was your experience? If not, does it sound like a place you would like to visit? Are you curious as to how they made the new look old, or at least older?

Powered by GetYourGuide. Become a partner.

53 thoughts on “Love, Hate And Severe Unease In Warsaw Poland”