Peles Castle Is One Of The Finest In Romania 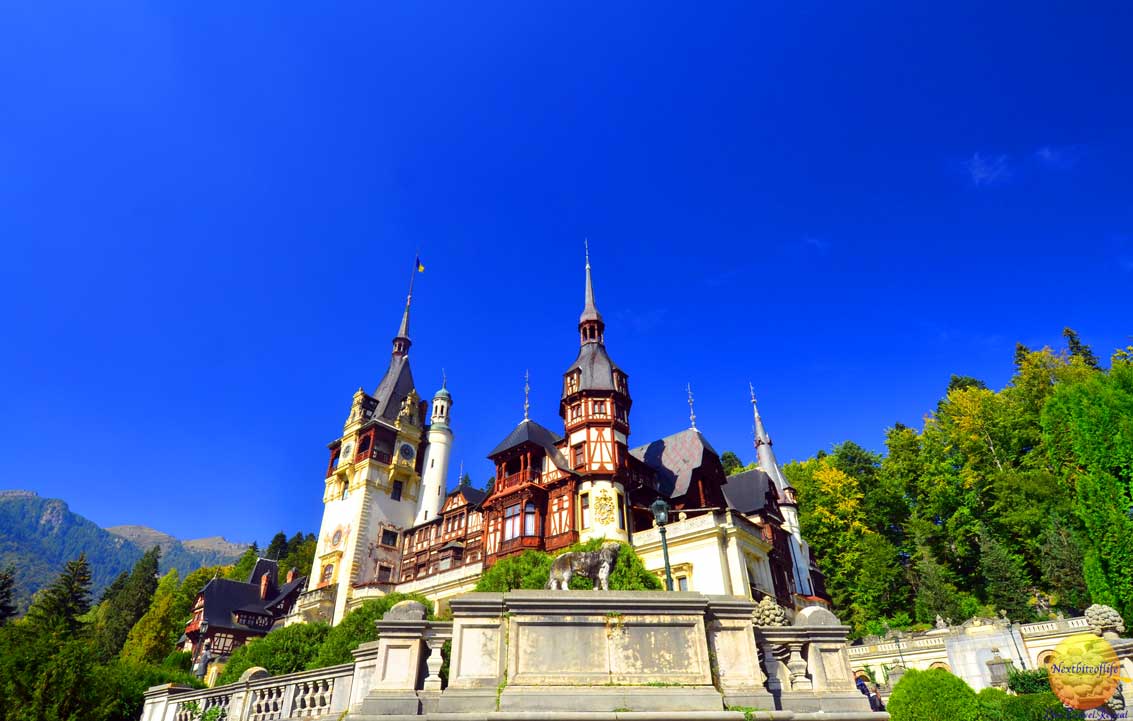 Peles Castle is considered the most beautiful castle in Romania. After having visited, we totally agree that it definitely a must see in Romania. It’s stunning and a visit to Peles castle makes for one of the best day trips from Bucharest.

We were torn between visiting Peles Castle and Bran Castle (Dracula) because we only had time for one. Ultimately Peles Castle won out due to the impressive royal history and feedback from past visitors. If you’re in Romania, I think l can say without a doubt that your choice should be a Peles Castle tour as well. 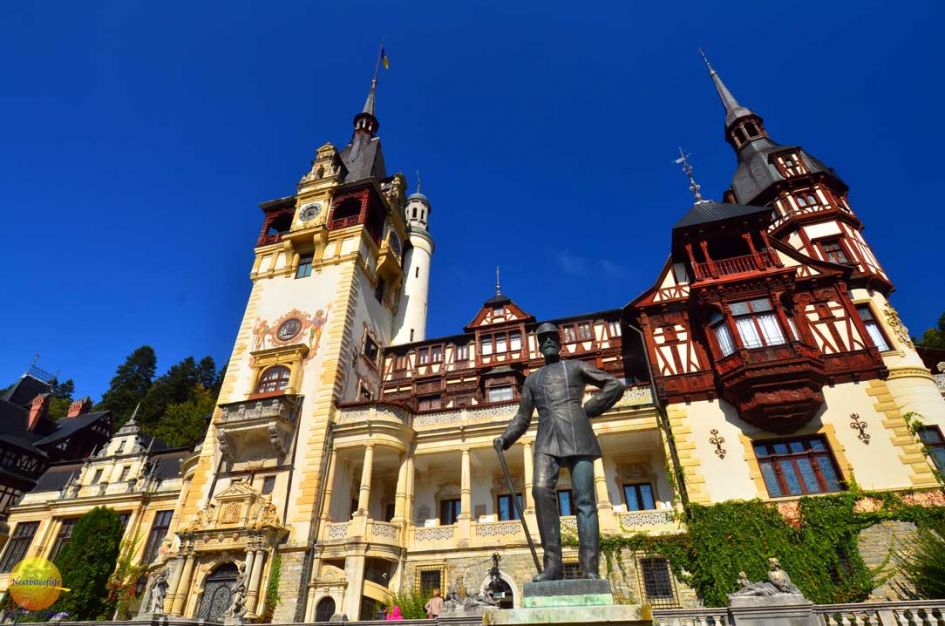 King Carol I surveying all that is his!

Where is Peles Castle located?

Peles Castle is located in the town of Sinaia, in the Carpathian mountains of Romania. Just 77 miles from Bucharest and 30 miles from Brasov, it makes for an excellent day trip from Bucharest or Brasov (where we spent the remainder of our holiday). We chose to go by train to Peles from Bucharest though, but there are also cheaper buses that will get you there.

The cost for the train from Bucharest to Sinaia station was roughly €8 and took about 90 minutes. Well worth it as the ride is comfortable. We literally had to run to catch the train as we had Uber problems. Calin was already waiting for us inside the Bucharest Nord station with the tickets. We made it with seconds to spare. I can laugh now, but it was a bit hairy at the time. The train journey was wonderful and you get the most awesome views of the mountains with the lush greenery. Getting from Bucharest to Peles Castle was a breeze compared to getting to the Bucharest station itself! 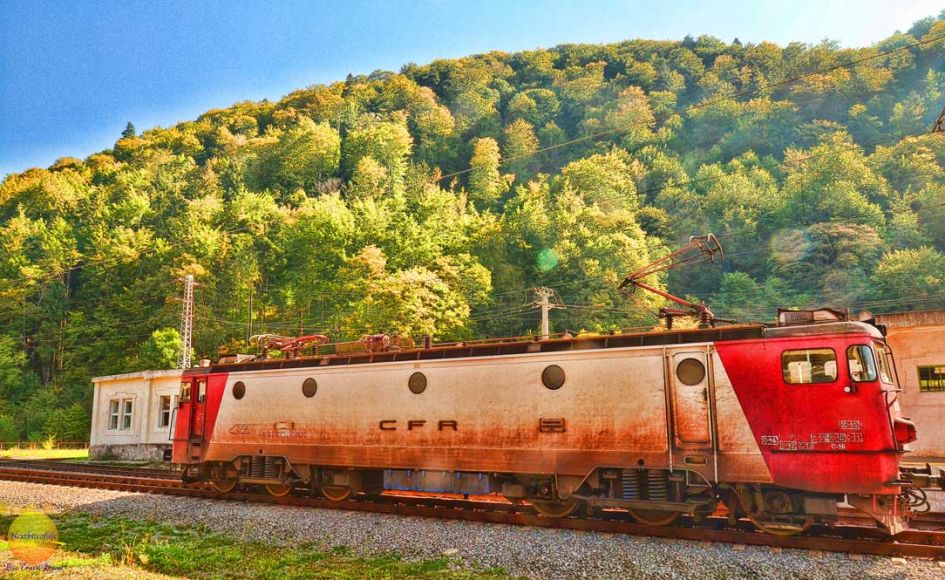 Once at the Sinaia station, take a minute to check out the station itself. It’s not very big by any means, but has a royal history. Originally built in 1913, it was for the exclusive use of the Royal Family and the guests of Peles Castle. A Prime Minister was assassinated on the station platform by the Iron Guard (Far Right nuts). President Gerald Ford and then Romanian President Nicolae Ceausescu were there in 1975. I found the interior very beautiful.

You can of course choose to do a guided tour if you don’t feel savvy enough to purchase the train ticket on your own. If you do, make sure you have enough juice on your phone for translation. We might have considered it had we not been with a Romanian local :-) .

How to get to Peles Castle from Sinaia train station:

We found the best option to be by cab. It was less than $6 for the ride. You can walk if you want, but it is an uphill journey, and l would not recommend it :-). Peles Castle being Romania’s most popular tourist attraction, you can imagine that it was a bit crowded. The good news is that there are tours conducted in different languages, so tourists can go enjoy the gardens while waiting for their tour to start. 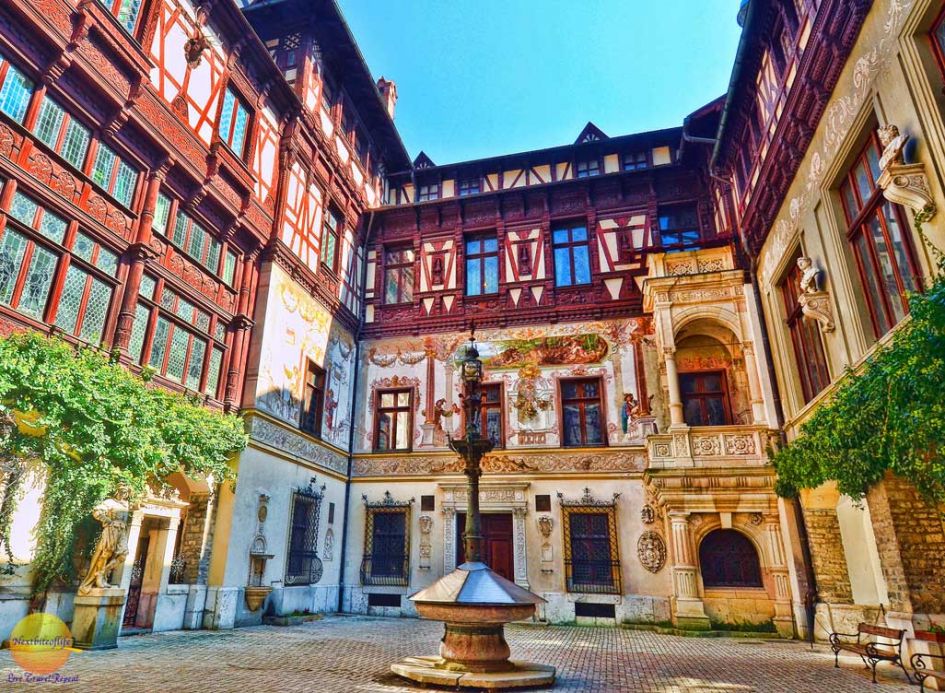 Peles Palace courtyard. Is this not impressive ? It’s absolutely gorgeous. 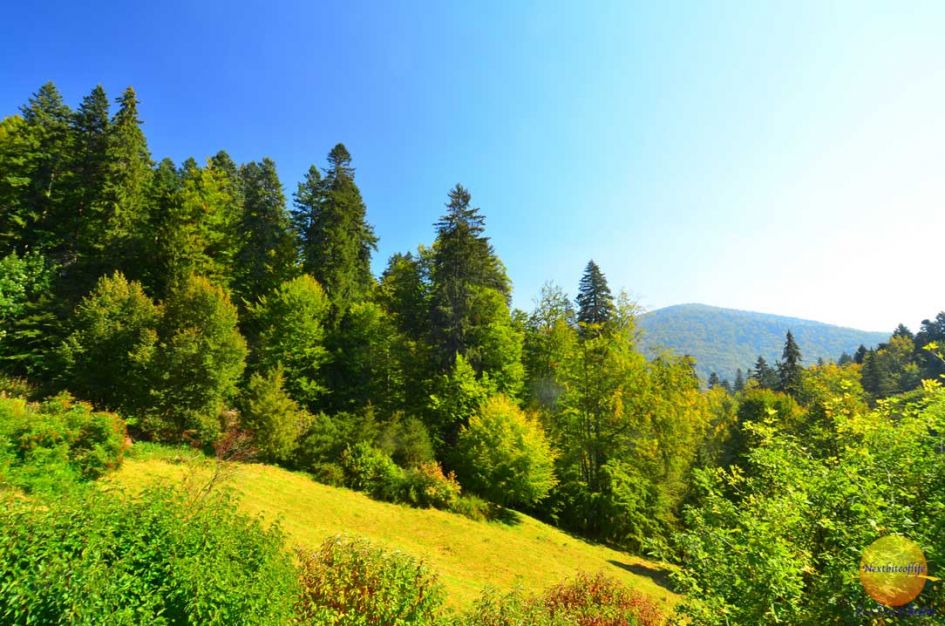 We took the full tour of Peles Castle which lasted 75 minutes. This tour included the upper floor of the castle. The other main tour was 45 minutes long, after which the people were told to leave and we continued on. Here are the key points from the English tour that we took:

Peles Castle Interior: (some of my favorite spaces in the castle) 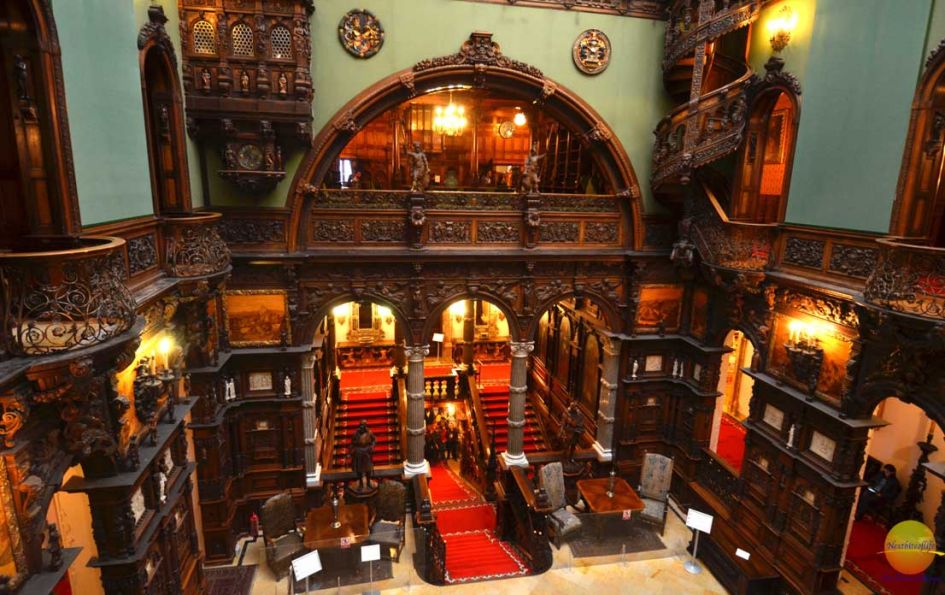 One of the best views inside Peles Palace from the top to the grand hall of Peles. Love the curved stairwell that leads nowhere. 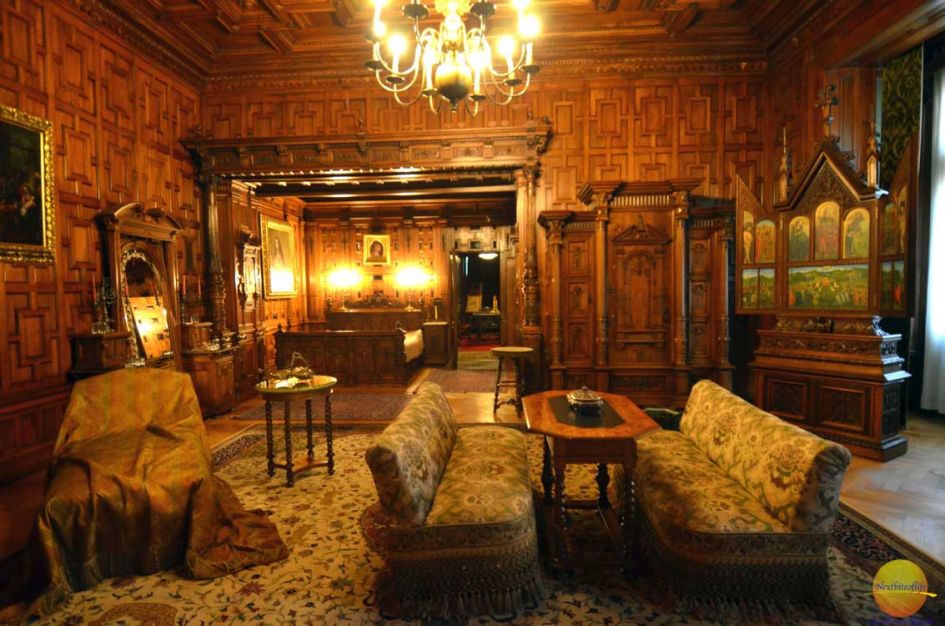 The rooms were humongous. I think she said this was for the Queen where she wrote novels under a pen name. I’m guessing that bed is queen size :-) 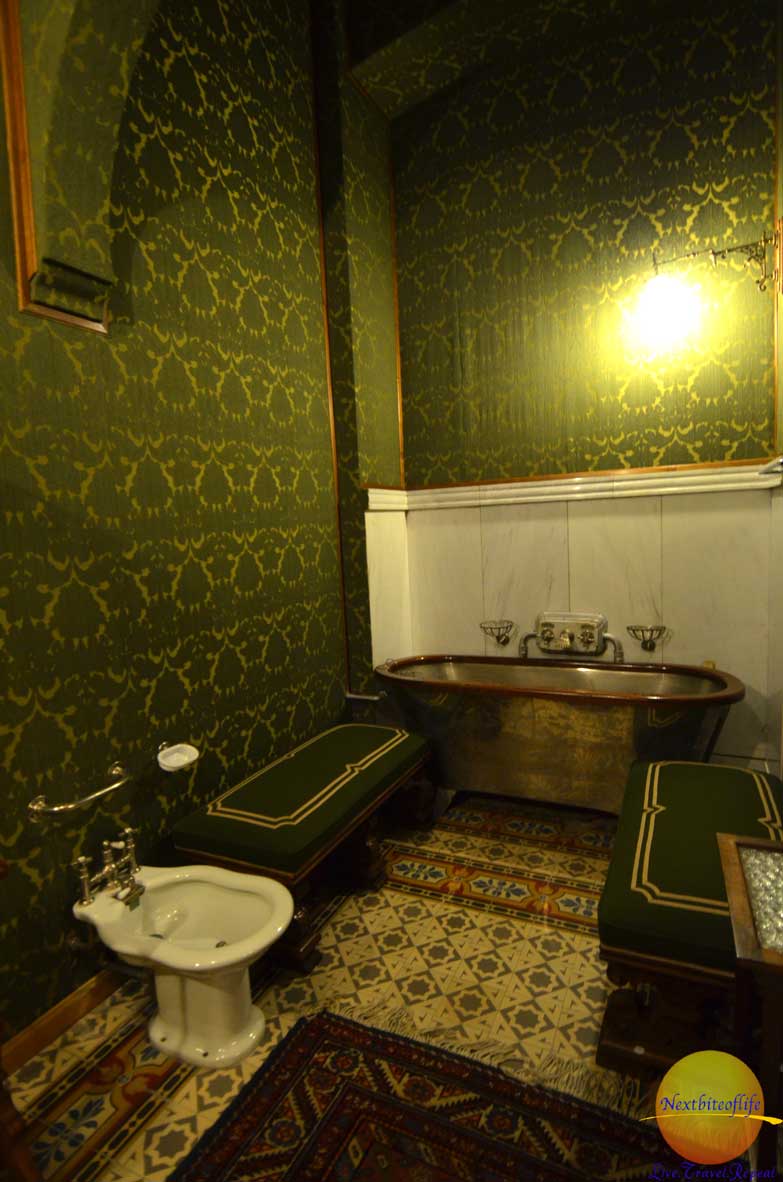 Pretty modest bathrooms considering how luxurious the rest of the palace seems to be.. 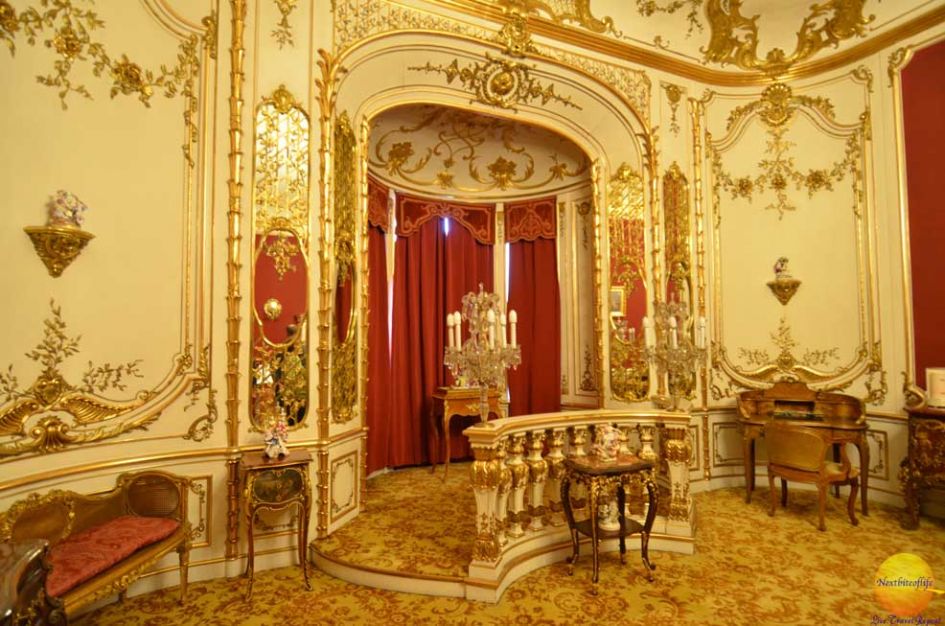 It’s not easy to make gold tasteful, but they managed to do it. 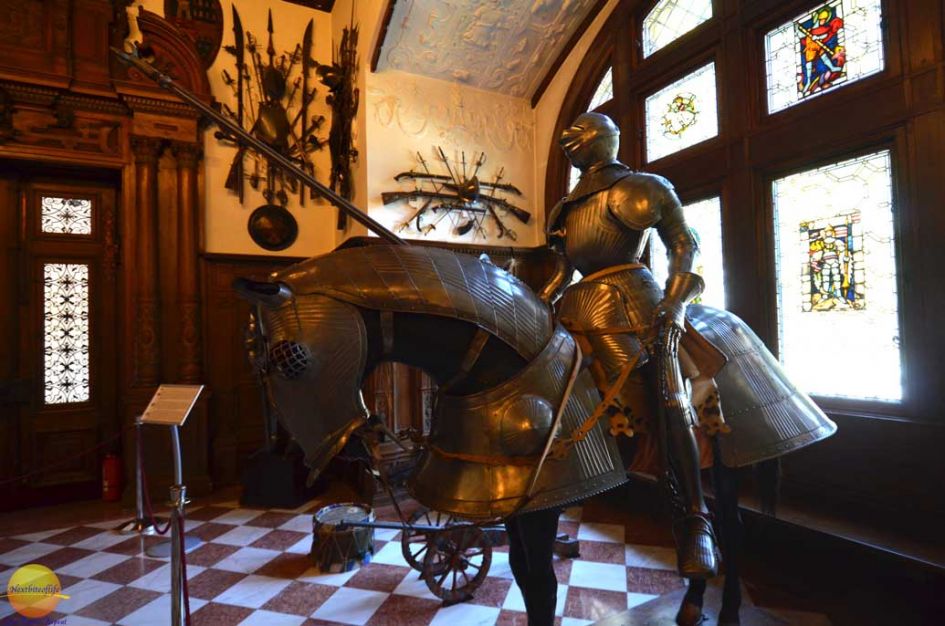 Inside Peles Castle:: Knight in shining armour in Peles Castle Weapons room. They had all kinds of killing equipment and the most beautiful stain glass windows. 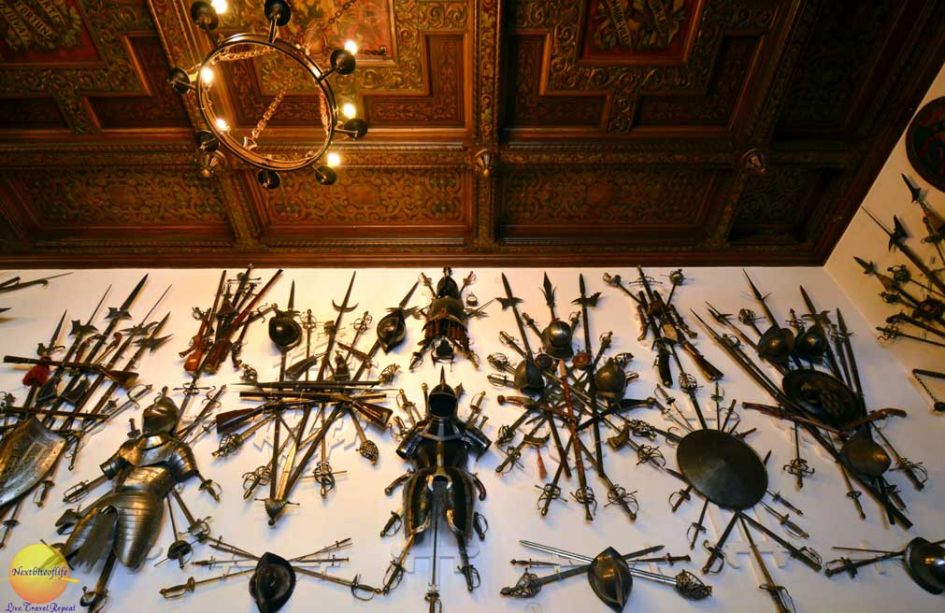 I’m not going to lie. It was one of my most favorite rooms in the palace. 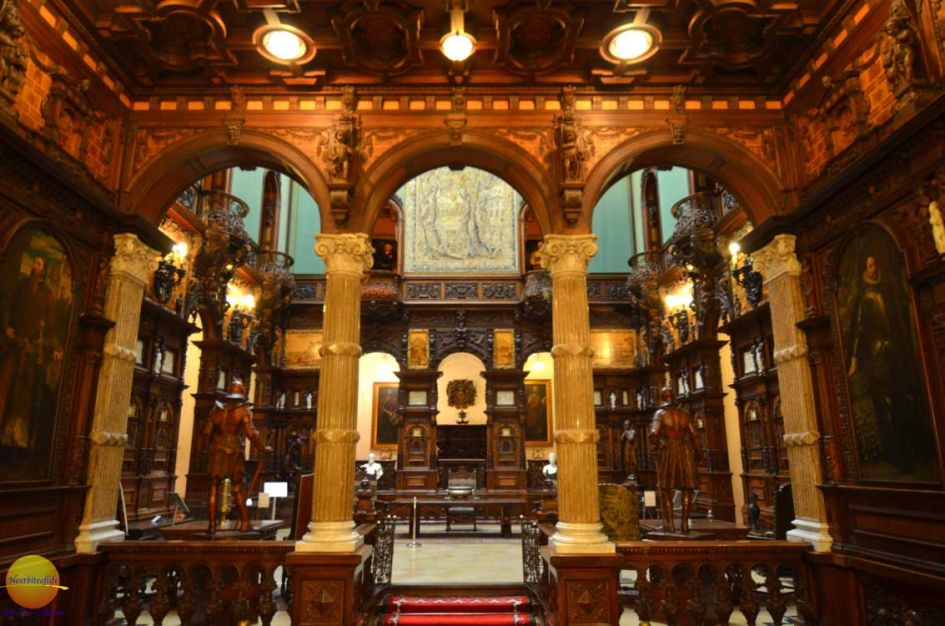 Looking into the Grand Room from the Grand Hallway.

Is Peles Castle worth visiting?

Absofreakinglutely! It is a picturesque place. Like a fairy tale castle. It was worth it just to see the Peles Castle interior. I loved checking out the rooms and there was one spiral staircase that led to nowhere that was just breathtaking. My only regret was that you weren’t really allowed to linger much as there was invariably another group behind you.

Peles Castle is one of the finest examples of the Romanian castles. I can’t imagine Bran Castle being better than this. Yeah! make a visit to Peles Castle part of your Romanian experience. I am always intrigued by how royalty lives. It’s good to be the king.  I half expected it to be garish, which is how l will forever describe Versailles Palace and a few other palaces l have visited :-). Instead, I found Peles Castle to be tastefully decorated, with warm wood tones (more mahogany than oak) and very elegant. 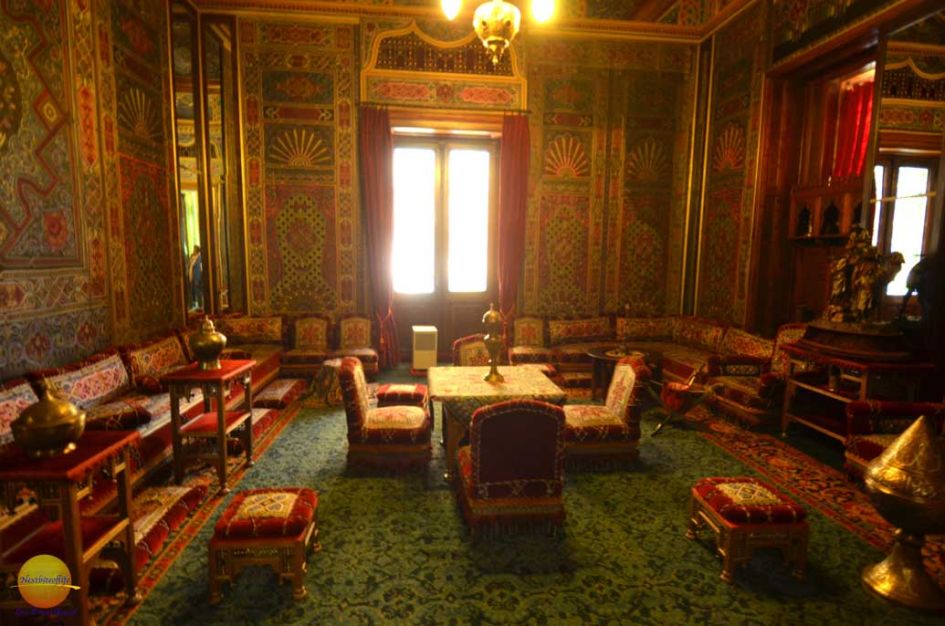 If l remember right, this was part the Arabic Room where the men could smoke their pipes. The other half of this huge space had gorgeous vases. 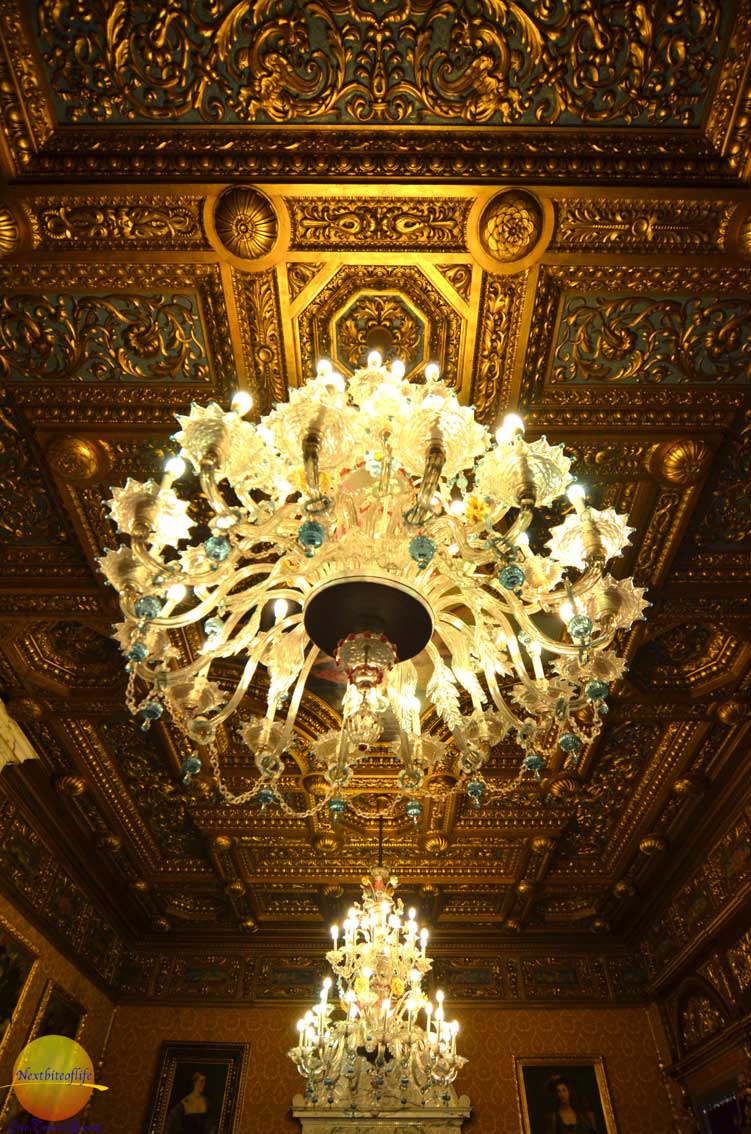 Check out these chandelier details

**Note** If you want to take pictures of Peles Castle interior, you need to pay an extra 30 Lei. This includes cell phone pictures, but l did see a lot of people hanging back and taking pictures :-) .

There is also an additional charge to see the lesser of the two, the Pelesor Castle, which l thought was overkill and not worth it. There was no way it could match the splendor that was within Peles Castle. We didn’t even bother asking how much it would be and chose to head back to Bucharest. 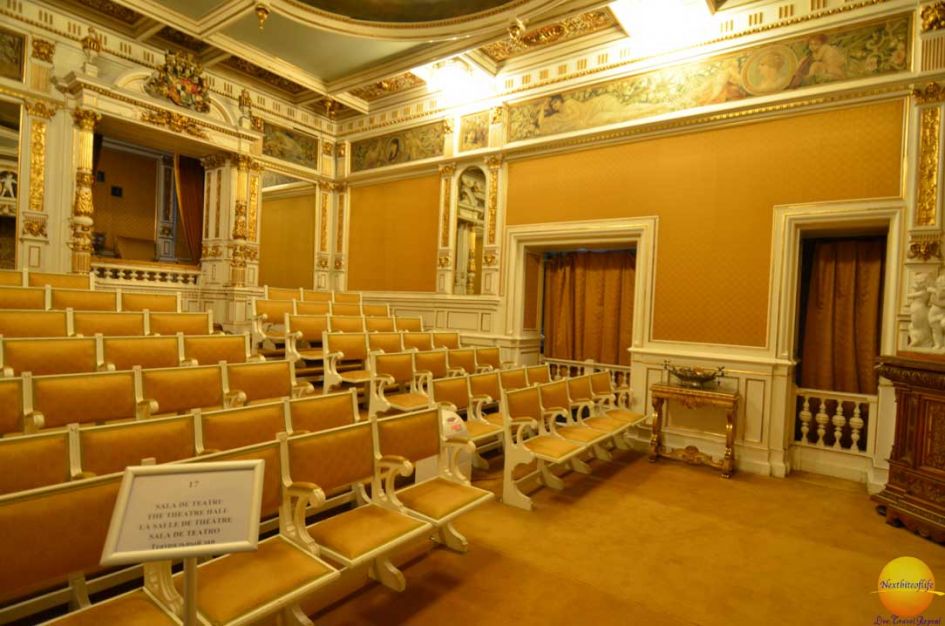 The theater hall – how nice it must have been watching a play. 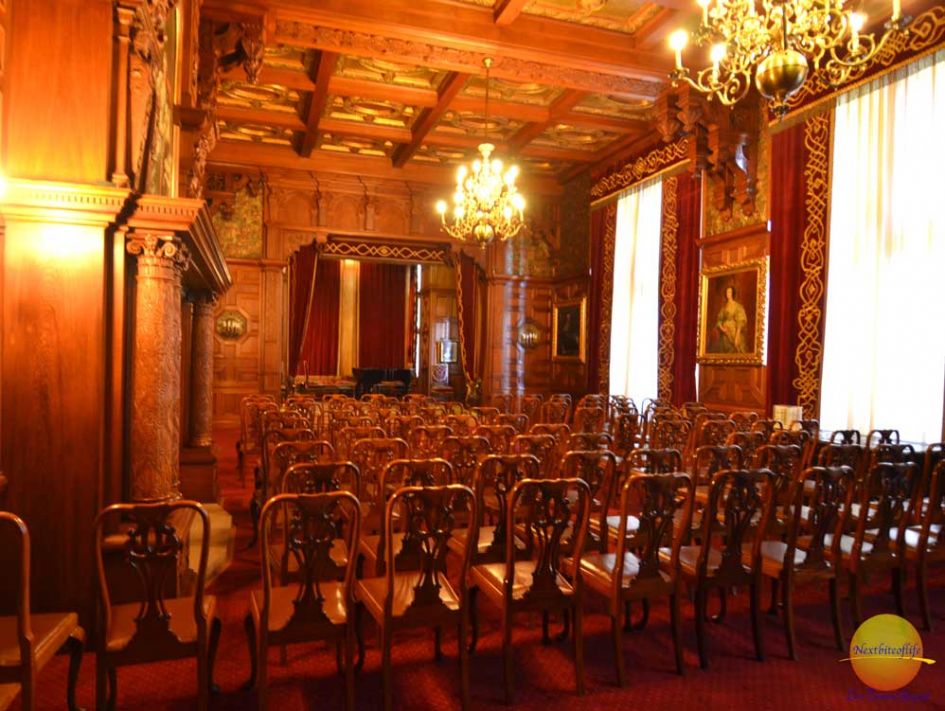 Or imagine being one of the lucky few to be invited for a concert here. 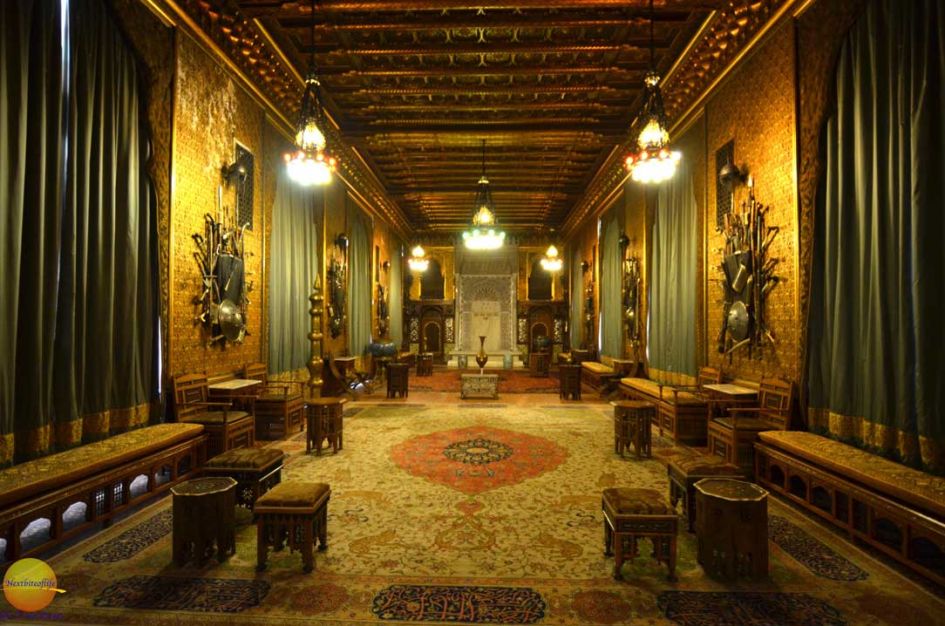 This place is insane! Choose Peles to visit if you must choose between the Romania castles :-) 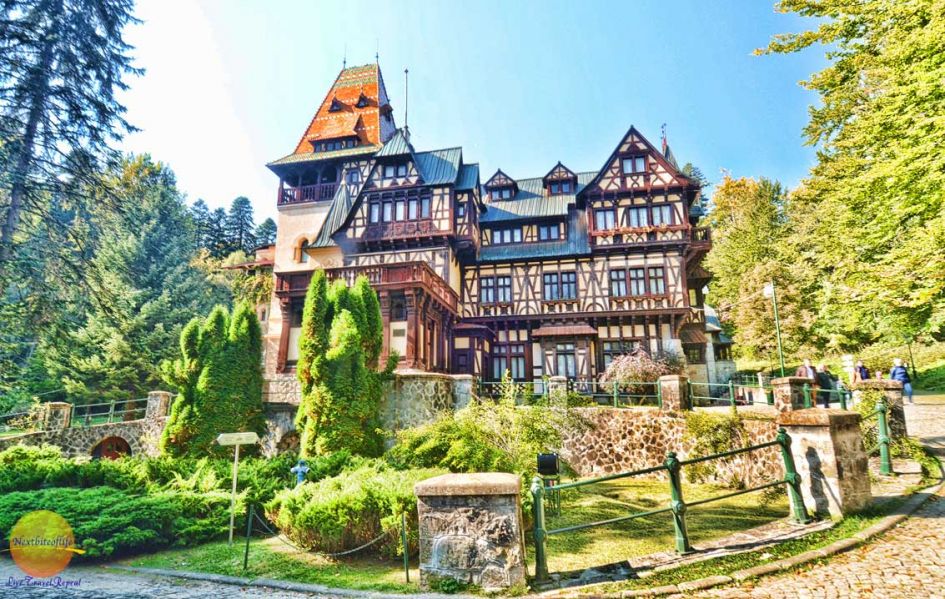 Exterior of Pelesor Castle which we skipped. 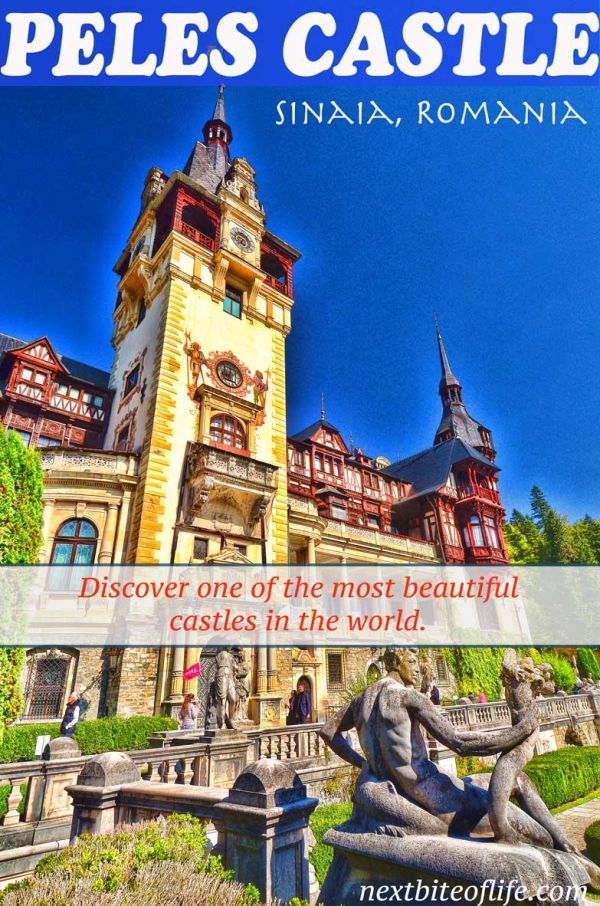 Have you been to Romania? If yes, did you make it to Peles Castle and agree that it’s one of Romania’s finest castles? If not, is Romania on your travel radar? (It should be)