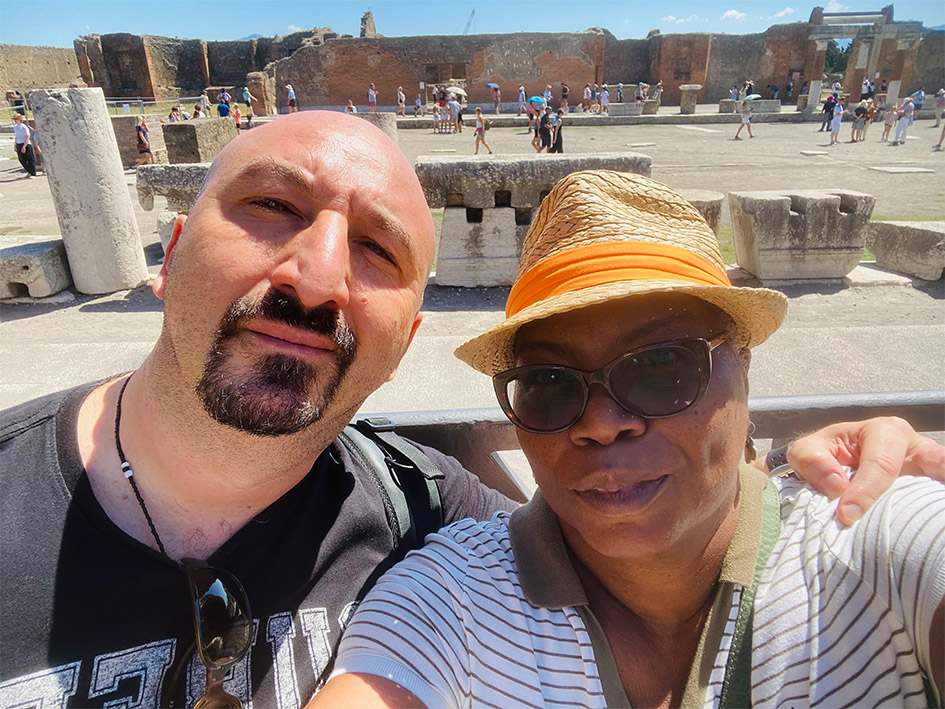 How we spent the summer – this past summer was incredibly both short and long! It’s been a long time since l had an update on life in general. I really don’t know where the time has gone, to be honest.

How we spent the summer – A life update (mostly me 🙂 )

Looking at all the weather problems that are currently occurring, thanks to doozies such as Hurricane Ian and its destructive path. I keep looking at the ravages on television and it’s mindblowing.

It has been giving me flashbacks of Hurricane Ike when we lived in Houston and my heart goes out to all the people affected by that, and other natural disasters around the world, not to mention the war that’s shaping up to be a long drawn-out one.

It makes me realize just how lucky we are that our problems are so insignificant and that we are indeed blessed, something l sometimes take for granted… sometimes.

I thought l would recap our summer since l haven’t had time to write a full-on blog post about our travels in Italy almost two months ago. I promise they are coming.

I did write about our visit to London in June whilst the Queen’s Jubilee was going on. I realize now how fortunate we were to witness such a historic moment since the Queen died just recently. I had joked about waiting till the next one.

We spent most of July in Italy, visiting Rome, Pizzo, and finally Naples. Pizzo and Naples were new for me and l really loved both places for different reasons. Pizzo was quiet and relaxing, consisting mostly of eating and going to the beach.

Naples on the other hand was chaotic and just as insane as everyone had told me it would be. We spent a lot of time having pizza in different pizzerias, sightseeing, and generally chatting up to locals (Fede was on a mission to find the best burrata or something) and of course, most of the waiters loved chatting.

Naples was a place l really loved. I am sorry it took me this long to visit, but for sure, l will visit again soon. Fede had always told me it wasn’t safe (and yeah…the last time he visited was over 30 years ago, so things have changed since then, thank goodness).

Anyone still sitting on the fence, schedule your visit. You will not be disappointed. The food, and the people, even with their Maradona obsession, are awesome. We only got to visit Pompeii which was awesome. We will save Herculaneum for another visit. For sure, there will be one.

So what have l been up to this summer?

My Spanish classes ended at the end of June, and l continued studying on my own on YouTube and with a Colombian woman, l had met on the street who wanted to learn English. My confidence level has really shot up.

You may or may not recall that l have been taking online drawing classes, with an eye on children’s illustration. This was quite the challenge. I couldn’t draw two sticks together to save my life. Now, I can draw three sticks!!! 🙂

I did persevere though, and l improved very much if l may say so myself. I accomplished something l have dreamt of, writing and illustrating a children’s book for a very long time. The book was released about two weeks ago.

I am also the worst person at promoting myself, and this time has been no different. I choose to write under a pen name, I’m not entirely sure why, as l am proud of what l have done. I write for my numerous nieces and nephews and love their honest reviews. Fede’s dad always quoted this Roman saying which translates to “a head that doesn’t speak is a pumpkin”, so l am doing just that.

Anywhoo… here is my latest book that is on sale on Amazon. I had a lot of fun drawing and writing the rhymes. I would love any support you can give me, either by purchasing it as a gift, a Christmas stocking stuffer, etc…etc. If you have Kindle Unlimited, you can read it for free.

I would definitely appreciate any and all reviews. My plan is to write more. This leads me to the other thing I’ve done this summer, set up an online shop that started solely for the books but has now evolved to include selling other things that interest me, such as planners and travel itineraries, and yep! mugs and tees.

We spent the month of August here in Valencia, and boy was it hot! A record-breaking summer. The last time it had been this hot in Valencia was 1938. The humidity was stifling. Most of the month was spent indoors during the day, but even the nights didn’t offer that much relief.

We left Seville to get away from that l found myself saying often. It’s going to be interesting going forward, I hope it’s not a sign of things to come. Weatherwise, it was definitely a cruel summer.

In addition to my online classes, I also had my foodie and lunch group events that kept me busy. Lastly, I have been studying to take the theory exam in order to get my driver’s license in Spain. It has not been easy l tell you! I will write a bit more about that in the future. If l pass that is.

As far as future travel plans? None for now. Prices are creeping up as far as fares, even for low-cost carriers, so l think more Spain travel. We had friends who went to Amsterdam recently, and the airport is still a mess. I am not in the right frame of mind for all that nonsense.

Spanish classes have also started up again. l put my name in for the lottery and got selected. Since it’s a conversation class, it doesn’t matter that it’s the same thing as l figure it would be different people, and it is. There are two of us from last year with the other nine people new. I wonder how many will be left by the end of June :-).

In the meantime, we watch the market rock and roll as we settle into the recession. The dollar being strong against the euro and even the pound is music to my ears and l wonder how long it will last. Until then, we are taking advantage of it.

So this is how we spent the summer. It’s been an uneventful one for the most part, and l am very glad about that.

How was your summer?

10 thoughts on “How We spent The Summer – Good Life Update”