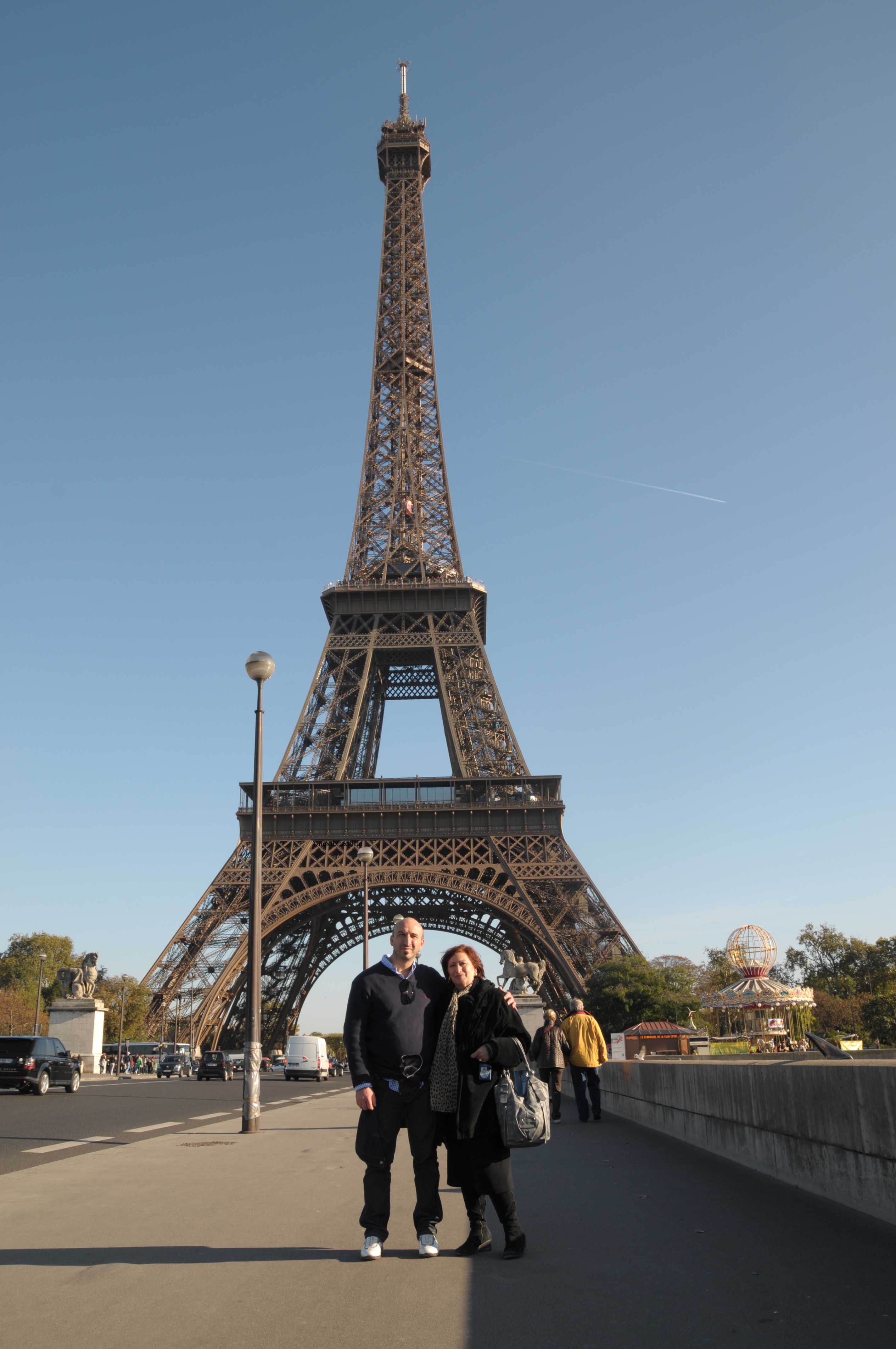 Paris, I love you! A few months ago, we were in London and decided on a spur of the moment excursion. We decided on a trip to Paris vis Eurostar. We took the Eurostar train for the little over two hour journey. We arrived at Gare du Nord station in Paris about 10am, which was perfect.

Paris In A Day:

We spent several hours roaming around Paris via the metro and we got to see Paris in a day. It was a lot of fun revisiting places and she loved it, as it was her first time. Here are some places we saw our very full day in Paris, places that should be included in your Paris itinerary for a day if that’s all the time you have.

See Paris in a day from London: (Best Things to See in Paris)

The best way to see Paris without a tour is by doing a lot of walking or using the metro. The metro is easy to use. A single ticket on the metro costs €1.90 and is good for two hours once validated. You might prefer to get a day pass so that you have unlimited travel for the day. The cost of a day pass in zones 1-3 (Paris Center) is €12.30.

Get your pass at Gare du Nord metro upon arrival on the Eurostar, and make sure to pick up a tourist map showing you the popular sights. This makes it easier to plan your day and choose what places you want to concentrate on since you have just a day in Paris.

Our one day Paris must see:

Located between the Louvre and the Place de la Concorde. A public garden that was created by Catherine de Medici. Built as an Italian Renaissance garden, it features fountains, labyrinth and even a grotto. There are some of the most amazing statues as well including some by Rodin, a few risque ones too. It’s a wonderful place to get a glimpse of Parisian life and to have a picnic. Definitely one of the places to visit in Paris in one day. It’s so pretty.

Founded in 1669 by Louis XIV. Roughly 370 performances a year with quite a high percentage of the attendees being foreign visitors, it is quite a draw and just gorgeous. Degas has quite a few paintings depicting dancers at this very famous opera house.

The world’s largest and definitely the most famous museum. It is also in the 1st Arrondissement. The Louvre is the third most visited museum in the world, getting over 7 million per year. It’s not unusual to have lines with over four hour waits.

I suggest booking in advance or going with a tour to skip the lines. It was definitely not on our agenda to see the interior. Did you know it was originally built as a fortress? Since we only had one day in Paris, we couldn’t have toured the Louvre. You would need a whole day for that by itself. Take your photos and move on.

There was a big fire on April 15, 2019 which destroyed the roof of the Notre Dame Cathedral. Access to Ile de la Cite where it is situated is now closed. It is estimated that the building will be closed for five to six years

The medieval cathedral in the 4th Arrondissement. One of the first buildings in the world to use the flying buttress. The gargoyles are stupendous. I always think of “the bells! the bells!!” from the old movies with Quasimodo. Worth peeking inside. Since this is a small one day in Paris guide and you don’t have a lot of time, you might just take pictures and move on.

The French baguette is a must on any visit to Paris. Make sure to stop at any bakery of which there are lots and pick up a baguette or two. Find yourself a nice piece of grass, have a picnic and people watch, assuming you can resist eating it once you have it in your hands.

No day trip to Paris would be complete without a visit to this incredibly humongous and world famous store. It literally means “big store” and you can find everything your heart desires, from clothing to accessories. You get awesome views of the city from the top so make sure to stop for some refreshment at the tea room. Look up at one of the most and amazing domed ceilings ever. It reminds me of the Vittorio mall in Milan.

I don’t think there’s anything new l could tell you about this most famous icon of Paris. We did not climb it as the line was too long. It is about 80 stories tall, the tallest in Paris and was designed by Gustave Eiffel. There are three levels for visitors, with restaurants on two of them. Despite our many visits to Paris, we have yet to go up. I hate lines and you can get views of Paris from surrounding places. Consider a Big Bus experience if you prefer a more hands off experience.

One place that l wish we had visited was Sacre Couer Basilica because l know she would have enjoyed seeing it. With such limited time though, it just wasn’t feasible. Make sure and check when the last train leaves from Paris to London so you have plenty of time, otherwise you might end up with two days in Paris! :-).

It is possible to squeeze an hour Seine River and Eiffel Tower cruise into your day in Paris if you plan things right. Get your tickets here now.

If you prefer a Paris day tour, we highly recommend using get your guide, a company we have used personally on our travels (in places like Portugal and Poland) and can recommend without reserve. Buy your Paris tour tickets here. The best part is that you can hop on right at Gare du Nord stop. It doesn’t get any easier than that.

Paris scams to watch out for:

Paris, being one of the most popular tourist destinations in the world has a lot of scam artists, so it is very important that you keep your wits about you. Most likely you will run into one of the more popular scams.

BUY YOURS ON AMAZON

For men and women, a money belt is always good.

We caught the last train back to London later that evening. Luckily, we had thought ahead, and asked the same mini cab driver who dropped us off to pick us up. He was more than happy to as his shift was already over, and it was just extra money for him. This London to Paris day trip was a great introduction to Paris for her, and hopefully sometime soon, we can go back for a longer visit. Our day in Paris was absolutely spectacular. Sometimes, getting little bites of a city rejuvenates you. It wet my MIL’s appetite for more travel. 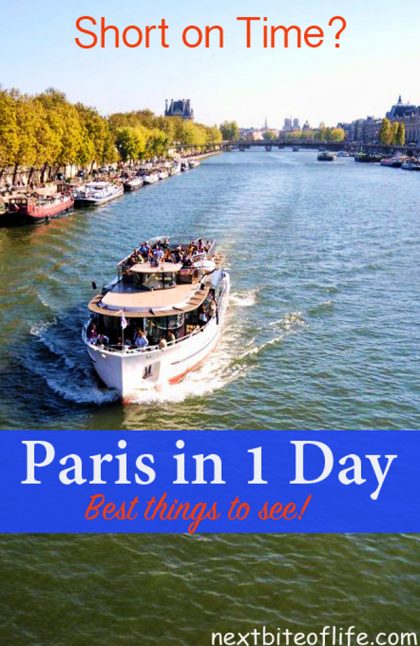 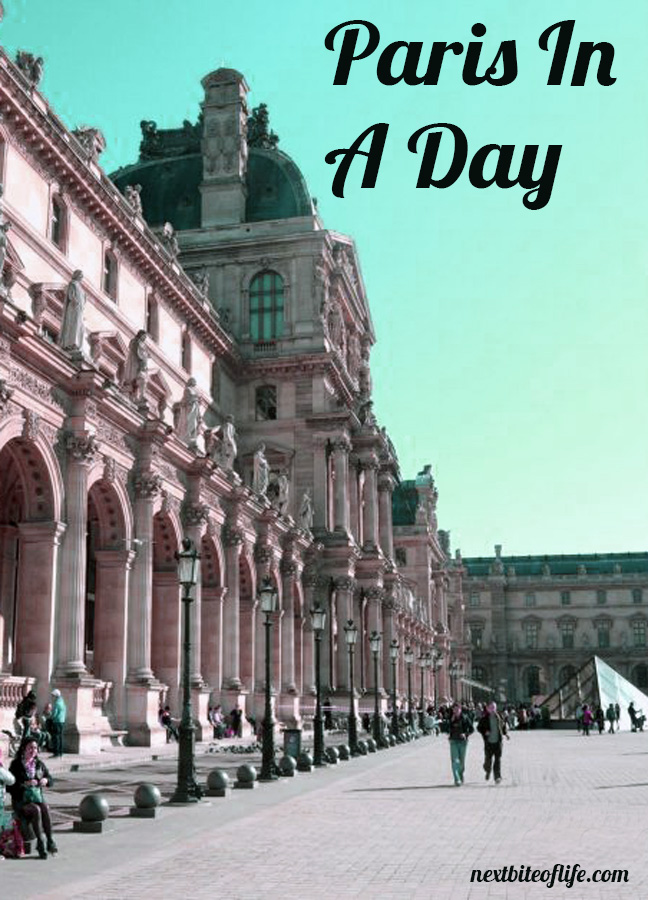 Have you visited Paris before? Was it a day trip like ours? Any suggestions on what else to do on a “Paris in a day” visit?

10 thoughts on “Paris In A Day Via The Eurostar From London!”