Milan In A Day – See The Best 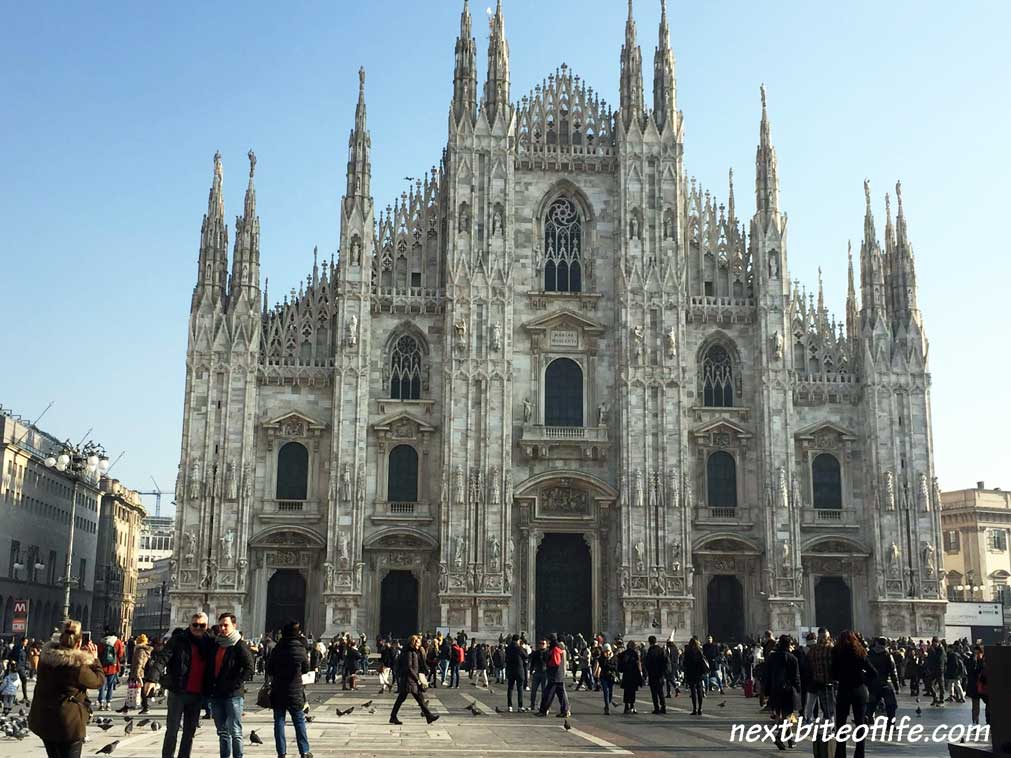 Milan in a day plan: Our recent trip back to Italy had us visiting three different cities on the go-round. Our first stop was Rome to spend some quality time with family. We moved on to Verona from there to hang out with friends. Our last stop was the to me city of Milan where we spent a day before continuing on to Egypt.

We actually spent a further two days in Milan on our way back to Valencia from Egypt. I know this makes a total of three days spent in the city. So the question is “why a day in Milan and not three days in Milan guide?”. Read on for my answer. 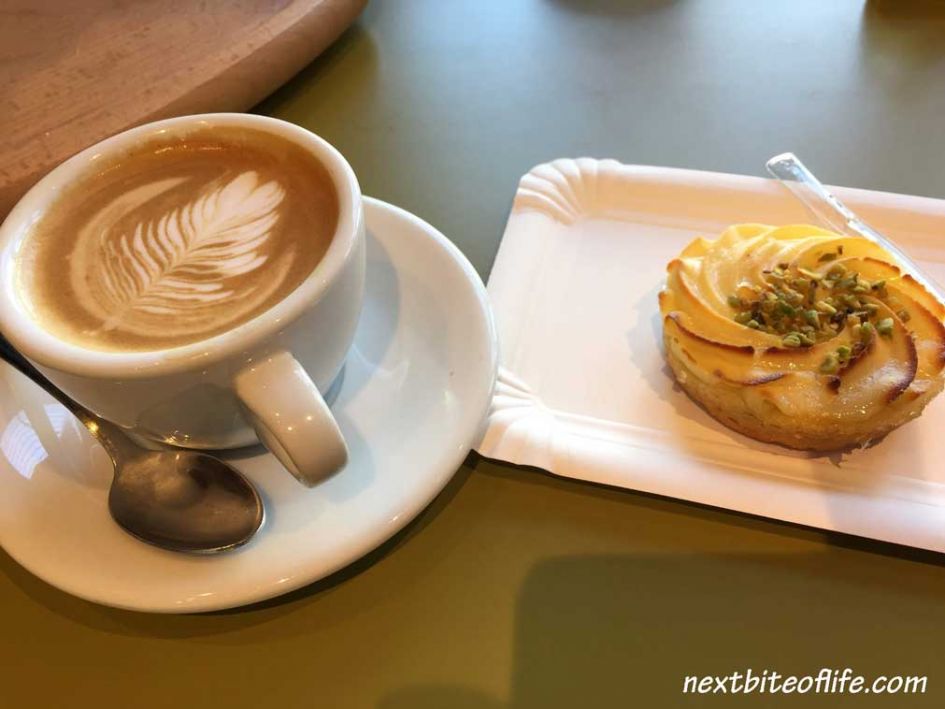 As you wander around Milan, don’t forget to stop at any of the numerous coffee shops and have coffee and dessert.

One Day Guide To The Best of Milan:

Milan is one of the most visited cities in Italy. Over eight million tourists visit on a yearly basis. It’s interesting to me that over half of these tourists are Italians according to Milan tourism office. We took the train from Verona to Milan, and the journey time was just an hour. Our tickets were purchased with my increasingly useful Loco2 app. It’s so easy to find trains schedules, pick the cheaper fares, pay and download the tickets without worrying about language problems. The price was €22.30 for both of us ($25).

My first impression of Milan? Nice city, but it looks really industrial to me. This is what l picture mining towns in America looking like. “Flashdance” , the movie kept popping into my head to be honest as we approached the city. I was not a huge fan of its vibe. You can tell it’s an obviously “rich” city once you are at the core of Milan (the center), there looks nice. It is after all the center of the fashion industry in Italy and a lot of the big names have a presence here, very much a business hub.

Compared to the beauty of Rome, Florence and Verona for instance, it left me wanting more. It was not “romantic” in the least, not by a long shot, so l was a bit disappointed. Nonetheless, I think it makes for a nice day trip. Here are some of the best things to do in Milan in a day. We stayed at the Cardano hotel close to the airport and took the bus in for the day on a daily basis. The hotel was quite cute, super clean and shaped like a football stadium. Both times, our flights departed very early and it was more convenient to have the airport close by.

Things to do in Milan in a day:

An abbreviated version of what to do in Milan since it is a gigantic city and impossible to do it all in one day. You can however enjoy the highlights here and it will give you an overview of the city. Here are places that we feel should be included on your Milan one day itinerary. You won’t be disappointed. 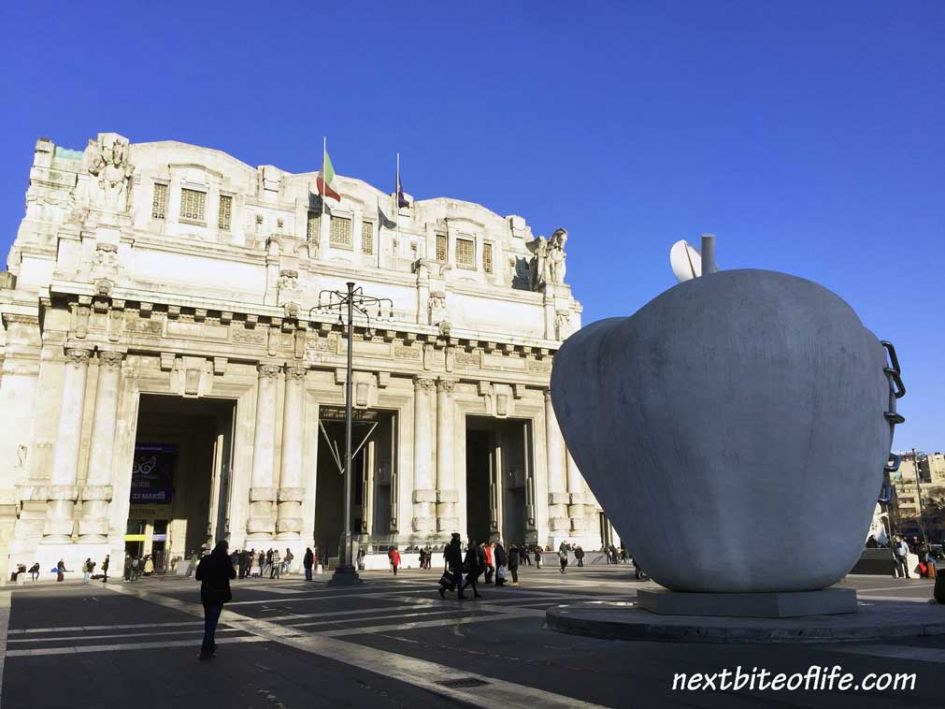 Milano Centrale station is the largest train station in Europe, and a beautiful one at that. Opened in 1931, I consider it a Milan attraction on its own. Mussolini’s desire to show off the power of the fascist regime led to additions of steel canopies to a languishing design that started in 1906. So many architecural styles blend harmoniously. Art Nouveau, Gothic, you name it, and it’s there. There are 24 platforms that ferries over 330,000 per person on a daily basis! Milan Central Station is a nice place to wander around, people watch, eat and shop. You can find the train schedules here.

One day in Milan: must include Via Montenapoleone: 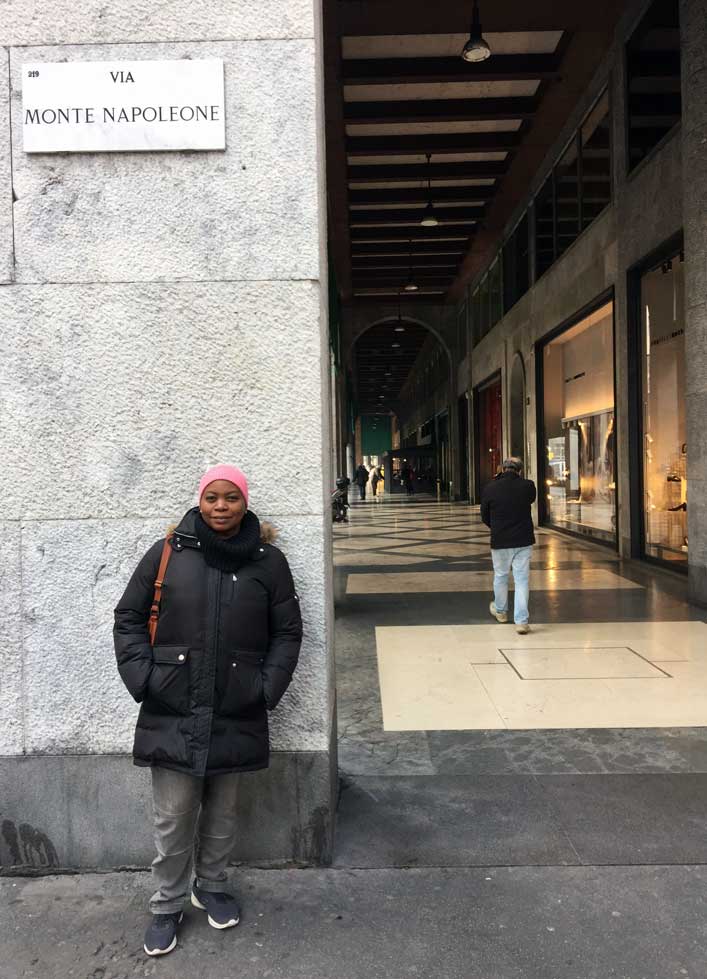 Cold day in Milan. I could only afford to hang out under the Via Montenapoleone sign :-).

Europe’s most expensive street. Via Monte Napoleone is a very upscale shopping street full of high-end boutiques by the biggest names in fashion. Gucci, Louis Vuitton, Piguet and others rub shoulders. A wonderful place to window shop. Federico had flashbacks. He used to work as a private bodyguard when he still lived in Rome and often had to watch over rich oil heiresses and other famously rich people. On the outside looking in then, and we did it again :-). 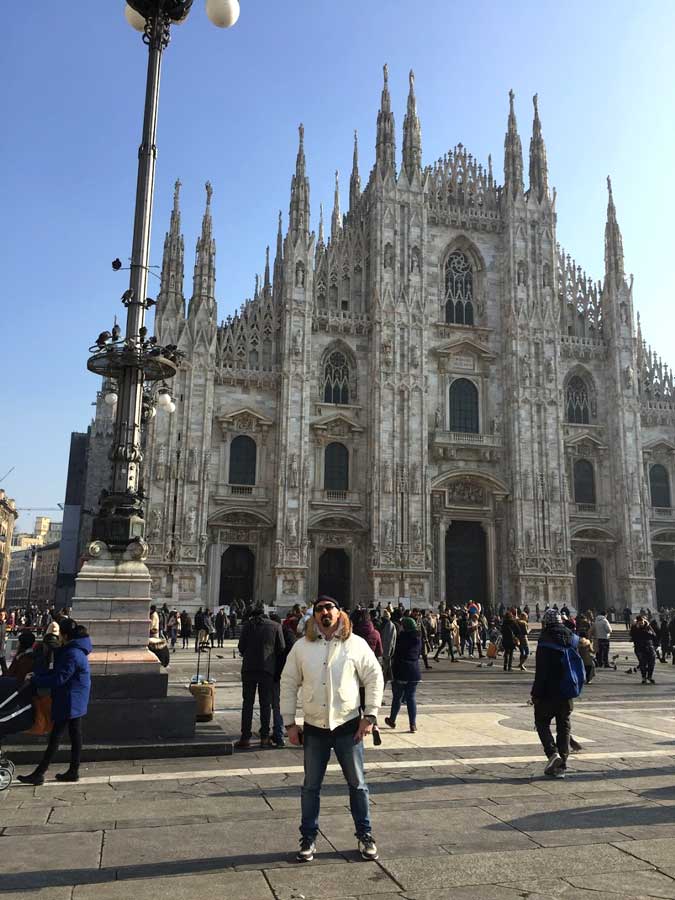 Milan in a day visit. Clearly the most famous attraction in the city is the Duomo. 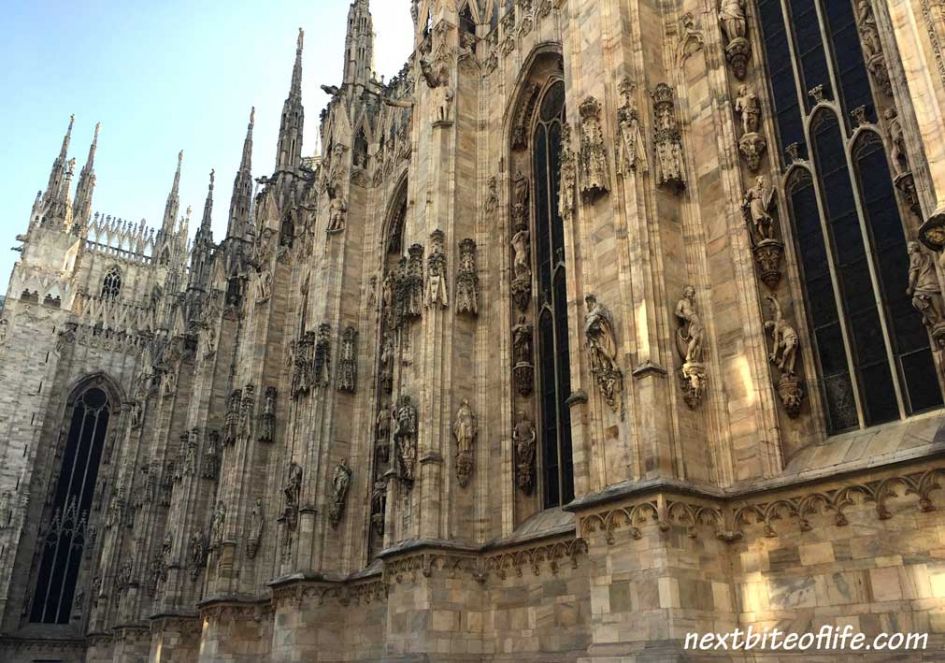 I am reminded of the Seville Cathedral among others that we have been uncles and personal with.

The Duomo di Milano is the most famous landmark in Milan. Dedicated to the St. Mary of the Santa Maria Nasciente. Taking almost 600 years to build, the Duomo is the seat of the Archbishop of Milan. This behemoth church is the largest in Italy. St. Peter’s Basilica in the Vatican doesn’t count, remember Vatican City is a country. It’s definitely one of the most beautiful cathedrals l have ever seen.

We didn’t go inside the Duomo because the line was extremely long, even in January and we’ve seen plenty of other fine cathedrals, but l’m positive it’s beautiful inside as well. You can climb to the top for amazing views of Milan. Entry price for the Cathedral is €3 and you can purchase that, and combination tickets on their website. 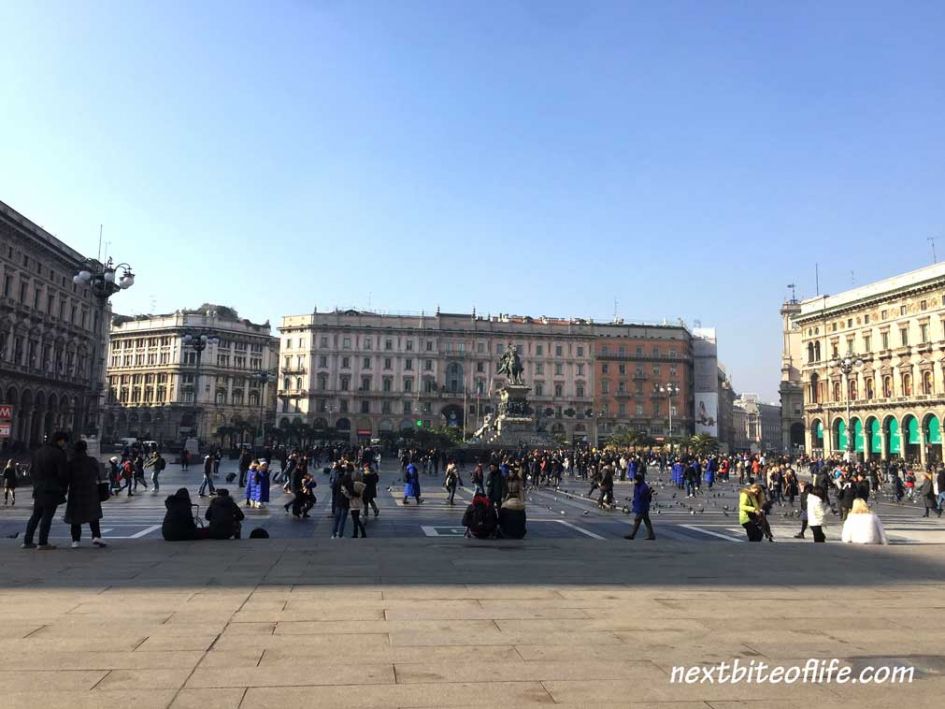 I’m not too fond of pigeons , so l was a bit apprehensive. I love the ground designs at the pizza Duomo though. Reminds me of Lisbon.

Located in the geographic center of Milan and flanked by the Duomo. The piazza del Duomo is a ginormous space (183,000+ square feet) and a gathering point for locals and tourists alike. Grab a coffee or ice cream, mingle with the people and maybe feed the insane number of pigeons. 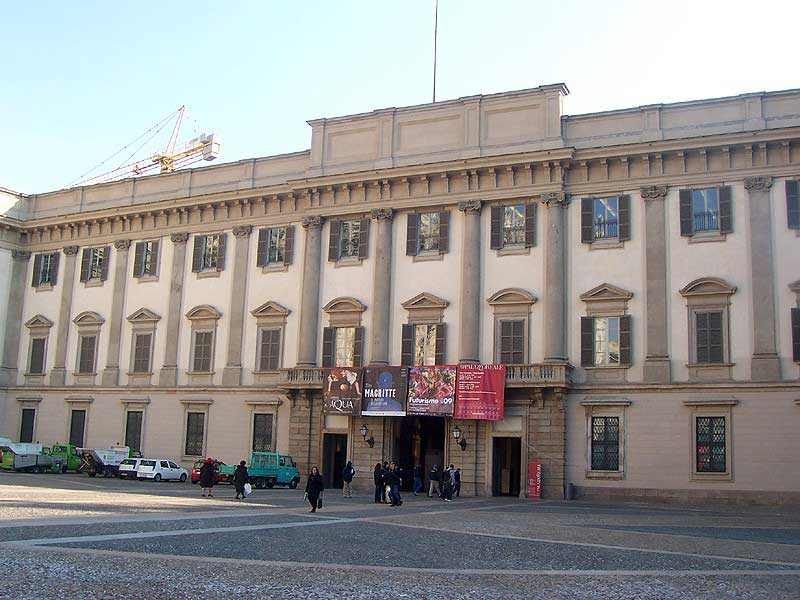 Wikipedia Image of the Milan Royal Palace as mine came out terrible on the phone. 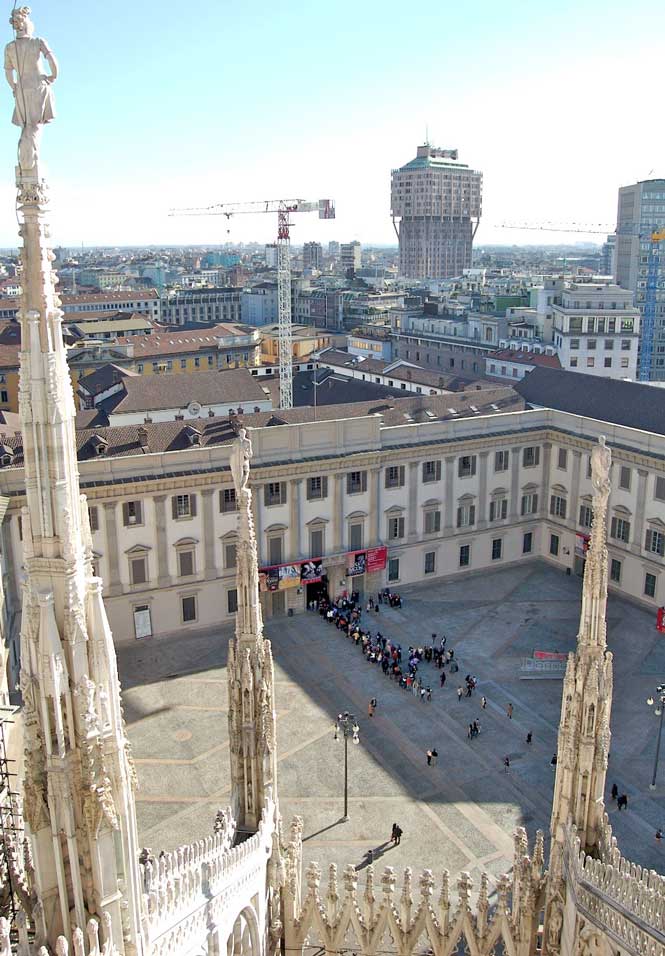 Wikipedia Image – another view of the Royal Palace Milan from atop the Duomo.

The former seat of government in the middle ages and is currently being used for expositions and a cultural center. It is right across from the Duomo. Did you know that part of the royal palace was destroyed so they could build the Duomo? I love how they repurpose buildings in Europe. 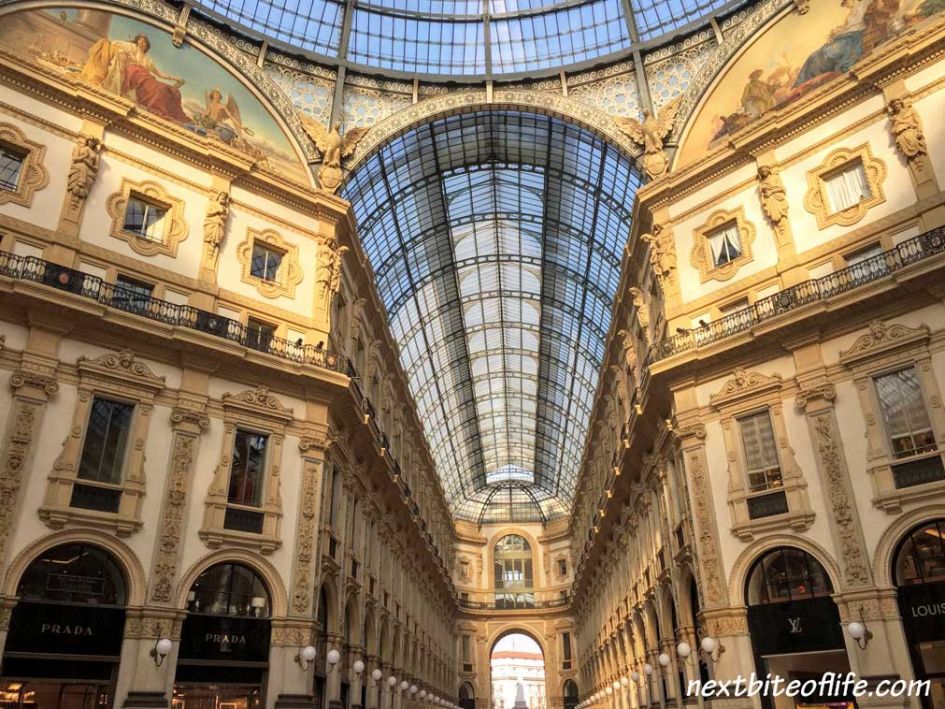 The interior of the Galleria Victor Emanuel II, a must see in Milan. It’s beautiful.

Headed to Milan for more than a day? Click here to find your hotel 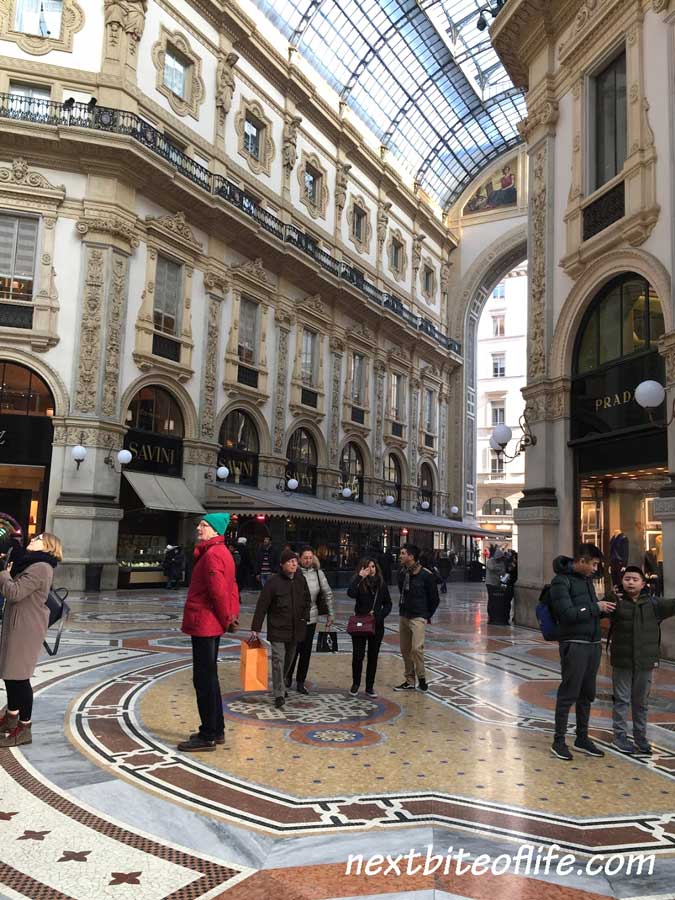 Close to this area to the left, you can amuse yourself by looking for the floor tile with the bull with an open space where the testicles should be. Digging your heel in the hole and spinning around backwards is supposed to bring good luck :-). We saw some people stepping in, but no one spun around, so maybe they will only be half lucky!

One of the best places to see in Milan is the Galleria Vittorio. Italy’s oldest shopping mall that is still in use.  A gorgeous space and one that reminds me of Leadenhall Market in London with all the glass and ironwork. The galleria is named for the first king of the Kingdom of Italy. It was constructed by architect Giussepe Mengoni and was finished in 1867. There are plenty of fancy stores, cafes and restaurants including an always crowded McDonalds. I’m always surprised at how people travel but choose to eat at the same old familiar places like McDonalds instead of trying the local cuisine.

Of course, we did eat very well in Milan. This bruschetta with pesto and tomatoes was awesome, but l wouldn’t have expected any less.

Seeing these landmarks will make for a full day of sightseeing in Milan. Of course, you can stretch it out more leisurely and cover these in two days instead of one. There are other places of interest in Milan to visit that we didn’t get to see, for instance the Teatro alla Scala, the beautiful opera house and the San Siro Stadium (Giussepe Meazza Stadium), home of A.C Milan and Internazionale , the two local soccer teams of Milan. That would have been of great interest to us especially because l like football and he loves it, and we try to squeeze in a stadium tour when we visit new places with famous football clubs that offer tours.  If you prefer touring with a reputable company, we recommend get your guide tours from personal experience. 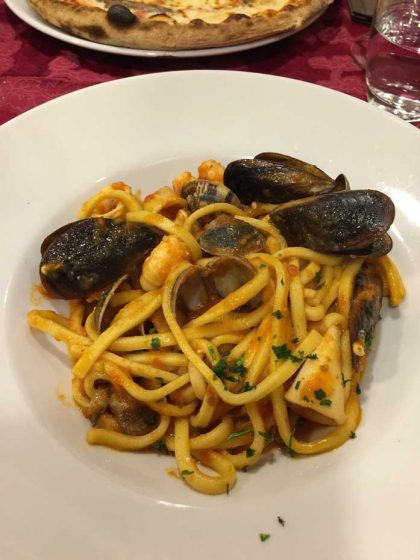 Best seafood spaghetti I have ever had in my life was at this little neighborhood place close to the hotel. They pick you up and drop you back off because it was off the beaten path. Excellent.

Don’t forget travel insurance. Get your quote and protect your trip.

While l enjoyed my time in Milan, and l’m glad l had a chance to visit, it’s a place l wouldn’t purposely choose to visit. Federico on the other hand, likes Milan a lot because he loves fashion. I’m okay with the one-off. It’s kind of expensive too compared to the other cities in Italy that l’ve visited. 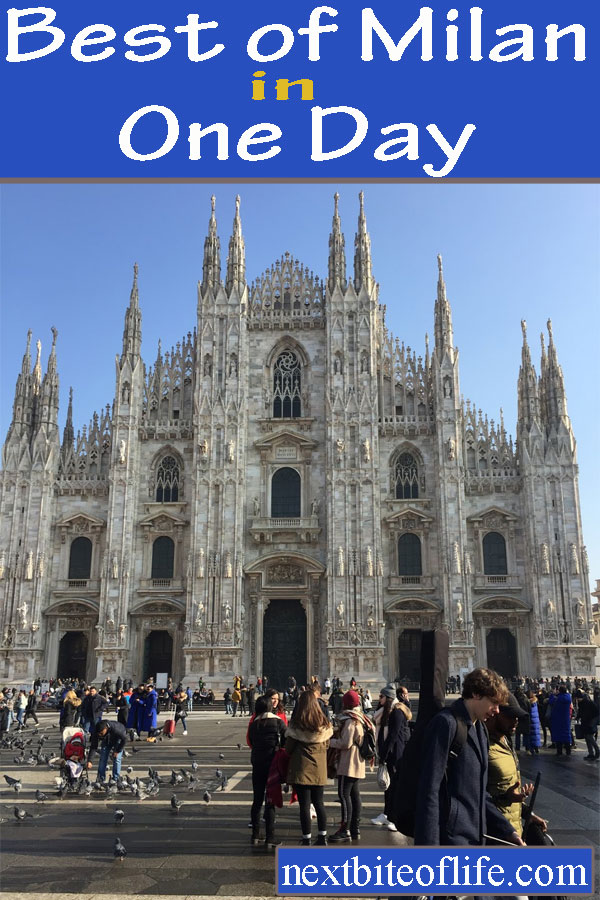 Have you been to Milan? What did you think of the city? Would you recommend it as a must visit in Italy?