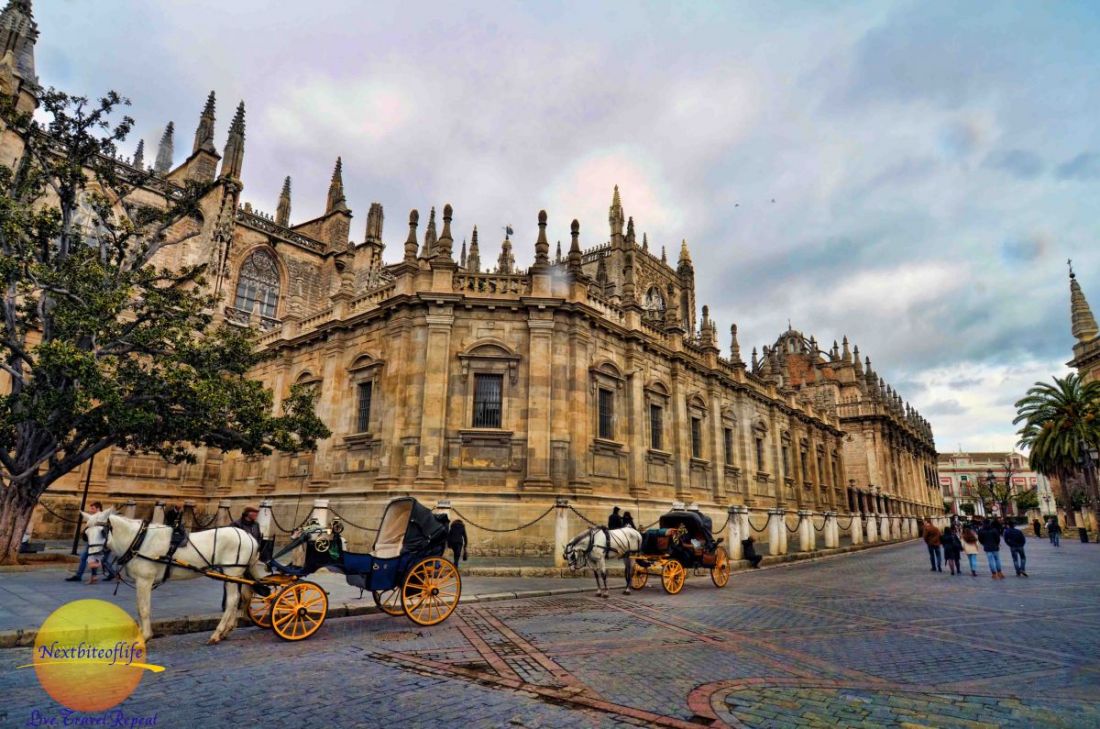 Seville Cathedral legend says: “Hagamos una Iglesia tan hermosa y tan grandios que los que la vieren labrada nos tengan por locos” translates to “Let us build a church so beautiful and so grand that those who see it finished will think we are mad” goes the Seville Cathedral history. I can assure you that they accomplished that!

This was said by the members of the Cathedral chapter as they set about building what would ultimately become the largest Gothic cathedral in the world. The Seville Cathedral was built to demonstrate the wealth of the city and it’s position as a major trading center.

Seville Cathedral and La Giralda are must visit places in Andalusia:

The Seville Cathedral is the largest, technically because the 2 larger ones, namely the Basilica of the National Shrine and St. Peter’s Basilica are not the seats of Bishops. It overtook the Hagia Sophia as the largest cathedral upon its construction which started in 1402. It was over a hundred years in the making, and was finally completed in 1506.

Allot yourself plenty of time to see the wonderful historic icons of  Seville. We spent almost four hours exploring some of the Seville Cathedral over the weekend. We did not get to see everything. It’s that humongous inside.  The Cathedral became a UNESCO world heritage site in 1987.

The Seville Cathedral was combined with the minaret from the ancient mosque that occupied the same space under the Muslim rulers. It was converted into a bell tower and named La Giralda, which means weather vane. The original minaret was built to be a twin of the Koutoubia Mosque in Marrakech, which l have previously written about, so l won’t go through the history again. I feel so lucky to have seen 2 of the original minarets. I am just missing the one in Rabat to complete the set!

The inside of the Seville Cathedral is mind-blowing to say the least. It is so ostentatious, so in your face with its grandeur. I have been to a lot of Cathedrals in my life, but this one has the most gold and silver that l have ever seen. There are so many rooms that you wander into and see  gifts from other cathedrals and men of importance.

All behind glass, with alarm sensors, the gold shimmering for how pure it is. I think it’s safe to say that they are all 24 carats. You can tell they are pure gold. You know that saying that goes “heavy weighs the head that wears the crown”.. yes, l know it’s originally “uneasy is the head..” but the former fits better upon seeing the gold in the crown in one of the rooms. They all bear little plaques as to where the donations come from. The one below is from an Italian Bishop.

Find the best priced hotels for your dates in Seville.

There was no flash allowed inside, and it is wicked dark in there, so some of the images may not be as crisp as l would have hoped for.

Get your free quote on Travel Insurance

We decided to climb to the top of the La Giralda bell tower. I had been hoping there was an escalator 😉 , but alas..there was none to be found. I was still game and we climbed..and climbed.. It wasn’t too bad though, l must say. It’s the heat that kills you.

There are 34 floors in all, but it wasn’t traditional stairs. Instead it was a series of slightly inclined ramps. We found out later that it was built that way, wide enough for two guards on horseback to pass. I certainly couldn’t imagine if the guards had to walk up there to ring the bells :-(.

It was boiling hot all along the way up, but my pride wouldn’t let me give up. Since living in Spain, l have taken to carrying a hand fan with me, and l can tell you l was the envy of people trudging along. Even Federico was happy, and moved behind me, so he could get the benefit of the wind. It’s just so crowded, one line of people going up, and one line coming down, so it’s tight. There are little alcoves on the way up though, so you can stop and take a breather if you have to. Seville is quite hot right now, so the crowd, though thick,  was not as bad as during high season.

Helpful hints if you want to climb up the Giralda Tower:

– Bring water! I so wished l had thought of that, and was so jealous of the people who had water bottles with them.  You are so thirsty after you get up there.

– Bring a hand fan if you can. At the very least,  tissue to wipe your face with, or a handkerchief. You’ll be happy you did.

– Wear the right shoes. There were so many women who were hugging the wall, thanks to the high heels etc. That’s always fun to watch :-). Leave the fancy shoes to the Sevillanos, as they know how to navigate the cobblestones.

The views from the top are awesome. It is definitely worth the climb up, just to see the architecture of the Cathedral from the top. I loved seeing the gargoyles and the garden below. Access to the Giralda tower is included in the price of entry to the Seville Cathedral.

Fun Historical Facts about the Seville Cathedral and La Giralda:

– The clergy of the parish gave half of their stipends to cover the costs for the craftsmen, laborers and architects etc. of building the church.

– The longest nave of any cathedral in Spain is on the inside of this cathedral. It is 42 meters high!

– The altarpiece was the life long work of a Flemish craftsman Pierre Dancart. It took him 44 years, and only at the end was he helped by other artists. It shows scenes from the old testament and the lives of saints. This thing is insanely big, and you are literally blinded by the bling of all that gold. It was hard to get the full height of the piece , even crouched down.

– The tomb of Christopher Columbus is inside of the Seville Cathedral. His body was brought here from Havana in the 1890’s. He is being carried by four statues. They represent the kingdoms of Aragon, Castille, Leon and Navarra. He was also a very, very  short man unless they crumpled his body, that tomb looked pretty short to me!

– The Patio de los Naranjos (Orange Courtyard) was the original courtyard of the prior ancient mosque.

– La Giralda was one of the few things that survived intact after the earthquake. Christian symbols were added to the spire. Prior to the Christians conquest, the Muslim rulers wanted to destroy the minaret, so it wouldn’t be desecrated. It was prevented by then King Alfonso X who declared that “if they removed a single stone, they would all be put to the sword”. Yeah for the King :-).

– La Giralda is considered to be the most beautiful of the three minarets. I have only seen two, and l can’t decide which one looks better to tell the truth.

– The Seville Cathedral has a total of fifteen doors! We saw just a few.

The door of Baptism depicts the baptism of Jesus. There are sculptures of Saints Isidore and Leander, and the sister Saints Justa and Rufina. We saw the Door of Saint Miguel as well. Trust me when l say it looks exactly like this one, so l won’t add it.

– The Seville Cathedral has 80 chapels! I told you it was big. Up to 500 masses were said daily.

– The statue at the top of the bellfry is called “El Giraldillo. It was installed in 1568 to represent the triumph of the Christian faith. The architect was Hernan Ruiz the Younger.

You could easily spend all day in the Seville Cathedral and La Giralda if you choose. We were tired and especially thirsty so we didn’t. The other reason is that my mother in law is visiting from Rome in a couple of weeks. We will therefore be headed back there with her. This way, we can do some newer parts and climb atop the Cathedral for a different view. Is tLa Giralda and Seville Cathedral worth visiting? Yes it is. I consider them two of the best things to do in Seville and should be part of your itinerary.  I highly recommend you checking out these jewels of Seville. You won’t be disappointed.

Seville cathedral Free Monday: If your holiday in Seville falls on a Monday, take advantage of the free entry Mondays at the Seville Cathedral and Alcazar. Tip: Reserve and skip the line.

If you want the deeper experience with a tour guide, consider our partner company who can tailor the tours to your needs or you can be part of a group. 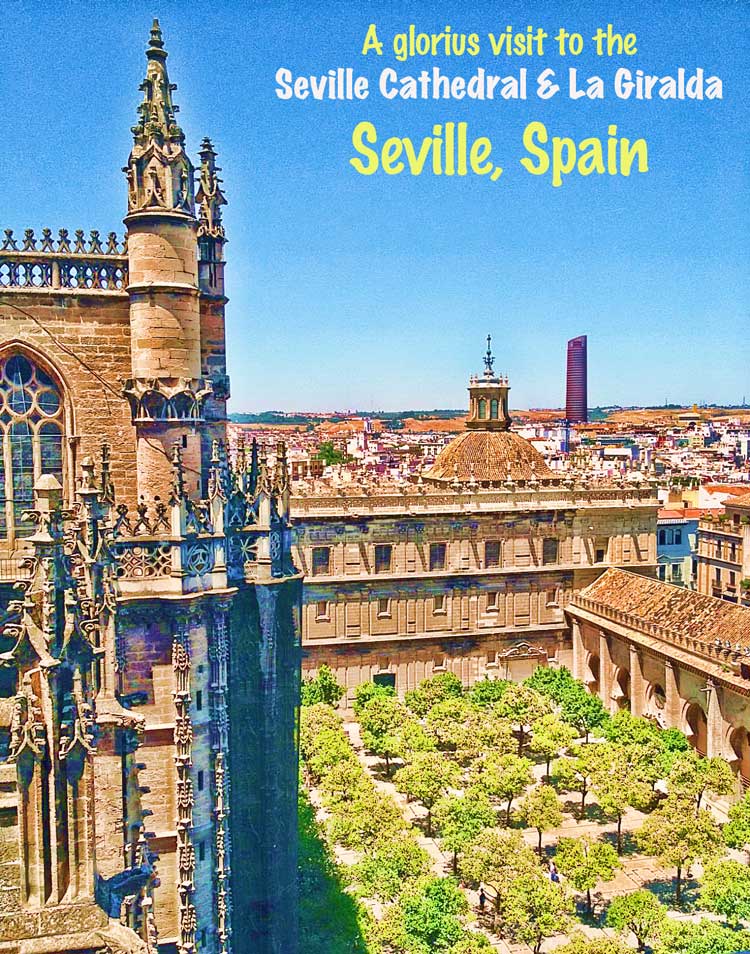 Have you been to Seville? If yes, did you visit the Seville Cathedral and La Giralda?