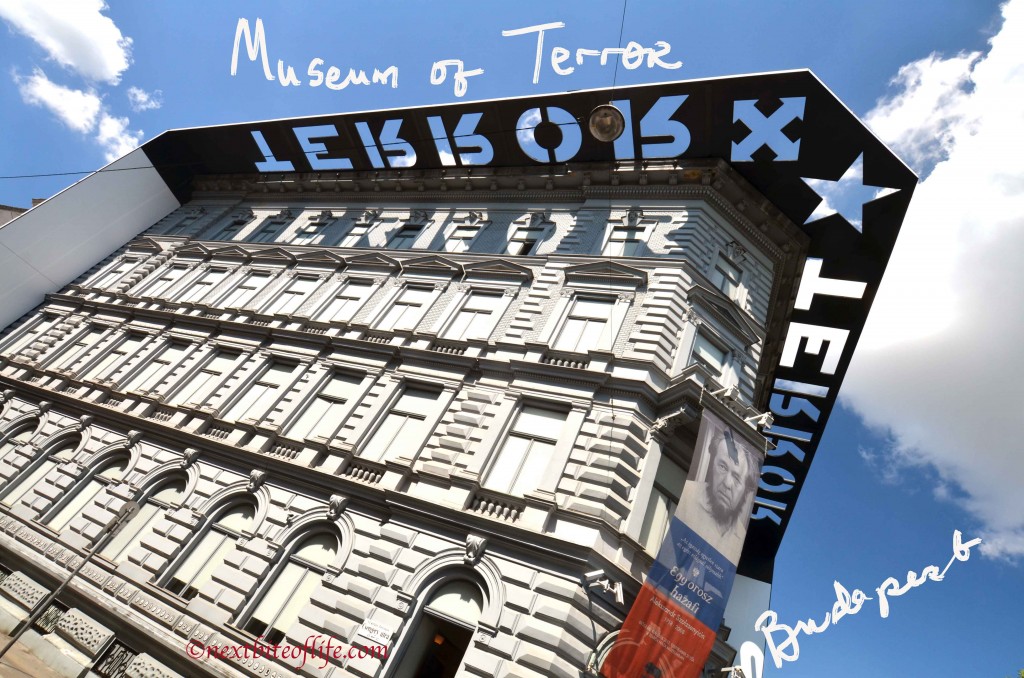 House of Terror (Museum of Terror) building in Budapest 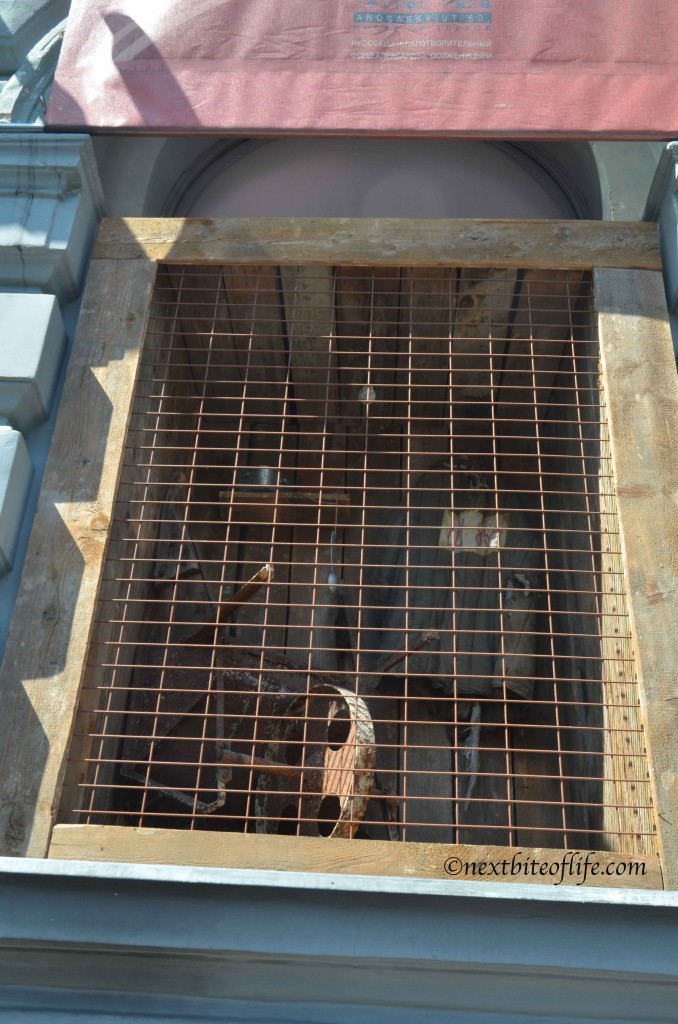 House of Terror is now also known as the Museum of Terror. An imposing gray building on the famous Andrassy Boulevard, it is located between downtown (Octagon) and Heroes Square. It has served as a true house of horror through different regimes in Hungary.

It served as the headquarters for the Hungarian Nazis and was known then as the House of Loyalty. It subsequently served as the party headquarters of the communist terror organization known as AVO, and the next group of bastards, the AVH.

It is so sad that this building sits right smack dab in the middle of stately homes and mansions which l am sure was exactly why it became a house of terror. You can bet they wanted the best for themselves. People in the area had their homes seized and were tortured and killed in this house.

Others ended up being sent to their gruesome deaths at the Nazi death camps. During World War 2, whilst under Nazi rule, the house of terror cellar continued to be a death house of sorts. Jewish people were forced to wear a yellow star and a lot were thrown into the Danube river.

A monument to the victims in the form of footwear is along the river as l wrote previously.  Things were no better under the Soviet rule. Many more thousands died at the hands of the State security officers.

Photography is not allowed in the building, so we had to be sneaky to get you these shots. I think they might have meant flash wasn’t allowed, as the others in there were taking pictures and we were being followed by the guards but they did not say anything. The cameras were quite obvious. Cloak and dagger stuff.. :-) 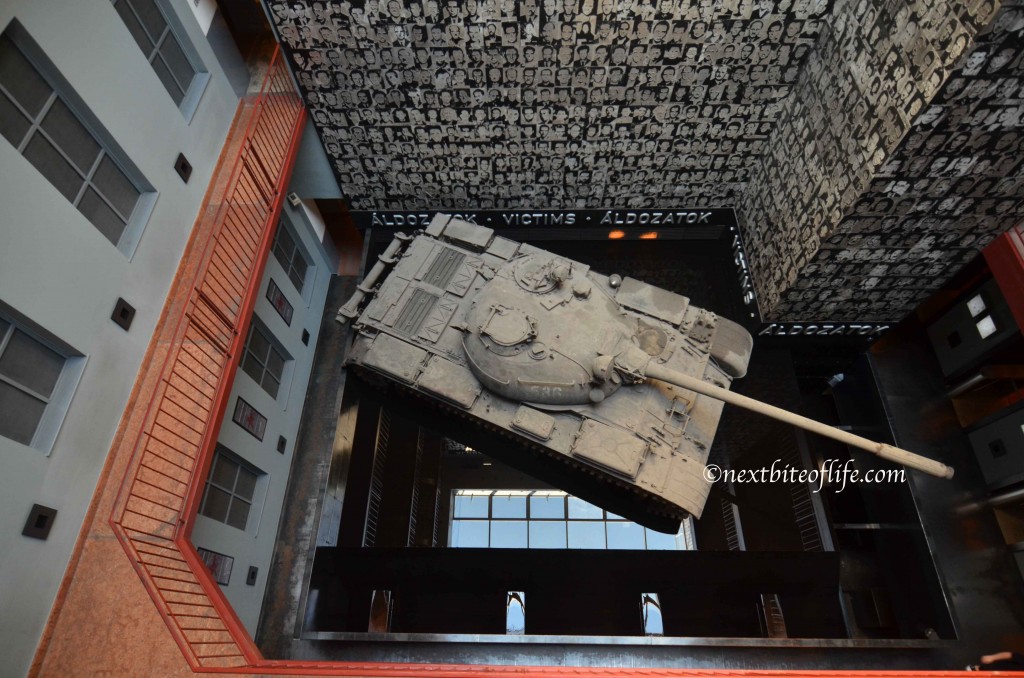 This Hungarian national museum is quite fascinating to visit. A war tank sits ominously.

House of Terror Budapest History is not a pretty one at all. It is quite somber in the building. Upon entrance, you see the big army tank in the middle of the interior courtyard. Pictures of innocent victims envelope the walls. Some of them just have names with place holders, not even a picture to identify them.

Once inside the house, there are television screens featuring survivors of these horrific times recounting their stories. It is so hard not to be moved by them. One poor man was used as an ashtray by a particularly sadistic officer. He would be made to kneel down holding an ashtray everywhere this officer went, and more often than not, the cigarette would be stubbed out on this man’s neck, arms, anywhere he desired to the amusement of his fellow officers.

It is amazing the resistance of the human spirit. It’s hard to imagine how people survive that and live to tell the tale. 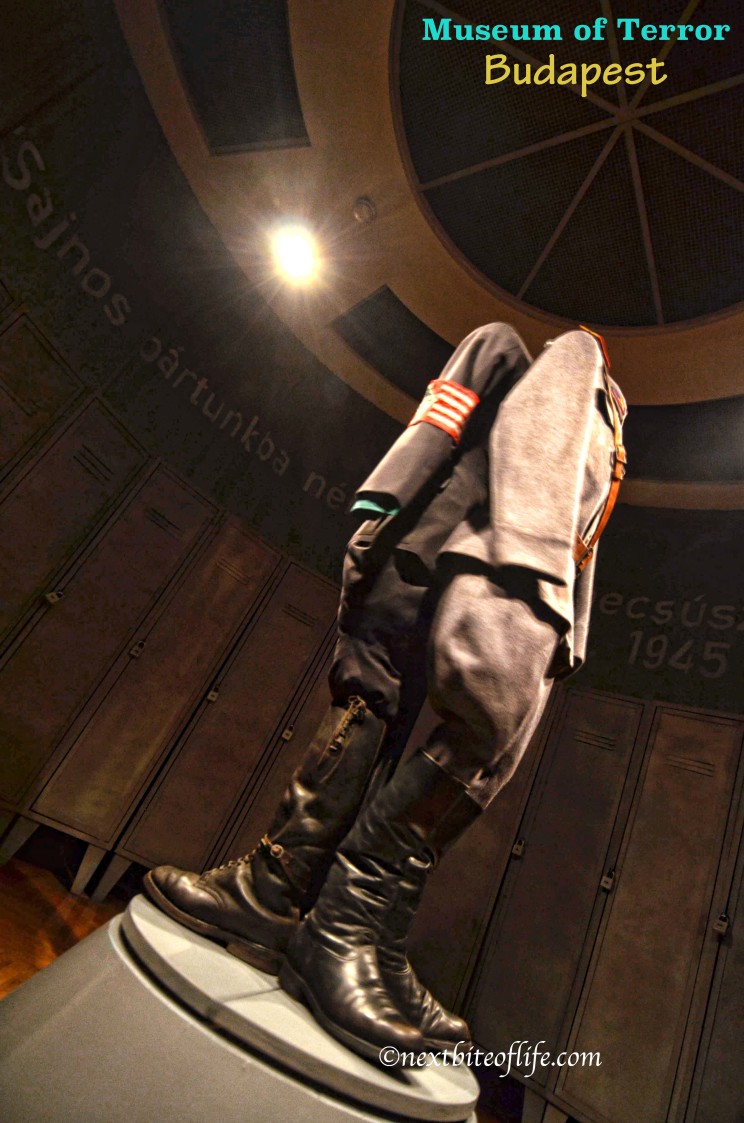 Horror house Budapest. Initially, the uniforms were gray, eventually changing to a sand color, hence “turncoat” after being trained to be merciless. 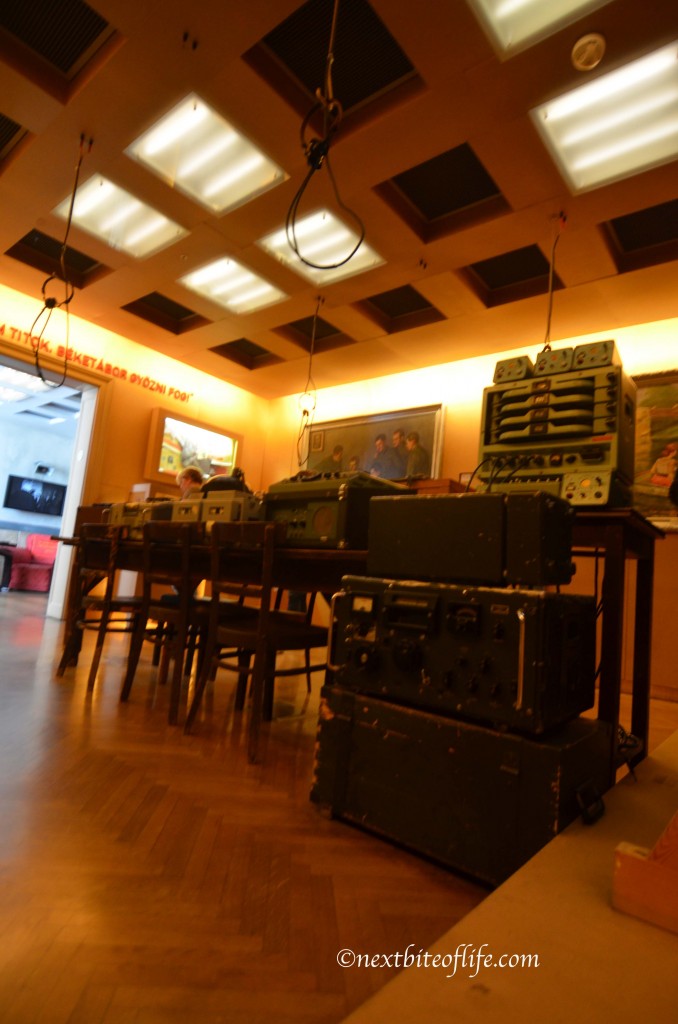 Electronic listening devices in the museum of terror interior. They spied on everyone! 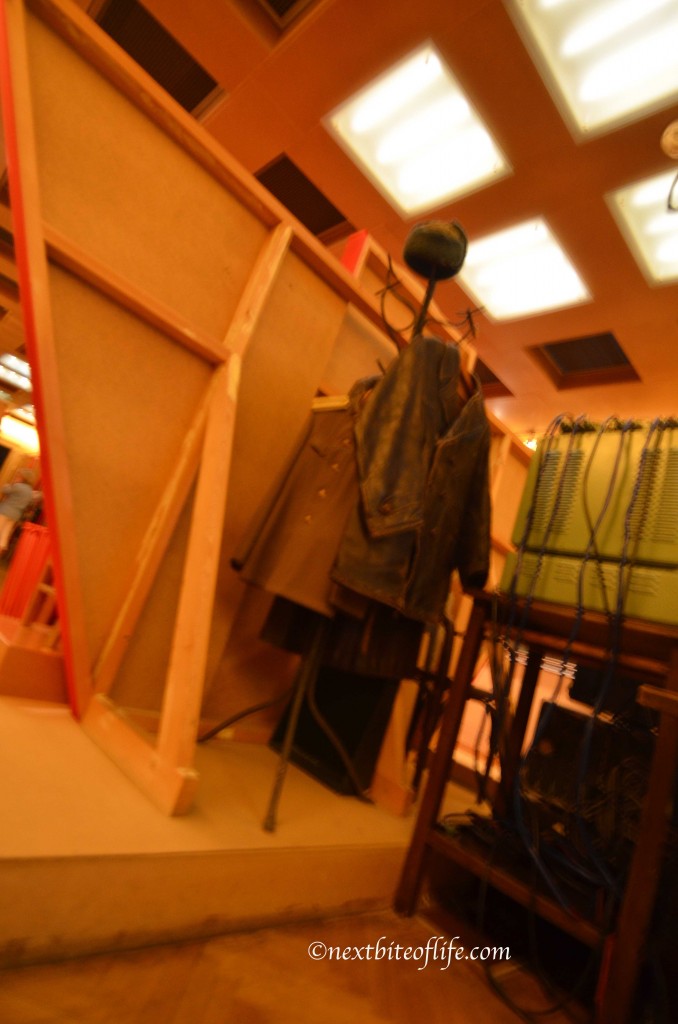 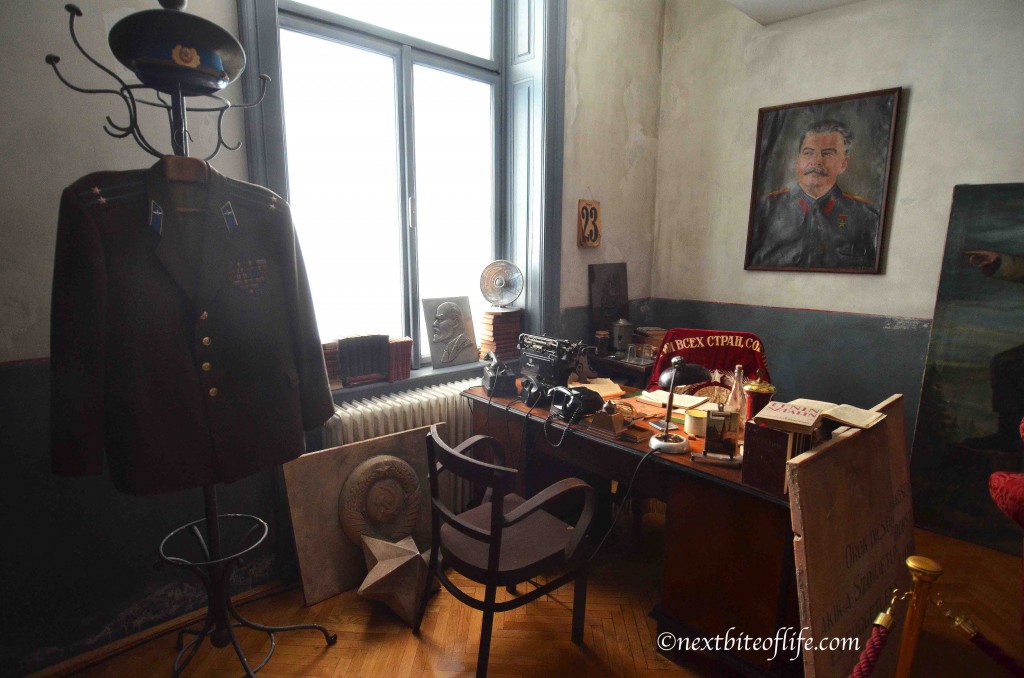 I think this was Gabor Peter’s office in the House of Terror museum, the leader. Later imprisoned, but unfortunately released years later. 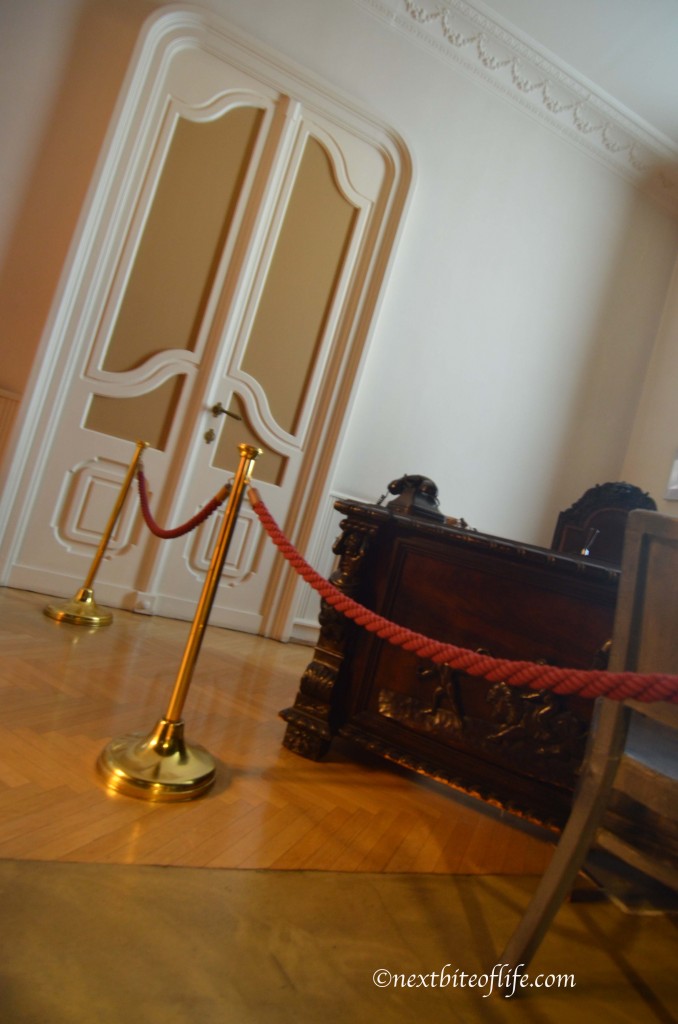 It’s amazing how these asshats had such lovely offices but denied it to others, all Budapest’s terrifying past. 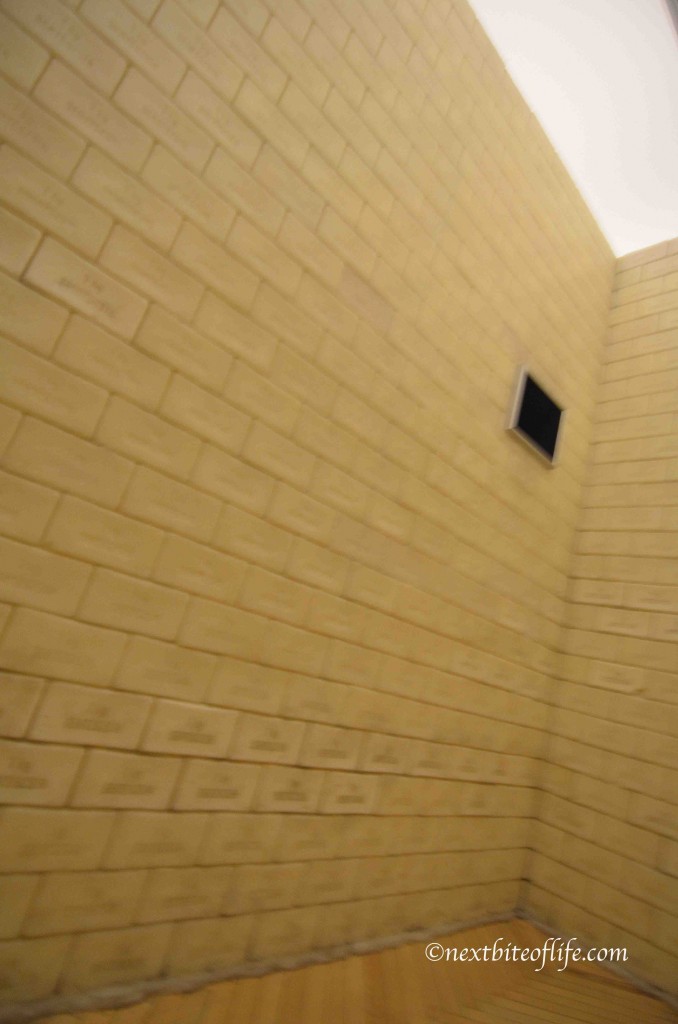 These were a series of shower stalls almost and each bar looked like soap, stamped with 1kg. No idea what it means. 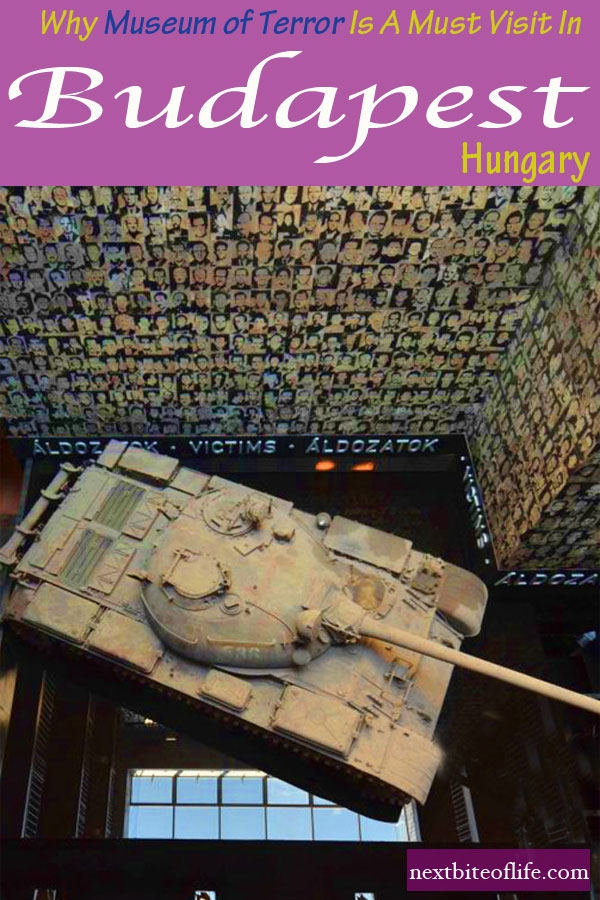 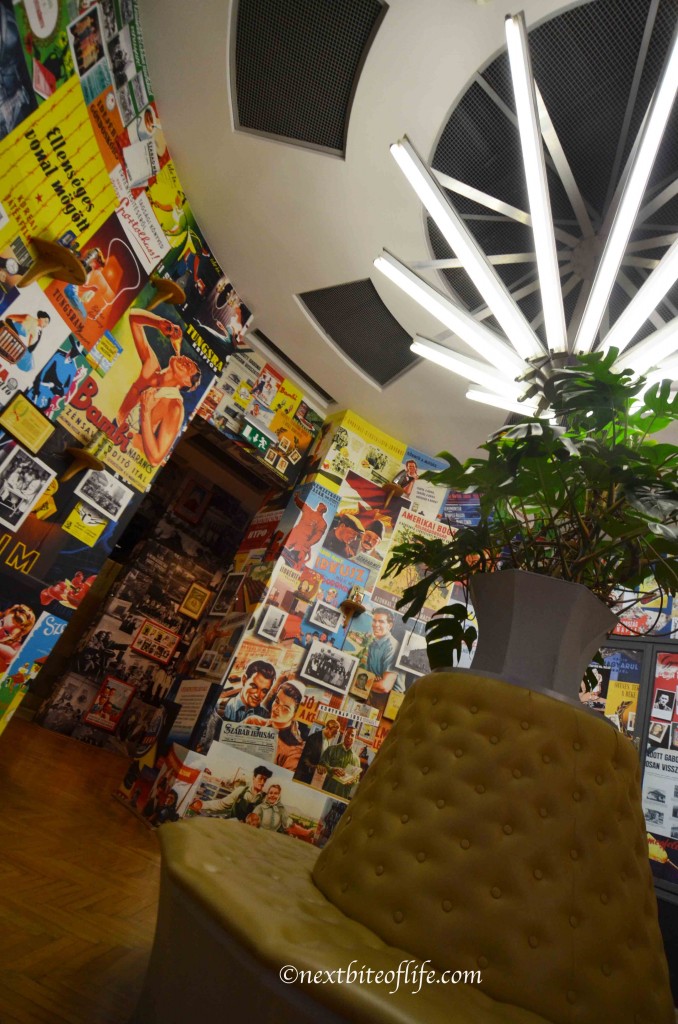 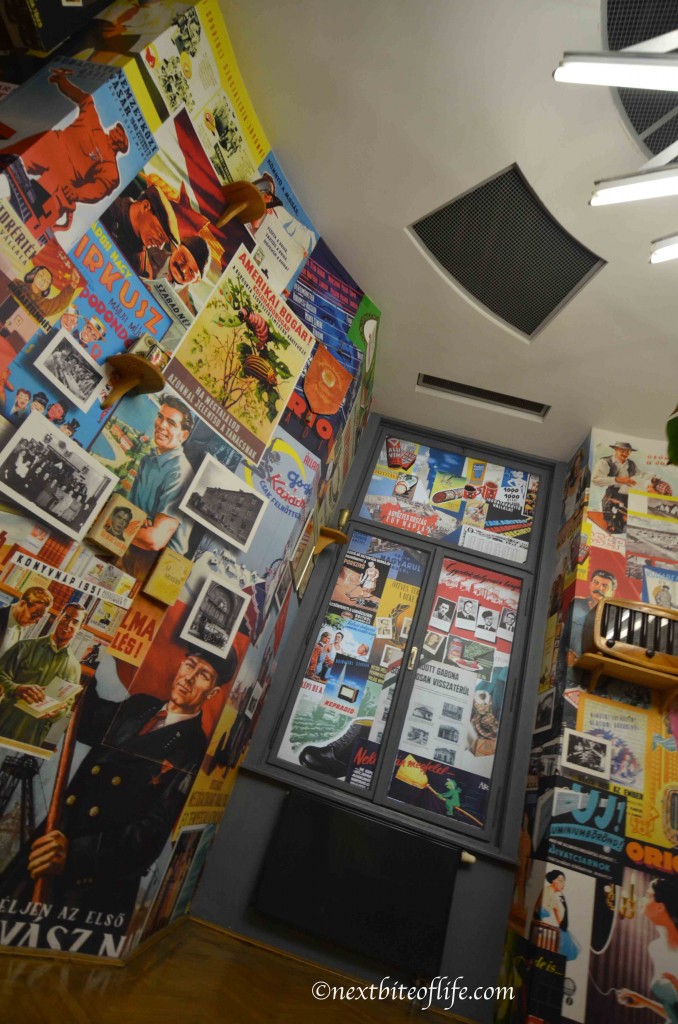 There were some rooms in the cellar that were so dark, you couldn’t see a thing. One of them was just enough to fit a person, just the outline of the body, you couldn’t stretch your arms or anything, it was like maybe 2 feet wide and 6 feet tall, with the slightest slit of an opening on the door, maybe 8 inches, just enough for the person to see out. One crazy guy actually went in the cell and asked my husband to shut him in. He said those seconds were hell. Imagine being left there for days. 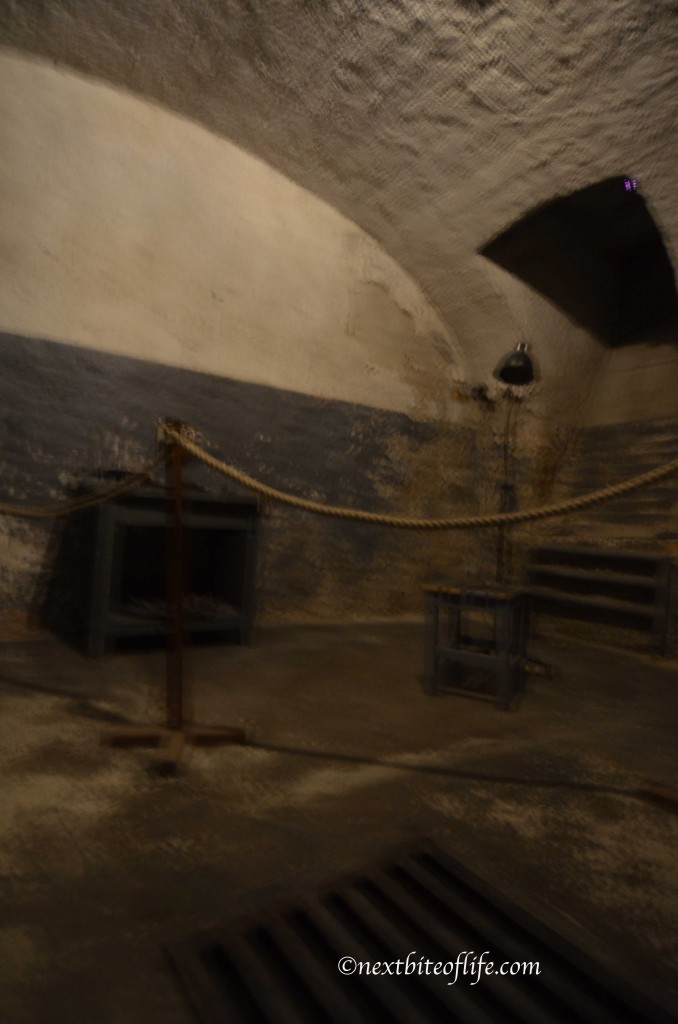 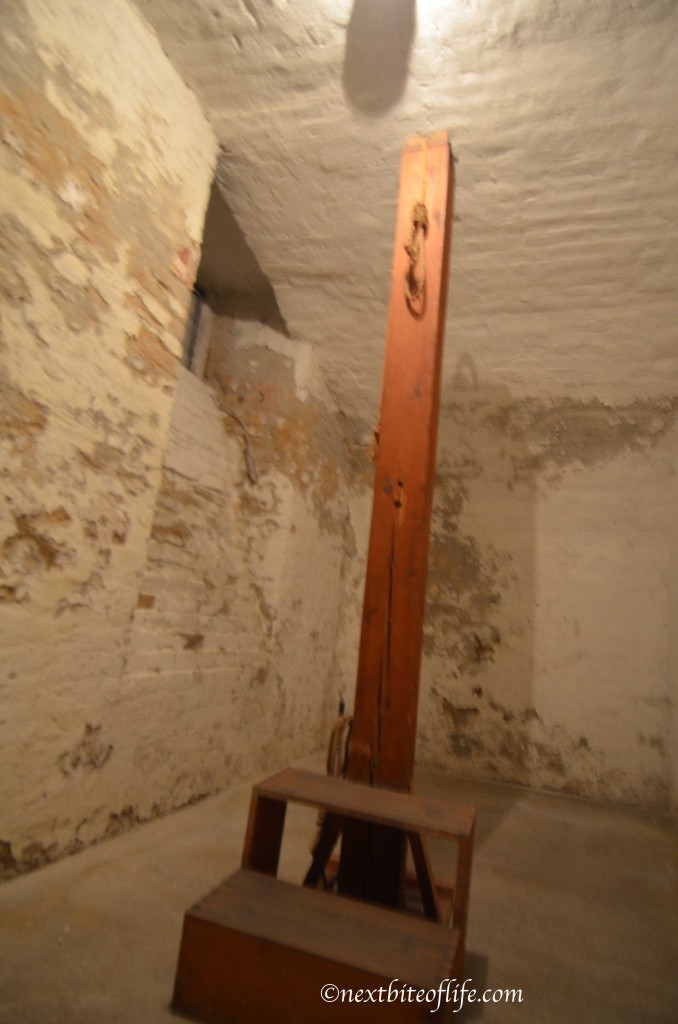 An actual gallows used to hang people at the terror museum Budapest, then a doctor would write “clinical death” as the cause of death.

One of the things that thrilled me no end to know was that even some of these officers could not escape the same fate. As time went by, they turned on each other and were tortured with the very same methods by their underlings.

I was so glad we went to the house of terror on this visit. We had only passed it by on our prior visit as we didn’t have enough time. The house of terror museum Budapest  entrance fee was €9. You can find more information on this museum in English at this site. 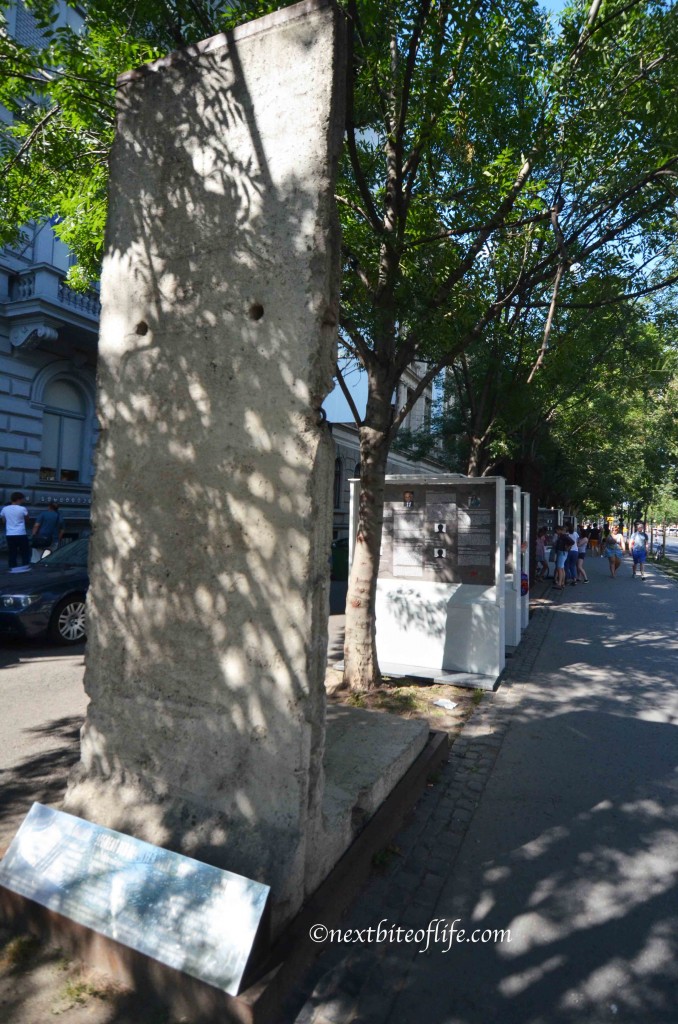 A piece of the Berlin Wall outside the house of terror. A visit to the horror museum should be on your Budapest itinerary. 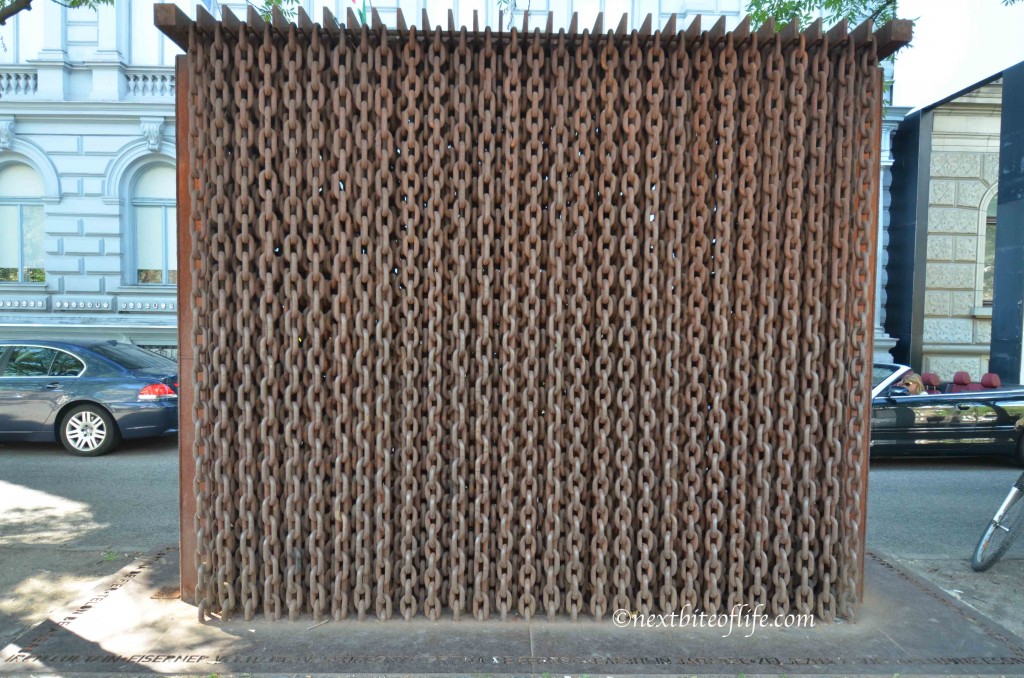 Chain Wall outside of the museum of terror. The reign of terror lasted through WWII 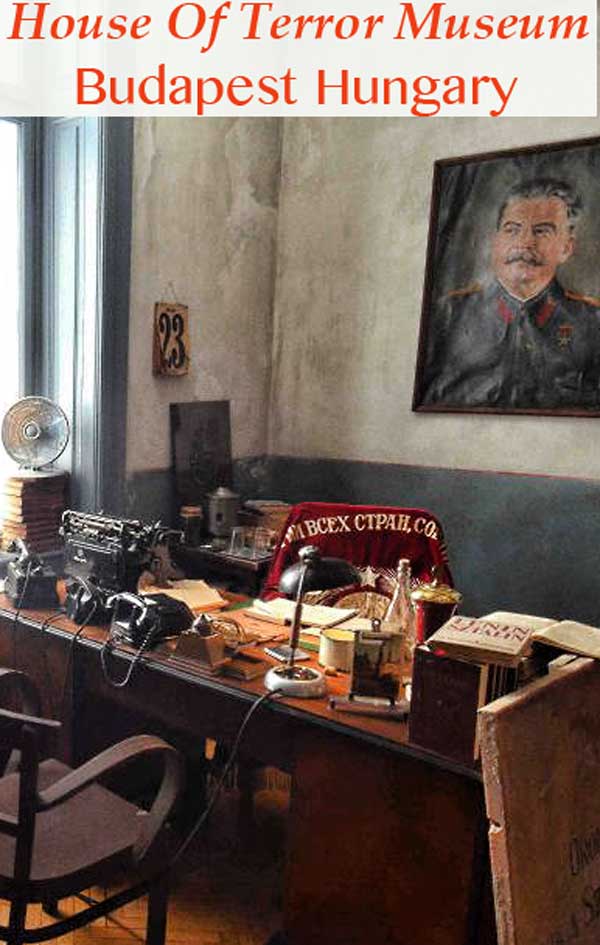 I’m not a history buff, but l found House of Terror Budapest very educational. How about you? Is this something that you would be interested in seeing?