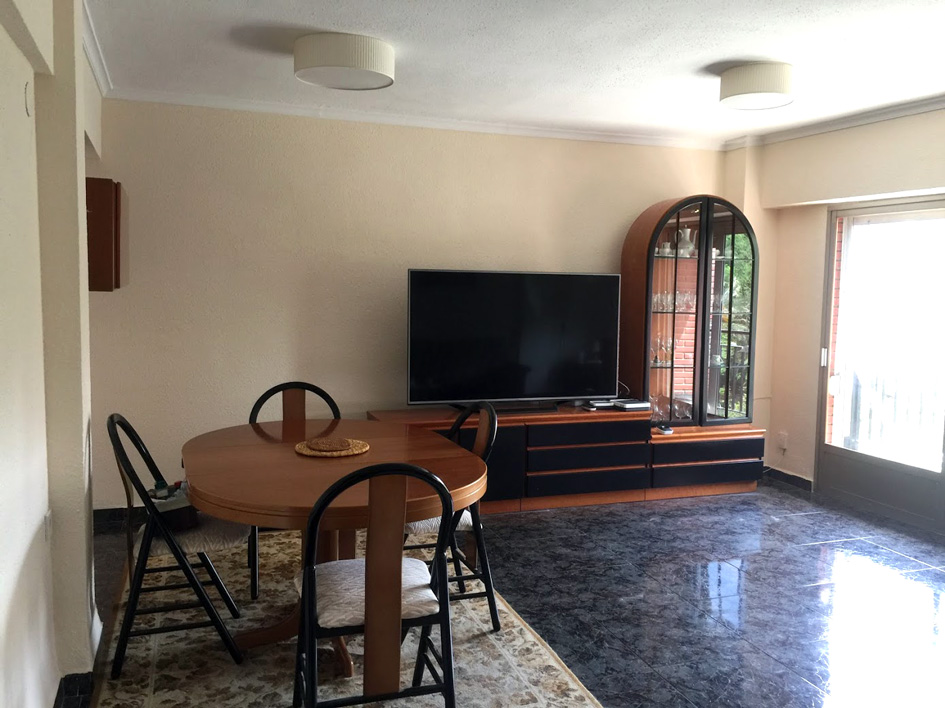 After what seemed like eons instead of just over three weeks, we have finally moved into our new home in Valencia. It feels freaking fantastic and we feel so accomplished to have pulled it off with limited Spanish and determination. True, it wasn’t a total gut job, but it was tricky enough to make one apprehensive. Here are pictures of our “new to us” remodelled Valencia flat. 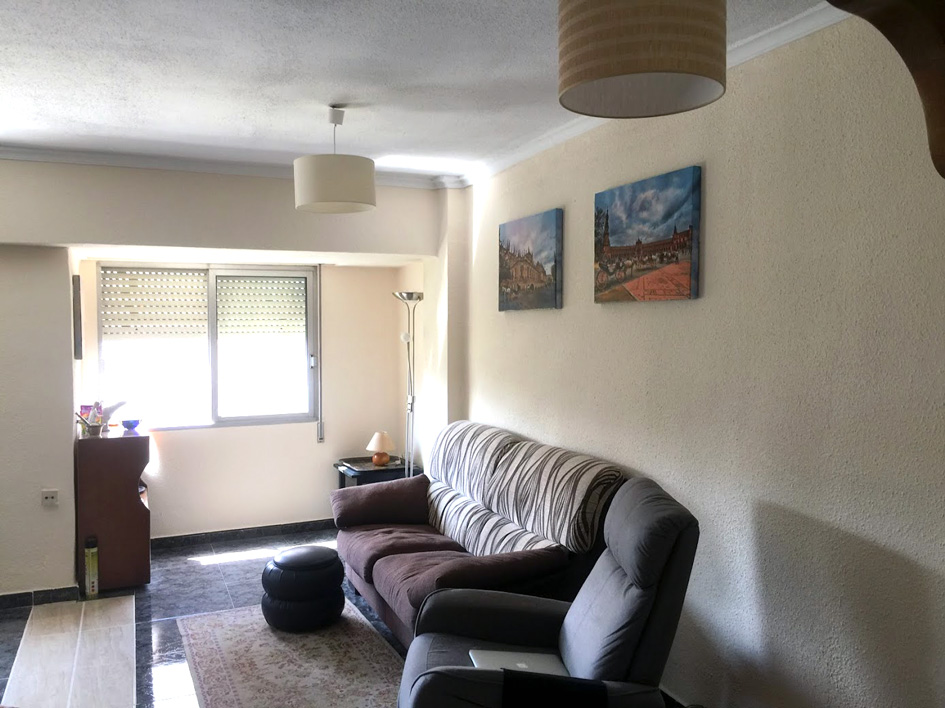 Where the third room used to be. I love the fact that blinding sun and warmth streams in. Notice the window is closed and it’s full summer. It gets cold believe it or not, which makes me fear for winter!. You can see the cups hanging not so nicely which irks me.

The apartment itself is located close to the lung of the city namely the City of Arts and Sciences. While not in the very thick of things, it is walkable to the trendy area of Russafa. There are several hotels nearby so we do see a few tourists, but the neighbourhood is mostly locals. Walking the dogs, I have met a few of them who insist on conversing in Spanish and l am trying my best to keep up and pick up a few words here and there, through miming and bad grammar. They tend to understand me though, so l’m happy.

Affiliate links are contained in this post. If you purchase using the links, we make a small referral commission.

Here is the entrance to the flat. We didn’t do anything major, just painting  as noted on a previous post. We kept the mirror and Chinese cabinet because you can never have enough storage. 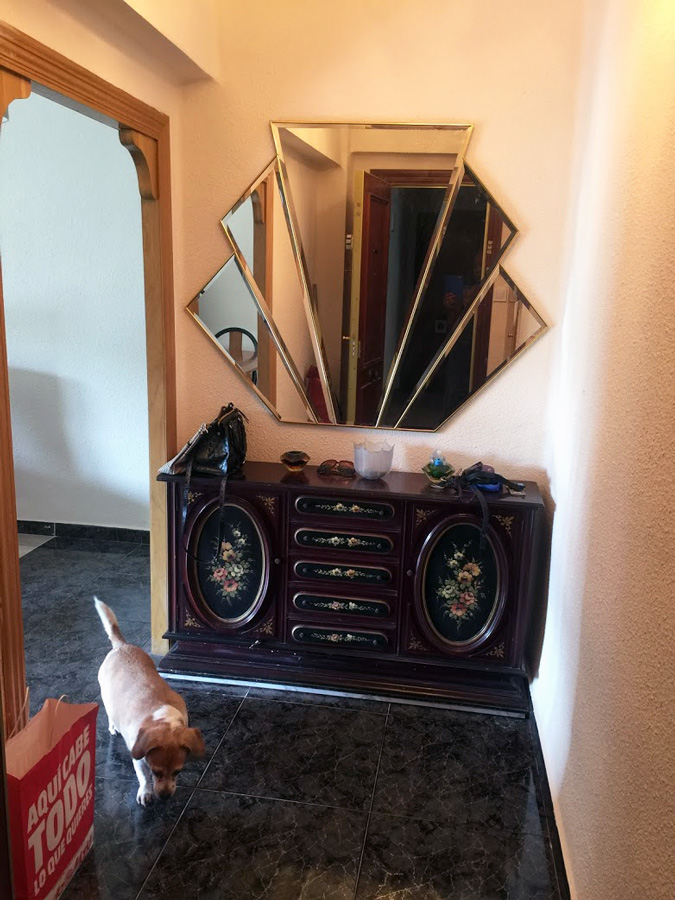 Old fashioned maybe, but we’re keeping it! :-). My shadow follows always for protection or something..haha!

The living room is where most of the change occurred. We both love the airy feel to it now that it’s roomier. The light colour makes it feel even bigger plus the addition of the former bedroom window brings a lot of natural light.

I think getting rid of the third bedroom was the best thing we could have done to be honest. The old owners were using it as a sewing and game room. We have a very old sewing machine in mint condition that we couldn’t bare to get rid of. Here is a video l made of the living room.

Read about our purchase process here

The hallway also benefitted from painting. It was already painted white, so the creme is not much of a departure, but it does bring a cohesiveness to the whole flat. The long row of cabinets have been wonderful for storing our many, many, pairs of shoes. You can see the door that we repurposed at the end of the hall. This belonged to the now gone bedroom. The door hinges had to be flipped because we needed it to be attached to the left side of the wall. 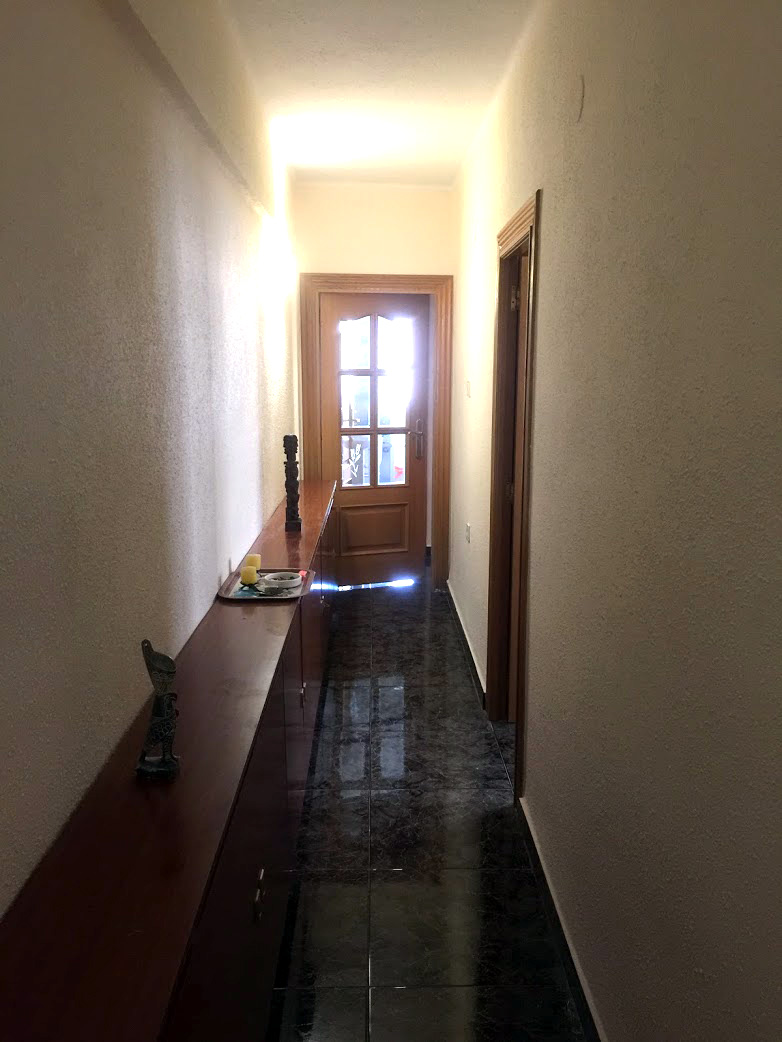 You can see the “new” door. Perfect place for it to have ourselves a suite without much effort. The fact that it has glass inserts lets in so much light.

My little pet peeve is that you need to practically bang the door shut, which is both annoying and loud. The contractor claims it’s the best he can do. We don’t mind too much because we only close it once daily at night when we go to sleep. At some point, we probably have to get a curtain for it for when we have guests and want privacy moving from the bathroom to the bedroom.

The kitchen also had little done to it. Federico loves his new gas oven and stovetop. We opted for separate pieces like they had before because we didn’t want them breaking the marble. The kitchen feels younger now that all the ancient appliances are gone. He has been baking on an almost daily basis :-). Chicken, lasagna, cakes, pizza…you name it! 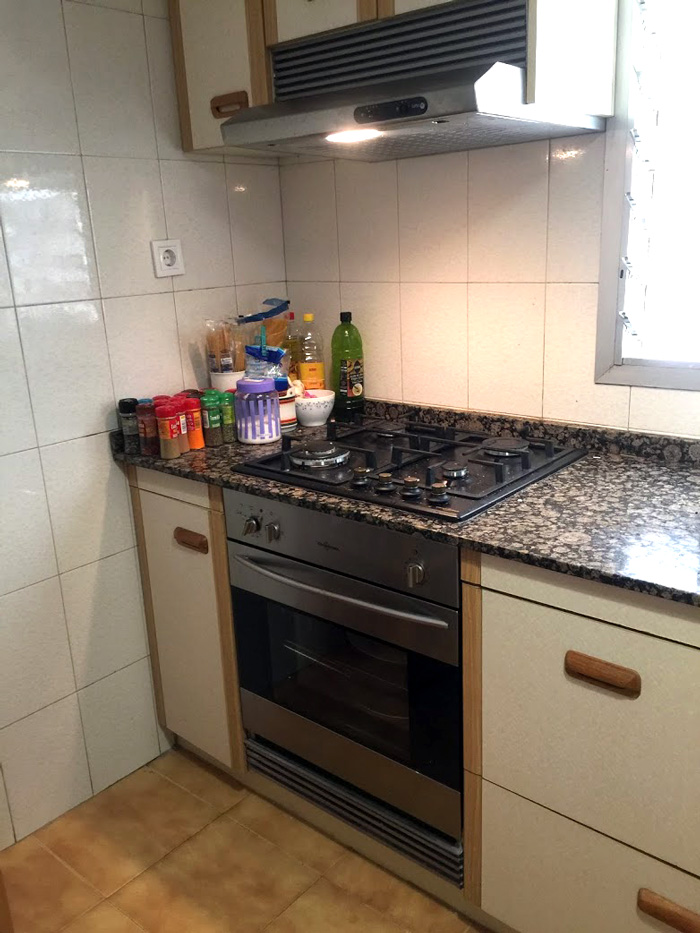 We almost went for the stainless steel stovetop too, but it shows more dirt quickly and l just sort of love the black, so black it was. It has the igniter too, so no more search for the lighter.

The guest room also got a paint job. At some point, we want to hang the television so we can actually use it and not have it blocked by the computer. Can you believe my Mac is now 13 years old? We recently had to replace the hard drive for the second time and so once again,  it has a new lease on life. Hopefully, we’ll get at least another five years of use like the last time. I did lose about twelve chapters of a new novel thanks to my stupidity and forgetting to backup :-(. 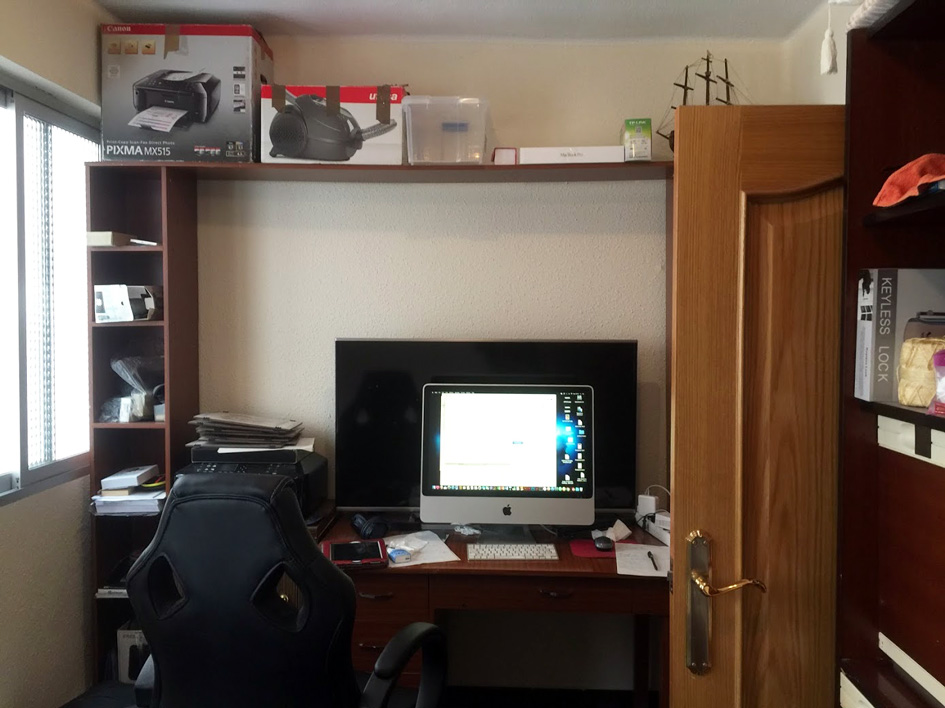 I am showing the office side as the bigger beagle and l are having a turf war. He insists on sleeping on the bed every chance he gets and l chase him and the cycle repeats and l don’t have the energy to fix it up right now. :-). The vacuum they left is so much better than we one we had!

The bedroom definitely benefited from the paint job. I hated that salmon colour. We splurged on a king-size mattress and put our old queen sized in the guest room. They had 2 full size beds in there prior but we just put the bases together and it not only saved money, but looks good plus l doubt if they would have been able to get in a king size frame through the door.

Something to think about if you plan on being retired in the Spanish city of Valencia, and Seville for that matter. I remember the first thing our landlord warned against was buying too big a bed. They don’t fit in the doorway plus the rooms are smaller so you won’t have room to move around. 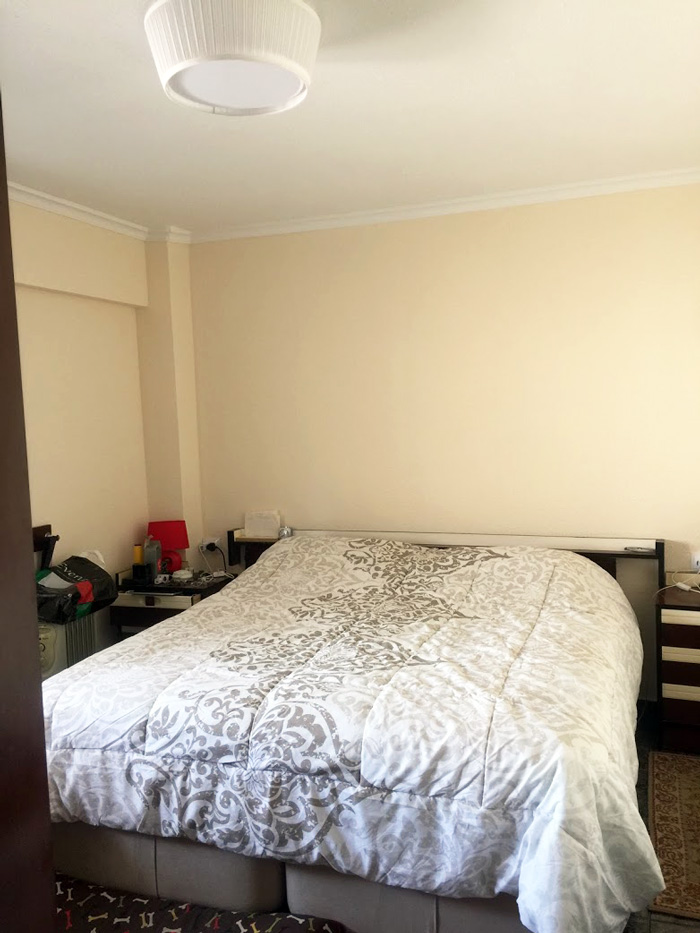 We kept the side tables and matching headboard and wardrobe. They looked to dark with the previous salmon, but now..they look just fine to us.

If you’re thinking about retiring in Spain, consider purchasing our new eBook that walks you through the steps and prepares you for your new exciting life.

There are a few things l am not super happy about with the remodel. They are minor things and l notice them less and less. In addition to the sticky door l mentioned earlier,  one of the hallway lights was done sloppily. The white base sticks out on one side, and the wrong side at that!. The prior light fixture was a long bar with lights, they could have patched the hole, or at least have the showing part on the other side :-). 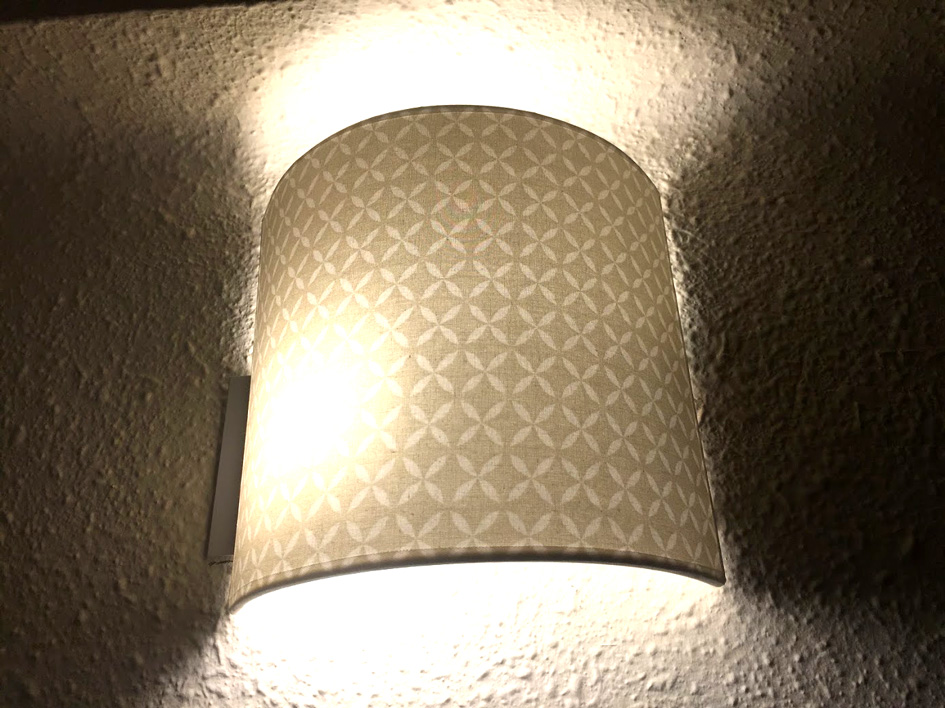 You see the slab of white showing? I hate it, but l notice it less and less.

I have spent quite a bit of time removing paint splatters from furniture and the floor. They should have paid more attention.

I hate the crookedness of two of the living room light fixtures. You can see it in the picture with the couch. He says it’s because the cups have too much cord in them  because of the height we wanted them hung. Poppycock! We’ll get it fixed one of these days, even it l have to glue it to the ceiling. 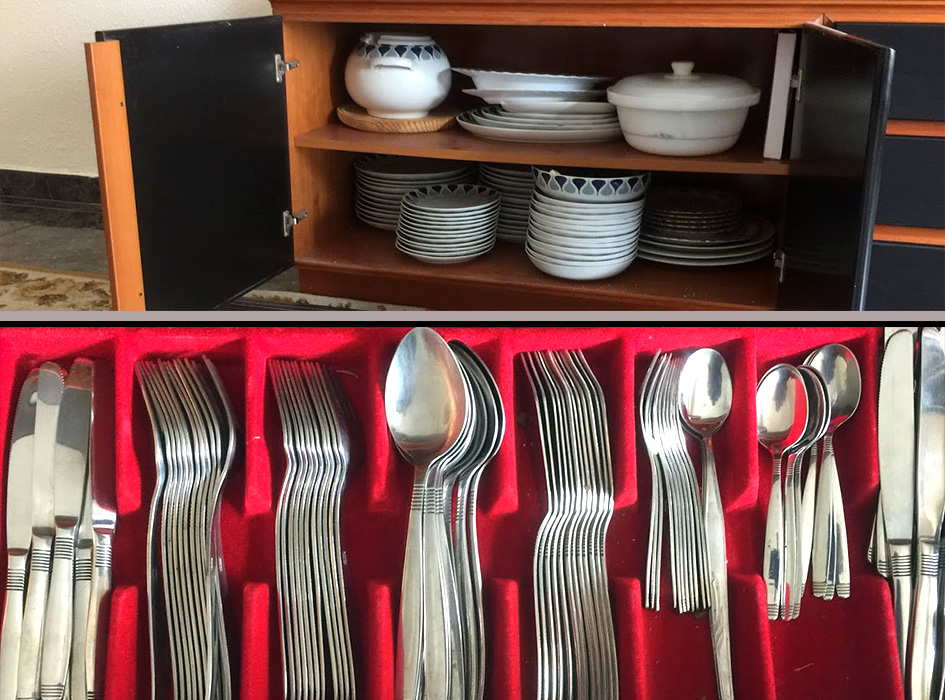 I so love the fact that we inherited these brand new set of dishes and cutlery set among other things. I removed the wrapping and we will use them on special occasions.

Feelings about our Valencia Flat Remodel:

Overall, I am very happy with the job the contractor did. It just wouldn’t be me if l didn’t kvetch just a bit. So far we are truly enjoying Valencia life and the apartment. The flat is just over 1200 square feet, but feels so much bigger. We have been walking everywhere. It is also a bit easier to find a parking spot in the neighborhood which is awesome!

Once we get settled, we are joining the closest city of Valencia gym ( I miss my old one so much, three minute walk as opposed to the 17 minutes now, but we plan on biking it which will bring it to just under six minutes, so not bad at all.

My favourite spot in the apartment is the recliner from which l can watch the lights when the sun goes down. I absolutely love not having another building directly in front. 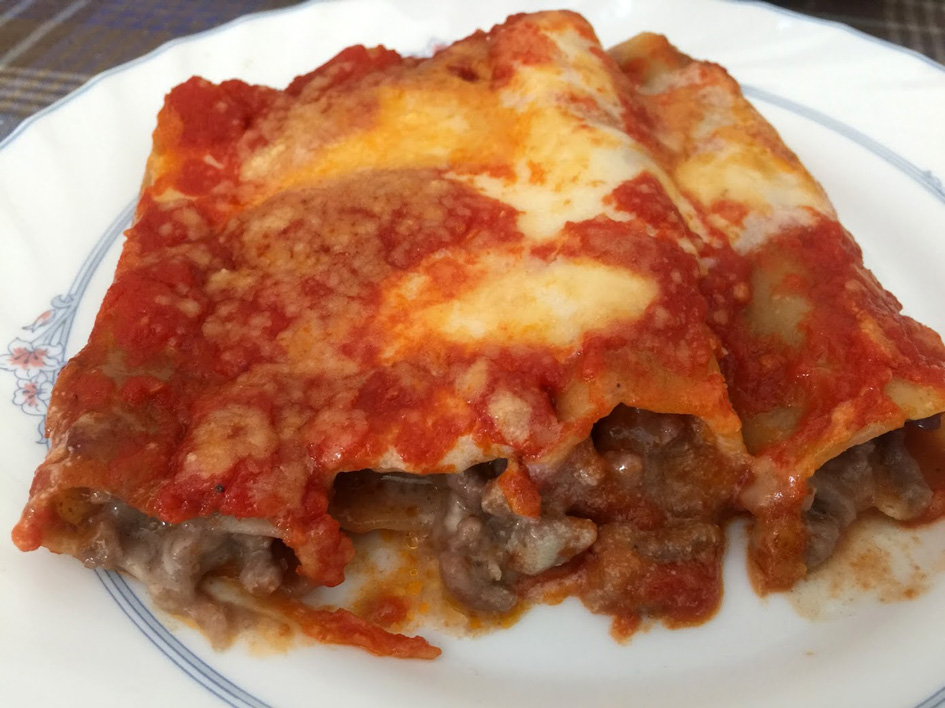 He made stuffed cannelloni for the first time. Fantastic! 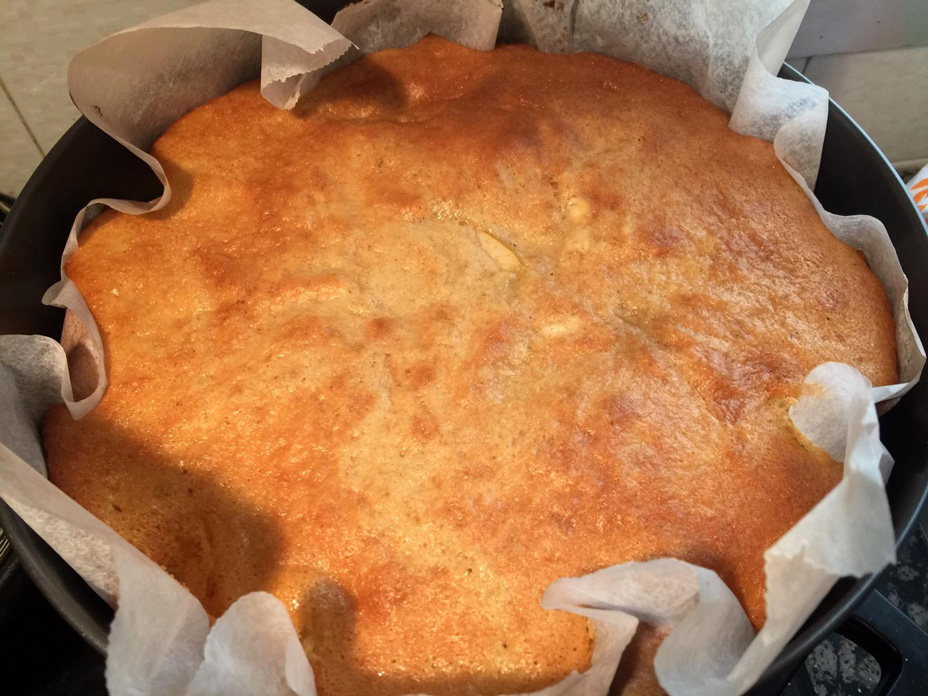 Apple cake. So fresh and delicious. Best part is l can control how much sugar to add since it’s something l need to watch.

The Valencia real estate market is slowly heating up. Just this past week, I have read at least two articles highlighting the city as a great destination and alternative to Barcelona and Madrid. I am kind of conflicted. On one hand, I am glad more people are discovering the city, on the other, I’m afraid it might turn into the next Barcelona. Whatever happens, I’m glad we bought now, while the prices are still decent.

Would we take on another home remodel in Spain? Yes we would. Without a doubt. It was relatively stress free and fun for the most part. Our good fortune was not living in the chaotic mess while they were renovating. I’ve been through that before.. three times, and don’t care to repeat any of those experiences. 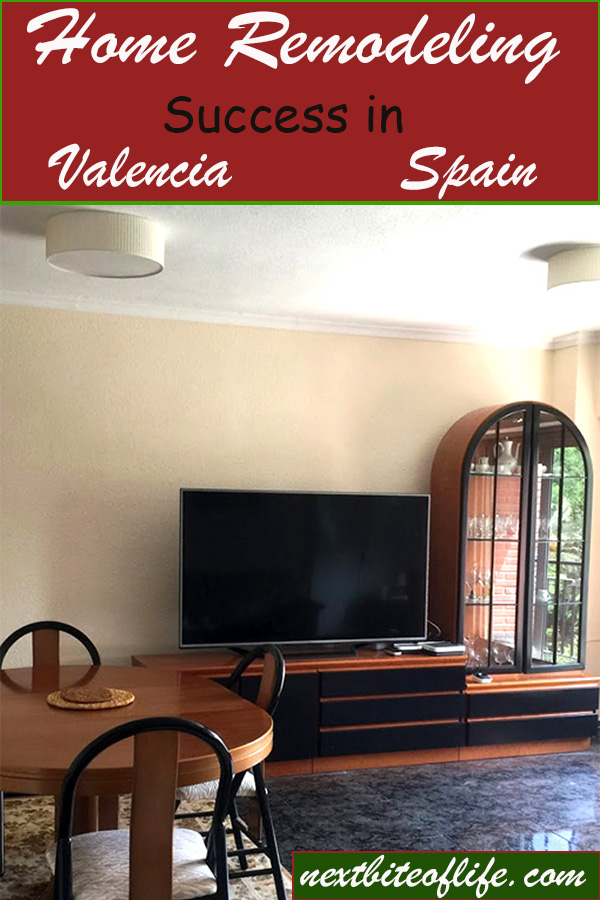 What do you think of our home remodel? Would you have kept the old furniture or thrown them all out and started fresh? We plan on being here for a long time as we believe we are in one of the best places to live in Spain.