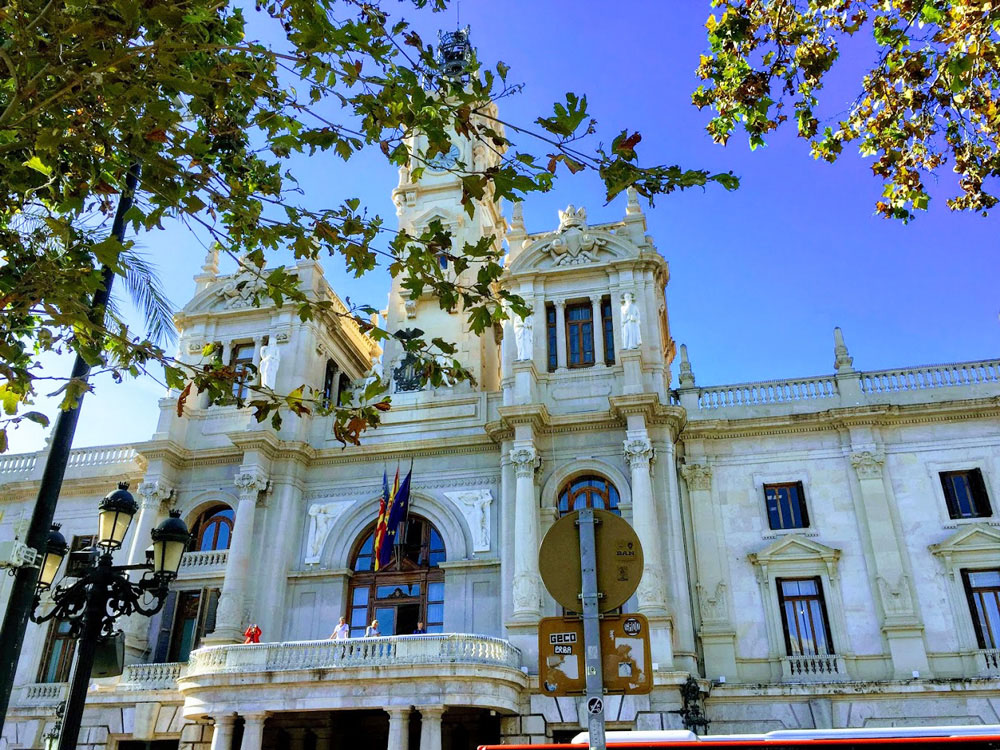 Nou de Octubre which translates to the 9th of October in the Valencian language is an important holiday in the Valencia region. In true Spanish fashion, the merriment begins a week prior to the big day.

Nou de Octubre also coincides with the feast of Saint Dionysius (Sant Dionis), more commonly known as “the Areopagite”, the patron saint of lovers. Think of this saint as our Saint Valentine. 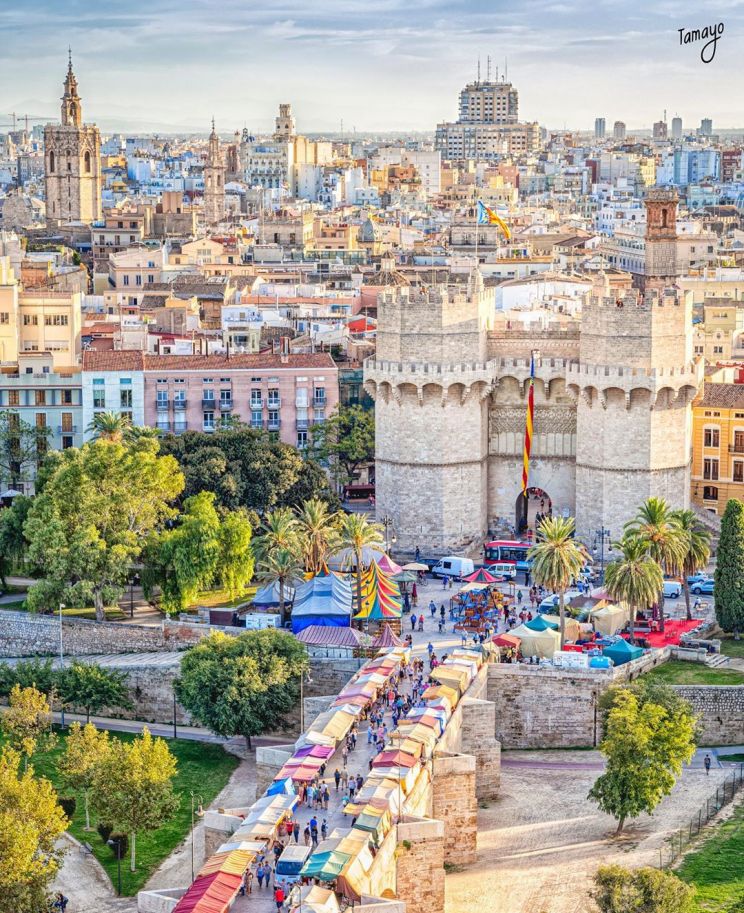 This is from Love Valencia FB page as it shows you what the fair looks like from the top.

What is Nou de Octubre?:

Nou de Octubre is a public holiday in the who Valencian region. It celebrates the day the King James I of Aragon captured the city of Valencia from the Moors in 1238, October 9th to be exact.

How is Nou de Octubre celebrated?: 9th of October events:

The Valencia Senyera flag makes its appearance on the balcony of the Ayutamiento (City Hall) at 11;45am. Rather than being carried out the door, it is lowered from the balcony and in a civic procession, carried to the “Parterre” which is flooded with flowers at the statue of King James. The Valencia anthem is sung proudly, and afterwards, the flag is taken to the History Museum for display. 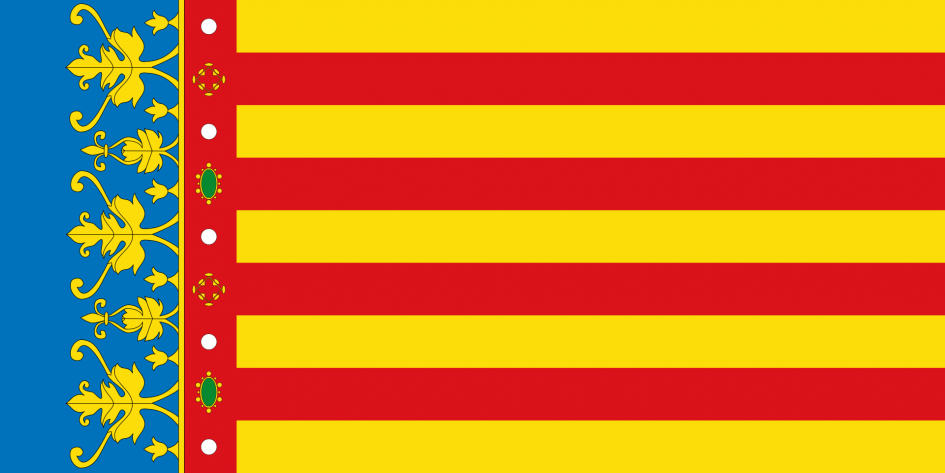 The flag of the Valencia region, also known as the Royal Senyera. Wikipedia image

At noon, there is the “masceleta” in front of the city hall. If you’re familiar with our Fallas, you know just how insane the pyrotechnic displays are. They love their fireworks! Loud, intense and very crowded. In fact, there have been fireworks daily leading up to today.
We are fortunate, or unfortunate to live close to a part of the Turia park where it takes place and have had the pleasure of seeing the displays without moving from our balcony. We are on the third floor and l can only imagine how truly awesome it must be to be to see it from the top floor. Our dogs however, are not loving it too much and like to stay close to us, but they have gotten much better over the years.
At 5pm, there is the parade of the Moors and Christians that moves through three neighbourhoods. We missed it last year due to bad weather, but today looks like a good day, so l think we will try and catch it. Here is what the parade looks like. This is from two years ago.

FIND THE PERFECT VALENCIA HOTEL FOR YOUR VACATION

The patron saint of lovers is not celebrated by giving roses like in the States. Wives and lovers are given Marzipan, a confection that is made from sugar or honey and almond milk and sold as sweets or bread.
These marzipan gifts are usually given wrapped in scarves, which explains why you see scarves hanging at the bakeries in the past week. This is so you can have it wrapped directly. This is known as La Mocaorà de Sant Donis. 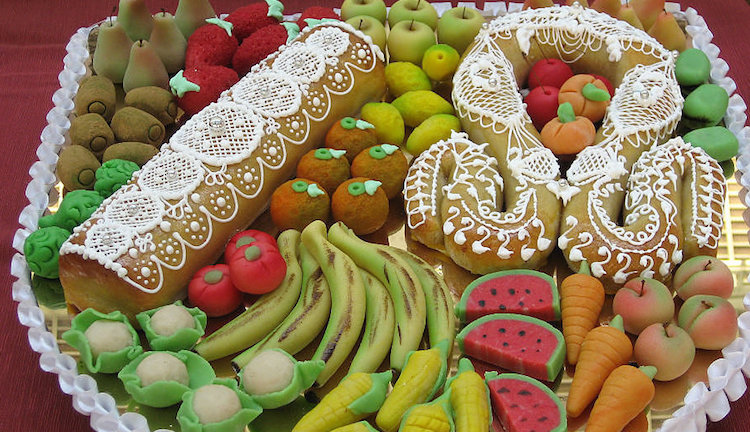 Fruit shaped marzipan given as gifts to lovers and wives. The fruits are fruits and veggies of the Valencia region. This is presented wrapped in handkerchiefs or scarves.

Many stands also give away free samples of marzipan products and the Valencia favourite drink horchata. You can imagine how popular those stands are.
The week leading up to today has been full of parades and lots and lots of fireworks at midnight, and sometimes during the day. I don’t mind the ones at night because our bedroom is on the other side and the noise still allows us to sleep.
There is so much going on in Valencia. It seems like there is something every other day. We are in the middle of the medieval market at the Towers de Serrano which runs for a few more days. 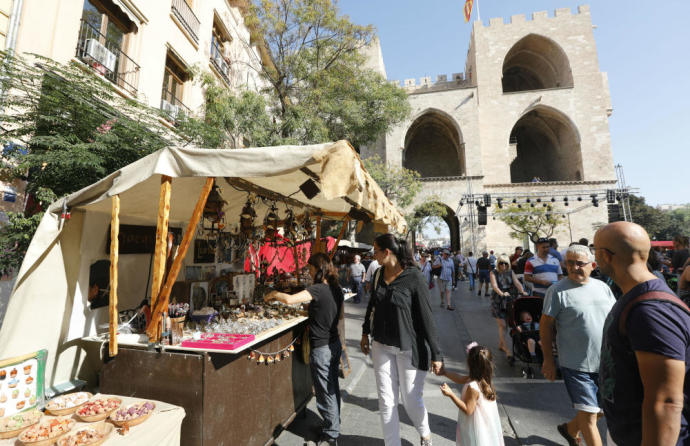 Hand crafted items are some of the things you can find at this yearly fair. A very family friendly one. Image source.

Of course nothing happens in Valencia without paella, and plenty of it. 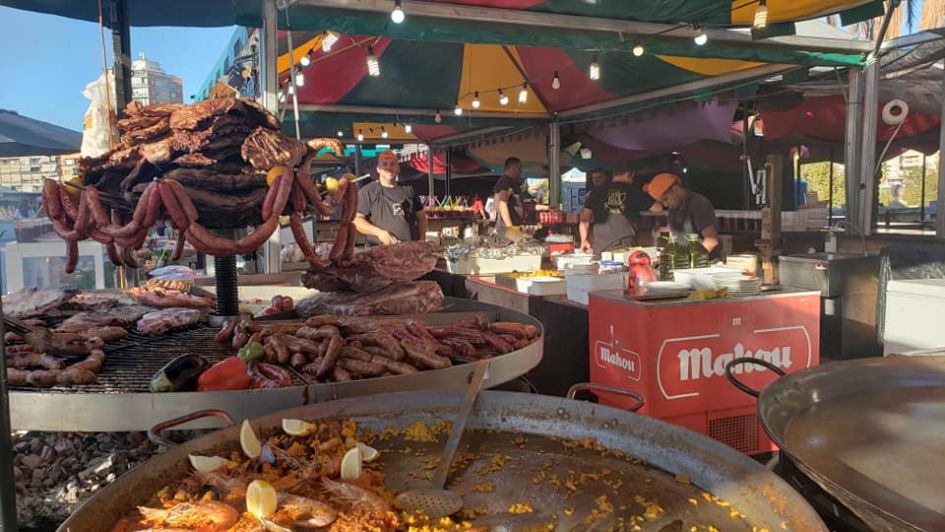 Paella, sausages, beer! What more could you want from life? :-). Photo courtesy of Ketty Delapana.

A lot of the government offices are also open to the general public free of charge for about a week before the 9th of October. They are actually cool to visit and we did last year but l am too lazy to look for pictures. It’s pretty cool because most of them used to be palaces so the furnishings and decor is pretty amazing.

You know we are absolutely loving life in Valencia. We have made really good friends and continue to enjoy the festivities that occur on a regular basis. If you’re ready for your expat life in Spain, make sure to get your copy of our guide on Amazon which walks you through the steps so you can start enjoying life in the sun sooner.

Here are some images from the parade: 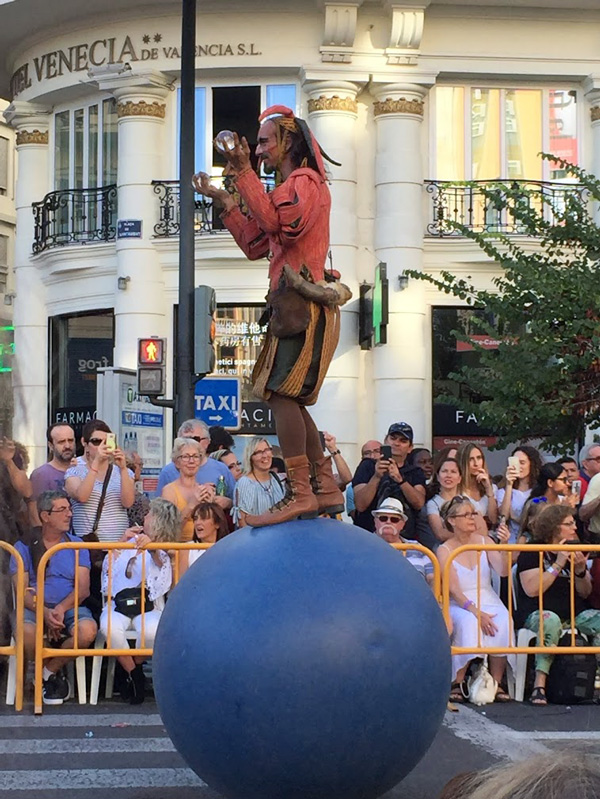 This guy is pretty talented and was a favourite. 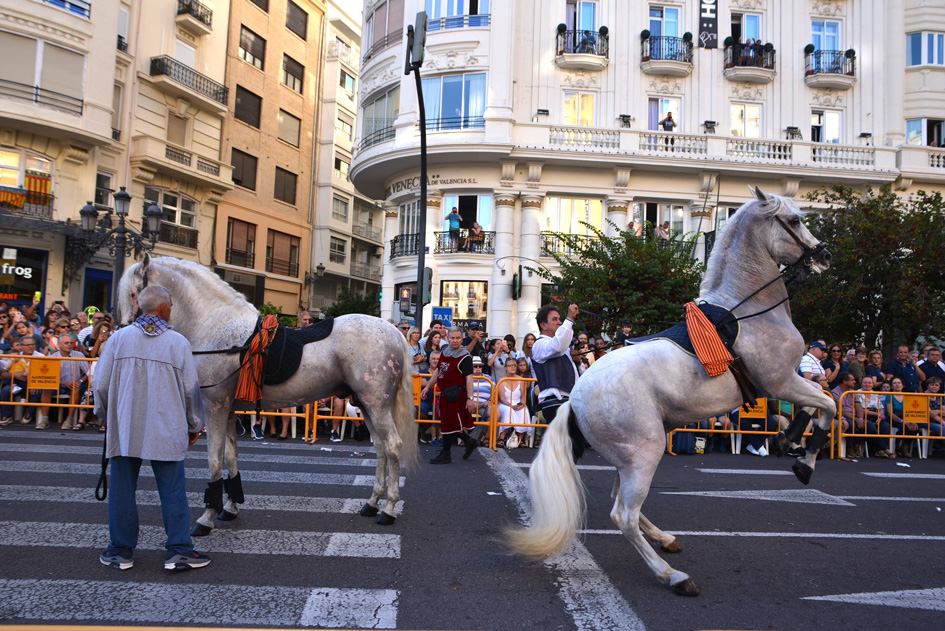 The horse on the right was pretty good with his moves. 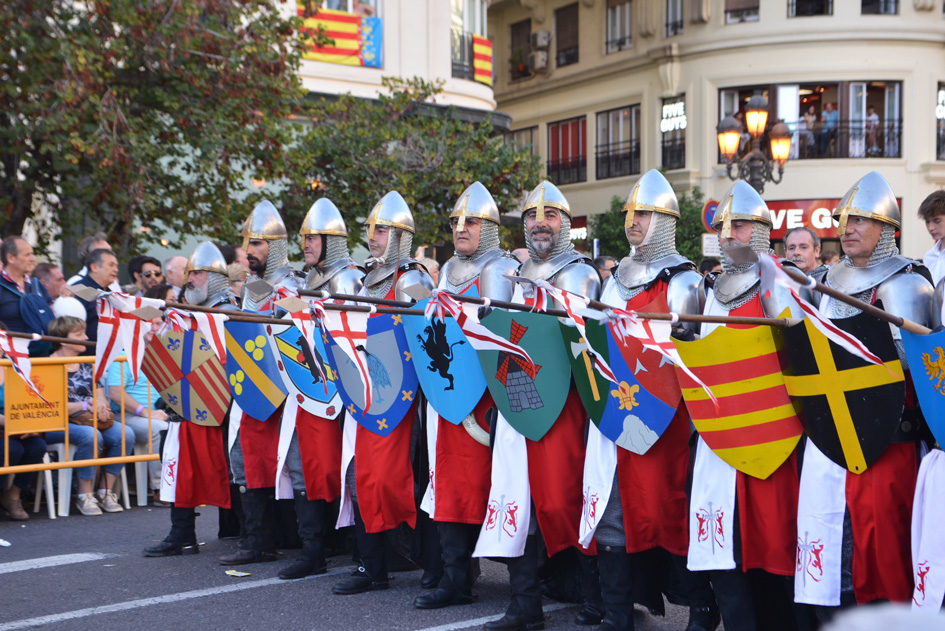 I can’t believe we were able to get these pictures because we were way in the back. 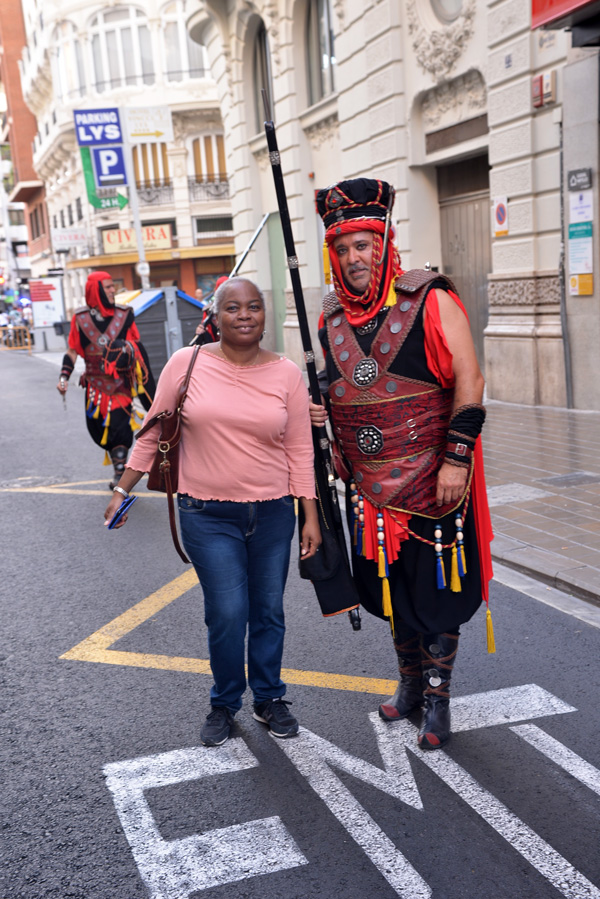 I was even able to grab a pic with one of the guys on their way. Good day out. 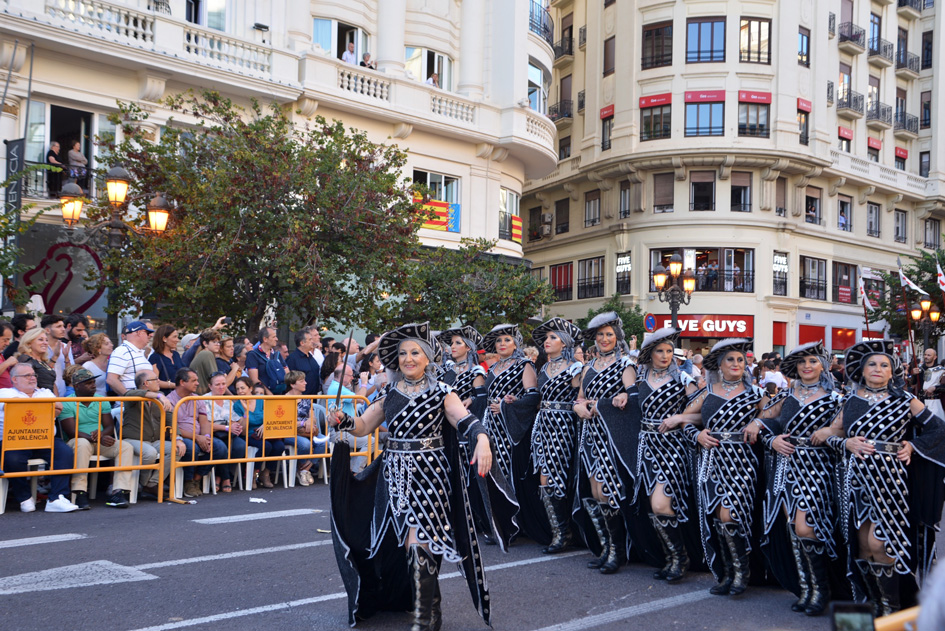 These women were so stylish in their Moors costumes. 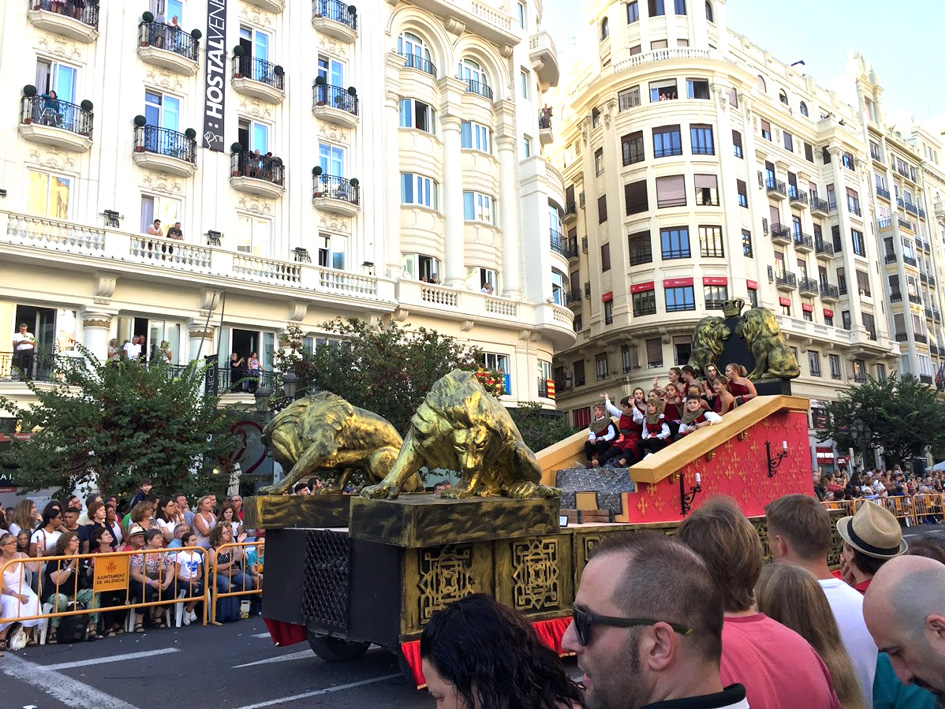 Even the kids were in on the parade. Everyone seemed to be having a good time.

Anything happening in your neck of the woods? Oh yeah.. Halloween is coming up isn’t it? How are you preparing for it?