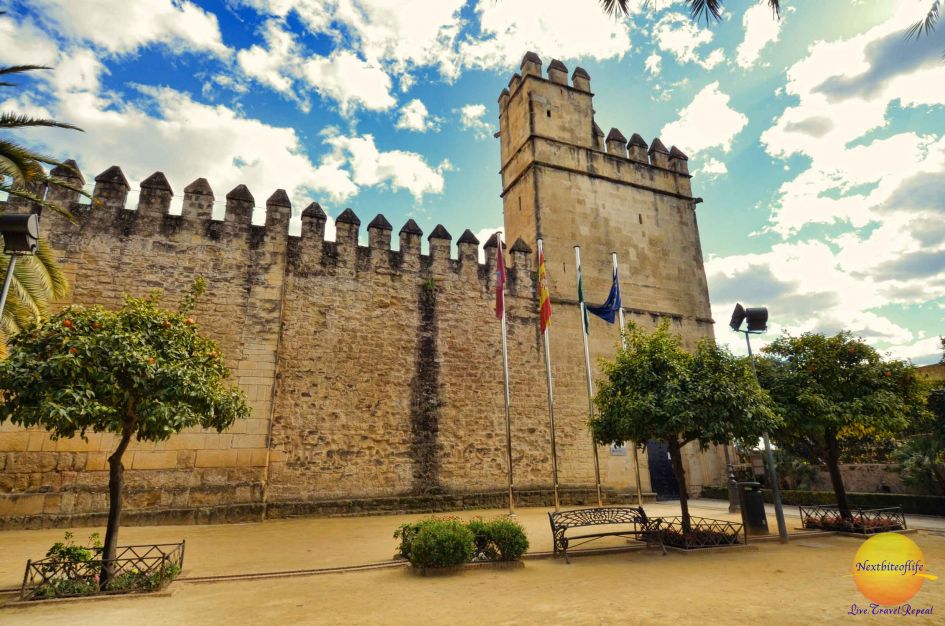 The Alcazar of Cordoba was a pleasant surprise. Truth be told, l didn’t even know they had one. I thought the one in Seville was it in the Andalusia region, excluding the Alhambra in Granada of course.

I found the Seville Alcazar so impressive, l didn’t think this one would measure up. Duh! I had forgotten what an important Roman city Cordoba had been. Rude awakening for me as we wandered the historic fortress that was the royal residence of past monarchs.

Alcazar of Cordoba is officially known as the Alcazar de los Reyes de Cristianos (Alcazar of the Christian Monarchs). This was one of the official residences of Queen Isabella and King Ferdinand.

I think l walked about 3 miles just inside the rooms that we were allowed in. It wasn’t because the place was huge, but because l was hoping that at least once, Isabella or Ferdinand might have stood in the very same space that l walked on! As far back as the 1400’s! Mind blowing isn’t it? 😉 .

In a previous post on the Mezquita of Cordoba, l had told you how the exiled Abd ar-Rahman had fled to Cordoba. He used the Alcazar as his palace. Once the Christians conquered Cordoba, they took over the fortress and turned it into the structure that it is today.

I had jokingly mentioned how, in my mind, the seats  in the cathedral reminded me of the interrogations, it was jarring to discover that the Alcazar of Cordoba, practically next door to La Mezquita,  was actually the site of the Spanish Inquisition. It was also where they planned the invasion of Granada 😉 .

Inquisition Tower at the Cordoba Alcazar:

Buy your  Travel Insurance  from the best!

The headquarters of the Inquisition was the Alcazar, and it was from here that Queen Isabella and King Ferdinand plotted the downfall of their enemies. A lot of the grounds were turned into torture chambers and prison cells.

Upon entry to the fortress, you  go left to visit the rooms with discovered relics. There is the Hall of Mosaics with amazingly well-preserved mosaics that l would still love to put in my home today. There is also a 3rd century Roman Sarcophagus in great shape.

Looking out from the balconies of this Cordoba castle, you see ruins of parts of the castle. Later on, l read that they used to be part of  the Arabic Baths, but they were later demolished and turned into more torture chambers during the Inquisition. What a waste! We did miss seeing the salvaged part of the baths below, thinking they were no longer in existence.

We climbed up to the tower. I only went halfway as the stairs were kind of steep and it was a tight space. I was enjoying the view, and Federico went up to the top. A few minutes later, he is yelling down to me and motioning for me to come up. I refused at first, but he wouldn’t give up, so l reluctantly climbed up.

I didn’t like the climb at all, the stairs were steeper, it was even narrower, there was no railing to hang on to, and lots of pigeon poop, but l maneuvered it sideways and boy..was it worth it. The view is stupendous from the top. If you make visit, and are able to climb up, do it. You won’t be sorry.

The most beautiful part of the fortress has to be the gardens. Immense space, with lots of fruit trees. Huge expansive ponds with loads of fish. Benches to seat and take in the scenery. It was my favorite part by far.

Looking back from the gardens towards the tower we went up,  it is quite easy to forget how much horror went on up above. How many people slaughtered and tortured while having to watch the beauty below?.

Afterwards, reading up on the history of the Alcazar of Cordoba, it hits me that the very same open space  we were looking down from, was where they used to hang the people, yeah..and those scratches and writings on the walls we were wondering about? The prisoners. Insane!

The whole point of the Inquisition to me, was to take the riches of the non-catholic people in Spain (Jewish, Protestants, Muslim) and kill them, or at the very least force them to leave. No hard evidence was really needed.

Spain was a pariah to the rest of Europe because of the cruelty they inflicted on people during the 300 years that the Inquisition went on. Of course, confession via torture counted as of free will.

The most famous form of  the 3 torture methods used was called the Toca. The other two you can find on the podcast. They would stuff cloth into the mouth of the accused, and force water down their throats invoking the sensation of drowning. Sound familiar? 😉 .

The Alcazar of Cordoba is definitely worthy of a visit. It is full of ancient history, like the rest of the city.

Alcazar Cordoba Spain is simply gorgeous and a must visit:

How much time to plan on for Alcazar visit:

We were there for three hours and we still didn’t see everything. We missed the remains of the Arabic Baths downstairs as well as the Royal Stables, a UNESCO site. This calls for a return visit of course 🙂 . We want to see them. I think we missed them because we arrived as the place opened. There was one man ahead of us, and the guy at the window was obviously not ready for us, so he just said.. gratis for you!

Handed us three the free ticket stubs and sent us on our way. There wasn’t any pamphlets laid out yet so we just wandered on our own. Be sure to pick one up so you don’t miss anything.

A visit to the Alcazar Cordoba makes for a great day trip from Seville by train if you don’t have time for an overnight visit. I think you should count on at least four hours or more to see everything in the interior as well as the stables, other buildings and gardens.

They have both summer and winter hours, so it is best to check the website. We got there at 9AM and they were just opening 🙂

Alcazar of Cordoba Admission is €4.50 for adults, under 14 is free.

How much time to spend in Cordoba?

Most people visit Cordoba on a day trip from Seville just to see the highlights, but not really visit the UNESCO sites such as the Mezquita. This is fine if you are short on time, but to really enjoy all of Cordoba.

I think three to four days would be a perfect amount of time in Cordoba. I would add another day if you happen to visit during the “Fiesta de los patios” which occurs in May yearly.

The festival is an annual happening in which the gorgeous courtyards with blooming flowers are open to the public so you can see how the locals live and the pride they take in their homes. Some of the patios are open year round as well so it’s good to check before your trip. You can check here for open patios. 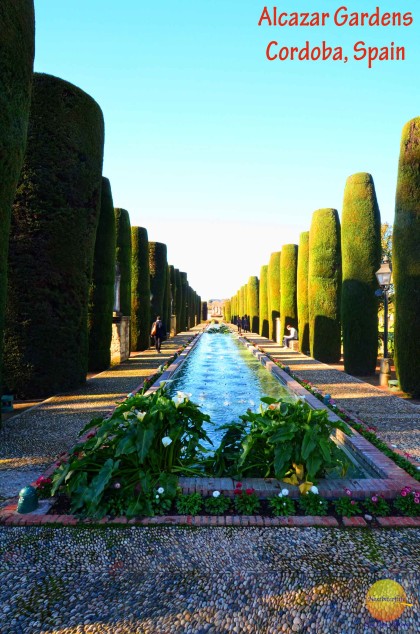 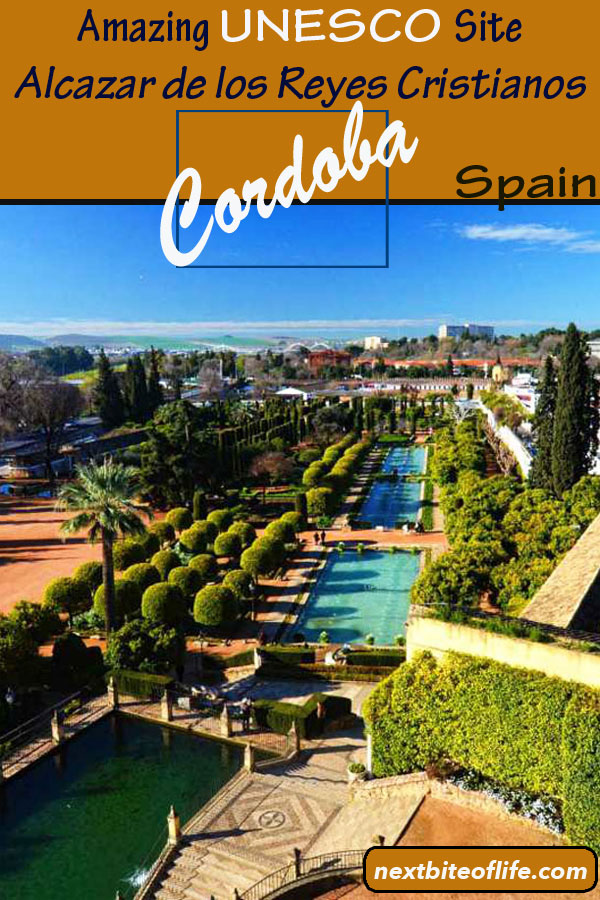 Have you overdosed on history, or do you find this as fascinating as we do? Alcazar de Cordoba was aces in our book. Living history, then fantastic tapas afterwards!. Winning!!! 😉 Have you been to Spain?

45 thoughts on “Historic Alcazar of Cordoba, Spain and Podcast”