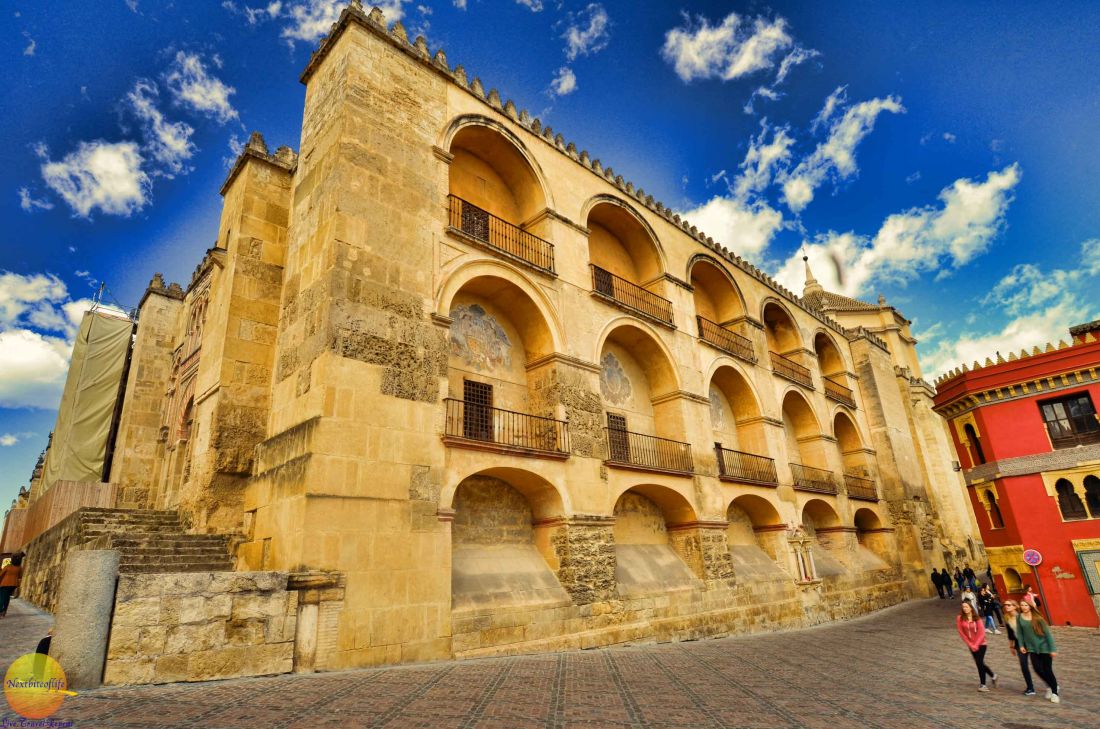 Exterior of La Mezquita Cordoba. Notice how thick those walls are.

La Mezquita, the grandiose Mosque-Cathedral is located in the Andalusia city of Cordoba. It was definitely a place we had to check out whilst we were visiting this charming city.

The Mezquita is considered the most important ancient mosque in the Muslim world. The architecture is a unique combination of Visigoth, Christian, Renaissance, Baroque and Gothic styles. Now, you know why we had to witness it for ourselves 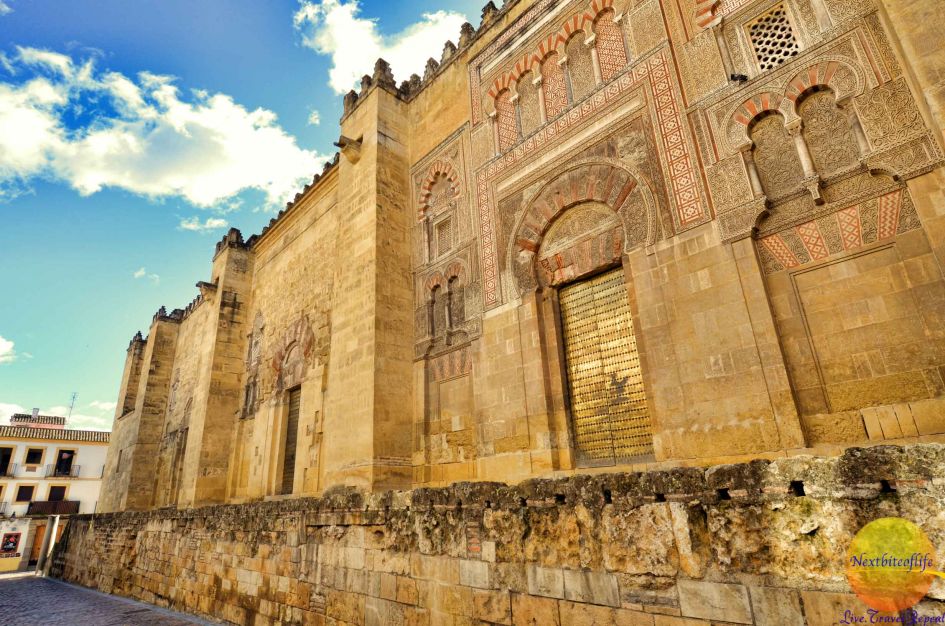 La Mezquita de Cordoba. You come out..and boom..little stores and tiny streets with patios filled with flowers. Bad for my allergies, but nice to experience. 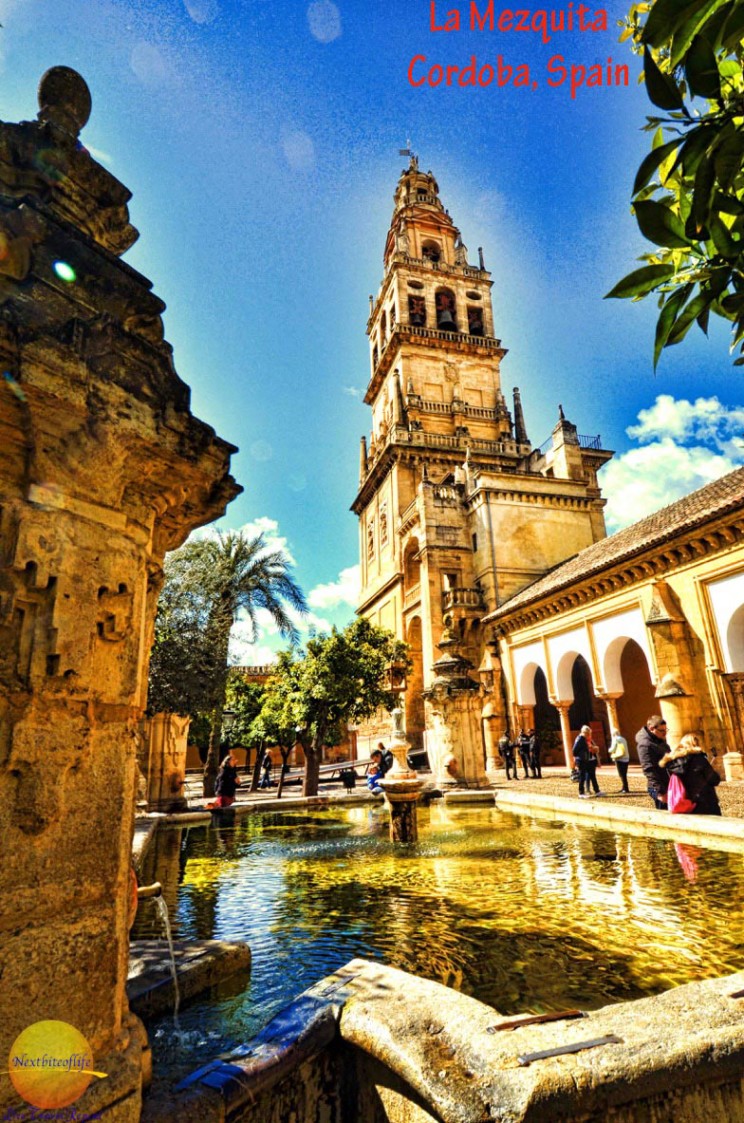 Entradas de Mezquita Cordoba: The courtyard of the Mezquita. There is the minaret facing North.

As you enter into the grounds of the imposing, whole block occupying Mezquita, the first thing that strikes you apart from the Mudejar designs that adorn the entrance doors, are the size of the doors themselves.

Each stands at about 20 feet plus by my estimation and look to be solid brass. These doors open up to an impressive courtyard. The main focus is the fountain, as well as the beautiful minaret ( a second reincarnation).

The original minaret was destroyed and rebuilt under the reign of Abd al Rahman III who wanted it pointing towards the north) that towers over one corner of the yard. We are now so used to the Mudejar style of architecture that we were not suitably impressed by the courtyard itself, unlike some other visitors :-) .

Having seen some of the wonderful examples we have here in Seville, you can understand why. The courtyard was used for teaching and carriage of justice under the Muslim rule. There are orange trees planted in the courtyard and close to the fountain was their water supply. The sculpture of Saint Rafael sits at the top of the minaret, which was used as a call to prayer. 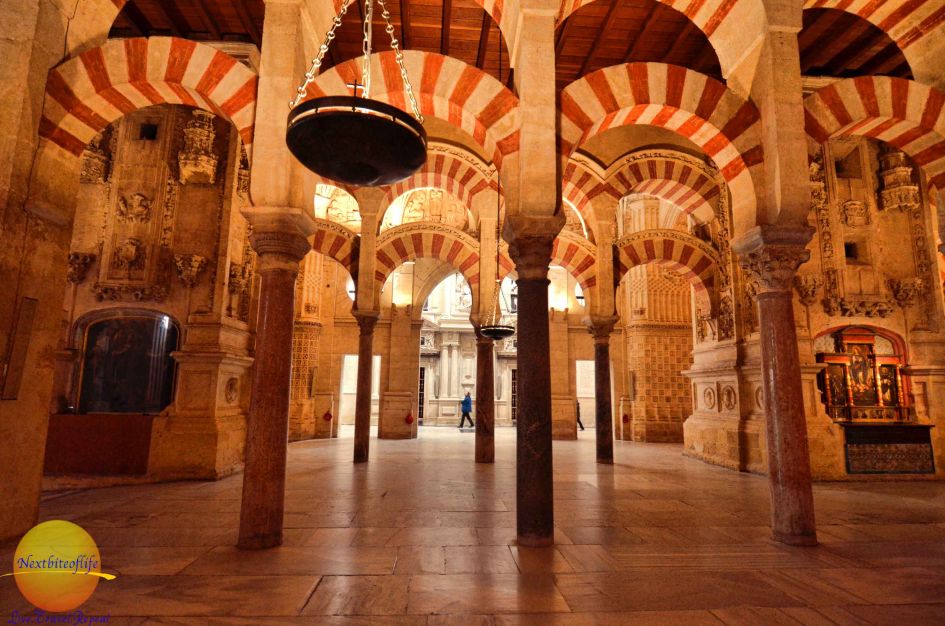 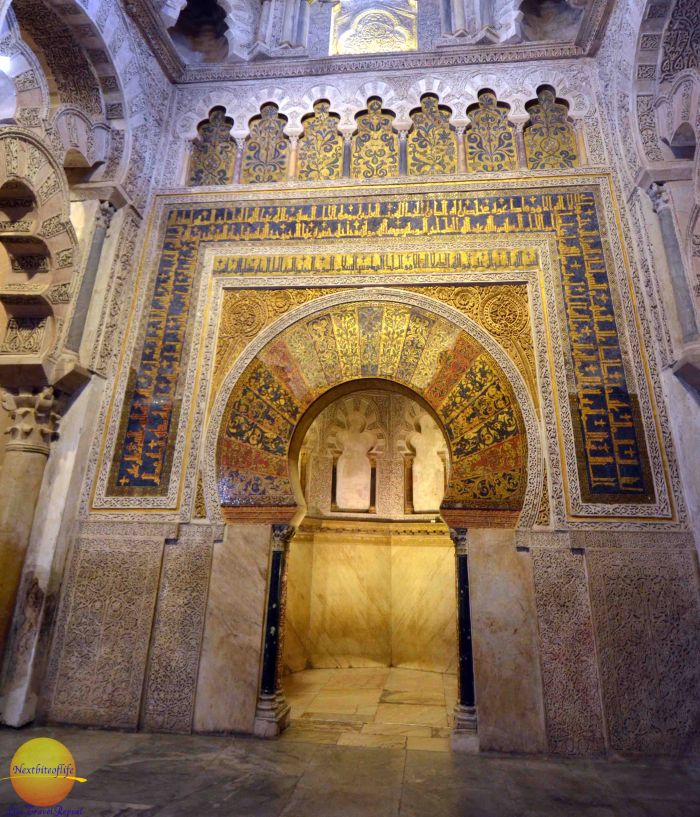 Great mosque of Cordoba history: The Mihrab which points towards Mecca, required of all worship places. 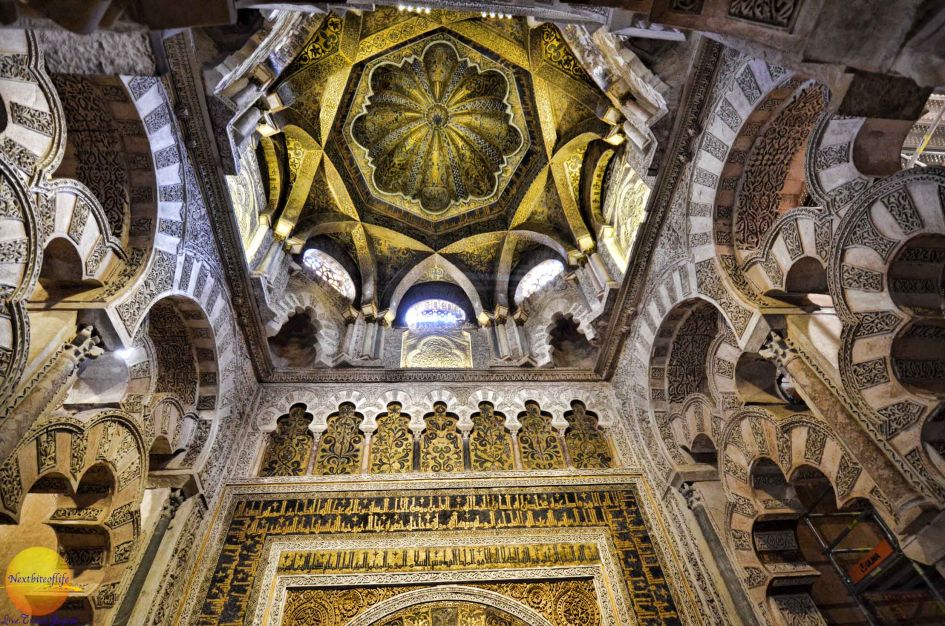 Avoid our $$ losing journey and get travel insurance to cover the unpredictable!

Protect your trip with Travel Insurance 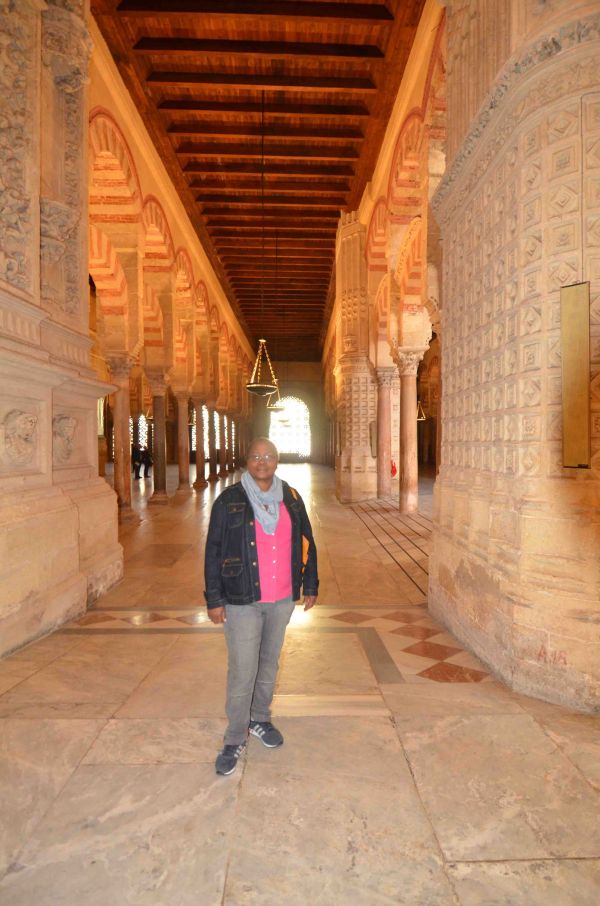 Mezquita Cordoba interior – it is without a doubt one of the most beautiful interiors I have ever seen.

The geometric design of the Mezquita is amazing, and how thick are those pillars! You can just imagine all the man hours that went into building such an awesome monument.

Also known as the mosque of Abderraman I. It was he who built the first mosque in 785! Imagine that for a second age wise. Insane right? It consisted of 11 naves and 11o columns of different heights due to the way the hall was built.

He is responsible for the horseshoe shaped arches that is synonymous with this monument. It was actually an original design by the Visigoths, but went on to become the signature style of the Muslims once introduced to them.

The candy cane stripes (alternating brick and stone) has been maintained throughout history. As the Muslim population grew, the mosque was extended over the years. I think this is my favorite part of the whole structure.

I sort of felt like l was in Willie Wonka’s chocolate factory. It was mind blowing to me that thousands of years ago, men were capable of designing and executing such an intricate building. A building that has survived for hundreds of years and will definitely survive more. I can only imagine how much manpower went into building. 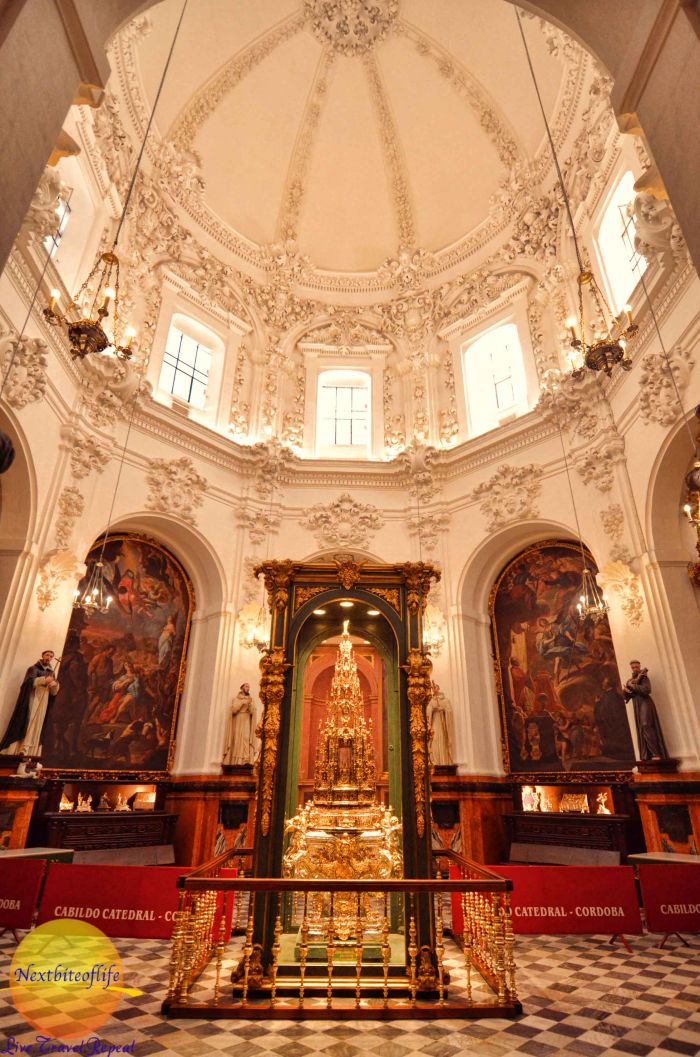 White marble at the Mezquita Cathedral, cold and cool and the same time. 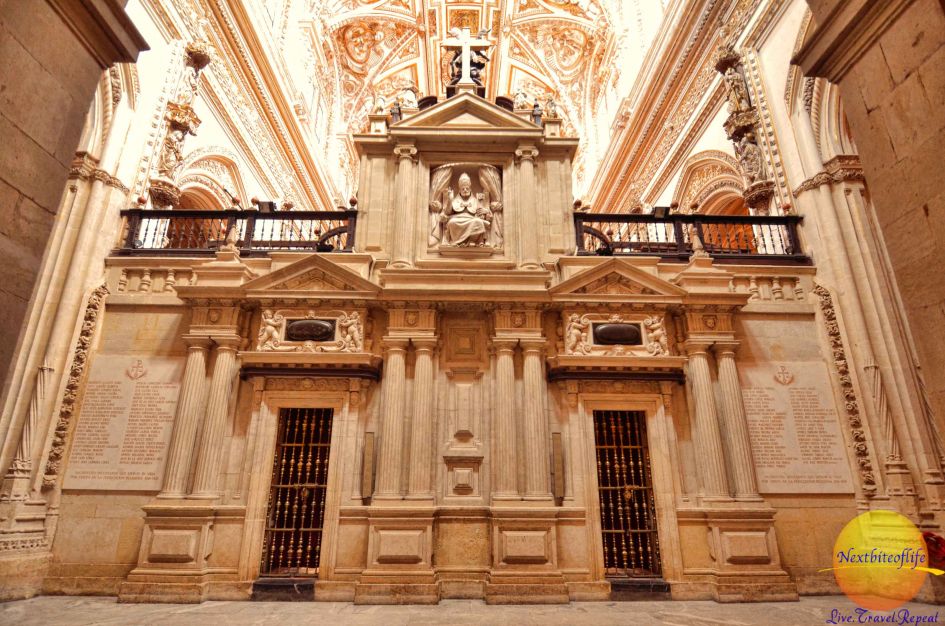 The placement of this is actually quite awesome. You are so busy oohing and aahing because more than likely you are following the edges, walking in a square if that makes sense.

You then look towards the middle and notice this amazing structure. Construction of the cathedral started in 1523 after then Bishop Manrique got permission from the King, Carlos V to build the church inside of the former mosque.

The heart of the mosque was torn down and replaced with this all marble and gold domed cathedral in the image above. Work was finished in the 17th century. Mahogany and marble pulpits were added in the 18th century.

I loved the lights thrown by the stained glass windows that are abundant in the cathedral. Even though this reminds me of the Seville Cathedral, l have to say, l prefer the Mezquita Mosque. 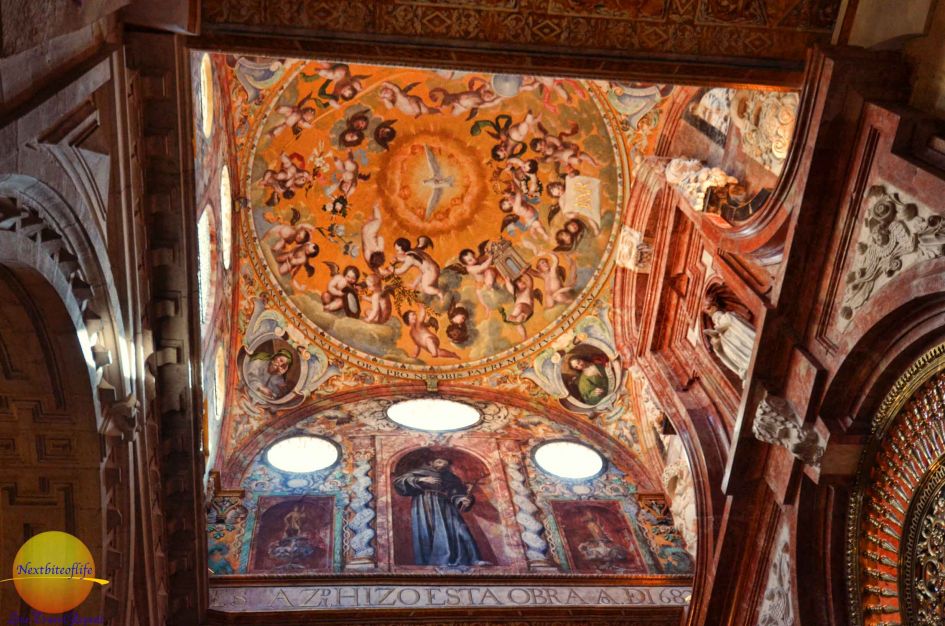 Inside the Mezquita de Cordoba: Part of the Catedral Cordoba section with the frescoes – Beauty everywhere..Up and Down! 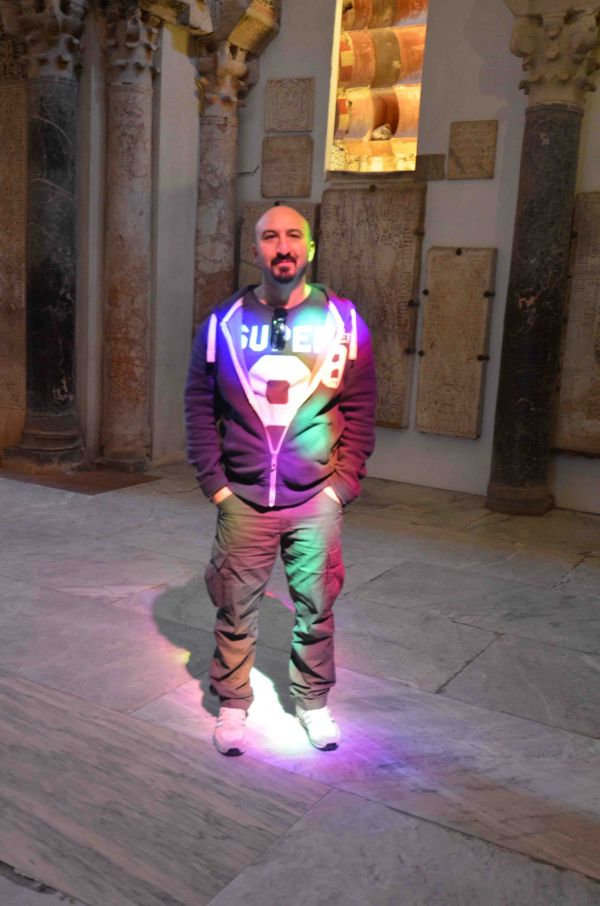 It was fun posing in the light of the awesome stained glass windows inside the Mezquita :-)

The Mezquita covers over 24,000 square meters. It should be noted that the original mosque was constructed on the site of an ancient church that was dedicated to Saint Vincent, so l guess it goes to show that what goes around comes around :-) . One thing that l kept wondering about during our visit was how the Muslim visitors felt when they saw the building.

There were a few Muslim tourists (women in the traditional jihab ) that we encountered. I kept thinking that if l were them, my thoughts would be “its about time that it became a mosque again”.

I swear sometimes l think that has something to do with all the unrest and tension between the Muslims and Christians. They want their turn again. I’m no historian or what not..just trying to make some sense of what is happening. Please enlighten me as to your thoughts :-) .

There were some really cool old artifacts on display inside the Mezquita too. Federico had studied some Latin in school and had fun schooling me on some of the finds. I love living history lessons. 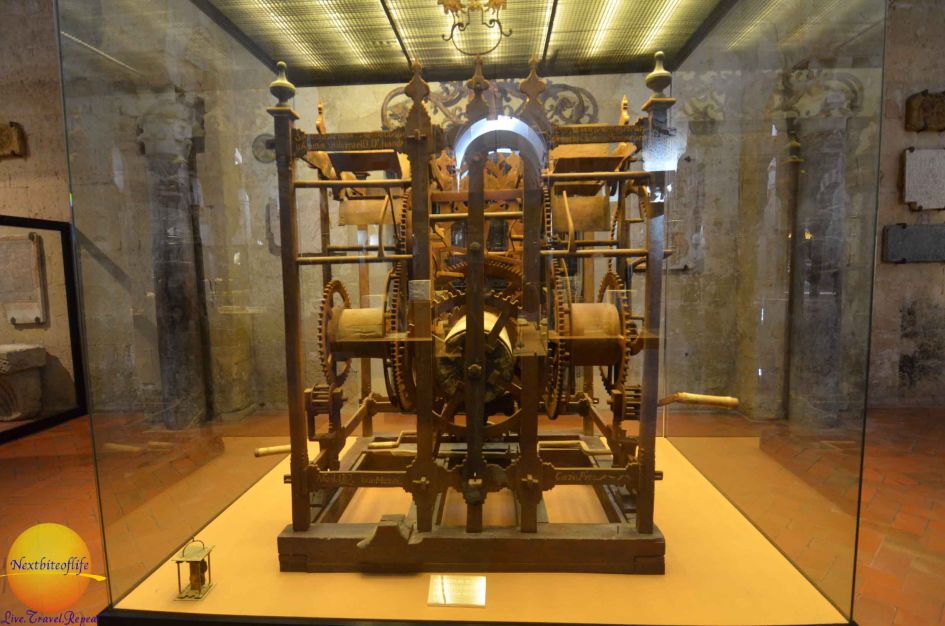 This contraption used to be the clock for the Mezquita. I forget how old it is :-) 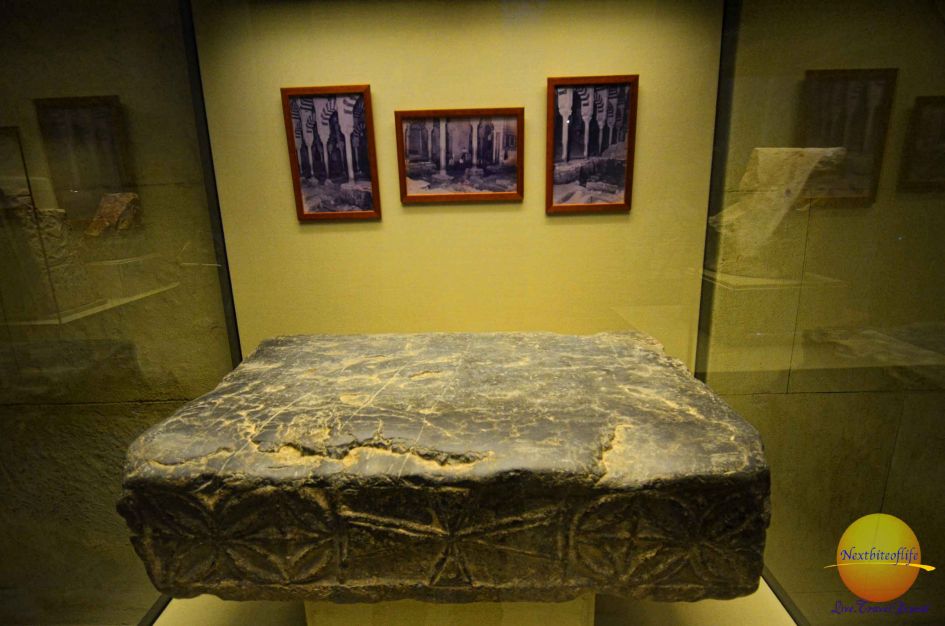 An old, old stone piece from the original columns of La Mesquita. Check out the pictures in the back, it was the base. Still in good shape. 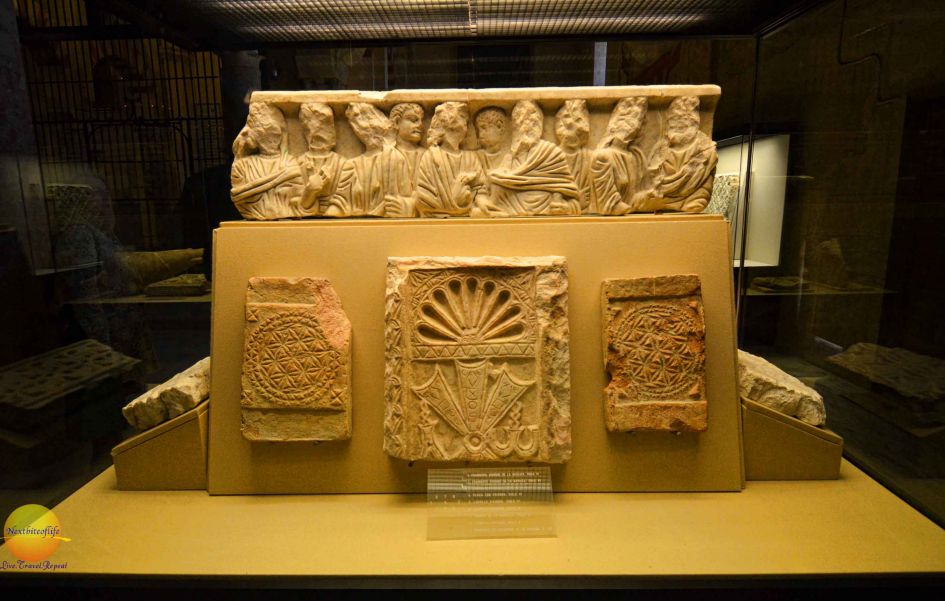 I love this one. Jesus and his apostles. Centuries old, and even though chipped, still looks good, just part of the original artifacts saved from La Mezquita Cordoba. 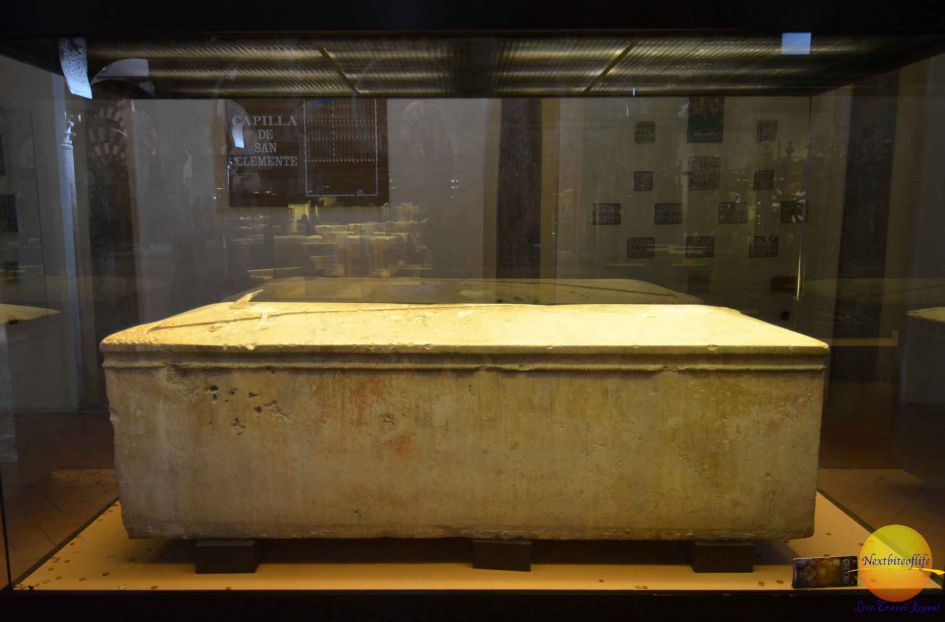 Crypt of San Clemente inside La Mezquita. We figured he wasn’t that tall, and probably got buried with possessions. Maybe servants too? Amazed that people found ways to throw coins in there. 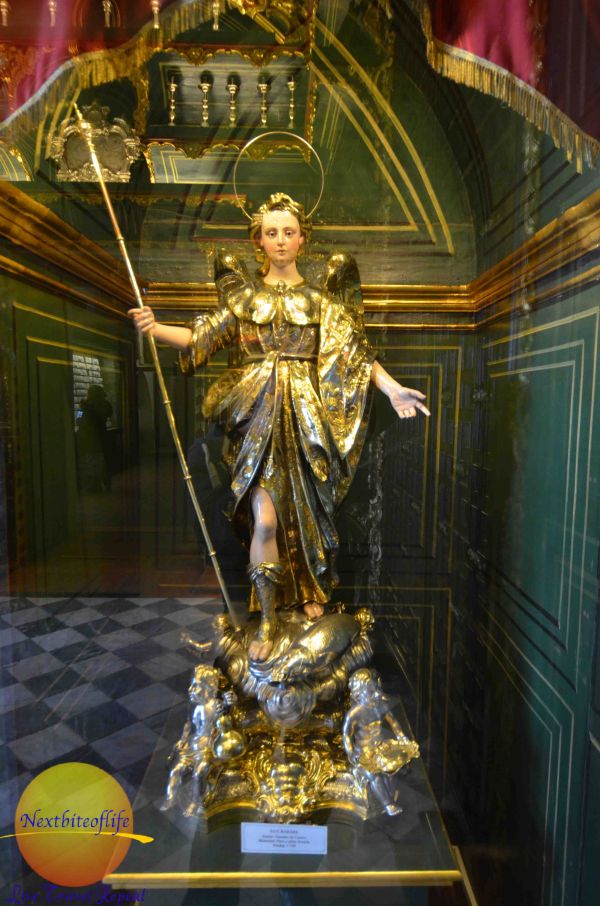 The solid gold and silver pieces displayed inside La Mezquita Cordoba were behind glass for obvious reasons.. 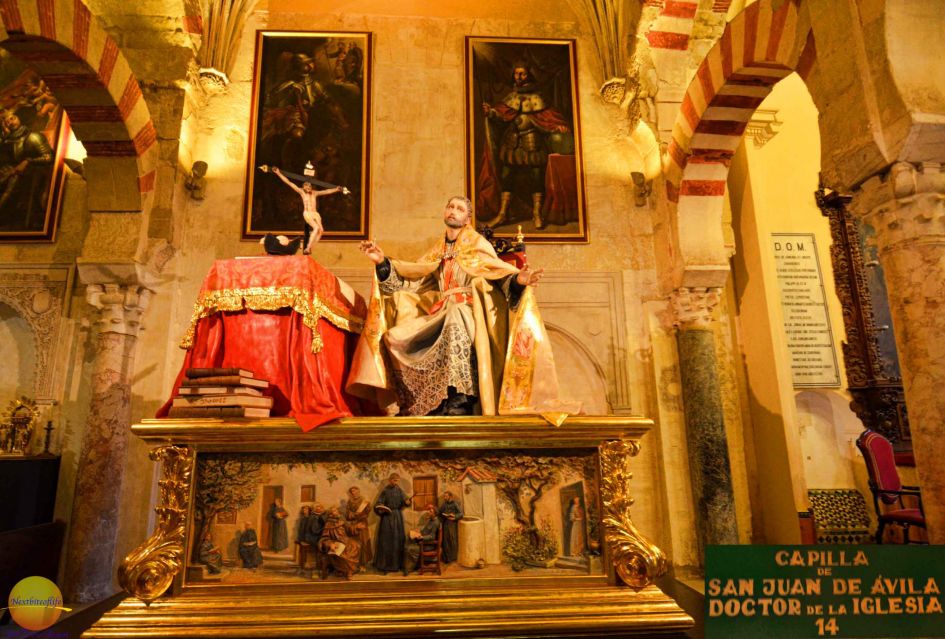 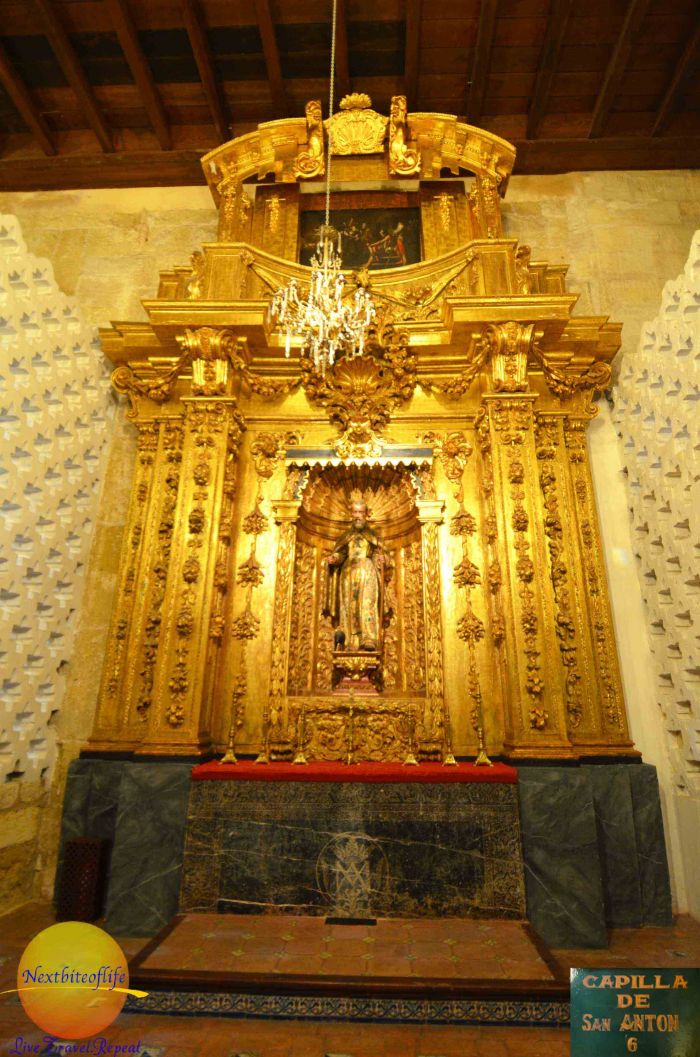 This is just one of the many gold gilded altars that we saw in the interior of the Mezquita de Cordoba. Such a wonderful mixture of faiths.

La Mezquita altar. The blending of the Muslim and Christian forms is so unobtrusive and quite pleasing to the eye. 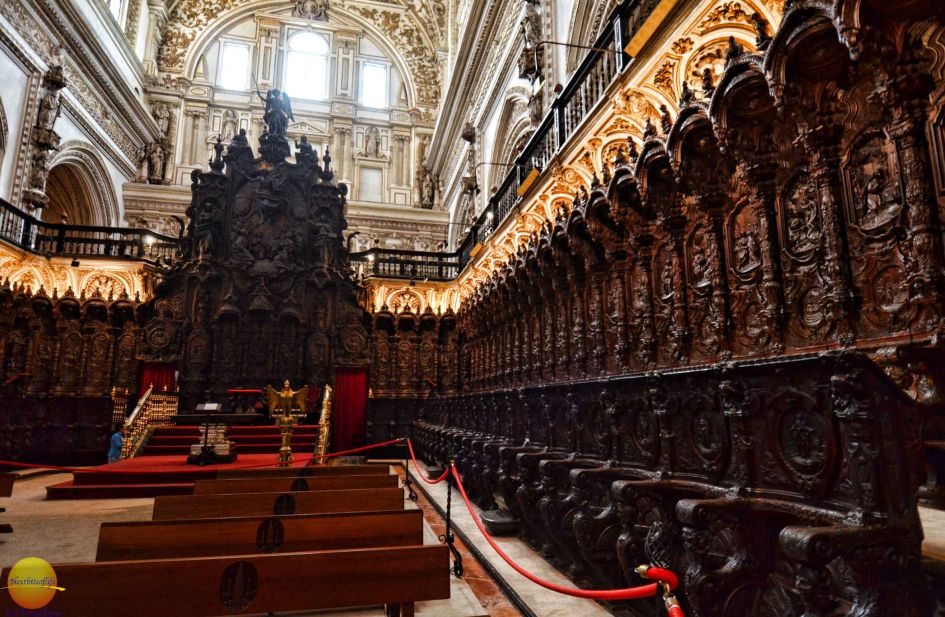 Mezquita Catedral section: The Inquisition…what a show! ;-) . Mel Books anyone???

If you’re hungry after your tour of La Mezquita, I highly recommend La Tranquera for the most awesome Argentinian food.

Is visiting La Mezquita worth visiting?

Hell Yeah!!! :-) . It is big. It is beautiful. It is historic. Heck, how many times would you come back to Cordoba assuming you were a tourist? I bet the answer would be just zero. I suggest you ignore all those people that say “Oh, it’s just too touristy a thing to do. I am quite okay with just seeing it from the outside”.

A UNESCO site that is truly worthy. Living history. If you’re short on time, Cordoba makes for an excellent day trip from Seville, combine with a Cordoba Alcazar tour for a full day even though l would suggest a couple of days in Cordoba to fully appreciate it. 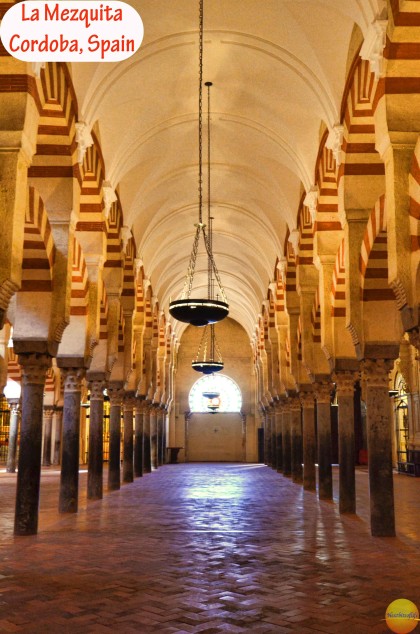 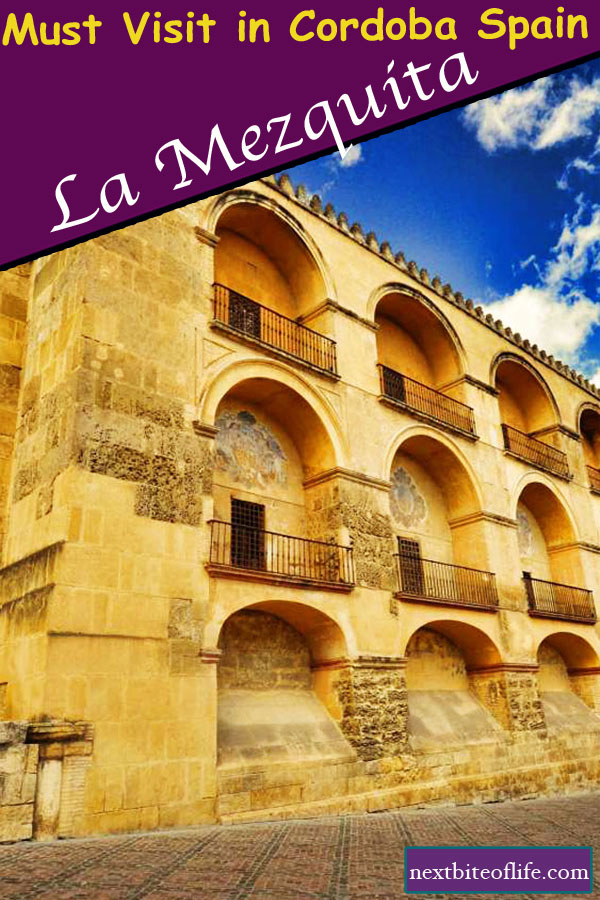 Have l convinced you to visit Cordoba, and more specifically the great mosque La Mezquita? Are you a history or architecture buff and consider this beautiful? If not, what is your architectural style favorite? If you’ve been, how did you like it, and would you recommend this UNESCO world heritage site?