Greeking.me Is The Best Foodie Tour in Athens (Greece) 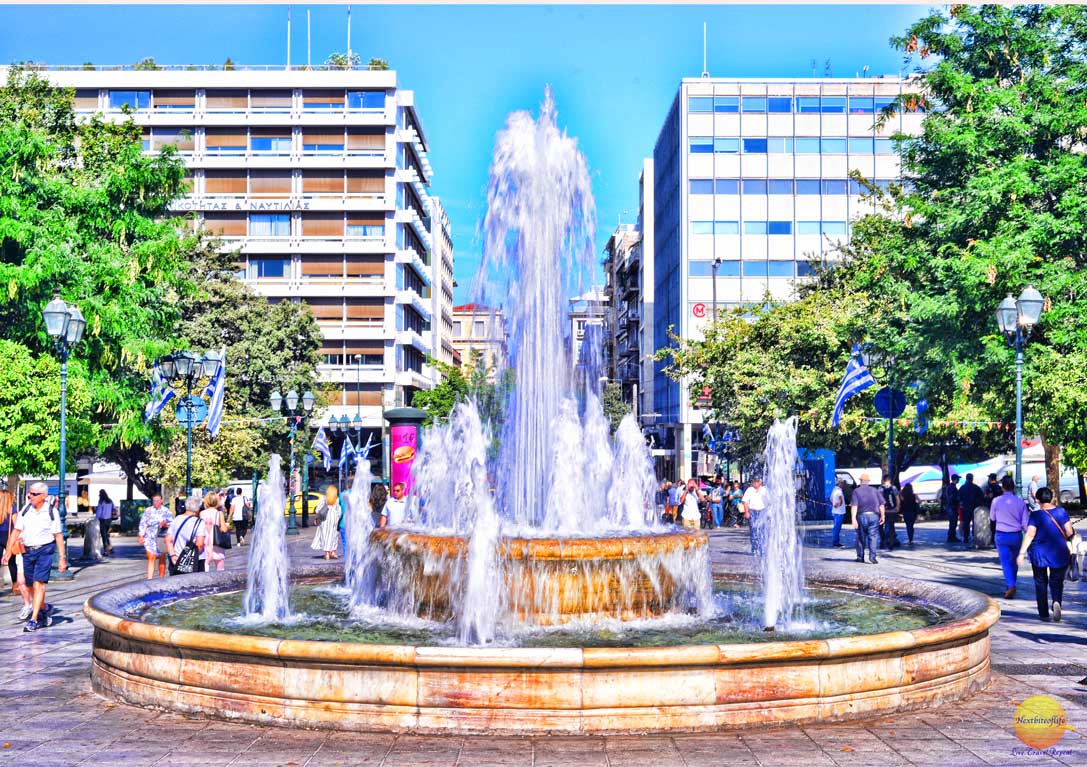 Foodies like us will absolutely love Athens. Greece not only has incredible history, it also has amazing food. Our love for the city of Athens was further enhanced by our epic Athens food tour with Greeking.me and its knowledgeable guide Elena who walked us through the lively streets of Athens as we sampled mouth-watering sweet and savory offerings over a 4 hour period.

We had been warned to “come hungry” and we certainly did. We highly recommend this tour for anyone who wants to experience authentic Greek food in Athens. As such, we think you should include this as part of your Athens itinerary. Here is a recap of the highlight of our Athens visit. 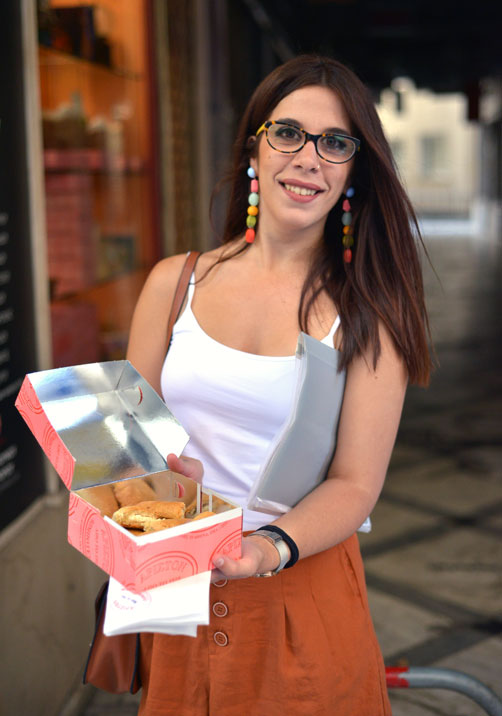 Elena, our guide for the Athens food tour with one of the typical Greek food delights

Our Greeking.me foodie tour , courtesy of the company, started at the main central square of Athens, named Syntagma Square. Elena, our guide, was already there along with an Australian couple. We were joined by yet another Australian couple (what are the chances?) just a few minutes later. Greeking.me foodie tour is a small group foodie Athens tour. This makes it so much more intimate and gives you a chance to get to know the rest of the participants. We were fortunate that the two couples were very friendly and easy to talk to. The time flew by and l am positive that we all enjoyed the experience. 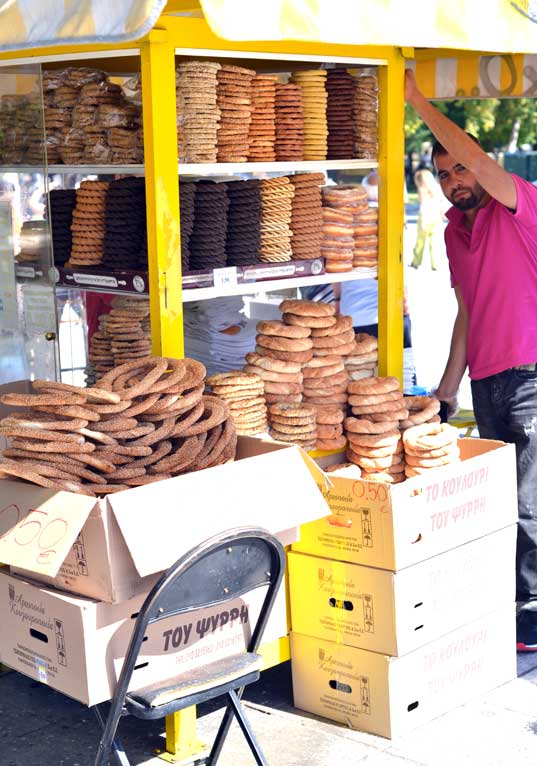 The Koulouria is the sesame covered stuff on the bottom left being sold by this Greek street food vendor. We also had the giant donuts (middle right section) during our week there :-)

Elena gave us a brief history of Greece.  It was then time to try our very first typical, local savory snack of Athens which was being sold by street vendors right in the square. Called Koulouria, it is best described as pretzel like dry bread ring (it is both salty and just a tad sweet to me, thanks to the molasses maybe). Koulouria is typical breakfast food for Greeks, along with a cup of their very strong (in my opinion) coffee. We discovered that all Koulouria are made in the same factory for sale in the city, so no matter which street vendor you buy from, there is no difference whatsoever. I quite liked it.

Some of the other typical Greek food that we sampled over the four hour foodie tour in Athens included: 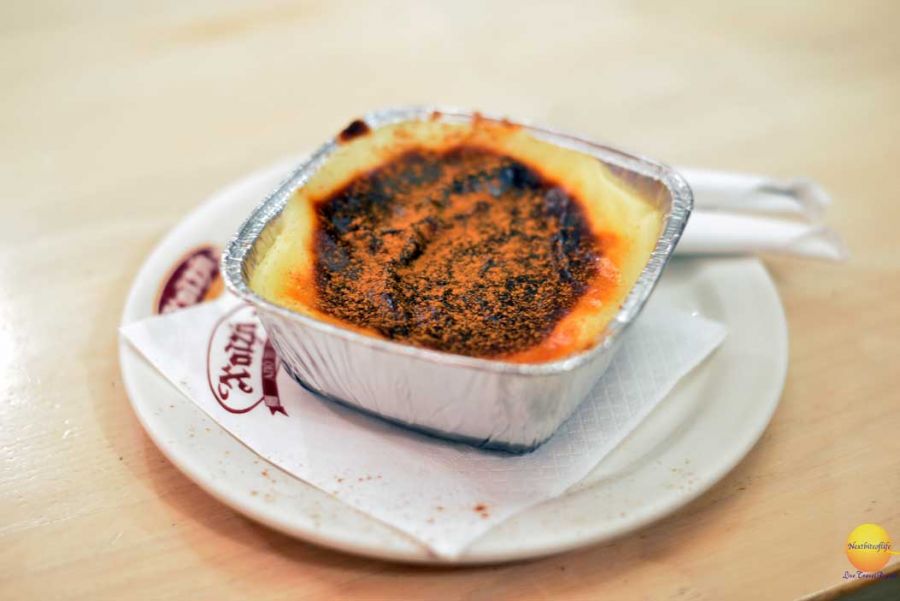 Insanely good rice pudding with caramelized topping. Too sweet for me.

Deliciously sweet and a hit with everyone. I liked it, but did not love it as l am not a big pudding fan. Federico was more than happy to eat my share. He said it tasted awesome, combination of flan, rice pudding and vanilla. 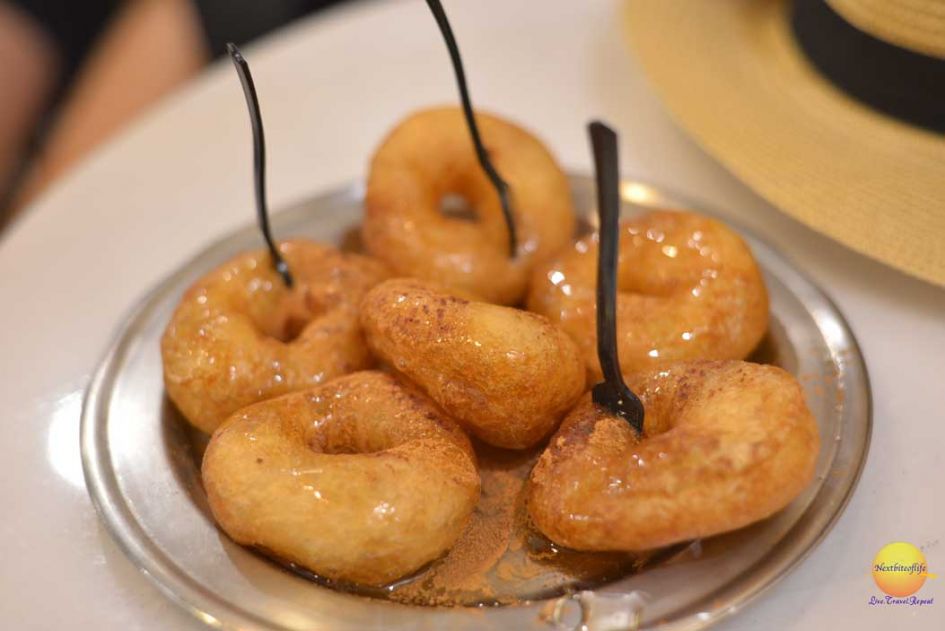 Imagine that this is normally one portion! Sugar overload so we were more than happy to share.

What can l say? This was my favorite sweet food. Deep fried doughnuts  drizzled in honey. What’s not to love? Elena connects the dots between history and food. For example, this delightful dessert originated from the Ottoman empire. The word is derived from the Turkish word for “morsel” or “mouthful” and indeed it was. It was interesting to hear that this was the prize money at the Olympics games as far back as 776 BC. It does kind of remind you of the Olympic rings does it not? 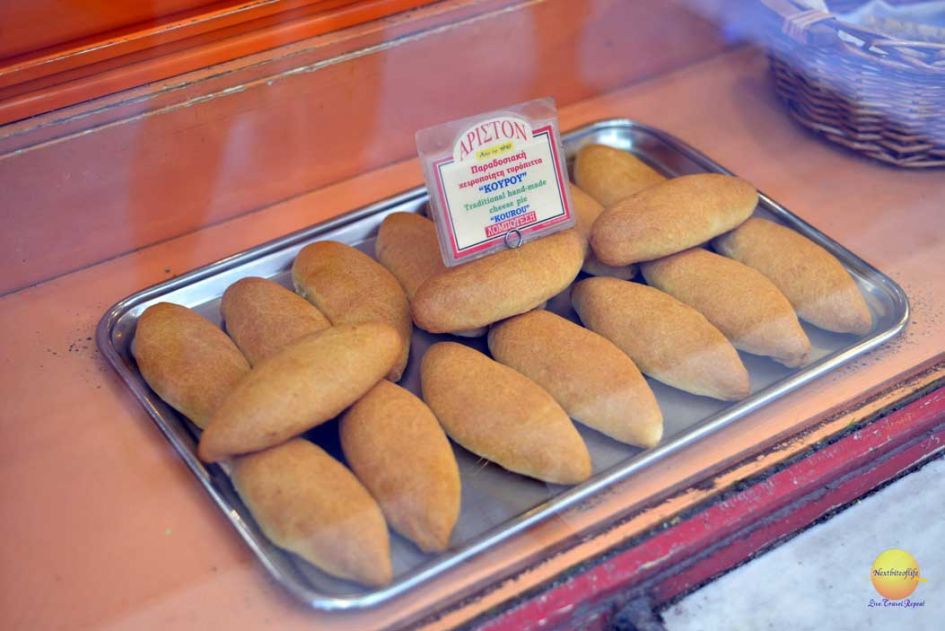 Cheese stuffed pastry, one of the many tastings during our delicious Athens food tour.

Traditional hand made cheese pie from an old family recipe. This eatery was full of locals and has been in existence since 1923, so you know they must be doing something right. I admit that l ate the crust and tossed the filling, it was just a bit too cheesy for me :-). Federico loved it of course. Anything with cheese has his name written all over it! 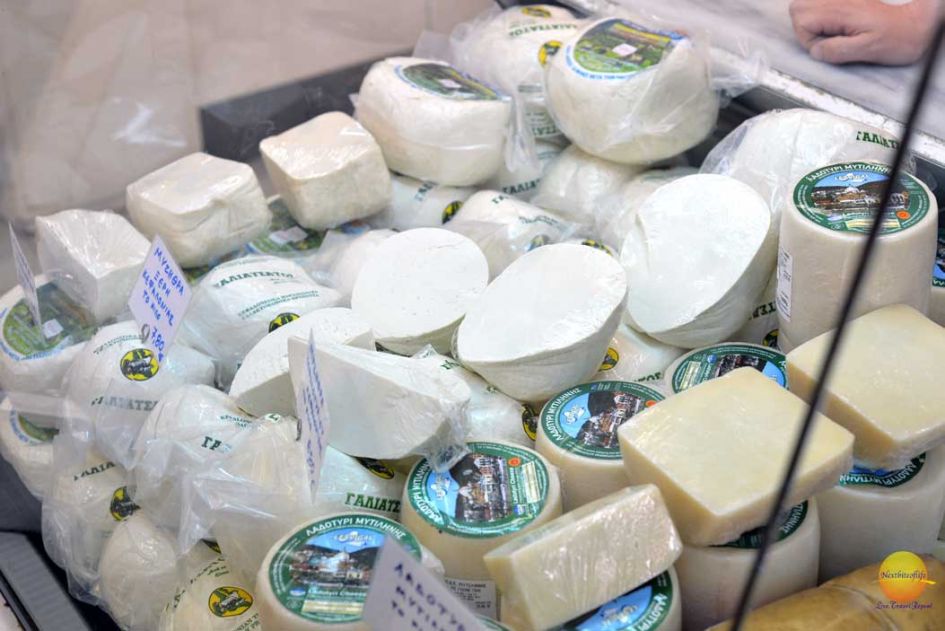 My favourite was the small head cheese in the forefront. Absolutely tasty.

No foodie tour is complete without sampling varieties of cheese. We visited another family run shop with wall to wall cheese offerings. I ended up tasting and loving one particular kind of cheese, only to find out that it was never exported. Such small quantities were produced because of regulations and climate. Amazing quality and taste. If you’re in Greece and see it anywhere, make sure to try some. 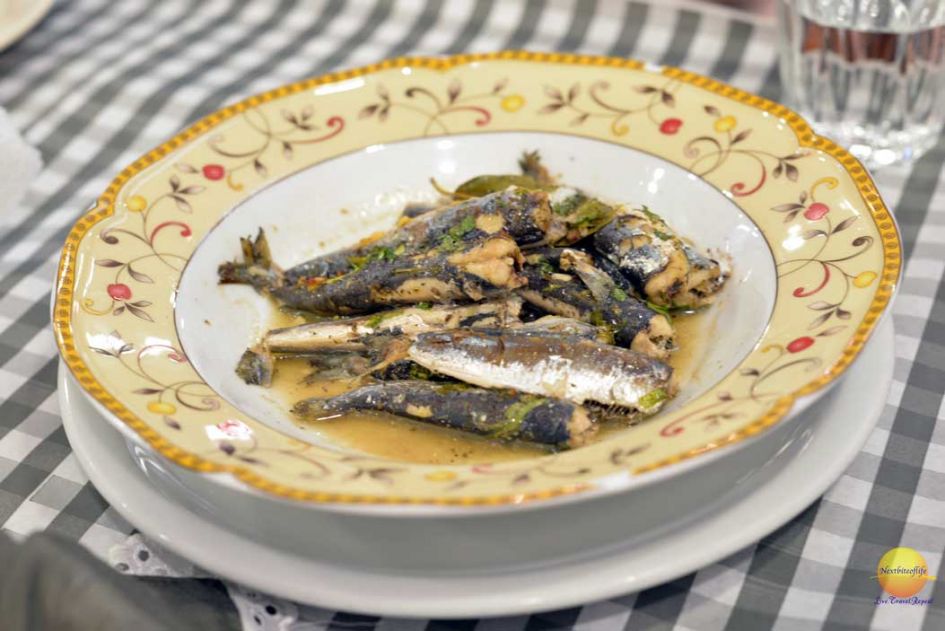 Mediterranean cuisine often involves sardines in one form or another, and here was no exception.

Yum, yum, yum! I have loved sardines since l was a kid and never tire of eating them. This was amazing. We walked through the Athens central meat market to get there, and it was eye-opening. There were rows of hanging pig heads for sale which l don’t think I’ve ever seen. The whole body, yes, but not just the heads. Elena said they were used in soups to add flavor, just like the fish head. Makes sense, we do the same in Nigeria and a lot of people love eating fish head and eyeballs even. 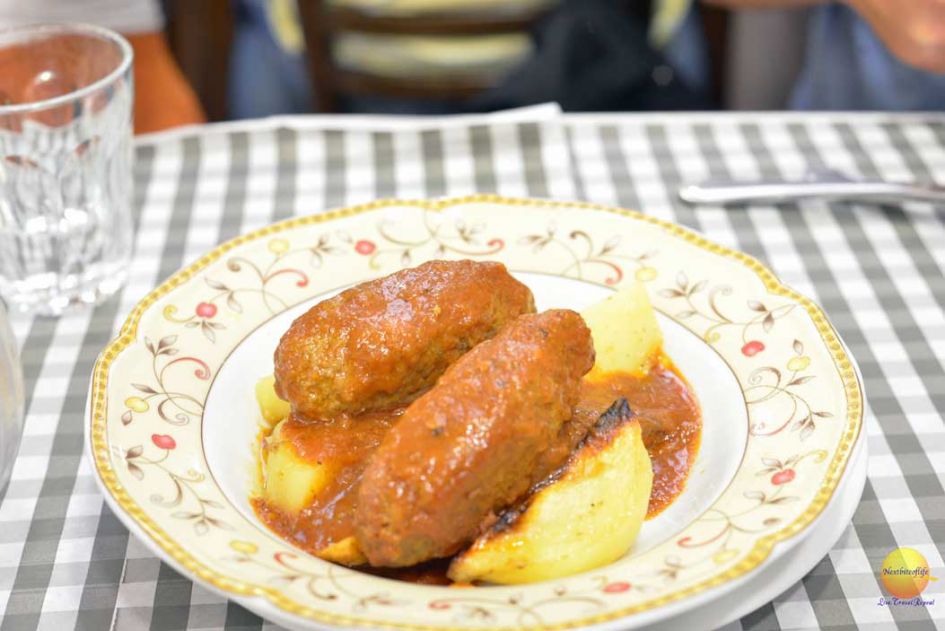 Similar to Italian meatballs, but with a little kick. Quite nice!

Spicy, oblong shaped meatballs. Made with cumin, garlic and cinnamon and stewed in tomato sauce, it was served with potatoes. Very filling and very good. My wish would have been for it to be served with rice so you could enjoy the stew even more. 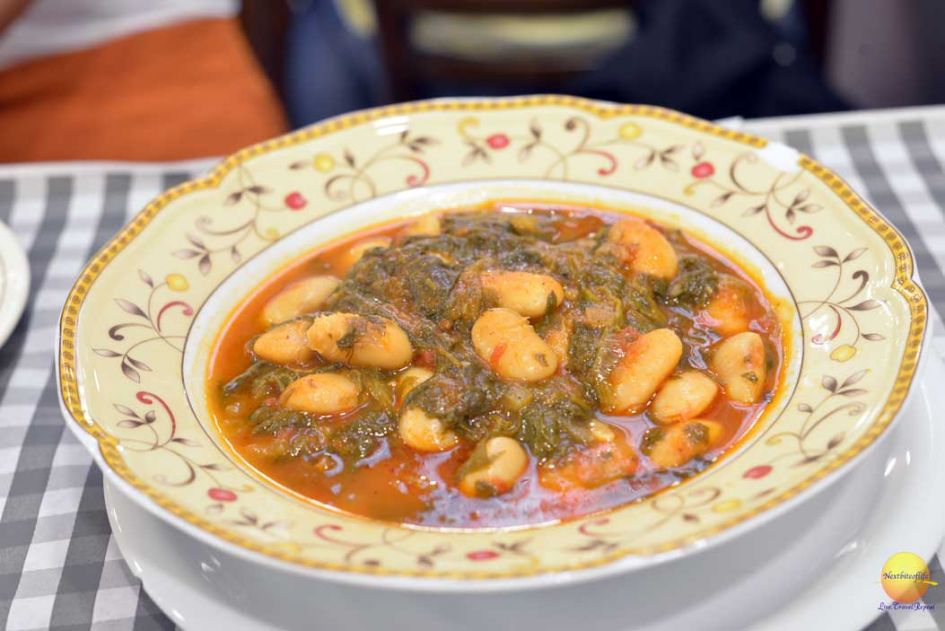 I can’t believe how much l liked this Greek food. It makes me almost want to try other good for you food. Almost!

Giant white beans stewed with spinach. I have to tell you that l would never have ordered this on my own. It sounds way too healthy. I had cleaned up my portion with some lovely bread before asking what it was and helping myself to another portion. Spinach? Moi? I’ll be damned if that wasn’t my favorite dish of the day!!! :-) 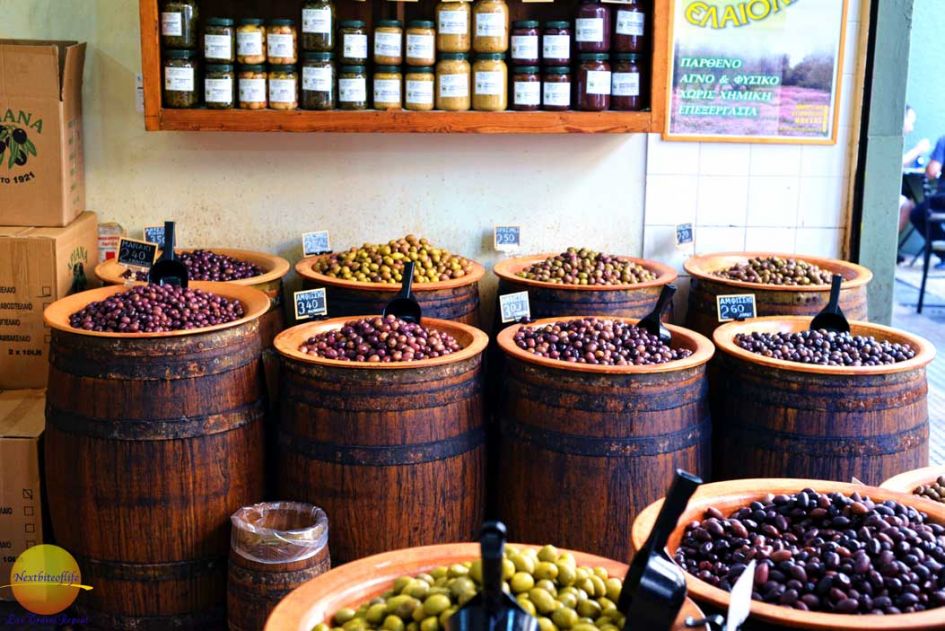 So many delicious Greek olive variety.

Did you know there are over 200 kinds of Greek olives? Neither did l :-) . I never used to like olives till we moved to Spain, and particularly the Andalusia region where you get olives with everything just about. Now, I have a couple of favorites. This olive store we visited sells the 33 top varieties. Laid out in open containers so you could sample before buying, it was a real treat to discover some new types of olives. They weren’t very expensive either. 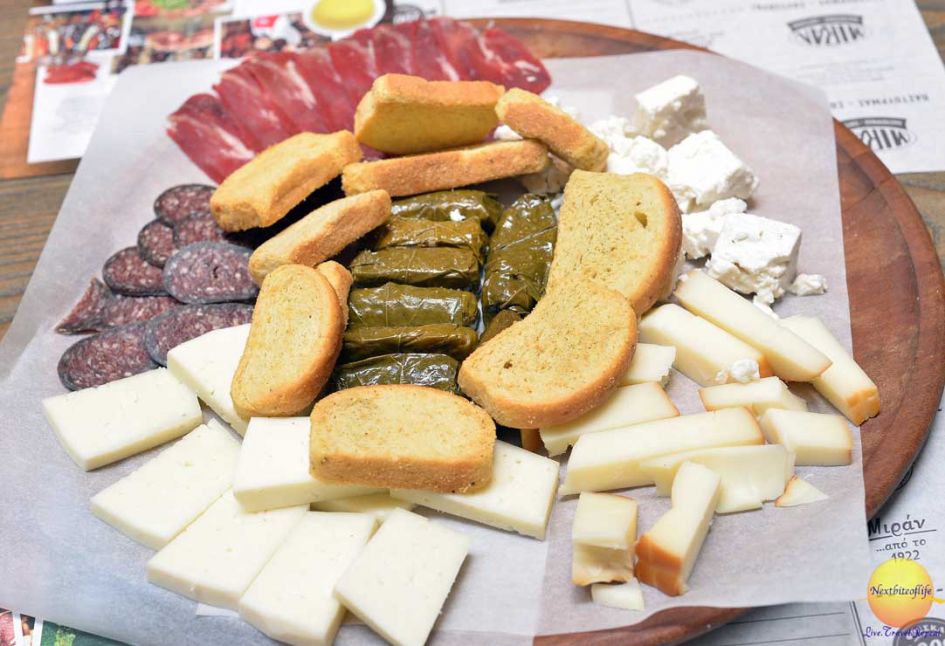 My favorite was the dried sausage. So intense and flavorful.

One of our last stops on the Athens foodie tour was a family owned charcuterie right in the center of Athens. Opened in 1922, it has become the go-to place for mouth-watering pastourma (heavily seasoned, air dried cured beef). We shared a platter of cold cut delicacies including feta cheese, dolmades (grape leaves stuffed with herbs and rice mixture till tender), sucuk (dry spicy sausage). 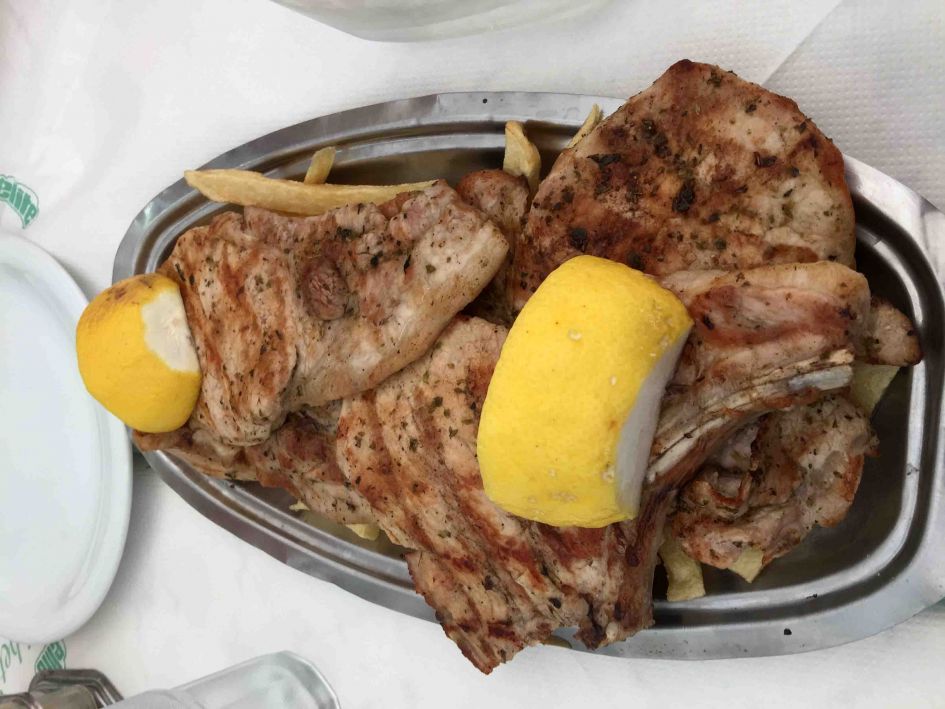 More Greek goodness in the form of pork! They were sensational.

Amazing! Simply amazing. Served on a bed of Greek fries. What can l say? We all let our mouths do the talking as we tucked in. 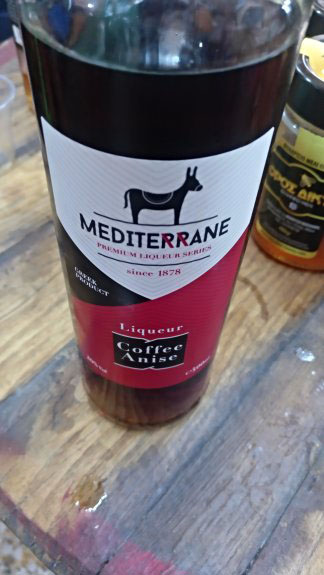 In addition to the clear Raki, we also got to sample flavored liquors such as this one.

Anise flavored alcoholic drink. It is roughly 52% alcohol. To me, it tasted like super intense schnapps. We sampled plain as well as flavored ones which the guy poured straight from a huge jug. I like it! Federico didn’t drink any at all, so l had to pick up the slack :-). There was more Raki on a couple of the other stops too. 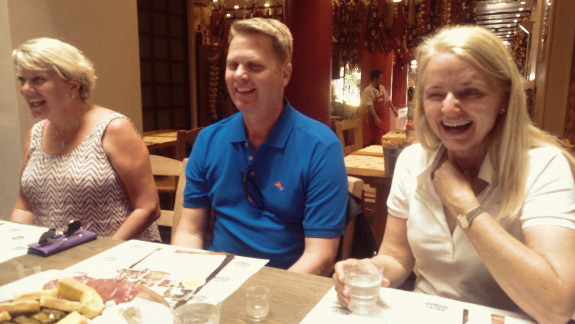 Looking for travel insurance? Don’t painfully lose money like we did. Protect yourself! 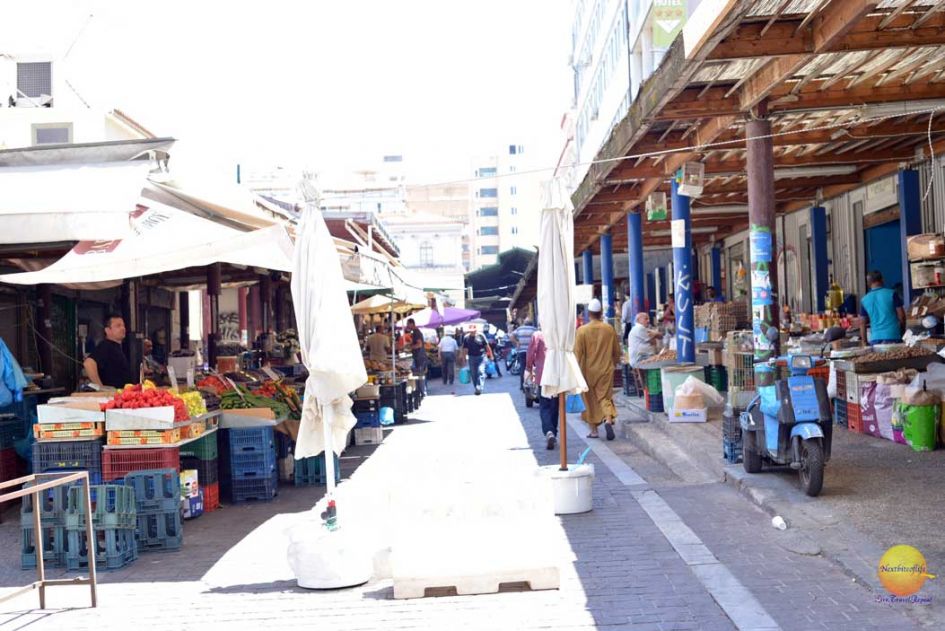 Walking the streets during our amazing Greek food tour in Athens.

It’s a given that Greeking.me has one of the best food tours in Athens. We loved the fact that we got to sample authentic Greek food at small, family run places. We also got a combination of food, culture and history of Greece. It was interesting to observe how Elena interacted with not just the staff of these establishments, but with just vendors in general that we encountered. Several times, they came up to say hello and tell us we had the best guide. I believe them too. A couple of times we ran into another small foodie group on a tour and l am positive there was no “warmth”, not from the guide, not from the staff and definitely not from the participants  themselves. I think they would have easily traded places with us. It wasn’t all due to the Raki either :-) . 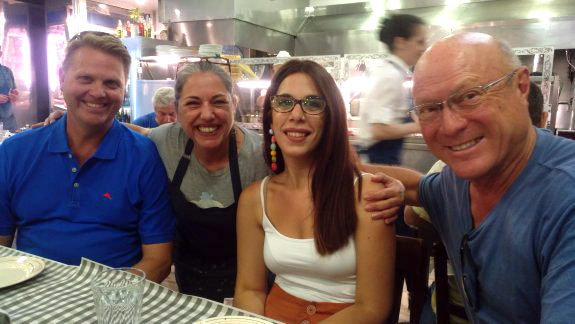 Elena was received so warmly everywhere we went. This woman gushed about her! I didn’t see this happening with the other group. It’s easy to see that she loves what she does. Enlightening people about her heritage.

Should you do a food tour in Athens?

Yes! A food tour is a perfect way to sample traditional Greek food that you might otherwise not try. Everyone knows to order the usual suspects. A Greek salad and maybe some tzatziki. This is so much more. If you’re lucky enough to have a knowledgeable guide like Elena, it makes for an even better experience.

She is Athens born and raised and knows the city inside out. Eateries that are hiding in plain sight that you probably wouldn’t have gone or know that they have the best food. The food tour has a nice mix of sweet and savory Greek food. It should be part of your Athens must-dos. In addition to trying Greek coffees, we were very happy to eat! :-) and for sure Greeking me food tour is one of the best culinary experiences in Athens without a doubt.

Tips for the best foodie tour experience in Athens: 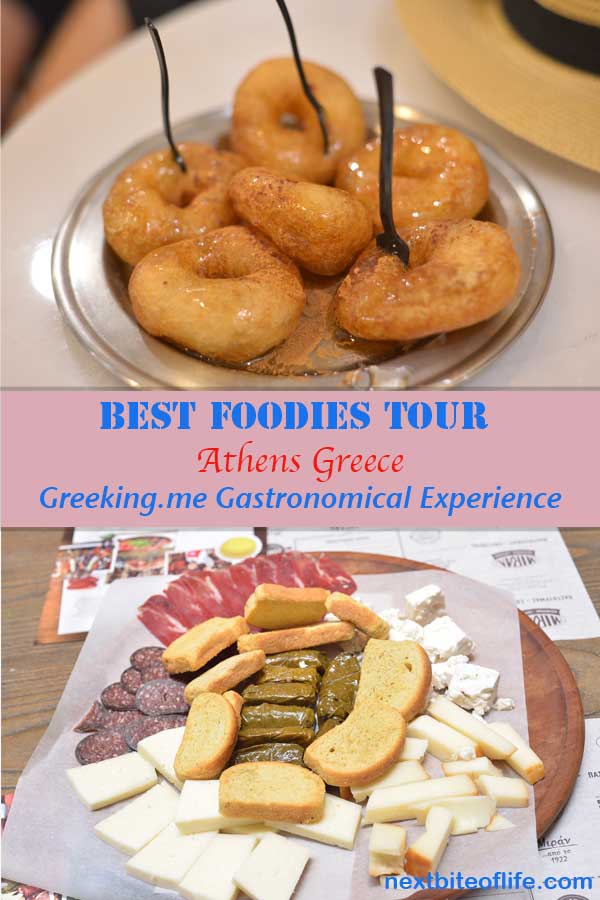 Have you been on an Athens food tour? Was it a fun experience? Would you agree it’s the best foodie tour in Athens? Any food tour anywhere that brings back awesome memories to share?