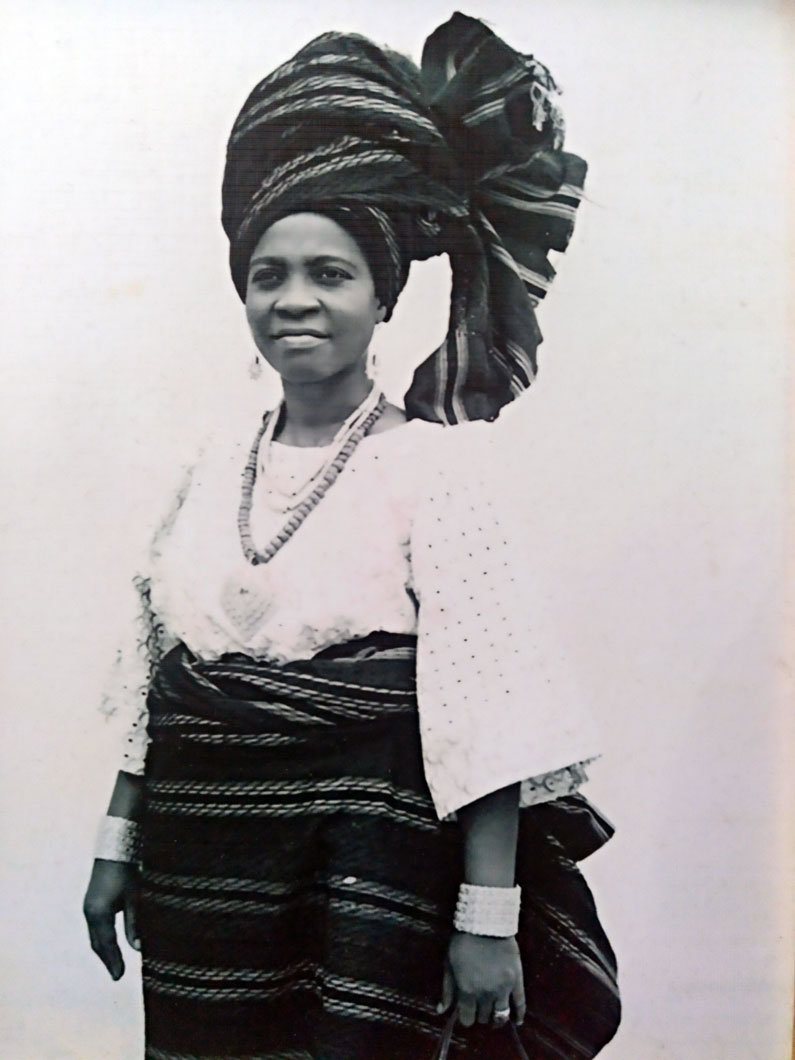 I knew it had to happen at some point of course. It’s the cycle of life. You’re born. You live. You die. Simple. Tell it to the heart though and it’s not so simple anymore. A curious thing happened to me one night a few weeks ago. For some reason, I went on YouTube and watched a video l had not seen in over two years. It was a video of stills l had put together of one of my niece’s wedding 7 years ago.

My mum was on it and seemed to be waving (really holding her hand up in prayer) and l was cracking up my MIL and Federico with my dance moves. I even put it on FB that night. The next morning, my brother called to tell me that mummy had passed away a few minutes before his call. I have to believe that she was trying to say goodbye to me. Here are some of my recollections of this remarkable woman who was lucky enough to have a long life.

Nigerian tribute to a mother: 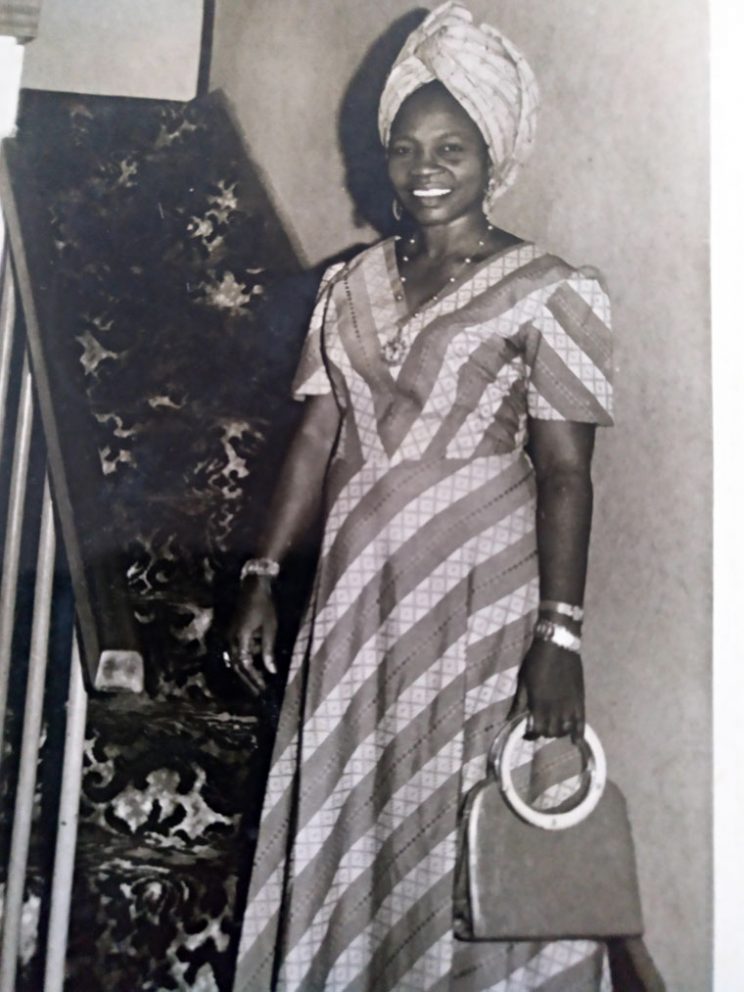 My mother was born over ninety years ago in a tiny village somewhere in Ijebu, the capital of Ogun State in Nigeria. Her parents were really, really poor. Yes, her school was miles and miles away from home and trekked it everyday. After school, she also sold little condiments from a little tray atop her head. She definitely had a tough life. She, along with my uncle were the only 2 children out of a total of 13 (including 3 sets of twins) who survived past the age of 15. There was a span of two weeks where she lost 3 siblings, all complaining of headaches and dropping dead. The first time the pastor comforted my grandmother. The second time, he tried as best as he could. The third time he just left the bible at her bedside because he had no words. Imagine burying eleven out of your thirteen kids. I am surprised my grandmother never went insane. Faith really is a strong thing. 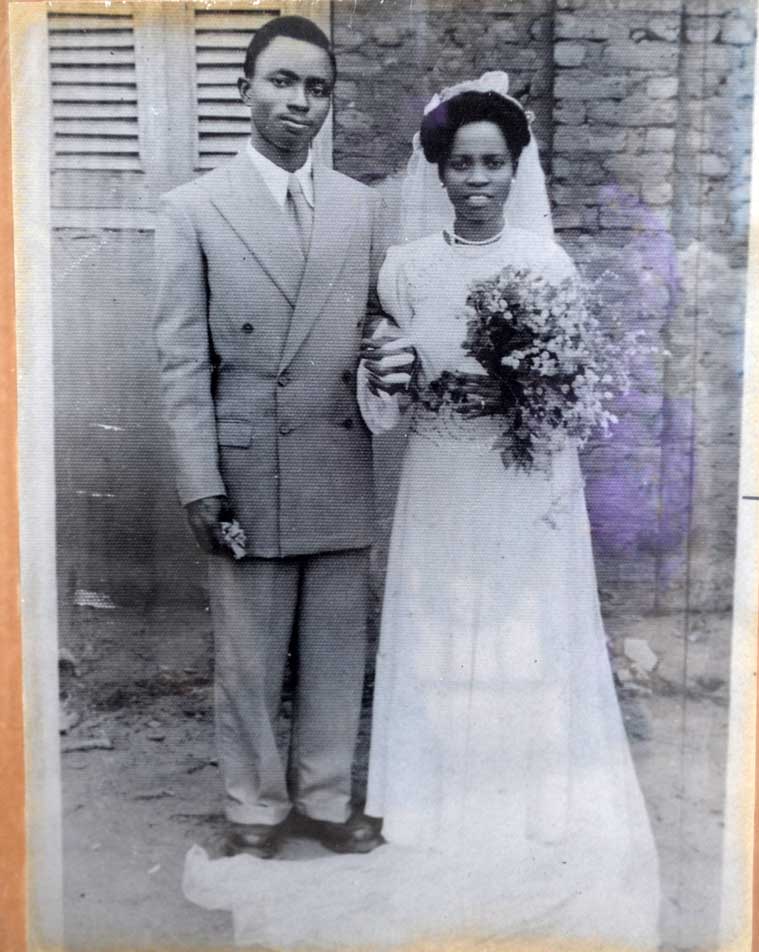 My mother went on to become a teacher and a lot of people at her funeral had plenty of stories to tell about how tough she was. I always delighted in telling people that she was just as tough on her kids as she was to others.

She was married at 25 to my father and they went on to have eight kids together with a marriage that lasted over 40 years before he died of cancer. She was the one who taught my dad how to read and write in his late teens (his family could not afford to send him to school). Once he started his business and started to prosper, he decided on an experiment.

He asked her to come and work at his company. Within months, she had re-organized the whole place in her own way and the profits soared, allowing him to go on to other ventures. Soon enough, a lot of businessmen started doing the same. I am forever grateful that l was born when things were going well for them. My oldest sister till today will not eat eggs because the family had a few chickens and lived off eggs basically for years in a one room apartment. One room! 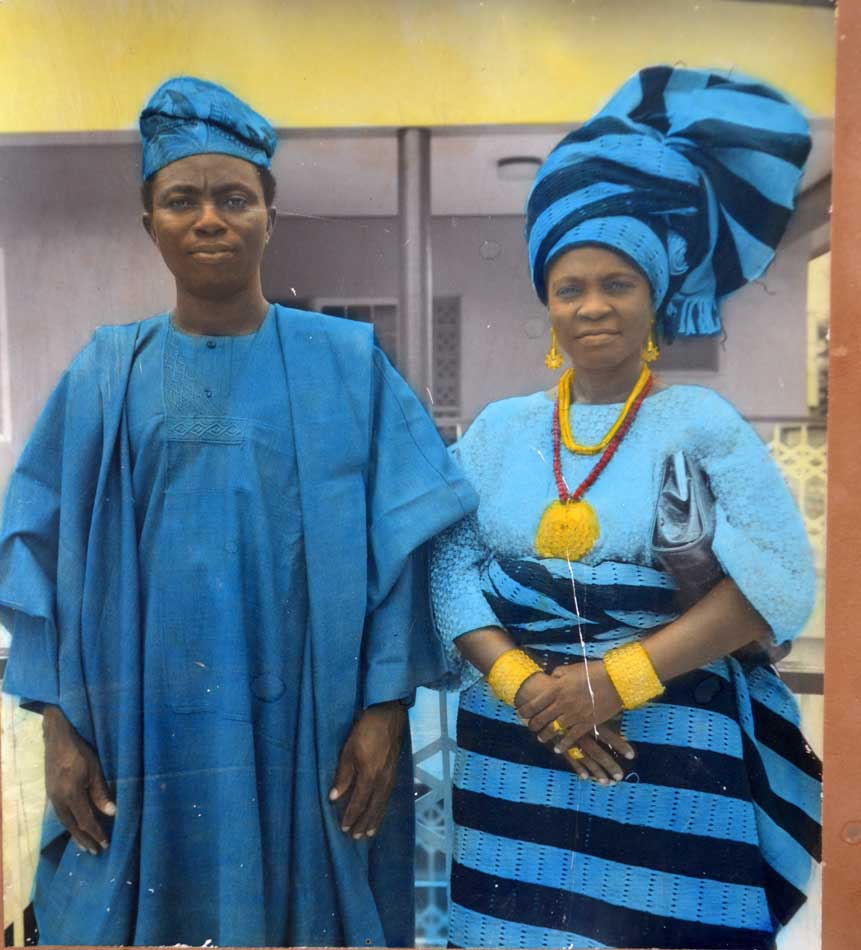 My mom loved to dress up and shine! She also had a penchant for gravity defying headgear :-). I always marveled at the way she would just tie them without a mirror on anything and the higher, the better too.

My love for travel comes from both her and my dad. They traveled together and alone. In addition to visiting us kids in whatever countries we were, she also racked up numerous visits to Israel (she just loved that place), Canada, Japan, Kenya, U.K, Mexico, Italy, Spain among others. I hope to visit as many as she has in my lifetime. There was a big turnout for her funeral despite the fact that she had wanted a solemn one. In addition to the kids she raised, we had so many cousins, extended relatives and children of friends who lived with us growing up. She was the one parents threatened the kids with. “Keep misbehaving and l’m sending you to Mummy’s house”.

No matter how tough you thought you were, she was tougher :-). Nope, she did not spare the rod at all. In fact, she had canes stashed all over the house so you didn’t have to go far to go get the stick she would beat you with. I always used to resent her for one reason or the other, but when l got older, l came to realize that if l had kids, I would discipline them in exactly the same way. She loved kids, but she didn’t let them get away with anything. Till today, I still have trouble deciphering between blood relatives and friends as we all were raised together and if one was older than you, then it was brother this and sister that.

Here is a snippet video with my cell phone by one of my cousins. This was after the church service.

The funeral was a celebration of her life and so there was happy music and a lot of story telling over 3 days. I have to admit that l broke down a lot over that time. I know she was old and that l am 53 already! :-) . The most annoying part to me were people asking me why l was crying, that l should be happy..blah..blah..blah! I’m like f**k off! This is my mummy. Even if she was 200 years old, I would still cry and be emotional.  Her health had deteriorated badly weeks before her death, so l think my siblings had some time to get used to it and were thankful she was spared more suffering. This is one of the hardest things when you live away from family and tragedy happens. I shared some images of her 90th birthday on the roundup post for last year. I am so happy that l got to see her. 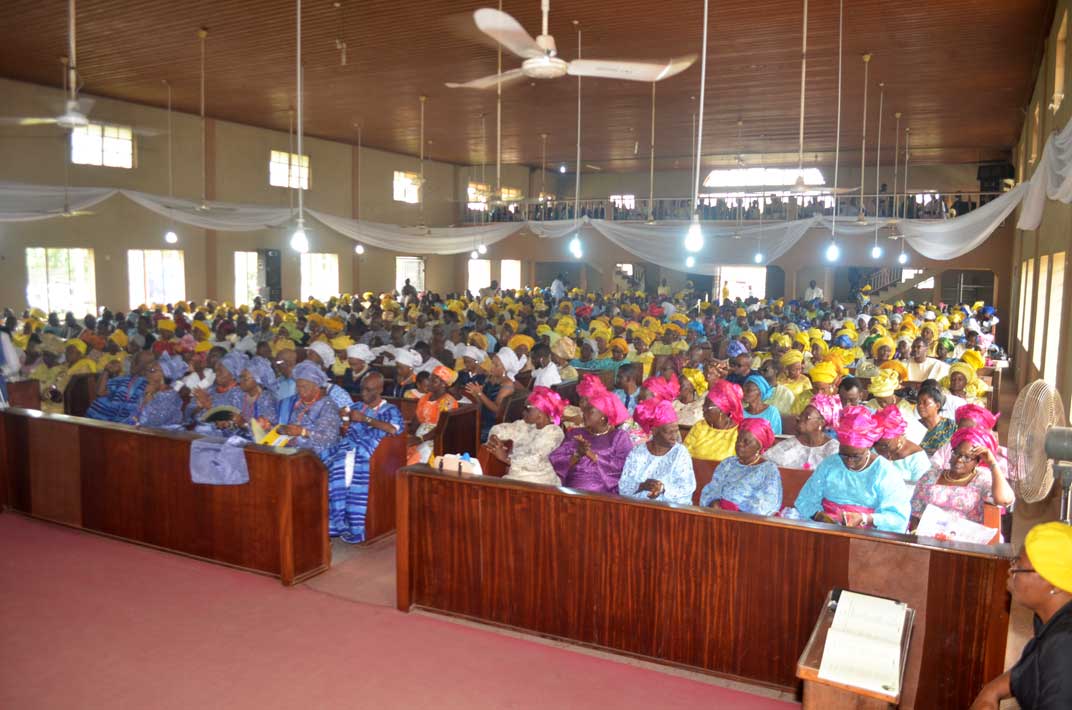 The church service for mummy’s funeral.

Tribute to mother at her funeral:

After the church service, we sent everyone to the reception so we could bury her privately. She has now joined her husband who has been waiting some twenty odd years for her in the front of our family house in the same village where he grew up (hers is less than a mile away). The family spends every Christmas in the village and will continue to do so. 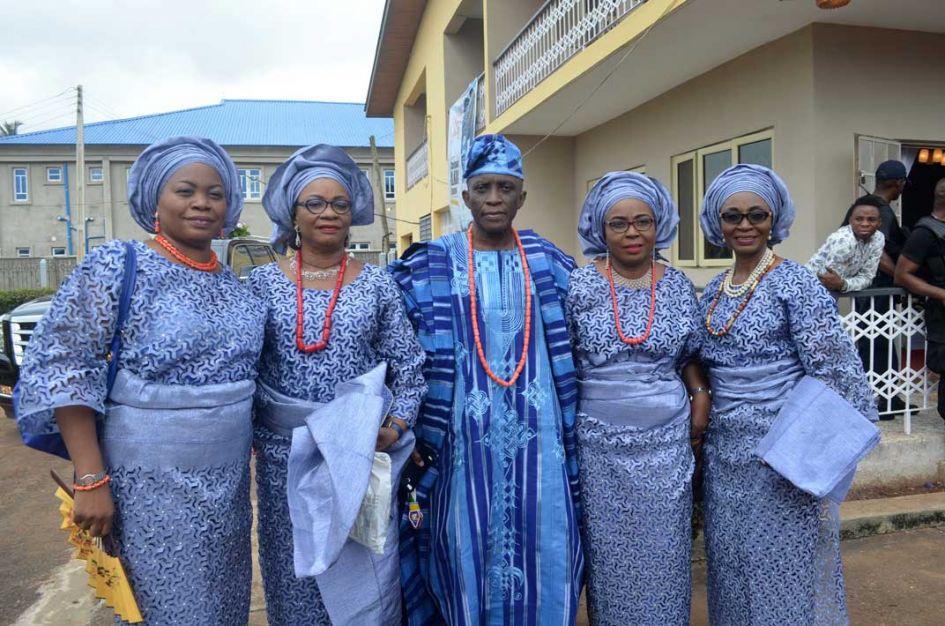 Some of her kids.

So, this is where I’ve been for the past 6 weeks. Nigeria. Celebrating my mother’s past life. Celebrating my nephew’s new married life. Reminiscing about my early life. Bonding and re-bonding with family and friends. If you follow us on Facebook, you know that is was bitter and sweet because shortly after the funeral, we celebrated my oldest nephew’s wedding and l posted some images and video from that event. I was just not ready to share this one as l was feeling very verklempt, trying to process the whole thing. We visited Romania shortly after her death as it had already been planned. We had a wonderful time and will tell you about it soon. I think the fact that she wasn’t young and l had seen her recently made it so much better. I was lost for months after my sister’s passing, but it also galvanized us to start living the life we wanted. Early retirement. 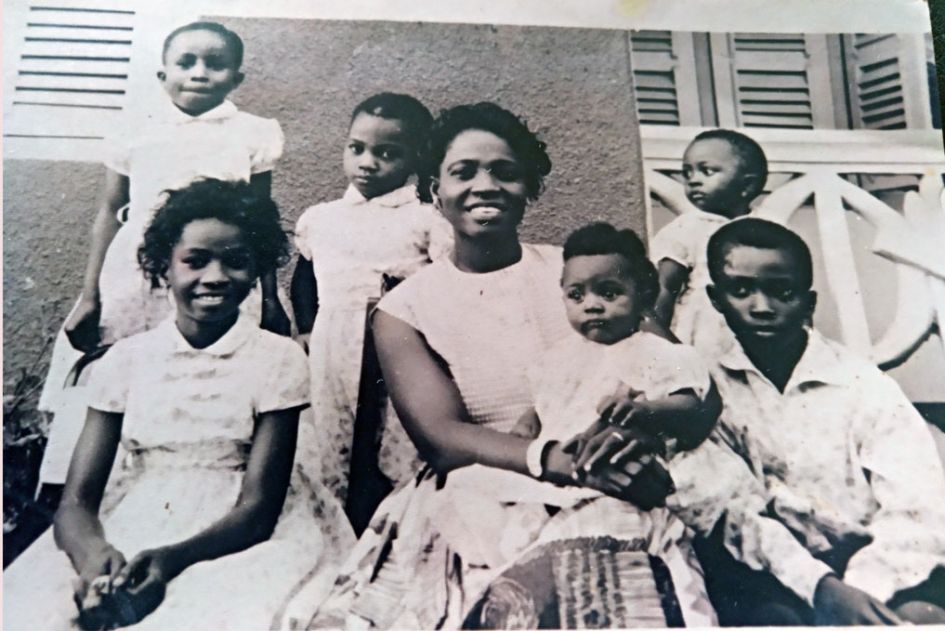 My favorite picture of her. If you’re looking for me, I was a bun in the oven then :-). Sad that the 2 missing from this pic now is her and my late sis sitting on her lap.

One of my biggest regrets in life is that l never achieved the level of success of my parents. They came from nothing and made their marks in the world. In those days Nigeria was a much more powerful nation. One dollar was equal to 59 of our cents. Now, $1 equals 358 of our Naira! A reversal of fortune indeed!!!! Truthfully, I never had the ambition, perhaps because l did not have a hard life growing up like they did and the comfort made me less ambitious. What l did learn from them was hard work pays off. They sent all of us to school and told us to make our own way in life. They made and spent their money while alive. Good for them. My thirty years of hard work that lead to my early financial independence makes me happy. It’s enough for me and wouldn’t have happened without their sacrifices. 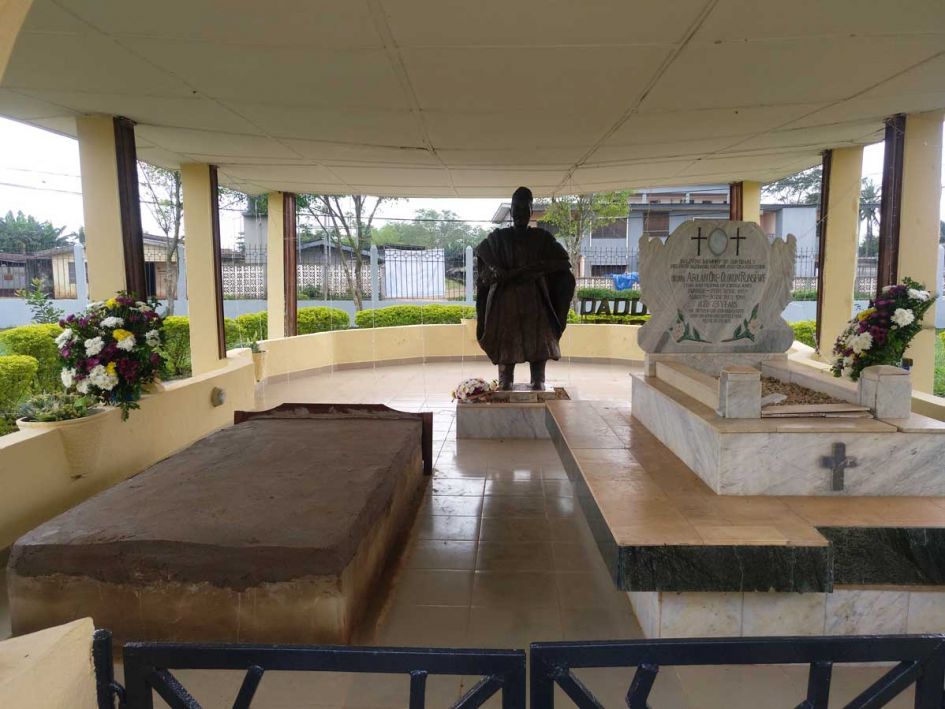 She is now resting beside my dad.

Thank you mummy for everything. Even though you never said it, I still say l was your favorite (will never understand why my siblings keep fighting me about that! :-) ). You were a force of nature, a stubborn, educated, charitable soul who always fought for what was right, no matter the consequences and made many fear you (much to my delight). I will miss you always. Rest in peace.