I Still Miss My Father After All These Years. 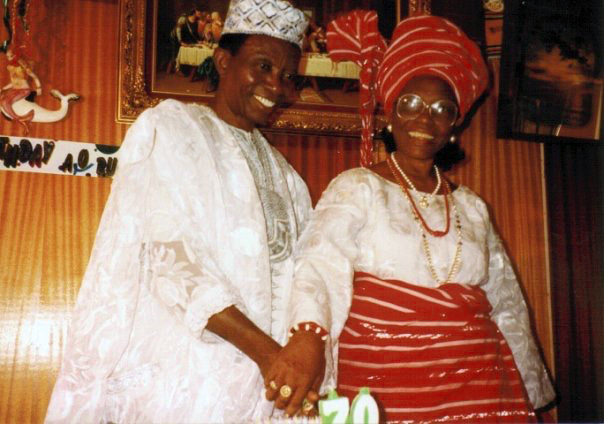 I miss my father:

I still miss my father. Everyday. I rarely talk about my loss to people. He died almost 21 years ago at the age of 72. It’s hard for me to believe that so much time has passed. The memory of his death is still so vivid in my mind. I thought he was invincible.

A daughter’s tribute to her father:

My father ate right, didn’t smoke, exercised and had the biggest heart ever, almost to a fault. It would take him and my mum 5 full days to finish one bottle of Guinness. One phone call at work shattered my world.

My father had suddenly started bleeding about 3 weeks prior. They were unable to treat him in Nigeria. It was ultimately colon cancer. Even though the doctors suspected it, they had no equipment to make a proper diagnosis. The decision was made to transfer his care to a London hospital.

Unfortunately, a visa was only granted to my mother. My siblings were all refused visas. One of the curses of having a third world passport is that you are often denied entry to the first world countries. They just assume that people will go and never return. I still get pissed when people say “anyone can travel”. I am happy that medical tourism exists. He was packed with ice and put on a plane. 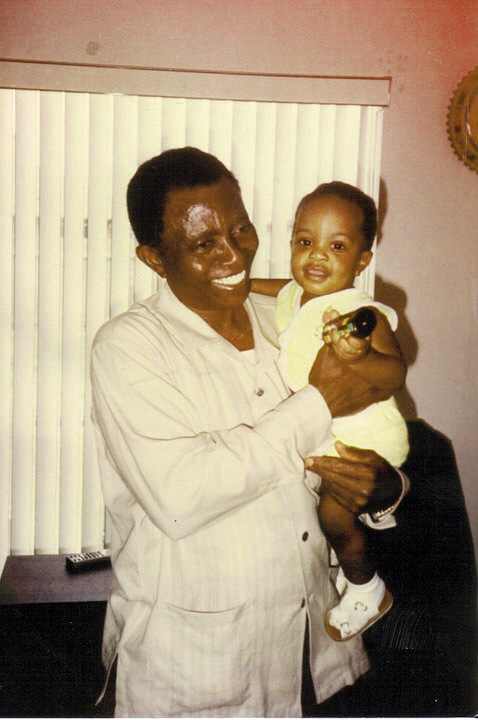 With one of his many grand children.

The long journey to my father’s side:

I tried speaking to my father during that phone call, but couldn’t understand a thing he said. Not a thing. I immediately called my supervisor and booked myself a flight from Los Angeles to London the next day. I sobbed my way through the long haul flight.

The staff at Virgin Airlines were so fantastic. They put me in first class and left me alone. It was no time to be cheap. I took a black cab to where my mother was staying. As the cab pulled up, the hospital called and said we should come right away, so the cab took us directly to the hospital. I can’t tell you how grateful l am that we made it to the hospital in time.

The last minutes with my father:

Seeing my father so frail and in obvious pain  bought tears to my eyes, but l had to be strong for my mom. I held his hand, told him that l loved him, that l was there now to take care of mummy and it was okay for him to leave. He died maybe five minutes later.

He tried so hard to tell us something, but we couldn’t understand. I think he had just been hanging on so he wouldn’t leave my mum alone.  Eight kids they had, and l was the only one who was with him at the last-minute.

I have never told anyone what transpired that day, not even to my siblings. I have always wondered “why me?”. Why was l the only one there.. and why years later, l was the only one there again, holding my sister’s hand when she also passed away from her cancer? I felt guilty for years.

My role as a guiding light:

About four years ago, l finally mentioned that to one of my older sisters. Her immediate reply? Maybe that was my purpose. To be a guiding light. I haven’t felt guilty since. All well and good, but l would rather it not happen again.  My father was well-loved. That was obvious at his funeral which lasted over six hours with hundreds left in the heat as the church was too crowded.

The guests at my father’s funeral insisted on telling their stories of how my father had helped them over the years. He was a God-fearing man who believed in helping the less fortunate and turning the other cheek, complete opposite of my mom, no cheek turning there! :-) .

My father grew up a dirt poor in a tiny village and was destined for a life of servitude. He ran away to the big city in his teens to make his fortune. He never forgot his roots and made sure to come back and help the village that is now known as Little London. My mum is frail at 89, but still hanging on.

Update: My mother has since passed and is hopefully now reunited with her beloved husband. 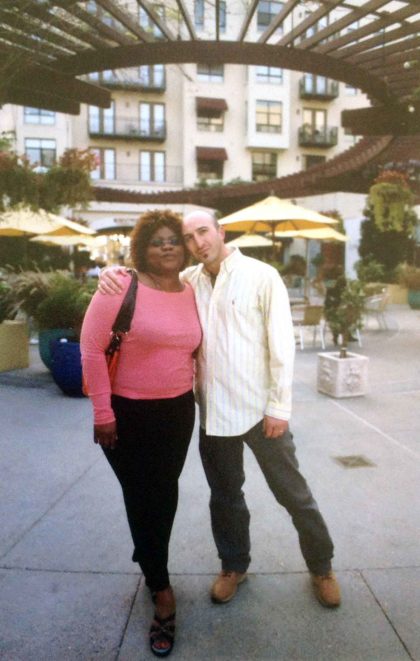 We still miss our fathers.

I have hated the phone since that day. I still hate the phone, and rarely answer it, weird as it sounds. Five years ago, we got a call from Rome while we were still living in Houston.

Federico’s father had a fatal heart attack while getting coffee. I miss him too. He was also a great guy. Lover of life. Despite the fact that he didn’t speak English and l don’t speak Italian, we still found a way to communicate.  We will always have fond memories of the ones we love, even after they have passed away. It is still painful.

I have tried to live my life in a way that ensures that my parents would be proud of me. I can say without a doubt that he would proud of the person that l am now. Cherish the people in your lives because life really is fleeting. I have a favorite saying, my altered version of the famous poem.

My conclusion is that we should cherish our loved ones. It’s important to keep touch as often as possible because we have no idea how much time we have. Never take things for granted, especially life.

I miss my father everyday, my mother too. That will never change. May they continue to rest in peace.