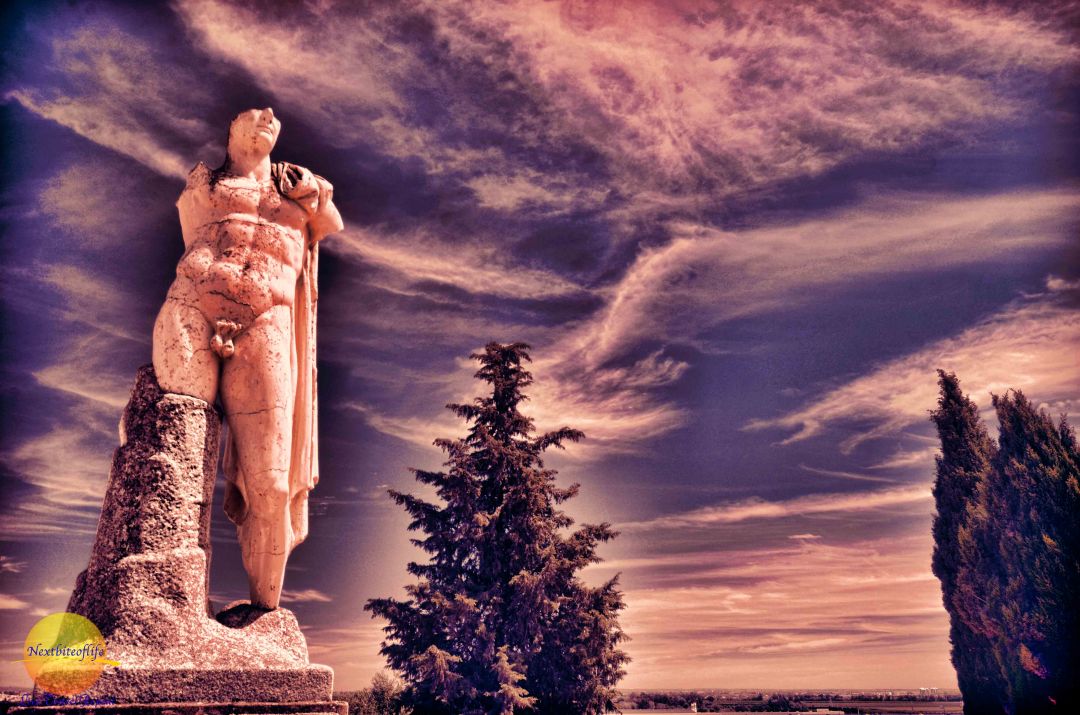 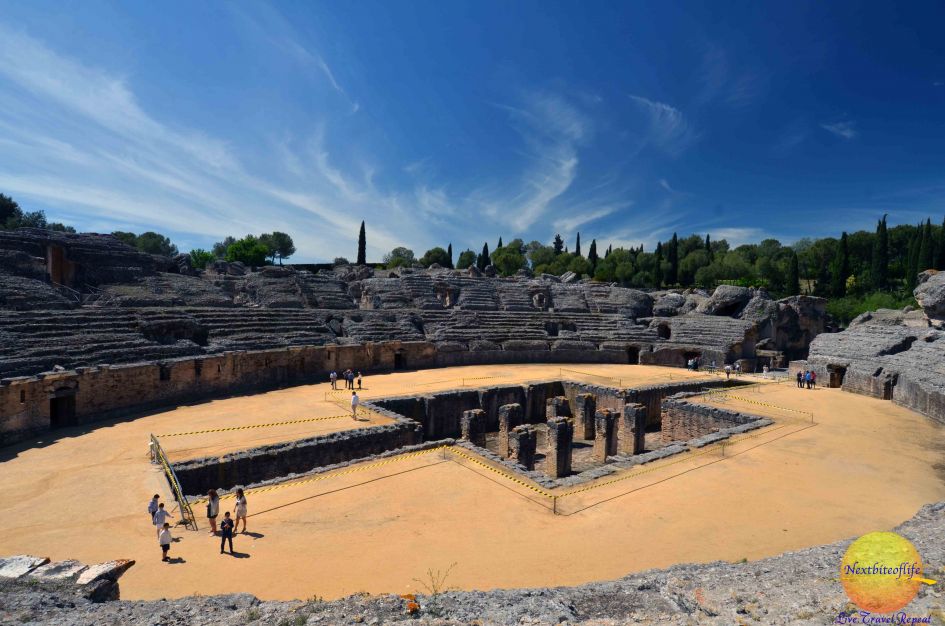 The Italica amphitheater, third largest Roman one. This makes for a great Seville day trip.

Where is Italica (Santiponce)?

Santiponce is nestled on the ruins of the old Roman city of Italica.  This post goes with the Podcast #2, where l try to describe the Roman ruins of Santiponce, a city which is about 6 miles north of Seville center.

How to get to Italica from Seville?

Take the direct Seville to Santiponce bus from the central bus station at Plaza de Armas or if you have a rental car, (for example from a company that compares prices so you can get the best rate), drive.

Italica was founded in 206 BC by General Scipio, also known as “The African”. He used it to settle his war veterans from the Punic Wars against Hannibal and the Carthaginians. It was the first city outside of the Italian Penninsula. It was home to Roman Emperors Trajan and Hadrian.

The city is also thought to be the birthplace of Emperor Theodosius.  Emperor Hadrian especially, was very partial to his birthplace and therefore thrived during his reign. It enjoyed great prosperity for a long time and was a busy river port before it was eventually forgotten and people moved towards Seville. The city, in its heyday, was big enough to have its own Bishop as well as troops guarding the fortress.

In 1740, Seville ordered the destruction of the walls of the amphitheatre and build a dam for the Gualdalquivir river. A lot of the stones were actually taken from Italica, and used to build Seville. It seems to be a constant work in progress. New things are being discovered as they dig up more of the ruins. The excavation work is visible as you tour the grounds of the old city. 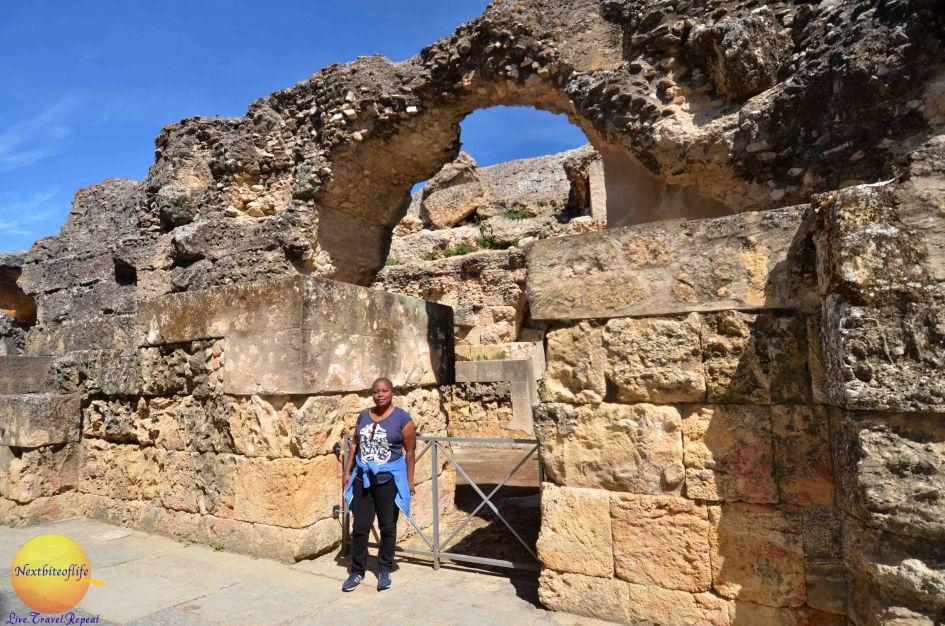 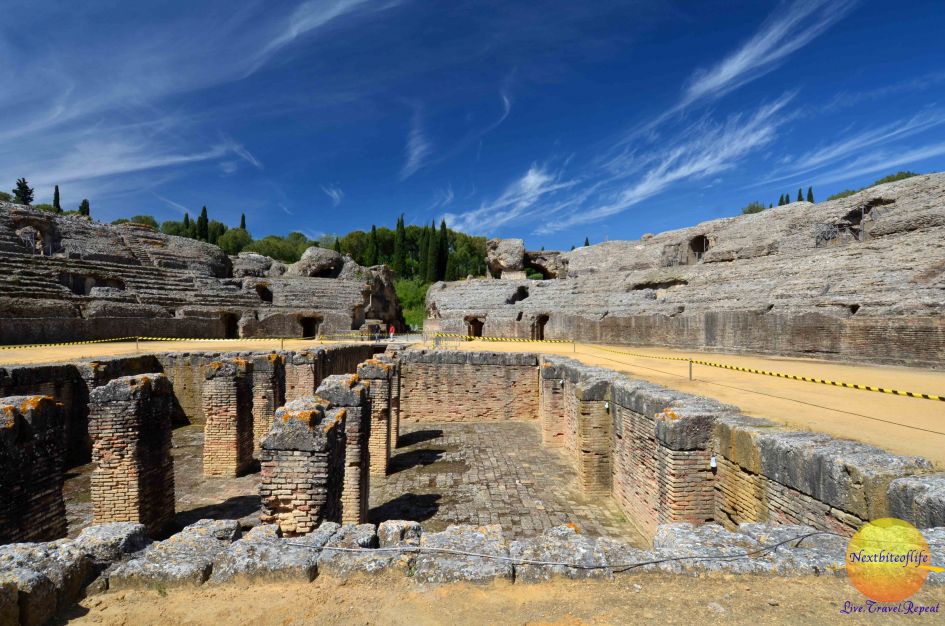 Seville tourism must do. The Italica amphitheatre where the gladiators were kept. 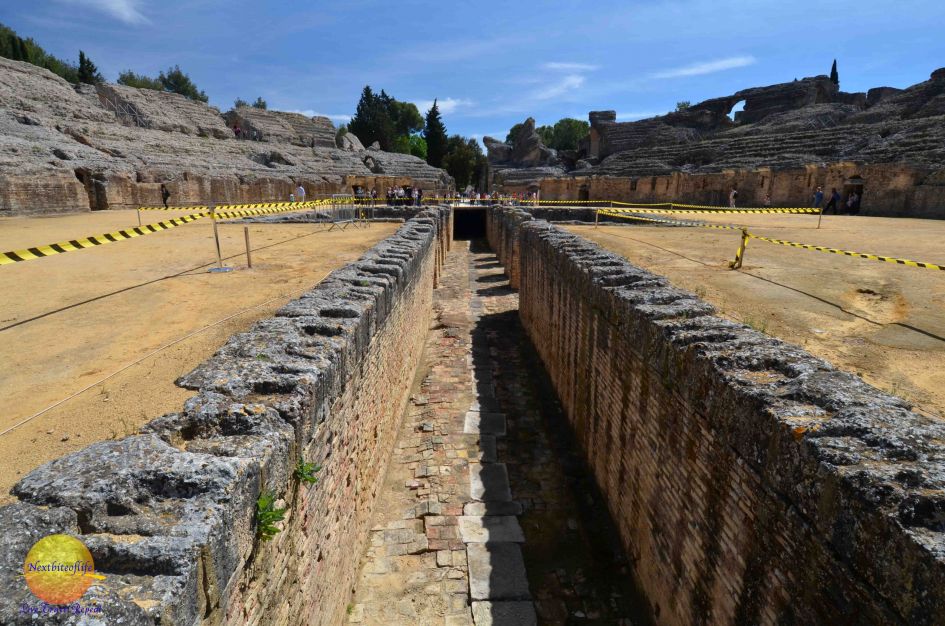 Seville sightseeing should include a day trip to Santiponce. I can’t imagine how it must have felt, knowing you were walking to a certain death :-(

Italica was destroyed by floods that were frequent because it sat on the banks of the Guadalquivir river. The floods of 1603 buried Italica forever. The few survivors took off to higher ground and sought solace with the monks at the Monastery de San Isidro del Campo. With their help, they were able to build the new city of Santiponce almost entirely on top of the old ruins of Italica (old town).

Footprints of the old houses are still present. Cobblestone streets where the carriages come through are well preserved. There are pillars that have withstood the test of time. Tiles from the bath houses are intact, even after thousands of years. The Italica forum seats 3000 people. Saint Isidro of Seville had been buried in Italica. His remains were later discovered and transferred to Leon. 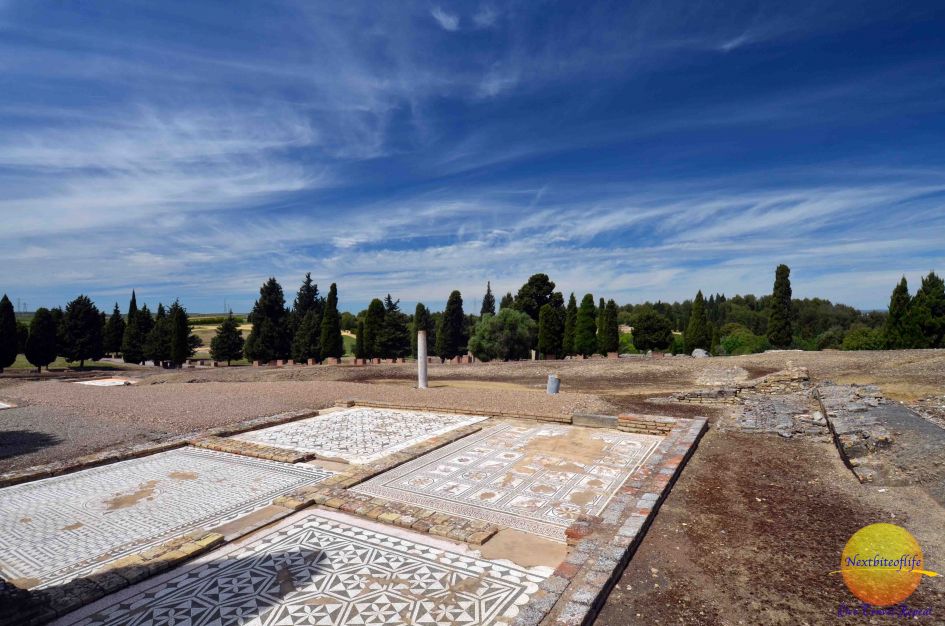 What to see in Seville. Amazing detailed tile work that has survived the elements.

Get your free quote  on travel insurance. 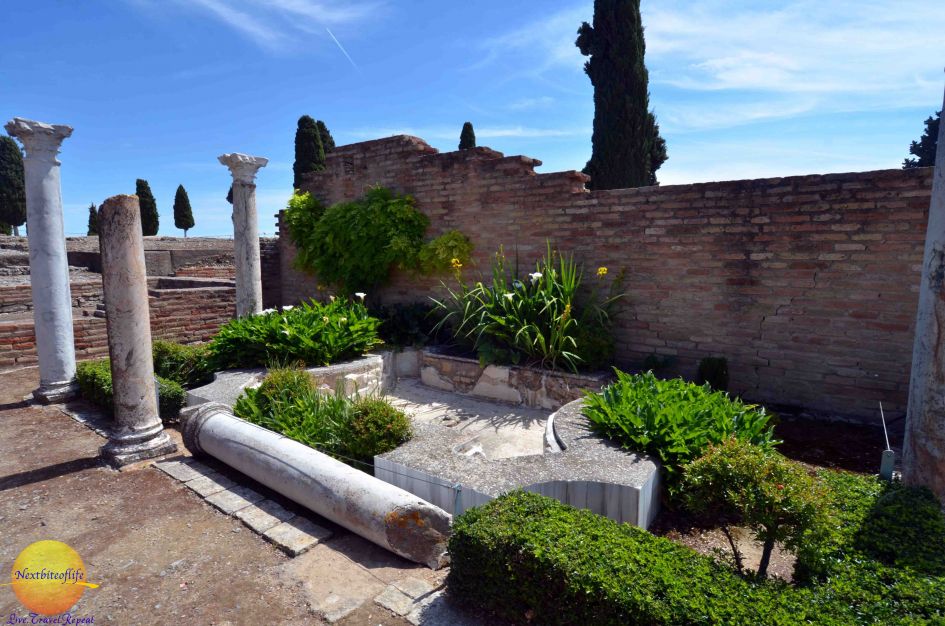 Italica Sevilla – House of the birds at the Seville Roman ruins 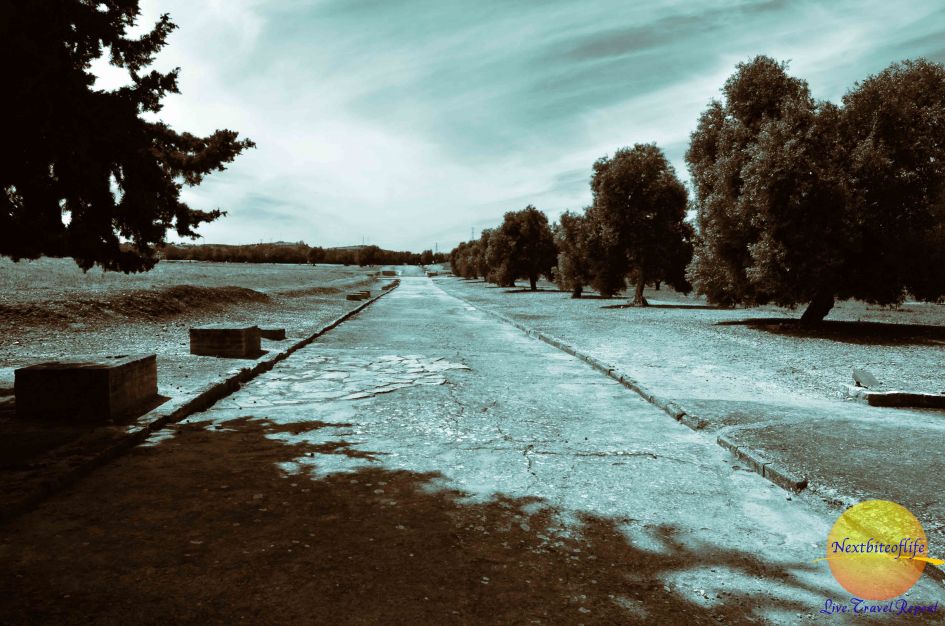 I can picture the old days of Italika Spain in my mind..

The amphitheater in Italika has a seating capacity of 25,000, and dates back to the times of Augustus. It feels surreal to be walking on the same arena that gladiators risked and lost their lives on thousands of years ago. Give yourself about 3 hours plus to be able to see and appreciate everything.

Entry fee is only 0.75 cents! I was completely gobsmacked! I think they would make more money if they just put a bucket out there for donations or something.

Is Italica worth visiting?

Yes! I highly recommend a trip to Santiponce to see how the Romans lived in the past. It is obvious that there was a lot of prosperity in the old city. The preservation is amazing because even though there is the new city of Santiponce built on top, it did not cover all of the ancient ruins. The price of admission makes it a no-braienr.

Click here to find the best priced hotels in Seville. 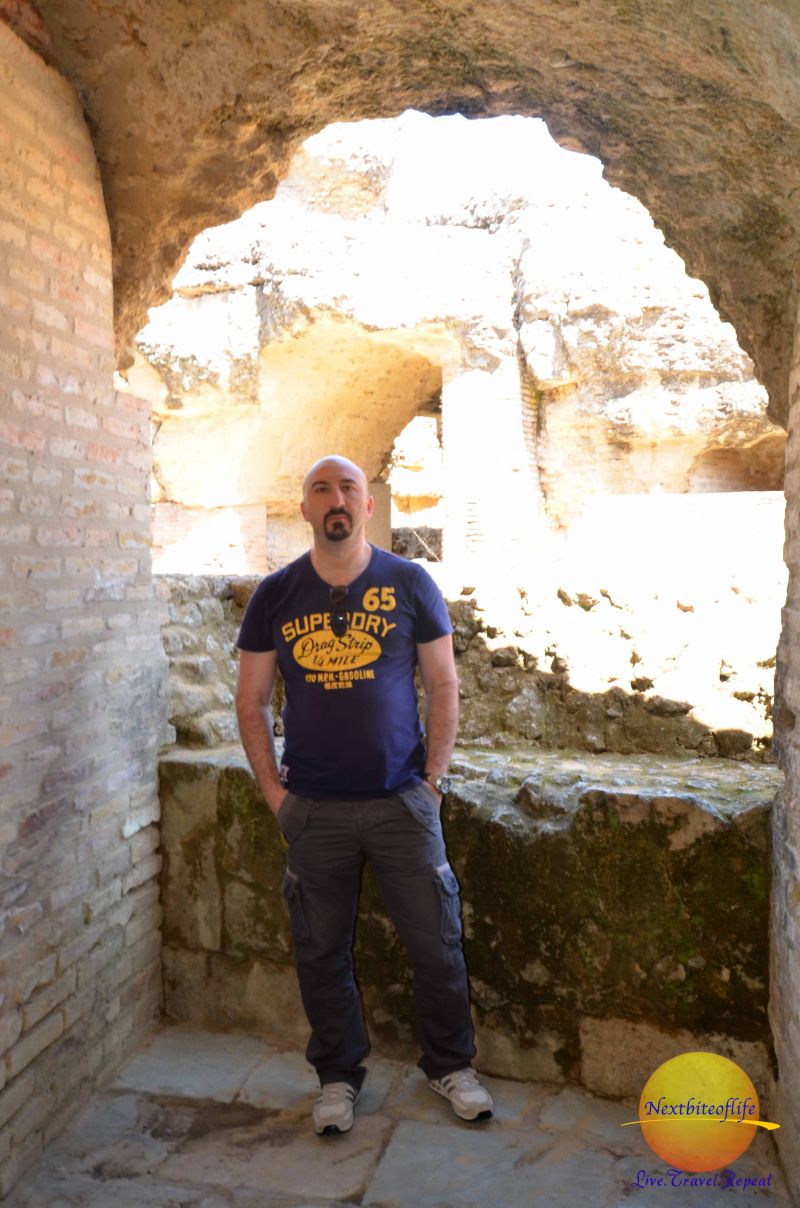 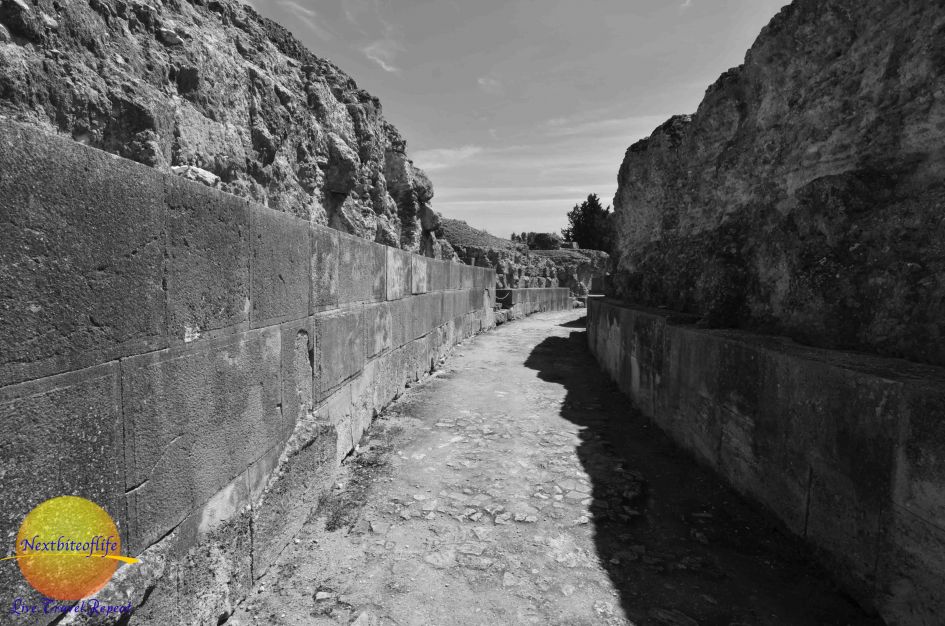 Way to the upper seats. Just take the Santiponce Sevilla bus from plaza de Armas to get here from Seville center 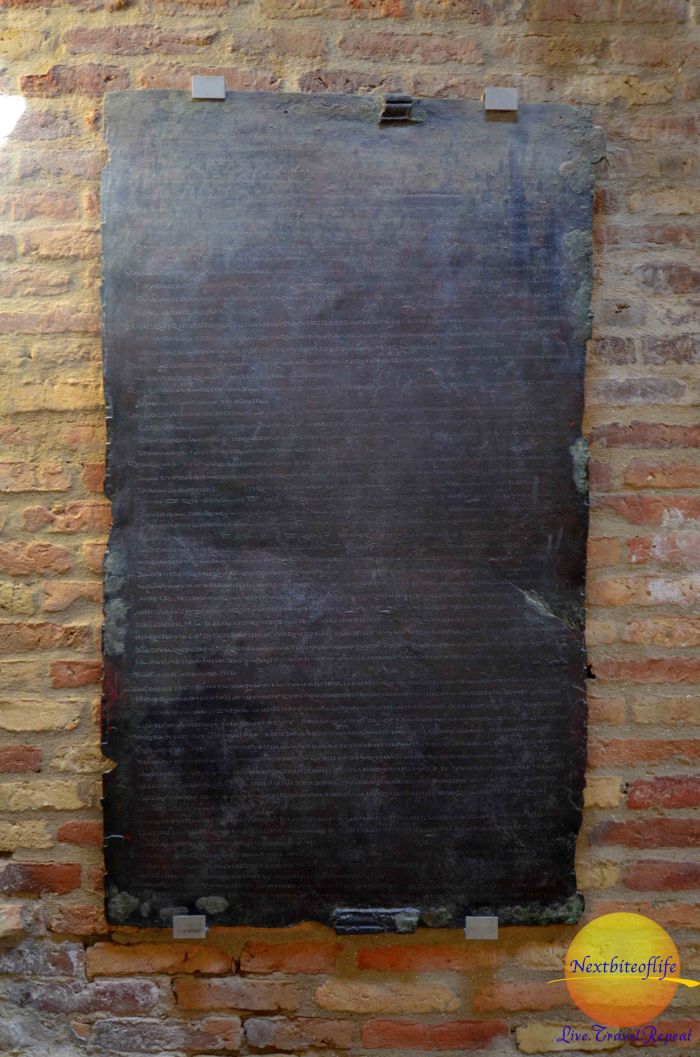 One of the best Seville Spain sites it the Italica ruins – here is the Gladiator Table in all its faded glory. 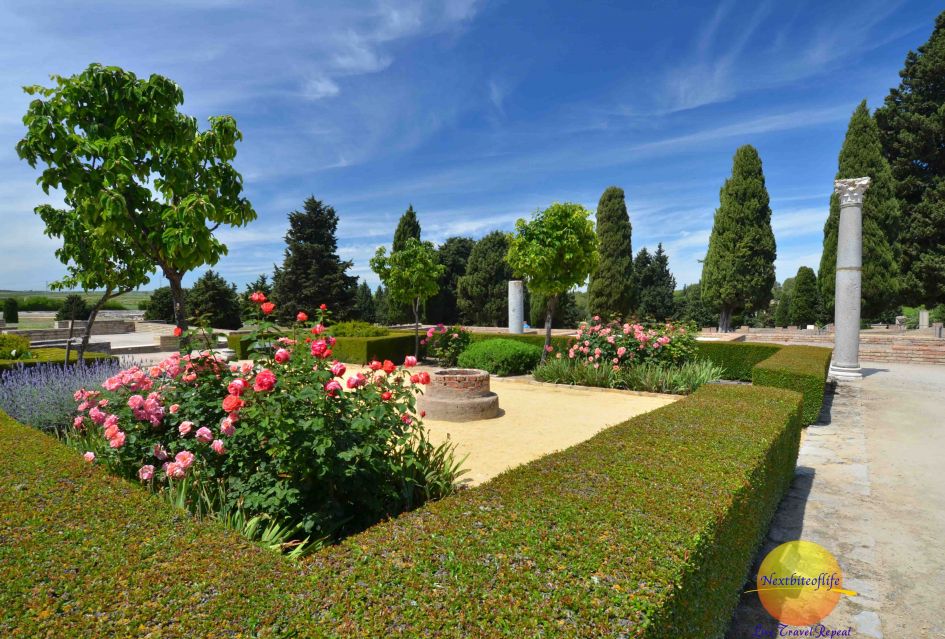 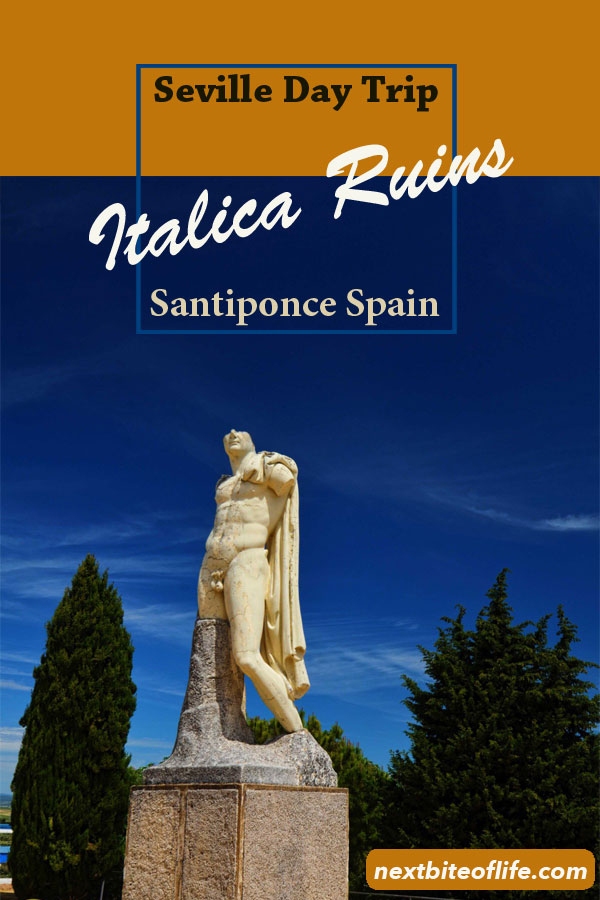 Santiponce: worth the day trip from Seville 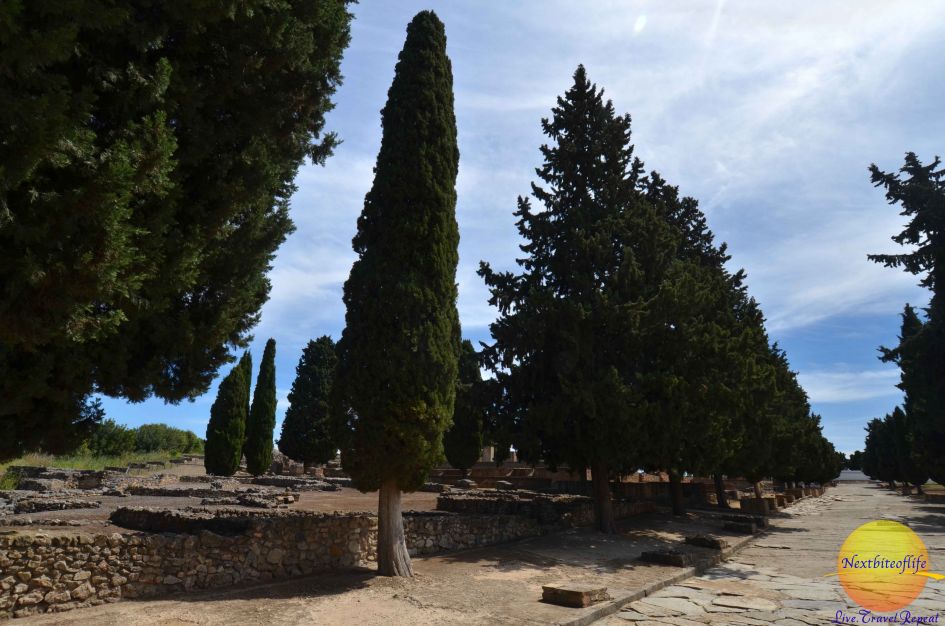 One of the best Roman sites in Spain for sure. Discovering the city of Italica. 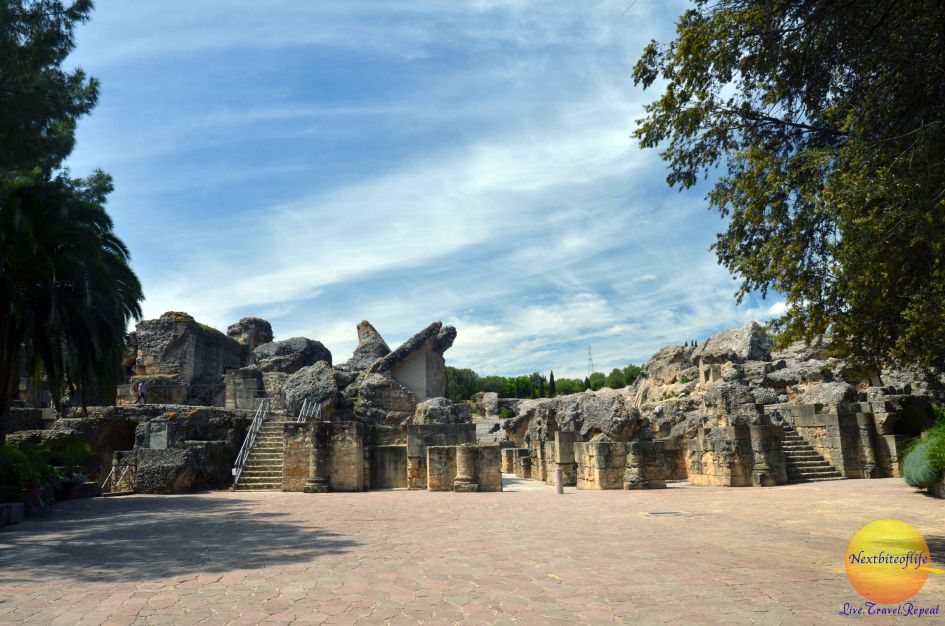 Entrance to the Italica amphitheater, one of the best tourist sites in Seville Spain

The Monastery San Isidoro del Campo is about a mile away from the Italica ruins and should be combined as a day trip from Seville. 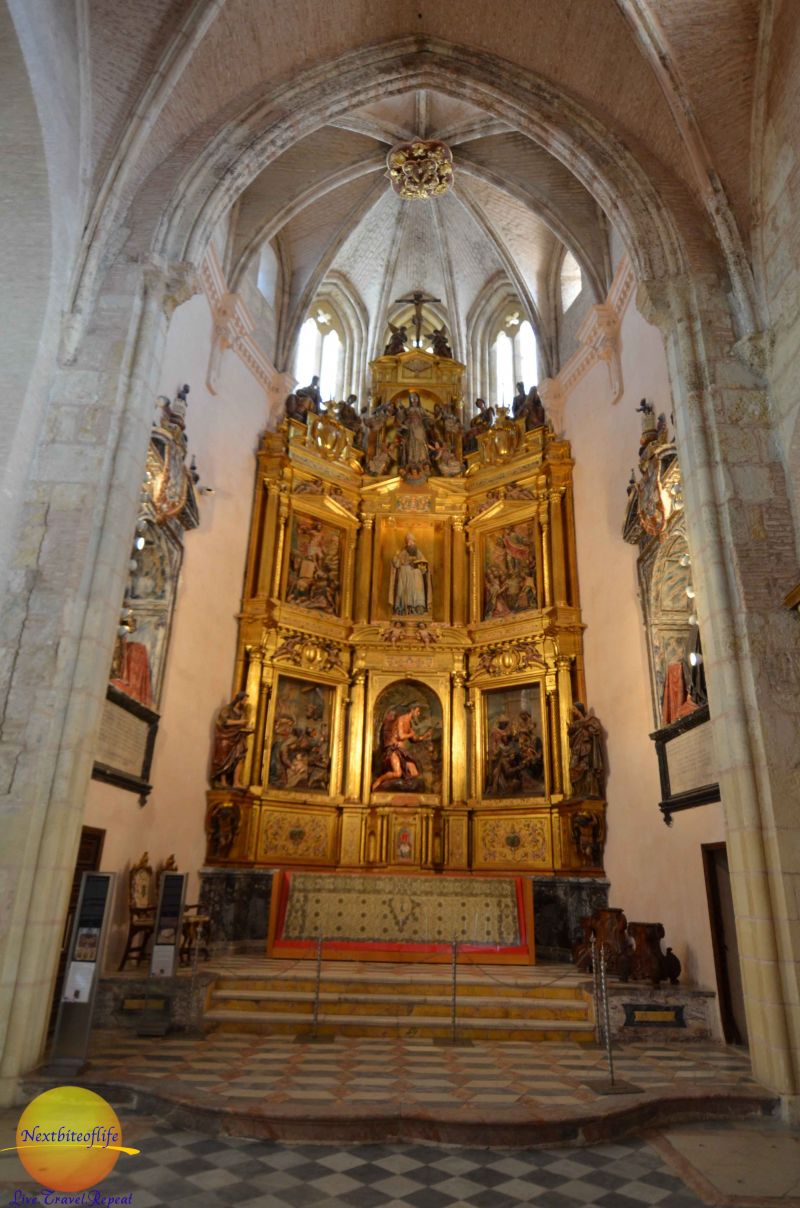 Visita Sevilla – just a short distance from the Santiponce italica ruins, one should make a day trip from Seville. 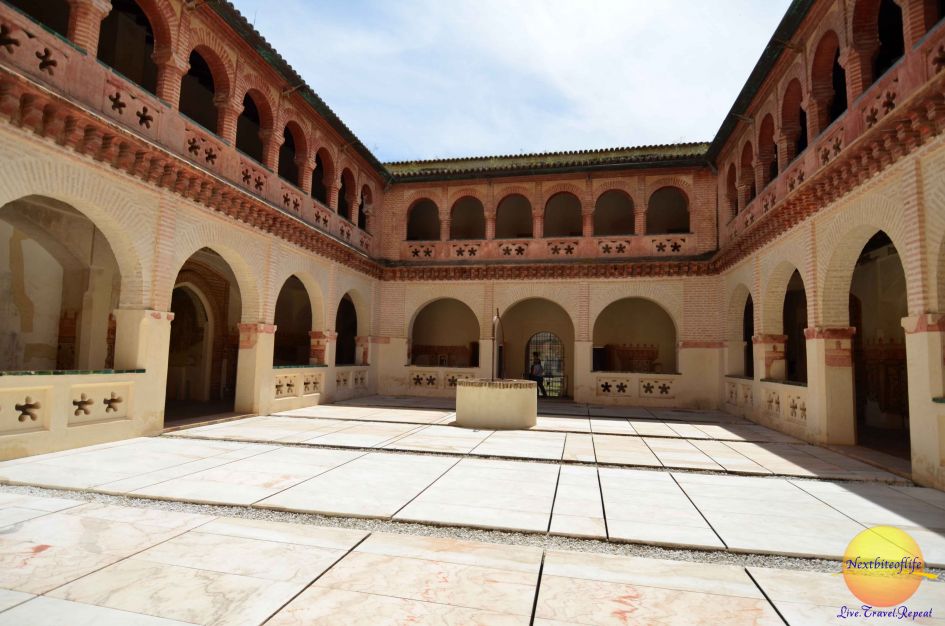 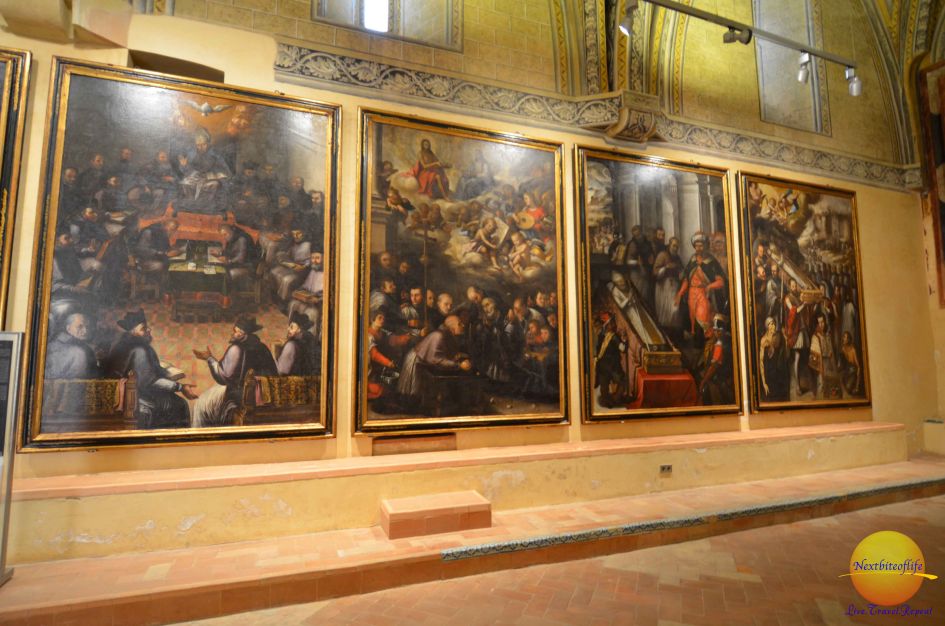 San Isidoro del campo – many religious paintings can be found in this small but chock full of history monastery. 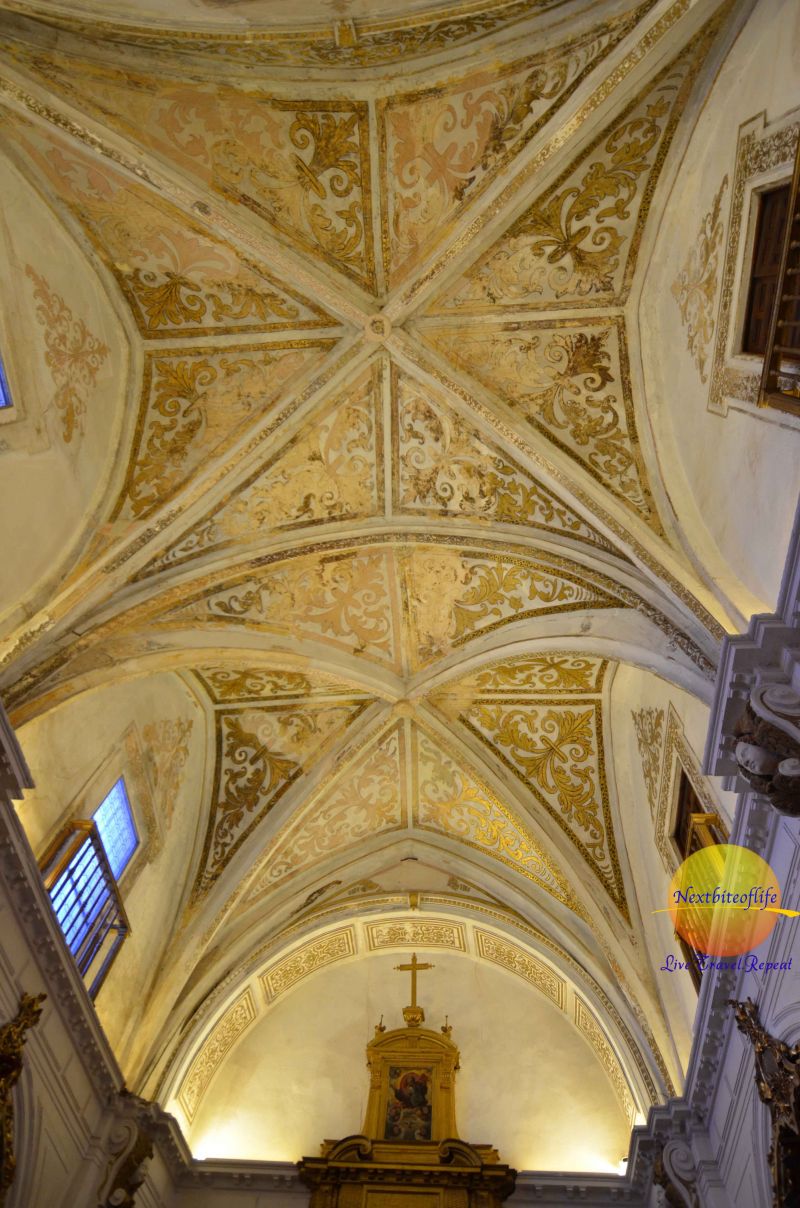 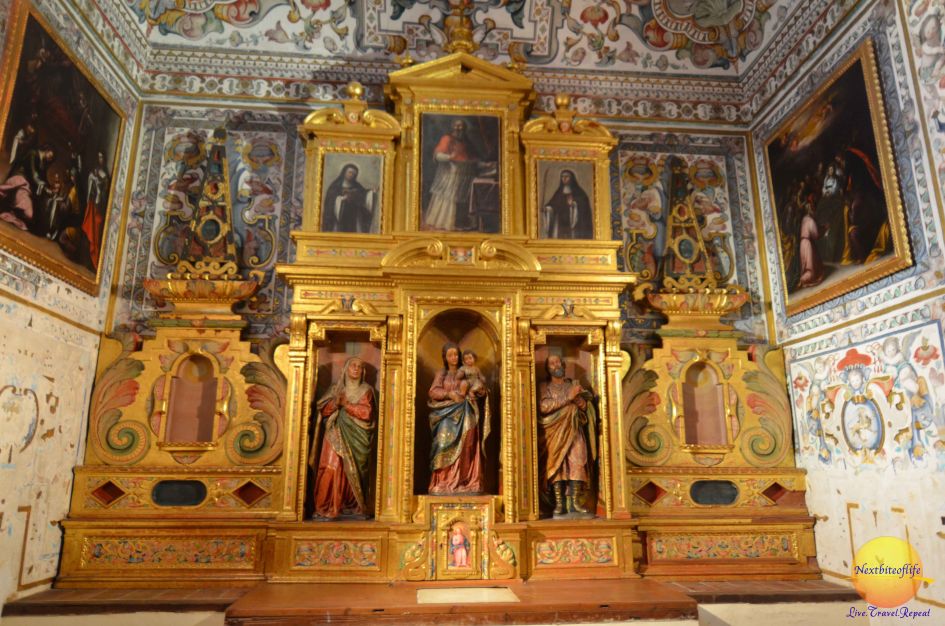 The monastery owned numerous properties, including the town of Santiponce (old town with the ruins). There is ongoing restoration, and some of the parts are closed to the public still after 12 years. It is free entry and is closed on Mondays. 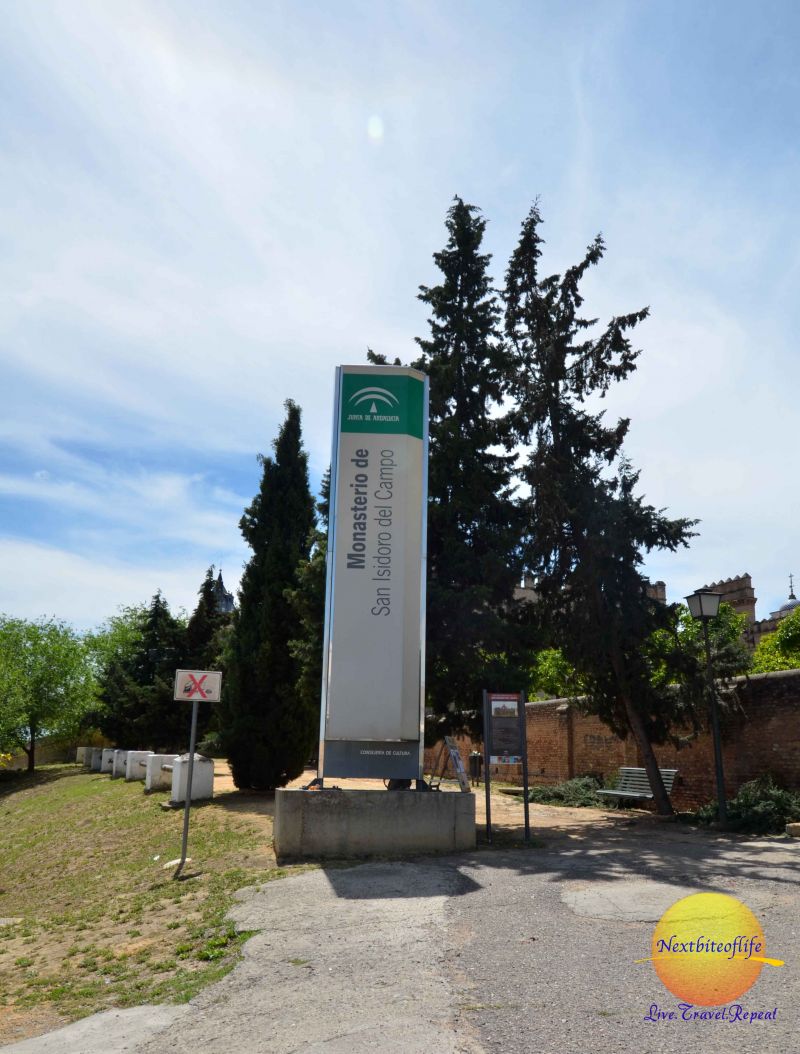 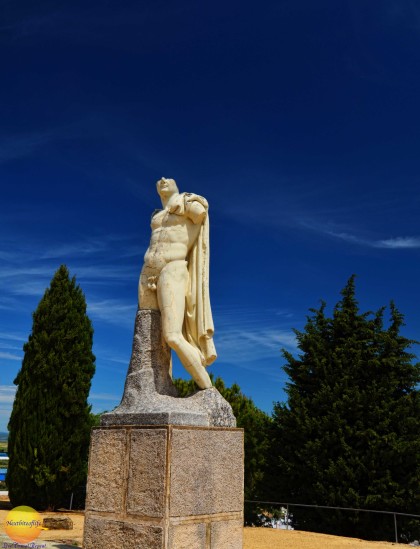 Roman Emperor Hadrian who was born in Santiponce, Seville. 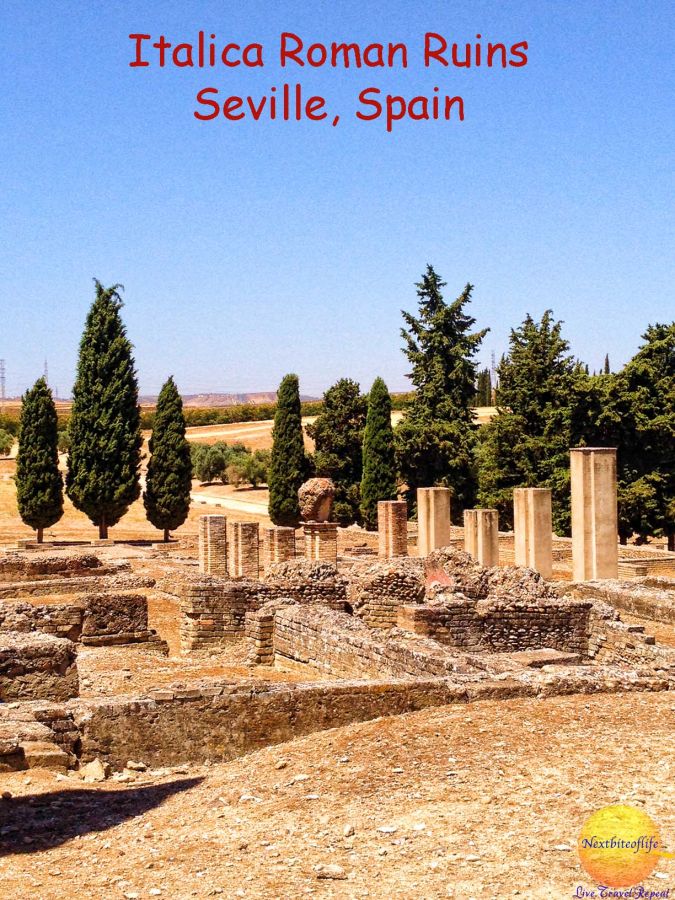 What do you think of Seville’s version of the Colosseum? Am l tempting you to consider visiting Andalusia?  Spain is not just about Barcelona and Madrid you know? :-)