Carmona – Fortress of the Gate of Seville 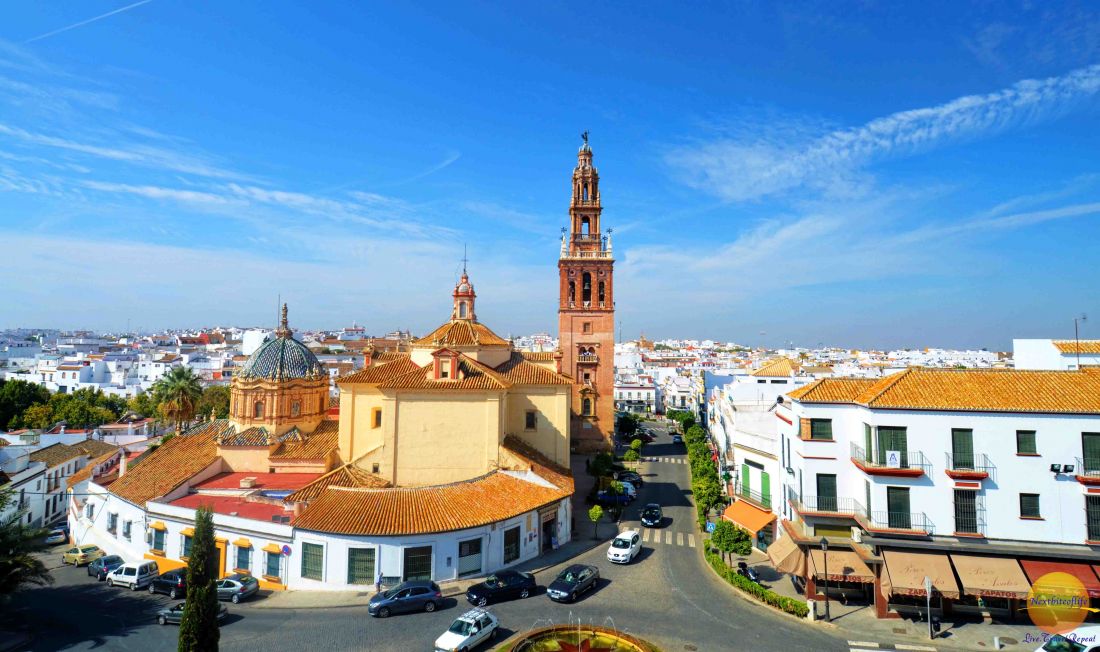 Carmona Fortress is located in a beautiful town about 25 miles east of Seville. We decided to go for a little ride over the weekend to check out this picturesque little place with a population that numbers about 30,000. It used to be one of the most important places during the Roman times. Find out why it makes for a great day trip from Seville.

Carmona was called Carmo, during the reign of Julius Caesar. Carmona produces lots of olive oil, wine and cattle. It is built on a ridge and has views of the plains or Andalusia, one of the famous white villages dotted around the region.  If you closed your eyes, you would totally believe you were transported to Greece with all its quaint whitewashed landscapes.

Carmona was allowed to become a city in 1630 by Phillip IV in exchange for some money, 40,000 ducats.

The city of Carmona declined rapidly at the end of the third century as people moved away and abandoned property and it got pretty much forgotten until the eight century when the Muslims ruled Andalusia, and at one point was a capital of one of the Taifa muslim kingdoms.

What does Carmona mean?

The name Carmona is thought to have been derived from the Semitic words, Kar which means city and Hammon, the sun-god that was worshipped in Carthage,  so it evolved to Kar-Hammon  (the “city of Hammon). The city became  an important Carthaginian trading city. 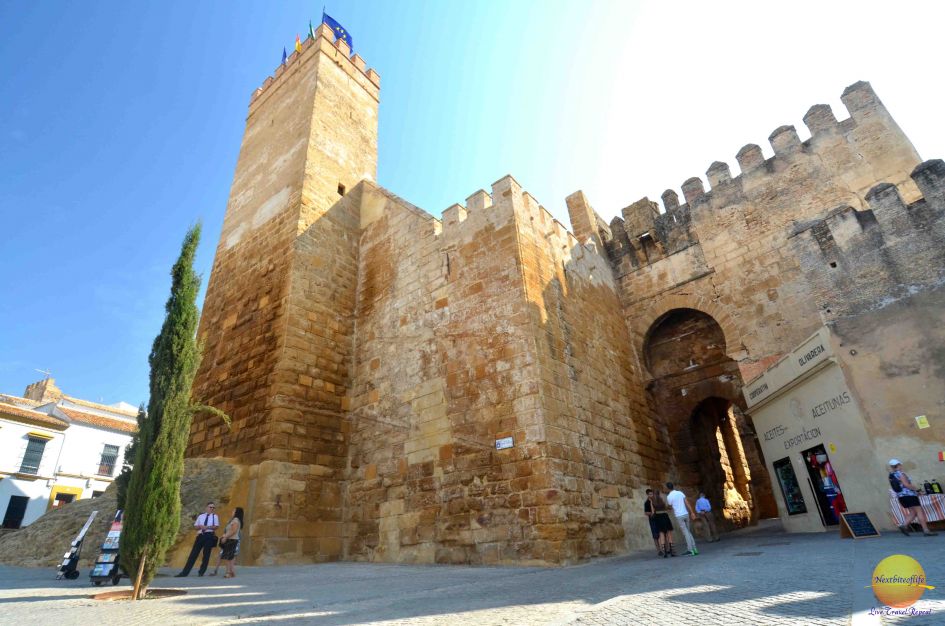 You will fall in love with this town right away. It looks exactly like you picture when you think of a typical Spanish town. As you drive into the centre, the first thing you see in front of you is the Alcazar de la puerta de Sevilla. The walls of the gate were built in the 3rd century by the Carthaginians (Greeks). The Romans, however, were the ones who reinforced the tower with gates.

The fortification made Carmona the strongest and safest locality during the Roman times. This gate is three meters wide and the streets are cobblestone. It is so quite stunning. Fernando III conquered Carmona from the Moors in 1247. The town used to house a lot of convents and palaces. One of the old palaces, originally built by Pedro the Cruel, has been converted to a Carmona five-star hotel called the Parador Carmona, and it sits on the highest point of the bluff. 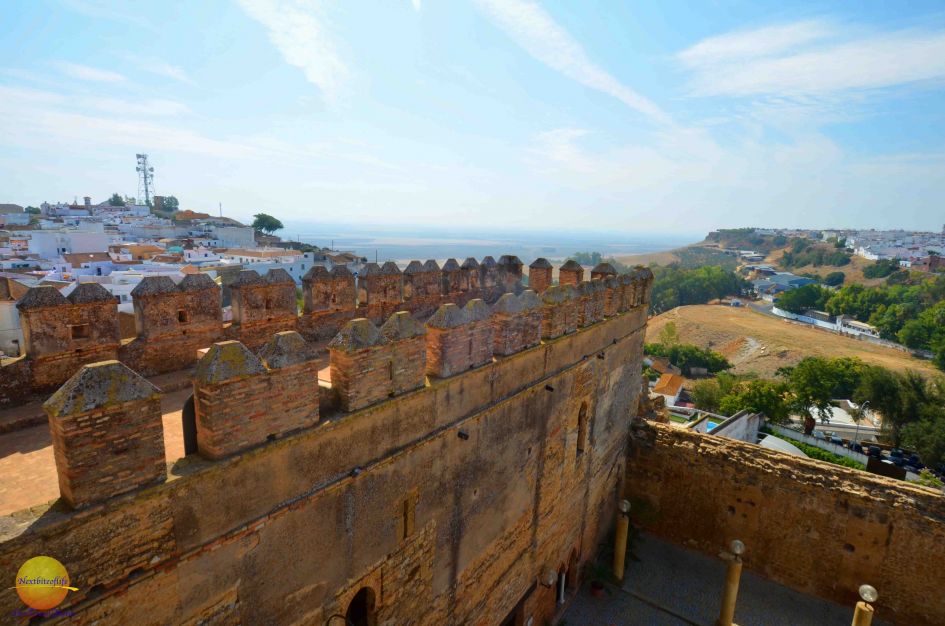 This is the view from the upper floor of the parador Carmona fortress.

Protect your trip with travel insurance

Just before the Puerta de Seville is the stunning church of San Pedro. It’s hard to miss because the handiwork and colors of the tiles used are just so pretty. It has a tower that looks similar to the Giralda in Seville, and is fifty-six meters high. Truthfully, l like this one in Carmona much better, mainly because of the more colorful tiles used .

The construction of the church was started in the 15th century, but was finished in the 18th century. When you think about Gaudi, and the Sagrada Familia, you realize that even though it’s going to be a while until it is completed, that time frame is still teensy weensy when compared to how long the churches took to build in the past. This one took 3 centuries!!!! A ton of masons and architects never saw their work completed.

The church has a chapel that is considered one of the best Baroque chapels in the Province of Seville. We did not go in the church. There was a huge wedding going on, and they had 3 huge bus loads of guests and quite the commotion,  so we decided to save it for another day. I would very much like to see the church, as l am fascinated by them. If you are too, you might consider reading The Pillars of the earth. 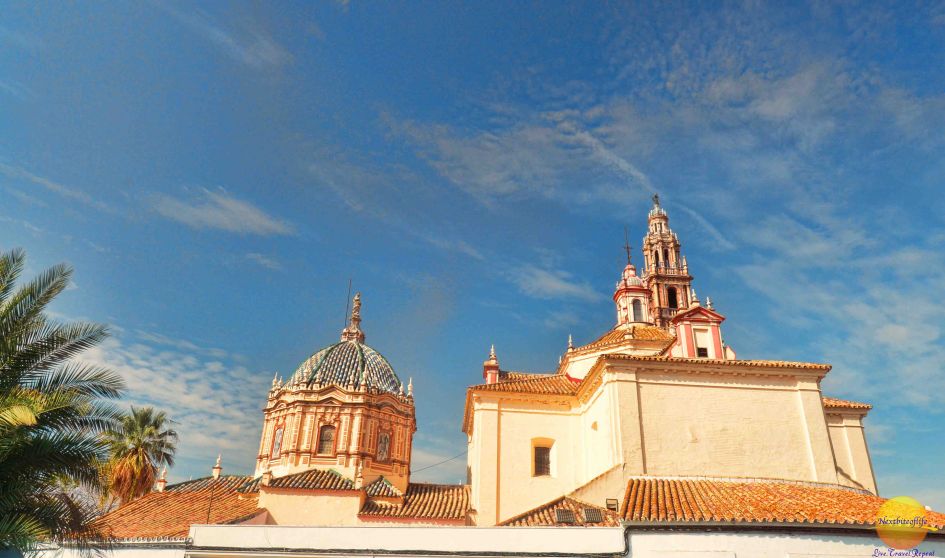 Check out the intricate details of the dome and tower. It’s almost easy to become jaded in Spain thanks to the huge amount of amazing works like this, all left over from the Moors and Romans.

We went in to tour the Alcazar Fortress of the Gate of Seville. It is a self guided tour. I enjoyed seeing how they defended themselves in those days. There used to be a moat, which is of course dry now. When you go up the stairs, you come to an open space which is described as a “mousetrap”. It basically leaves the attackers at the mercy of the soldiers above as there is no place to hide from the shower of arrows or whatever is being thrown at you, including the old standby of boiling liquid :-) . For sure, that would send me running back from whence l came! 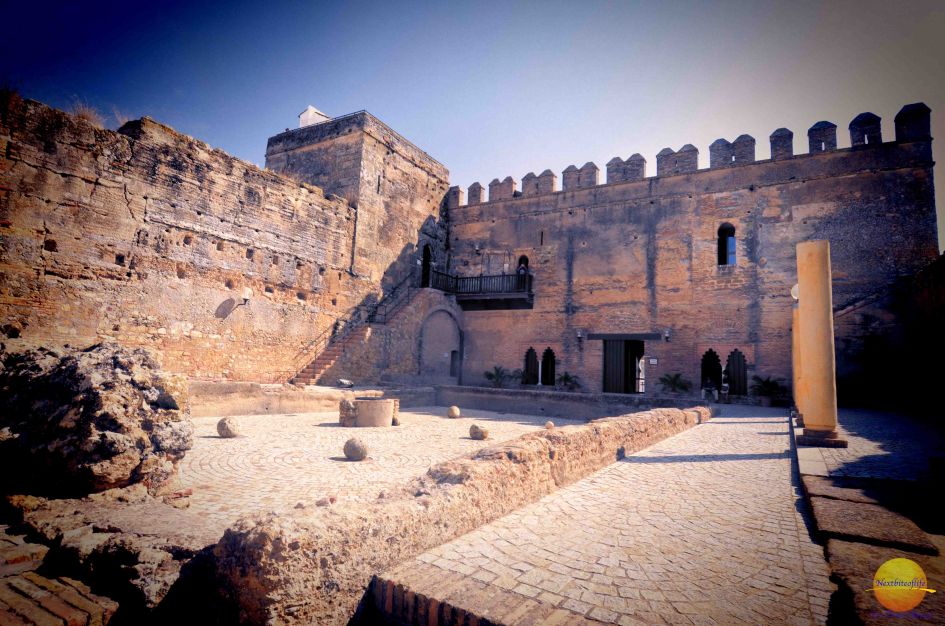 Patio of Cisterns at Carmona fortress. You can see the remains of the Roman temple.

Click here to find your hotel in Carmona Spain 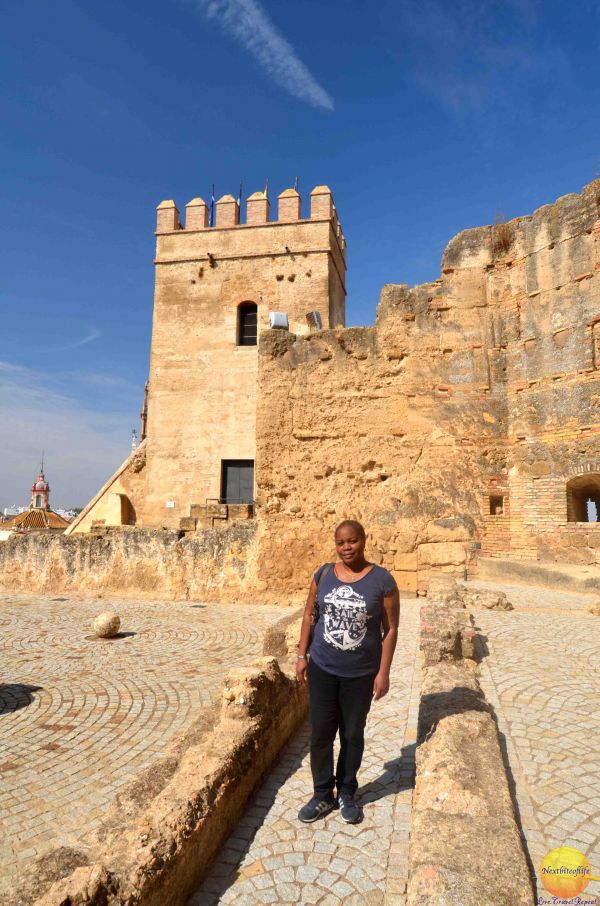 Carmona fortress is an excellent day trip from Seville 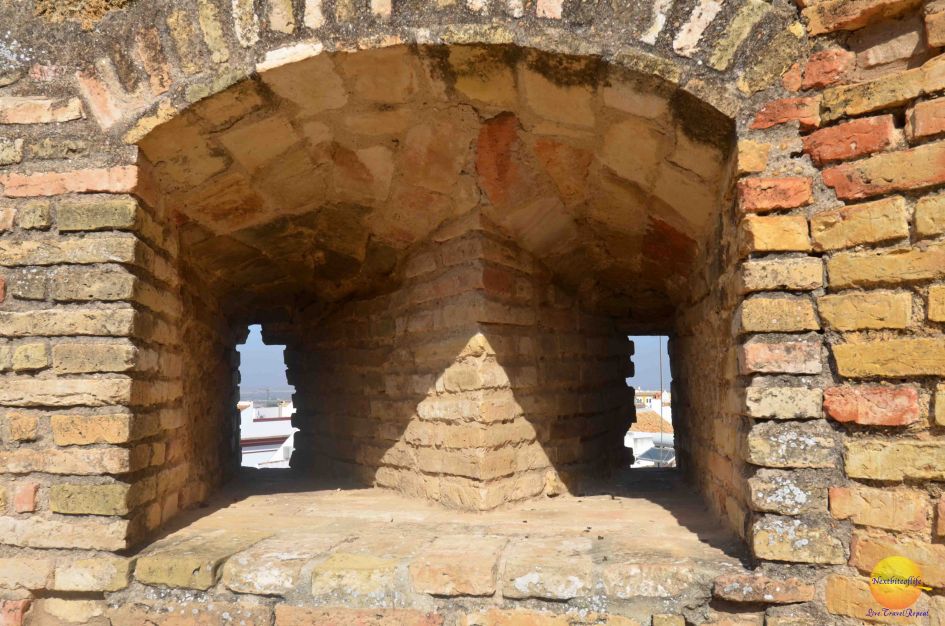 What to do in Seville – take a day trip to Carmona and visit the Carmona fortress. From the windows, they can shoot arrows down to the invaders and because of the design, they can’t really shoot back.

There is a patio of Cisterns in the lower section of the fortress. In the Roman times, there was a temple. The base of the building was known as a podium, and some of the remains are preserved next to the tower. During the Muslim rule, there was a seven meters deep cistern which was designed to collect the rainwater. 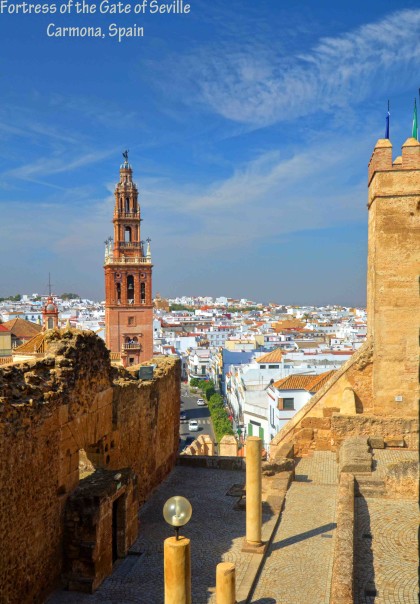 View from the “prison” at the fortress Carmona :-)

One of the most interesting rooms to me was the Lower Prisoners Hall. This had a dual purpose. It was used as a residence of governors and other important members of society. It was also used as a prison for the rich, upper class men and women. The views from the mudejar style windows are just fantastic. It makes you feel that being in jail might not be so bad.

There is an Upper Prisoners Hall upstairs with even more amazing views. This room is currently used to display relics  from the Roman era and a has a humongous mural called the “Banner of the Carmona Conquest”. This Prisoners hall is all that remains from the palace that used to be in the fortress. 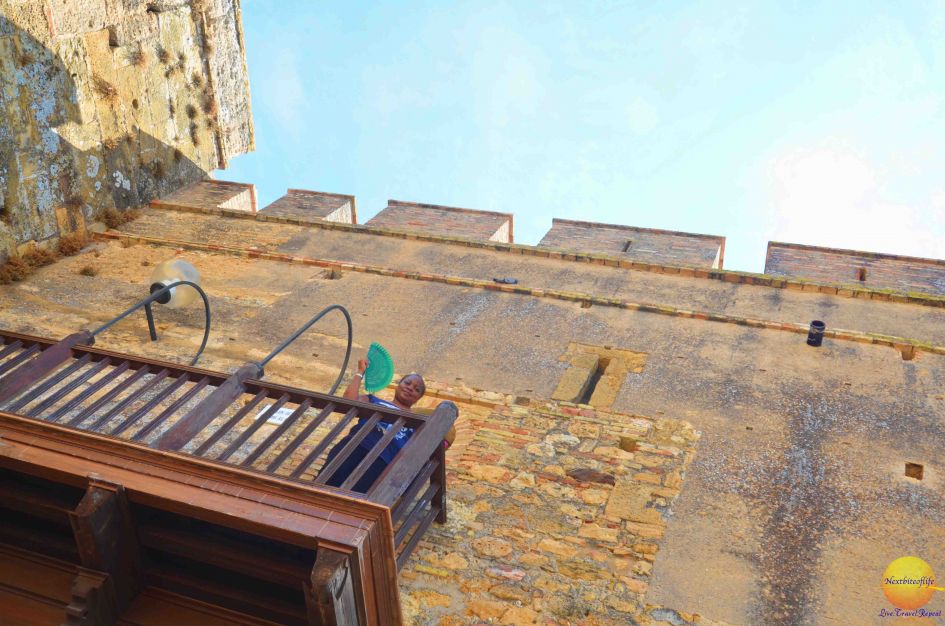 Yes, l have become one of those women that carry a fan..everywhere! :-) . I am on the balcony of the Upper Prisoners Hall. 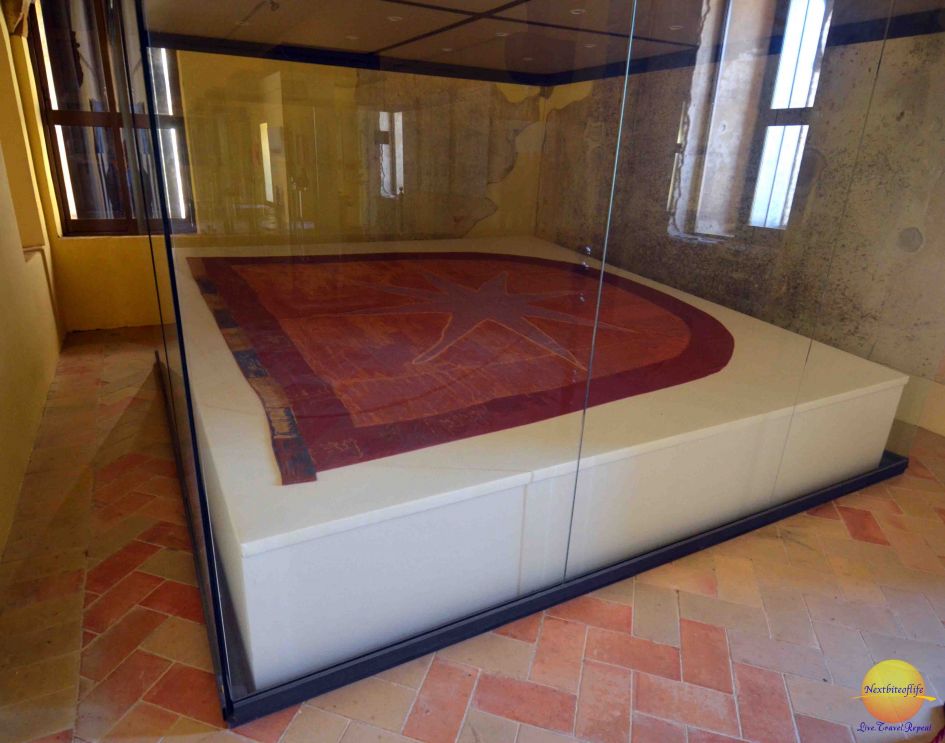 Banner of the Carmona Conquest. It is from the 15th century. The eight-pointed star in the middle is the symbol of Carmona. 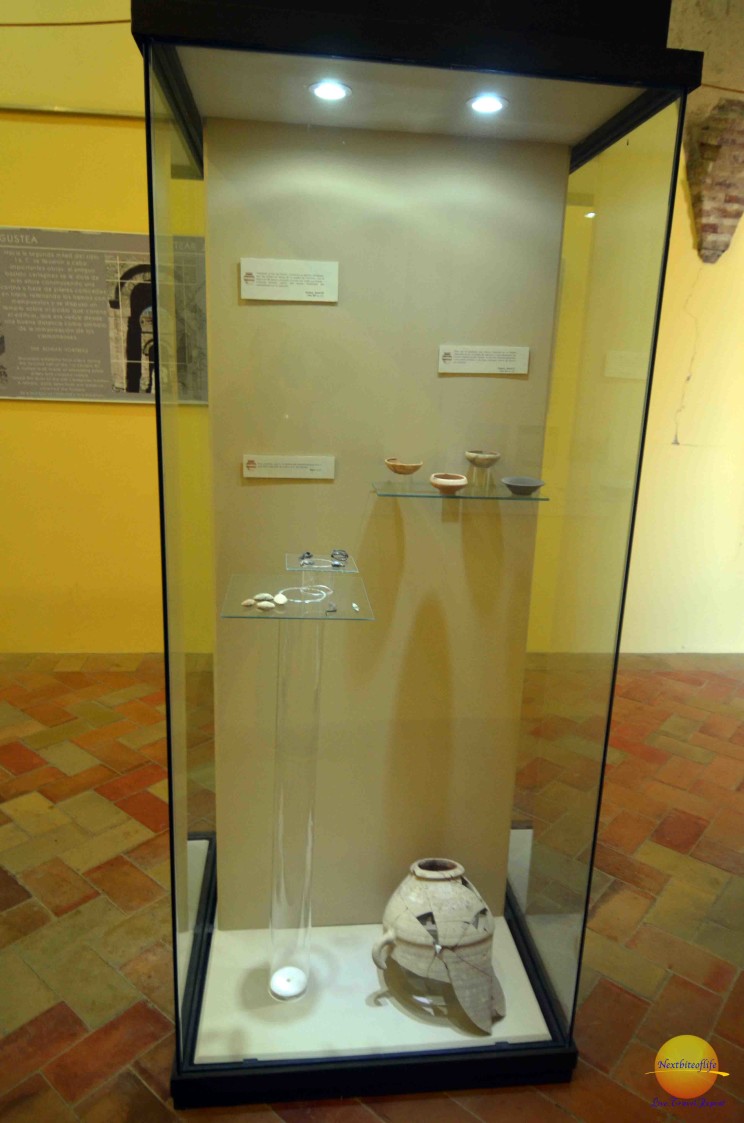 Carmona Seville should be included on your Seville itinerary. Some of the artifacts displayed in the Upper Prisoners Hall.

Tower of gold terrace at the Carmona Fortress:

Climbing up a steep set of stairs brings you to the top of the Alcazar, called the Tower of Gold Terrace. You totally understand how Carmona could have been so safe. You are so high up that you can see any invading parties coming towards the town from all sides, since it’s flat all the way to the fortress. Pretty impressive views of Carmona from the top. 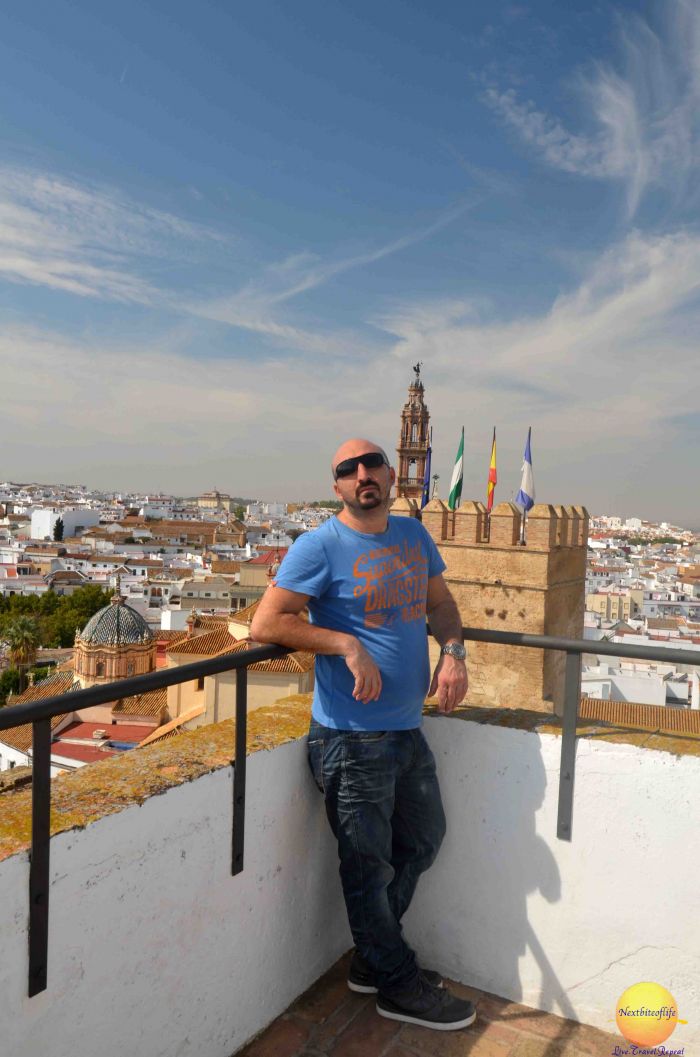 This is the view from the very top of the Carmona fortress. 360 degree view. 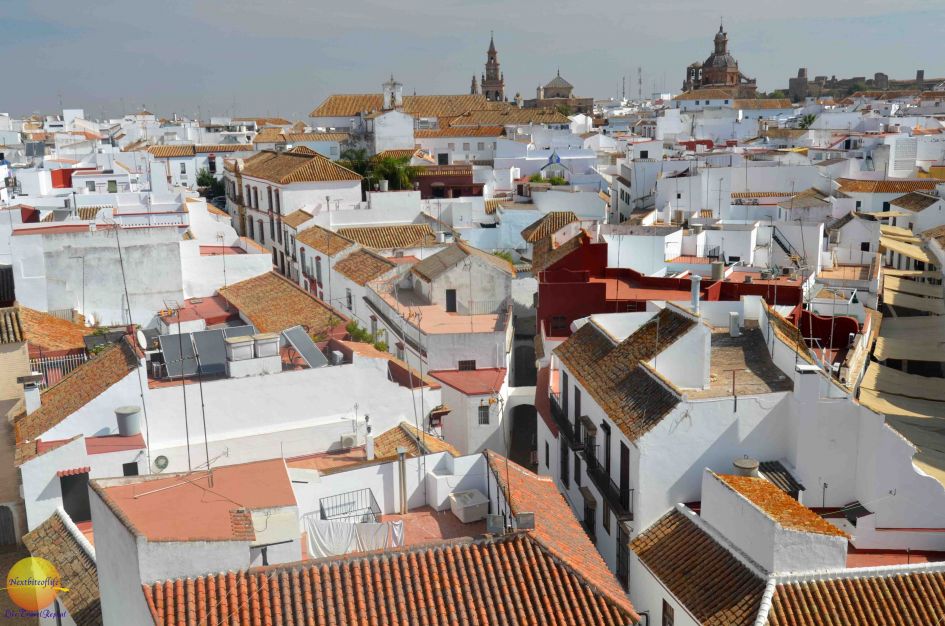 Carmona Spain – View from the top of Carmona fortress. Love the tiny little streets. You can see there are quite a few other churches.

Other things to see in Carmona:

The entry fee for the Fortress of the Gate of Seville was €2 and €1 for kids.

I think it is definitely worth the price, even if it’s just for the views alone. Carmona is also pretty cool because the town is not on everybody’s radar. It’s still kind of unspoiled  by tourism, so while you may see a bus or two, it doesn’t feel very touristy, there is plenty of time to wander and check out everything without feeling rushed. Worth it! Over fifty movies has been filmed in Carmona because most film makers find it to be an authentic take on Spain. I know l do!

Trivia: Game of Thrones filmed here during the fifth season of its run. 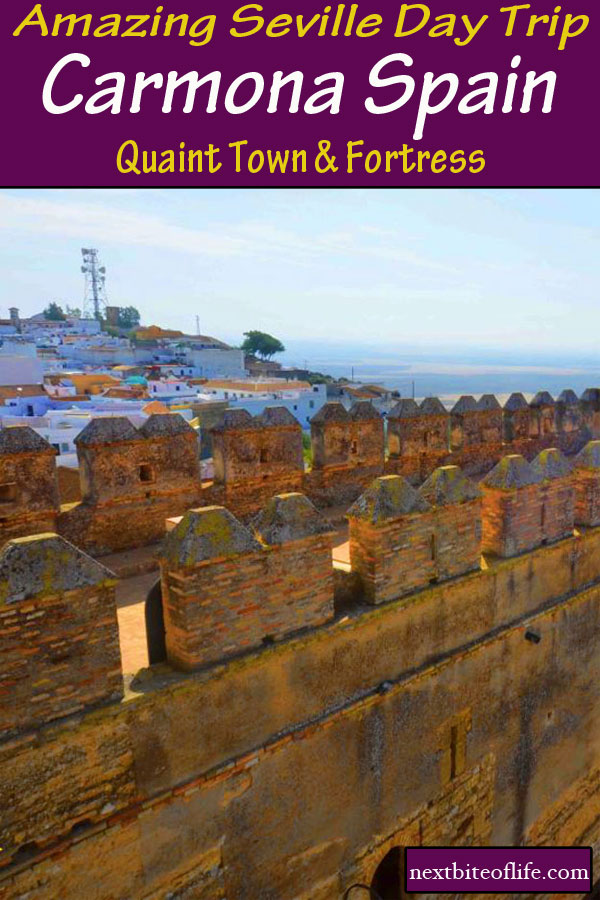 Does Carmona sound like your kind of town? slow-paced… or are you more of a Barcelona fast pace, crowded sights lover? Surely, there is room for both..no?