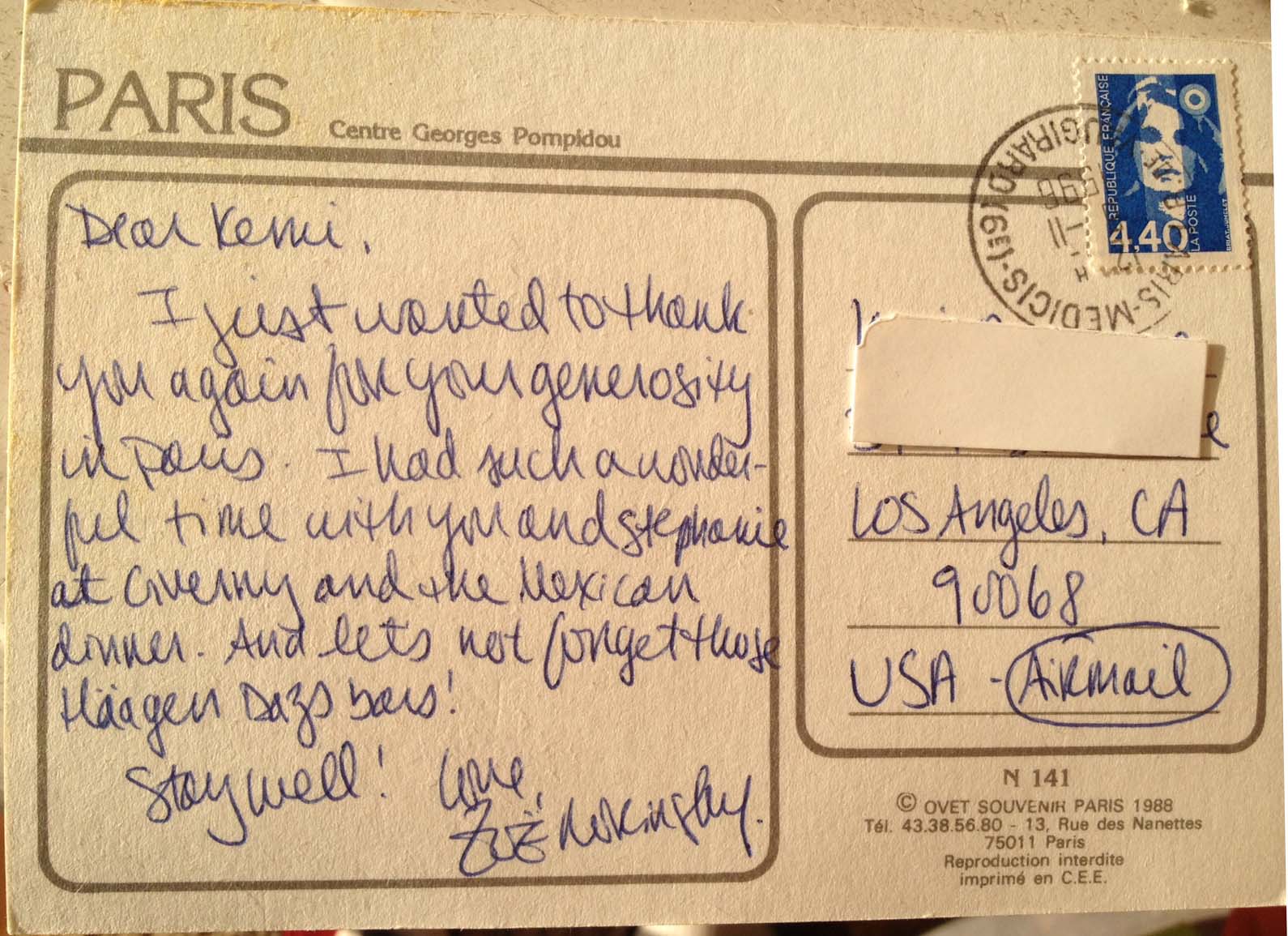 This Paris postcard was sent to me by a girl named Zoe. Looking from the date, it is from 1998. As with everything with me, there is a story behind it :-). My best friend Steph and l had gone to Paris for a little vacation. In the good old days, you just showed up at a place and then found a hotel. Unbeknown to us, there was a huge, no make that massive convention/protest (never found out what it was!) in Paris! Traffic ground to a stop kind of thing. Impossible to get a cab,  or get on the train. Maddening crowds. We were totally screwed. We ended up finding a room at this wickedly over priced hotel. If memory serves me right, the room was about the size of my thumb nail and cost us about $330 for the night! The room smelled and you had to walk on the bed to get to the minuscule bathroom. We were exhausted after our 3-4 hour search and went right to bed. 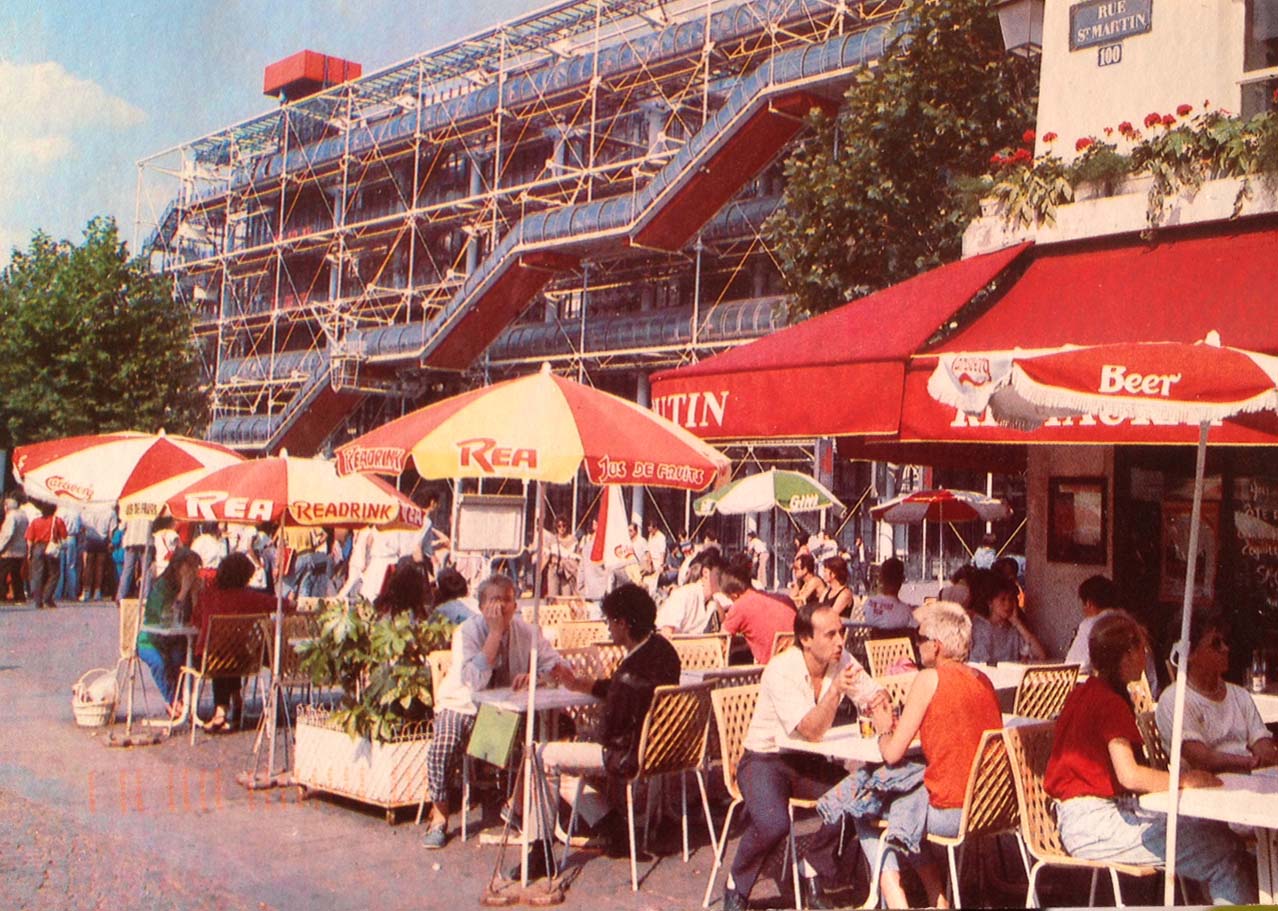 Front of the Paris postcard

The next morning, we had a horrible breakfast at the little restaurant in the hotel. Till l die, l will remember the awful smell of the waiter. He reeked of cigarettes, stale sweat and had the foulest breath. I covered my face with the menu and held my breath every time he came near. It was the most unpleasant breakfast l had ever had. We then had to walk all over the city dragging our luggage, trying to find another hotel. I totally felt like a pregnant Mary looking for a room in Bethlehem ;-). Thanks to my really awful French and persistence, we finally found a small hotel that had one cancellation and boom..we were saved. It was also a couple of hundred dollars cheaper too.

One of the sights we wanted to visit was Claude Monet’s house in Giverny. He is by far my most favorite artist of the  Impressionist era. We were just boarding the train when Zoe heard us speaking in English. She was an exchange student who had been in Paris for a few months, was missing home and very lonely. She was so relieved find English speakers. We asked if she wanted to hang with us since she was also on her way to the grand master’s house. She gratefully accepted. We had a blast in Giverny. I think we were all really emotional about seeing his home, his studio, the water lilies. All during the tour, they kept telling us not to touch anything, but as soon as the guy turned his back, l was touching Monet’s chair, his pipe..whatever was close to me. I felt terrible, but yet, couldn’t stop myself. We had the most amazing crepes next door to his house after our visit. Still the best l have ever had in my life. I had the orange marmalade. If you are a fan of Monet, you should visit his home in Giverny.

Zoe took this picture! We were in Monet’s garden in Giverny. One of the happiest days of my life.

Once back to Paris, we took her out for some Mexican food and talked long into the evening. Even with the 12-15 year age difference, we found lots to talk about. We finished off the night by getting some Haagen Daz  ice cream bars at one of the kiosks on the street. We were really happy that we were able to cheer her up because she had admittedly been feeling very depressed. She hugged us tightly when we finally had to say goodnight and goodbye because unfortunately, we had met her on our last day and we were leaving Paris the next morning. She promised to write, and she did. I found this while clearing out our storage unit. I know sometimes when one travels solo, it is normal to feel lonely.  I sometimes wonder where she is and how she is. I hope she is doing wonderfully, and speaks French like a native :-).

Do you ever reach out to strangers? any wonderful or not so wonderful experiences to share?