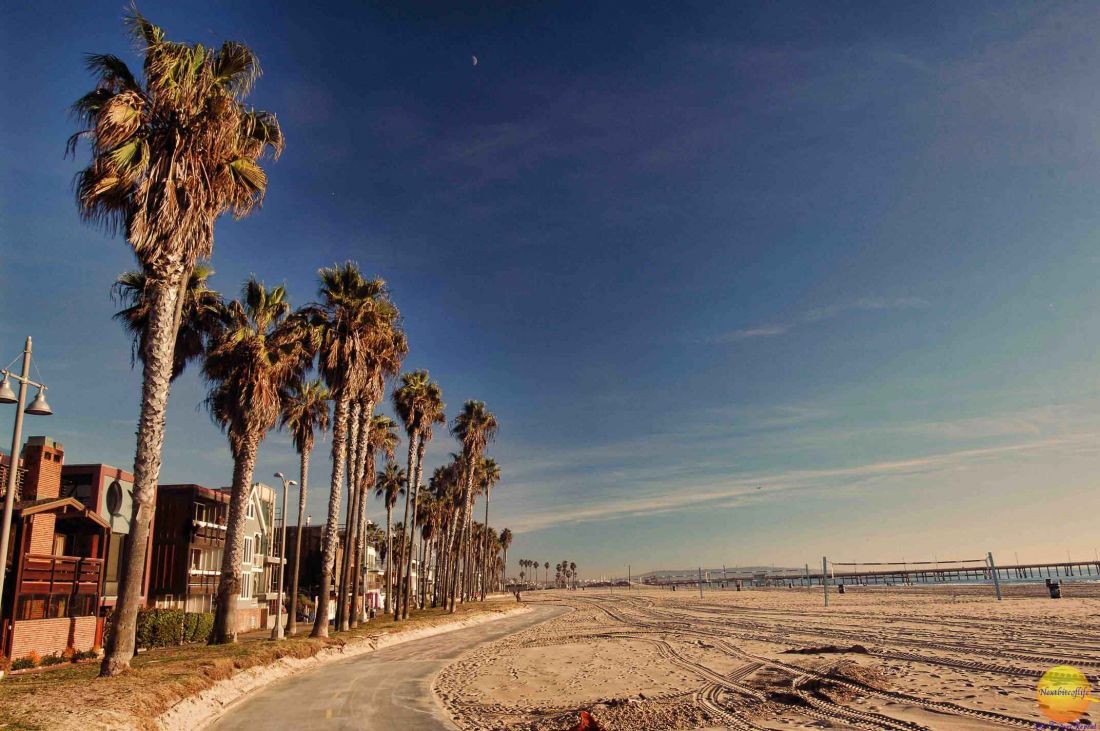 The bike bath on the Venice board walk is one of the many things to see in Los Angeles.

Los Angeles – our recent visit had me reminiscing about various places in this metropolis. You know that saying, you can’t go home again? Well, we went back to Los Angeles, a place l called home for twenty years (minus a month :-) ) and it felt good. It wasn’t just the part of seeing old friends and people l consider family, it was also the pleasure l took in being a tourist in what was once my backyard.

Years ago, when friends would visit, l would drop them off at Universal or Venice Beach while l went to work, never fully enjoying things that Los Angeles had to offer. After a while, everywhere just becomes home, and you fail to see the beauty anymore. The traffic sucks, so a drive to the beach has you thinking if you want to deal with the 2 way or longer each way traffic. It was nice to visit at our own leisure this time. It made me appreciate Los Angeles a bit more. Here are five iconic destinations  that should be included in any L.A trip itinerary. 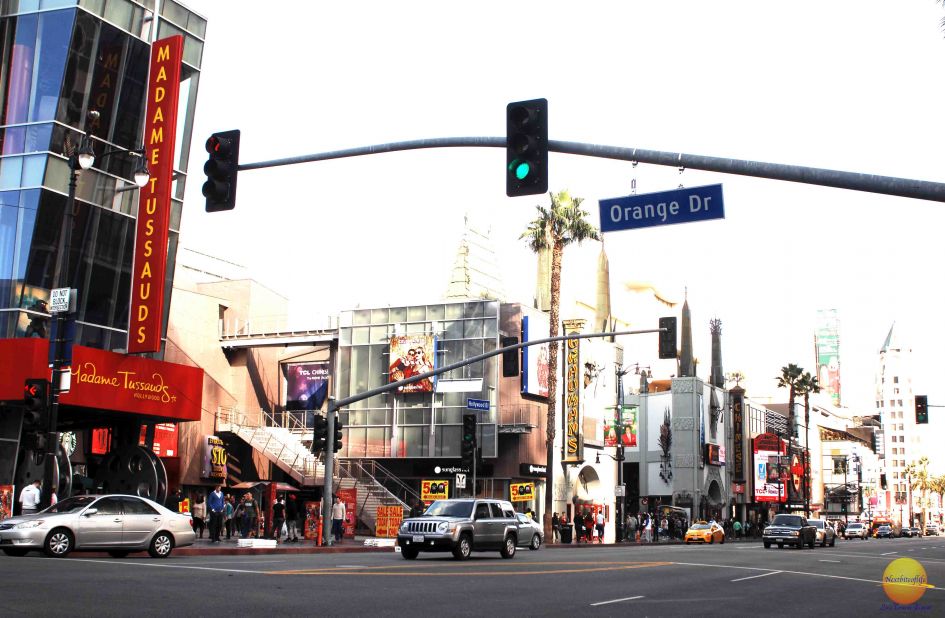 One of the Los Angeles points of interest is Hollywood Boulevard – definitely a must visit in Los Angeles. 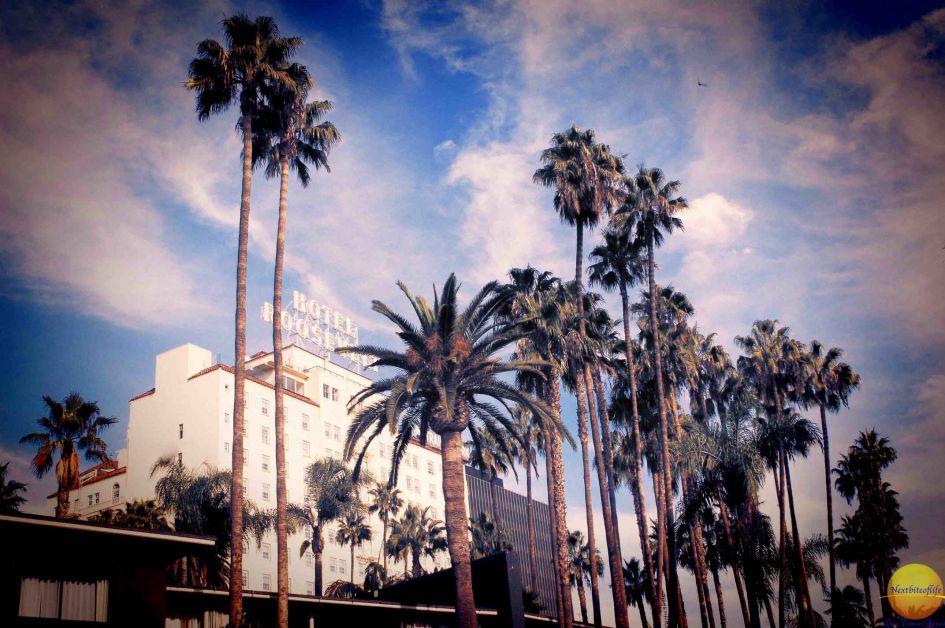 The Hollywood Roosevelt hotel. It is said to be haunted by movie star ghosts.. The whole building is full of fascinating facts of Hollywood past. I remember clubbing in the 80’s on the huge dance floor and seeing many superstar comics of the time. Think Eddie Murphy etc. :-)

No trip to Los Angeles is complete without visiting the world famous Hollywood Boulevard. I hadn’t been that way in years. The seedy, rundown boulevard that was full of tattoo parlors, tattoo parlors, crappy touristy souvenir shops and for good measure, even more tattoo parlors has now been revitalized, and is now one of the top LA attractions.

Granted, there are still a few suspect places, but it was a relief to see stores like H&M and Marshalls (sure this is a welcome sight in Hollywood, the nearest one had been in Studio City or West L.A !). The Hollywood Wax museum has been moved closer to the Mann’s Chinese theater. This would make for a nice day out in Hollywood.

You could check out the various wax figures, maybe see a movie at the theater which is quite big inside with red velvet curtains. This is just one of the many fun Los Angeles things to do and see and one l never get tired of experiencing. 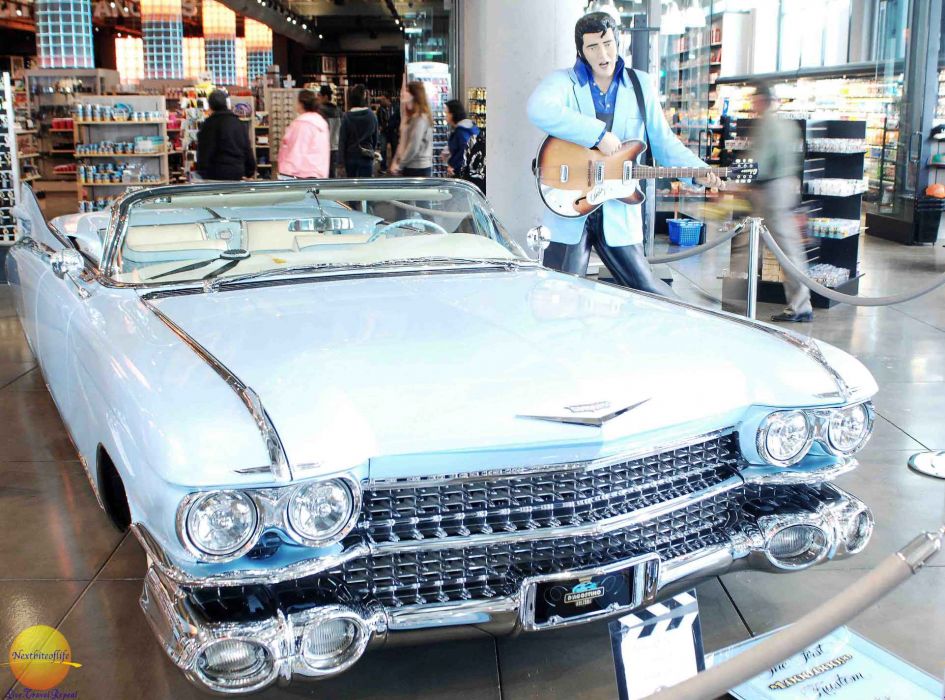 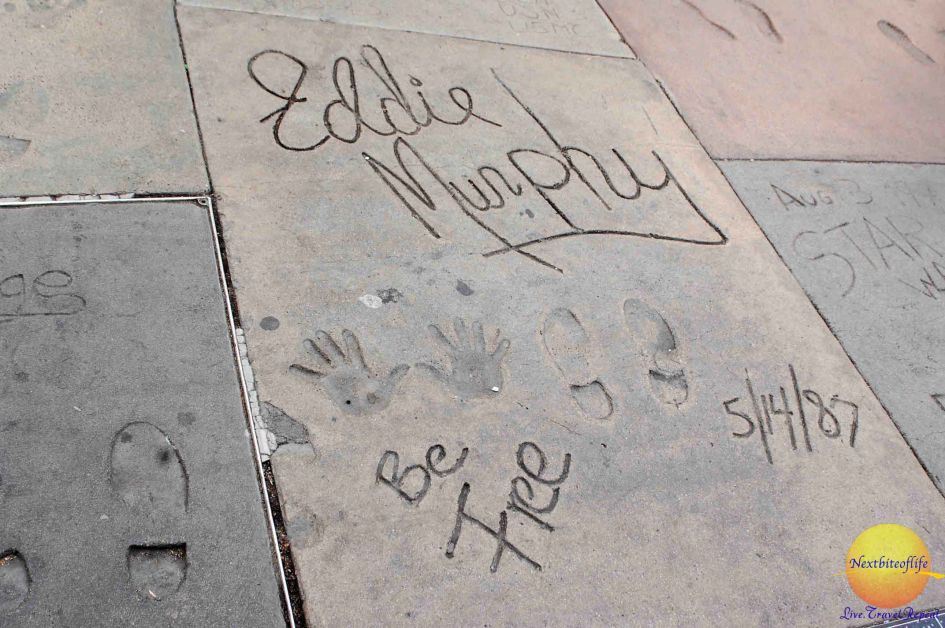 What to do on an L.A trip? Visit Hollywood Walk of Fame and Mann’s Chinese of course. Why do they all have small feet? 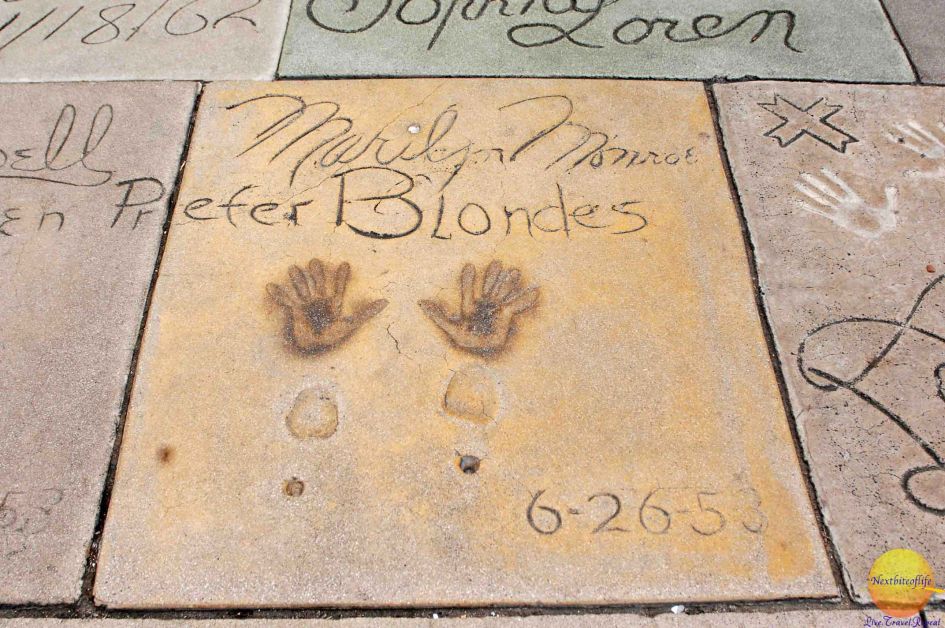 Where to go in Hollywood California? The Chinese theater. My personal favorite. I loved her, she was so good at playing dumb, but few knew she was actually a very intelligent woman.

The Kodak theater is also there. This is where the Oscar ceremony is held yearly. The Mann’s Chinese theater is a reminder of  old Hollywood, when the stars would come out for the premieres,  dressed to the nines, unlike the bums we have nowadays that attend said events in shorts and sneakers.

The foot and hand prints of big  celluloid stars can be found in the front. It’s always fun to compare sizes with the giants of film and theater. John Wayne had tiny feet, for instance. For real souvenirs, check out Cali Swag, a huge place devoted to all things Los Angeles. It reminds me of the British store at Piccadilly Circus in London. I’m sure that was an inspiration.

Hollywood Boulevard is also a great place to secure tickets to current shows that are being filmed, like Jimmy Kimmel Live which is taped across the street in an old building that l remember as a giant disco. I used to see Eddie Murphy and other stars there a lot. I was more interested in a bartender that worked there there though, a southern gentleman :-).

Venice Beach: A must see highlight of Los Angeles 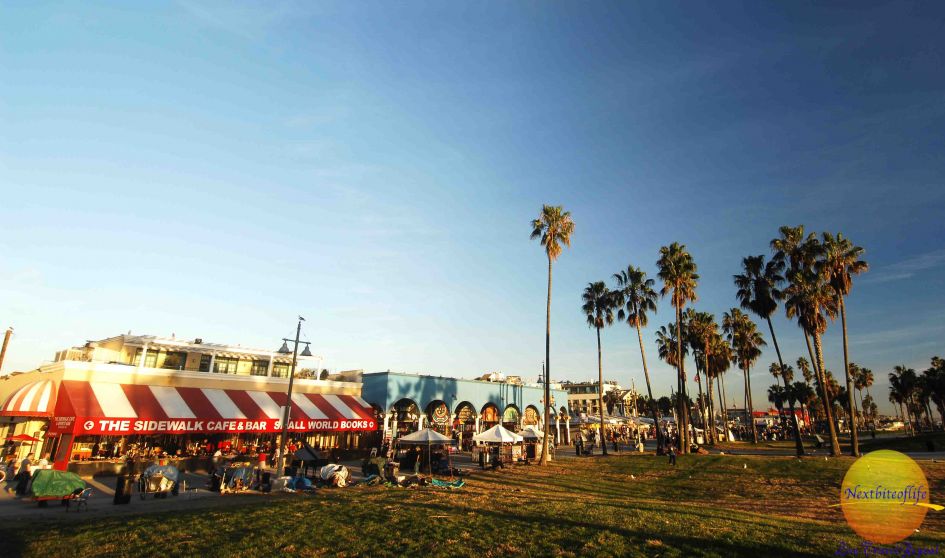 One of the top fun places to go in Los Angeles. Relax..just people watch. You will not get bored. I always loved watching the muscle men exercising at the open air gym.

What was once a resort town has now evolved into a destination for millions of people yearly. It is at once a residential and commercial area. The board walk is perhaps what it is most famous for. Here you can mingle with people from all walks of life and catch shows from performers.

Everything from snake charmers to tarot card readers to muscle men at the outdoor gym to the guy who roller skates while playing guitar and wearing a turban. He has actually become a mini celebrity of sorts, complete with a music album or two. I have no picture of him as l was not willing to pay, but l remember him from when l first moved to Los Angeles..in 1988!!! He looks the same :-). Venice Beach, just like the Venice in Italy has a few canals running through it.

In the old days, there were even gondoliers ferrying people about. That must have been cool. If you are feeling brave, you could always walk from Venice Beach all the way to the Santa Monica Pier or go the other way and walk miles to Redondo Beach and beyond (rent a bike instead :-) ). Definitely a funny place to visit in Los Angeles. 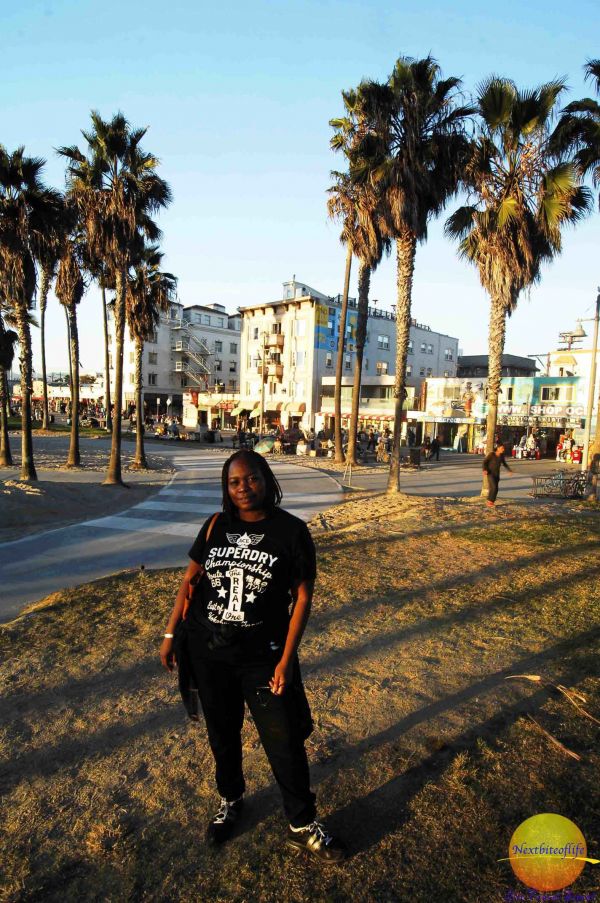 Amazing top experiences in Los Angeles include a visit to Venice Beach. I would venture to say that is probably on everyone’s list as far as the top thing to do in L. A 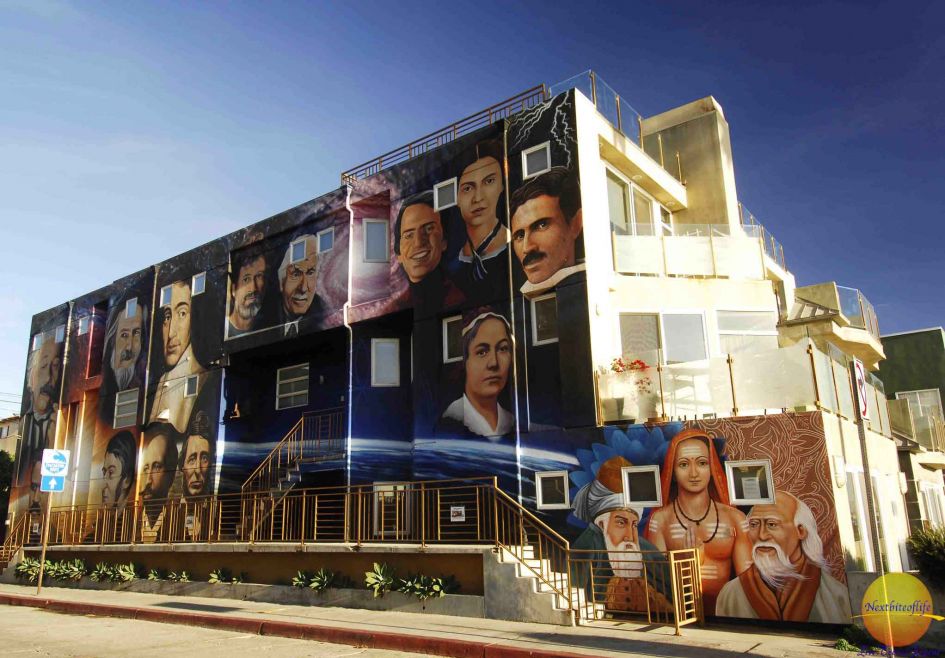 Fun things to do around Los Angeles. Beautifully detailed mural in Venice Beach. 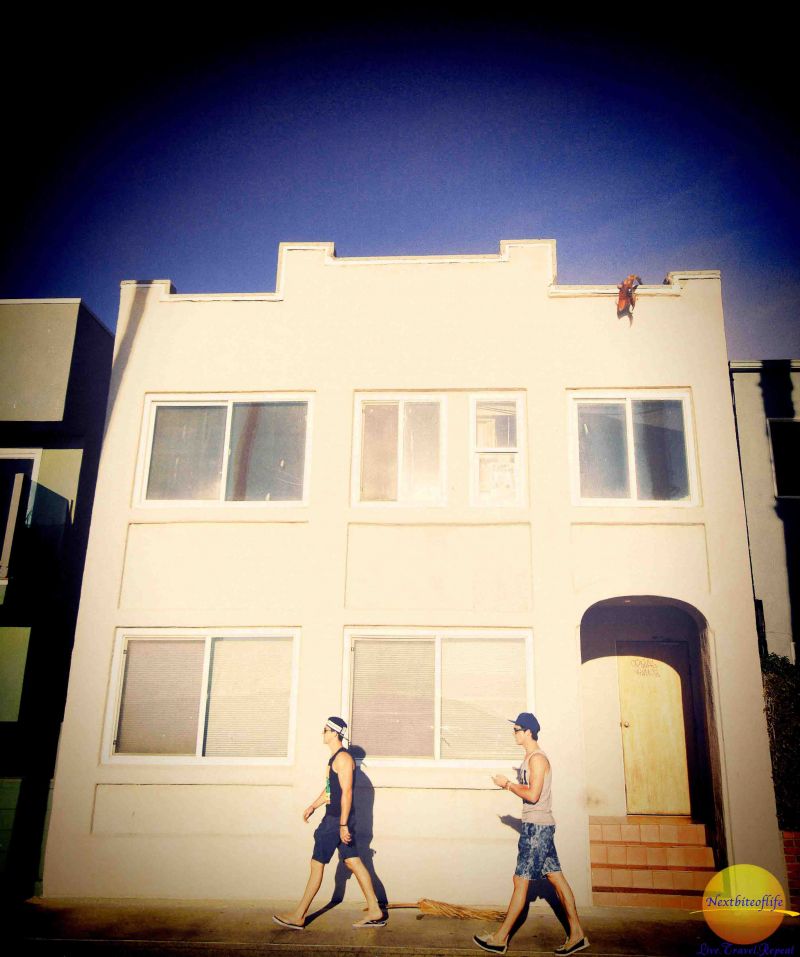 Los Angeles must see places include a visit to Venice Beach as part of your fun Los Angeles itinerary. It would be nice to have a house there..noisy yes..but the views? priceless :-) 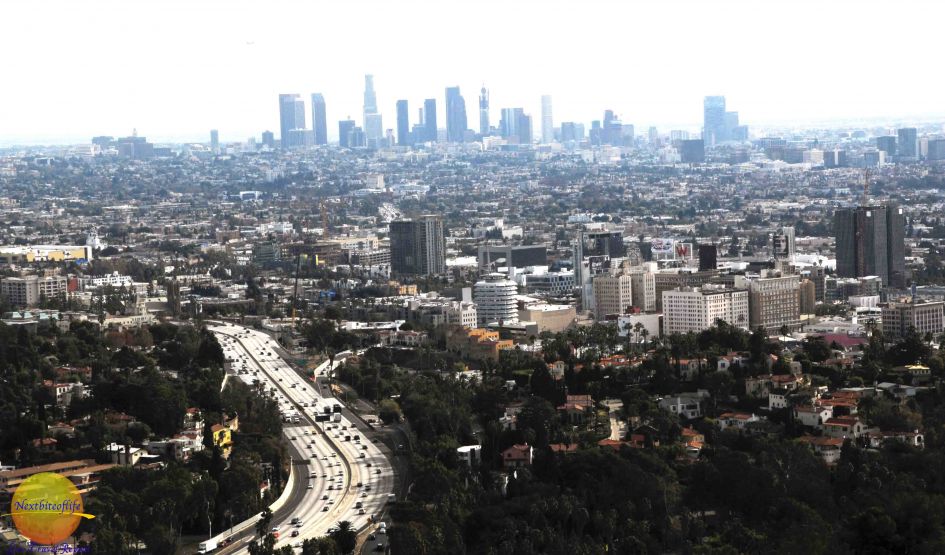 View from Mulholland Drive is a must see in Los Angeles. Wish the 101 freeway was like this all the time!! 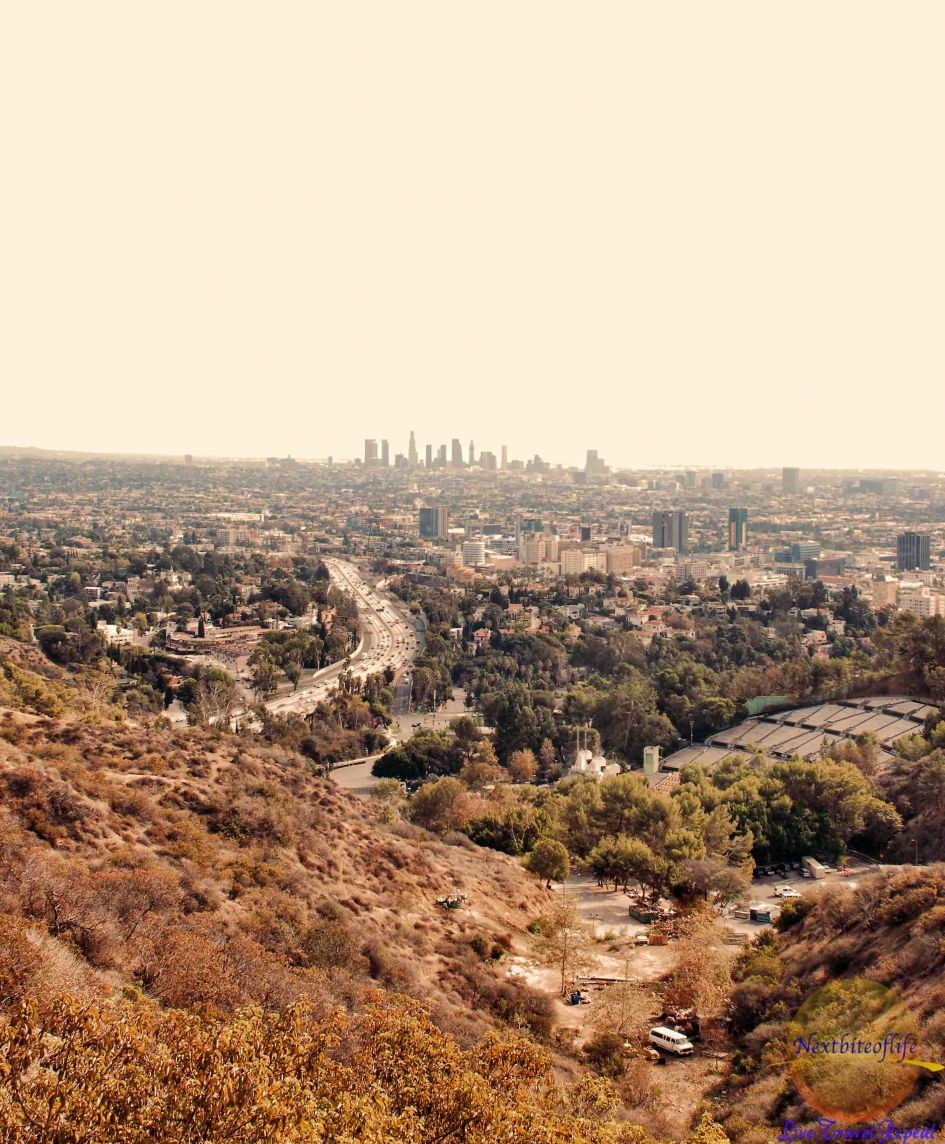 You can see the Hollywood Bowl from Mulholland Drive on the bottom right. One of the top things to do in crazy Los Angeles. It is usually packed up there.

Nothing motivated me more to succeed than seeing some of the most amazing and expensive homes every evening as l drove home from work. Gigantic, sometimes monstrous, but mostly awe inspiring testaments of success and excess dot the sides of this famous 21 mile long drive.

The road can be seen in movies like Mulholland Drive by David Lynch, it’s featured in songs and even novels. A lot of world movie stars and directors live on the drive, even though you would never know it as most houses sit far back from the road. There is a lookout in the Hollywood Hills, close to Runyon Park (another awesome place for a hike and views) from which you can get spectacular views of the Los Angeles Basin, the famous Hollywood sign and the San Fernando Valley..on a clear day of course :-). 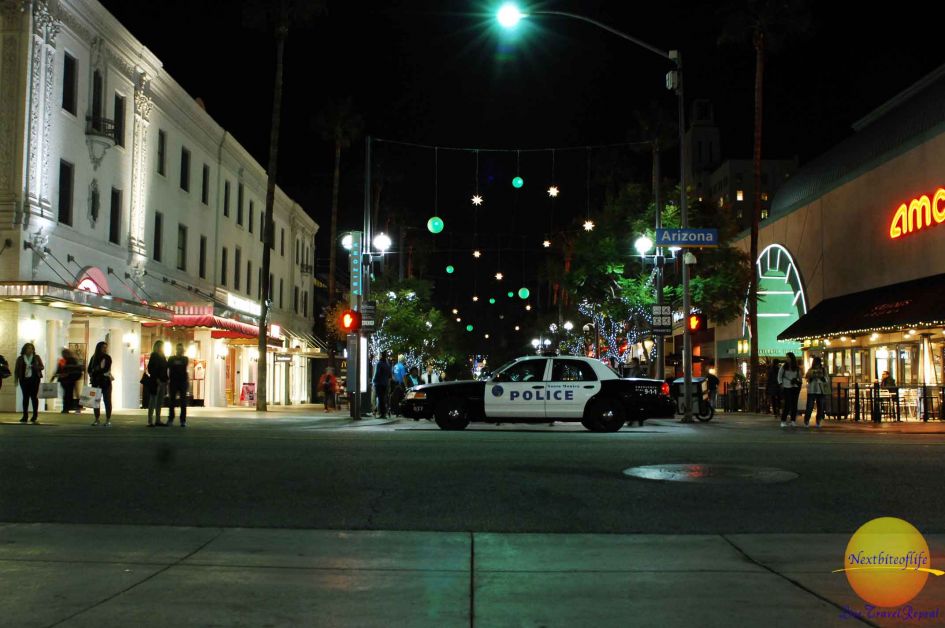 Things to do close to Los Angeles include 3rd street promenade. It was dark by the time we made our way over there to meet up with a friend..

This is one of my favourite spots in Los Angeles, (on the west side in Santa Monica) to people watch. Here is another place that has changed so much. I lived on 12th street for over 2 years so this was a popular destination for hanging out. Nowadays, there are more upscale stores including Armani, Apple store, Sephora and American Apparel. It used to be quite seedy.

I was happy to see that both the Doc Marten and the Barnes and Noble bookstore were still there. A lot of the independent places are sadly gone. I remember a very, very old bookstore there called Midnight Special that l would visit with my friend R. a journalist and we would spend hours hanging out.

There are lots of restaurants and movie houses, not to mention the shops in the mall to keep you occupied for hours in this pedestrian only zone. It is also quite close to the beach, so you can check out the Santa Monica Pier. The parking lots on 2nd street offer 2 hour free parking. 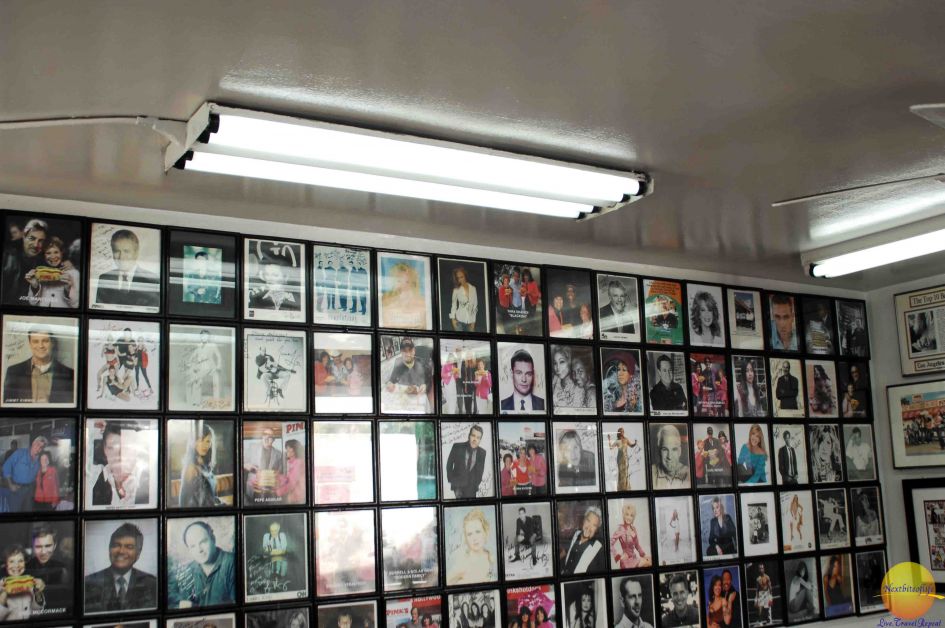 Fun local thing to do in Hollywood, Los Angeles – visit Pinks Wall of fame, just one of them at Pink’s Hot Dogs

You know l have to throw in some food :-). Pink’s is a legendary hot dog stand that has been at the same location in Los Angeles since 1939. Anyone and everyone has eaten there at some point. It is not unusual to see  a Limousine,  or Rolls Royce pull up for some chow.

Pinks is located on the corner of Melrose and La Brea, since 1939, the area in those days was known as “the country” because of its rolling hills, open spaces and tumbleweed :-). I have never deviated from my favorite hot dog, the “Guadalajara”, an oversized hot dog with relish, onions, tomatoes and sour cream. I am drooling as l write this.

Federico, somehow had never been. He said he was always put off by the long lines, but he loved it so much that he had us go back there the very next day! The walls are covered with framed pictures of old and new stars that have come in to eat. It’s said you haven’t made it in Hollywood till you have your picture on the wall :-). 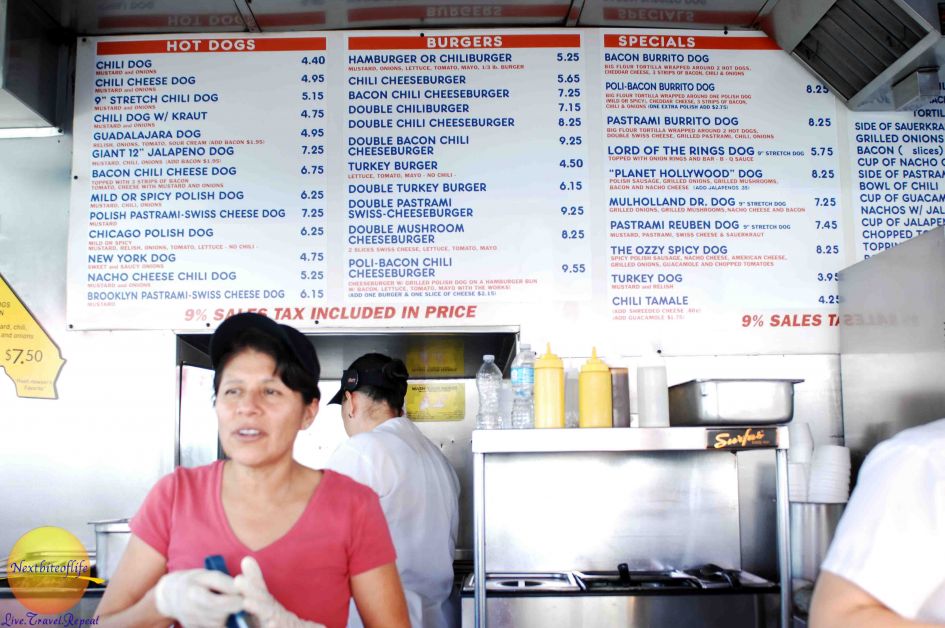 Pinks is one of the main top things to do in Los Angeles. check the menu..they all look good :-) 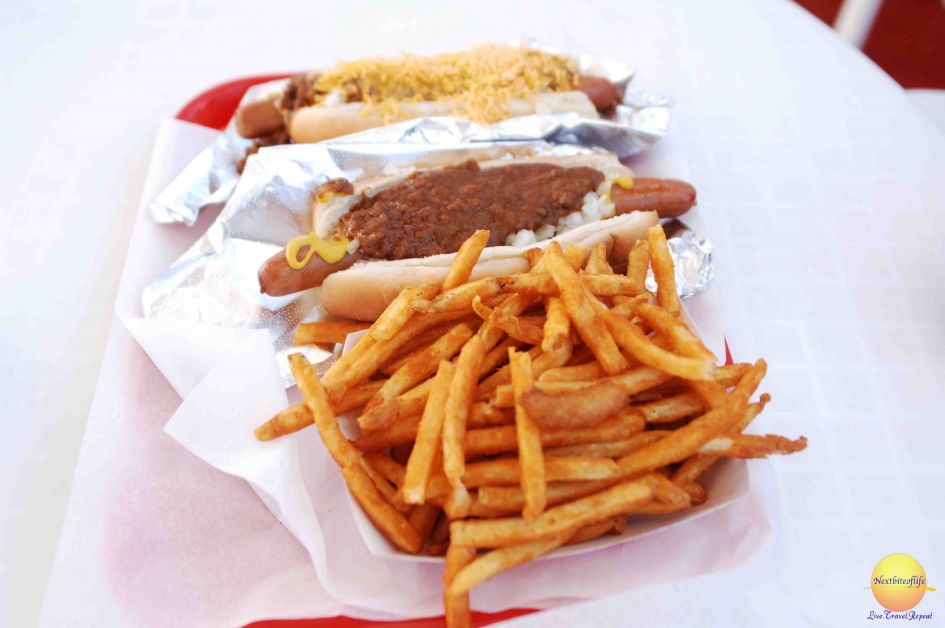 Yummy!!! scrumptious fries and onion rings too! Pinks should be on your L.A itinerary. My favorite indulgence. 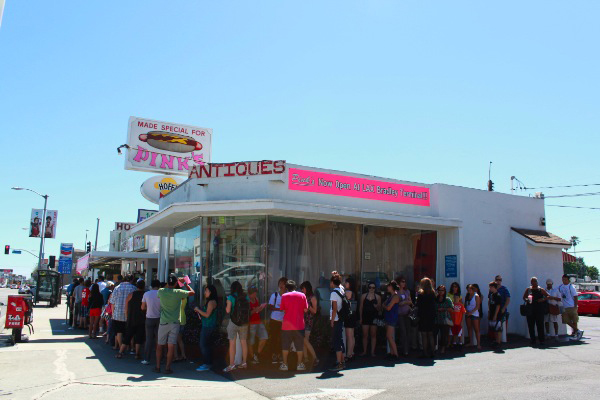 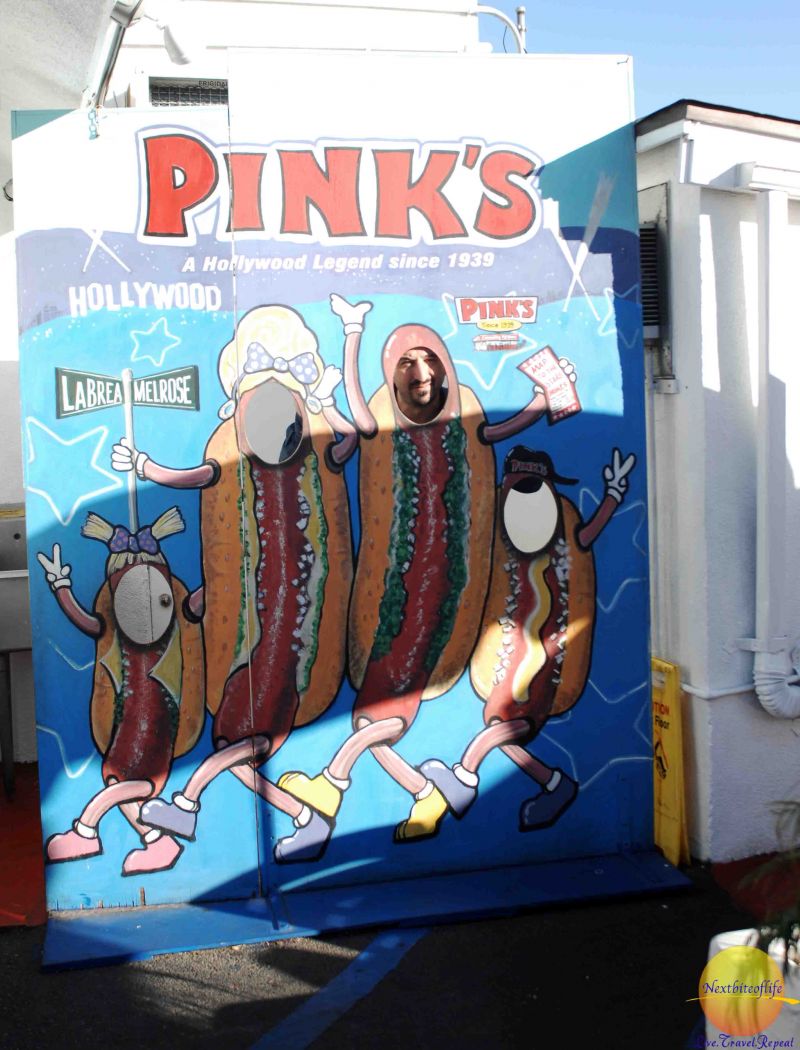 Crazy L.A life of a local! Federico had to do the clown and stick his head in ;-).

Bonus places in Los Angeles to visit that locals love:

This didn’t make it to the top 5 because for the most part, visitors are not shopping for groceries. It does however give you a glimpse of how the locals live their lives. L.A people being obsessed with organic products, you can find them shopping for fresh food at the farmers market. The 2 most popular ones are in Santa Monica and Fairfax Avenue in Hollywood. You might spot some of your favorite actors and actresses there as well.

Right next to the Farmers market on Fairfax sits this must visit destination that is a bit newer to the landscape in L.A. There are many high end shops such as Nordstroms and also places to eat, people watch and catch a movie. It’s a great way to spend a day, especially when combined with the Farmer’s market. It’s proximity to CBS studios also means there are plenty of chances to catch your favorite actors shopping.

These are just a few of the Los Angeles must see places that are enjoyed by locals and tourists alike. Los Angeles being a huge city, it is quite hard to narrow things down. Visiting these unique places will however make you feel like one of the people in the know. 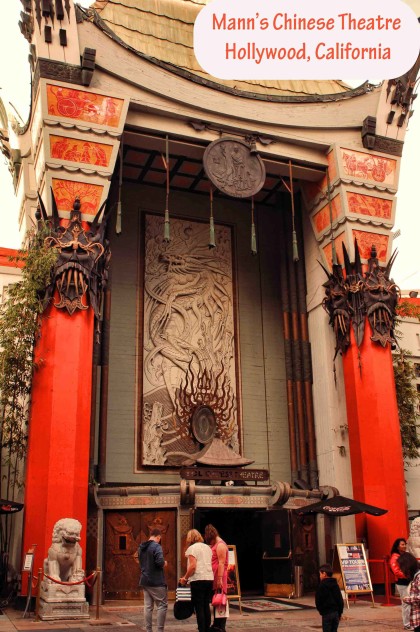 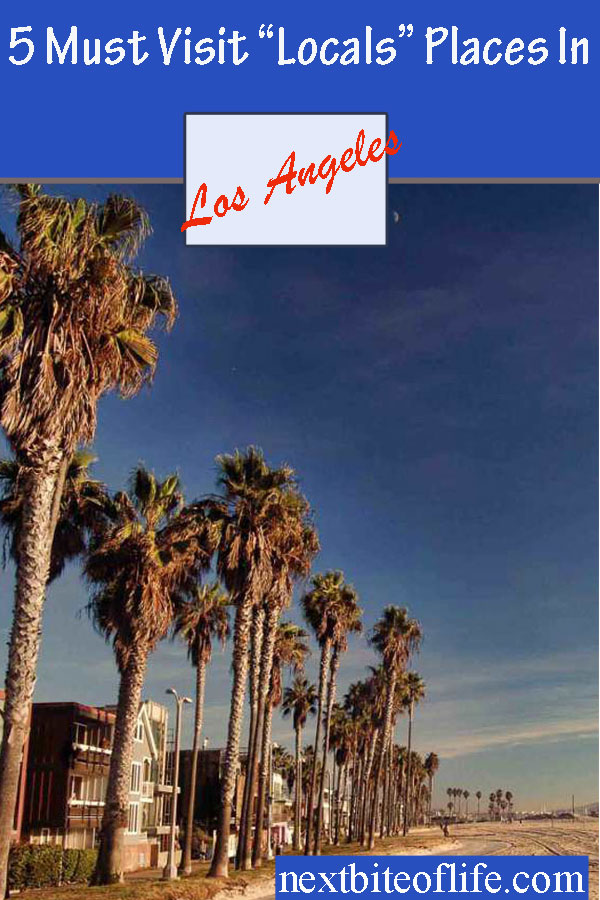 Have you ever been to Los Angeles, or are you more of a New York kind of person? If you have been, did you visit any of these places? If not, would you like to? Do you have any other suggestions for must visit places in Los Angeles?