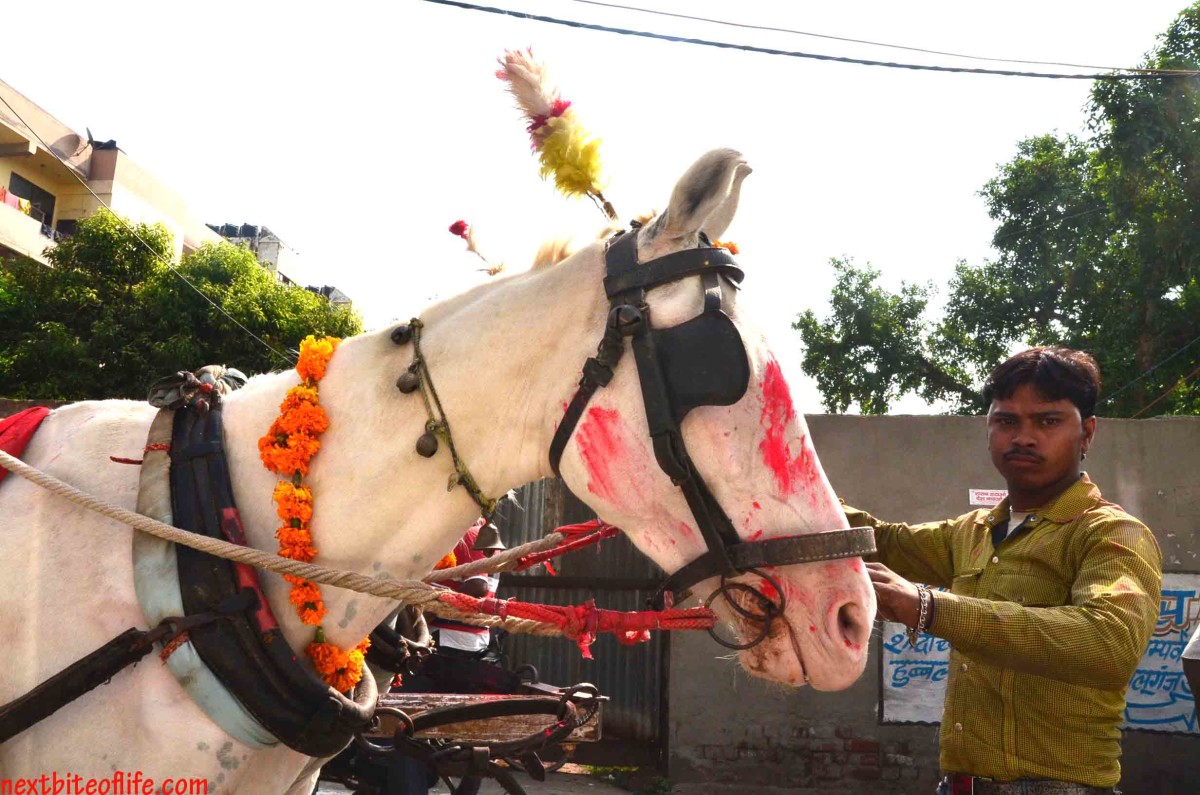 A colorful horse and his handler on the streets of New Delhi celebrating a Hindu holiday.

During our visit to India, we were fortunate enough to experience one of the many Hindu festivals that take place in New Delhi. The monsoon season  which always brings lots of rainfall to South India and runs from June to early October had just ended .

I think after all that wetness, the people were extremely happy to have good weather and another reason to celebrate. From what l gather October is the start of many a festival, culminating with Diwali, the biggest autumn hindu festival, and one that is celebrated by millions (Hindus, Sikhs and Jains) over a five day period with fireworks and plenty of family feasts. 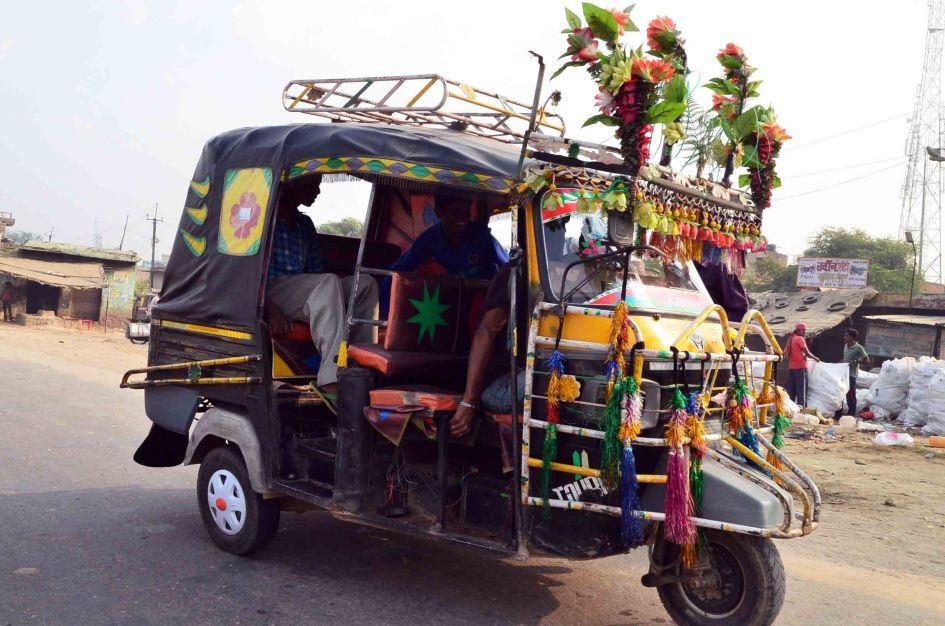 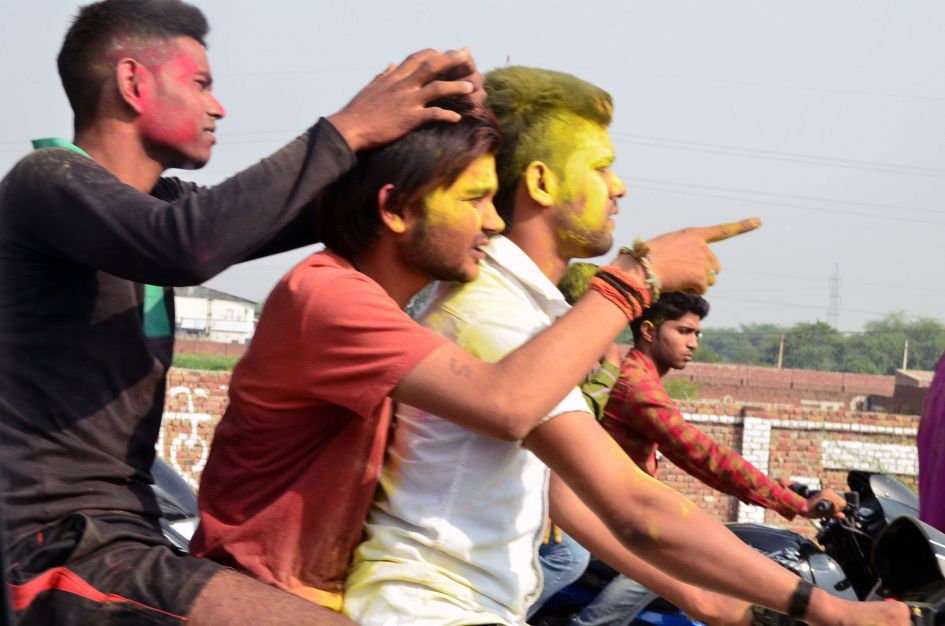 Three young men on a motorcycle in a procession. I love this picture, sure they just loved having a day off from school :-).

This particular festival was for a saint or guru, not sure which, named Madhvacharya Jayanti. From what l understood, his followers believe that individual souls and Brahman are eternal and mutually separate entities. I would be lying if l said l knew what that meant. Our guide tried to explain, but l could tell he didn’t even understand it much as it wasn’t his religion. I know he said something about Vishnu (heard that before, but don’t know what it means either. I always think spirituality though). 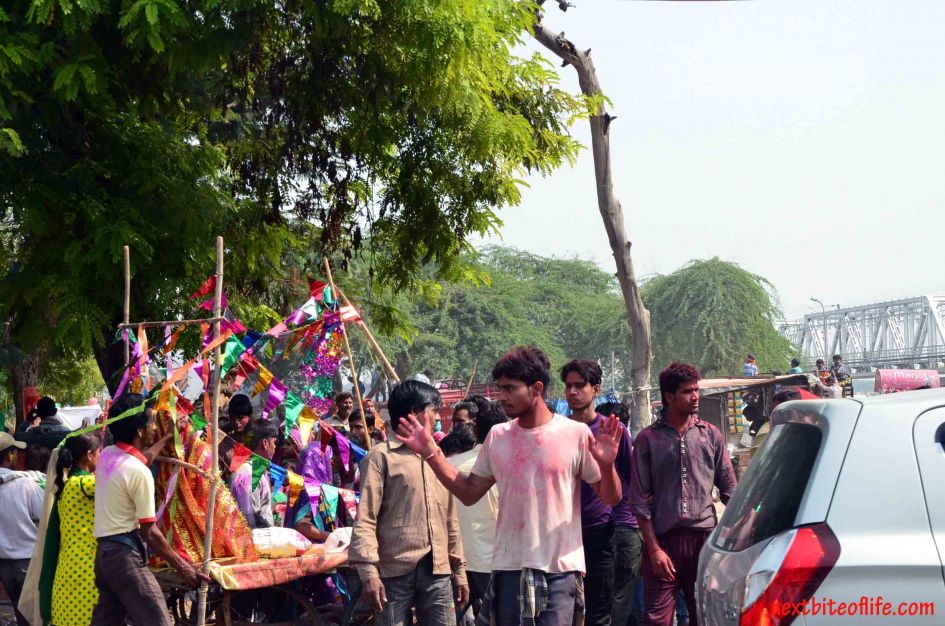 What we did see was a lot of celebration on the streets. Hindus had their faces painted in wild and beautiful colors, even the animals had on face and body paint. There were loads of trucks and tuk tuks decorated too and they were stuffed to the gills with people. I did notice that they had ceramic figurines (which looked like Buddhas to me) but were probably images of M. Jayanti.

What strikes you is the joy that is evident in all the participants eyes. You can tell that they are happy to share their religion and festivities with everyone. The traffic moved really slowly and they made eye contact with us, like we should join them. We did by moving to the music and clapping. It was fun to witness. 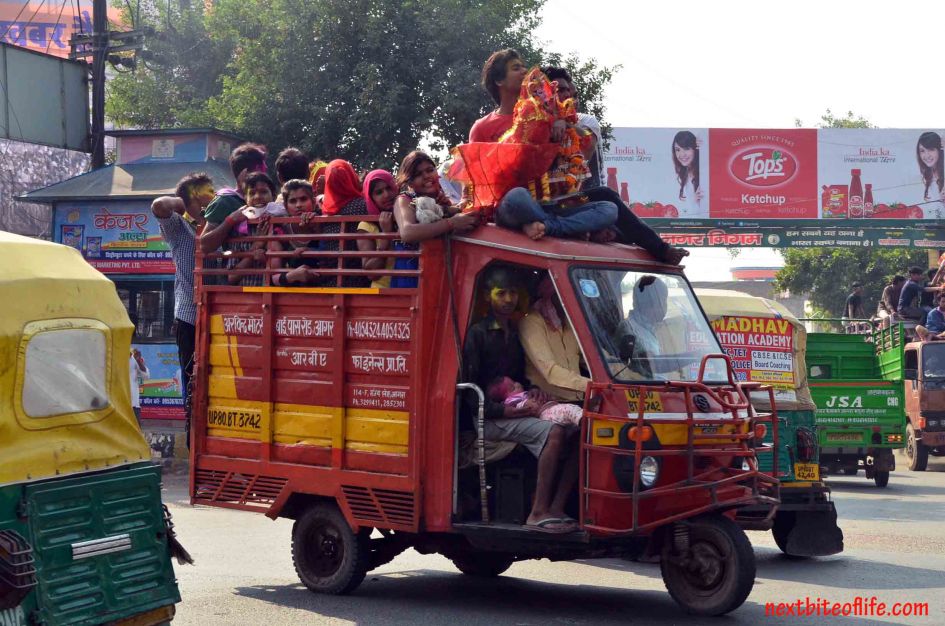 This little truck must have had at least 50 people squeezed into it :-).

Apparently, the followers do not acknowledge his death, but rather the day of his disappearance to Badri in 1317 C.E. Sounds like the same thing to me, but what do l know? :-). The cops had their hands full trying to control the crowds. It was bad enough with regular traffic, but throw in a procession every now and then that had people spontaneously dancing in the street and holding up traffic on both sides of the road, and you have a very slow commute for everybody. 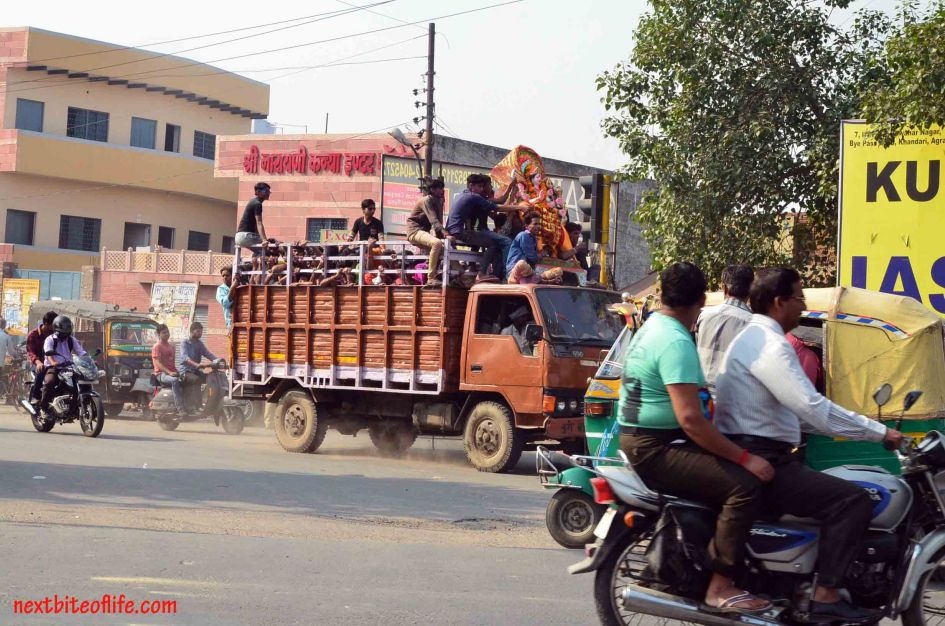 Part of another procession..I guess that is Jayanti on the hood.. 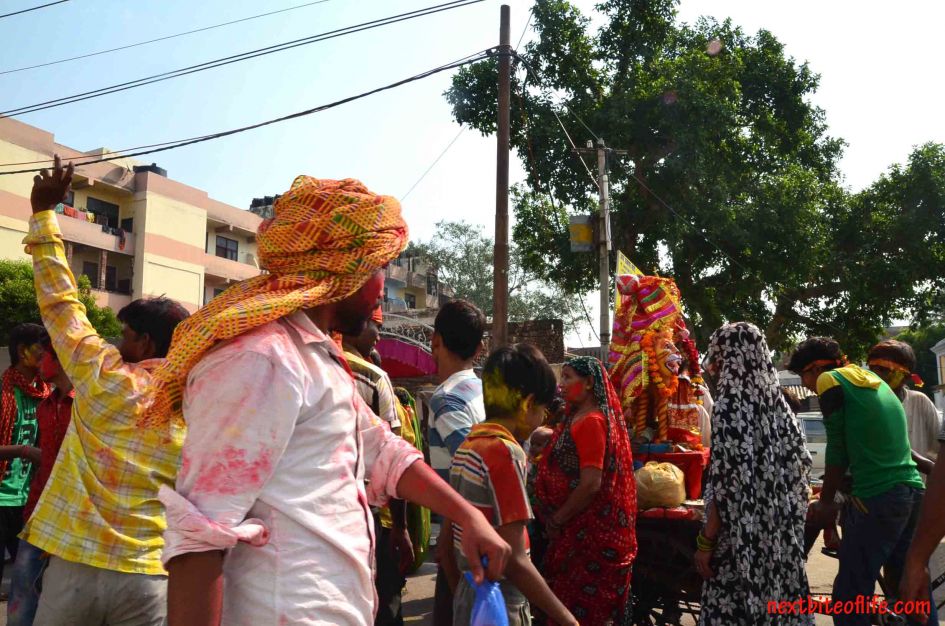 Everybody was having a good time, dancing in the streets or just people watching.

We had originally planned on doing some sight seeing. Instead we decided to enjoy the sounds and noise of the streets, after which we headed to the nearest mall. I was a bit surprised that the whole city was not involved with the festival. I had assumed New Delhi would be full of Hindus, but it seemed more evenly split with Muslims as  quite a few of the people were also watching the festival happenings. Our guide informed us that later on in the evening, after all the celebration, every Hindu person would be fed dinner free of charge. 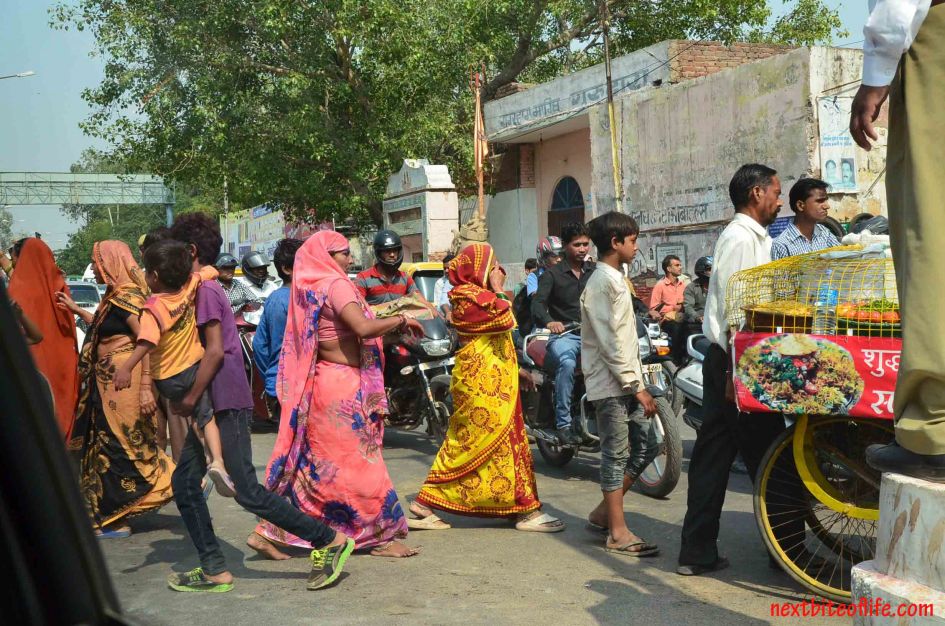 It was hard to figure which side to look at as it seems there were small celebrations everywhere. Traffic was just bad.. 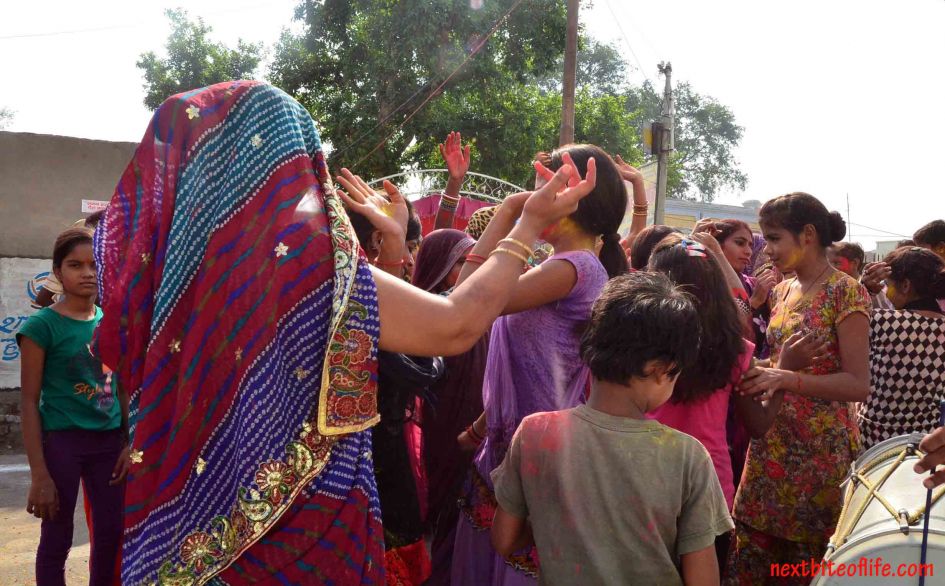 Young girls doing an impromptu dance in the streets of Delhi.

There were different spots in the city (one of which was close to our hotel) where huge tents were set up and we saw people already in line for food, hours before sundown. Huge stereo systems were set up, so yeah…very loud music. I loved it though, l am a huge fan of world music :-). This was one of our highlights of New Delhi. For our honest review of New Delhi, make sure to read this article covering the highs and lows.

Even the police man gave up trying to maintain order..He just climbed on the slab and observed while drivers fended for themselves. 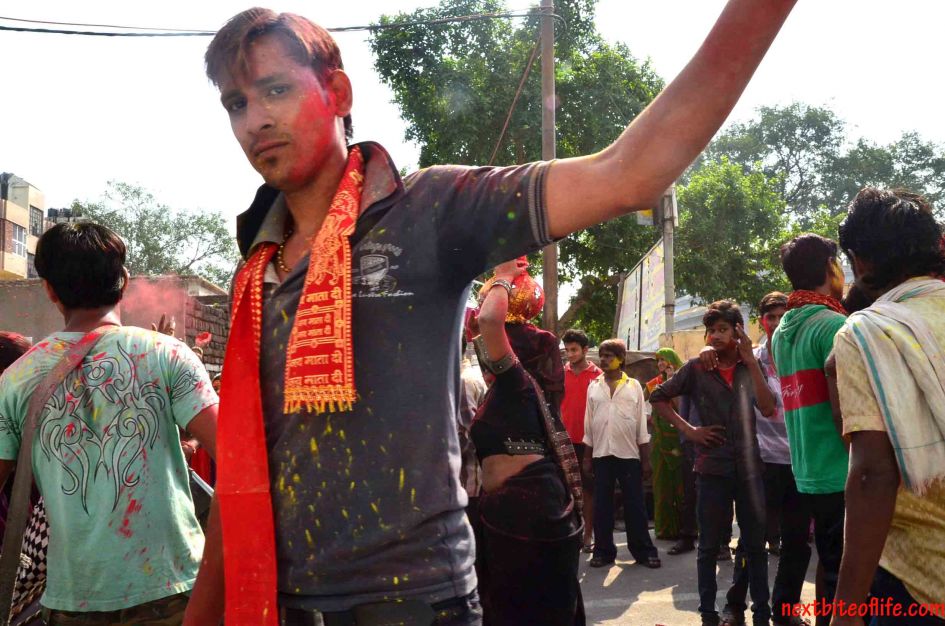 A young man tries to bring order to a chaotic scene :-) 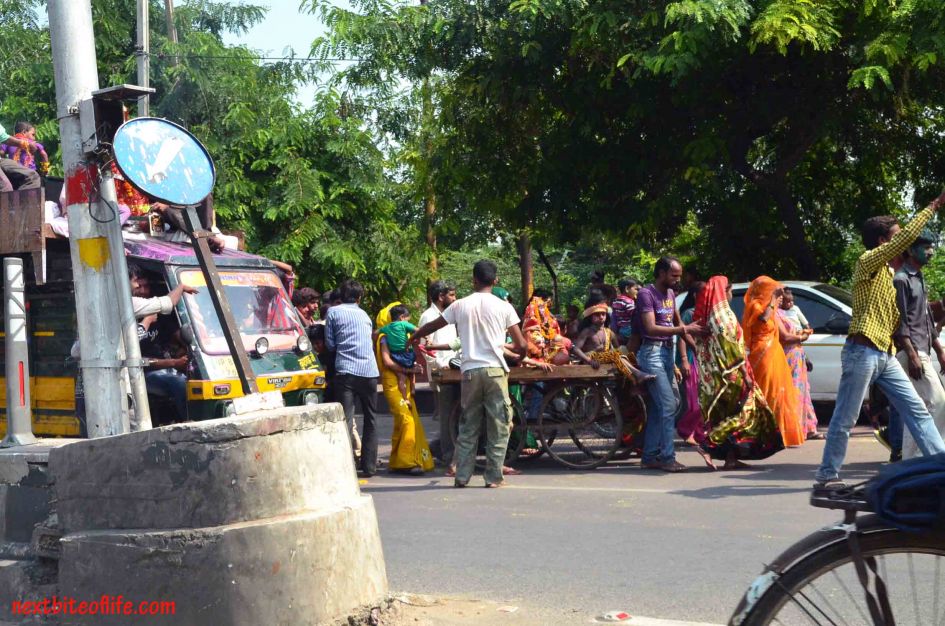 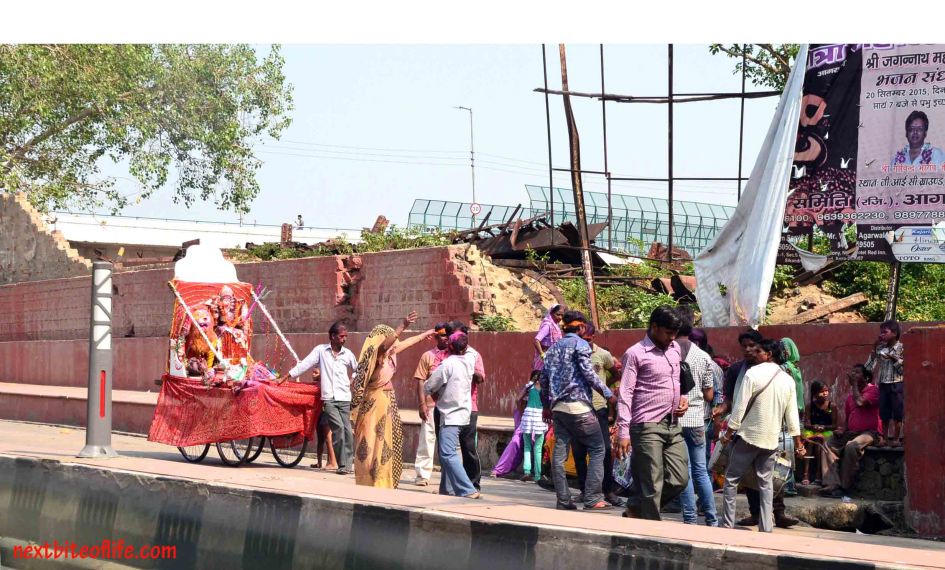 Dancing in the streets in Delhi :-) 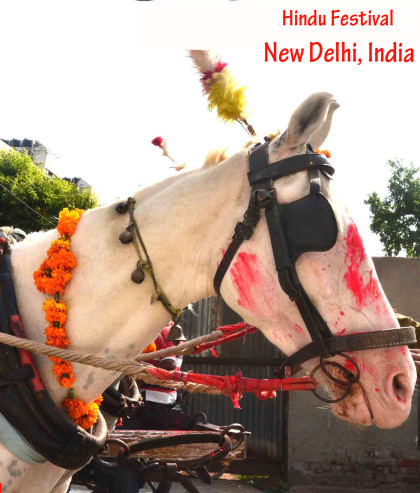 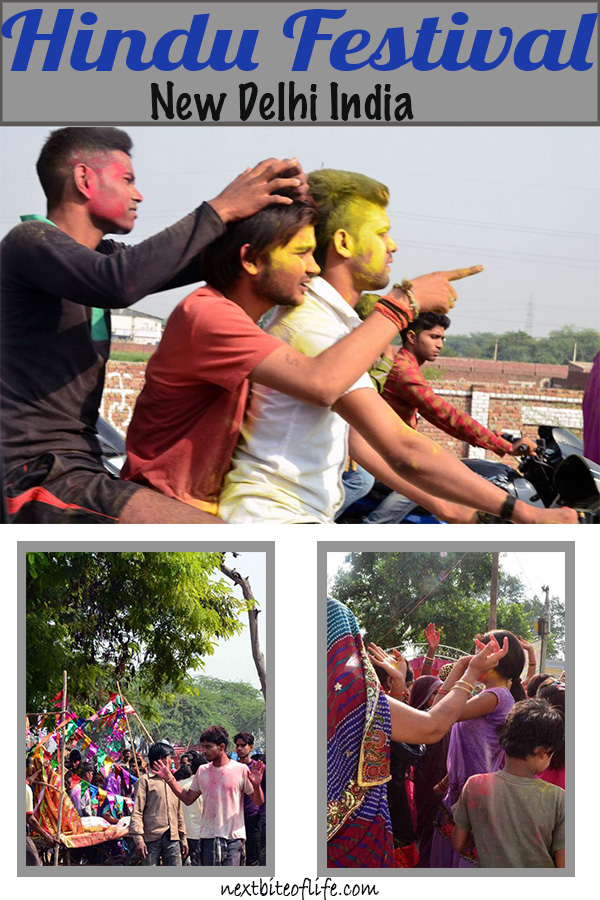 If you happen upon one like we did, make sure to stay and watch, and even participate. It was completely unexpected and we felt fortunate to be able to enjoy a religious and fun festival. It served to enhance our trip a bit more.

FIND THE BEST HOTELS IN NEW DELHI FOR YOUR STAY

Have you ever happily run into a celebration that derailed your plans? In Nigeria, it could be anything from a funeral procession to a carnival (those are my least favorite because they wear some really, really scary costumes and l feel trapped in the car. Of course, they can smell that, and surround the vehicle :-( ) to a wedding where whole streets have been rented out :-).