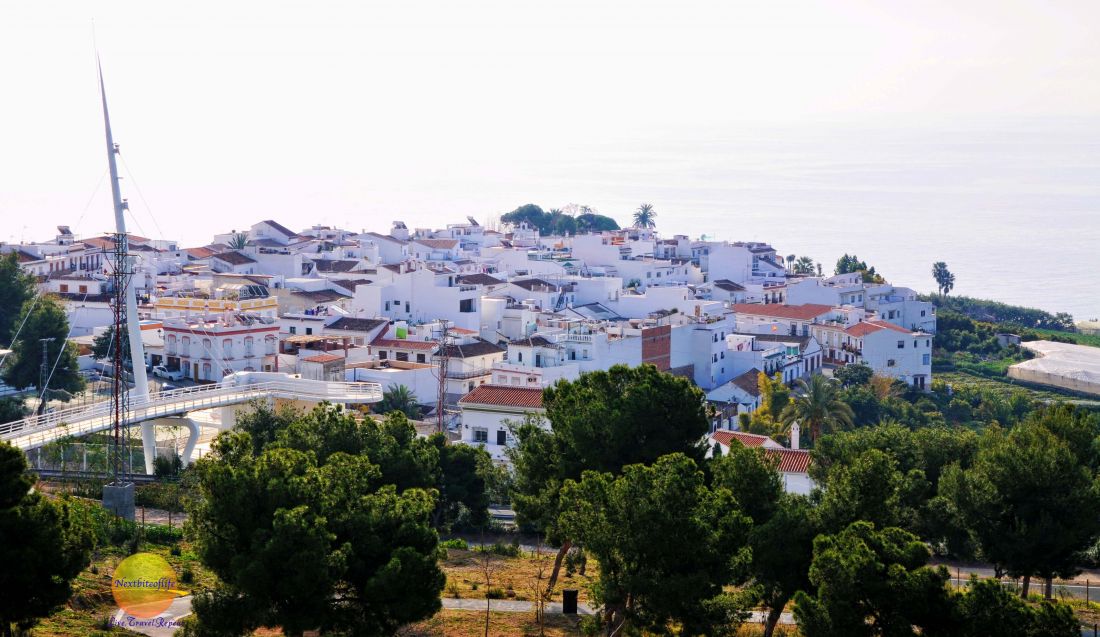 The Nerja Caves are located in the province of Malaga called Nerja. The distance from Malaga to Nerja is about 40 miles East of Malaga City where we live. It sits up high above the town of Nerja, one of those idyllic resort beach towns with white houses clustered together and narrow streets that constantly reminds you of Greece.

During the winter, it is mostly full of retired folks who enjoy the warmer climate and therefore very quiet as people go about their day to day life. In the summer though, the opposite is true.  Nerja becomes a loud, rowdy place that hosts hordes of tourists the majority being from other European countries, most of whom are seeking sunshine, beaches and tapas under the Spanish sky. The views from its famous Balcon de Europa is stunning as it offers views of both the Mediterranean and the gorgeous mountains.

Aside from the gorgeous beaches, another famous tourist attraction is the Nerja Caves, a fascinating discovery that is worthy of a visit and one of the top things to do in Malaga. Visiting this stunning attraction should be on your Malaga itinerary.

How to get to Nerja Caves from Malaga:

Alsa Bus: Normally, one would take an Alsa bus from the city. This is a cheap way to get to Nerja. Each ticket per adult costs €5 each way. The bus leaves from the Estacion de Autobuses in Malaga and the end point is the main bus station in Nerja. Journey time is anywhere from 70 minutes to just under two hours depending on the time you leave. You can find the bus schedule here.

Blablacar: Using this ride sharing service is another way to get from Malaga to Nerja. We had been seeing the commercials on television and decided to give it a try. Think of blablacar as paid hitchhiking. A car owner offers up space in his/her car to strangers for a fee. I was further convinced to try it after reading very positive reviews. It was quite painless, and popular.

I went online and searched for a driver headed to Nerja. We ended up getting a ride from a lovely lady from Holland who had the sweetest little dog. We were joined by a 4th person, a girl from Chile. The ride was about 40 minutes. It gave me a chance to practice some Spanish. It was a very enjoyable ride, and we have used Blablacar several times since.

It cost €3 each, shaving €1.50 off each bus ticket. The best part though was that it was direct. We took the bus back (could not find anyone heading back to Malaga on Blablacar), and the journey time was double because the bus had so many stops. A big thumbs up for Blablacar. They are rapidly expanding in Europe and something to consider.

Inside the Nerja Caves: 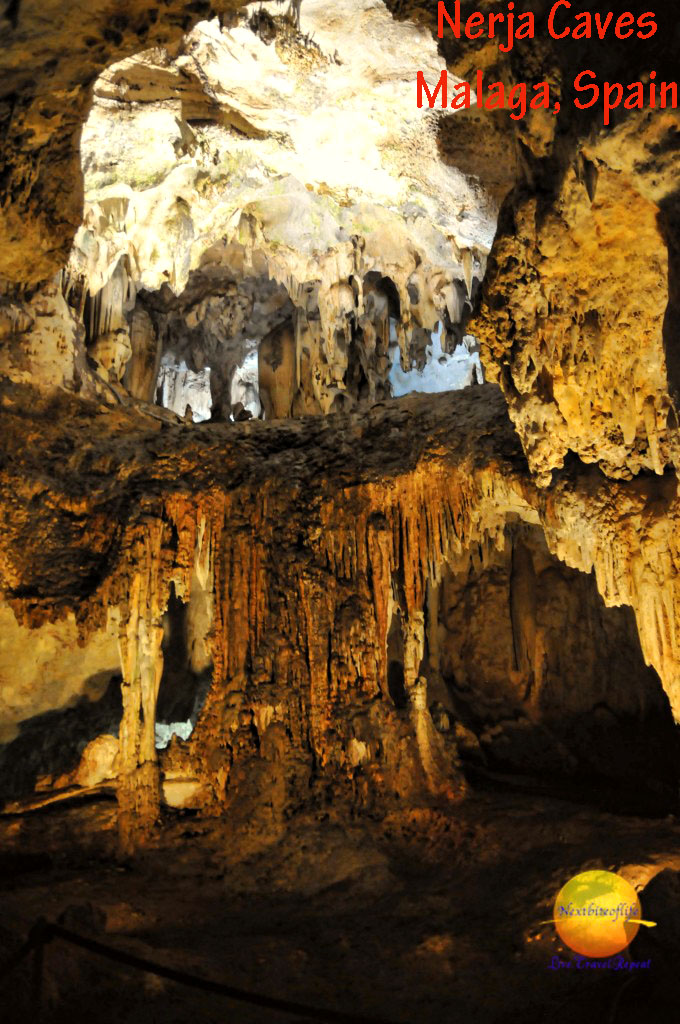 One of the many stalagmite and stalactite formations in the Nerja Caves of Malaga, Spain. 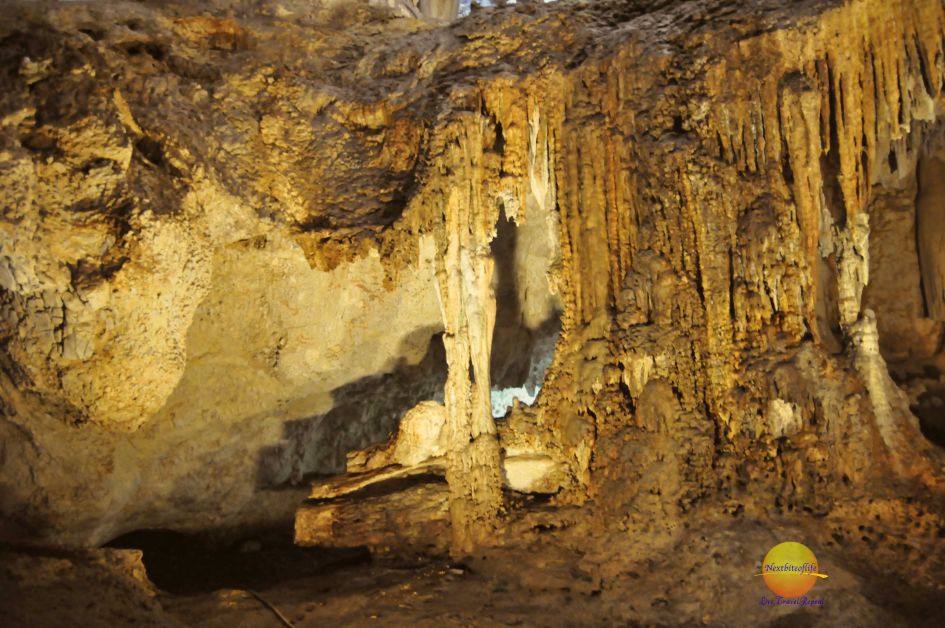 Inside the Caves of Nerja. It was very cool inside, a relief from the blistering heat outside.

Click here to find the best hotels in Nerja Spain 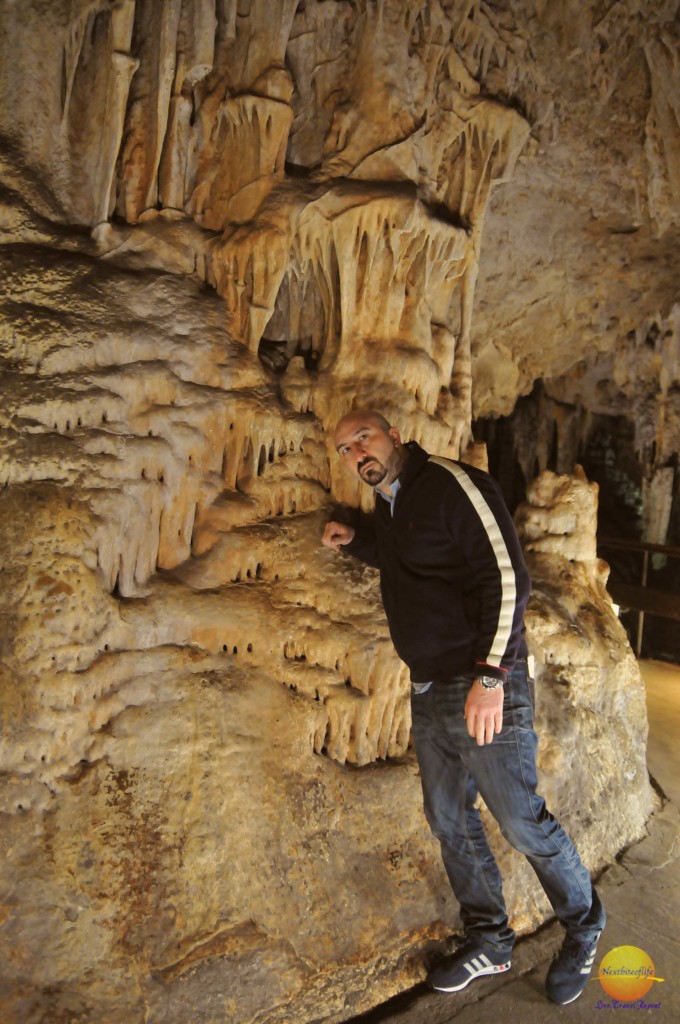 “Hanging” out in the Malaga caves of Nerja.

Protect your trip with the best travel insurance. Click Here for your free quote. 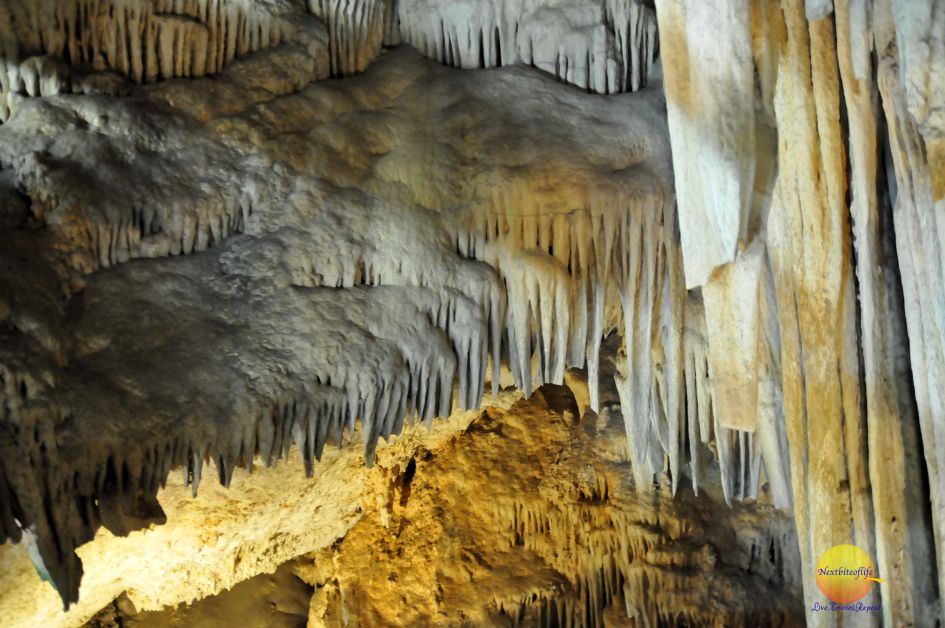 History of Nerja Caves of Malaga:

The Nerja Caves were rediscovered by five friends in 1959 who had entered through a sinkhole called La Mina. There are actually 3 caves, but only one is open to the public. The other 2 were discovered in 1960 and 1969. Supposedly, they have discovered Neanderthal cave paintings in them, and there are ongoing studies. It would be neat if they were to open those up eventually too. 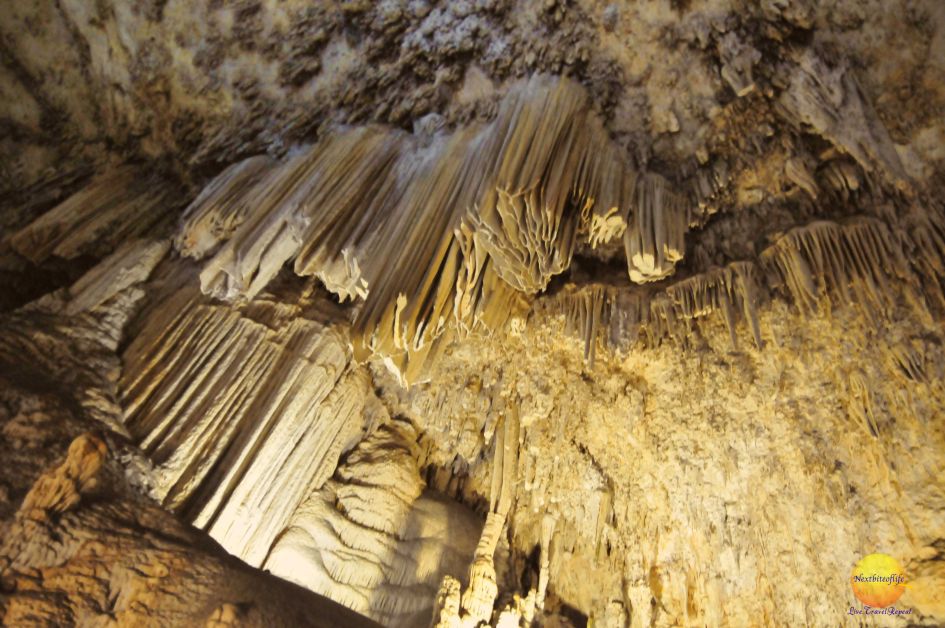 They almost look like hanging curtains, don’t they? at the Curves de Nerja Malaga 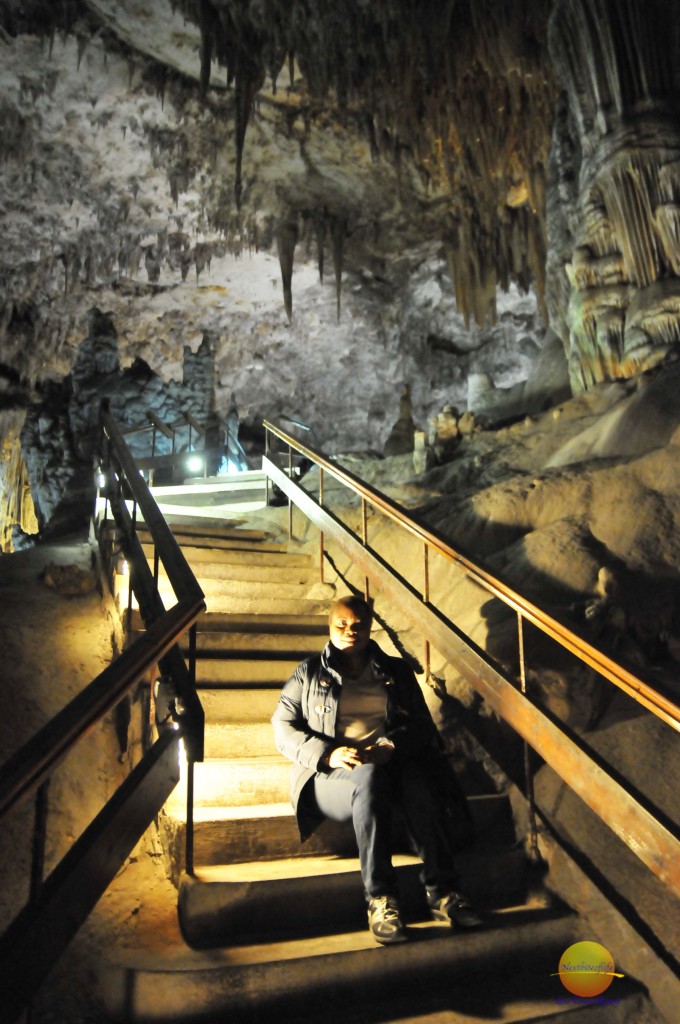 What to see in Nerja Spain. Chasing the light at the Nerja Caves so l can be seen :-) 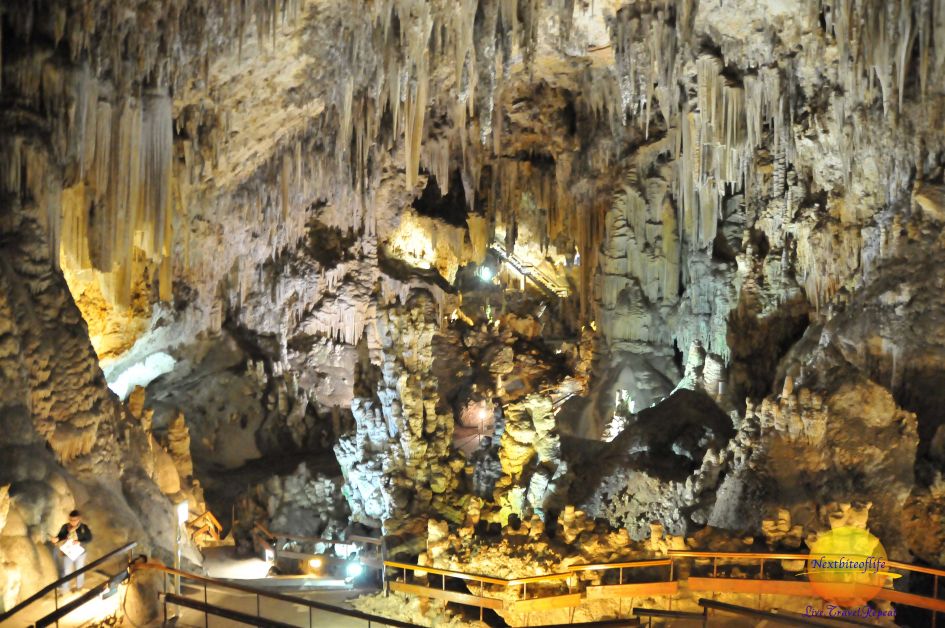 Can you just imagine how incredibly cool it would be seeing a concert here?

How old are the Nerja Caves?

The Nerja Caves have been there for about 5 million years!!! At various times, they were inhabited either by people, or by cave hyenas. It is about 3 miles long in total. The cave open to the public is divided into like 10 rooms, with names like Bethlehem, Waterfall, Ghosts and Waterfall. You are allowed to take pictures, but can not use any flash, so you can just imagine how insanely difficult it was trying to take good photos. Hopefully, you are able to get an idea of how immense and truly magnificent this place is. 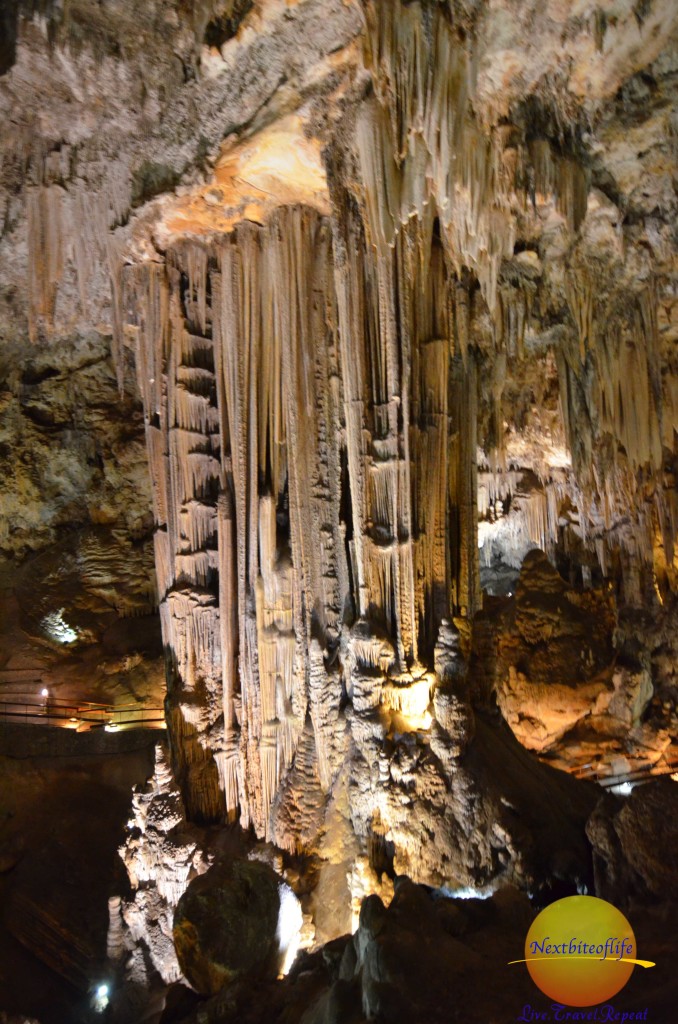 Inspiration for the Sagrada? Saudi was influenced by nature after all. 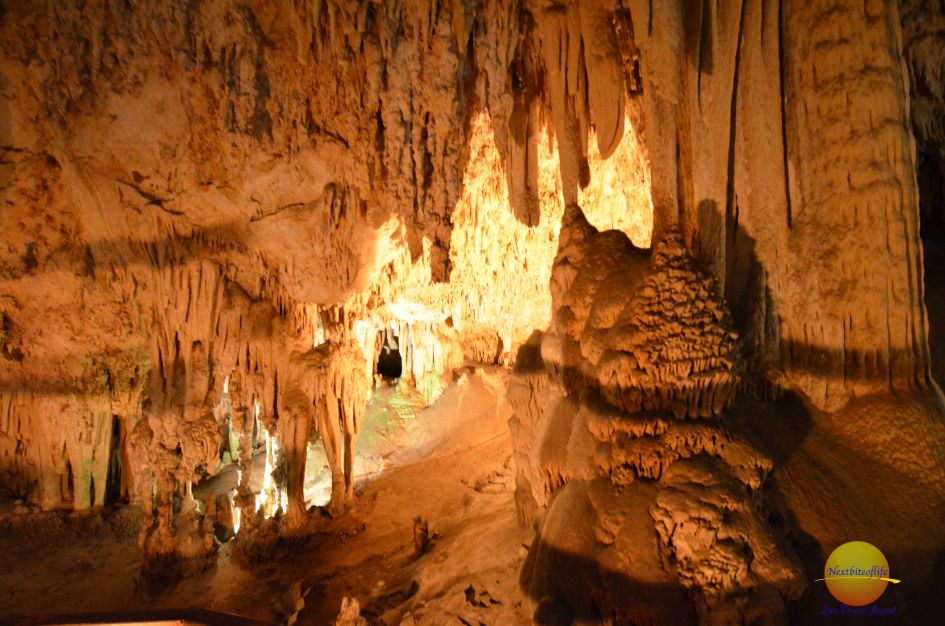 The formations were certainly impressive. 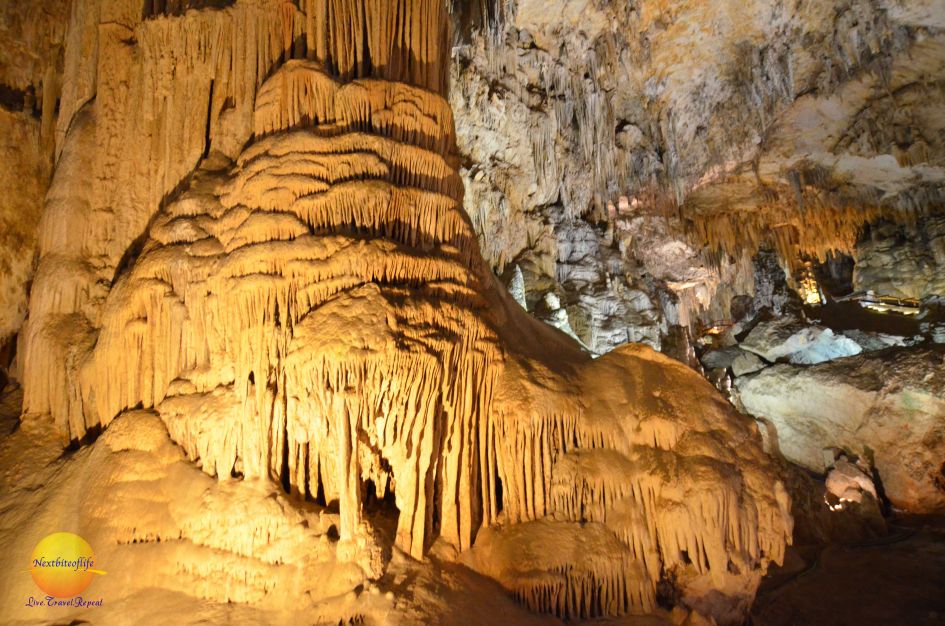 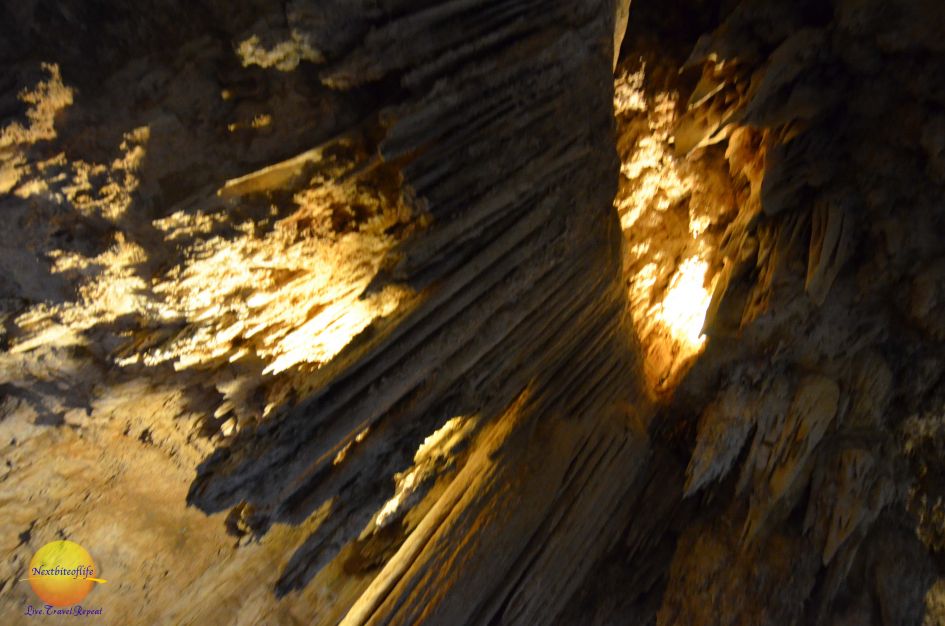 I found the formations very hypnotic and even seductive. Nature is truly magnificent.

The Stalactite (the ones hanging from the ceiling) and the Stalagmites (the ones rising from the floor) are made from water getting into the fissures of rock and then over the years, with help from landslides etc. forming these incredibly awe inspiring, humongous things. It is easy to see where Gaudi got his inspiration for the Sagrada Familia Church (I’m sure he must have been influenced by nature like this and other caves :-) ). It certainly doesn’t get more inspiring than this! 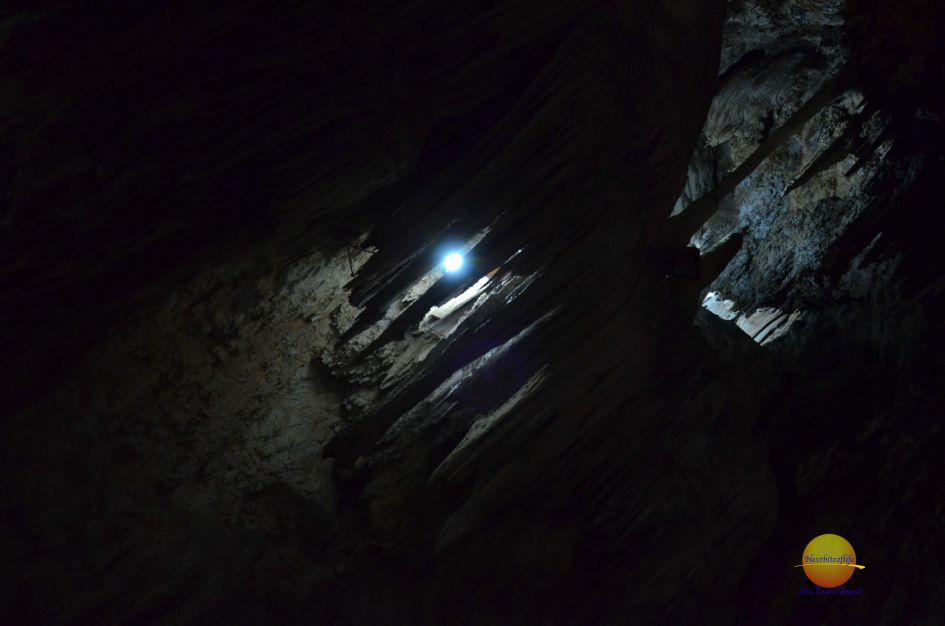 Kind of spooky.. especially when there are maybe 10 people in the whole cave.. 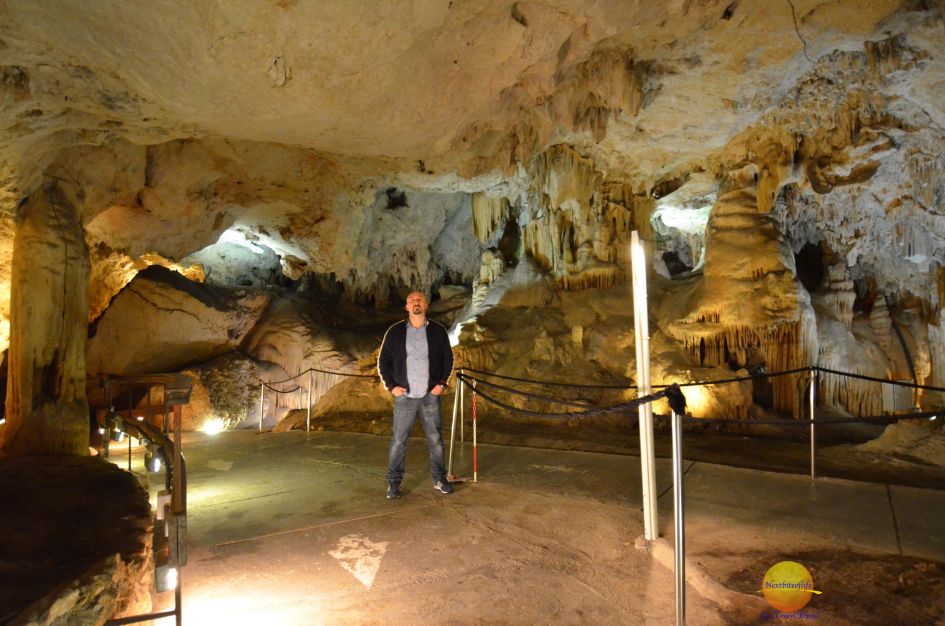 I don’t think l would like to get stuck in here at night though. Too scary!

A visit to the Nerja Caves is absolutely recommended by yours truly if you find yourself in Malaga. How much does it cost to see the Nerja Caves? The entry fee to Nerja Caves is €9, and it takes about an hour if you go straight through, without the crowds of course. Another cool thing about the Nerja Caves is the Amphitheater right in there, with free concerts held at various times yearly. Apparently, the acoustics are great. I agree with that. We were alone on the stage, and l sang “Ave Maria” at the top of my lungs thinking we were alone, until we walked past it, and the guard said “Ola” while laughing!!! :-) . That’s how dark it was!!! 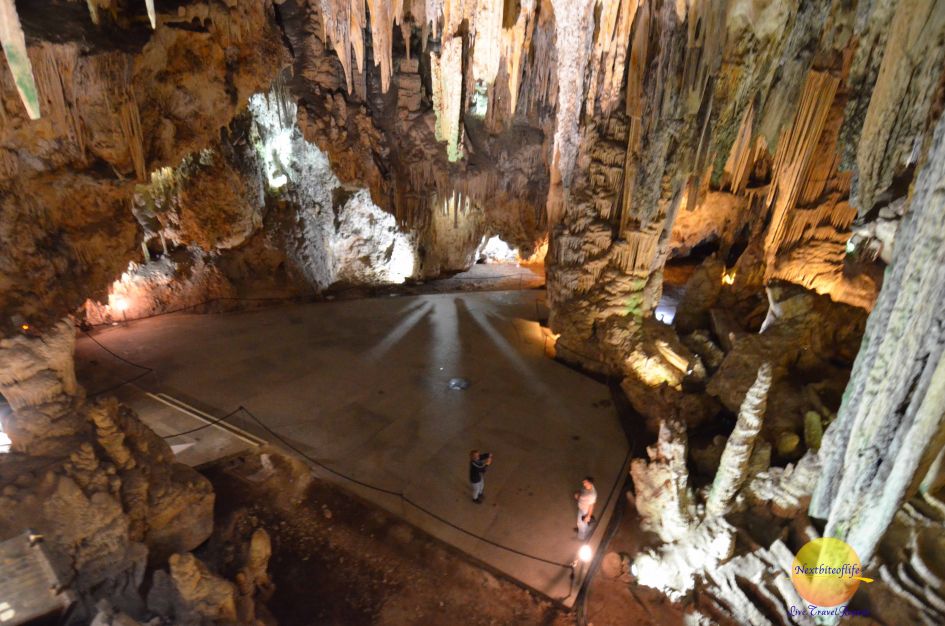 The Nerja-Caves stage where l gave my concert!

The other famous landmark close to the Nerja Caves is the Eagle Aqueduct in Maro, which is about 2 minutes from there. It was built in the 19th century and was used to transport water from a spring in Maro to an old abandoned ruin of a sugar factory, which looks beautiful from the top.

A visit to Nerja, one of the most beautiful Andalusian white villages is an awesome way to spend a day and makes one of the best day trips from Malaga. If you’re moving to Spain, make sure to buy our latest eBook that walks you through the steps and funds needed for your non-lucrative visa and start enjoying life in the sun sooner. 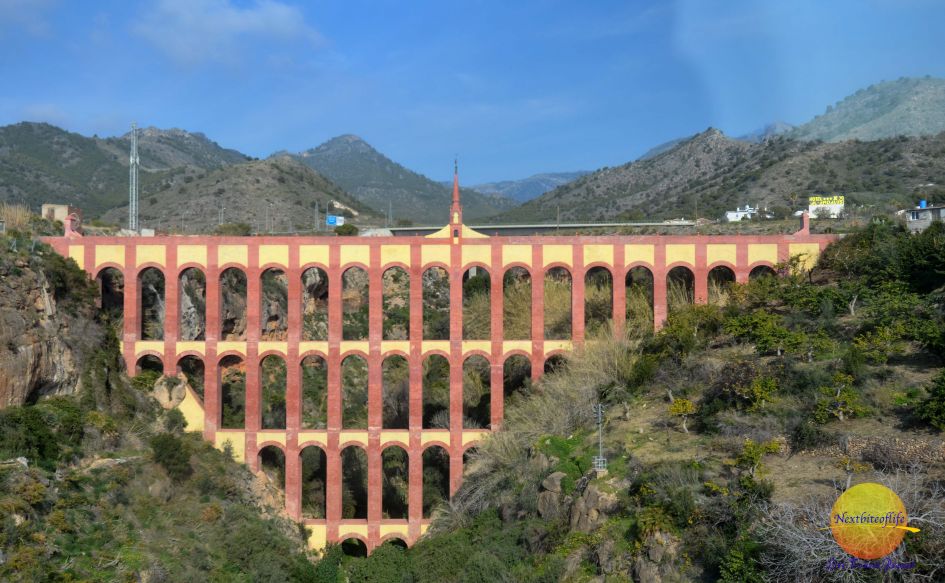 Eagle Aqueduct of Maro in Nerja

Does the Nerja Caves of Malaga sound interesting to you? Is it someplace you would like to see? Does it make you want to visit Malaga?