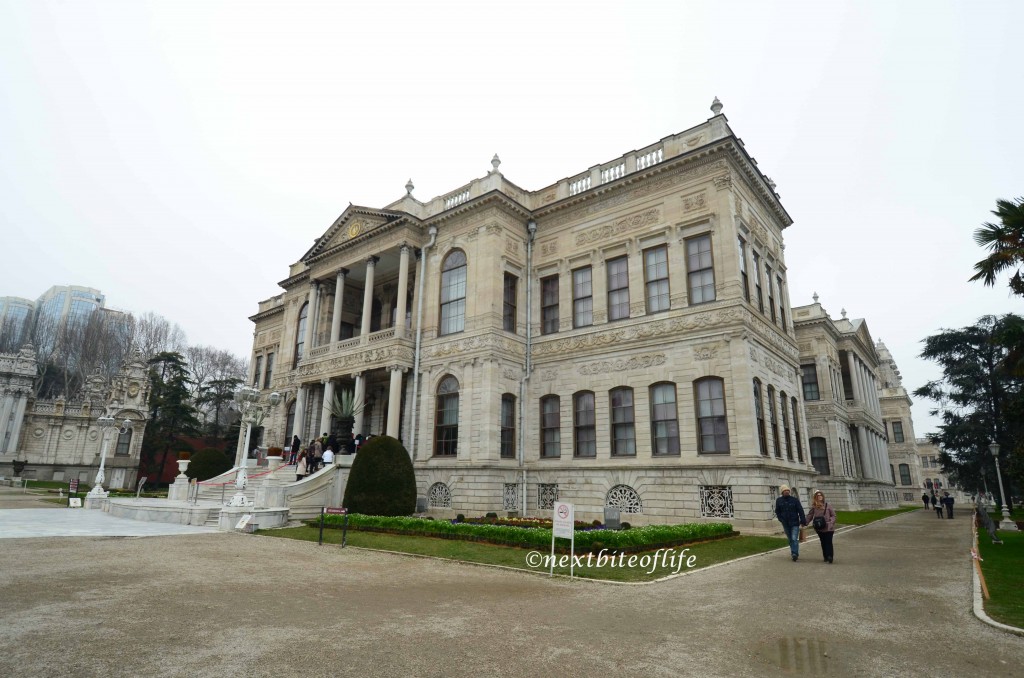 Among the many places we visited in Istanbul, we also made sure to go back and revisit some of them, including visiting the Dolmabahce Palace and the basilica Cistern especially. These were stops of our days on the Hop On-Hop Off bus and we decided to dive in a bit deeper and revisit them on our own. The palace has been home to a bunch of past Sultans and is quite impressive, lots of Instagram spots around the palace if you’re into that.

This post contains affiliate links. If you purchase from the links, we make a small referral commission.

Two very different places. One with a royal history and the other with just a history as the largest surviving cistern left from the old days of Constantinople. Istanbul is full of so much history and the city is best described as electrifying. With a population that exceeds 19 million people, you can just imagine the vibe of the exotic city.

Looking back, this is one of those times l would have definitely done a small group tour of Dolmabahce Palace. I think it would have made for a more pleasant experience and we would have learned more than we did doing the tour on our own. It was chaotic at best. The tour lasts approximately 45 minutes. 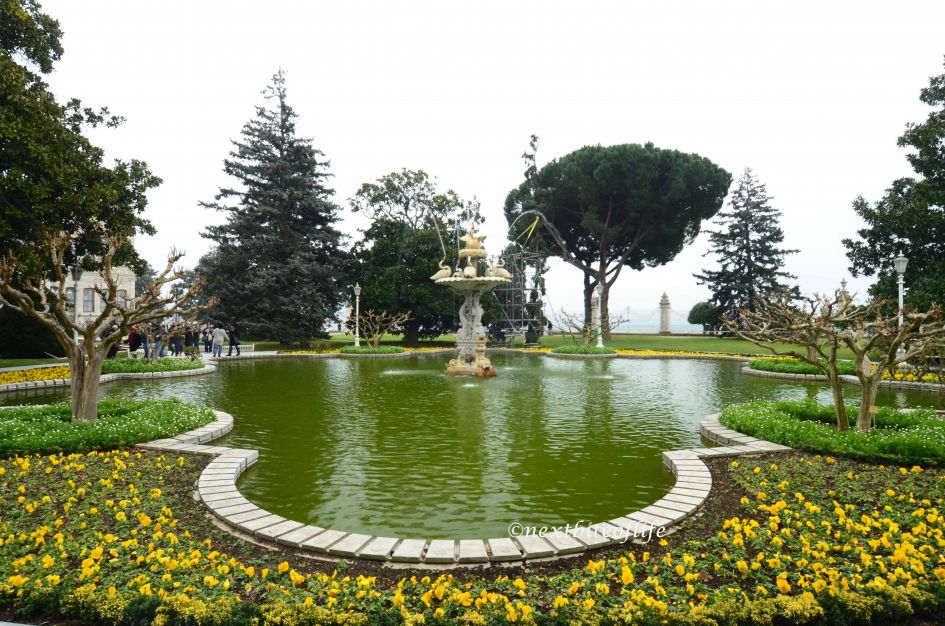 The gardens at the Dolmabrache Palace were beautiful …very much so.

Now, for the bad part. It is a disorganized mess. Considering that it wasn’t in the peak of summer, you would have thought things could be handled a lot better. First you wait in line for a very long time to get your ticket which was about $11.50 per person converted.

After this, you go stand in another line to get into the Palace. This is where it sucks mostly. You are just left standing there, no one tells you when the next tour is, no signs whatsoever! it’s freezing and you see people skipping line after saying a few words to the guy at the door. We were left waiting for at least 40 minutes. The guy then comes out, asks if anyone speaks Turkish, and if you do, you get to skip line and go inside, while everyone else is pissed off. You finally get inside and discover that it’s a guided tour only. 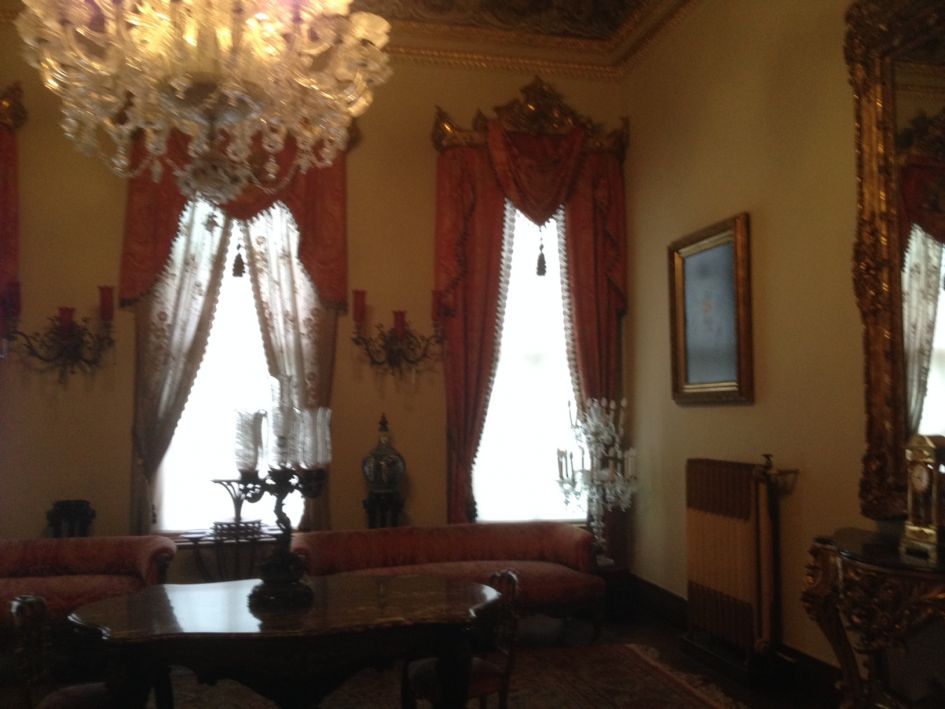 There was a lot of pink and gold in the interior of Dolmabrache Palace. 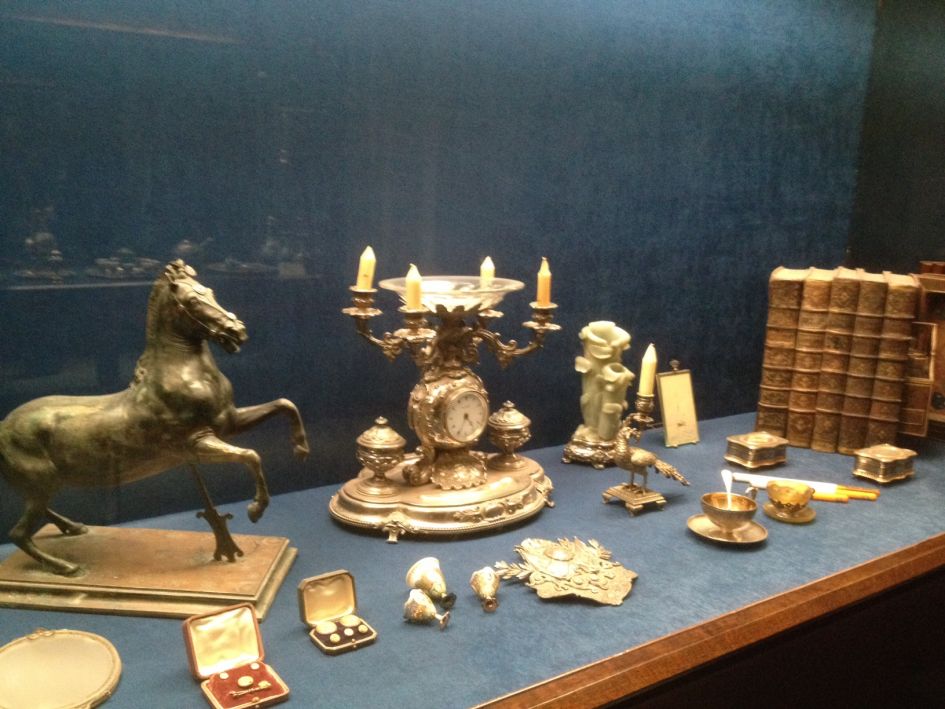 Inside Dolmabahce Palace. Some of the household items were on display. All solid gold of course. Nothing but the best for the sultans.

No headphones were given, just a tour guide who was barely audible as there was another huge group in front of us, and soon enough, another group behind them. You were constantly being rushed from one room to the other.  I could barely hear or understand what was being said.

The worst part is that you are not allowed to take photographs either, something that was not disclosed to us prior to entry. ! Anyway, risking life and limb, and probably the guillotine, l managed to snap a few in the chaos, and here are the fuzzy results.

Take pictures of the palace exterior and you’re good to go. You are not missing much as far as the interior is concerned, especially if you have seen other palaces. Dolmabache interior is mostly a bunch of pink rooms (what is the royal fascination with pink l wonder?). The only answer l can come up with is that in those days, it was quite common to copy the other palaces around the world, and then make yours bigger.

Therefore, Versailles is built, they send their architects to study the design, and then have them come back and repeat the same, right down to the color schemes and gardens. No originality whatsoever.

The half moon window in the image below is where the women had to gather to watch the proceedings going on in the palace rooms. Women were not allowed to be present with the men, and so to follow, they gathered around this window for a glimpse into life they could not experience. Insane! 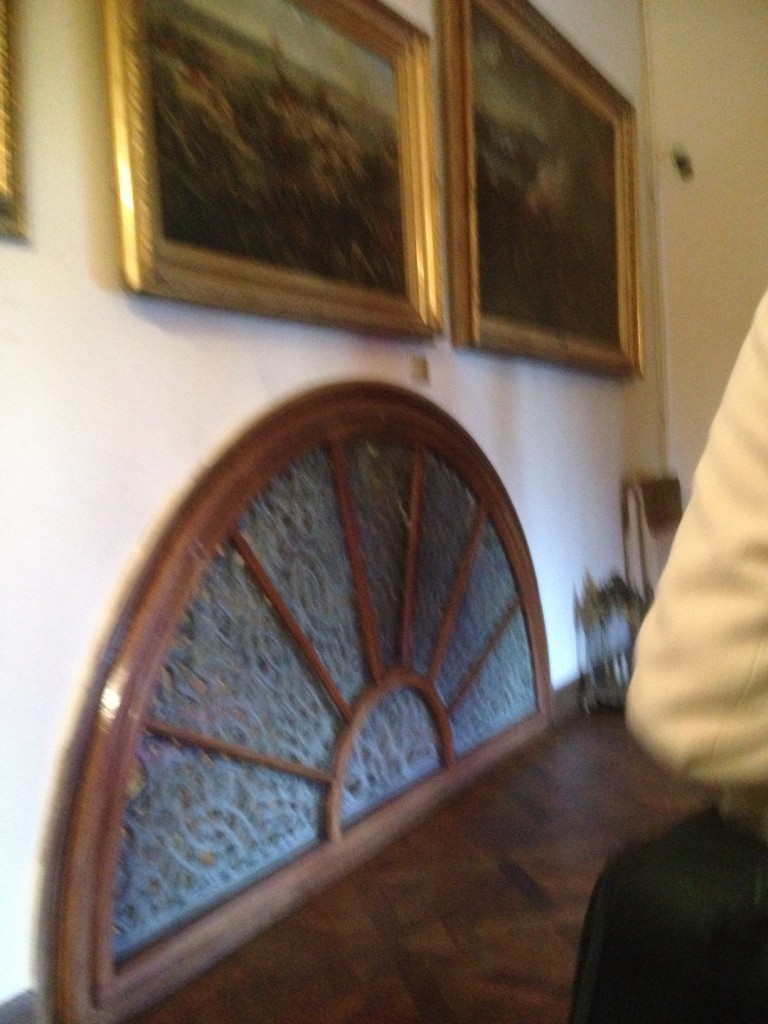 The “women’s room” in the Dolmabahce palace interior. That little window was the only way to see the mens meetings. 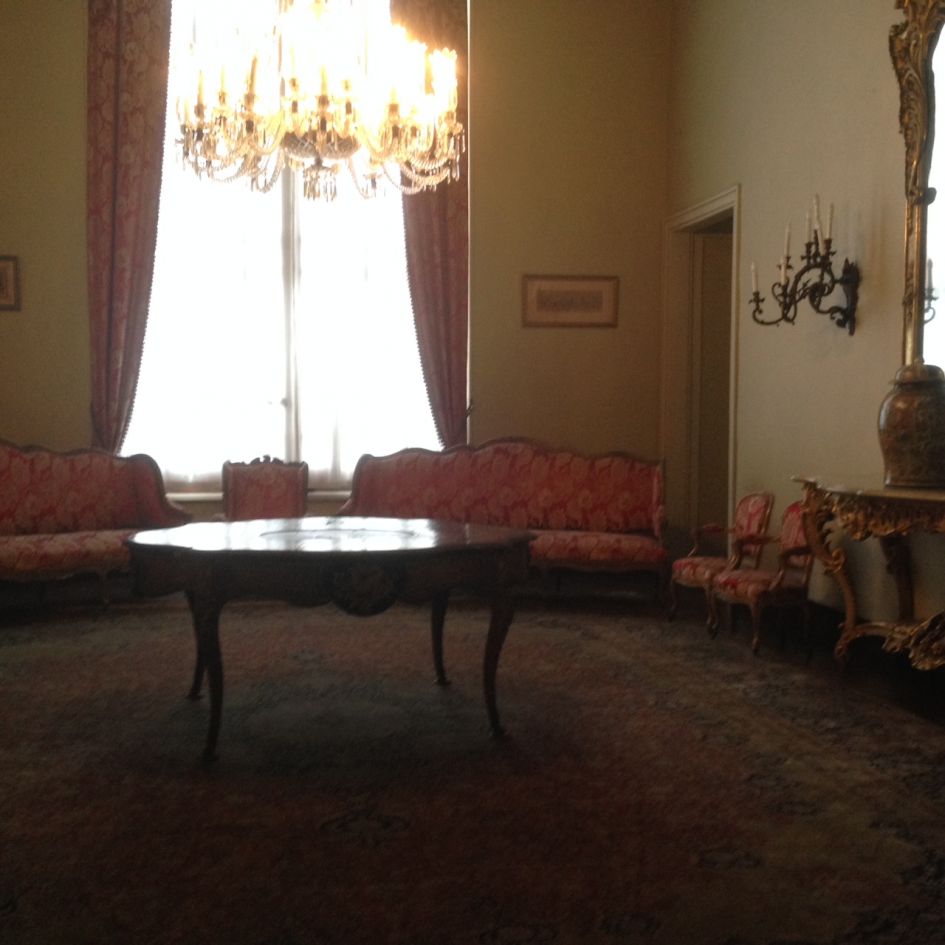 more pink in the interior of the palace. What a shocker! The rugs in various rooms were amazing though, and probably worth it just to see them as l have a fascination with Persian rugs. 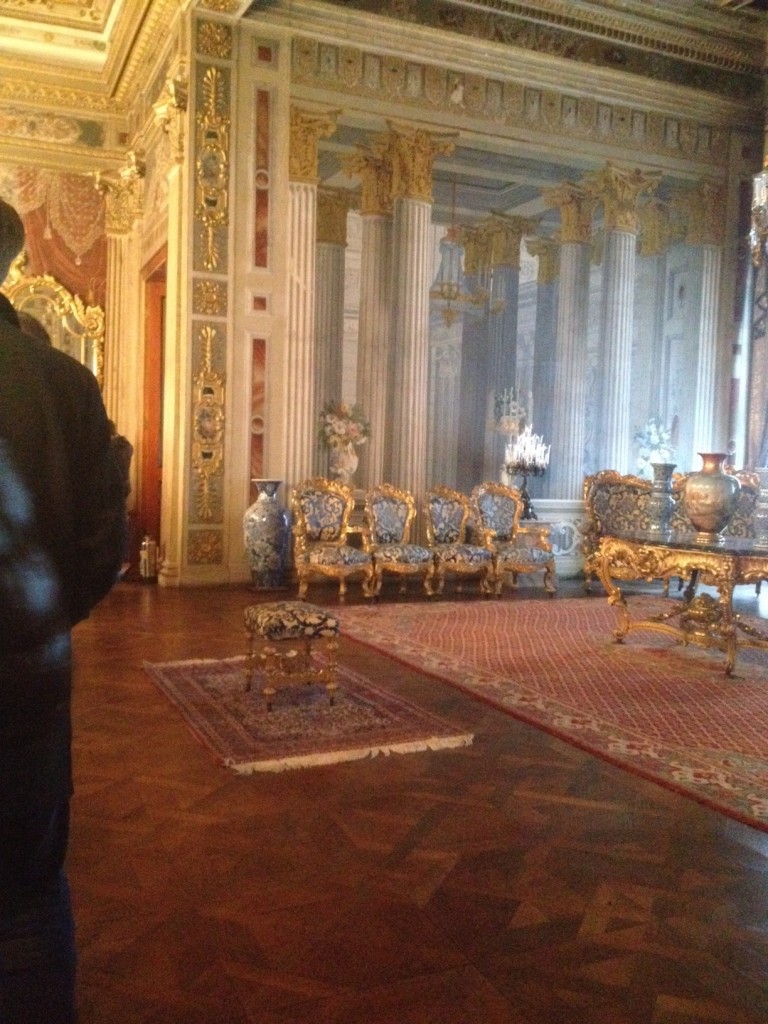 and gilded gold at Dolmabahce palace . It really does remind you of any French palace. I think l had hoped for a more Moorish influence. 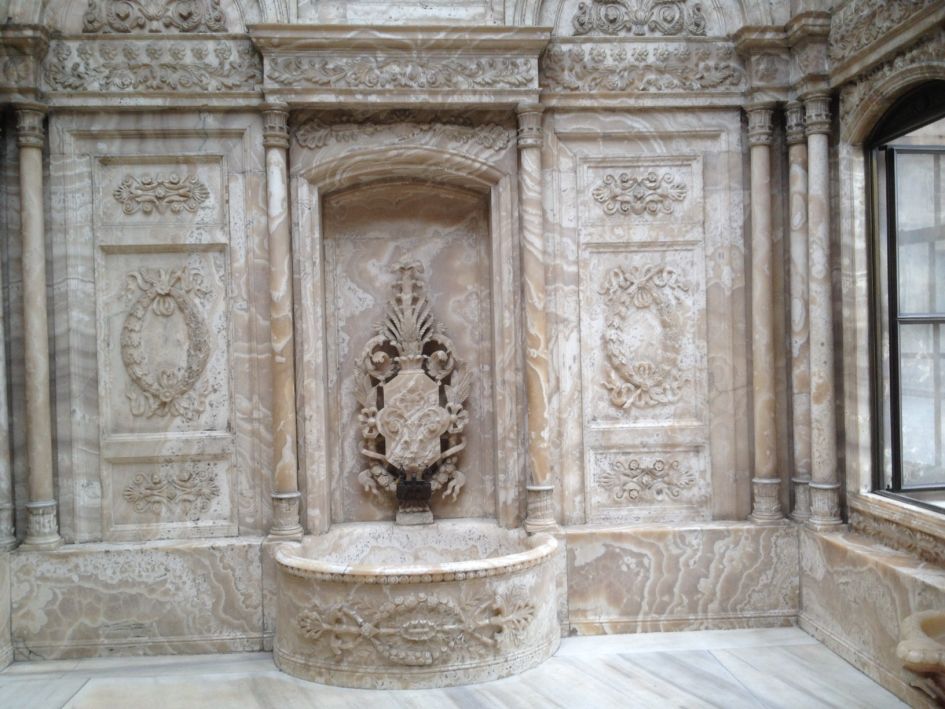 Hard to snap pics on the sly inside Dolmabahce place, but we tried….this room was cool. The praying room was next to it, so it’s where they wash before prayer. Everything was solid marble and very cold to the touch.

We also visited the Basilica Cistern. It is located in the Sultanahmet Square and lies below the city. It is so lovely and serene and fish swimming about peacefully. It is quite dark though, you have got to watch your step, but very highly recommended. The columns are gorgeous and there is the upside down Medusa base at the end.

Another name for the Basilica Cistern is Yerebatan Sarayi and there are a total of 336 columns (12 rows of 28 columns). The columns are made of marble and Corinthian style granite. One of the columns is called Hen’s Eye because of the tear motifs on it. It is believed to acknowledge the slave lives lost during construction. Hundreds of the over 7,000 slaves died.

Some of the famous Hollywood movies that have been filmed at the Basilica Cistern include Inferno – the third instalment of the Da Vinci Code series, From Russia with Love, and Skyfall in the James Bond series of movies.

There are sometimes concerts at the Cistern, but they are very pricey due to limited seating. Plan on about a 30 minute visit. I really enjoyed it. It’s large, yet feels intimate. 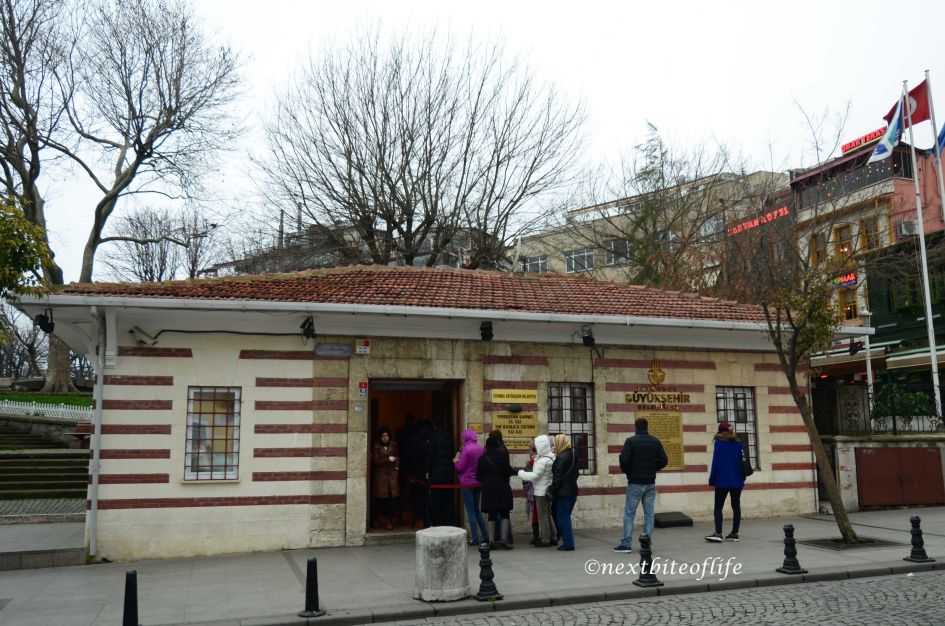 Entrance to the Basilica Cistern at Sultanahmet Square. We were lucky there was no line. Since our hotel was close by, we basically waited until it was a quiet time. 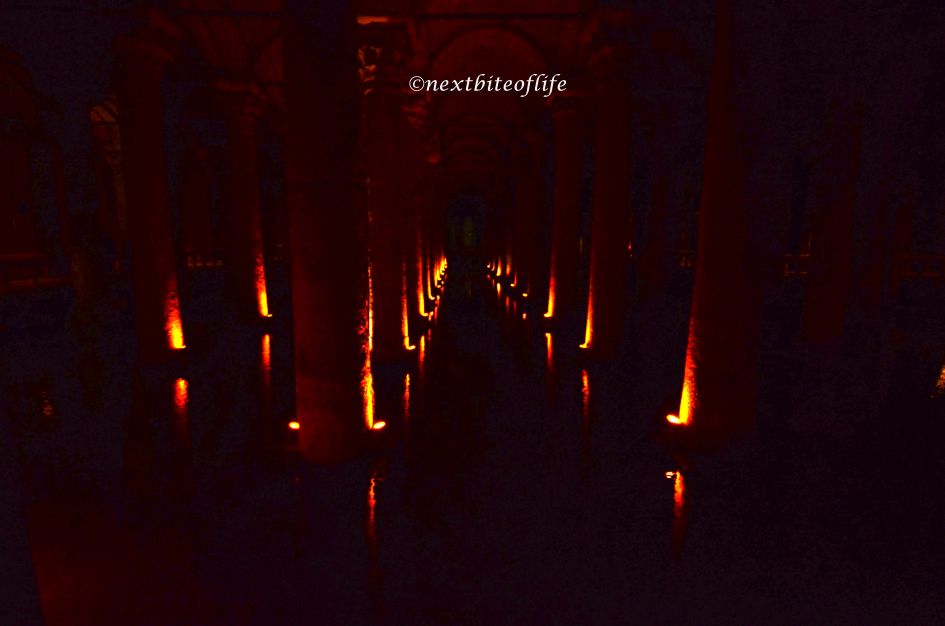 Very serene and dark inside the Basilica Cistern. I think it would be amazing to see a concert here. The acoustics would be insane. 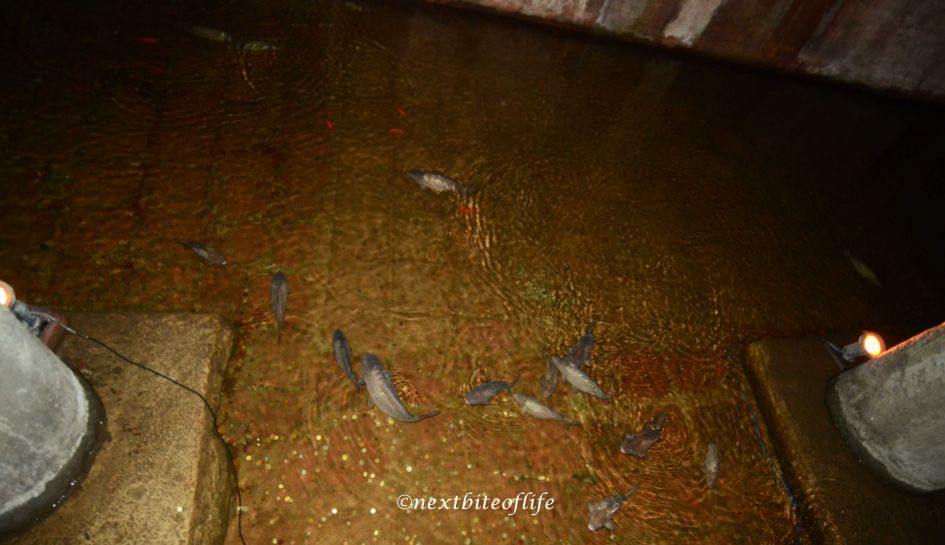 Lots of fish swimming about happily at the Istanbul cistern.. 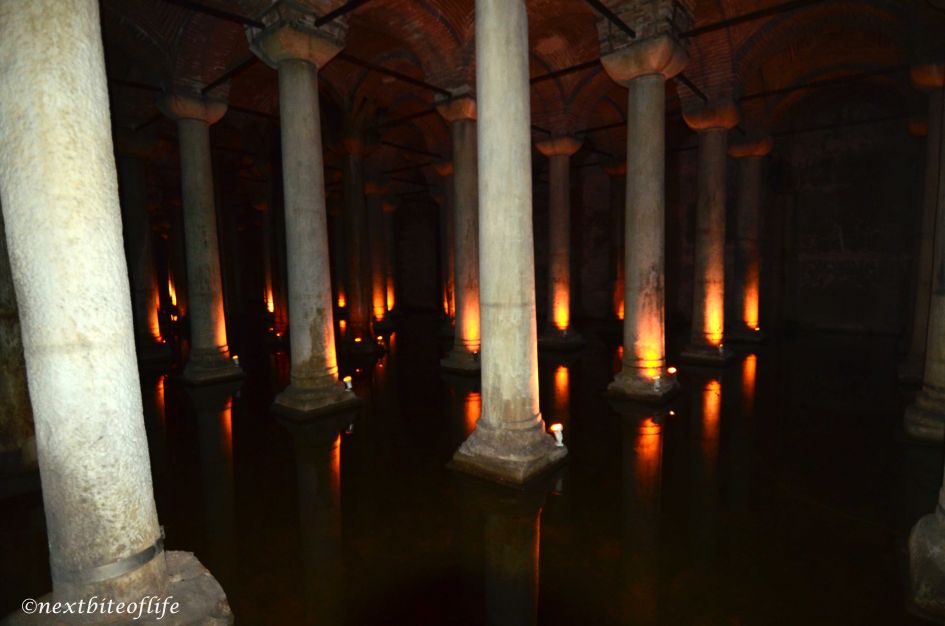 columns in the basilica cistern Istanbul.

If you prefer, you can have a private guided Cistern skip the line tour

I regret that we didn’t have time for a Turkish bath. We had planned on it, but never got the chance, so its something l am looking forward to the next time.

Istanbul is a vibrant and thoroughly enjoyable city. It’s my hope that we get to come back and explore some more because our week was definitely not enough. Like all cities, it has its problems, especially politically which makes a lot of people hesitant to visit.

I think with everything, you need to keep you eyes and ears open and go about your life. There is no guarantee as far as safety. Lots of places in so called first world countries have been, and continue to be prone to terrorist attacks, be it foreign or domestic. Fear really is the mind killer.

Istanbul is a very affordable destination as well. With one dollar ($1) being equal to 5.8 Turkish Lira, you can see that you get a bang for your buck and can afford to a great experience at reasonable prices, making hotel stays reasonable as a result. We highly recommend a visit. There are so many tourist attractions, and of course the food is amazing. 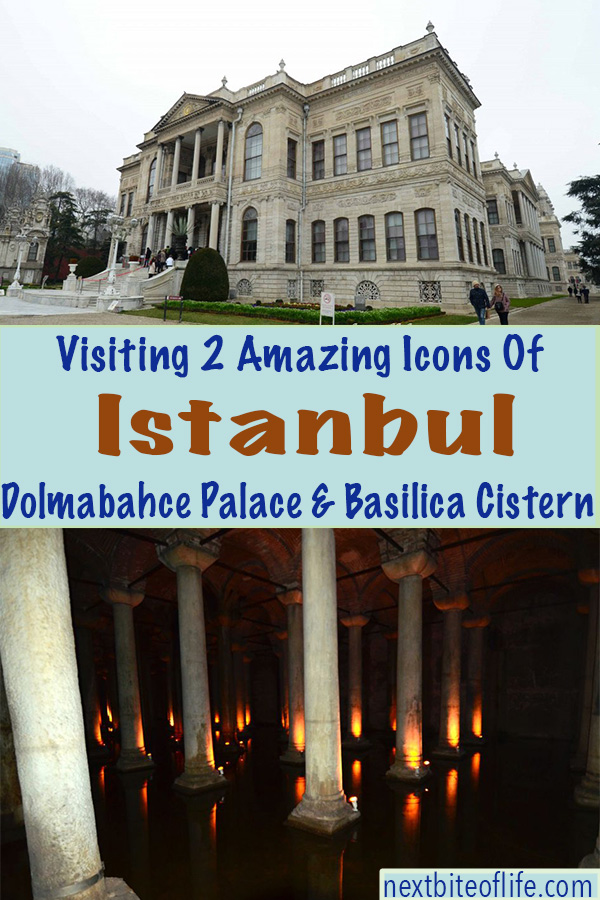 Have you been to Istanbul? If yes, did you get a chance to visit the Basilica Cistern and/or the Dolmabahce palace? What were your thoughts? If not, does it look good?