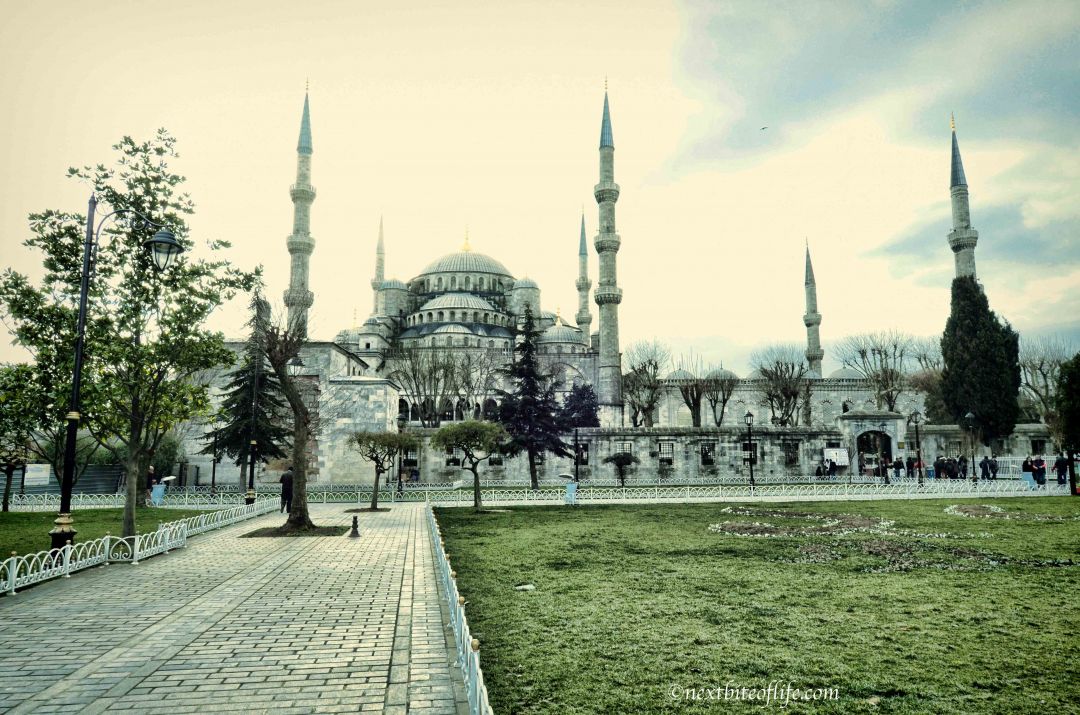 The Blue Mosque is the more common name for the Sultan Ahmed Mosque. It is one of the most historic mosques in Istanbul. It took 7 years to build, and was completed in 1616 during the reign of Ahmed the 1st. The mosque has one main dome, eight secondary domes and six minarets.

The Blue Mosque is truly a work of art in my eyes. We had the chance to see inside of this great building during our trip to Istanbul. I would say this is one of the top 10 things to do in Istanbul. It is historic and the Moorish architecture simply wows! It is intoxicating to think that the ancient Moors once walked in the same footsteps. It’s the same way l feel when l am in Rome and think of the ancient Romans. Living history to say the least. 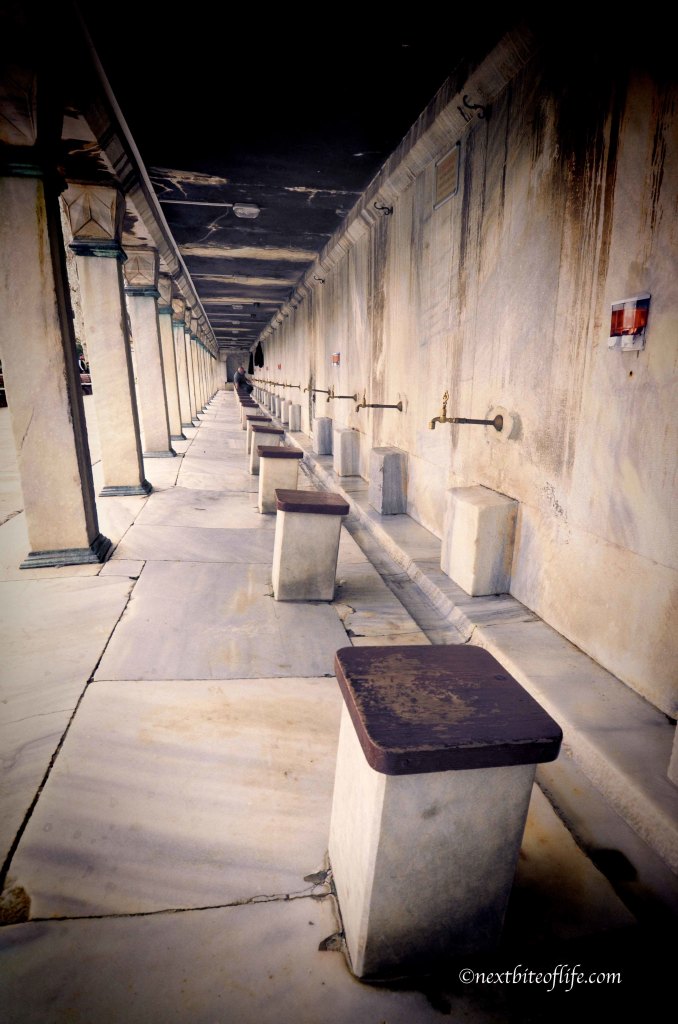 A must visit in Istanbul, the Blue Mosque Sultan Ahmed .This is where the worshipers wash up before entry in to the mosque and you will find this at any place of worship.

The Blue Mosque is located in the aptly named SultanAhmet Square in the old part of Istanbul. One of the sweetest sound to my ears since l was a child is the first call to prayer in the early morning. To me, it signifies the start of a beautiful new day. It was so nice to stand in the square and listen to the call booming from the sound system. It was fantastic, as it was echoed by nearby mosques. 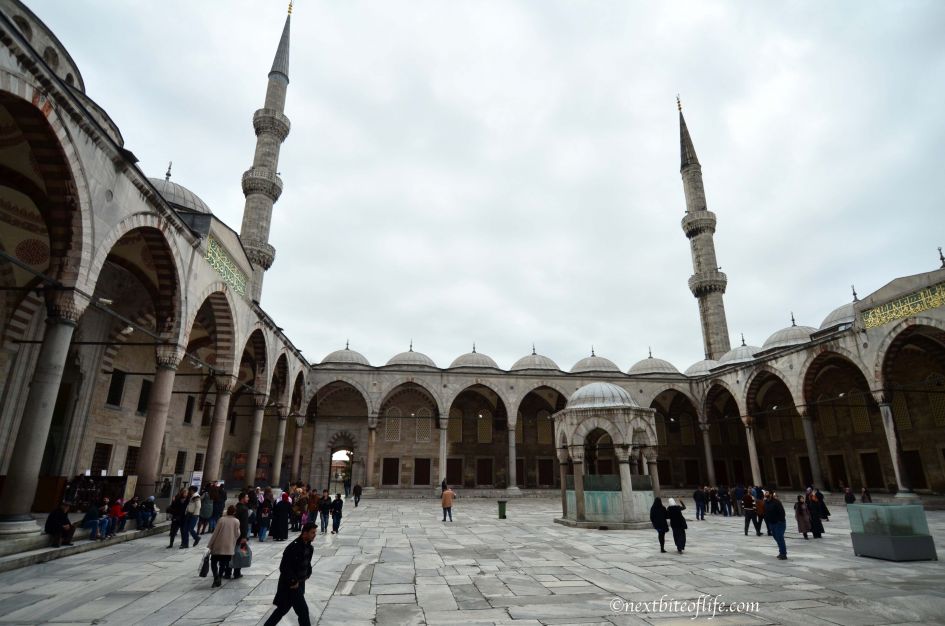 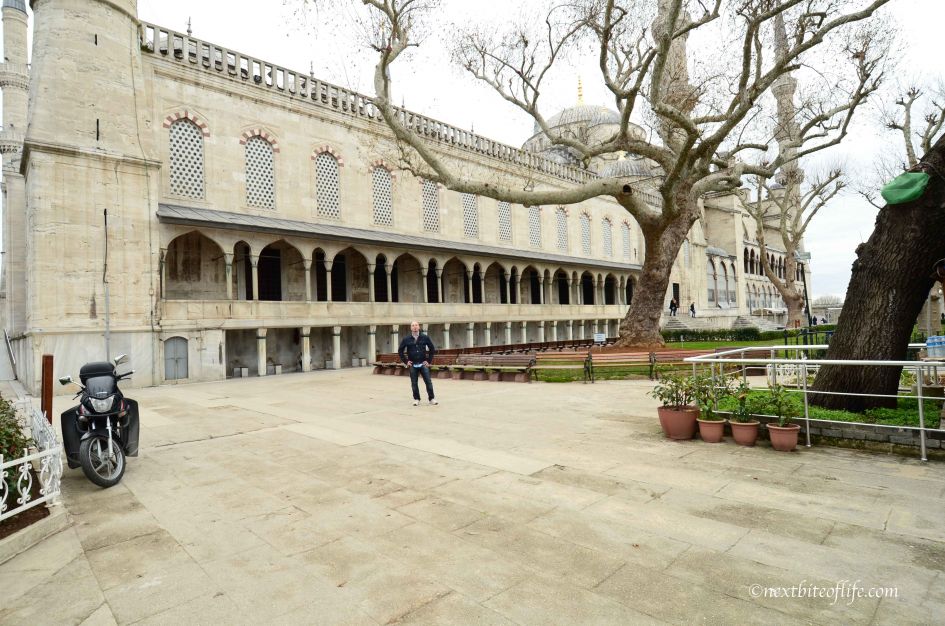 Outside yard – a couple of the trees were so cool! Like the Keebler Elf tree or something from Harry Potter 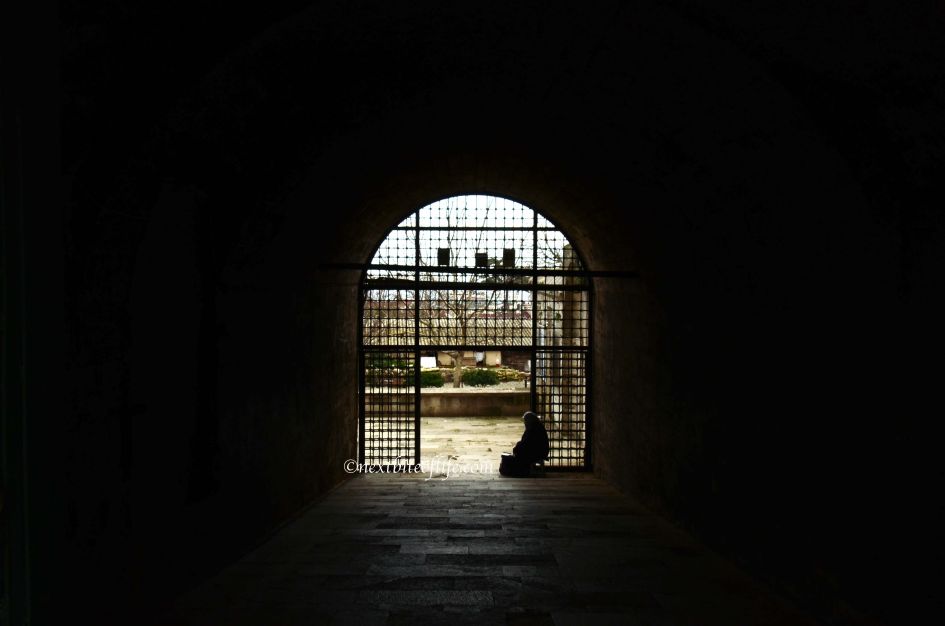 Lone woman hawking her wares. There is a little bazaar in the rear.

Our hotel was pretty close to the Blue Mosque, so we saw it daily, but we actually did not get to go in until the very last day. There was always such a big line that we passed on visiting every time. That last day though, it rained a lot, so there were fewer people. We were thrilled, as l had really wanted to see it.

To get in, you need to remove your shoes, so no holey socks :-) . Your head must also be covered as a sign of respect. They did pass out scarves to people that needed one. I recommend dressing a bit demurely. A couple of girls were denied entry because of their skimpy outfits. It’s free entry, but you are not allowed in during worship. 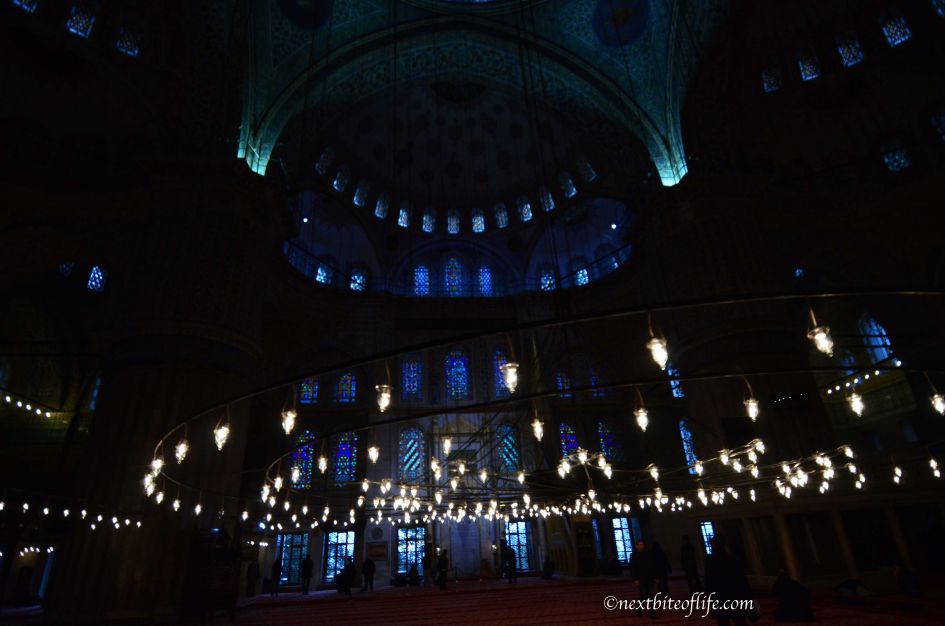 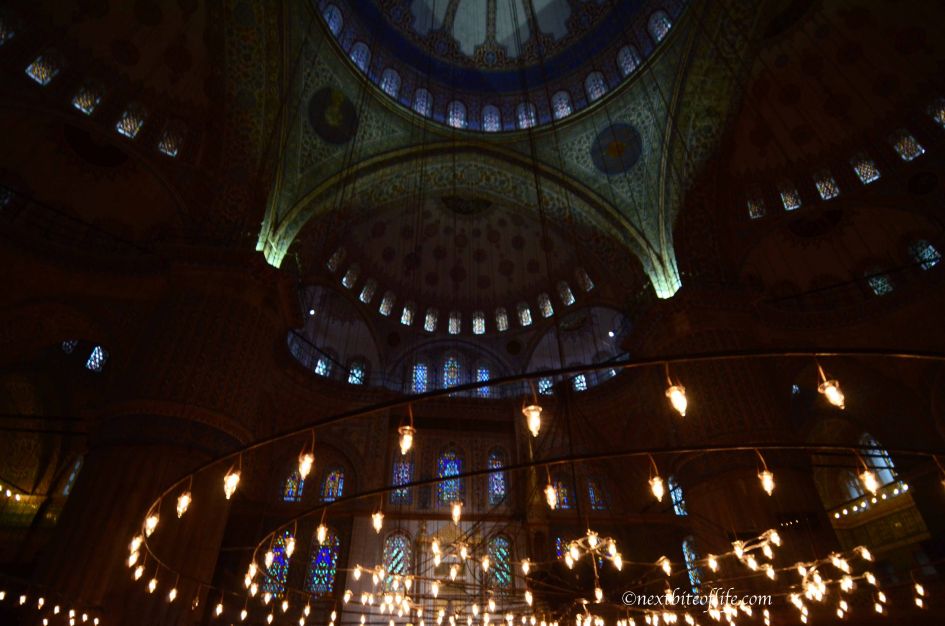 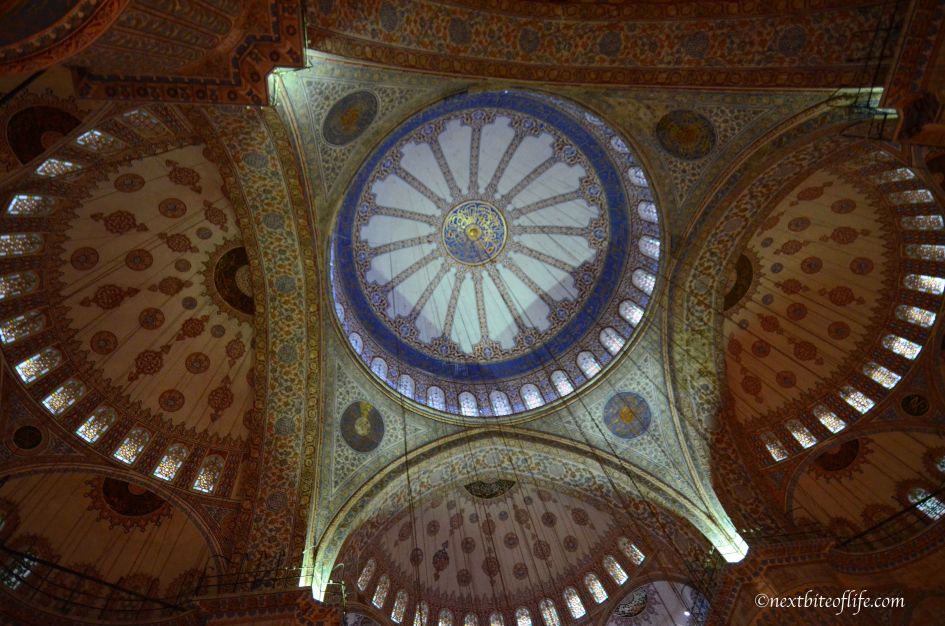 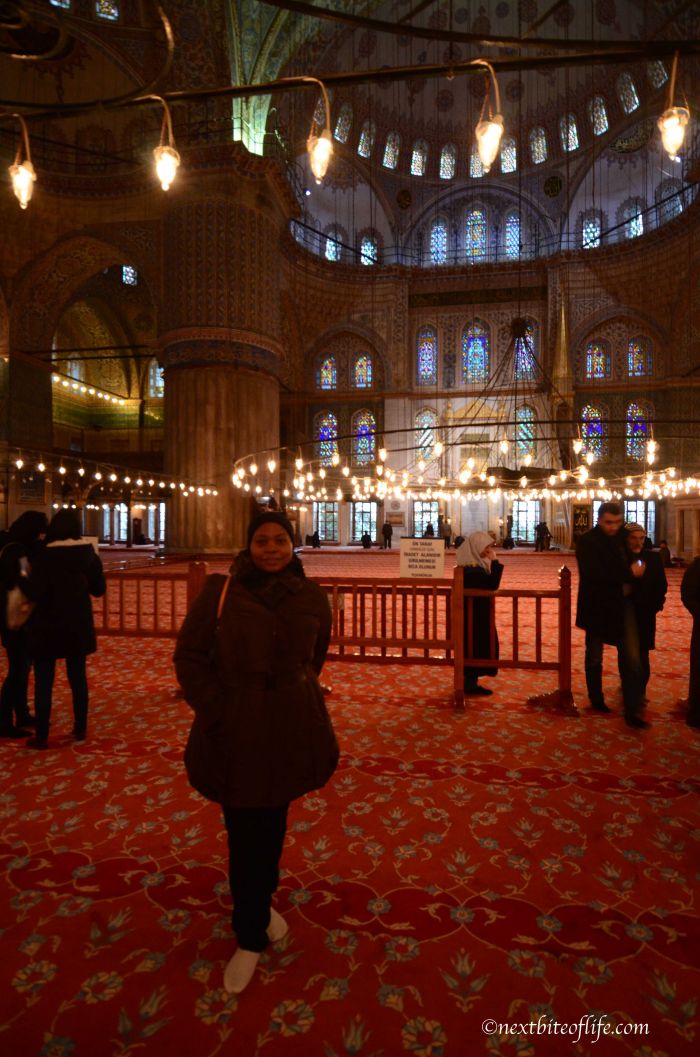 Blue Mosque Sulta Ahmed Istanbul Images: The prayer area is behind me. 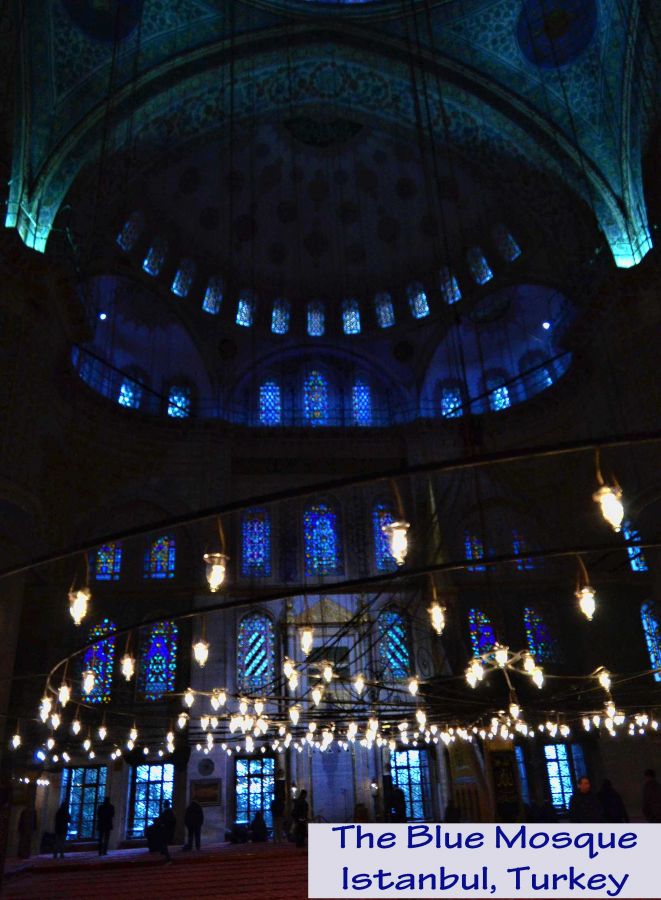 Why is it called Blue Mosque?

The mosque is called the Blue Mosque because of the blue tiles that cover the interior. There are more than 20,000 handmade ceramic tiles in tulip designs, just on the lower level. The upper levels have a lot of blue stained glass windows. It is a bit dark in there, despite all the hanging chandeliers. Everything in this Ottoman style mosque combined gives it a warm cozy feel, despite it’s largesse.

It’s hard to describe, but you feel like it’s just you and God, unaware of the thousands that might be beside you. I highly recommend checking it out if you get a chance to visit the wonderful city of Istanbul. There is a bazaar to the rear of the mosque and if you like high end gear, make sure to check it out, they have great quality knock-offs purchases, better than at the Grand Bazaar :-). It was quite a nice discovery for us.

The shops, both outside and inside, rival the ones at any fancy mall. The goods are designer imitations, but of really high quality. I bought my sister a “Louis Vuitton” bag that looks just as good today (years later) as when l got it and she still gets compliments. I wish l’d bought more stuff to be honest. 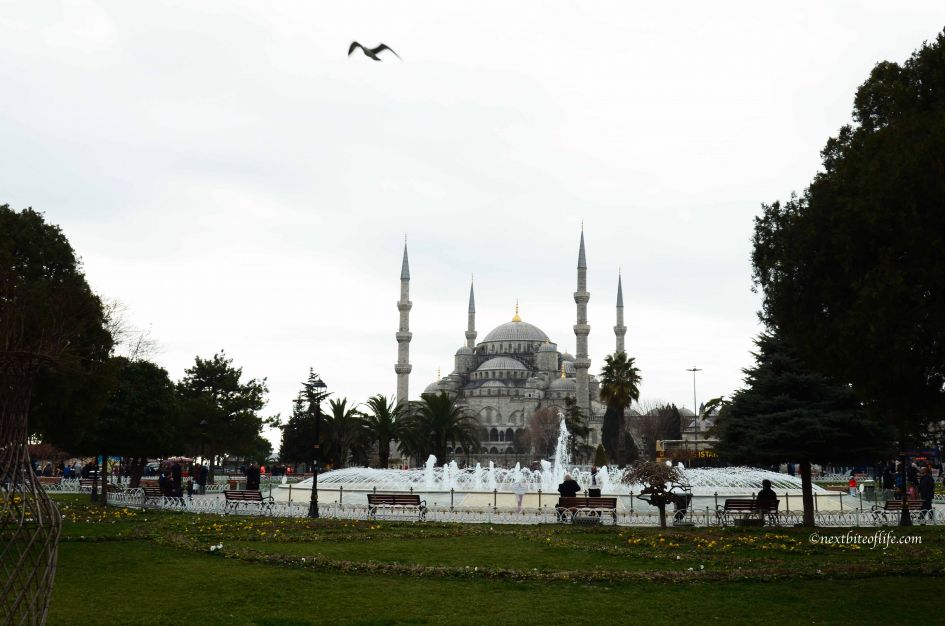 Fountain in the square with the Hagia Sophia view, Istanbul

Since the Blue Mosque is still a functioning mosque, it is closed to tourists during prayer hours. Generally it opens:

Pope Benedict XVI actually visited the Blue Mosque in 2006. He said “May all believers identify themselves with the one God and bear witness to true brotherhood”. With all the troubles in the world right now, it’s food for thought. I think a visit to the Istanbul Sultanahmet Blue Mosque should be part of any Istanbul itinerary. It was a highlight of our Istanbul trip and l recommend it highly. 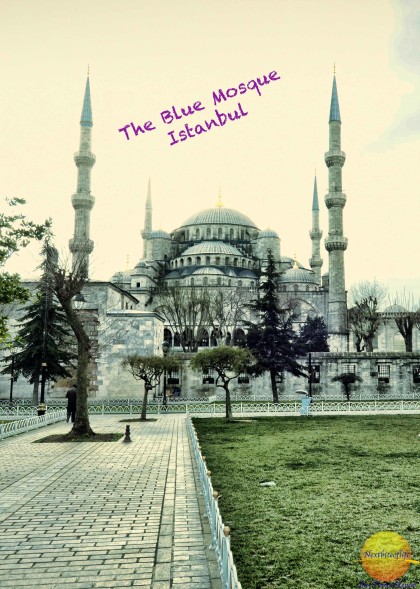 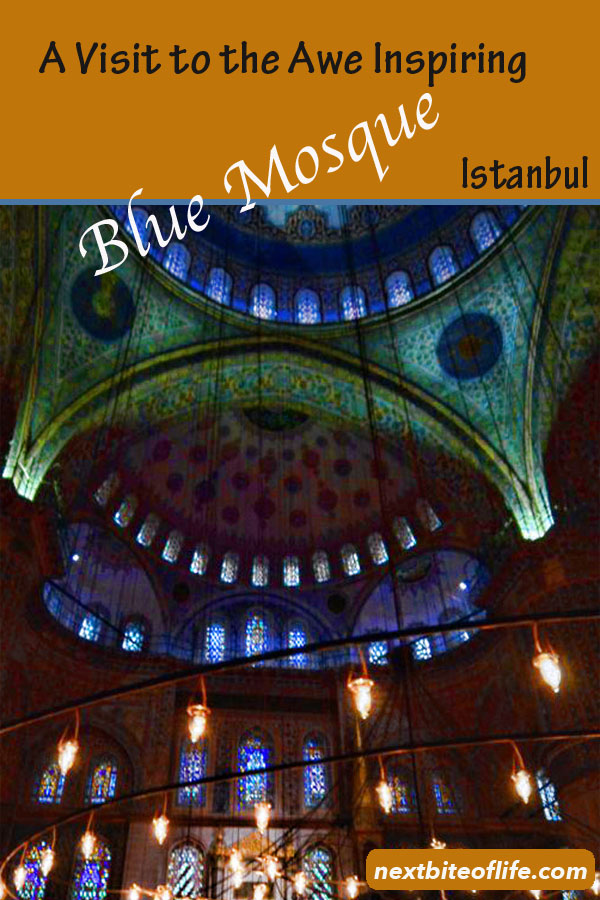