Heurige Adventure In Grinzing Vienna (Miss And A Bullseye!) 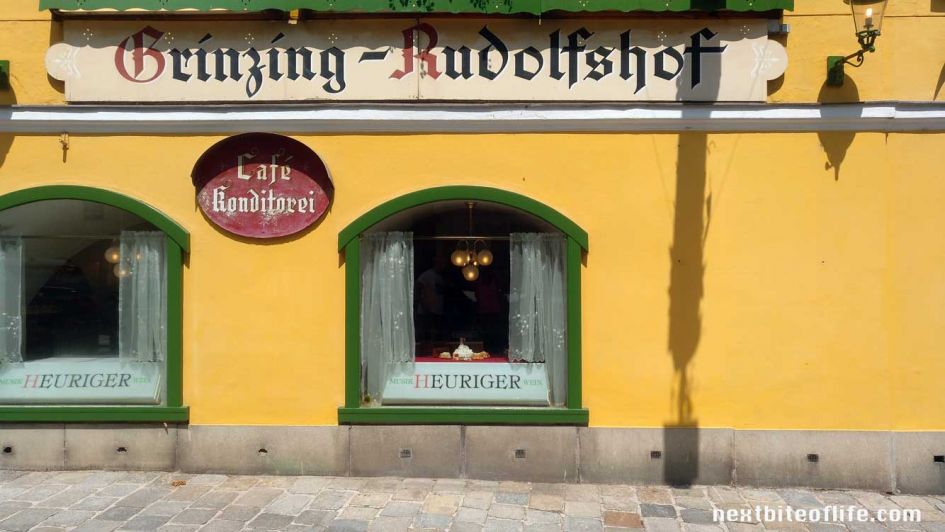 One of the things we had to do in Vienna during the lovely week we spent there was to go on a Vienna Heurigen. Vienna, and specifically the suburb of Grinzing is a wonderful place to experience heuriger. The word heuriger means “this year” in German. Yep! This year as in wine produced last harvest.

Our search for young wine tasting at a local heuriger (tavern) led us on an at first fruitless or wineless endeavor. We chose the DIY route since we were staying in a central location close to the metro. We had just done organized tours in Porto so we wanted a change. It sounded easy enough to do. Famous last words! :-) 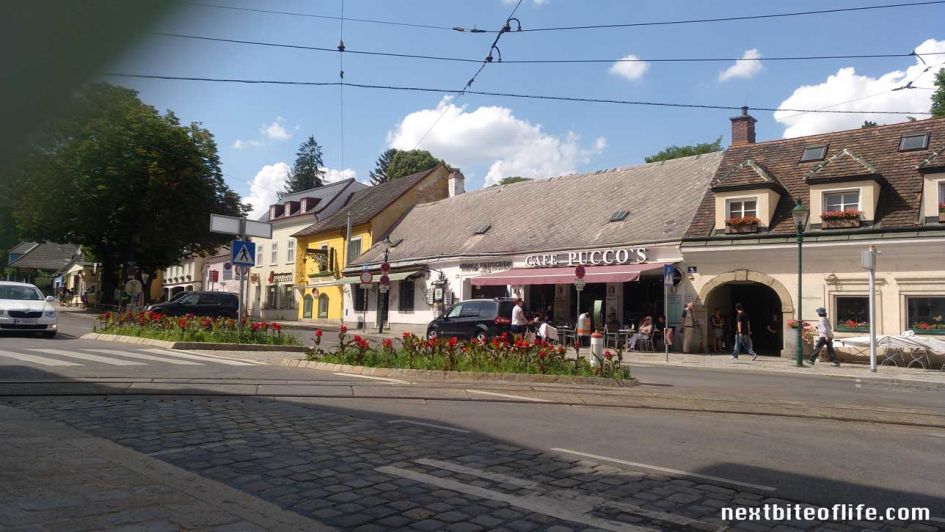 It started out well. Grinzing is a very pretty town. We ended going to the yellow building tavern.

Since the 18th century when the then ruler, Emperor Joseph II allowed wine growers to sell their own cultivated wine and juices in their establishments, heurigen is a very popular tradition in Vienna. It is also very easy to do as the wineries are within city limits. We set out on our hunt to visit one of these Vienna heuriger tavern wine tasting.

Getting from Vienna to Grinzig:

It took us just under 40 minutes to get from Vienna city center to Grinzing. This was accomplished by taking the U4 metro (the station closest to us) to the last stop, which was Heiligenstadt S+U and then transferred to the Bus 38 which dropped us off in Grinzing. Walking around, you can already find some heurigers on the main street. That’s where l made the first mistake. Getting off the bus too soon.

There are about 25 heurigers in Grinzing. I had read about a particular one that had the most amazing views. You were literally sitting in the middle of  the vineyard itself and had an amazing view of  Vienna at your feet. How could l not want to experience that! 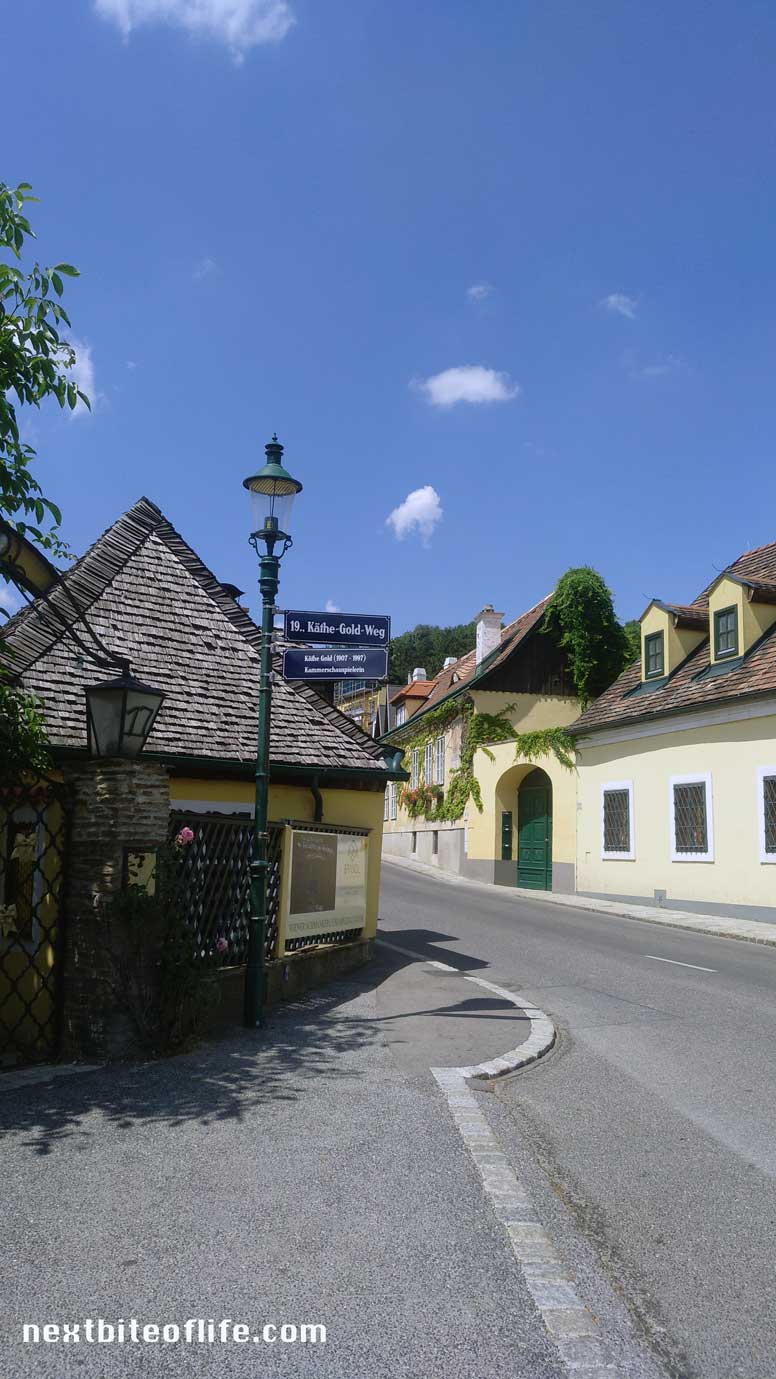 We were still happy, this was still the beginning of our climb. Till the street disappeared :-). The houses were so pretty and what l pictured.

So, of course, l poo pooed the idea of going to one of the first places we saw. Google maps informed me we were just over a mile from the heuriger l wanted which didn’t sound so bad, so we set off. It became pretty clear that we had to work hard for this wine. The whole journey was uphill! Up the freaking hill that never ended, all curvy, barely enough space for a car. We saw no one. It was hot and humid and we consoled ourselves by saying we would really enjoy the wine.

The views were definitely beautiful the higher we got. Federico almost cried when he went to get his cell phone from the backpack to take a picture and found the bottle of water he had put in there just before we left the AirBnB! 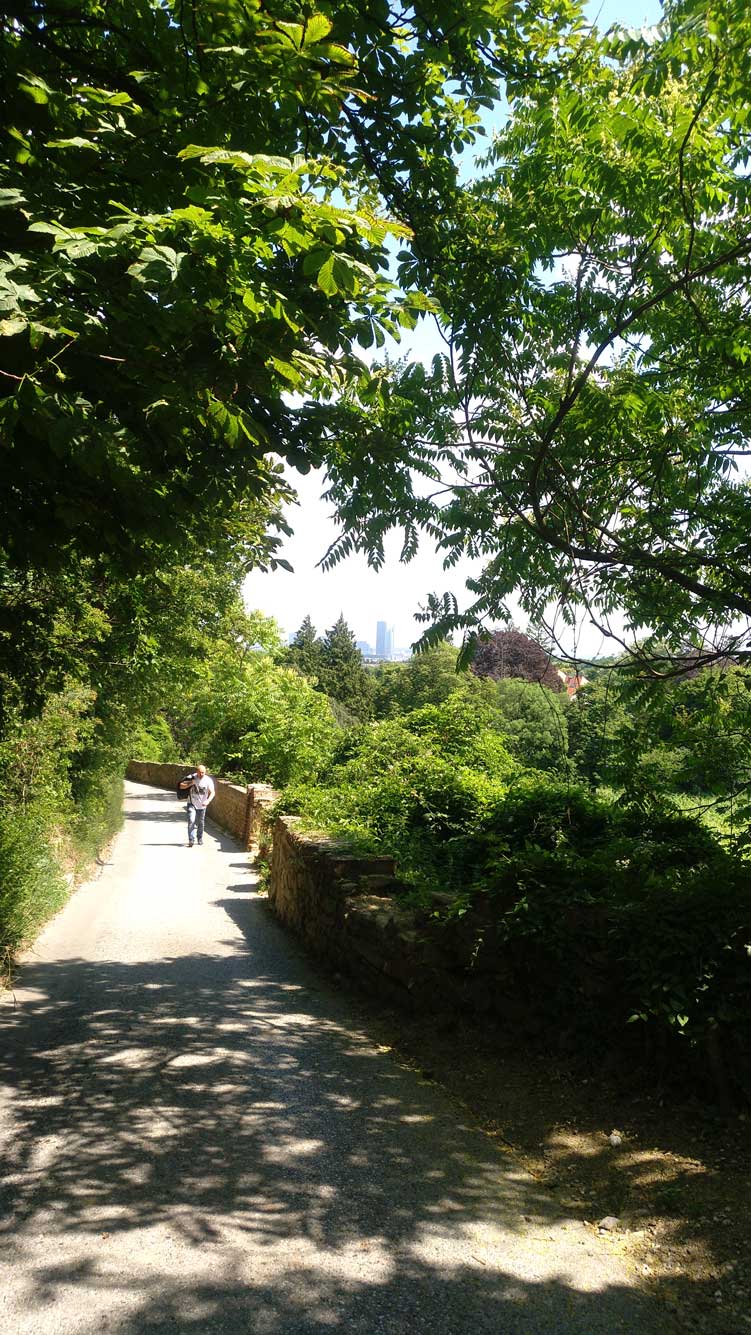 See how far he was behind me. I must have been spurred on by the thought of wine! :-), and the promising views.

We saw no cars on our up the hill in Grinzing, save for one and she was just making a u-turn (probably lost) and her tires were mere inches from our feet. We were going the right way still according to Google map. Finally, it said 350 feet and we were elated. Miraculously, we saw 2 older gentlemen walking down the hill, so l asked if they saw this winery up there. They said yep! they did!!! Woohoo! Looking back, l’m pretty sure those guys thought we deserved to suffer like they did to reach the top! :-). They could have saved us some more walking. 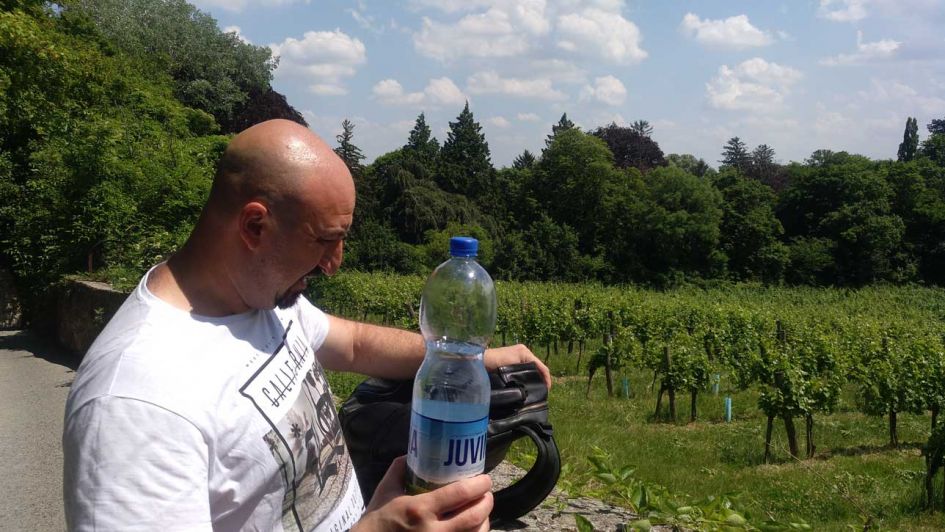 I was never so happy to see water! He forgot all about the camera at this point. 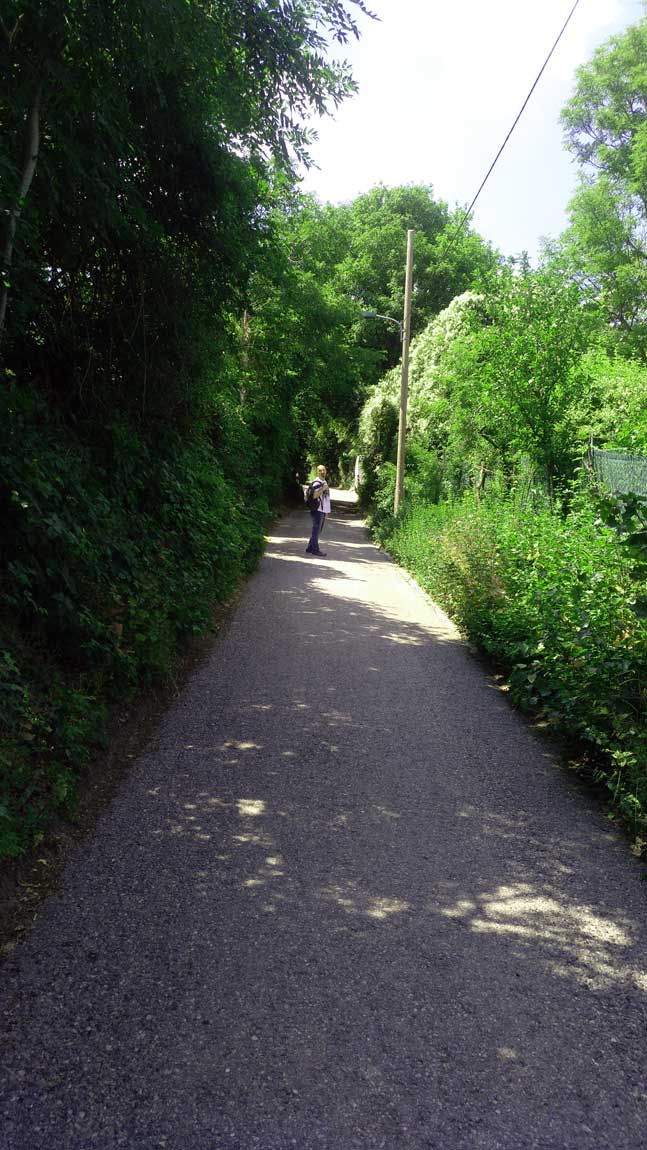 We got to the heuriger drenched, not “perspiring”, we were sweating bullets. It was a hot and muggy day! We heard music from inside and l was ready to finally taste wine. Federico opened the grand door and there was some sort of reception room with a couch, so we sat for a couple of minutes so l could stop my panting and fan myself. Once ready, he opened the door leading to the backyard, and lo and behold..zip! nada…no people, just a cleaning woman doing her chores with loud music on who didn’t hear us come in.

Turns out, it was no longer open to the public and had gone back to being just a regular house! F**K!!! I was stunned to say the least. Federico tried to tell me on the way up that it was just too quiet, but my stubbornness prevailed. Note to self: “Check the dates blog posts are written and double check that the information is still current”. :-) 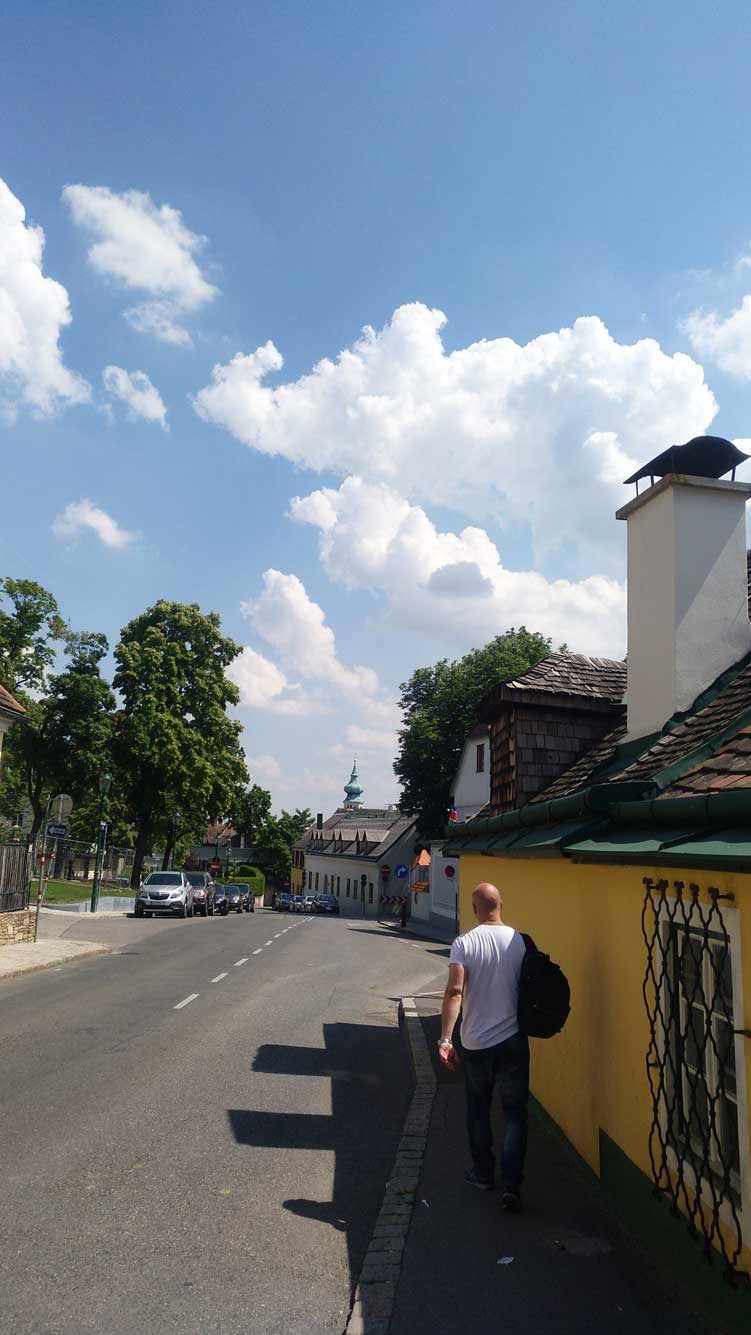 What goes up must come down..walking back towards Grinzing.

It wasn’t so bad walking back down. We were now super hungry and thirsty. We ended up at one of the very first heuriger places we had seen called Zum Martin Sepp :-). The heurigers are very airy, all wooden benches and tables, with trees offering shade. Our wine tasting consisted of 5 young wine varieties, from white to red. It’s served on a tray and tells you in what order to taste them. It also gives a little information about each wine (in German and English). 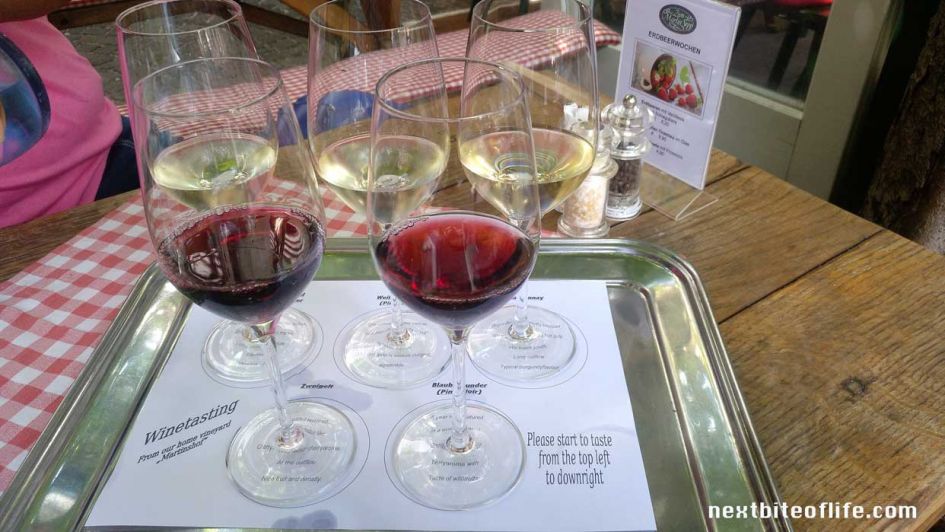 At last! Nectar of the gods! How sweet it was :-). The first was the bomb! Generous pouring and €9.50 ($11) for the tray of 5 samples per person. This was more than enough for us, no heuriger crawling for us! 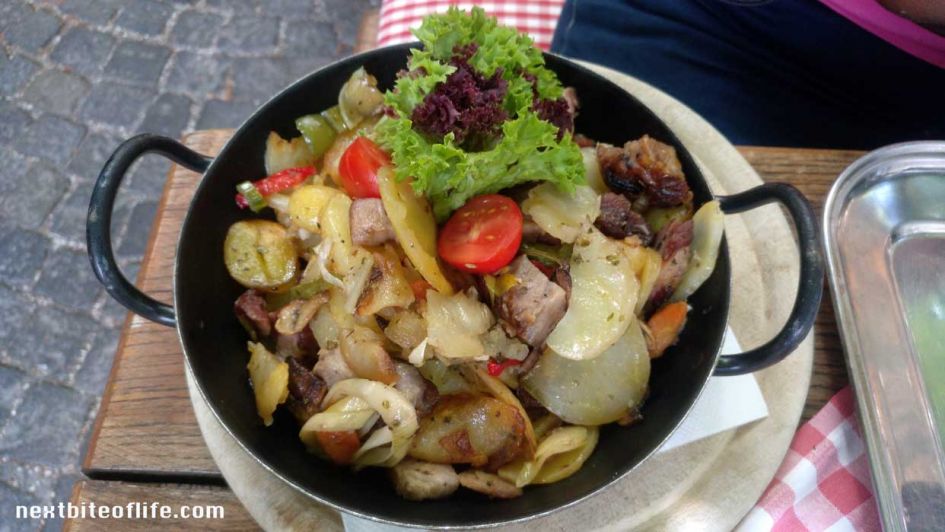 My big bowl was simply fantastic..lots of sausage and potatoes…and some other stuff and a side of the best cole slaw looking stuff ever. 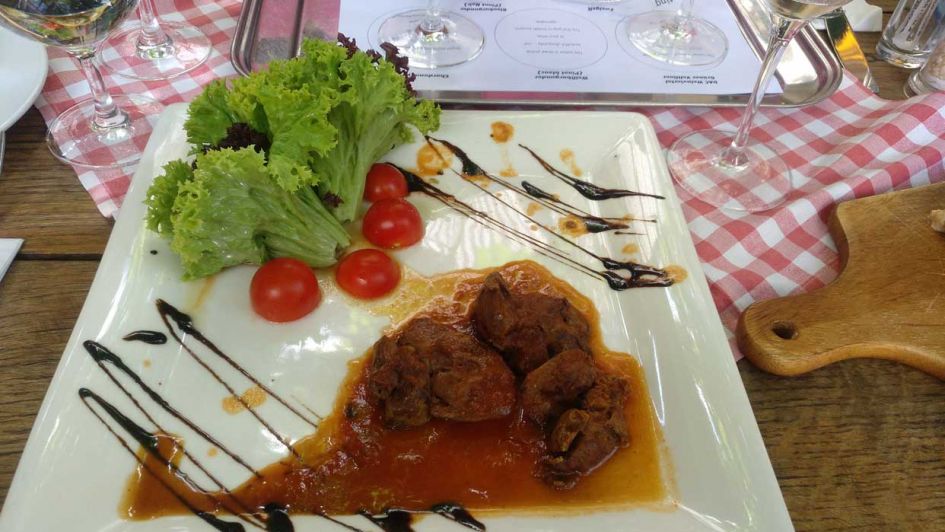 Federico had stewed liver. It was delicious but felt it was too small a portion. 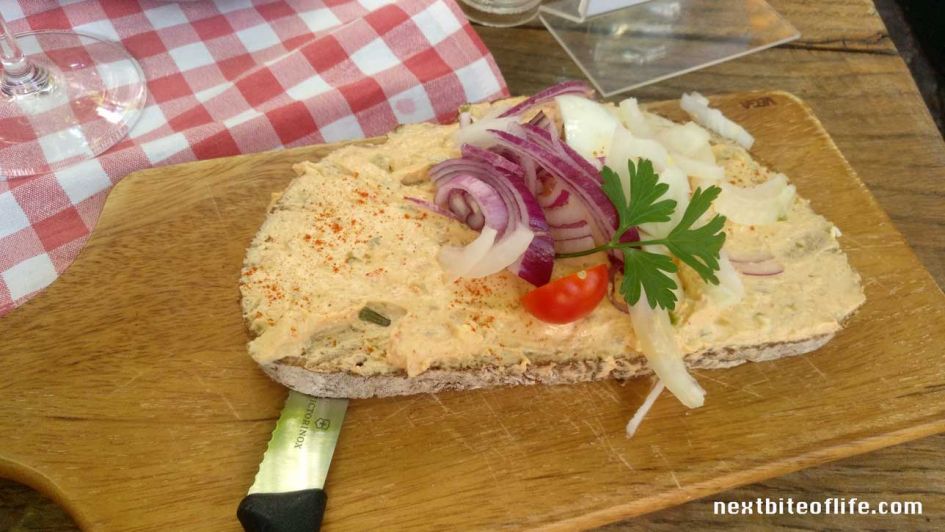 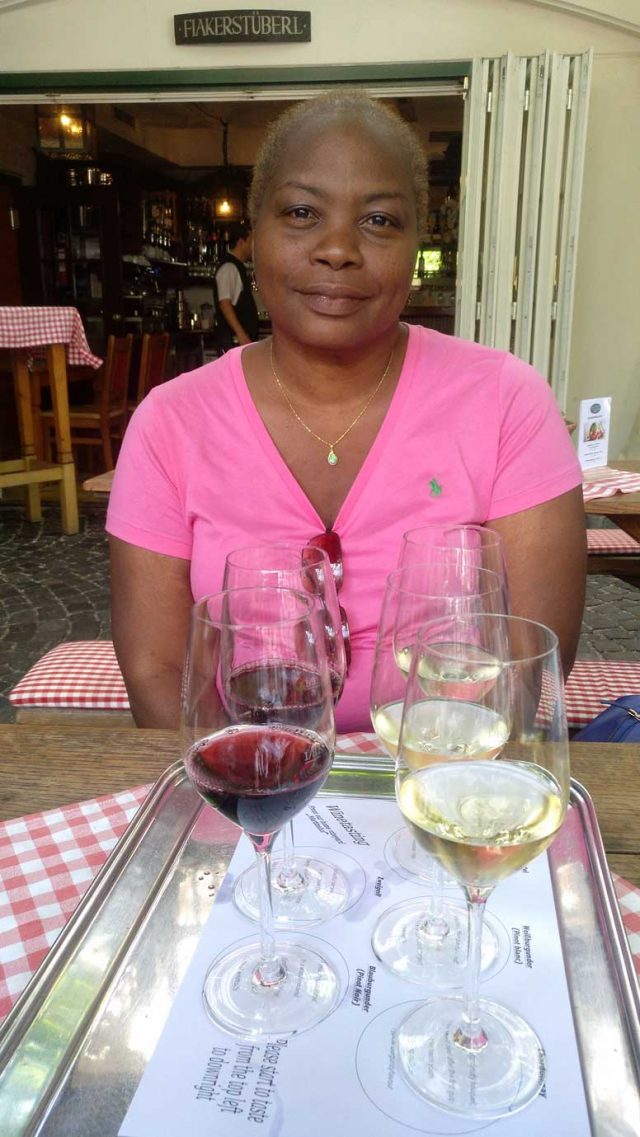 I was hot and bothered, but happy. It was worth it..thank god l had comfy shoes on :-). You just gotta laugh and move on.

Simple food is what it’s all about, cheese and cold cuts galore. We had our heurige a la carte as opposed to the buffet and it was absolutely wonderfully delicious (and not just because we were famished). There was no live music when we visited, but l understand that it is a common occurrence in most taverns.It’s amazing that Vienna is a wine-growing capital city. You can indulge all you want and be back in the city in minutes, which is pretty cool. We liked one type of the wine so much, we bought a bottle to drink later. Here’s Rick Steves doing a heurigen,  When in Rome…

If you’re on a Vienna vacation, you should definitely make a heurige tour part of your Vienna itinerary must-do. It was fun, even with our mishap, but hey.. I can tell you where the Namibia embassy in Vienna is :-). We highly recommend doing young wine tasting in Vienna. 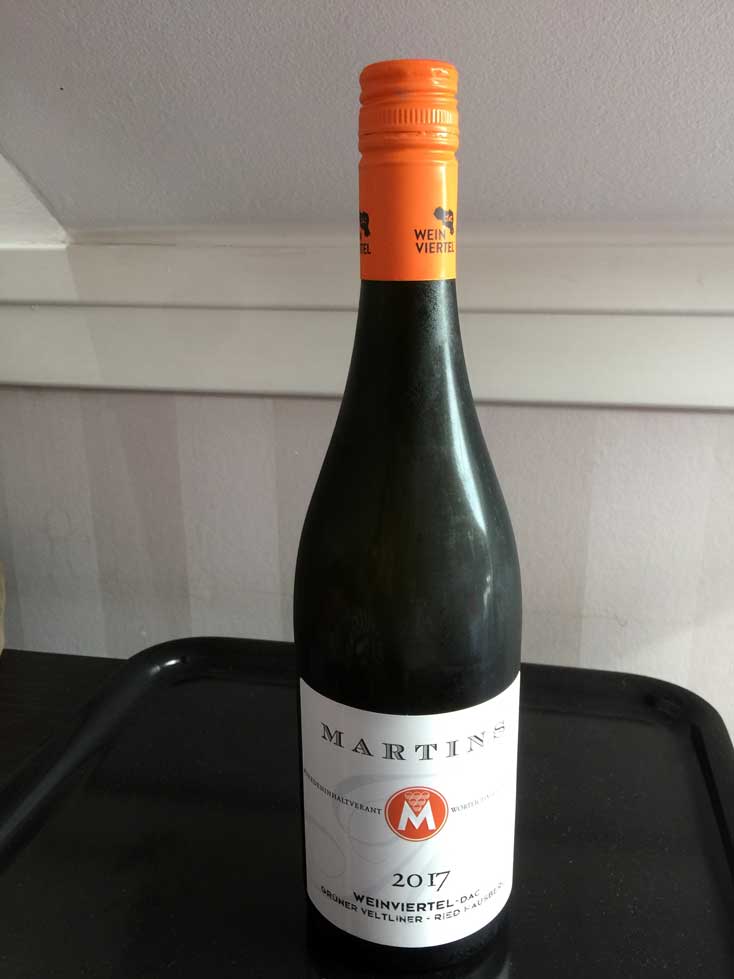 The young ‘un we brought back from Grinzing, and it was good :-)

Heurigen in Vienna was a wonderful and memorable way to finish out the week before we headed back to Prague, with me hoping the city would grow on me despite my first Prague impressions . Prosit! 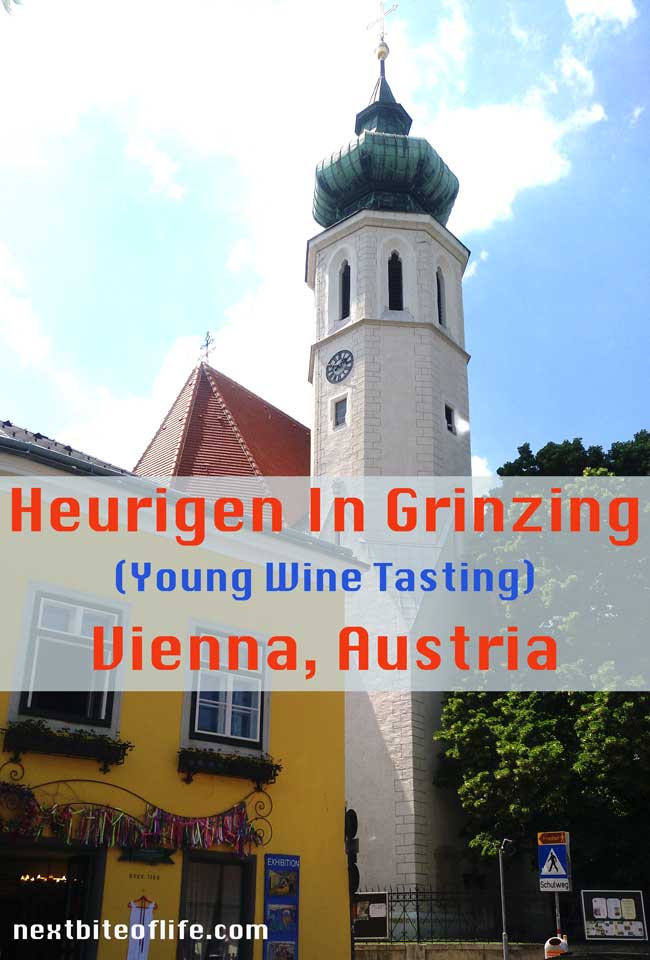 In search of young wine in Grinzing Vienna!

Have you been to Vienna? If so, did you experience a heurige and did you like “young” wine, or are you a wine snob?