Food Tour In Rome With The Roman Guy Is Excellent 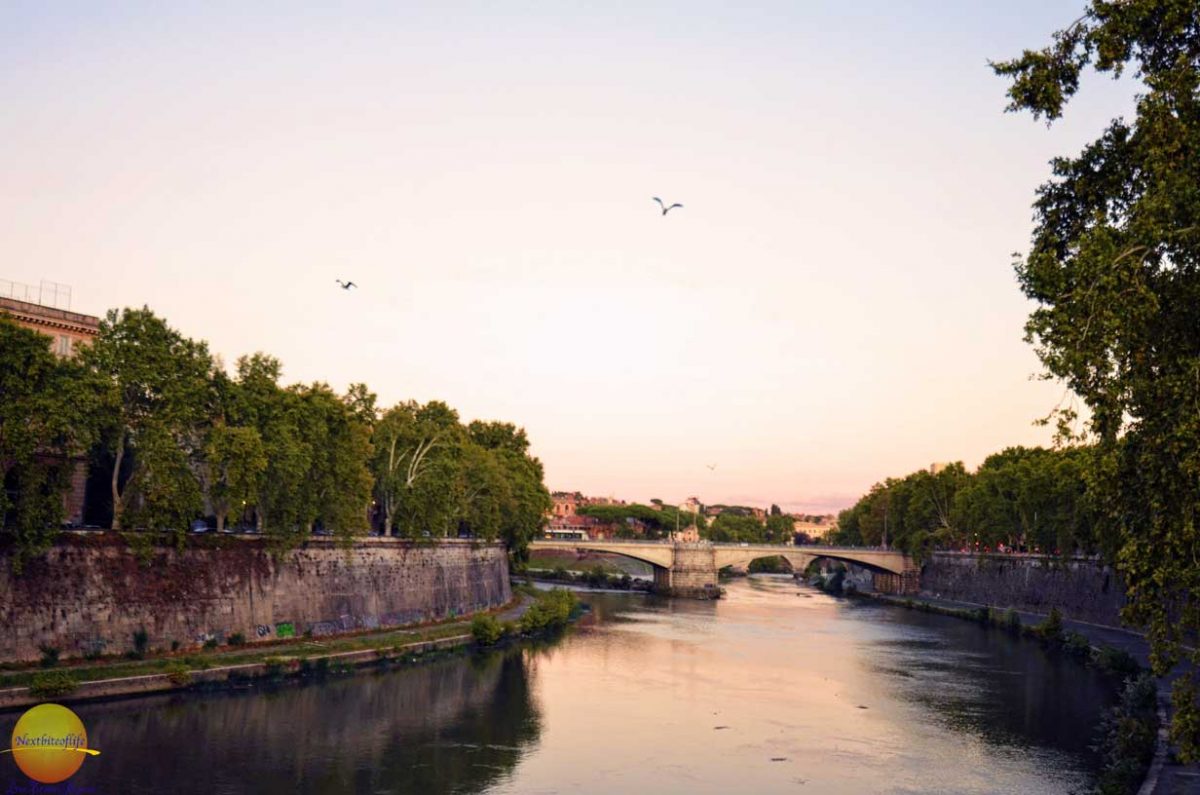 Our Rome food tour with The Roman Guy recap.  We always return with good memories and this time was no different. We were delighted to visit family, revisit old favorites as well as discover new ones. On this particular visit, we were also able to have a unique experience courtesy of The Roman Guy Tours.

This Rome food tour was an awesome way to sample some of the best Roman food and drink. Being used to homemade Italian food, I am very fussy about it when we dine out. I am happy to say that this Rome food walking tour is definitely recommended by yours truly. Here are reasons why this is a great food tour in Rome and should be on your must do list on your visit.

Trastevere Food Tour in Rome with The Roman Guy: Why do it?

Any visitor to Rome surely puts food high on their list of things to do. After all, Rome is known not only for their history, but for their cuisine which is popular all over the world. Being in Rome gives you a chance to sample the truly authentic Roman food. It’s very easy to fall prey to the overpriced eateries that surround the popular sights such as the Colosseum and Spanish Steps.

I’ve heard people complain of the food eaten at such places as being truly horrible. Of course they are. They are pandering to the masses and are just in it for the quick money. This is where The Roman Guy and their Best Rome Food Tour comes in. They take the guesswork out of the equation and take you to the little gems, even in the popular areas. A walking food tour should be on your list of things to do in Rome. 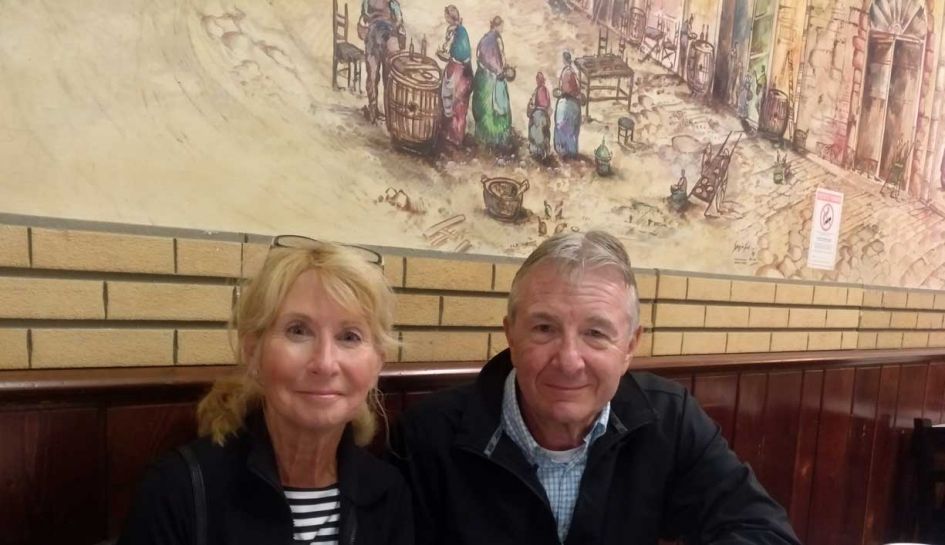 One of my favorite things about The Roman Guy is the fact that they only do small group tours. Maximum size is ten. This makes it really easy for the guide to communicate with everyone and keep track. On our particular tour, we actually had a group of 2 other couples aside from us. It was a perfect size and we became fast friends by the end of the evening. It turned out that each couple were from the States as well so we never ran out of conversation. One couple had just gotten off a cruise ship while the other couple were just out to discover Italy on the whole. 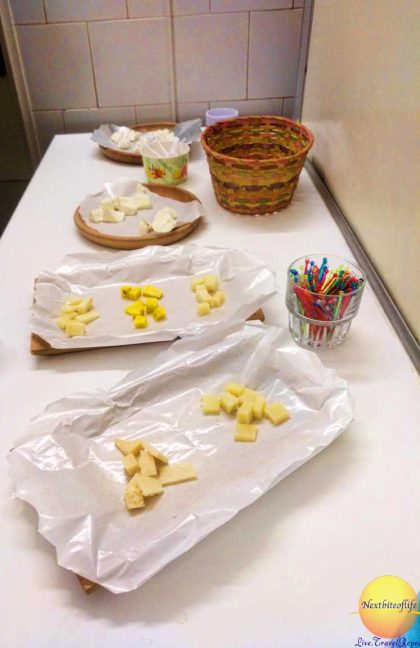 Our sampler plates at the start of our walking and eating tour of Rome.

Our guide Luca was an awesome one. He was prompt and we set off on time. We met up at a plaza that was in the Campo de Fiori area, a neighborhood l have written about previously. Our first stop was to sample some yummy Italian cheeses at a little shop. The store actually has no name :-). Its reputation sealed over the years, there is no advertisement of any kind, just a door and rows of cheese. In the back room, we were able to sample seven different kinds of cheese, including: Pecorino Romano Cheese (with a spicy kick), real Parmesan, Burrata (firm on the outside and so soft and creamy on the inside.

Burrata is my favourite and l love the fact that we can find it in the grocery store here in Spain), Buffalo mozzarella (Federico’s favourite. He could exist on just this alone. I like it too, but love the extra step that makes it burrata),  and aged Sardinian cheese. There was also a saffron flavoured one which just tasted so delicate. All tastings were accompanied by some prosecco between tasting to cleanse the palette. The history of each type of cheese was described to us by a very knowledgeable Luca. The ageing times ranged from one week to one year for the ones we tasted. 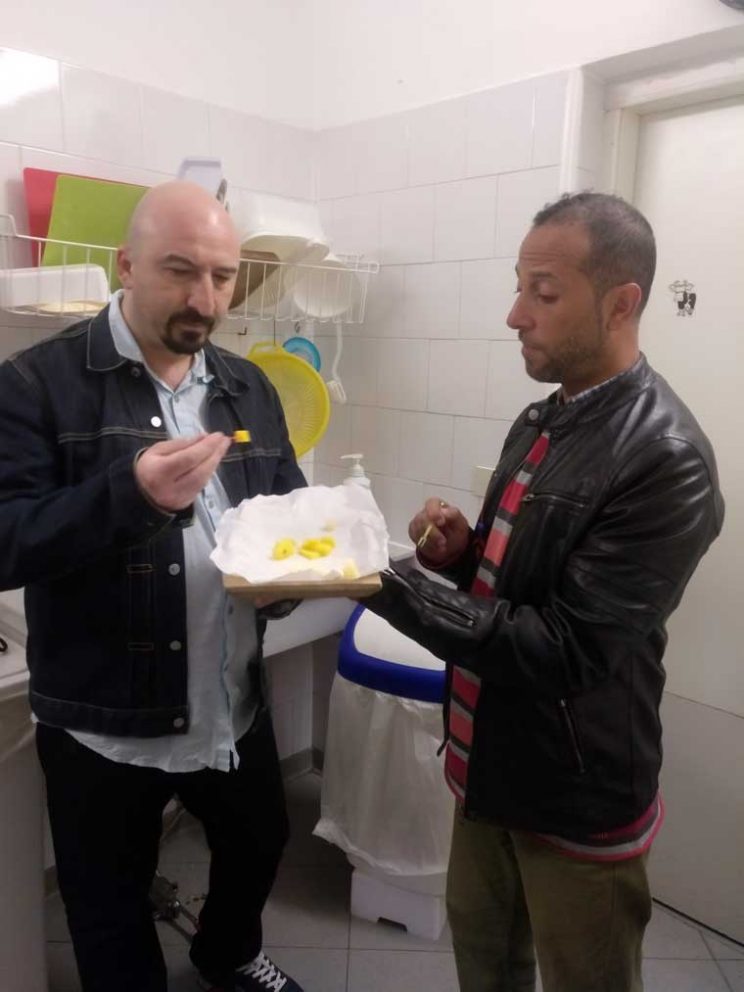 Federico doing some cheese with saffron sampling with Luca, our guide at the beginning of our Rome food touring.

Baccala in Rome is a must! 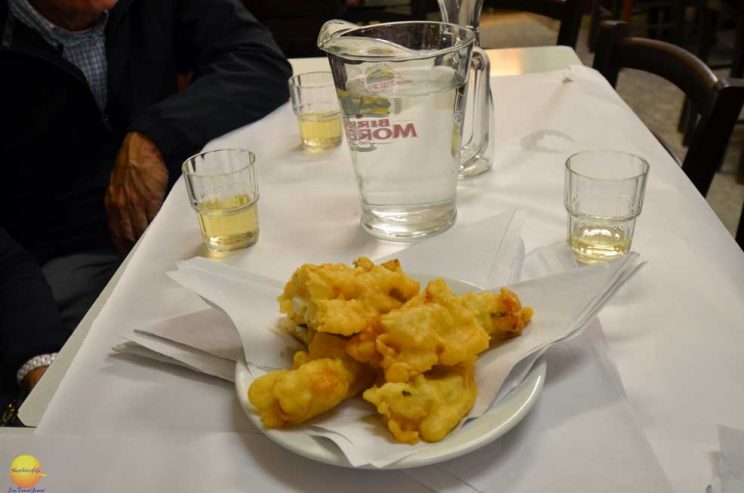 So good! Absolutely delicious and in my opinion, the best baccala in Rome after sampling many.

From there it was on to my absolute favourite part of the tour. Baccala is one of the most popular street food snacks in Rome. It is deep fried cod fish. Long time readers of the blog know l have mentioned this particular place before. It is just a tiny little shop that specializes in this delicacy and it’s not unusual to find lines snaking around the little square when they’re open. No need to sit, just get yours and eat as you walk.

We were there with this guided tour (another advantage of being with The Roman Guy, the welcome mat) and were ushered to a saved table. We were served piping hot baccala and we tucked into it properly, along with some more wine. Trust me when l say this is something you need to eat in Rome. It’s simply mouth watering and so, so delicious. Flaky on the inside and the outside is crunchy. I’ve had baccala in Spain and in Portugal, but prefer the way it is done at this tiny hole in the wall place. 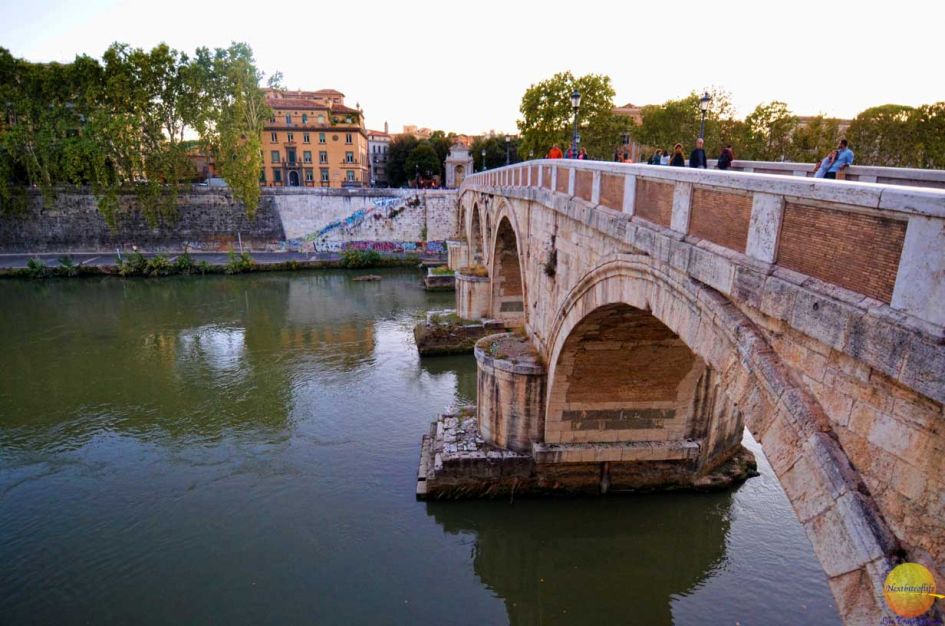 Our next spot brought us to the Trastevere area, one of the liveliest and picturesque areas of Rome. Crossing from the Campo de Fiori area, you cross the Ponte Sisto bridge. Despite the fact that l had crossed the bridge quite a few times, I had no knowledge of its history. This was righted by Luca and his history lesson which l enjoyed thoroughly.

Bruschetta in Rome on a food tour: 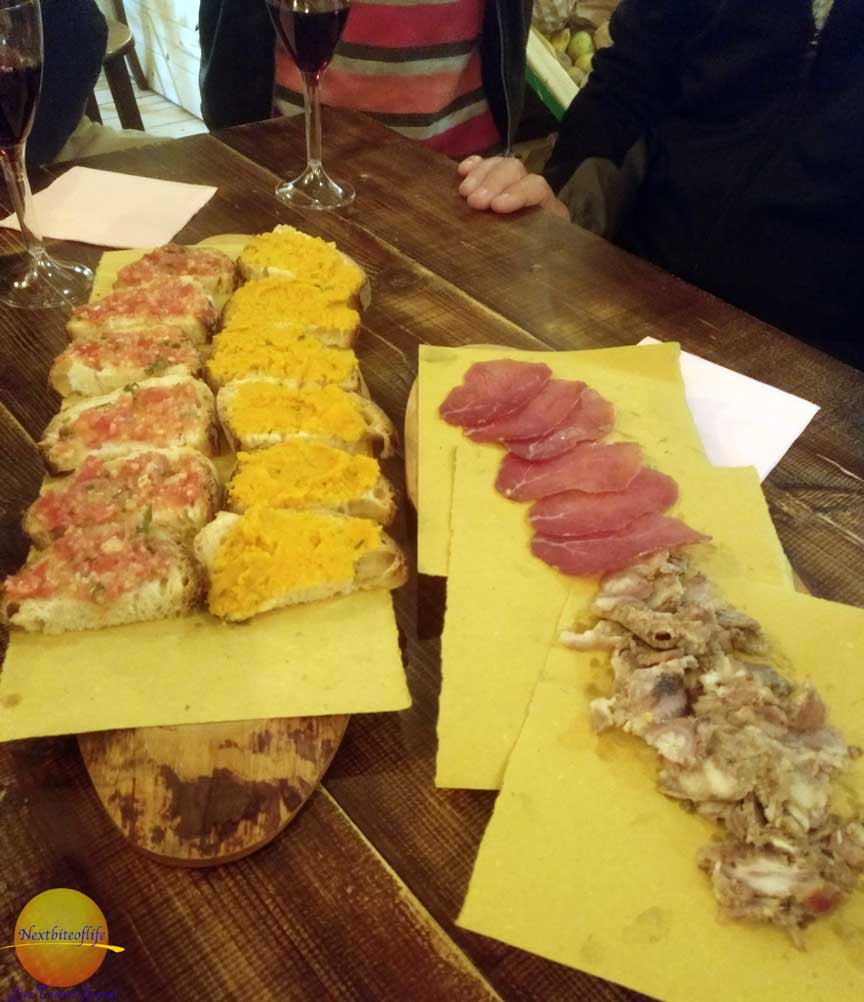 The coppa was so tender and good. It’s made from various pork muscles. We definitely had amazing food on our Italy food tour in Rome

What is Bruschetta? It’s simply an antipasto (starter) of toasted Italian bread with various toppings. Our next stop was to an antipasto place where they only served organic farm to table foods. From what l understood, the offerings change daily depending on what farm products were delivered. On this particular evening, we had bruschetta with carrot and also the traditional tomato one.

I had secretly hoped for the more traditional Roman one which is simply rubbed garlic, salt, pepper and olive oil on plain bread. I shouldn’t have worried as it was on the menu down the line. All this with more wine of course! We also had helpings of prosciutto and Coppa (pork cold cut). 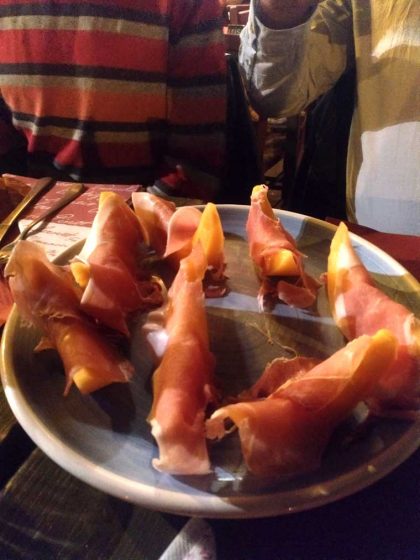 Prosciutto with melon, one of the many appetizers we had on our Travestere food tour.

Trip insurance is a must. Get your quote here from World Nomads.

Pizza: a must on Rome tours 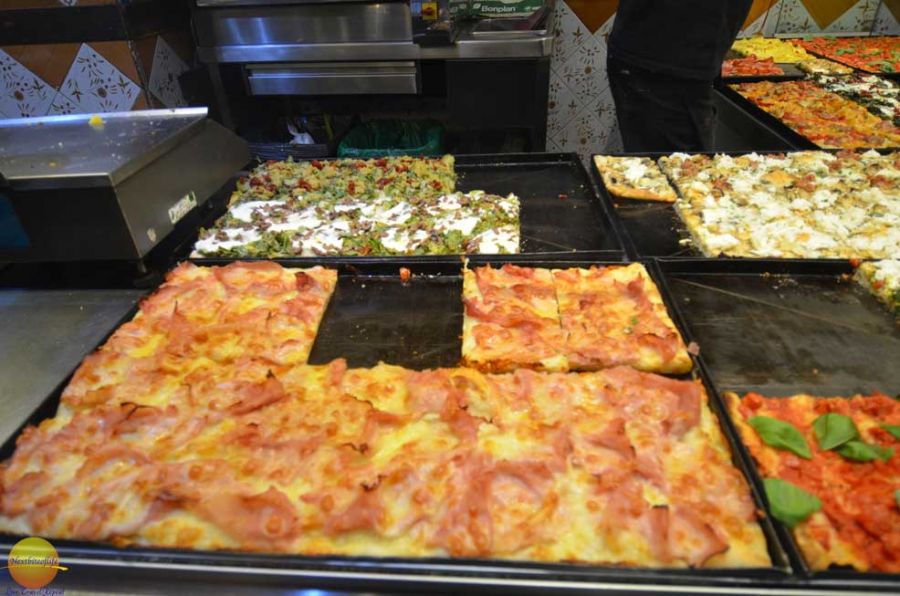 Rome food tour offering: So many types of pizza :-). Definitely one of the best food tours in Rome.

Since you can not mention Italian food without mentioning pizza, it was a no brainer that we had to go by a pizzeria. This pizzeria is famous for the delicious variety of its pizza al taglio which means by the cut. We sampled a couple, the classic margherita – plain with tomato and mozzarella, the other with potato and rosemary. I didn’t have any as l was full by then :-).

Federico was more than happy to eat my share and said the tomato one was one of the best he has had in his life. That’s saying a lot as he loves pizza. The only complaint l heard from the other couples was that the portions could have been bigger, so small disappointment there. Someone requested a third kind and Luca got it for her. 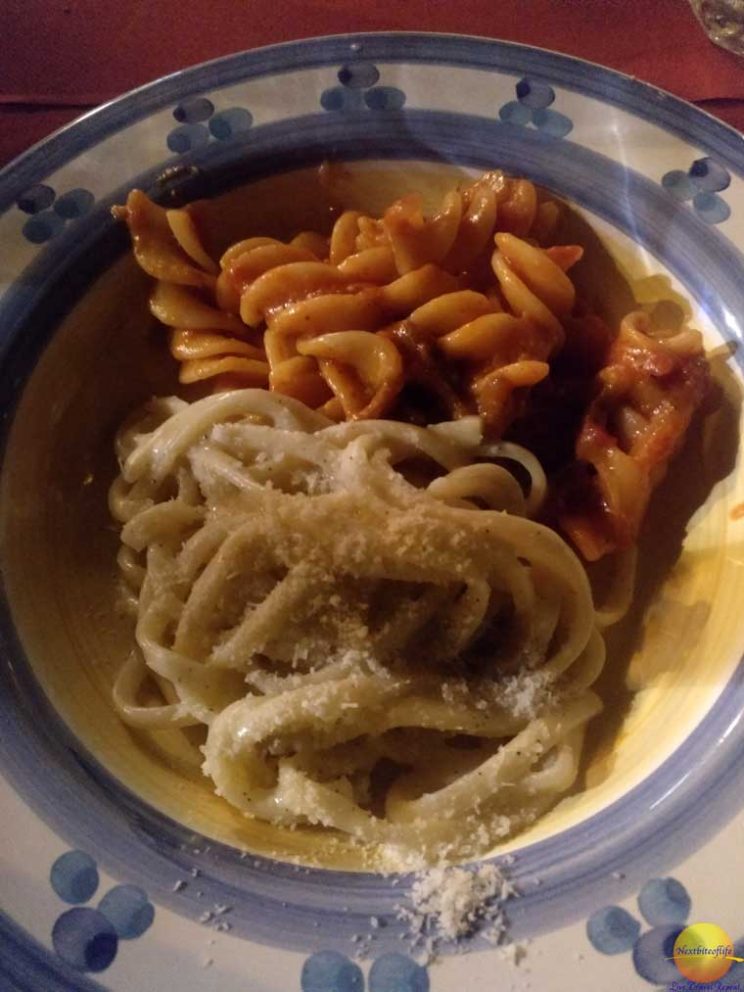 Fusilli Amatriciana and Tonnarelli Cacio e Pepe, just some of the yummy food we had on our Roman food tour.

Our next stop brought us to a very popular and crowded restaurant in a plaza right in the center of Trastevere. Once again, we had a reserved table on the outside patio. Along with wine, we were served a dish containing two types of pasta. Along with this, some more bruschetta (including the Roman type), Crostini and Prosciutto melon (love it). You can imagine how completely full l was by then. I think all the women were, but the men looked like they could have eaten more. The good thing is that you could ask for seconds, but l could barely finish what was in my plate. 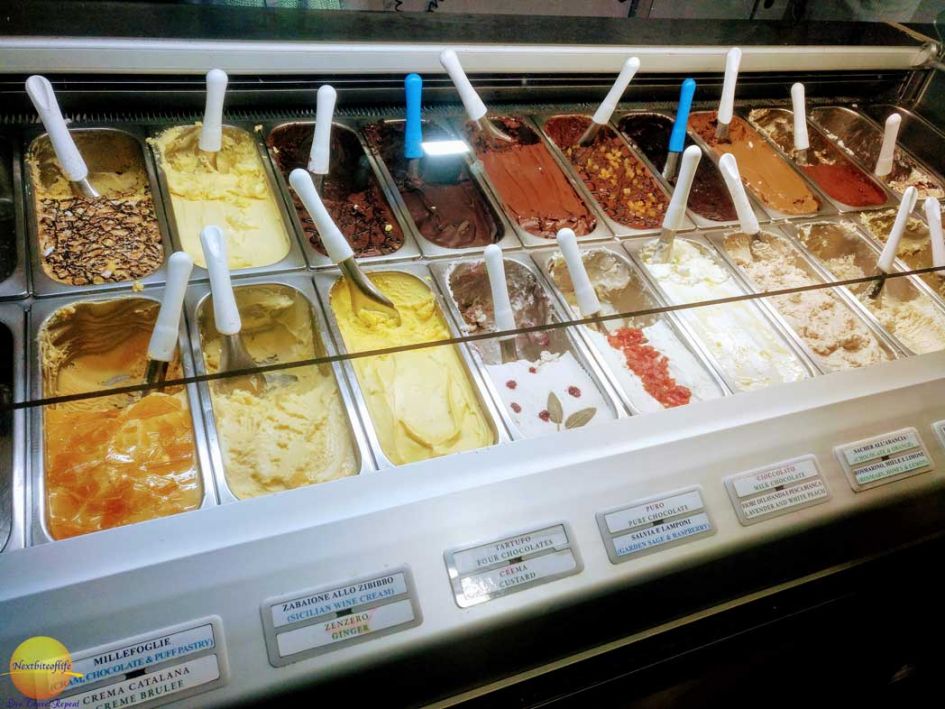 Yummy flavors on our Rome eating tour. They were all good and you could sample as much as you want.

A perfect ending to one of the best food tours in Rome, Italy concluded at last with a stop at a gelateria. This was my second favorite stop. I love gelato. Luca explained to us the difference between gelato and ice cream. Gelato is denser as it uses less cream and more milk and is churned slower. He also told us how to spot a true gelateria as opposed to the ones who skimp. We had our choice of two flavors. I chose pistacchio and coconut. Absolutely awesome. Tip: Get a cone. You get more as opposed to the cup :-).

Our Rome walking food tour of Trastevere ended with our dessert. The three hours flew by, thanks to the wonderful Luca and our very friendly companions. I wouldn’t hesitate to take it again and definitely recommend The Roman Guy. They  take you to sample some of the best Italian food in Rome, and at places you would never find by yourself as a tourist in Rome. Take it from a Roman, the food is awesome.

They have a rotation of several places so the tour differs. My advise to you is to come with an empty stomach and have on extremely comfortable shoes to fully enjoy the experience since there is a lot of walking. You will not be disappointed with what l believe is the best food tour in Rome. 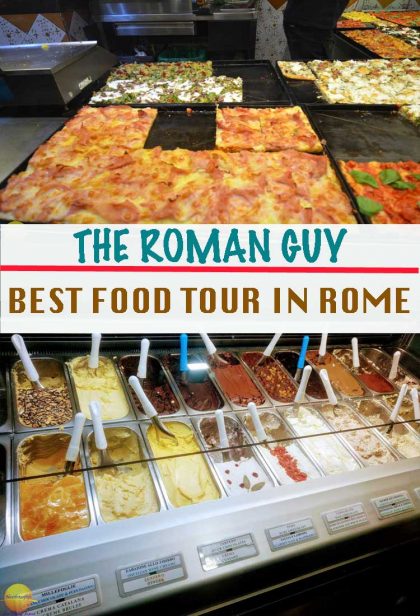 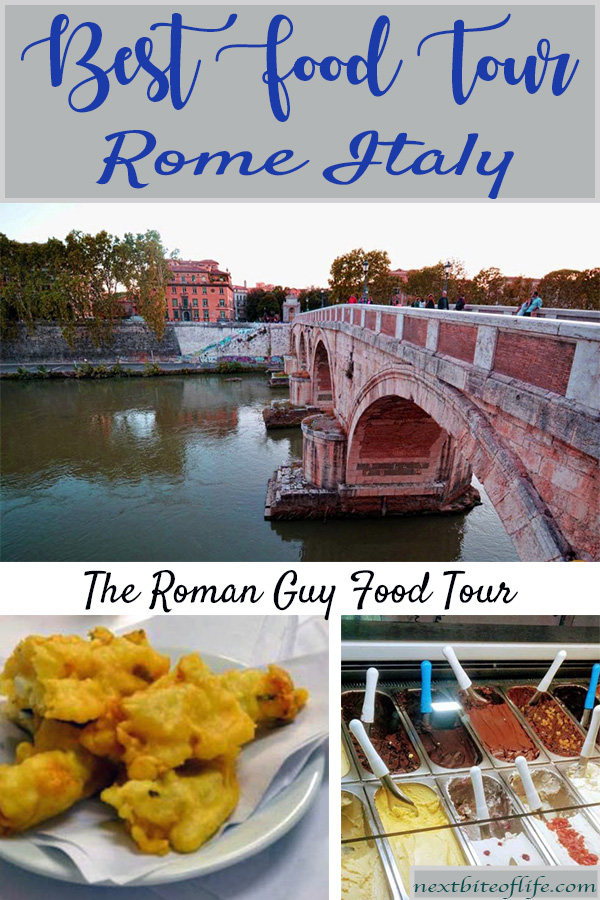 Have you been to Rome? If yes, did you take a food tour? What was your favourite food in Rome? If not, would you like to visit and take a walking foodie tour of Rome?