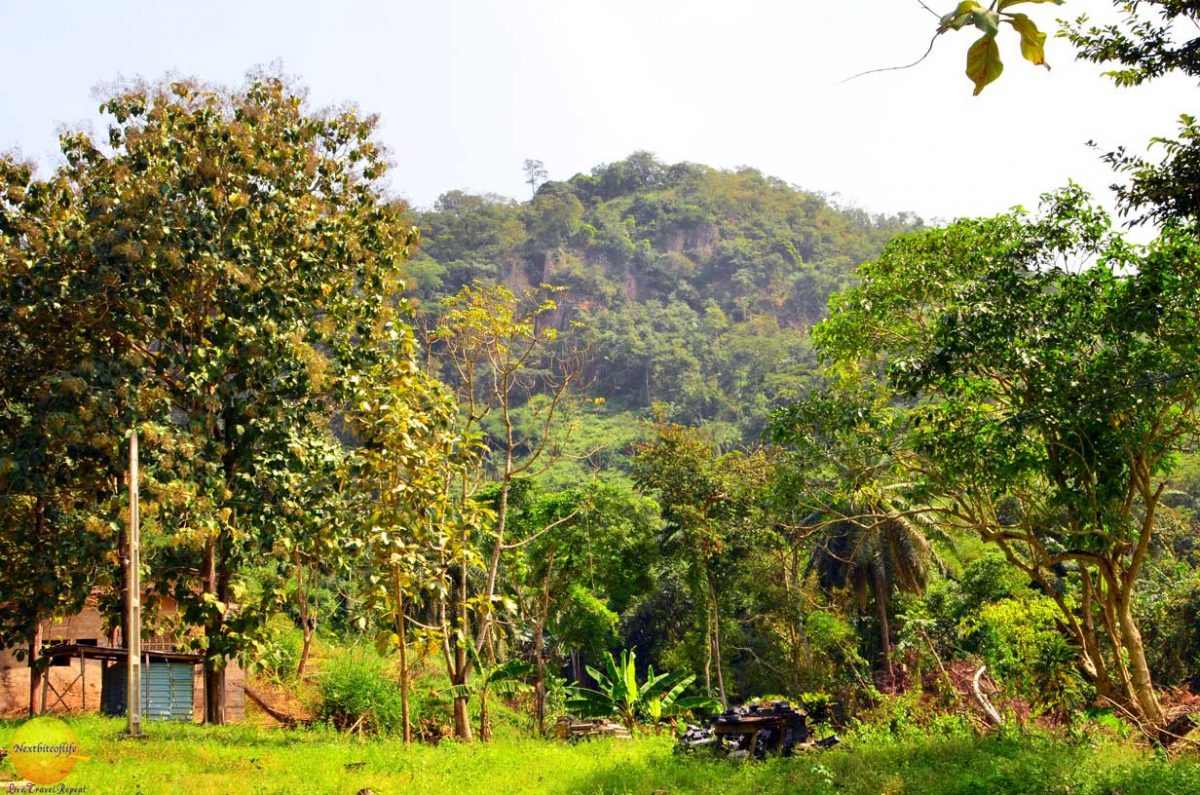 Prior to our visit to the Erin Ijesha waterfalls, l had no idea that Nigeria had any such natural beauty. All my past visits have been spent mainly in big cities of Lagos and Ibadan. Anyone who is familiar with either city knows how bad the traffic is.

Therefore, you put off anything that will put you smack dab in the middle of traffic unless truly necessary. I was delighted to visit to this waterfall. It was about a two-hour ride from Ibadan on really, really rough roads. Absolutely worth it though as you can guess from the images. 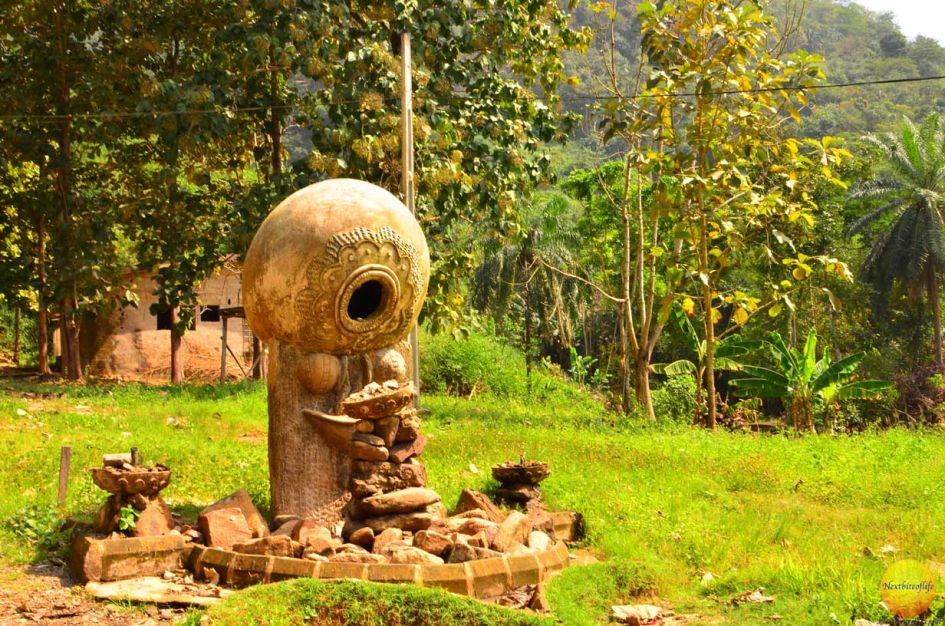 This dry fountain welcomes you to the Erin Ijesha waterfalls. Ironic isn’t it?

Erin Ijesha Waterfalls is located in Ijesha, Osun State. Despite the fact that the people are Yoruba like me, it is practically impossible for me to understand them when they speak. Even though Nigeria has three main languages apart from the official one (English) which are Hausa, Yoruba and Igbo, there are over 300 dialects.

I remember when my mum got really mad, and would by instinct revert to the dialect of her village making her words completely meaningless to us city kids. End result more smacks of course :-). The locals believe that there is a giant vat at the top that sends the water down and they also believe that the water has healing powers. 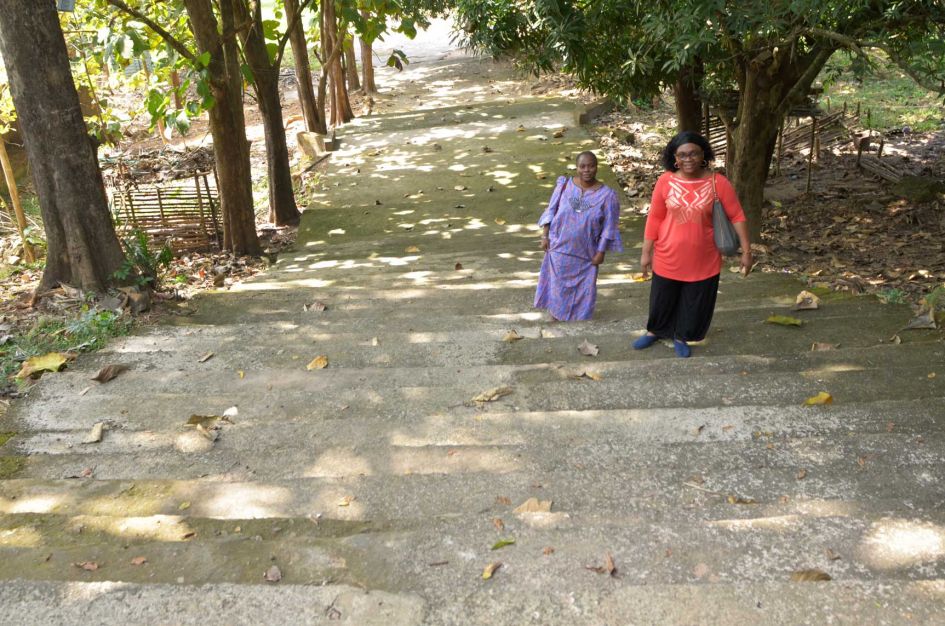 Getting to the waterfall was a journey by itself. It is located far off the main roads through almost non-existent paths. The locals are curious and helpful and will point you the right way because it is a famous landmark, a real source of pride. I didn’t take any pictures of the area as they would have all been fuzzy, but they were mostly thatch huts. The population looked to be much older people and very young children.

The adults would have left for the big cities to make money to send back home. I find that similar to Spain. Living here in a Seville suburb, we are surrounded by gigantic houses occupied by 2 people at the most. The parents build with a vision of kids and grand kids hanging around forever. The kids however, leave as soon as possible. Our next door neighbors are in their 70’s and have 9 kids, all gone. We only ever see 2 of the girls visit every so often. 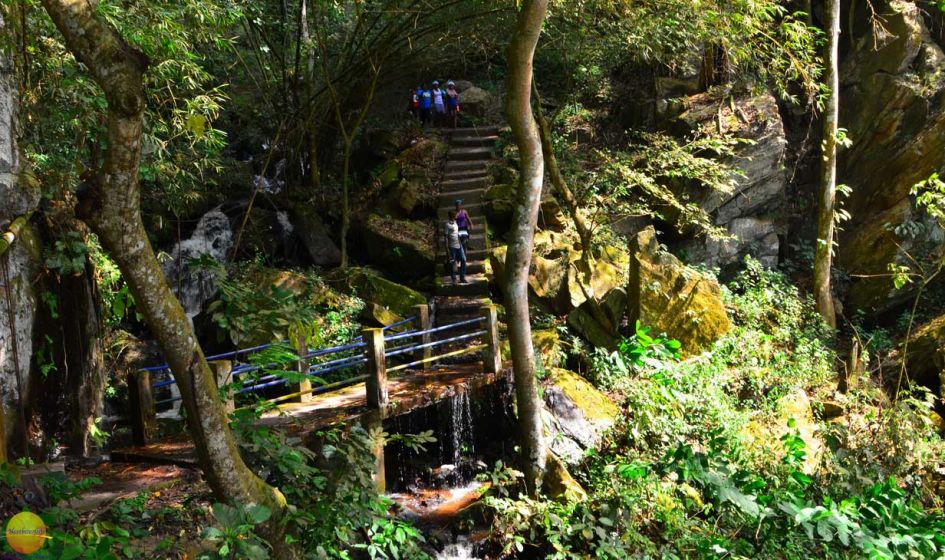 Things to do in Nigeria in Ijesha – Visit the Ijesha waterfalls – I tried not to look down when coming down the stairs. I need rails!

There are seven levels of cascade to reach the highest point of the falls. I knew we were going sightseeing, but had no idea it would involve any sort of climbing or hiking. Needless to say, l was in a dress. I was game and made it to the second level which is where most people stop l found out later, but Federico went with the guides. He’s not sure how many levels of cascade they did, but it was not all the way to the top as the stairs just stop and you only have the stones and shrubs to hold on to. For sure if you fall, you are doomed. No nearby health facilities. 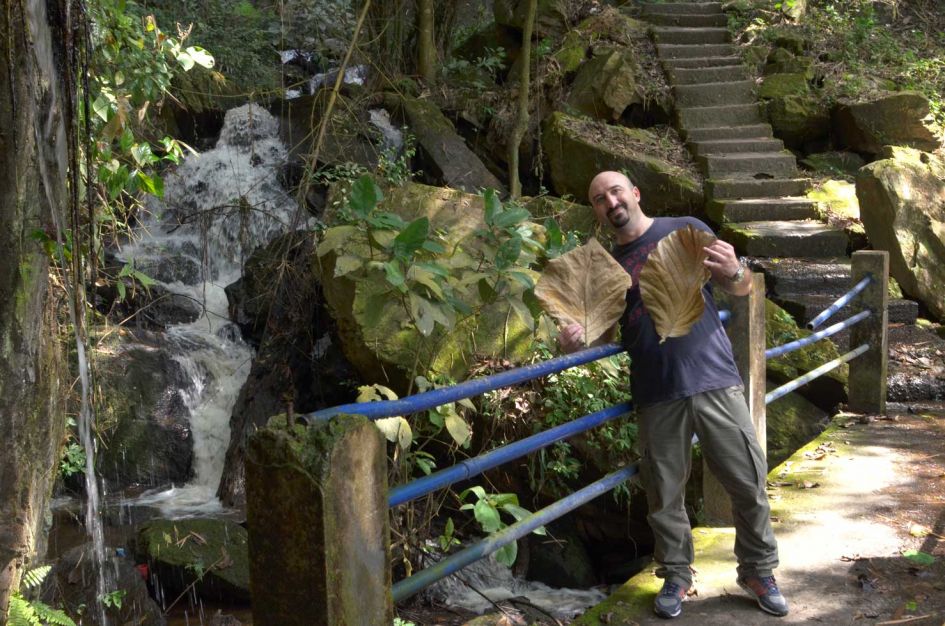 Federico was fascinated by the huge banana leaves at the Erin Ijesha. 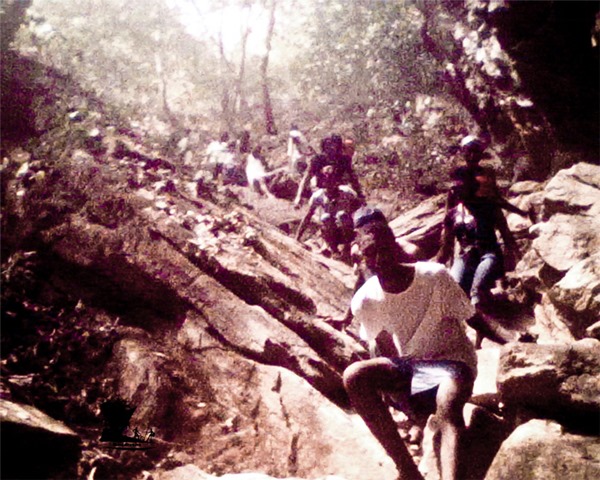 While Federico did the hike, I went back down to join my sister who had stopped at the first level. We sat there and chatted with school kids who had come on an outing to the falls. Unfortunately for them, they had just raised admission prices from $1 to $3 and it seemed like only a few of the kids had enough money.

The teachers were furiously negotiating with the gate keepers. They were so rowdy that after about 20 minutes of the childish chatter and enthusiasm which was driving everyone crazy, they decided to let everyone go enjoy the water. The kids took off screaming (average age 13) and we enjoyed the quiet. 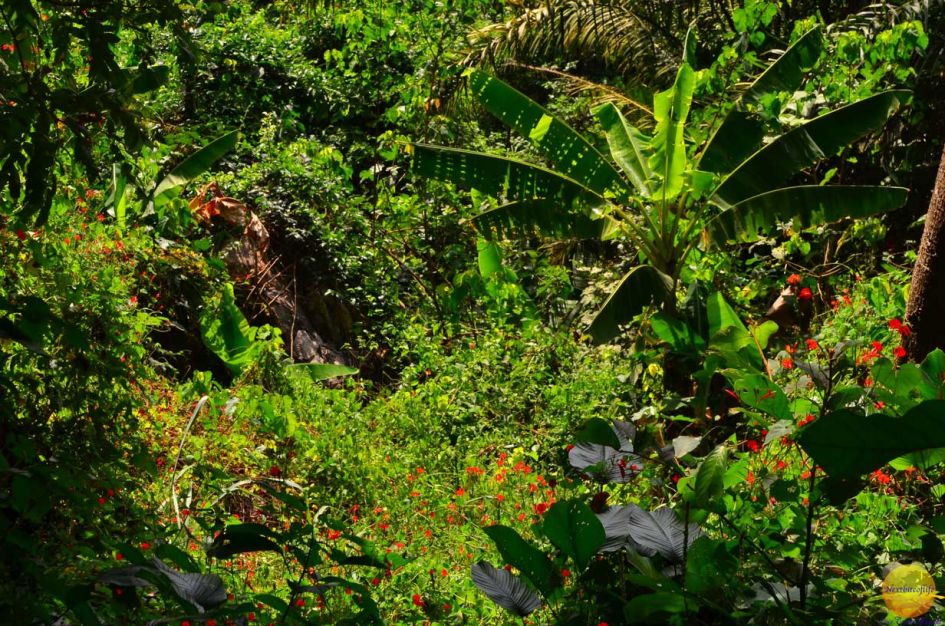 Lush foliage is of course expected, really pretty colours all around the beautiful waterfalls. 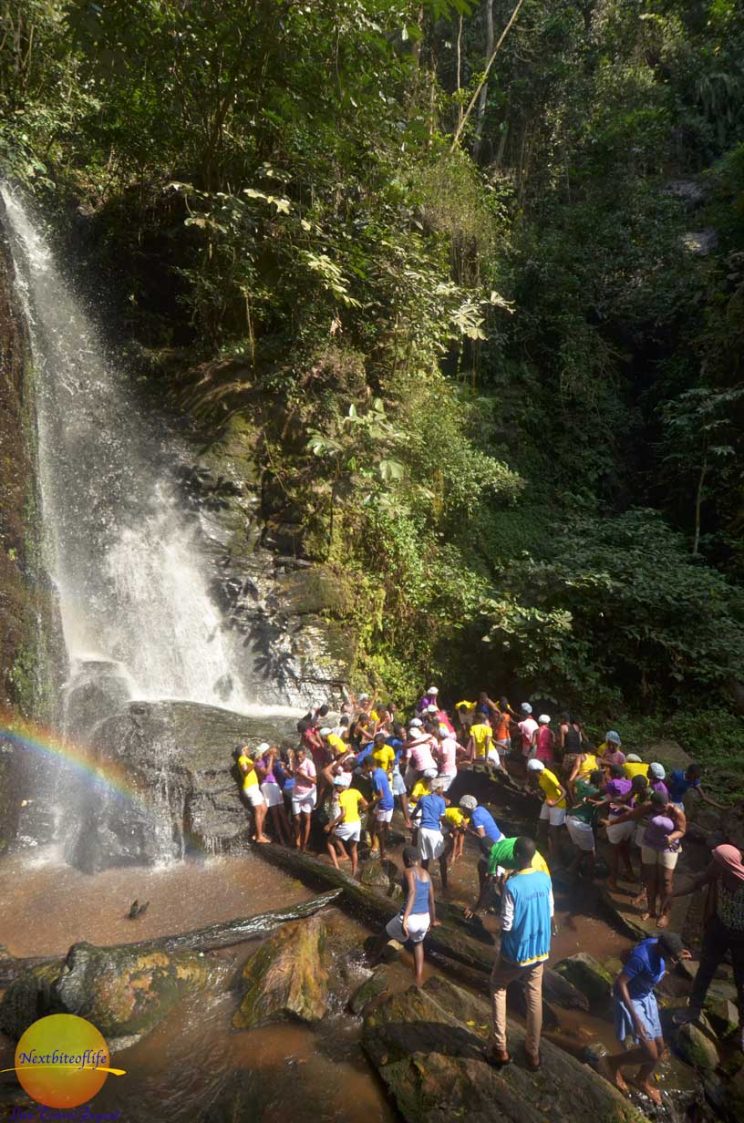 He saw some of the school kids up there, rainbow too!

Doing research, I see Nigeria actually has about eleven beautiful waterfalls including the Farin Ruwa Falls, the highest one in the country and compares to the more famous falls in the world. Higher than Victoria Falls which is 108 meters compared to the 150meters of Farin Ruwa.

Truthfully, even if l had been properly dressed, I would not have climbed past the second level. It was nice to see, and l would have enjoyed going under the water though. It would have been very refreshing. Close to the Erin Ijesha waterfall, there are really no hotels, so it’s best saved for a day trip. 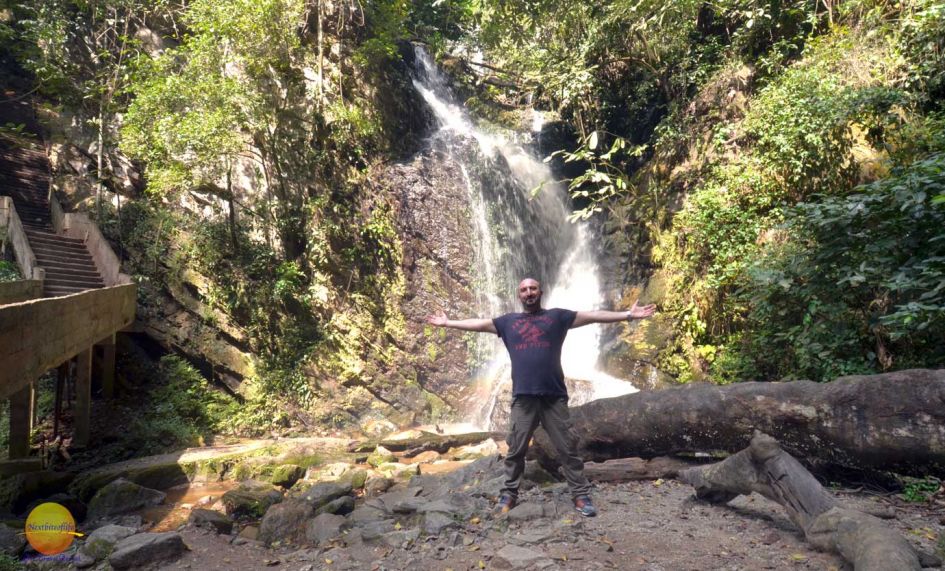 Happy he made it almost all the way. 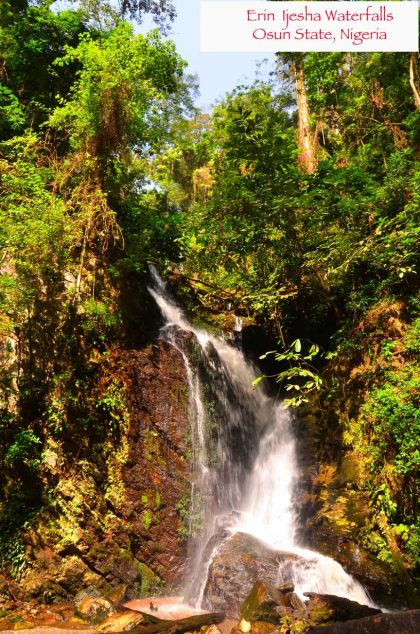 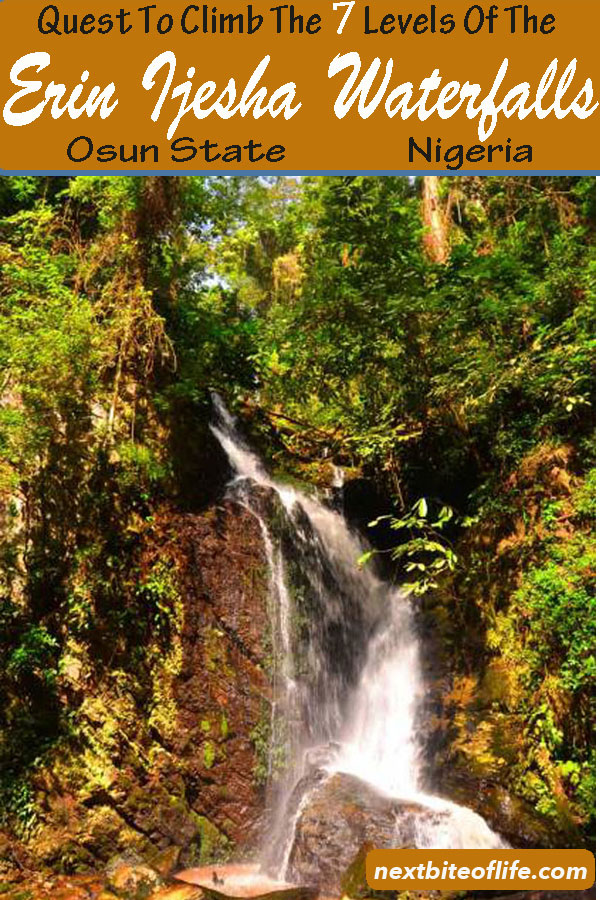 My aim with every visit to Nigeria from now on is to find something of interest or experience culture such as the Sacred Grove. You have already seen my favorite Nigerian food. There is a lot more to be discovered. I enjoy it when we go to other countries and l want others to enjoy Nigeria through my stories as well.

Would you be brave enough to attempt the upper levels or would you be like me and call it a day at level 2?