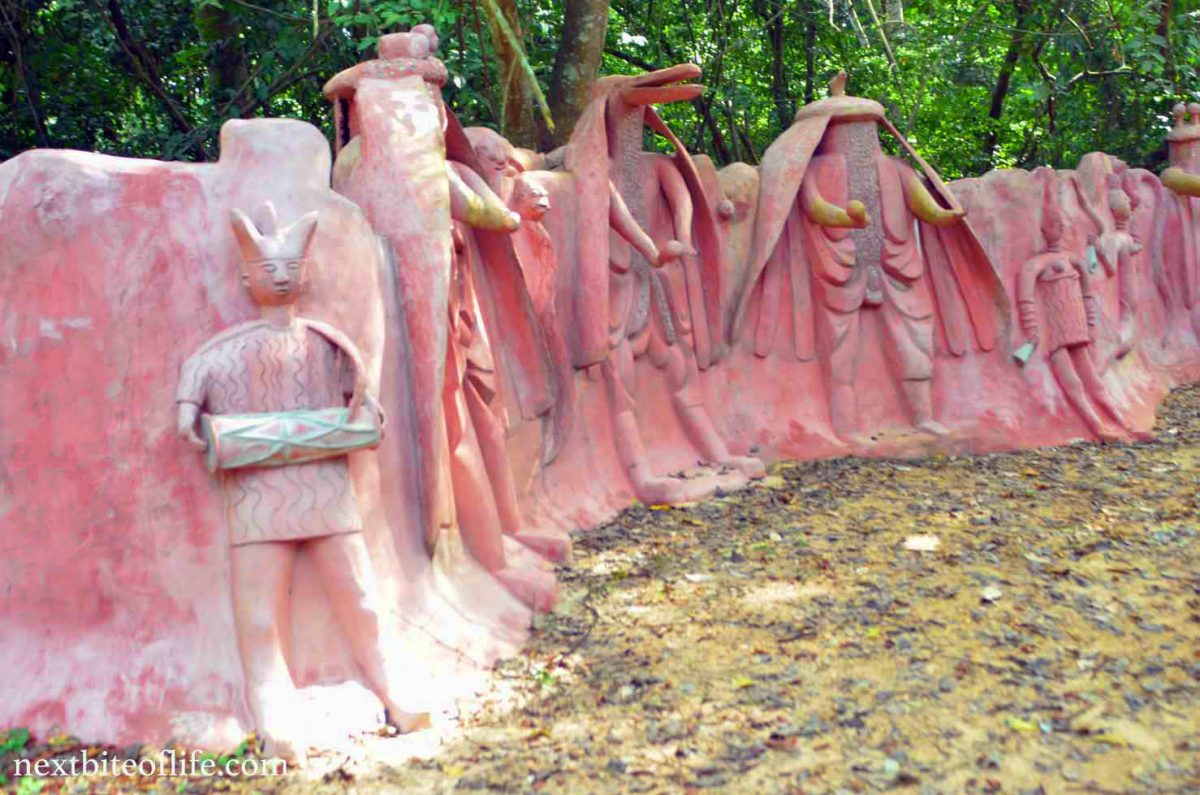 If anyone had told me that Nigeria has a UNESCO World Heritage Site, l would have scoffed. I had certainly never read nor heard about that. All we seem to hear about is Boko Haram and Internet Scammers. Our recent visit to Nigeria where we spent the most of December was an enlightening one.

Not only did we get to visit with family, but we also traveled short distances from our bases in Ibadan and Lagos to visit some of the cultural landmarks including the Osun Osogbo Sacred Grove. The grove is located in the South West of Nigeria and is one of the last remaining ones in the country. Most groves have been abandoned thanks to population growth and in my opinion, more westernized religion and the dying off of old people. 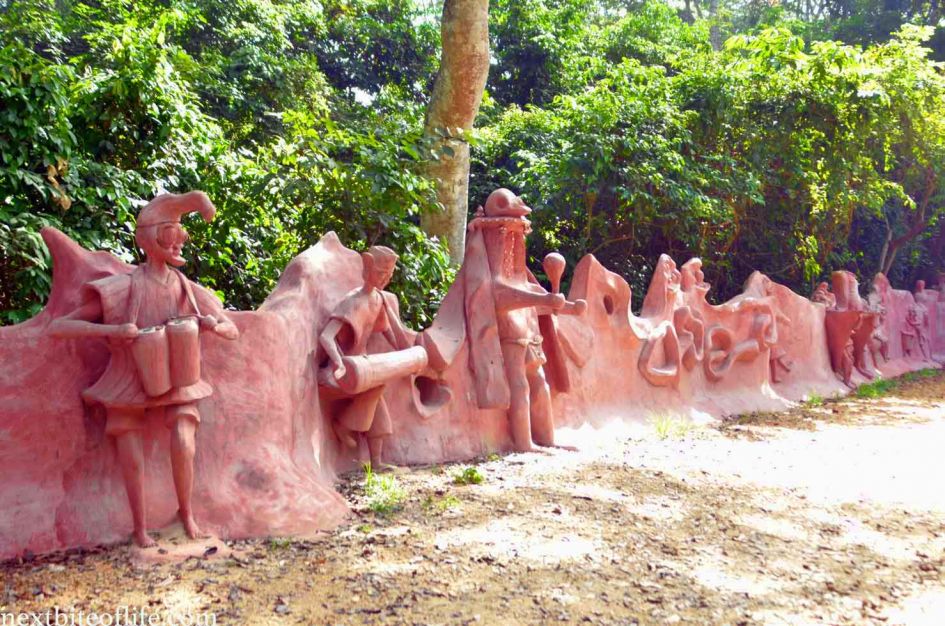 A view of part of the long wall at the Osun-Osogbo sacred grove.

To get a good understanding of the history of Osun Osogbo sacred grove, you have to understand the culture of the Yoruba people (of which I am one). They are the dominating ethnic group in the South West and are believed to number about 50 million. They believe in one Supreme Being by the name of Olodumare.

There are almost 200 deities called Orisa. These deities are usually natural occurrences in the environment. For example, the deity of thunder is called Sango (that would be Thor to you :-) ). The deity or Orisa of fertility is called Osun. According to the Yoruba folklore, Osun had a fight with one of the wife of Sango and changed herself into the Osun River. The grove is considered sacred since the deity is still believed to live within the river.

The Osun-Osogbo sacred grove was discovered by an elephant hunter during an expedition. An agreement was made between the goddess and the people. Osun would protect the people if they built a shrine for her and protect the grove. Devotees brought offerings to the goddess and women came for blessings if they were barren. 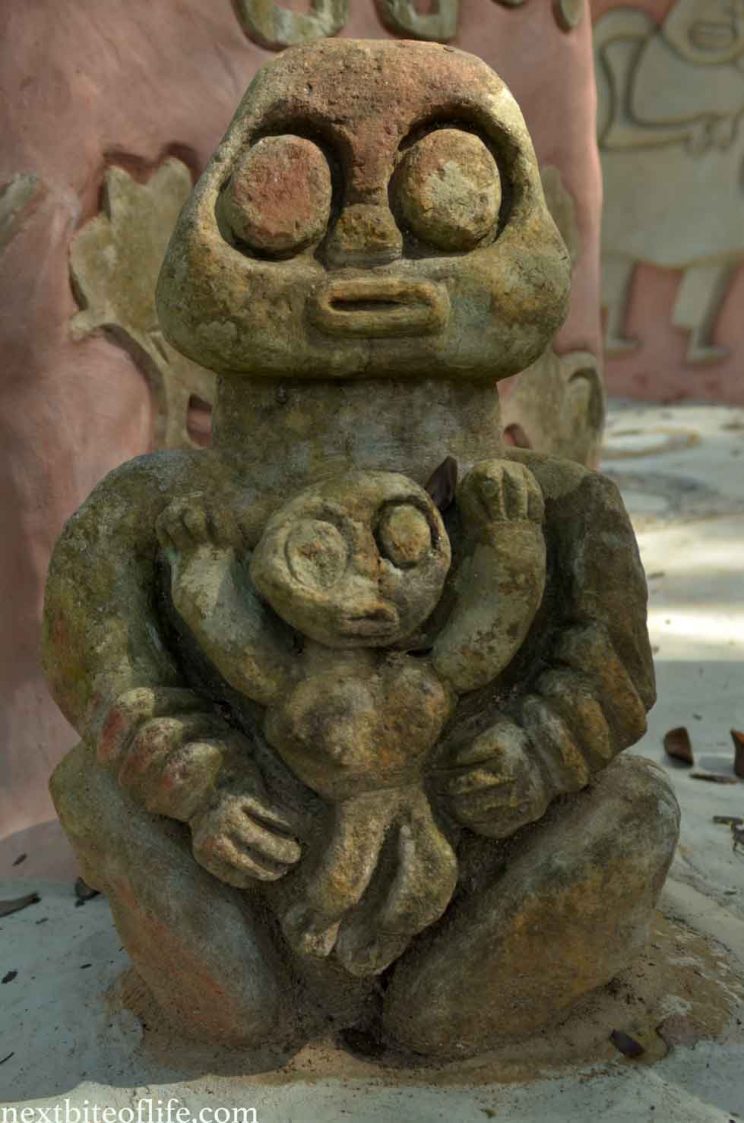 It was hard to keep track of all the deities at Osun-Osogbo, even with a guide. 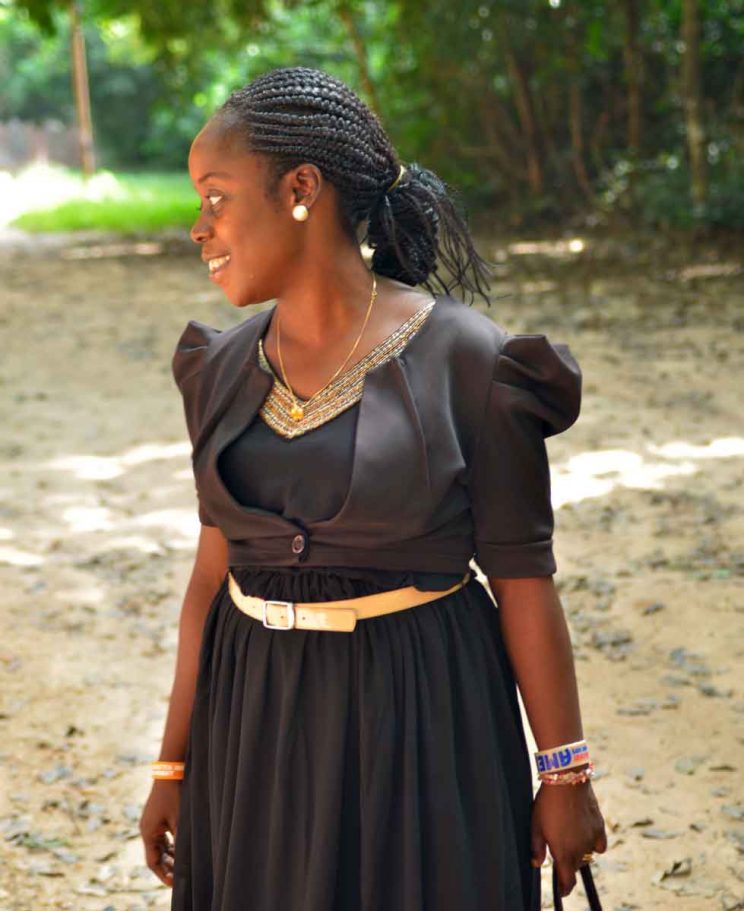 Our very knowledgeable Osun Osogbo Sacred Grove guide. We would have been lost otherwise.

This went on for years until Christianity and Muslim religions came into play. The Osun Osogbo Sacred Grove would have fallen by the wayside like most other groves during the colonial era had it not been for the efforts of an Austrian artist by the name of Susanne Wenger. She and several other local artists made and erected huge sculptures on the grounds of the grove saving it from demolition. These sculptures were made of mud, iron and cement on purpose to prevent looting and destruction by the religious nut jobs. . Ms Wenger was revered by the people who believed that Osun herself had sent her to save the grove. She married a local native drummer and spent the rest of her life in Osogbo.

Osun Osogbo Grove sculptures: Ms Wenger is supposedly the second carving and her husband is the drummer in the back. Still don’t see it. It looks like 4 men to me :-)

The Osun Osogbo grove covers 75 hectares and there are many plant species (over two hundred) to be found there. We saw plenty of birds and insects, not to mention absolutely adorable little monkeys. Thankfully, I did not know there were a lot of reptiles there until afterwards as we walked through some of the paths, otherwise l might have stayed behind. The grove became a UNESCO World Heritage Site in 2005.

Some of the sights we saw included:

The First Palace at Osun Osogbo: 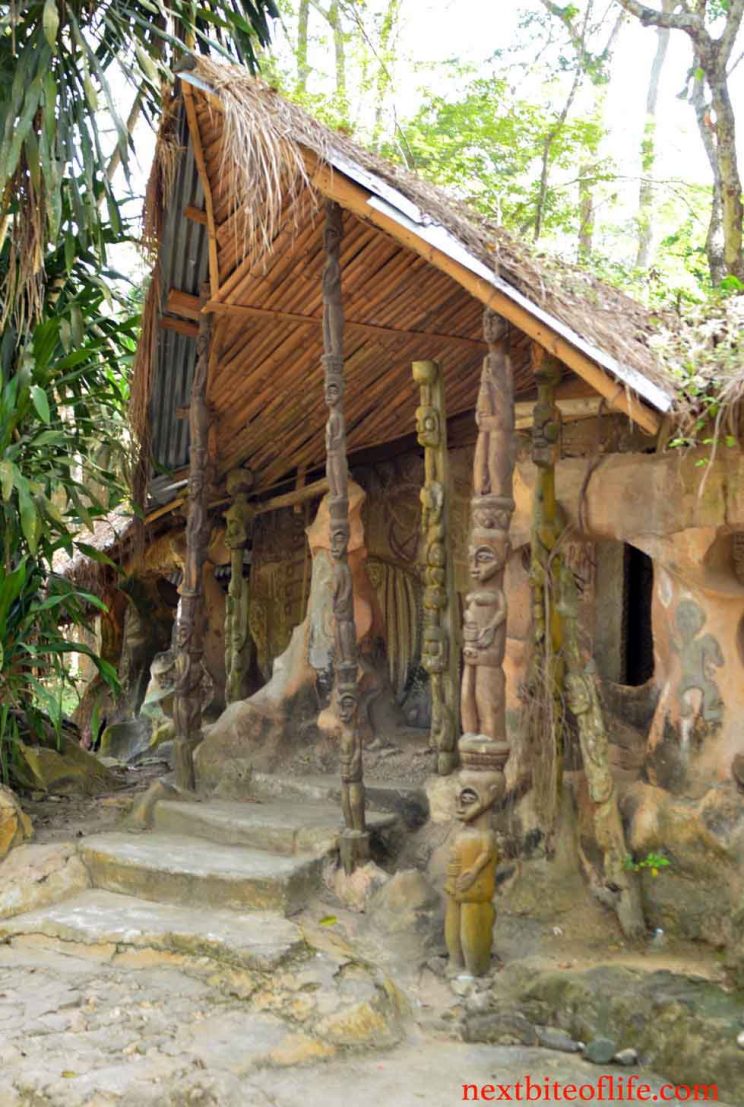 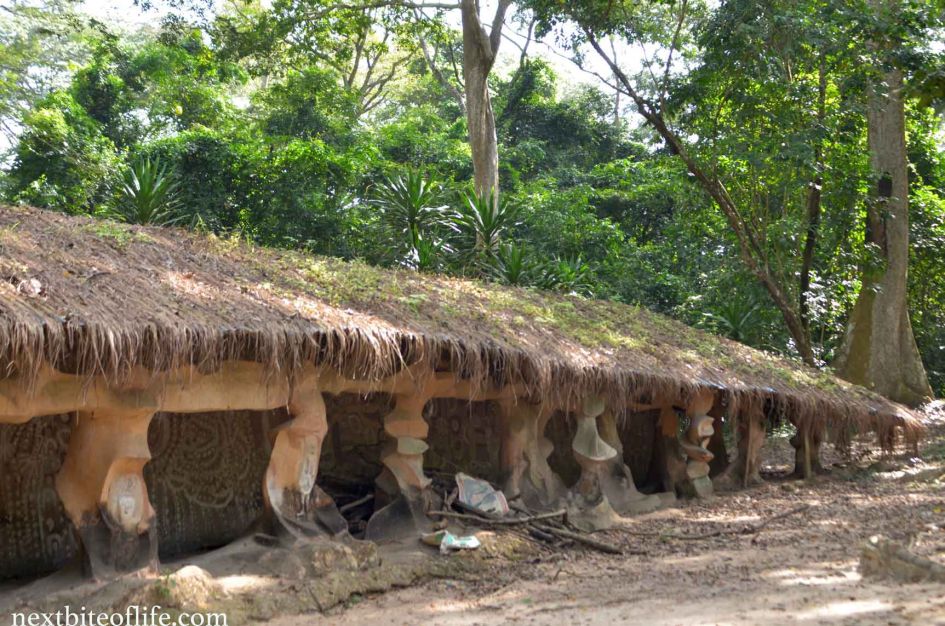 side view of the palace at Sacred Grove Osun Osogbo. You can see the various gods holding up the palace.

This is the first palace that the King of Osogbo lived in. We did not go inside the palace as there was a mean looking woman doing incantations out front and demand an absurd amount of money to enter (in addition to the entrance fee we had already paid). There is the original sacred stone stool that is over 500 years old. Though l don’t believe in deities, l also know l have seen some really, really weird stuff that still blows my mind till today and makes me wonder if there is something to it. Suffice to say, l wasn’t about to find out :-). 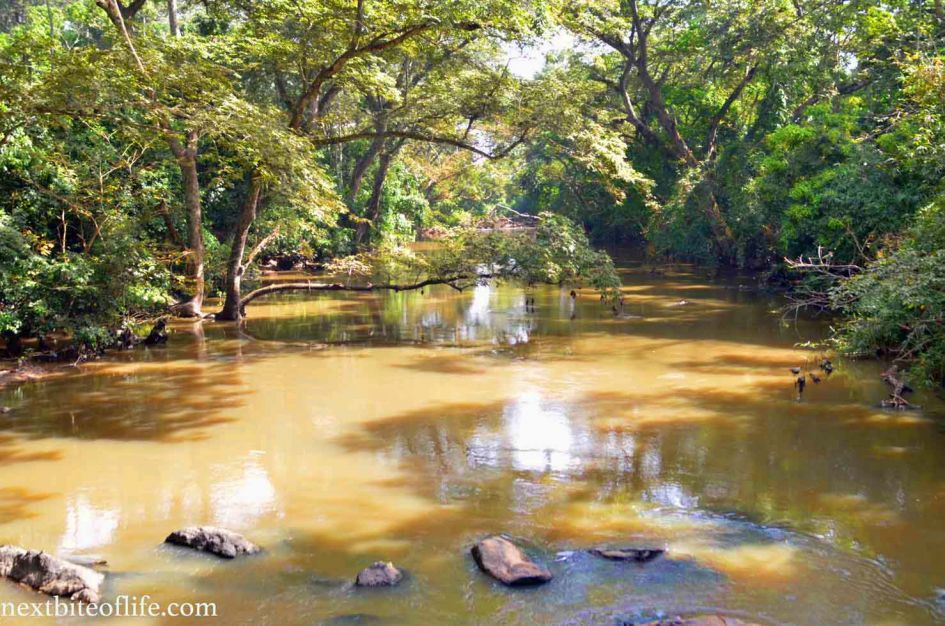 Where to visit in Nigeria? Osun Oshogbo Sacred grove is a UNESCO World Heritage Site. Cleansing rituals are often held here. The history of the Osun Osogbo river is just one of the many fascinating stories you hear during your tour.

Part of it is still used for ritual cleansing by worshipers. We saw one during our visit and were requested not to take photographs. The wider part of the river is quite nice. Very relaxing. The suspension bridge, which was built in 1935 during colonial times is kind of freaky..it vibrated as you moved on it which was a bit unnerving.  There are a total of ten Osun worship points along the river beds in the whole grove. 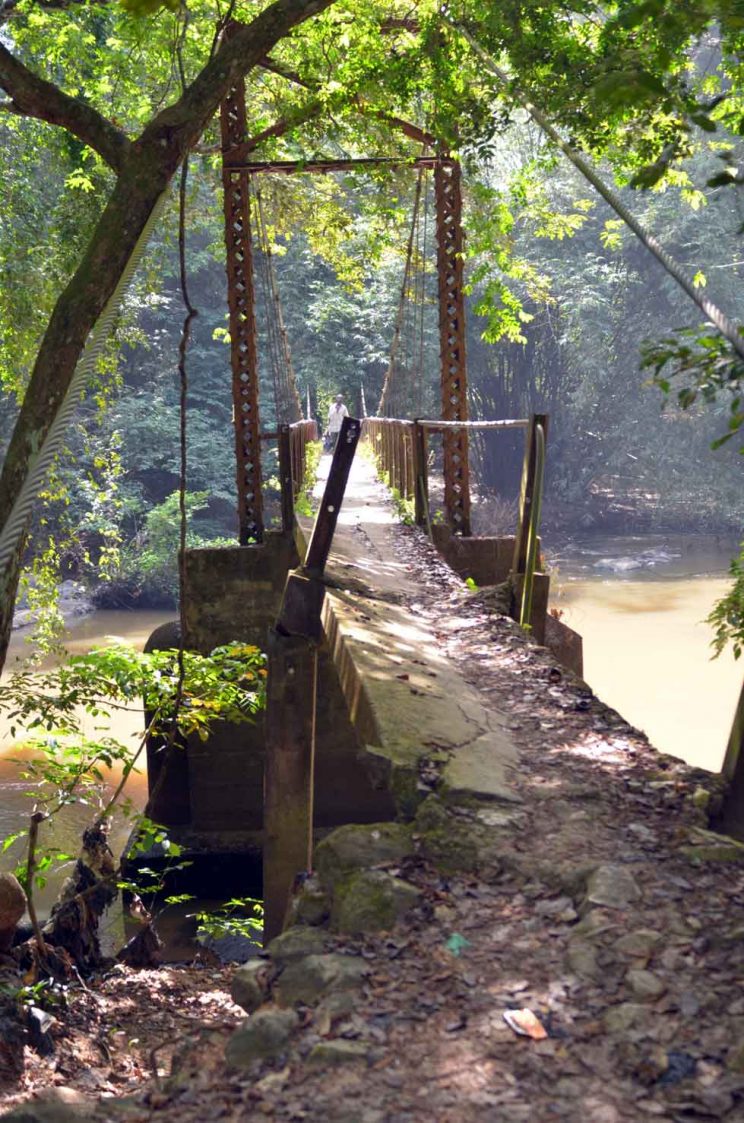 Sacred Grove pictures, including this rickety suspension bridge at best at the sacred grove but it was a nice view from the middle of it. 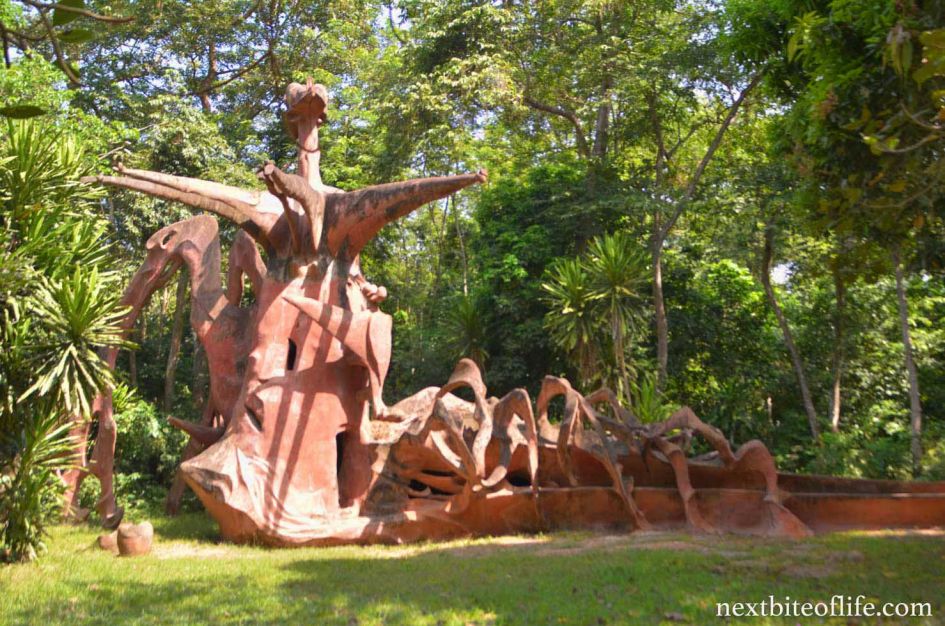 An Osun deity. The guardian of all at the sacred grove. It is a really big statue!

This is the goddess of women entrepreneurship and might. She is believed to have magical powers and is said to fly. She also has two messengers who deliver her messages to the other deities. She is the guard of the grove. You can see her three pairs of arms which are used to perform various feats depending on whats needed. They represent:

We also saw many sacred areas belonging to different deities. Memory fails me as to which one is what so l don’t want to give you the wrong information, so l will just show you the pictures of some that l do remember :-). 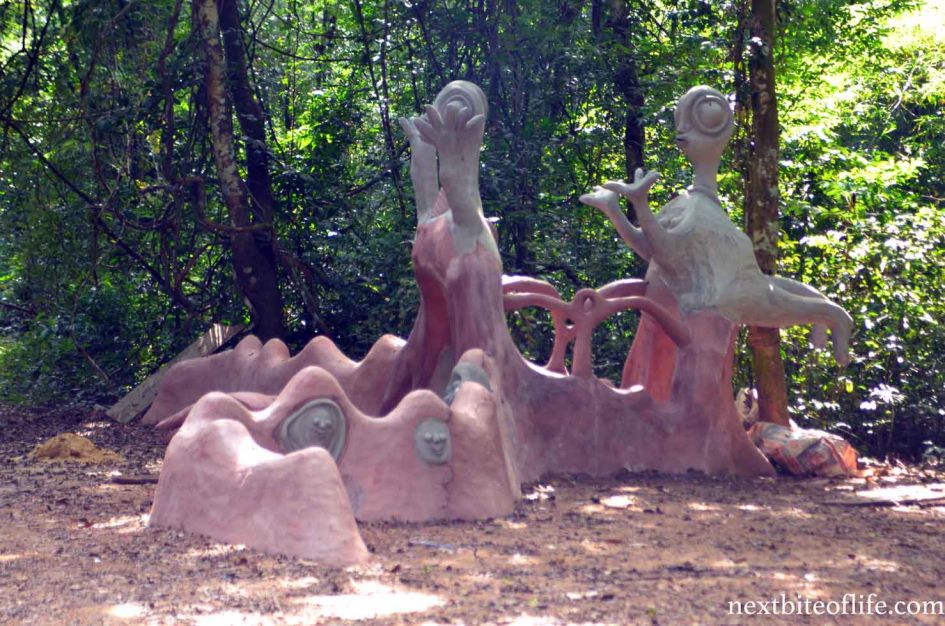 This one is for the native men who do spells and such and is forbidden to enter unless you are one. They walk in backwards and use a giant bird to communicate their wishes. 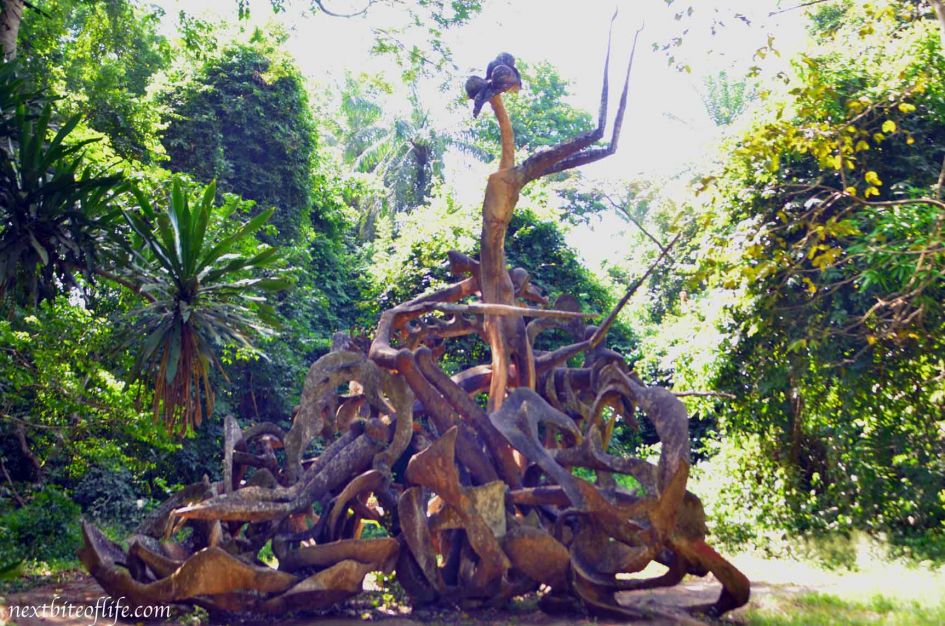 This one l think she said was the deity of retribution at the temple of Osun.  If you ask for her help and you don’t keep your word, she comes back for you in the form of chicken pox and other horrible diseases. You can see bodies that has been claimed. 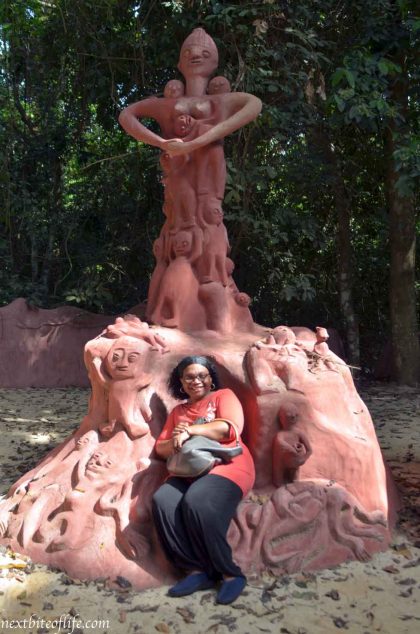 Goddess of Fertility. My sister decided to sit as she wants more grand kids :-) **Update. It worked, her oldest had twins!!! :-) 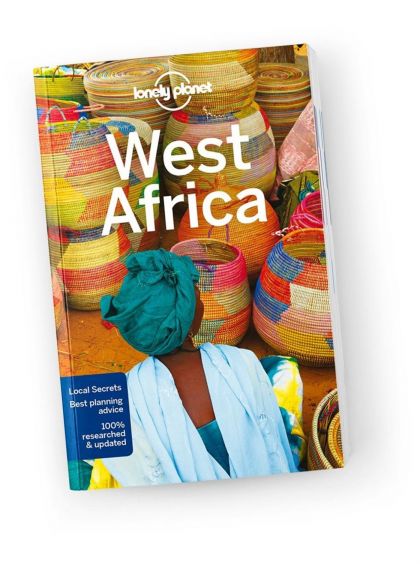 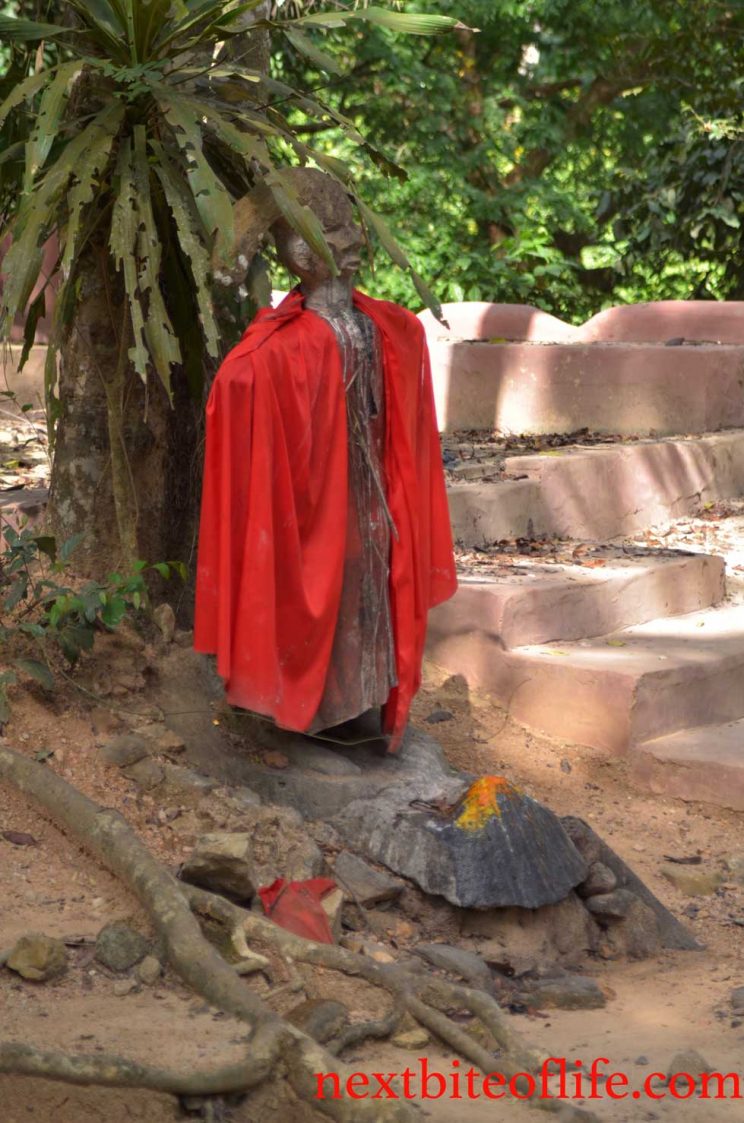 Altar of troubled kids. Parents come bearing offerings and ask for help here. I can think of a few nephews who need this :-) 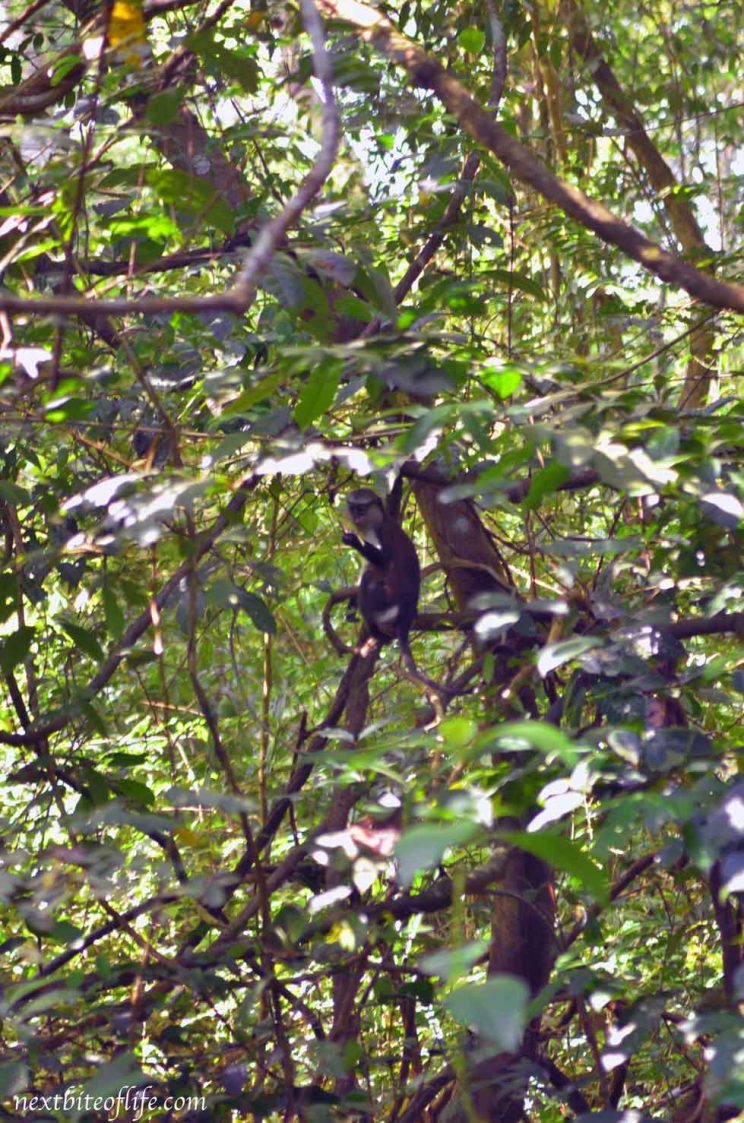 We saw a bunch of these playful little monkeys swinging at the sacred grove. They were brought here and are totally dependent on handouts.

Once a year, there is the Osun Osogbo Festival which I’m told is a very colourful must see. It goes on for 12 days! and people from all over the country and in fact world make the pilgrimage to attend. The deities are still worshiped by people all over, especially descendants of slaves who were taken to other countries.

On the 11th day of the festival, the chosen maiden (my Yoruba sucks and l couldn’t translate if she meant just a girl or a virgin) enters the inner part of the Osun temple where she stays till the end. On the 12th and final day, this maiden who represents the soul and life force of the deity returns the Osun shrine.

During this very long walk back, she has to hold two bitter kola nuts in her mouth (so she can’t speak of the rapture experienced), she can not stumble (otherwise all humankind will suffer for the following year). I definitely couldn’t do it. I hate kola nuts! :-). 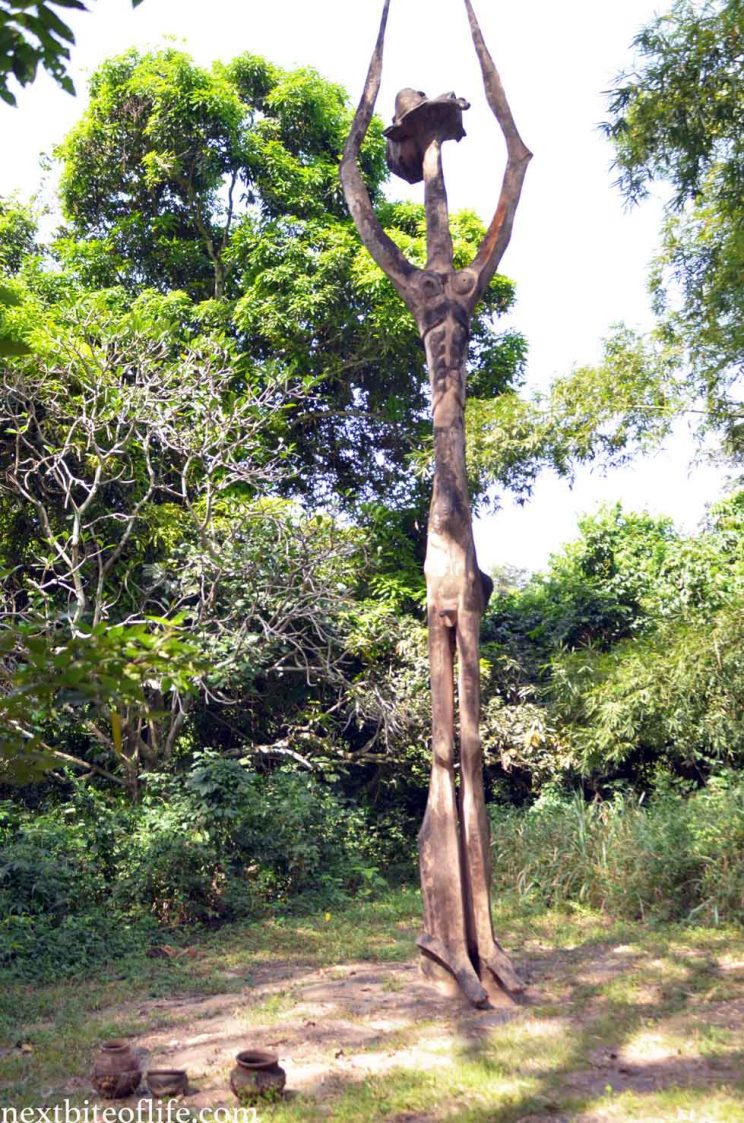 “God” the supreme being stature at the Sacred Grove of Osun Osogbo..

It was amazing and eye opening to experience this sacred grove and to learn the history of Osun Osogbo Sacred Grove. I find it interesting that these native practices still exist. I was fascinated with some of the medicinal plants that were there.

My grandfather was a herbalist. The one the villagers went to when ill.  He would mix tree barks and plants and make you drink the potion. Totally brings back horrible memories for me. Never once did that stuff taste like chocolate. Nope! It was more like raw sewage mixed with liquid poop, bath water and more raw sewage! :-( .  It usually took at least 3 adults to catch me and pour that stuff down my throat. You were given potions to stay healthy as well! Yuck!!!

My mum always said for a fat kid, I could run like the wind when it came to taking medication. No wonder I ended up being a pharmacist..right? !!! :-) ;-). I am proud that this place lives on as it is part of our history.

The entrance fee is roughly $3 converted. If you have a professional camera, you need to pay an extra $10. Please remember, if the tell you not to take photographs of certain rituals or places, respect that. A lot of people still believe that taking pictures of them takes away their souls. 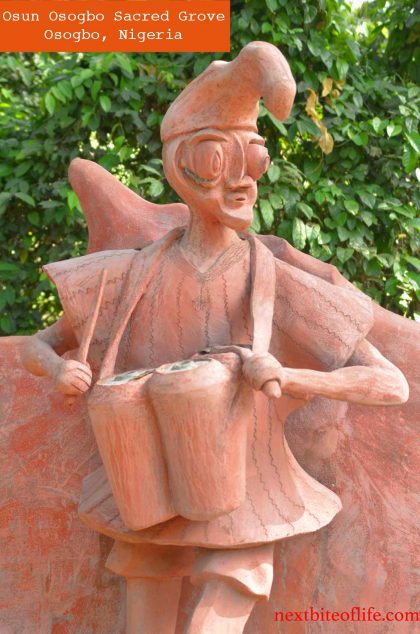 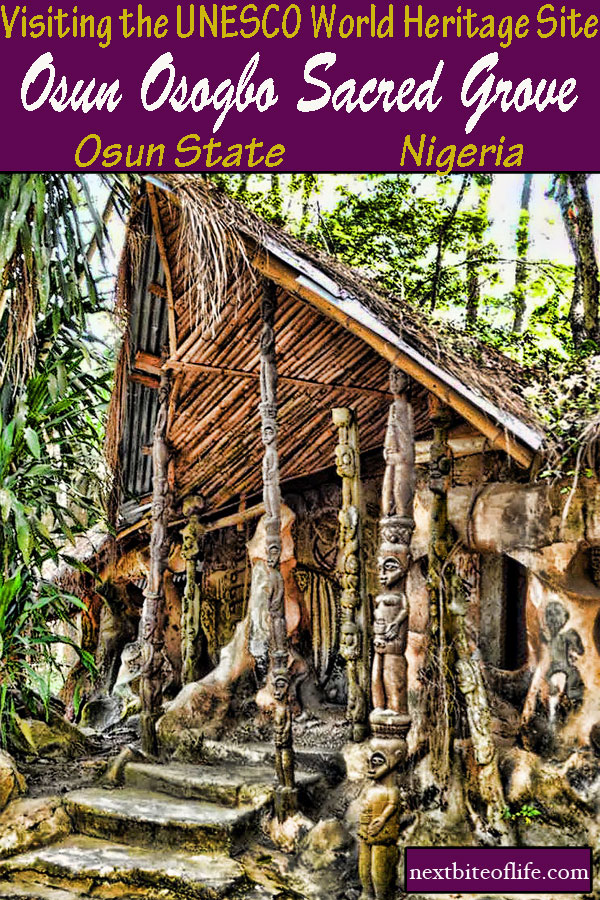 What do you think of this Nigeria UNESCO heritage site, the historic Osun Osogbo Sacred Grove? Do you believe in deities that are messengers of God or at least acknowledge that they exist?