Berlin Carnival of Culture & Best Parts Of Berlin To Visit 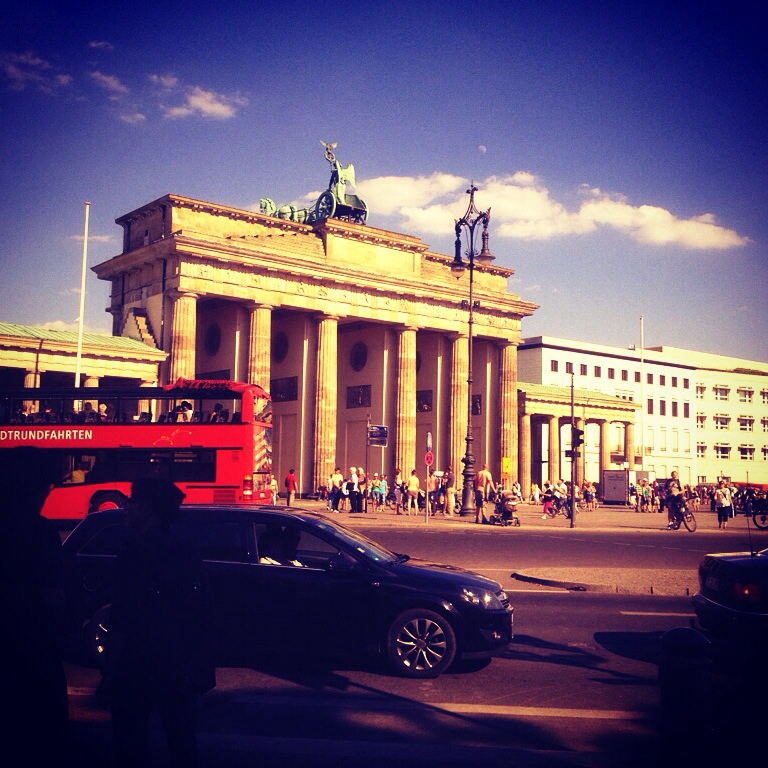 The Berlin Carnival of Culture was a hoot to see. We spent seven glorious days in this wonderful capital city brimming with history. Our visit gave us a good taste of the city, and better yet, it left us wanting to return. This is always the kind of visit we hope for whenever we go to a new place.

Due to some language problems with the  guide at the bus stop, we ended up in a much different part of town. A part of town where we could not find anyone who spoke English. I mean, nobody! l was already saying “I hate this city!”. We did have our first taste of the very delicious currywurst. We were at our wits end when, out of the blue, we heard some Italian being spoken by a group of 2 women and one man passing by.

My husband stopped them,  a flurry of Italian was spoken, and they were kind enough to point us upstairs to the train. Turns out, the train runs in a circle. Just as we were about to get on one, we heard the Italian guy yelling for us to stop. He had run upstairs after us and apologized for not telling us the right direction and said to wait for a train on the other side. Thank God he did, we were only 3 stops away from where we needed to be. Had we gotten on the first train, we would have had to sit through like 20 stops to round out the circle. Whew!!! How nice of him!

The rest of the week flew by. There was the yearly Berlin Carnival of Culture festival that weekend in Kreuzberg, which was the area we stayed at. I had planned the visit so we would be able to catch it, as l’d heard it was a nice colorful affair. We were not disappointed. They really know how to party. We met up with Victoria, theBritishBerliner blogger,  her son, along with another friend of hers and watched the parade together.

What a load of fun! How nice to connect in real life with people you meet through the online blogging world! We made it through 34  of the 84 floats, before  heading for the food area. There were about 700,000 spectators they said. Looked like more to me! If you ever visit Berlin around Carnival time, you should definitely make some time to enjoy the festivities that run all day! Quite a lot of countries were represented. I especially enjoyed China, Brazil and Jamaica dancers and music. The following are images of some of the floats and marchers from this year’s Berlin carnival of culture.

Find the best Hotels in Berlin for your stay. 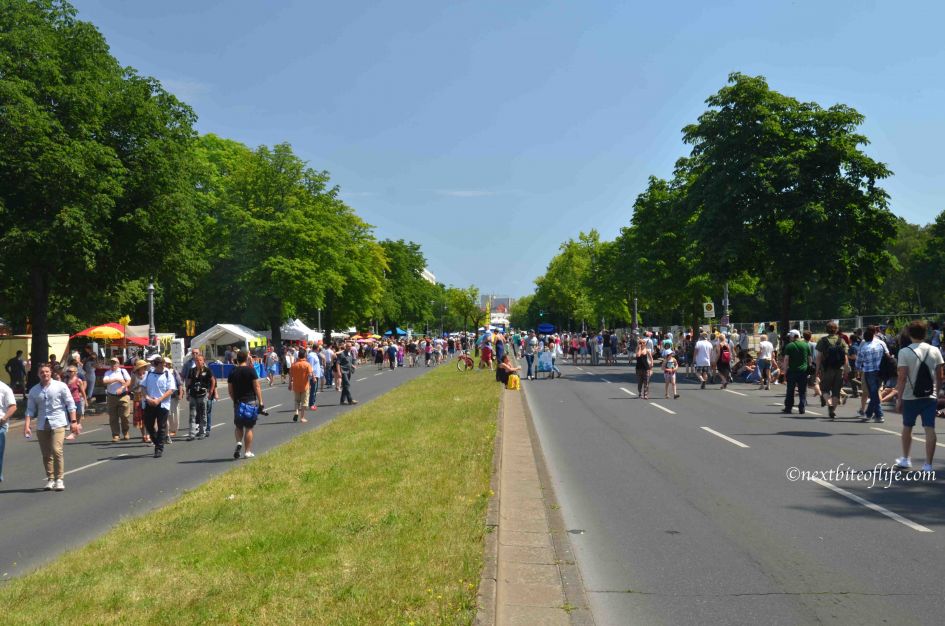 Carnival of Culture early spectators arriving to claim their space. 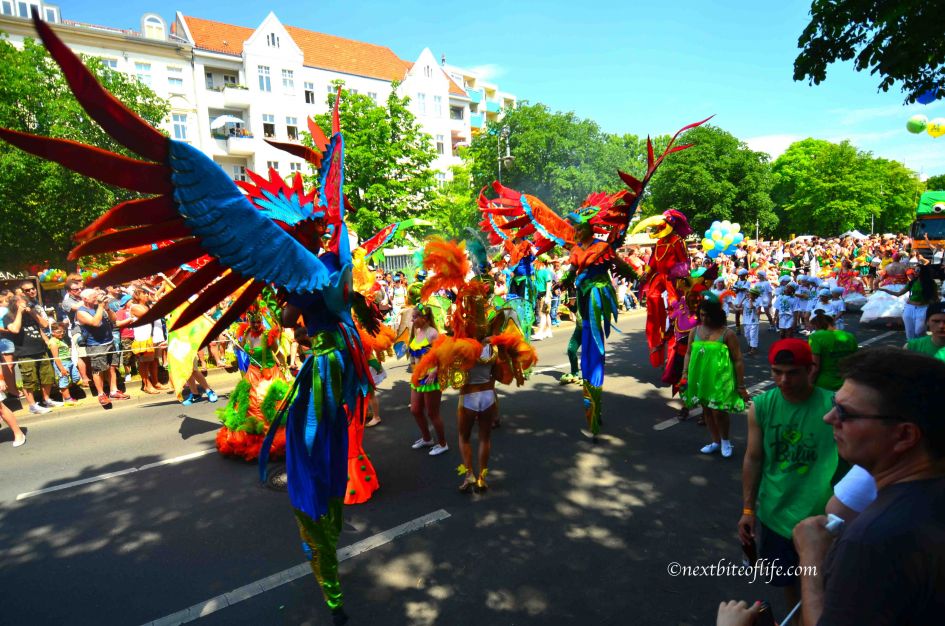 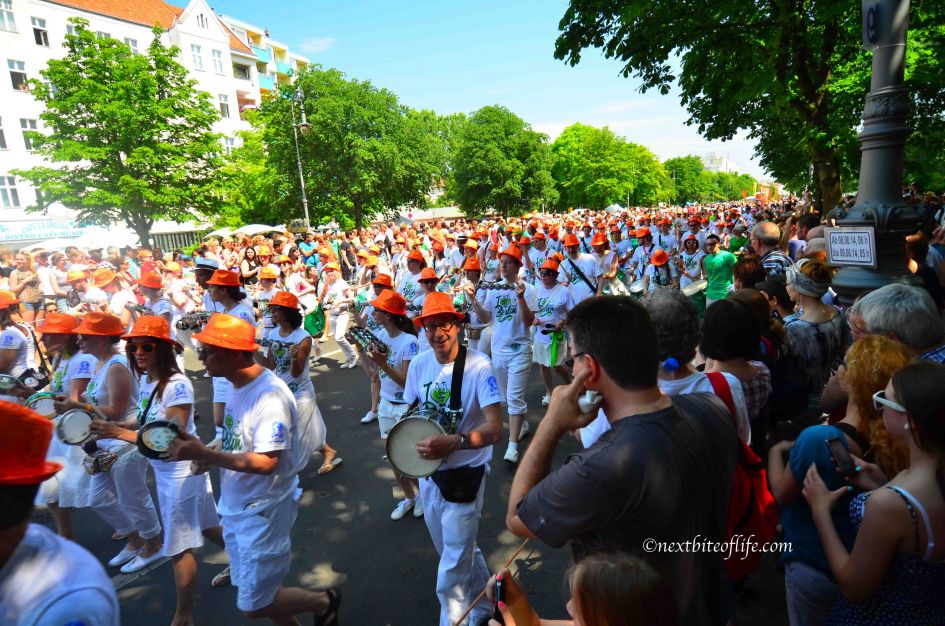 It was packed to the gills as they say!

I think this yearly festival might have started showcasing people rom different cultures, but over the years, it has evolved to include pretty much every fringe group. We saw religious marchers, Gay and Lesbian groups, even some who looked like devil worshippers. Something for everyone.

More images from the Berlin festival of culture: 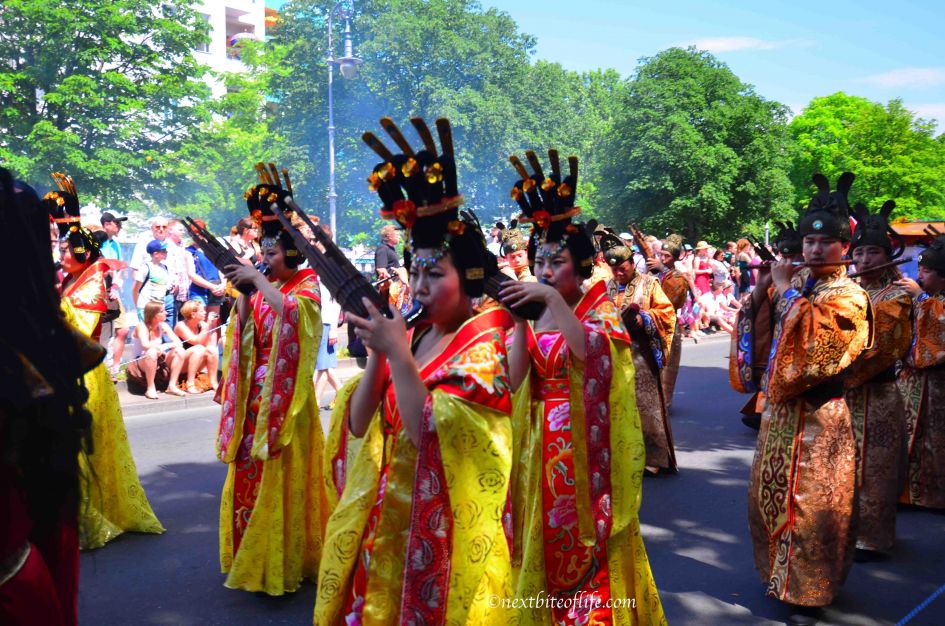 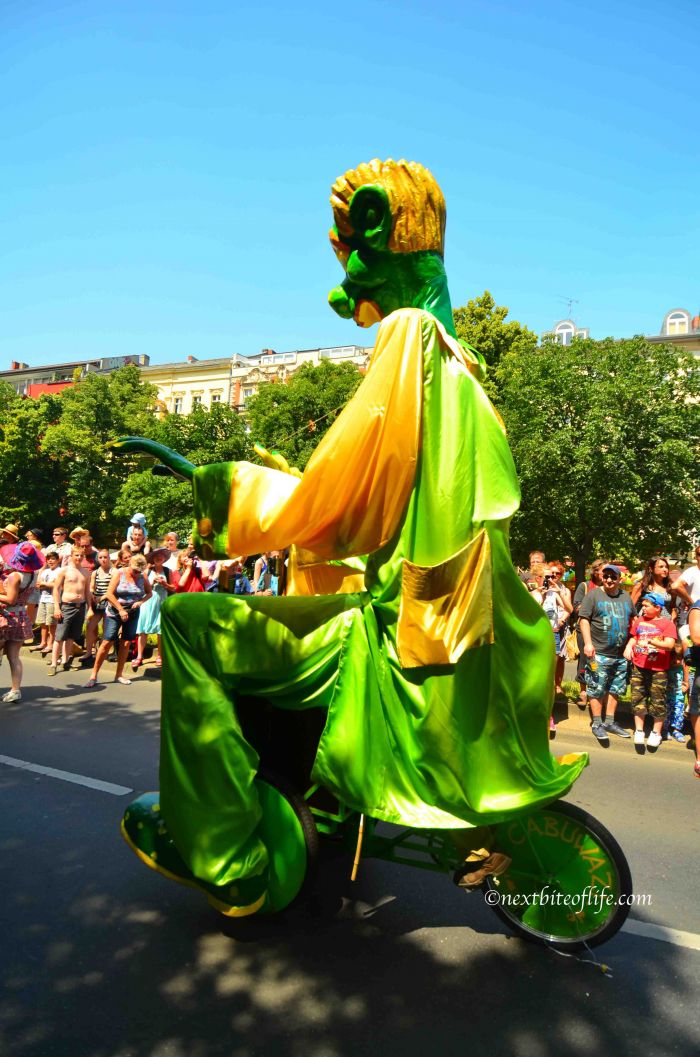 Would he be the jolly green giant German style? This Berlin cultural festival seems to be a very popular event. 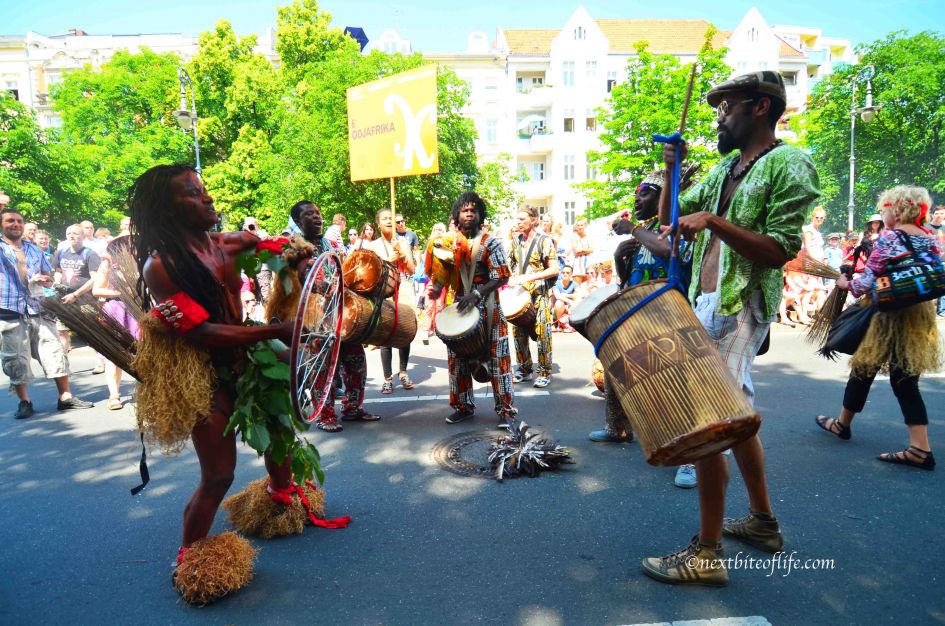 There were also some very scary monsters! More suited for Halloween in my opinion :-) 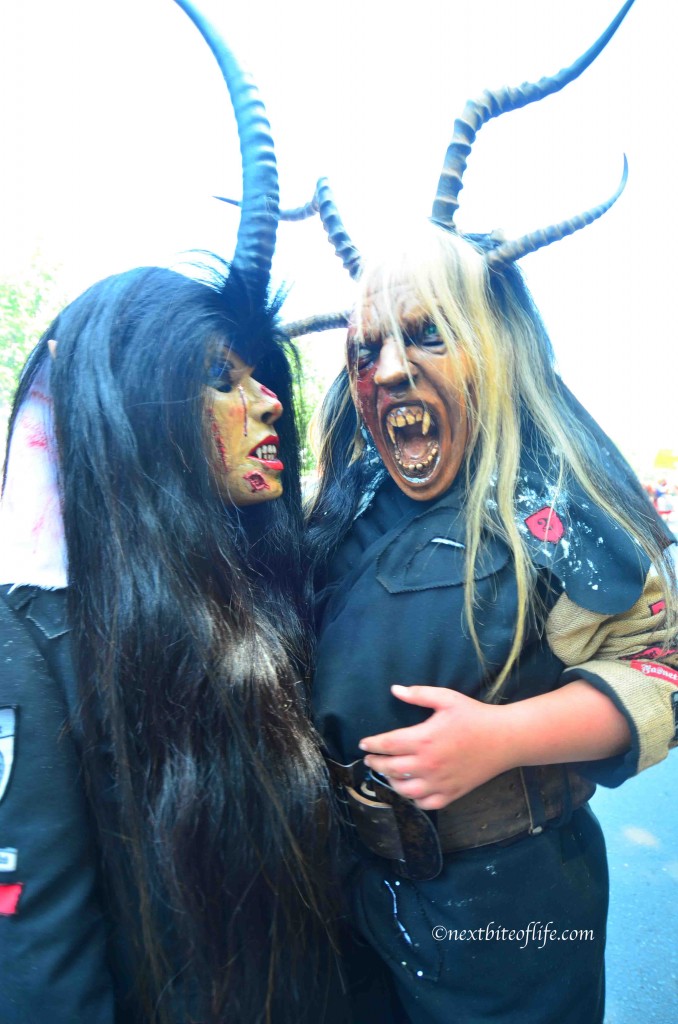 These were seriously scary.n.the stuff nightmares are made of. 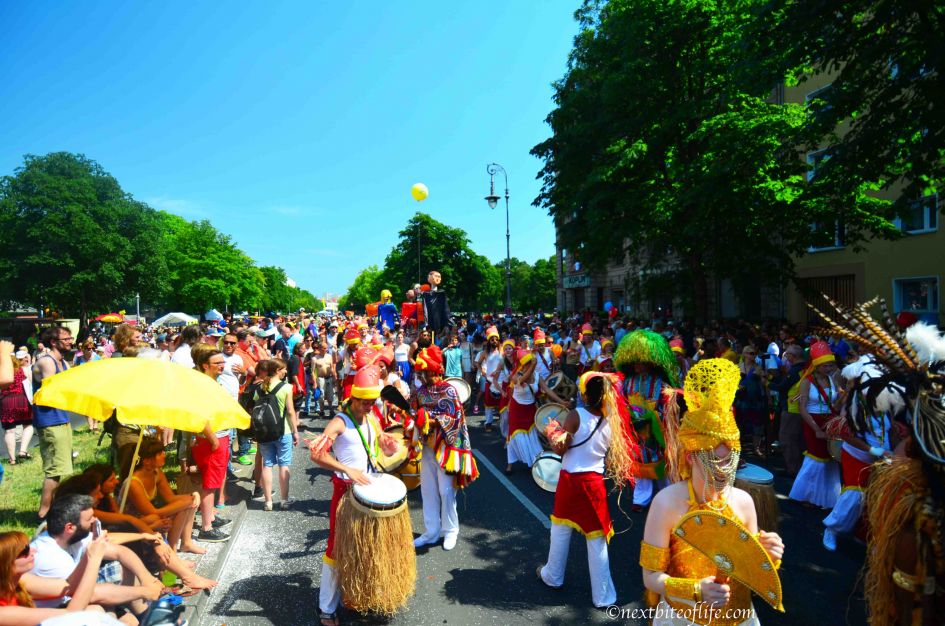 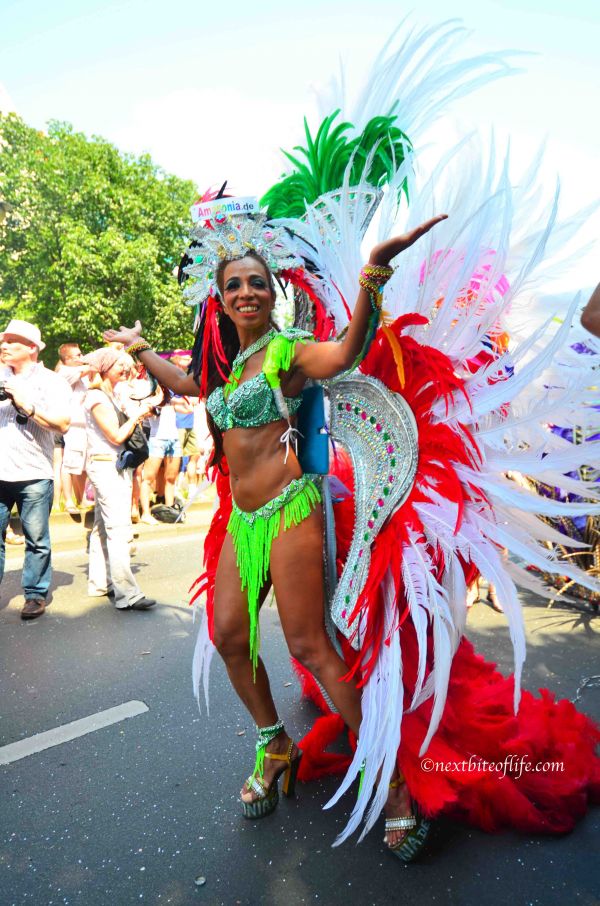 Berlin carnival of culture participant: She was part of the Brazilian marchers and was extremely proud of her heritage. 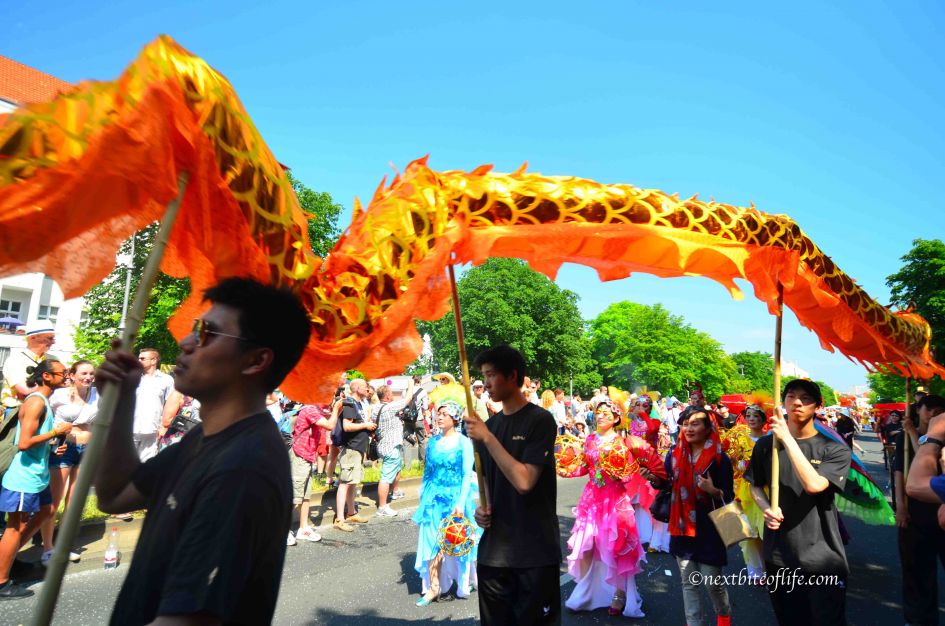 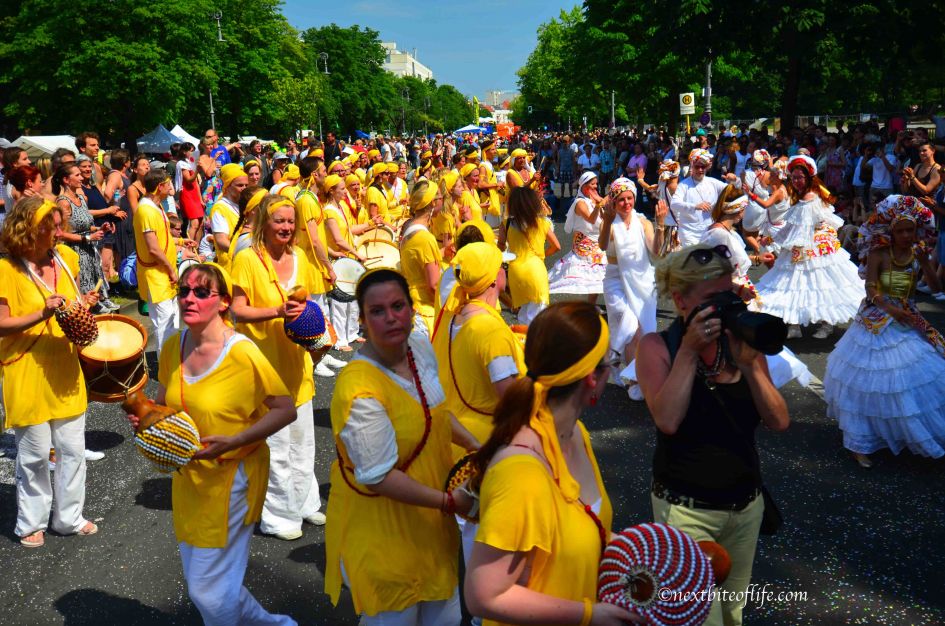 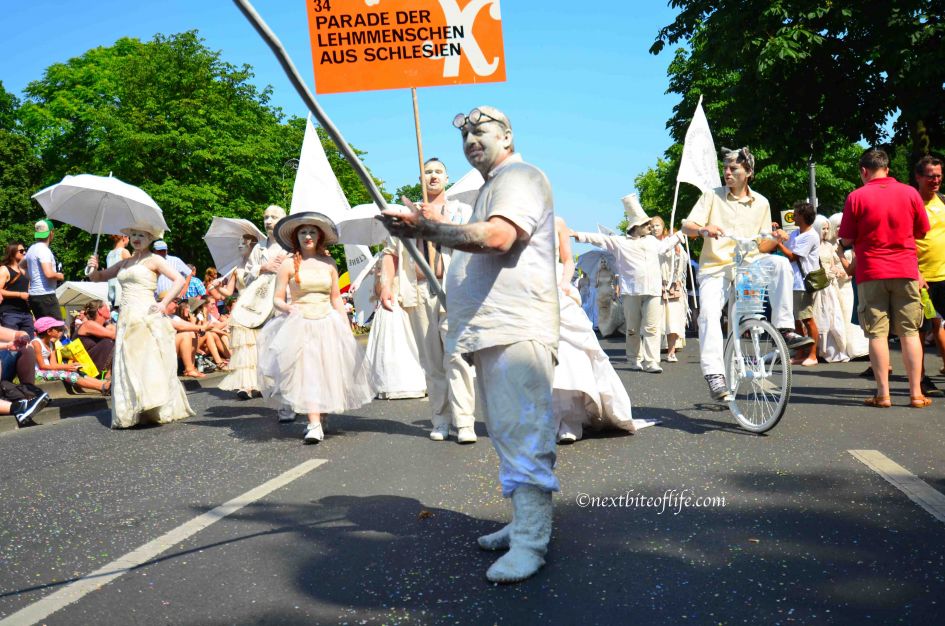 I wish l knew what culture this was. So many groups and cultures were accounted for.

Berlin has more canals than Amsterdam, a fact l was not aware of. One of the more famous ones is the Berlin-Spandau Ship Canal which runs about 7.5 miles!. Berlin is also home to some really nice beer gardens.

Victoria and her husband,  took us out for drinks one night to one of the biggest ones that was by Museum Island. Talk about standing room only. Every seat was taken and we had to hunt around for about 25 minutes before finding space to sit. A lot of people were sitting on the grass. It was very nice. The lights twinkled from the island, and from the trees. It was a great night. We got lost again of course, but thankfully, they found us!!! Those street names are so hard to pronounce.. :o).

We visited another  beer garden that was close to the zoo on our own. That one was my favourite of all. If you visit Berlin and the zoo, you can’t miss it. There is a huge sign for it as you exit the zoo. It will be on your right, and is about a 4 minute walk. It is a big garden, and apparently very popular as it was packed! The atmosphere was really cool, people of all ages just having a good time chilling with beer and some food. It was a hot day, and l gotta tell you, it was a welcome relief under the shaded trees.

Apart from the carnival, we also got to see some pretty cool things in Berlin in addition to Kreuzberg. It was fun discovering Alexanderplatz after seeing it in so many movies. A walking tour of Berlin is fantastic for getting your bearings and learn some amazing facts about Germany.

Must Visit Places In Berlin: 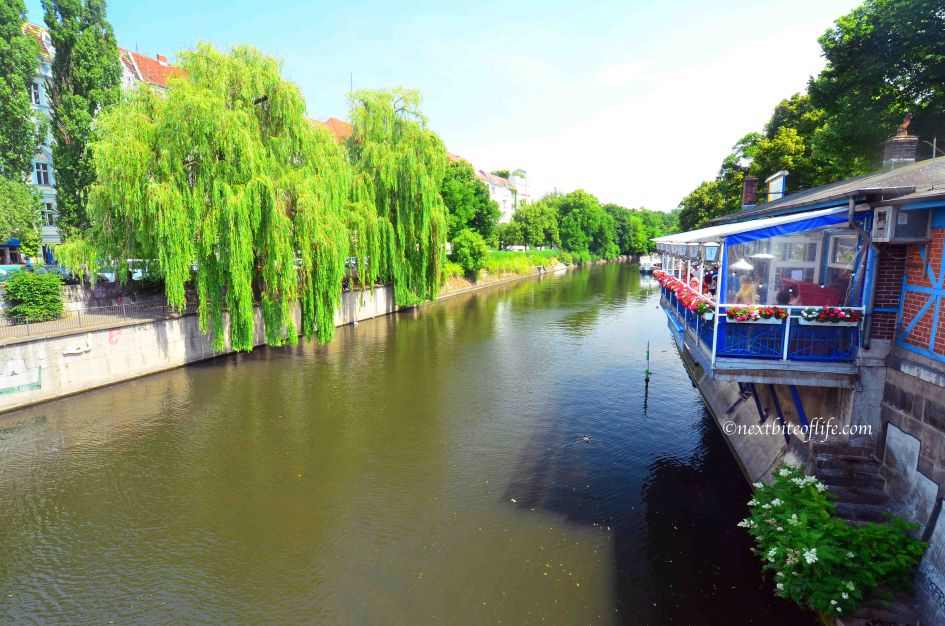 Berlin Canal view Kreuzberg, the neighbourhood we stayed in. Very funky and vibrant area. I would recommend staying there. 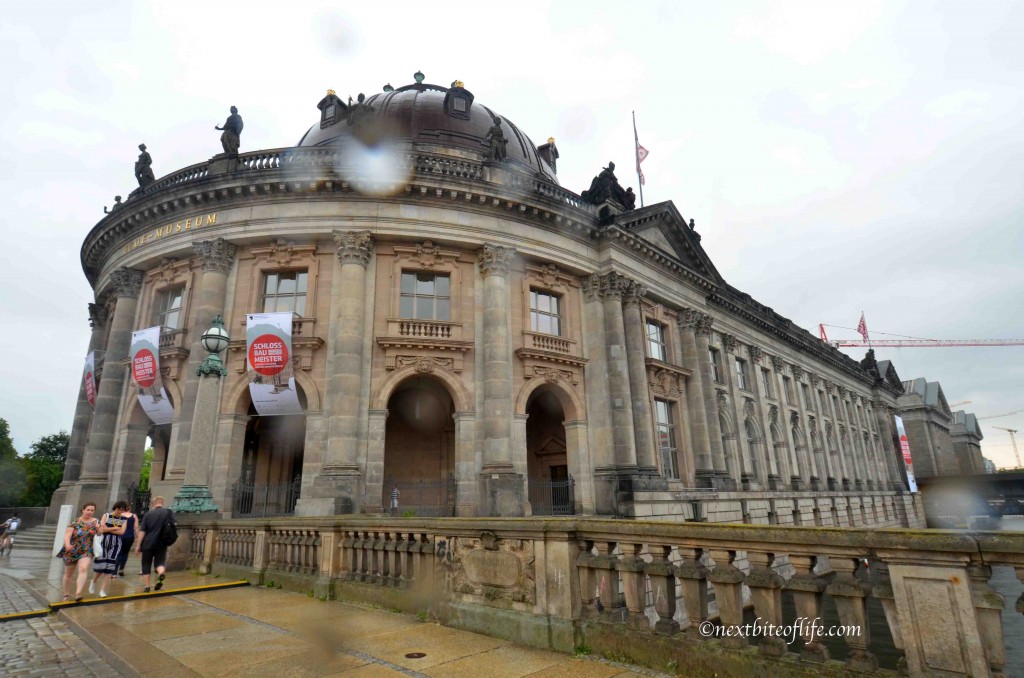 Berlin’s Museum Island. There is a really cool biergarten just on the other side of the river. 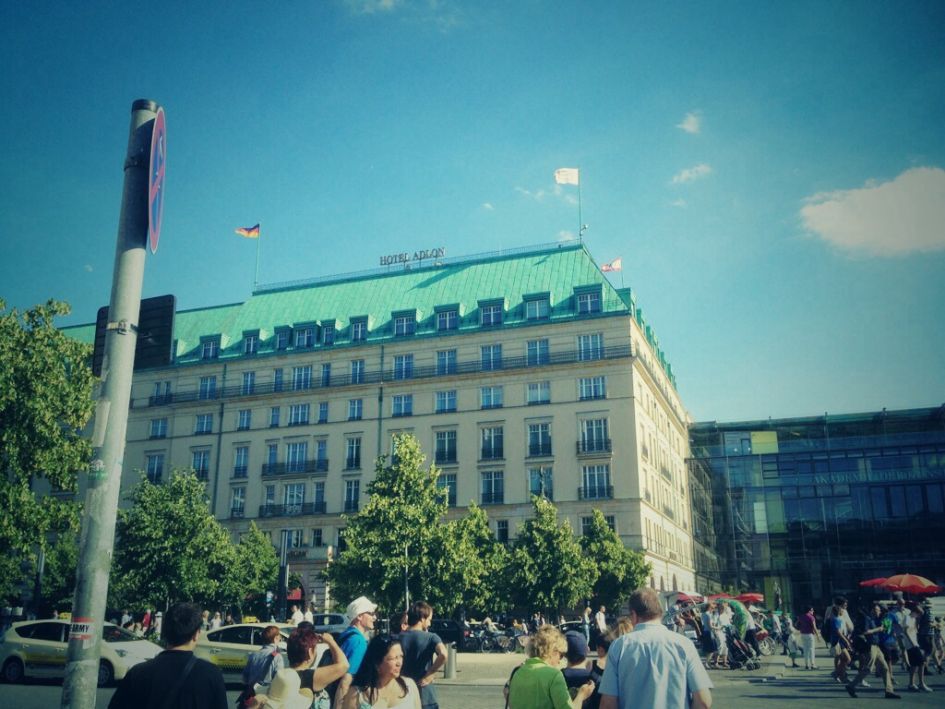 Adlon Hotel – My husband wanted to run in there and say “is this some kind of joke?” a la Liam Neeson in the movie “Unknown”. If you haven’t seen that movie, you need to. Great suspense! check room availability at the Adlon hotel. 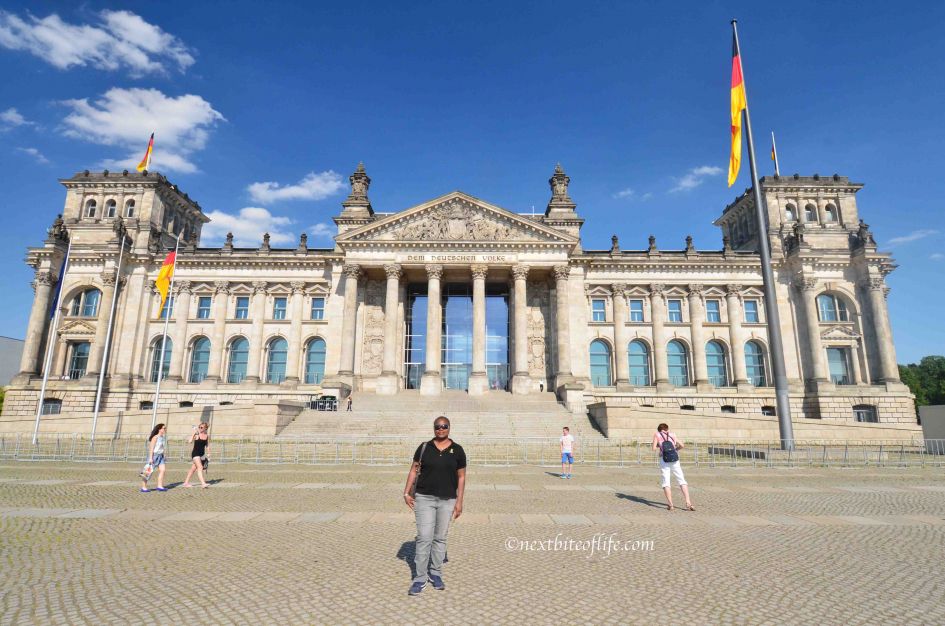 The Reichstag in Berlin. All l could think of was “Hogan’s Heroes” :-) 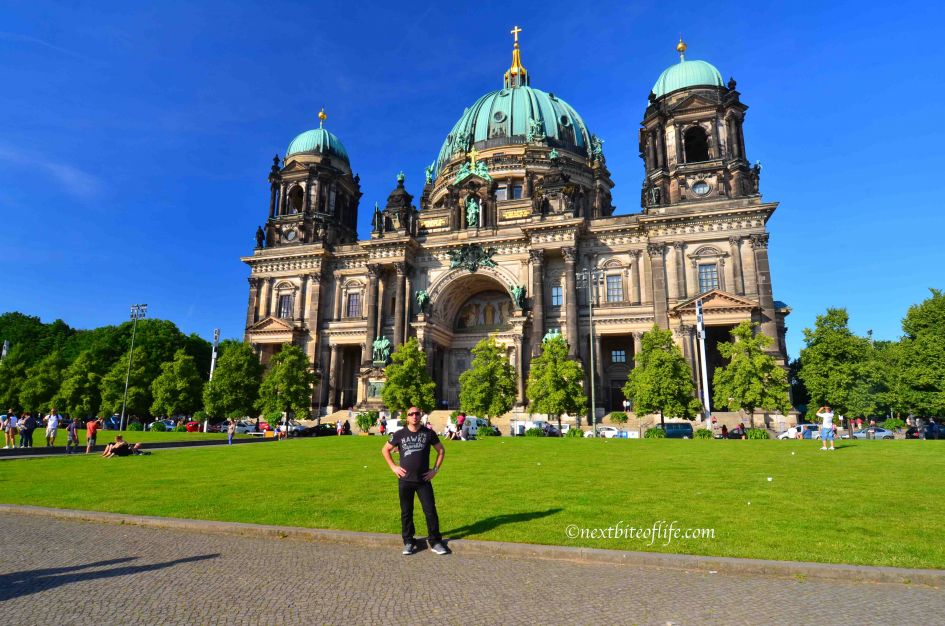 The Supreme Parish Church, the Berlin Cathedral in the Lustgarden area, a great big park perfect for picnics and people watching. Beautiful isn’t it? 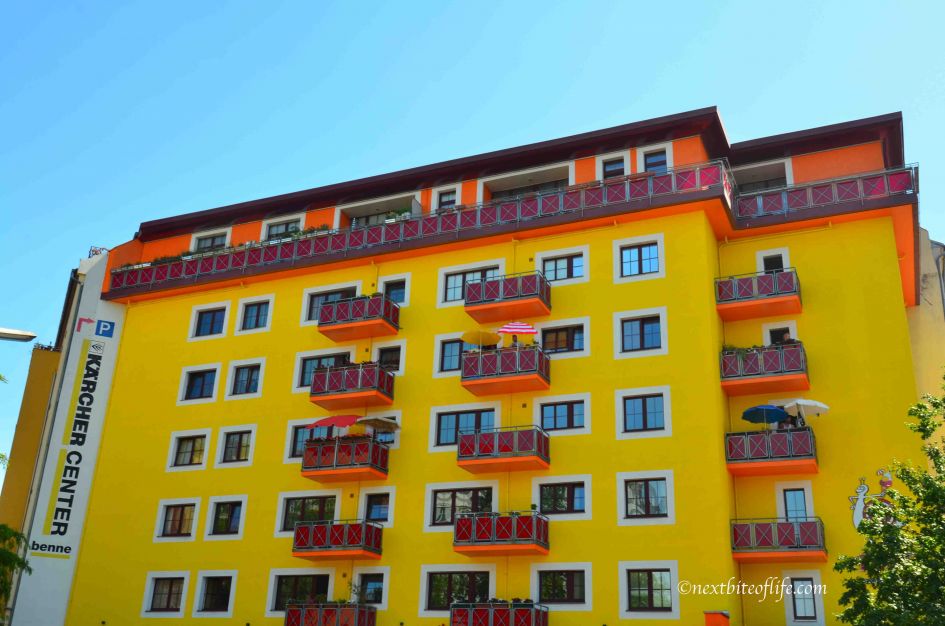 Colourful Berlin buildings abound. Given the history, I didn’t expect that much colour to be honest. 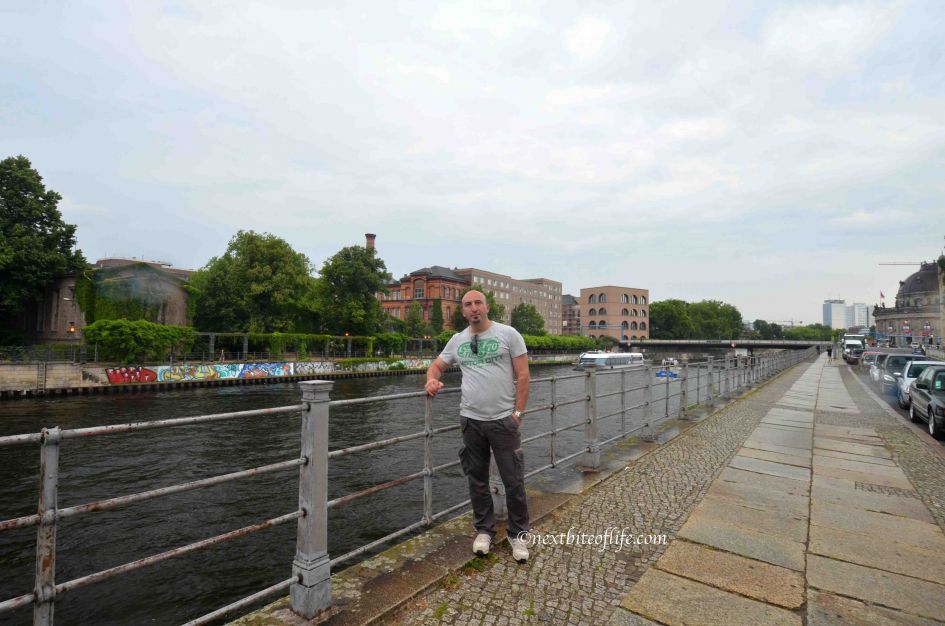 View of the Spree River that cuts through Museum Island on a rainy day. 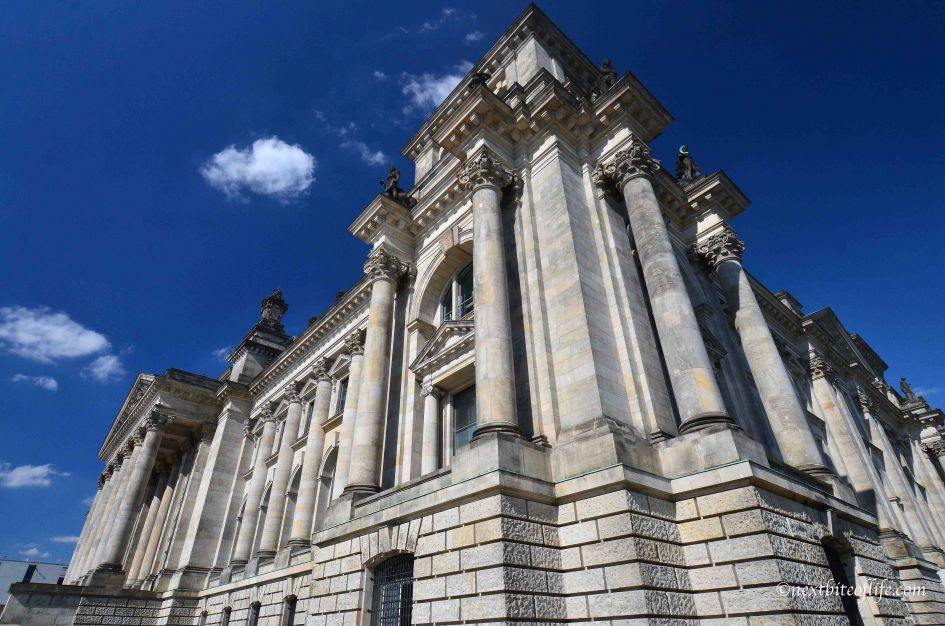 Majestic Buildings were everywhere. I had expected all the buildings to be just as dull.

One thing l noticed in Berlin is that, if you are an alcoholic, you will love it there.. :-). You can drink and carry your beer everywhere. On the subway, we saw several people drinking even though you’re not supposed to. No one complained though. I guess it’s a familiar sight. Beer is definitely cheaper than water. At the market, a 500ml of Berliner Pilsner (which we loved) or Becks was 86 cents!!

At most cafes, we paid on average €1.20 for the same. Our one altercation was at a cafe. My husband asked for water. We saw the waiter go to the tap (open kitchen), put water in the glass, no ice even, and brought it to the table. My husband downs it because he was very thirsty. I opened the menu looking for a drink to order and notice that a glass of water is €2!!!! We call him over, and in miserable German, l confirm that it is €2.

Of course my husband refuses to pay. It’s highway robbery and we end up walking out. So, my advice to you is, when in Germany, and at a restaurant, do not order water!!!! Really, its like that all over….as explained to me by a Berliner. Bottled water is big, they try to discourage drinking regular water and sell both for the same price. Lesson learned. 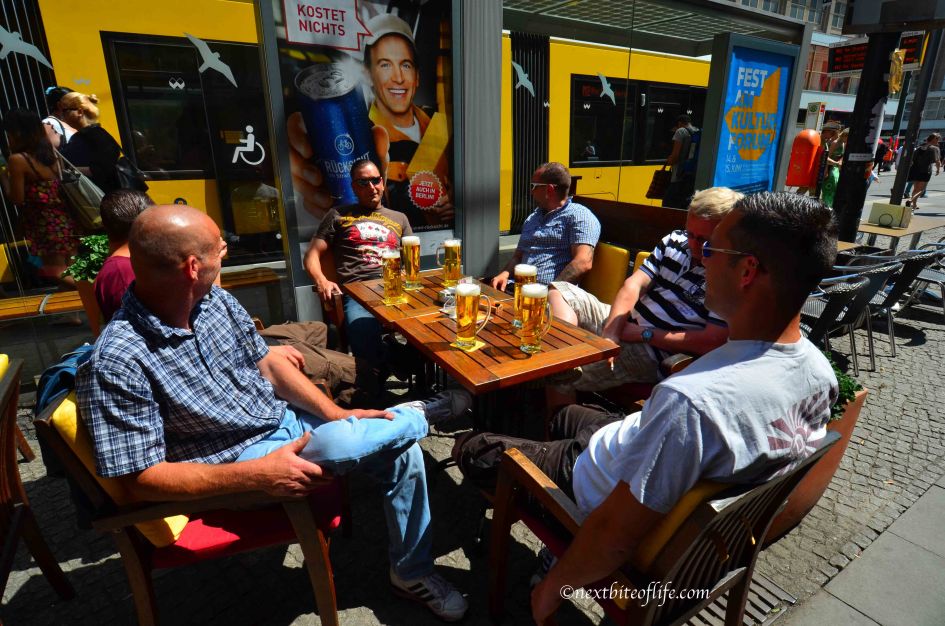 Order beer like our new friends here! Doesn’t the beer look inviting? and cheap too! 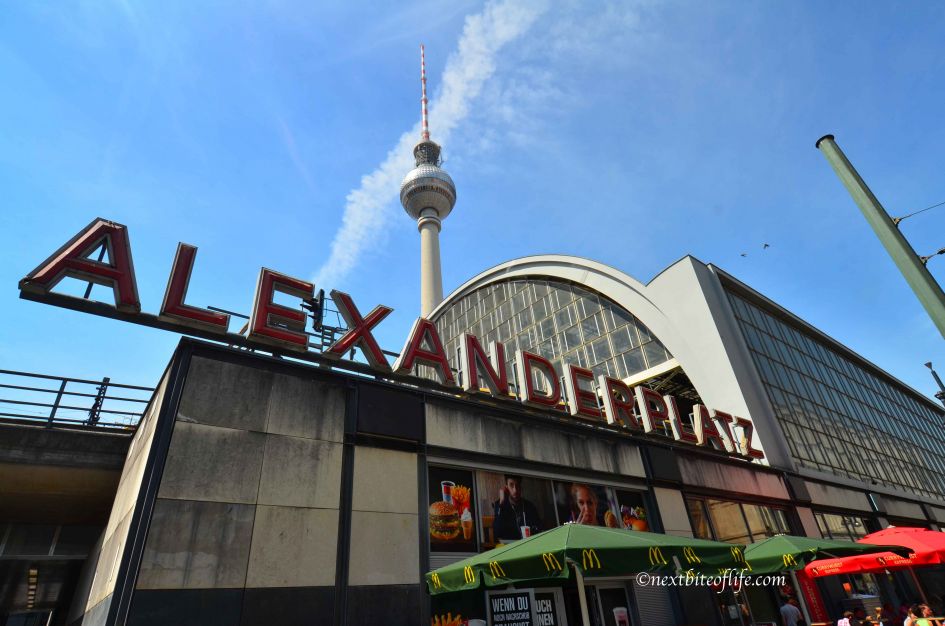 Alexanderplatz! We got lost a lot, sometimes on purpose. We just looked for this tower from wherever, and made our way there. It was our beacon. 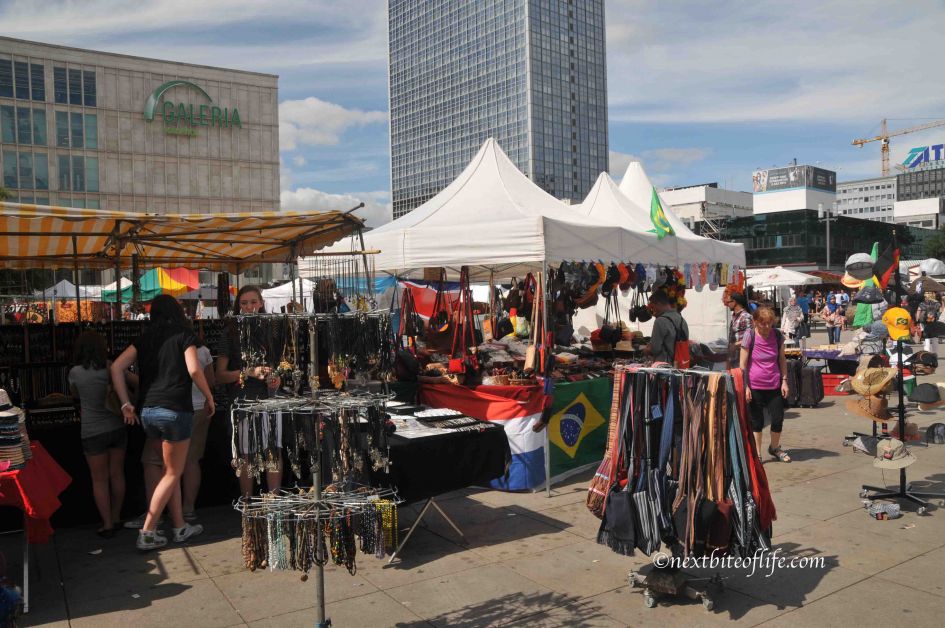 Flea market from where you can buy everything from hand made jewelry to fake designer bags and more. 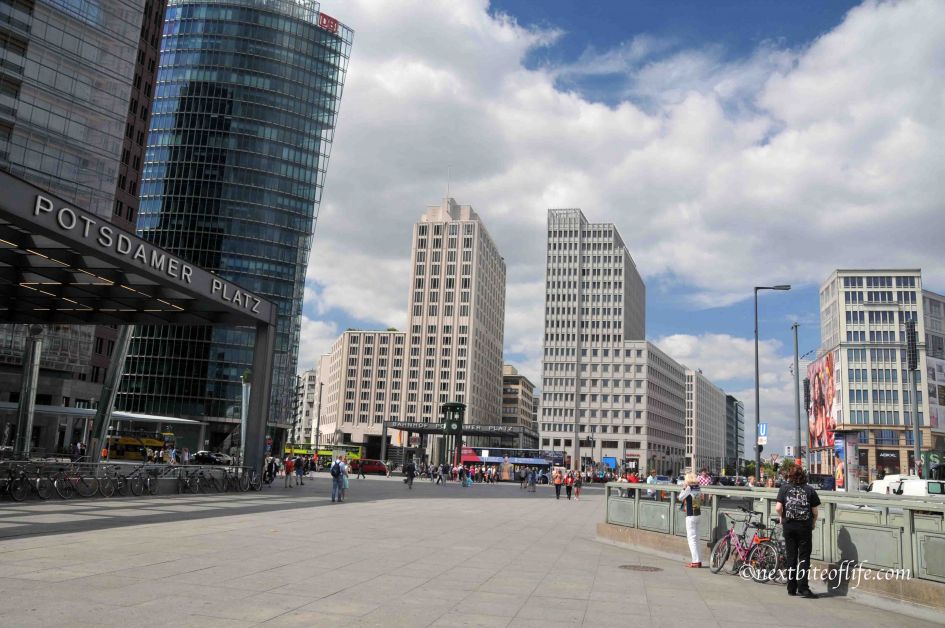 Potsdamer platz. Lovely area! The restaurants were pricy compared to the rest of the city we thought.

This monument was designed by Heinrich Strack and it is to commemorate the victory over the Danes by the Prussians in the Danish-Prussian war (Feb 1, 1864 – Oct 30, 1864). Now a famous icon of Berlin. There is a bronze statue of Victoria (the goddess of victory) added later on to mark other victories. The statue weighs 35 tons! and Berliners fondly call it Goldelse of “Golden Lizzy”. There are awesome views of Berlin from the top we’ve been told. 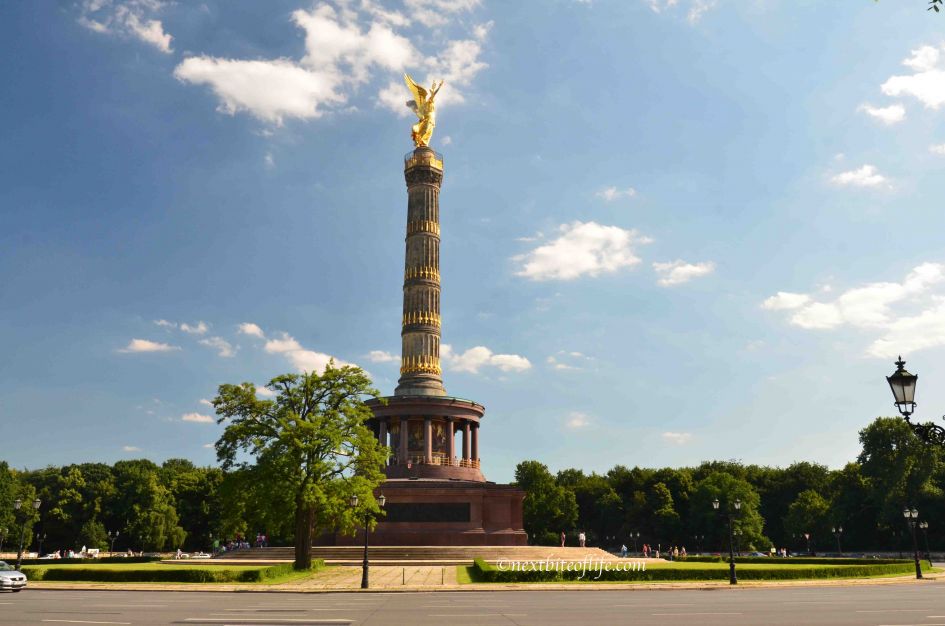 Berlin is such a big place, and it was of course impossible to see everything, but sometimes these are the best kind of trips. A little taste that keeps you wanting more, and leaves you with a good taste in your mouth as well as a desire to revisit.

Have you been to Berlin? Do you have any plans to visit Berlin? or is it not on your bucket list?