Reverse Culture Shock Back In The USA? 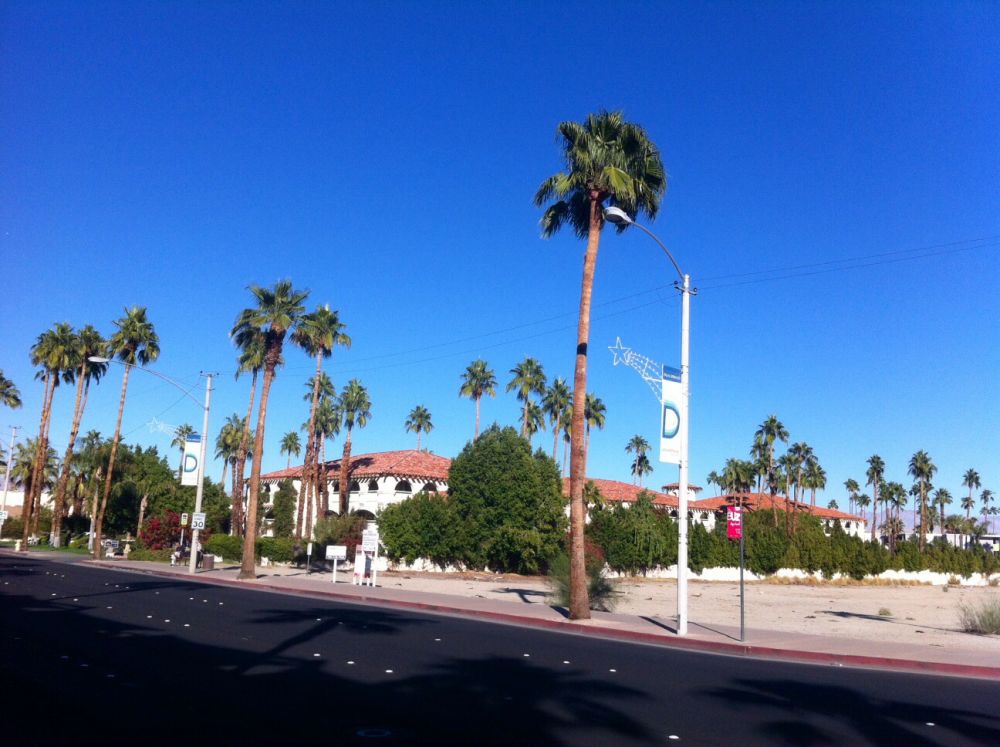 Reverse culture shock was very worrying to me prior to our return trip to the U.S. Having been away for the last several years, I was afraid that we would have a hard time adjusting to a return back to the States.

Thankfully, it was not as bad as it could have been. The gods smiled upon us and made things easy. A lot of my relatives are extremely happy right now. I had been complaining a lot. 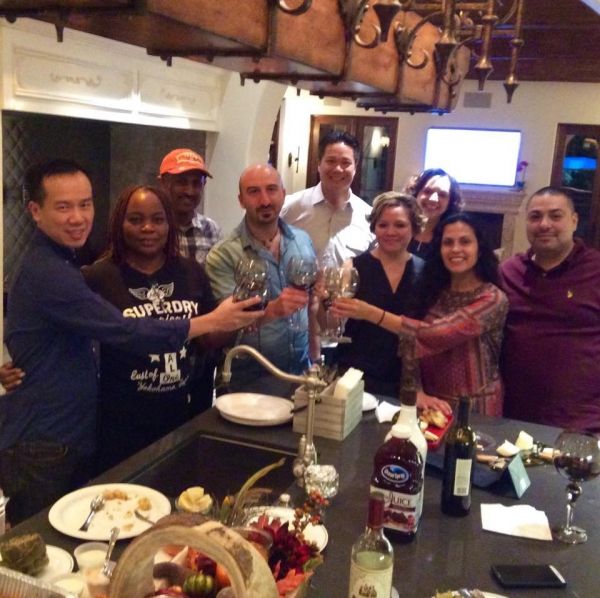 Hanging out with old friends in L.A

What is culture shock?

The official definition: The feeling of disorientation experienced by someone when they are suddenly subjected to an unfamiliar culture, way of life, or set of attitudes.

Reverse culture shock on the other hand is the psychological and emotional distress that can happen when one has been away from their home country for a long time. This can lead to difficulty in adjusting to their old life because it has now become unfamiliar. 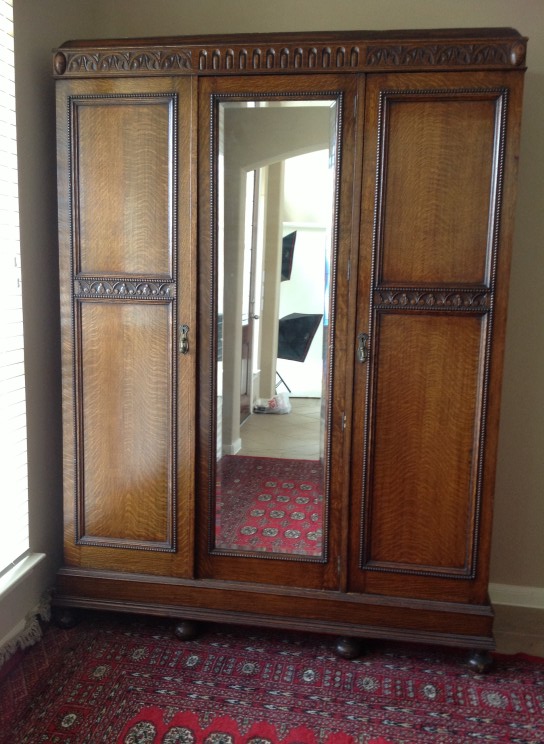 One of the antique pieces we had to find a new home for. Being away from the U.S. has quelled my obsession with spending to buy frivolous things.

Clearing out our storage space:

Our main reason for visiting, apart from seeing old friends and family was to clear out our storage space which had just been costing money monthly. Once the decision had been made to stay overseas for the foreseeable future, it was the right thing to do. Reverse culture shock set in as we realised that the U.S. as a whole is like one big commercial for consumerism.

All the expensive things that we had thought we couldn’t live without now seemed like a waste of money. Memories are what counts. It was unemotional giving away costly toys like two Bose 3-2-1 systems, Playstation, Nintendo and Wii. Yes, we had all three. What wastefulness. 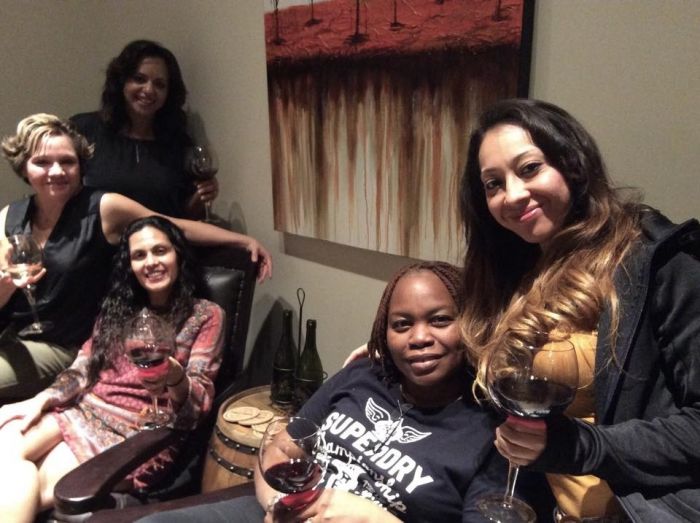 Hanging out in the wine room while the guys watched the fight. This was the best part. Shared memories, not things.

Reverse culture shock is a very real thing, and can be traumatic for a lot of people. It’s not unusual to feel like strangers in their own land after being away for a long period, fall into depression and require a period of adjustment. I was curious to see how l would feel being back on U.S soil.

Part of me was thrilled to be back. It was great to hear English spoken all around me. It actually takes a while for it to hit you. Living in Spain and mostly only hearing Spanish, I am used to tuning out a majority of conversation. When you realize you can understand what everyone is saying, it feels good!

Always a big one. I have mentioned before how bad customer service in Spain is. Back in the States, it was a shock all over again to have great customer service where employees were polite, and you weren’t terrified to purchase something because you could return it if it didn’t work out, something pretty much unheard of in Spain.

It felt great driving on the freeway, like l had just done it the day before, and not almost three years prior. I didn’t have to worry about roundabouts and how to merge unto them. People obeyed traffic rules for the most part, and there was order, not chaos, even with traffic. Sometimes l felt like l was a viewer, but not an outsider. 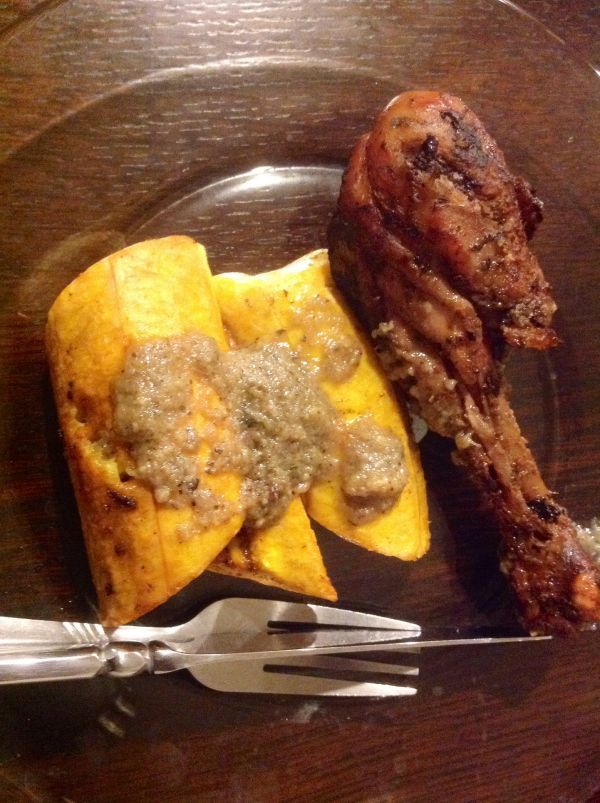 A meal courtesy of our Airbnb host. Plantain and grilled chicken which was fantastic. The plantain not so much to me as it was not as ripe as l like it. He also made fantastic French toast and scrambled eggs. Food was very much a focus of our trip.

Culture shock experiences in the U.S – One of the first things that struck me was how expensive everything in the states seemed to have become. One of our culture shock stories was when we had lunch at a TGIF restaurant, and there were very few customers. We realized why upon seeing the menu :-( . Things like a plate of ribs which were $9 before were now $19.29, double and then some. Even the lunch specials were priced much higher. I guess l am used to the prices in Spain :-) .

The portions are also much smaller than l remember. Meal times are earlier than we are used to now, but it was no big deal. Siesta, we still haven’t adjusted to in Spain, so we were out driving (stuck in traffic more like) visiting with friends and family. Prices in the department stores are also higher.

Christmas decorations were already put out, many months ahead of time. There were so many commercials for everything from cars to drugs, to accessories, constant bombardment. Consumerism culture is still very much alive. I realize l don’t miss it at all. Buying does not intrigue me, not any more. I realise it is a vicious cycle of temporary excitement at purchase followed by debt and regret. We have fewer things, are debt free and we like it that way. 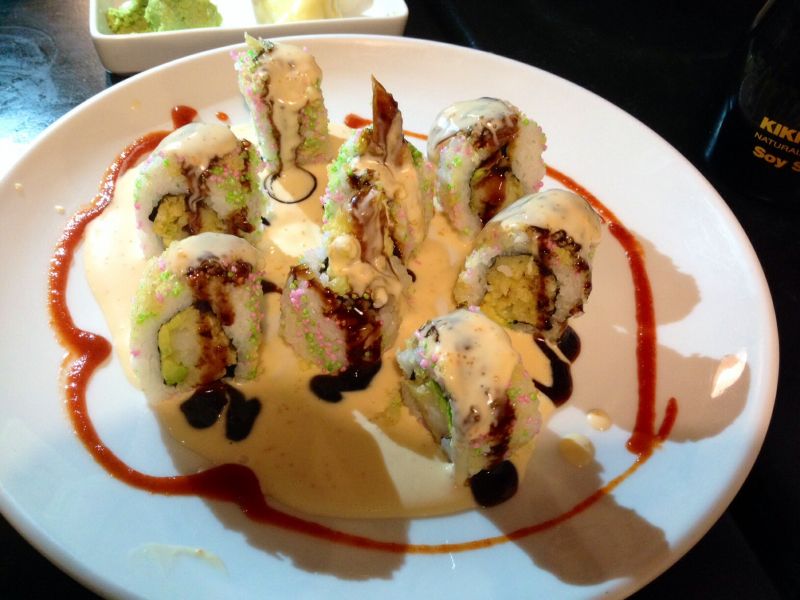 The most amazing crunchy roll from my favourite sushi place  in Los Angeles. Still as wonderful as l remember.

It had been almost five years since we were in L.A last. I have to say l am not a big fan of the new construction that is springing up everywhere . So many high rise apartment buildings. It seems almost claustrophobic. It’s going on everywhere, from Hollywood to West Hollywood to West L.A.

I barely recognized the Century City Mall :-( . L.A traffic still sucks balls!!! The 405 freeway is still a parking lot during rush hour. It took us 2.5 hours to make a 16 mile journey one day. I told my friend it would be the last time l would visit him.. :-) . The population seems to be exploding. It made me long for the days of old. 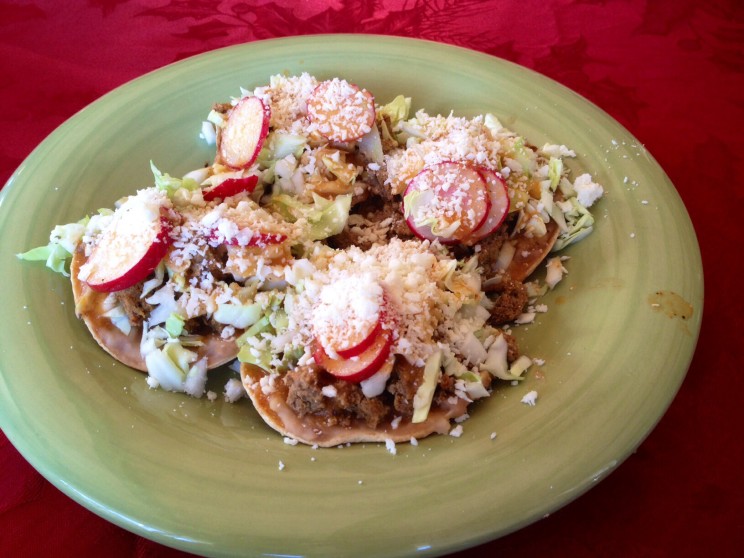 Surprise: Some people are curious

One thing l found surprising was that most of my friends were very curious about our travels. They asked loads of questions and most admitted being envious of the life we chose and hoped someday to be able to travel more (after the kids were grown etc) . I had fully been expecting them to not even mention it, but nope..they wanted to know everything..genuinely interested.

I had fully expected noone to care from what l had been reading from fellow travelers who had made the visit back home. The popular opinion was that your friends and family would be so busy with their lives, they couldn’t care less about yours. While we found this to be true with some, most were curious and prompted me to recount stories. 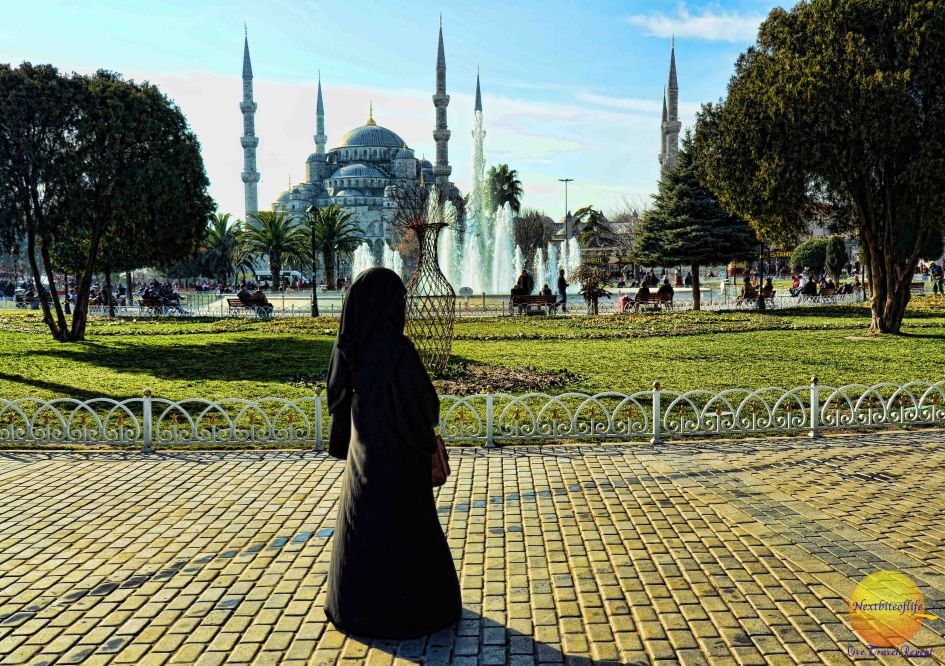 They loved hearing the stories of our travels to faraway places like Istanbul. Places they could only dream about.

Perhaps my favourite reverse culture shock. A lot of people who have moved overseas, especially to parts of Europe will agree with me that places like Spain, Italy and France are pretty dirty. I hate the fact that people don’t pick yp the dog mess. The cities smell of pee, and raw sewage sometimes, thanks to the old, old draining and plumbing systems that are impossible to fix in the modern days. It was nice to see the streets clean and poo free :-).

Culture Shock In Reverse: Blending In

What l am really grateful for is how seamless coming back has been. We stayed the first week at my friend’s mom’s house in North Hollywood, and she spoiled us rotten, just like she always did. She made all my favorite food from El Salvador, like Pupusas and plantain.

We spent time at our friends’ house in Palm Springs, overlooking a golf course and with the hulking mountains above and reminisced  about the old days. My best friend from Bermuda joined us for a week, and it was a fantastic time, laying around the pool, talking late into the night, cooking together and eating out, mostly Mexican food, something we sorely miss living in Spain.

Family is not just blood relatives, it’s also people that you allow into your life, the ones that have your back and rejoice in your success, pick you up when you’re down and will call you on your s**t :-). Only two people so far have asked if we would ever move back, most want to join us :-) . Our answer so far has been no (me) and at some point in a few years, yes (Fede) . There is no right answer by the way. We only have to worry about us, so our decision might take all of five minutes or less :-) . 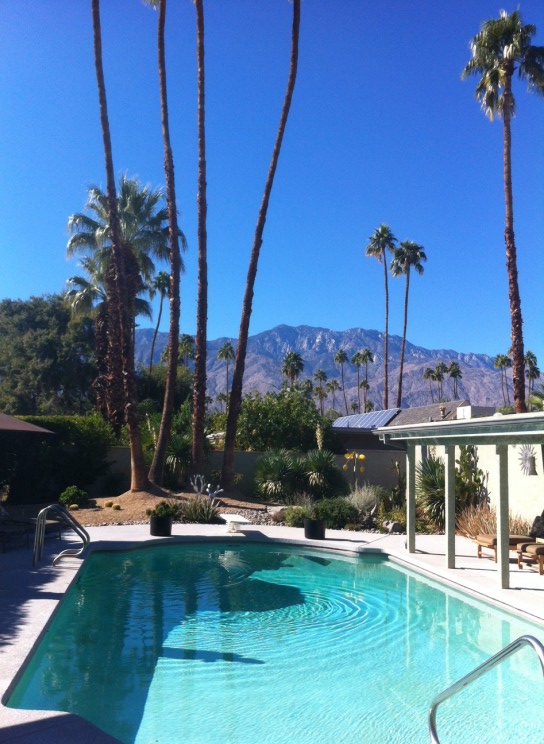 Our friends house in Palm Springs. The water was warm and inviting.

How to deal with reverse culture shock:

Very little cause for concern. It’s okay to feel apprehensive about returning to your home country, but it’s not that scary. Give yourself a little bit of time to adjust and accept things for what they are. 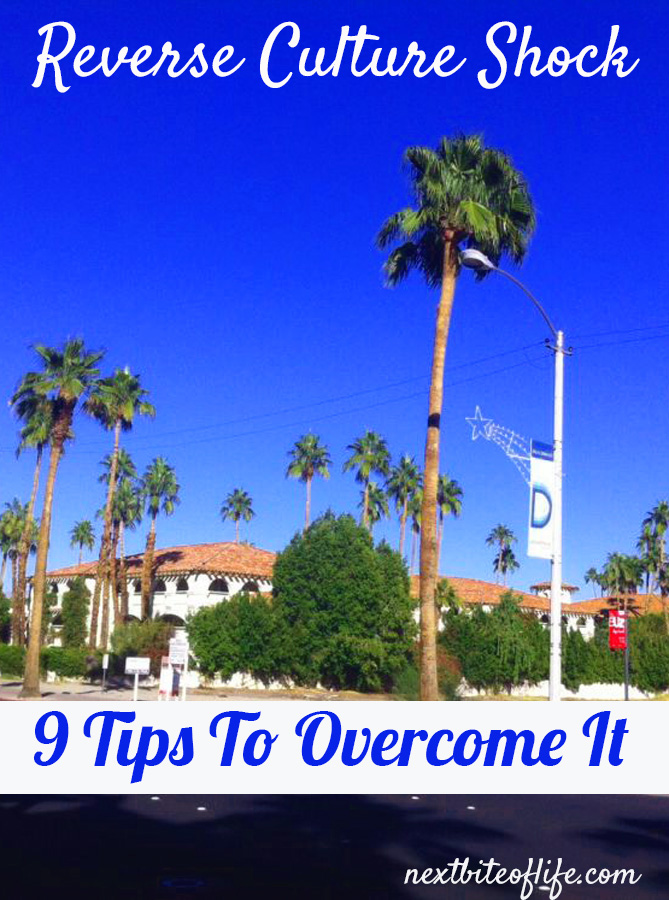 Have you ever experienced reverse culture shock? If yes, how did you deal with it.