Sushi Karen – One of the best in Los Angeles. 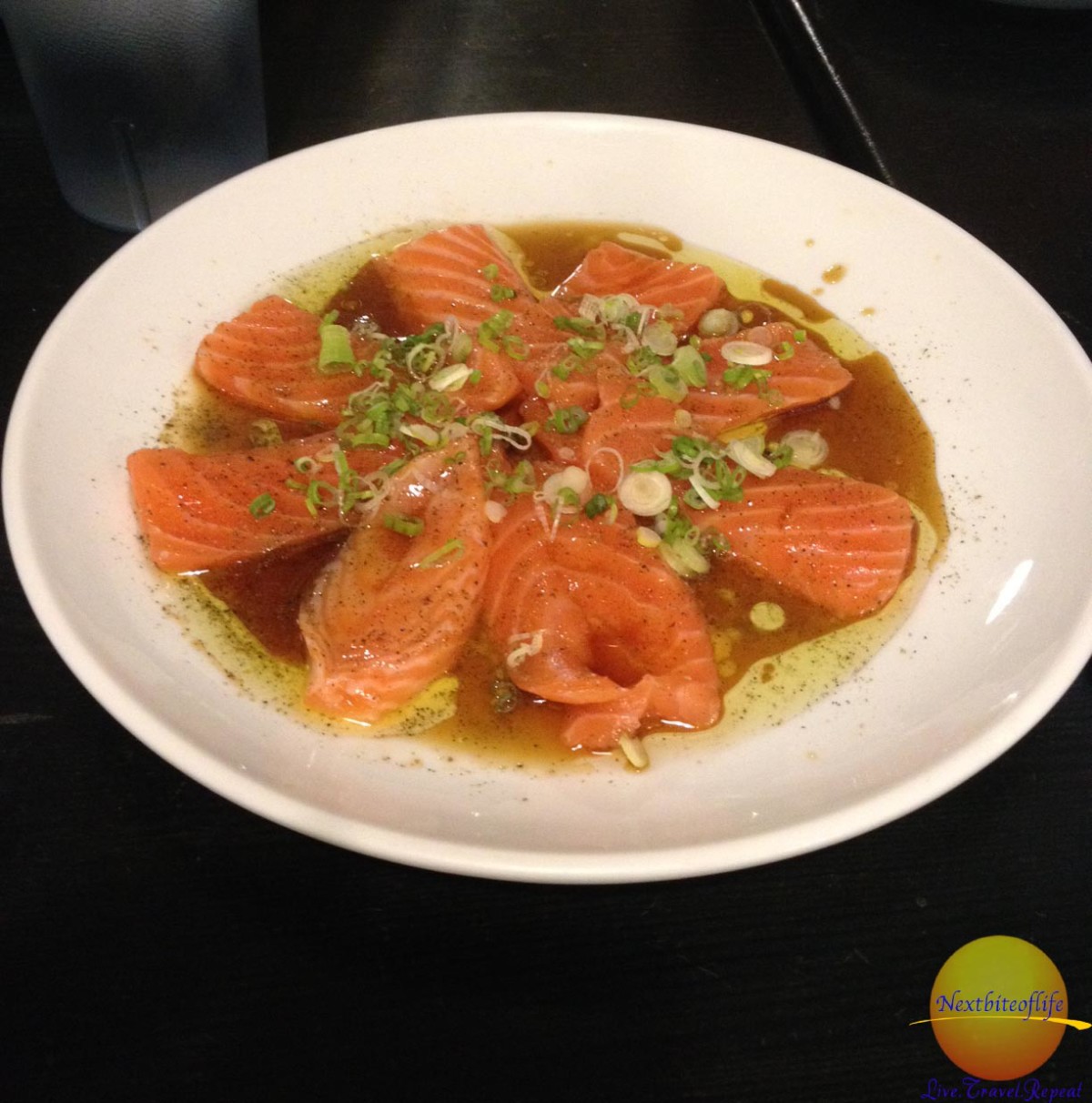 Salmon Carpaccio in truffle oil. Hands down our favorite.

Sushi Karen is one of those little places that you find by accident. You know, you’re hungry and look around for someplace to eat. You spot this sushi place and decide to give it a go. It doesn’t look fancy, just a regular neighborhood joint. You resign yourself to average food, them Boom! your taste buds are aroused by the simply amazing and tantalizing delicacies that Sushi Karen has to offer.

From then on, you’re hooked. You find yourself coming back again and again. You’re almost reluctant to tell others about it because you’re afraid it will then turn into one of those horrible, pretentious “upscale” sushi places. Fear not. It remains the same wonderful little place, run by the same man. 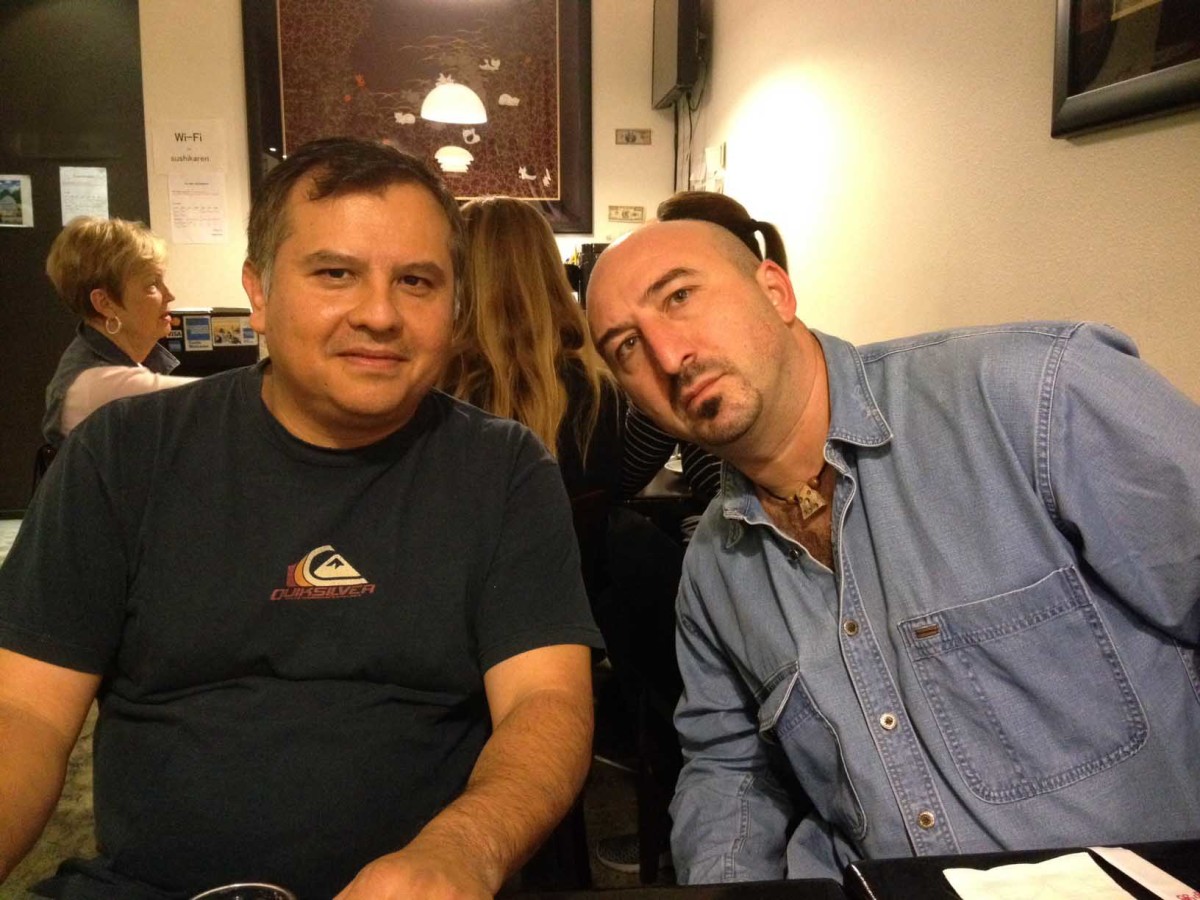 Where to eat the best sushi in L.A? Sushi Karen. Ready to eat they were.

Sushi Karen is technically located on Washington Boulevard in Culver City. It is very close to the Sony Studios and is frequented by a lot of people from there. The first time l went there was about nine years ago. It was with my friend Ro. Up to that point, my favorite sushi joint was in Studio City and Sushi Karen was his. Upon visiting this place with him, l had to admit it was way better than the one l had been frequenting, so my allegiance switched :-) .

I became a huge fan of Sushi Karen and ate there as often as possible until we moved to Texas. Just before moving, my friends and l went out for a last dinner there. I went back once on one of our trips back to L.A and l was happy that he remembered me. Every so often, Ro would send pictures of sushi just to make me envious..twat! ;-). I have had the pleasure of eating at lots of sushi restaurants, not just in Los Angeles either.

Some sushi restaurants have cost upwards of $300 per person! (In the good old days when Big Pharmas were still picking up the bill of course ;-). I miss those days..a lot.. ). I can assure you that the Sushi Karen can roll with the big boys at a fraction of the price. 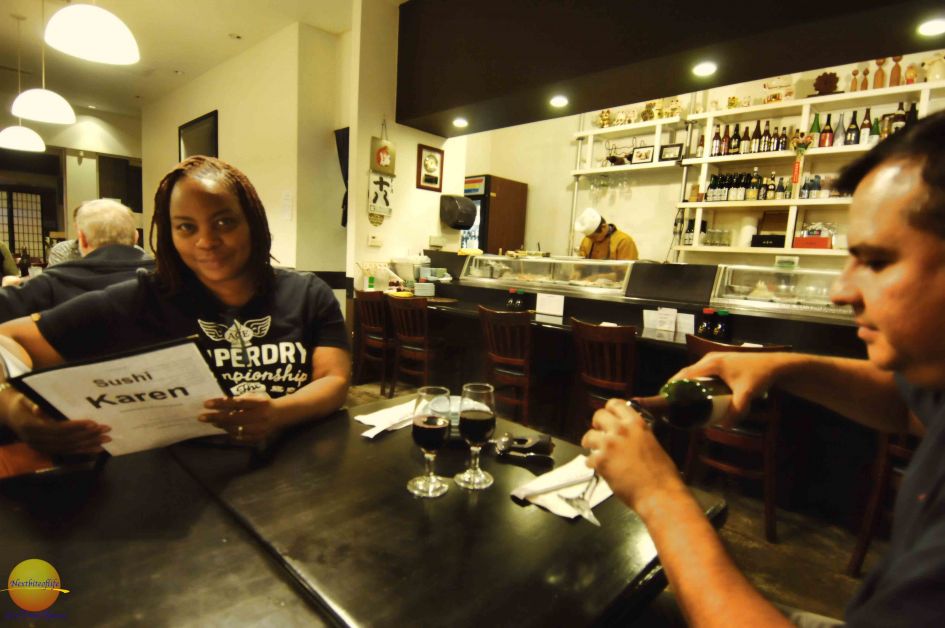 Sushi Karen: Best sushi to have include 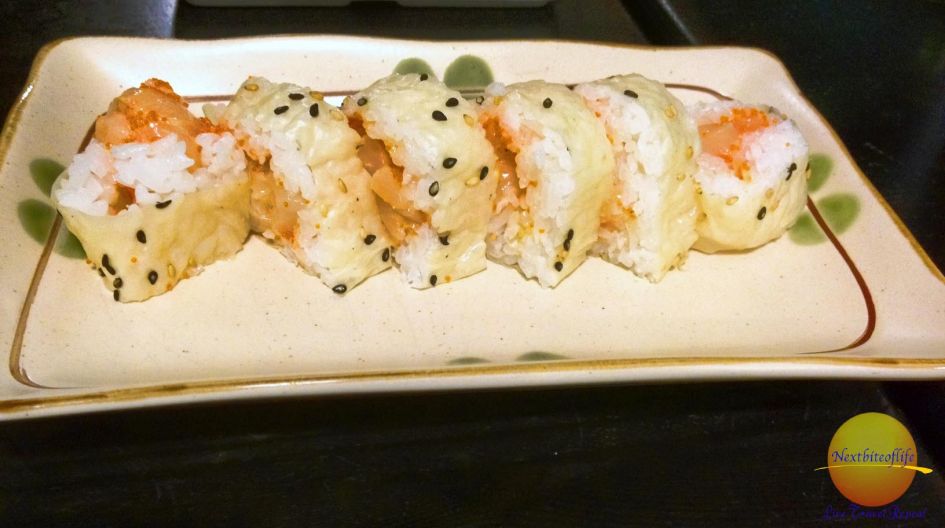 Tempura shrimp with sesame seed and special sauce. Best affordable sushi in Los Angeles for sure.

I had been craving it for so long, we made it a mission to eat there the day after we landed in Los Angeles. For some odd reason, Federico had never eaten there, so he was a bit skeptical. He said afterwards that it was the best sushi he had ever had. I was not surprised. Ro and him decided that if they were ever to become thieves, they wouldn’t waste time robbing banks. Nope…they would come rob Sushi Karen of its fish..hahah! ;-). 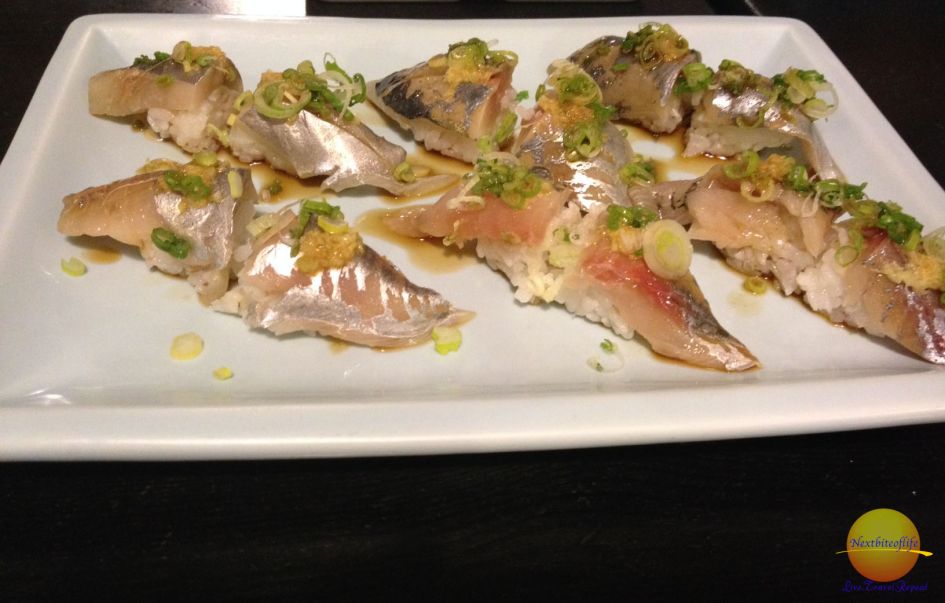 Spanish mackerel..yum! One of the best sushi places in Los Angeles. I really love this unassuming sushi restaurant. 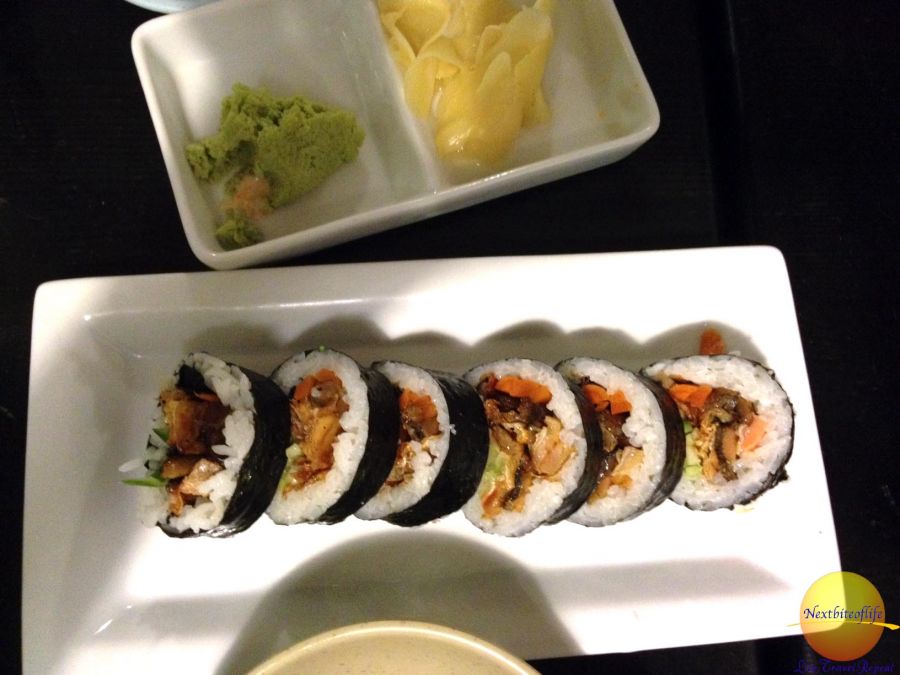 Sushi Karen is owned and run by a lovely Japanese man by the name of Yoshi. He named the restaurant for his daughter Karen. He is there every working hour lovingly making delicious sushi. When he goes on vacation, the restaurant is closed. The place is not huge by any means, maybe seats 70 at the most, just enough to make it inviting. It is always such a pleasure to see him work, slicing and dicing.

If you get a chance to visit, sit at the bar and watch. He has fresh fish flown in from far-flung places. The salmon carpaccio is so tasty, it literally melts in your mouth. 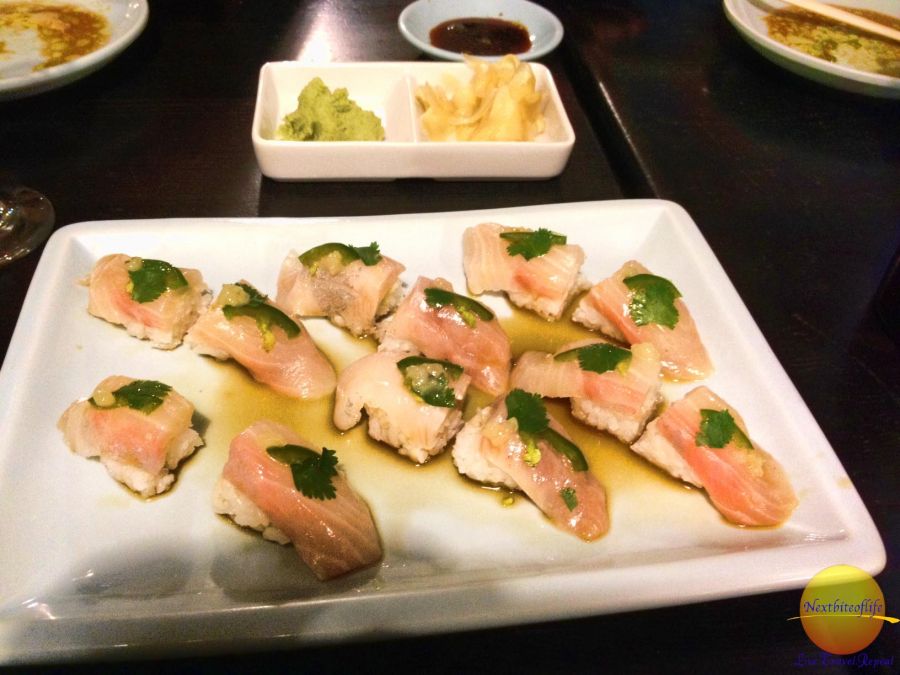 Best Amberjack at Sushi Karen. The jalapeno in the middle gives it quite the kick!

Sushi Karen serves sushi, sashimi and tempura dishes. You will be hard pressed not to find something you like on the extensive menu. Just looking at the pictures again makes me drool and long for some sushi, specifically that sushi. Federico wanted to go back one more time before we left L.A, but alas..Yoshi was off to Japan and the place was closed the rest of our time there :-(. 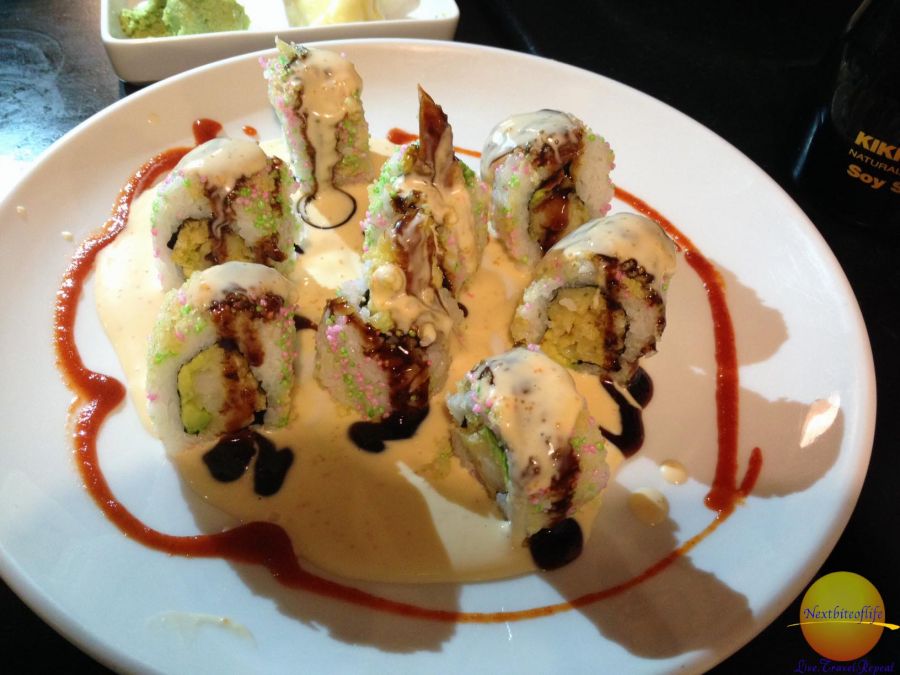 The Crunchy Roll. A very popular selection at one of the best sushi places in L.A! ..so yummy.

Do yourself a favor if you are in the neighborhood, or visiting L.A for that matter, skip the noise..and go for quality. You won’t be disappointed. You might even start keeping the little secret to yourself. It was every bit as good as it was the first time l ate there, possibly better.

If you love sushi like l love sushi, you should make your way over to Sushi Karen. Our dinner for three came to $87, a very fair price for what we had. We did bring our own bottle of wine, so it would be costlier with alcohol. 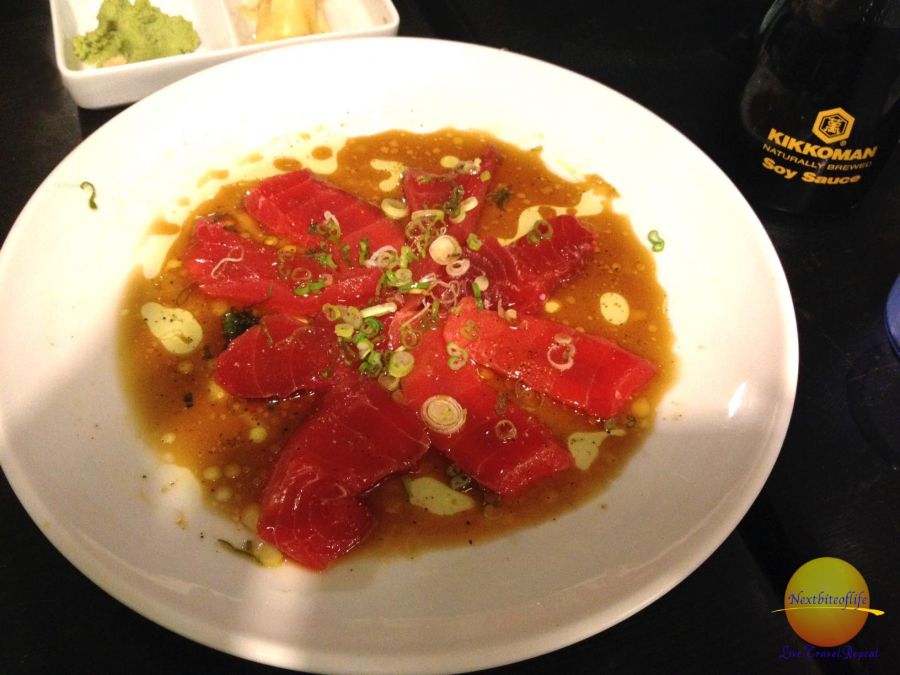 The salmon was so good, we had to have the tuna carpaccio at sushi Karen as well. 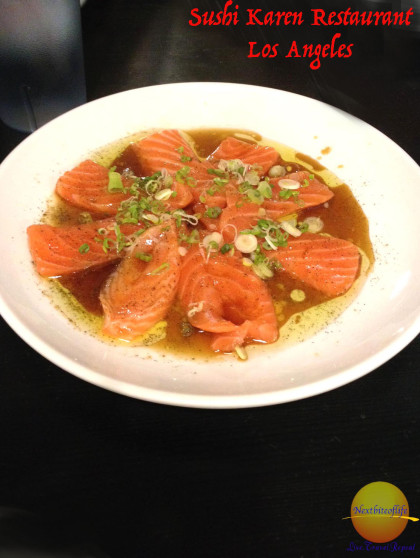 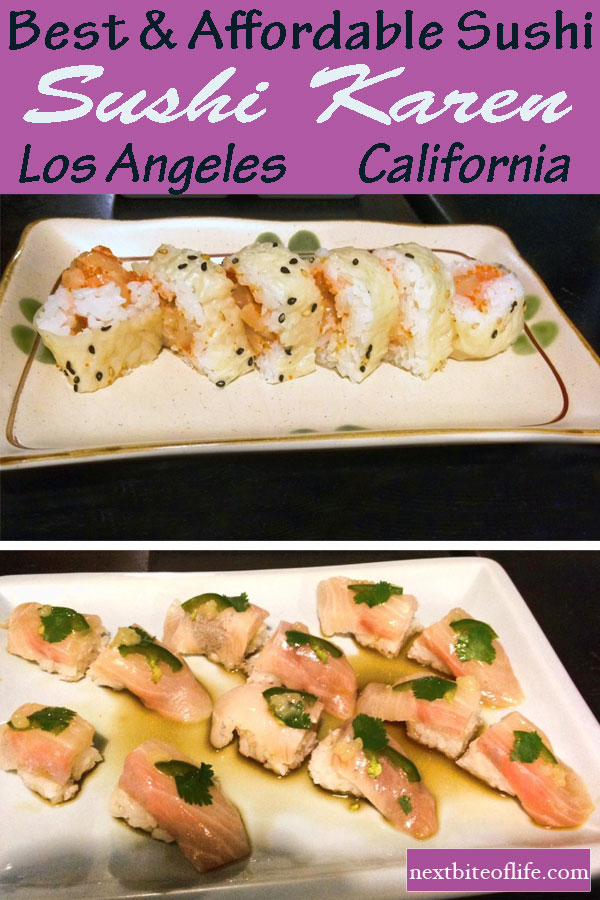 Are you a sushi lover or are you more of a meat and potatoes person? Surely there is room for both l say. Have you ever been to Sushi Karen? If yes, what do you think of it? If not, would you care to try it?