Excellent Visit to Wat Pho Temple in Bangkok. Plan on it 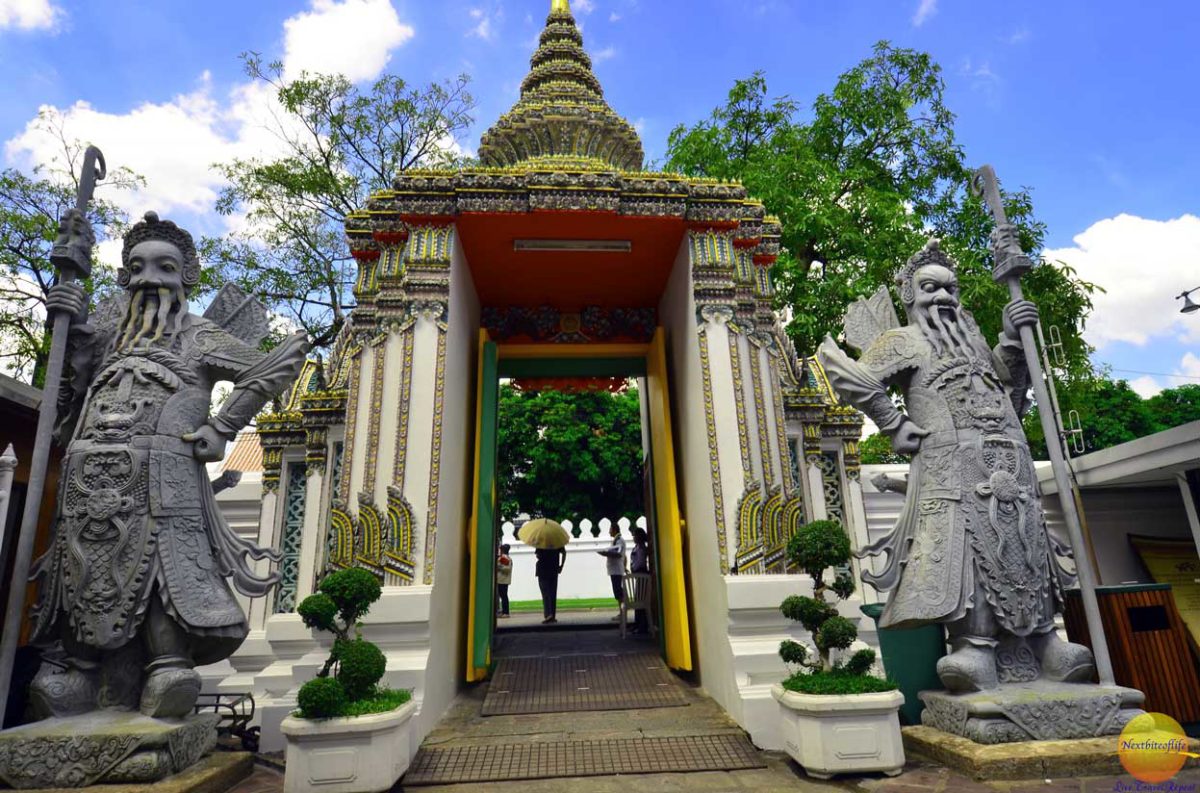 The Wat Pho Temple (Wat Po) is also known as the Temple of the Reclining Buddha. For us it was a must see on our most recent trip. Having heard of and seen pictures, we were still awed by the beauty of this massive Buddha. Our original plan had been to see Wat Pho and then continue on to the Grand Palace that was nearby despite warnings from our hotel staff not to attempt the to go near the palace.

The staff warned us it would be extremely crowded. Did we listen? Of course not. I can only tell you I’m glad we went to Wat Pho first, otherwise it would have been another uneventful day, much like our Sintra attempt. 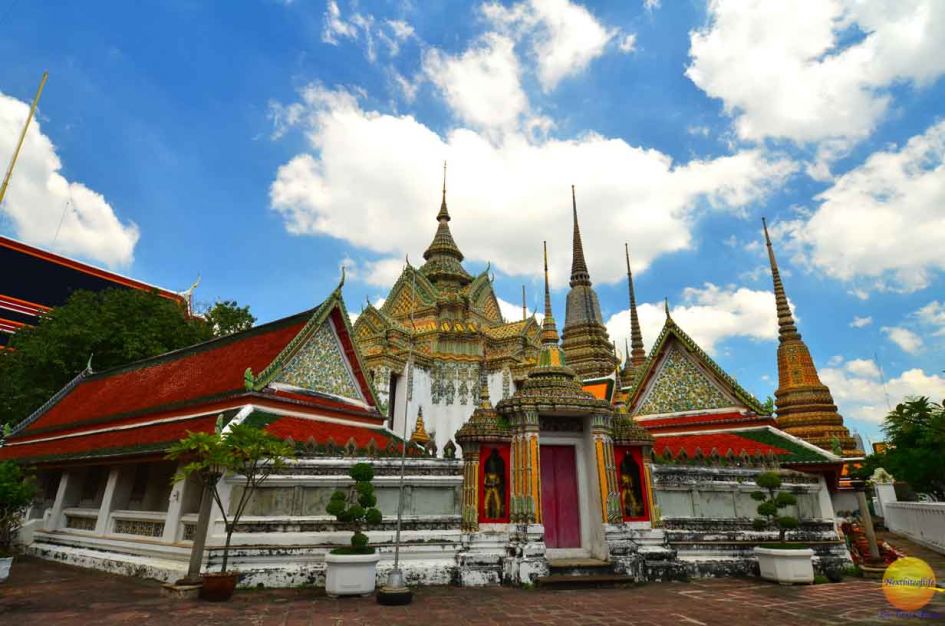 The Wat Pho temple is the top of the 6  first grade as well as first-class of the royal temples. King Rama I had built the temple on a different site but this later became his main shrine. King Rama III later expanded and renovated the temple. Wat Pho temple has the largest collection of Buddha images in Thailand. 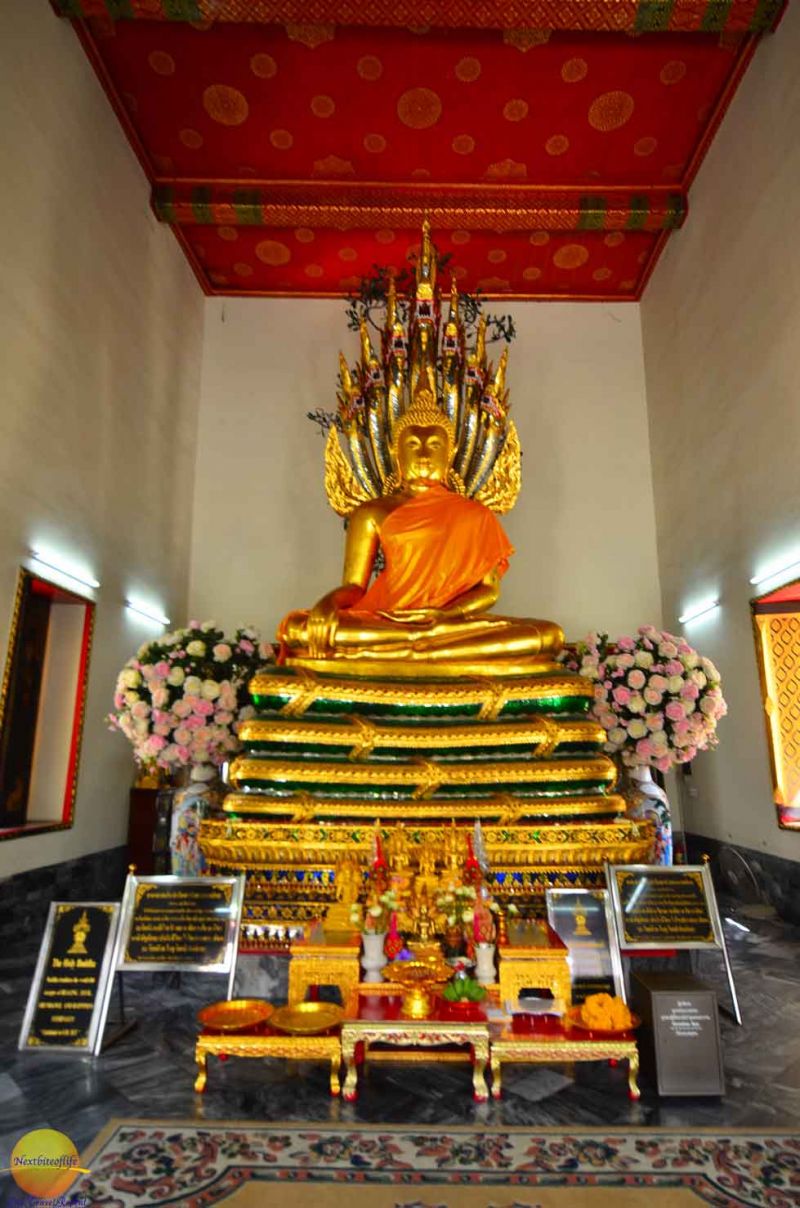 Big Buddha Bangkok:  Wat Pho Temple of course. Just one of the many Buddhas at the What Pho Bangkok temple.

I think, at least for me, my favorite thing at wat pho temple was the Reclining Buddha. The chapel, as well as the Buddha it houses were built by King Rama III in 1832. It is supposed to represent entry of the Buddha into Nirvana, which is the end of all reincarnations and transformations. The Buddha is massive. It is almost 50 feet high and 150 feet long. 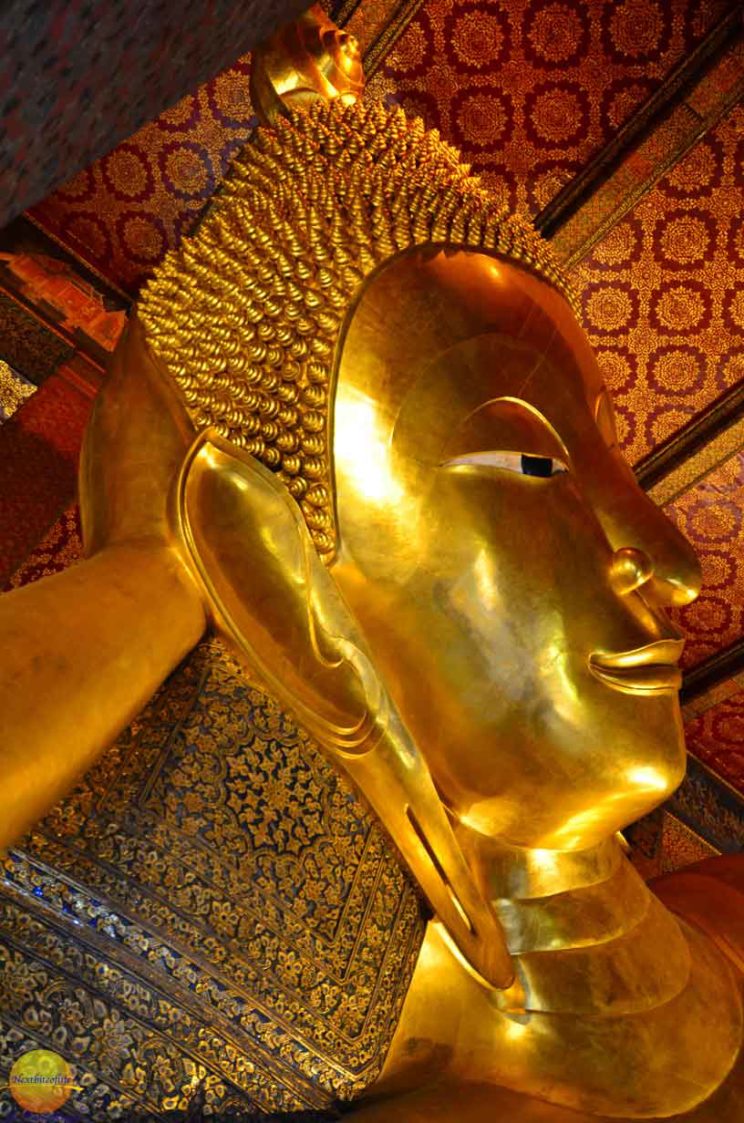 What Pho Reclining Buddha: What a grand sculpture on a grand scale. one of the top things to see in Bangkok. 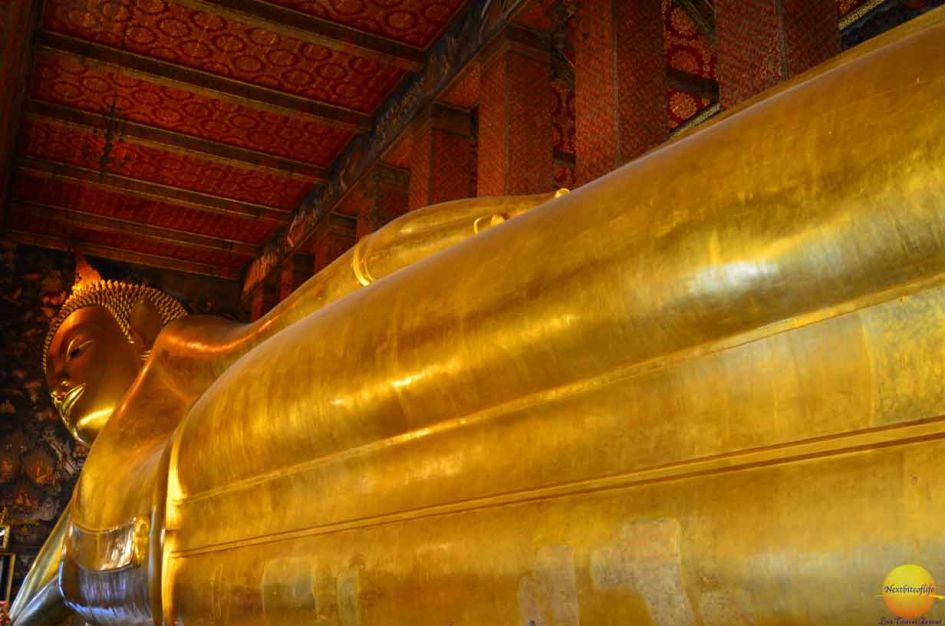 It is actually made of brick and then plastered over. It is finished in a highly polished gold plate. I noticed a lot of the other Buddhas were also gold-plated, save for a few that had reverted back to the patina.. 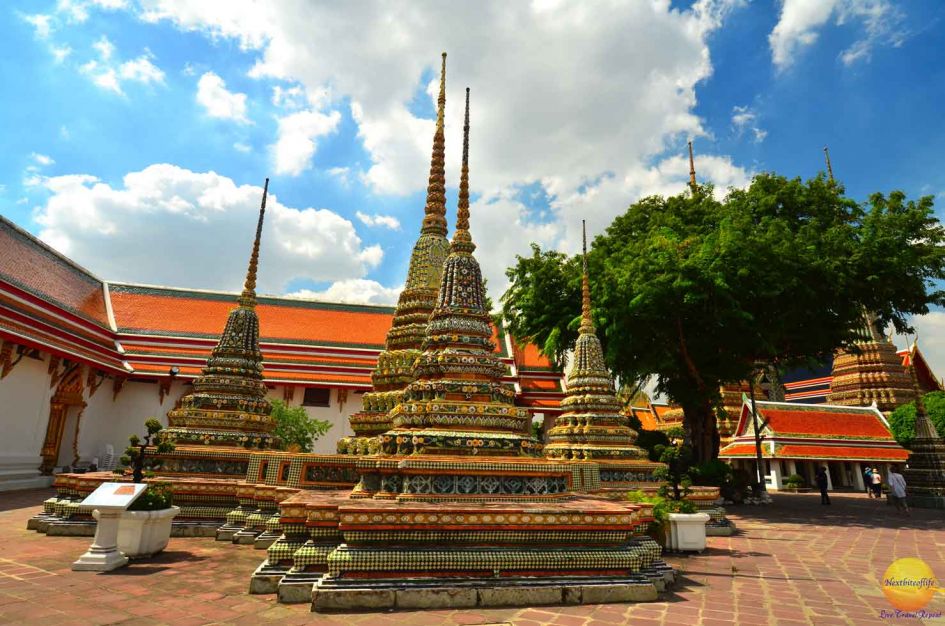 Wat Pho Bangkok exterior: I know one of this towers is named Rama I and another Rama III. I was trying to eavesdrop on a guide’s tour.

If you want a massage at the Wat Pho temple, your best bet is to make an appointment as soon as you enter, go check out the site and then go back to get your massage. You might be in for a rude awakening if you wait too late. We did not get massages there so l can’t tell you if they were better than in other places.

It is important to remember that a temple is a place of worship, and therefore you should dress accordingly. For both men and women, it is preferred that you have clothing that covers your knees. For women, this would mean a longer skirt, capris or long pants. Your shoulders should be covered, therefore no tank tops for either sex. Some temples will deny you entry. 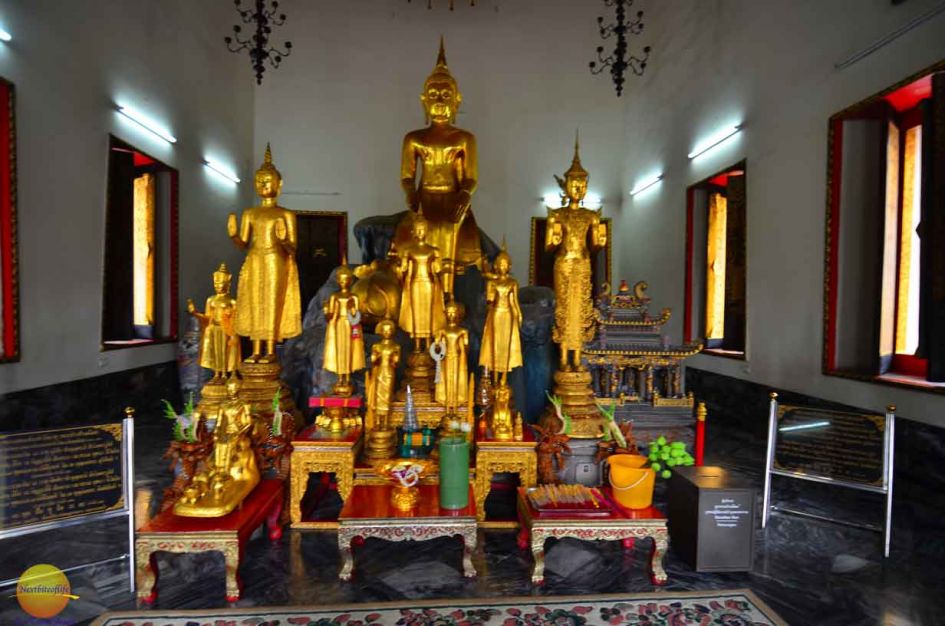 Wat Pho Temple is a must visit in Bangkok. Shall we dance? Love these different sized Buddhas at the Wat Pho Bangkok temple. 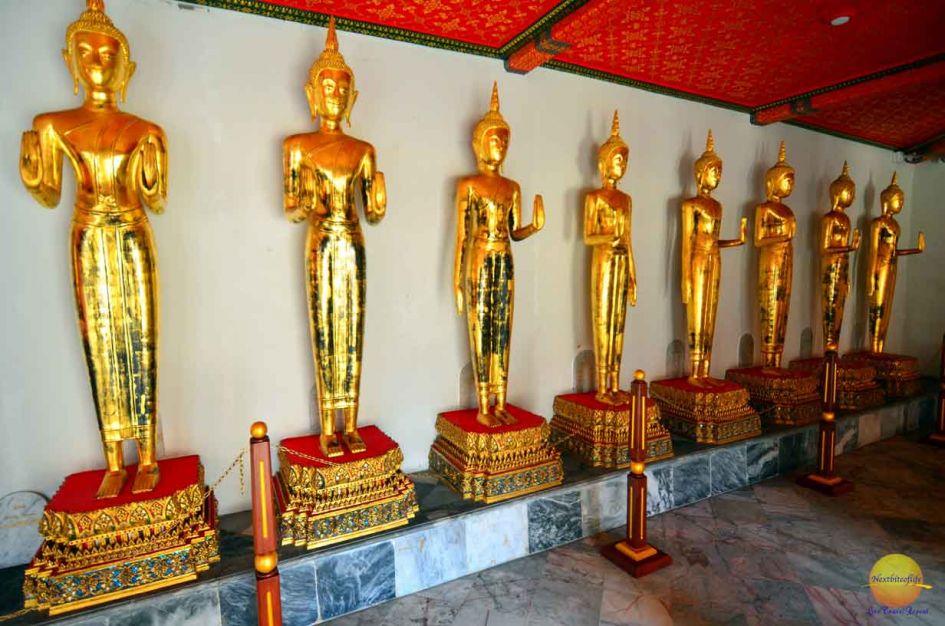 Just some of the many, many Buddhas that we saw at Wat Pho Thailand

Another thing Wat Pho Temple is famous for is the school of massage that is housed in the compound. People com from all over the world to experience the massage which is given by students. The lines are very long..always. There is also a school of medicine. It makes sense in a way, the whole place to be all about healing the mind and body.

For your free quote on travel insurance, Click Here 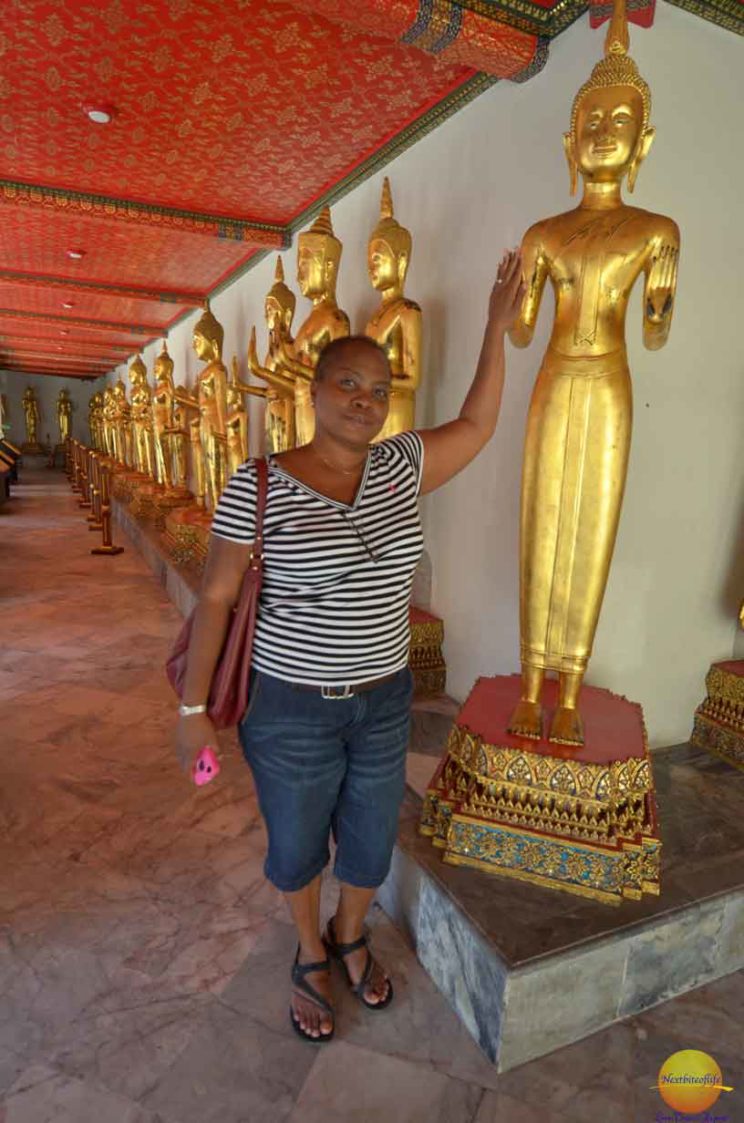 Me at Wat Pho temple Bangkok: I loved all the gold tones everywhere and l think Wat Pho is a must visit in Bangkok.

Temple of the reclining buddha : exterior 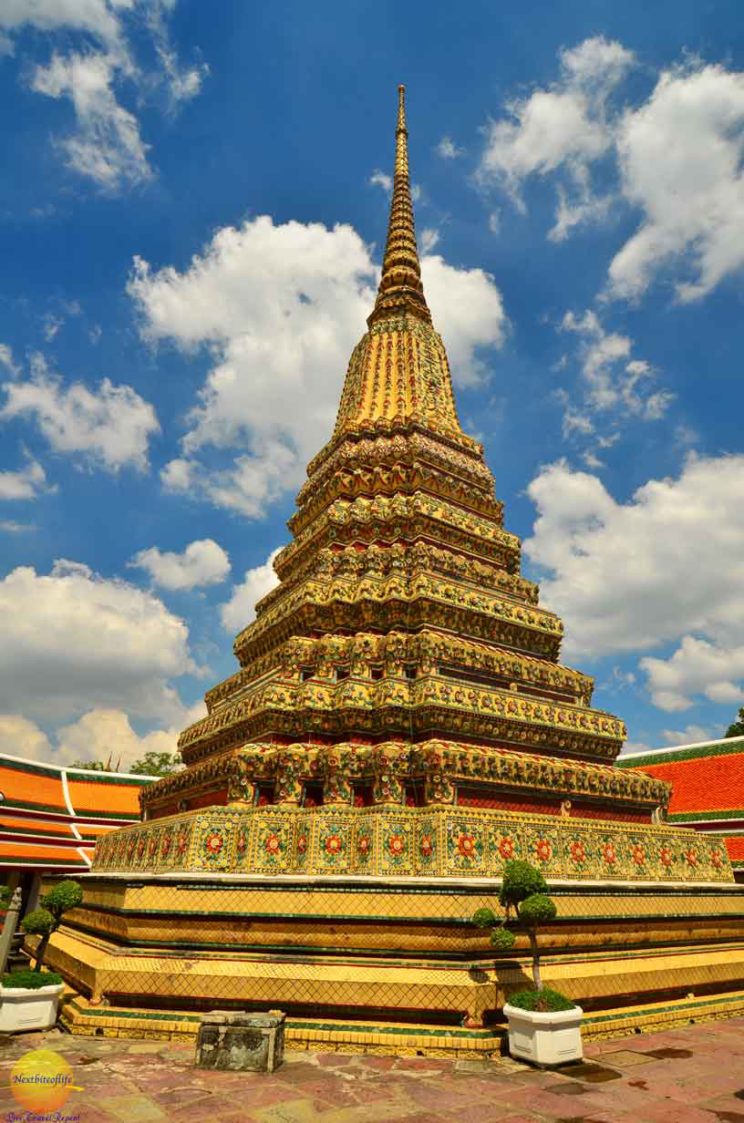 This one was my favorite tower at the temple Wat Pho.

How long to spend at Wat Pho Temple?:

In my opinion, you need at least 3 hours or more to fully enjoy Wat Pho, definitely longer if you have a guide, especially because it is always crowded. The Wat Pho entrance fee is a reasonable 100 Baht which is about $2.50 with the exchange rate.  If you plan on a massage, then you need to add time onto that. 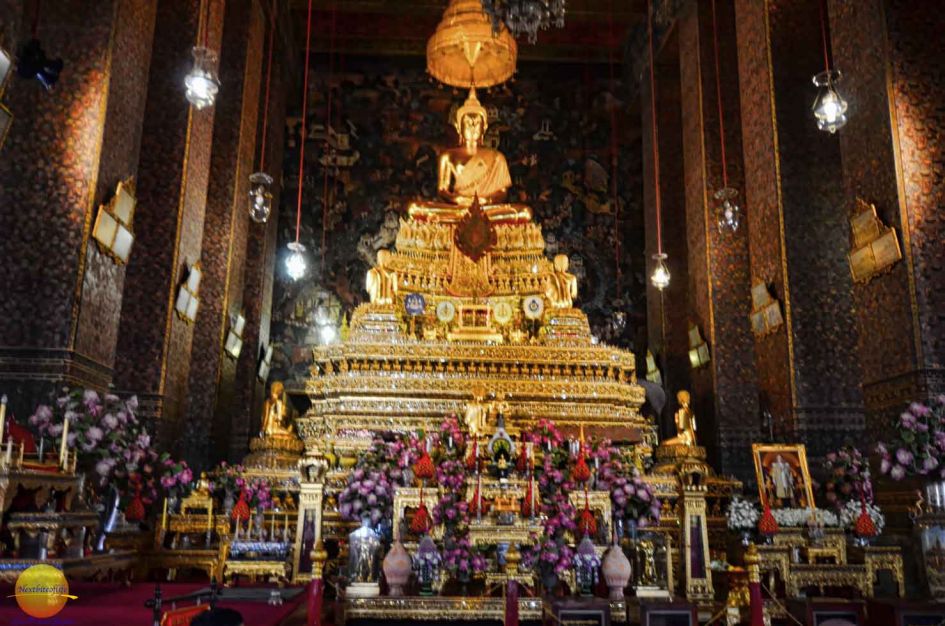 Amazingly huge Buddha all in gold and adorned with flowers was a thing to behold at the Wat Pho temple in beautiful Bangkok. 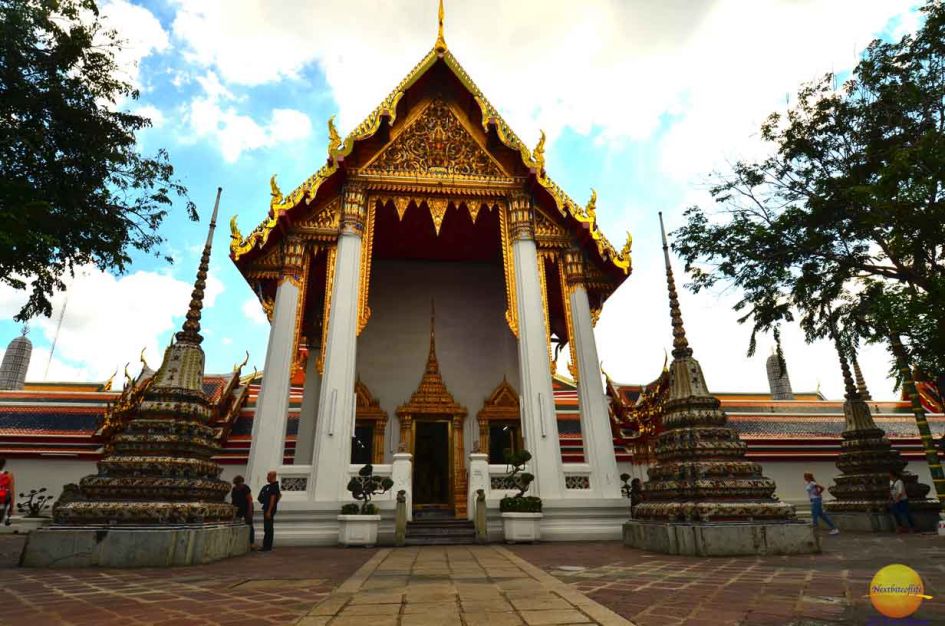 So many lovely chapels inside Wat Pho Temple

We absolutely enjoyed our visit to the temple of Wat Pho. It is in my book a must see if you make it to Bangkok. The grounds are really historical and very nice. The Buddhas are lovingly taken care of. I couldn’t help thinking of the movie “The King and I” as we walked around. Like any minute, Yul Brynner was going to pop out and Anna would be teaching the kids in one of the alcoves :-). Did you know Thailand used to be called Siam? This temple is considered one of the best temples in Bangkok, and rightfully so. 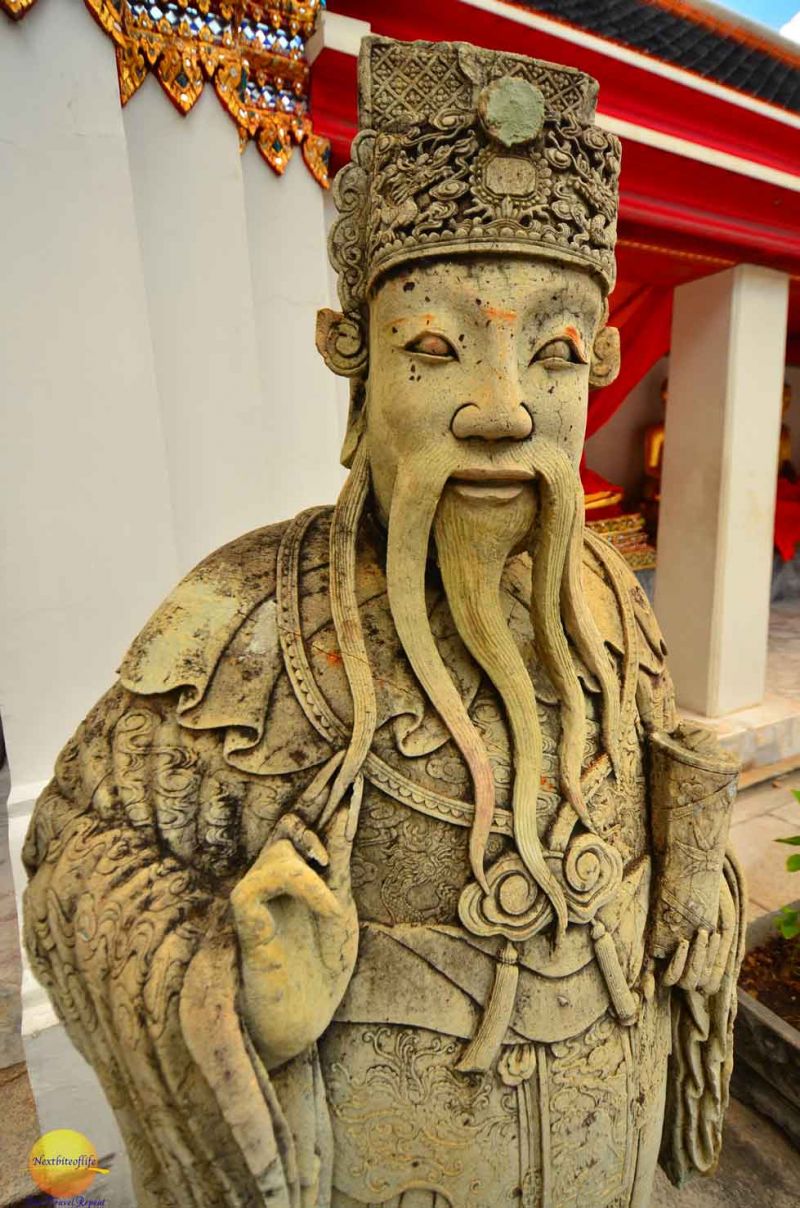 I loved checking out all the fierce looking guards of the chapels at Wat Pho.. 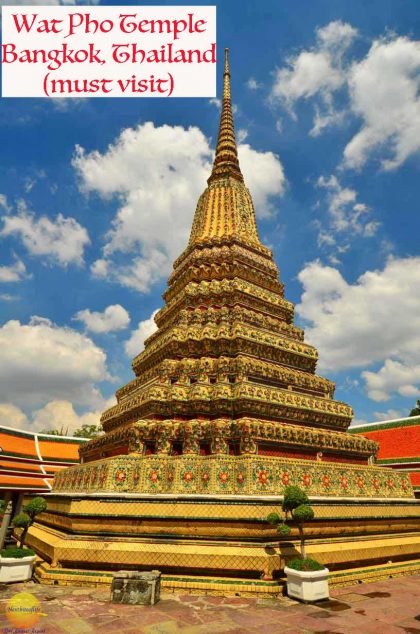 Have you been to Bangkok? If yes, did you visit Wat Pho temple? If not..would you care to visit this amazing temple?