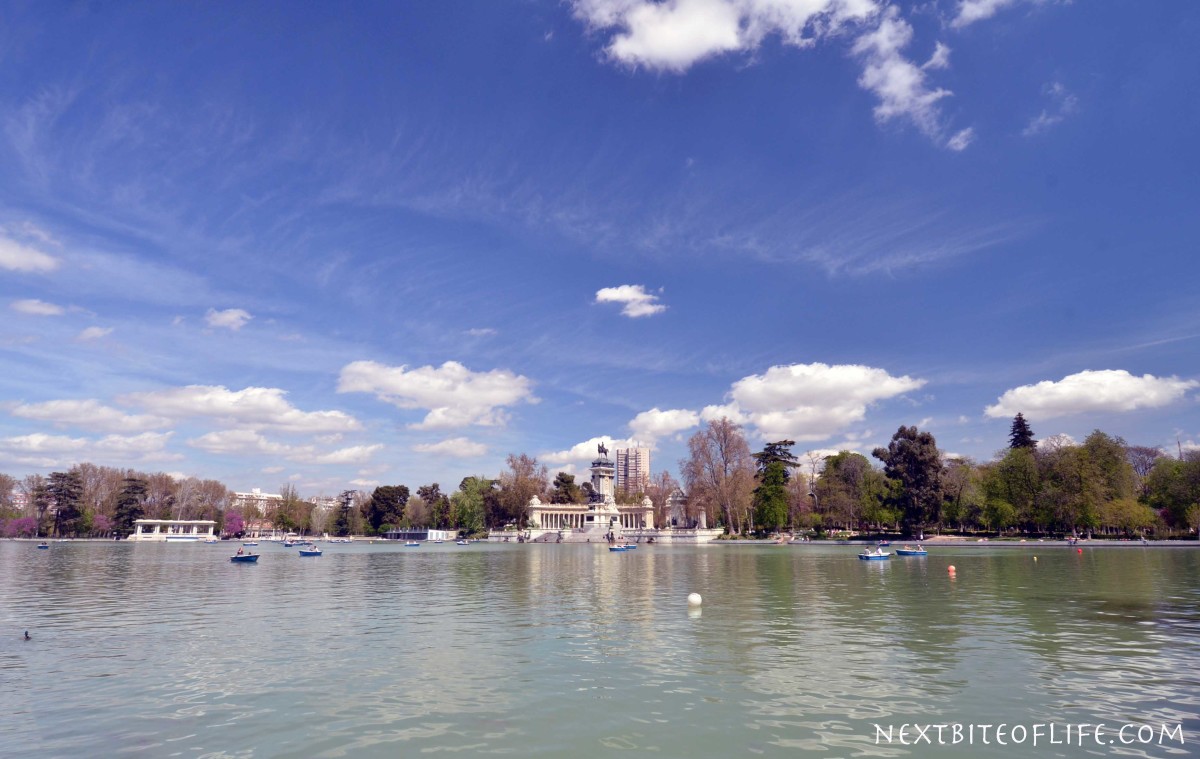 Retiro Pond with the monument to King Alfonso in the rear.

The El Retiro Park is one of the biggest parks in Madrid. This Buen Retiro Park in Madrid is approximately 350 acres and is located close to the city center. We decided to visit the park after passing it on our way to the Prado museum which is less than a ten minute walk from the park. The Atocha train station is also close by the park and we were staying in the neighbourhood.

I have previously touched on it in a previous post. I can say without a doubt that it is one of my favourite parks in the world. The colours seem to be exaggerated and the wide open spaces made me want to burst out singing like Maria in “The sound of music”. The place makes you feel good to be alive. Make time to check it out if and when you visit Madrid. 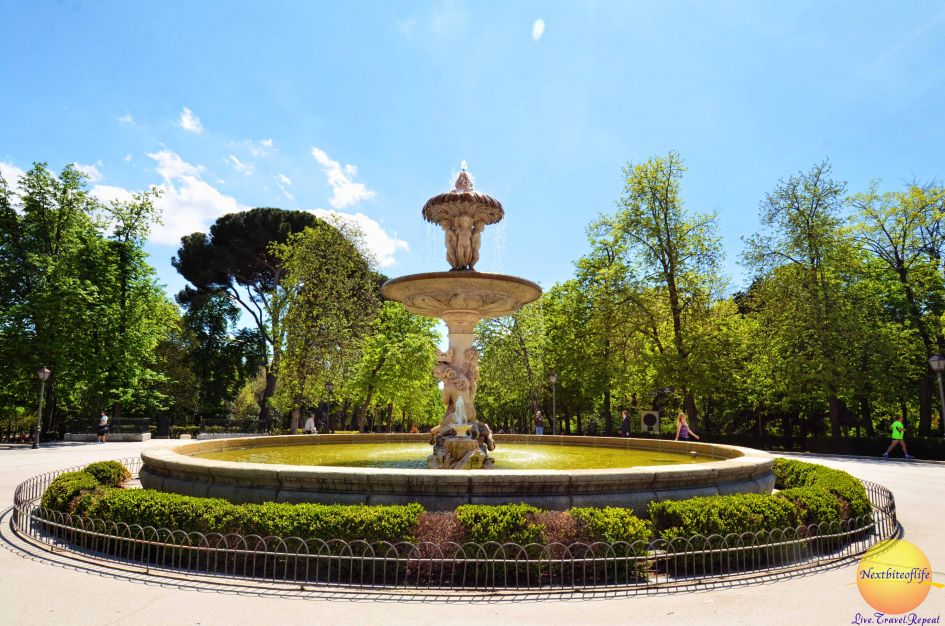 One of the many beautiful fountains in the El Retiro. One of the top things to do in Madrid

The Spanish name of El Retiro is “Parque del Buen Retiro” which translates to Park of the Pleasant Retreat. True dat! :-). The El Retiro park used to belong to the Spanish Monarch. It became a public park in the late 19th century. You could easily spend a whole day here, and l advise you to do just that if you happen to be in Madrid. The origin of the park dates back to the time of Queen Isabella. The San Jeronimo el Real Church had been moved from it’s previous and unsuitable location to it’s present site, which is just behind the Prado museum. The royal family had the park built as a retreat. It was later expanded under the rule of King Phillip II. 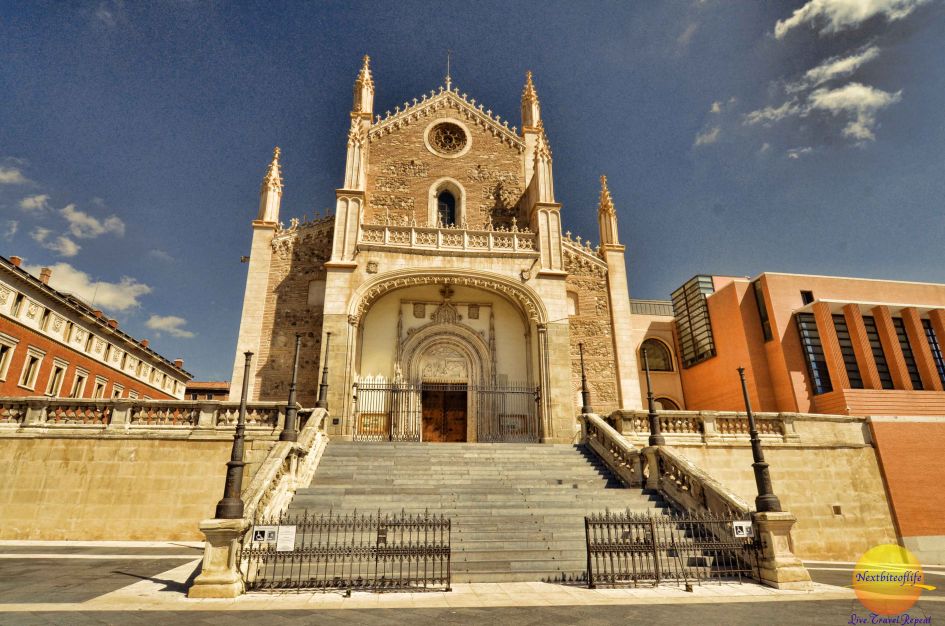 The San Jeronimo el Real Church. The last remaining structure of the Hieronymite monastery formerly inside the royal palace of Buen Retiro.

In the 1630’s, the Count-Duke of Olivares commissioned the designer Cosmo Lotti to redesign the layout of the El Retiro using water as the main theme and focus of the garden. Lotti’s past work included the Boboli Gardens in Italy. The El Retiro was described then as “The world art wonder of the time” Some of the new additions were the Estanque del Retiro (Retiro Pond)  – Mock naval battles and aquatic displays. It also had the great canal, the narrow channel, bellflower pond and chapels. The El Retiro became the center of the House of Habsburg court life. Plays were often performed in the park for the royal family and the court. How magnificent it must have been in those days! 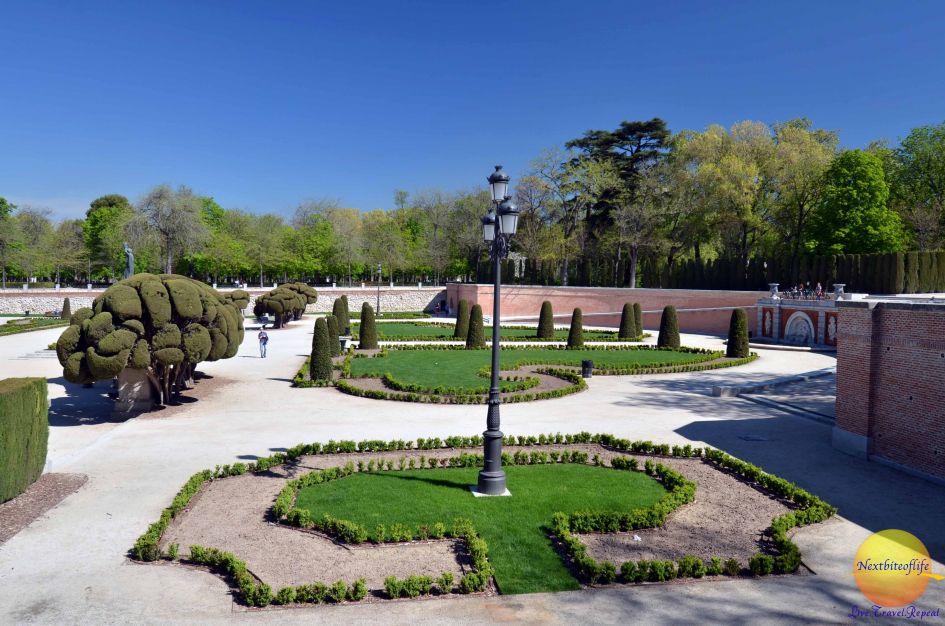 Wide paths in these intricately designed gardens at the Retiro Park Madrid.

Protect your trip with the best Travel Insurance 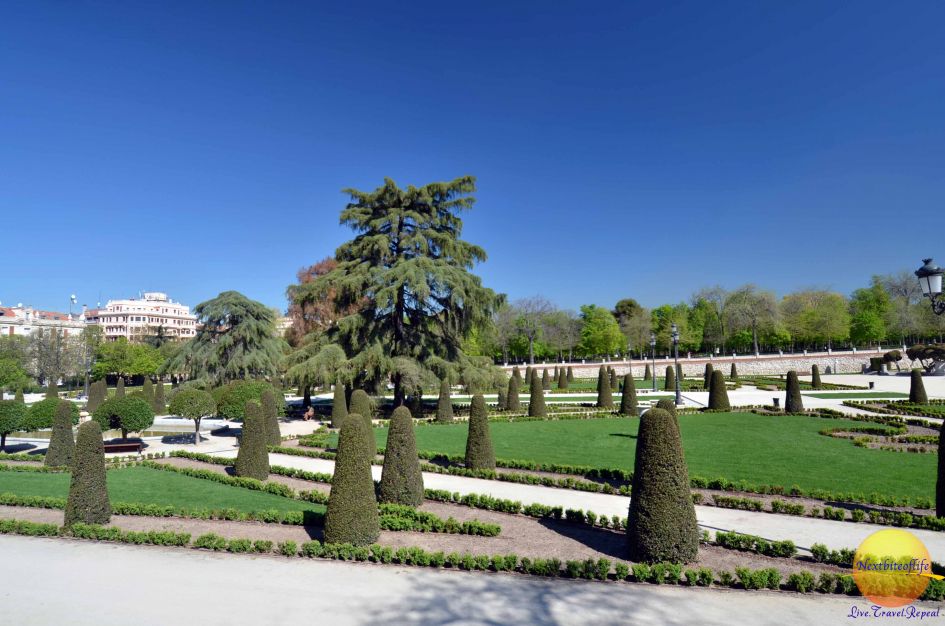 El buen retiro park – Imagine the view from the top floor of those flats.

The gardens eventually passed on to public ownership after the overthrow of Queen Isabella. It has become an open air sculpture museum as commemorative monuments, statues and fountains have been added to the El Retiro, including the monument to King Alfonso XII of Spain by Jose Grases Riera. Among the features of the park are:

This is a wicked big artificial pond. It is so calming to look at. There are places to sit and just chill, or you can rent a canoe as most people do, and paddle around the pond. There are also several cafes around the pond where you can sit and have a beer or ice cream and people watch. You can see the monument of King Alfonso on his horse in the rear of the picture in the semi circle. 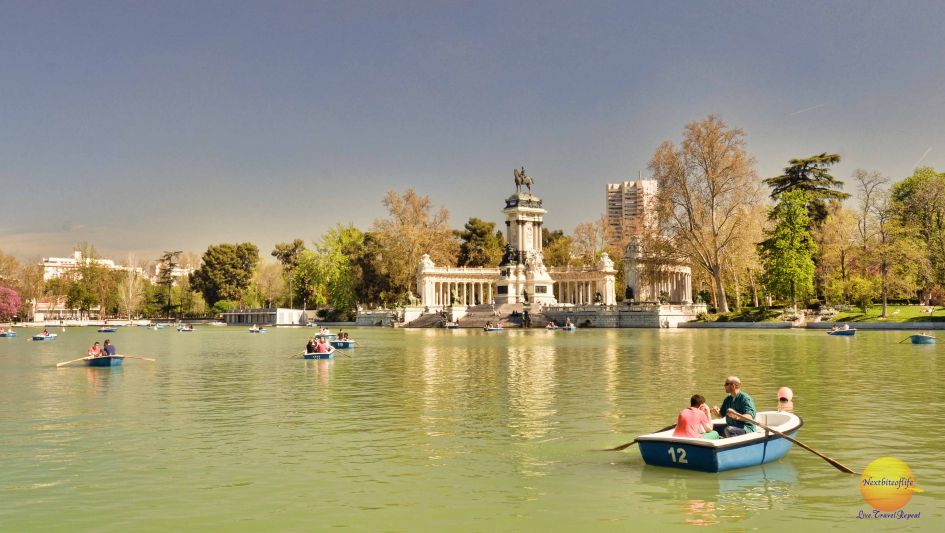 What to do in Madrid? Rent a rowboat and paddle your way around the pond at el retiro. 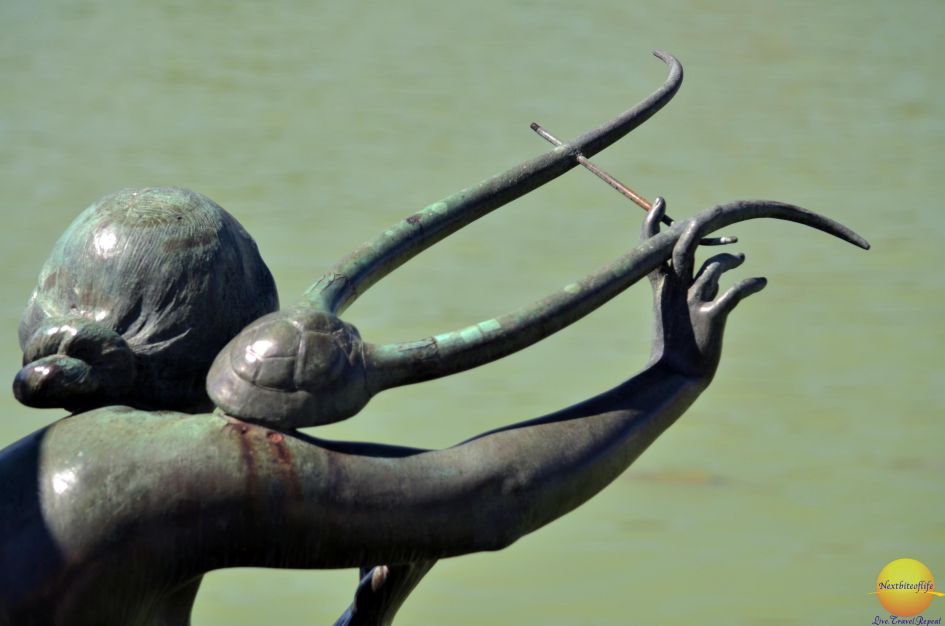 What to see in Madrid? include the el retiro park in your Madrid itinierary. So many beautiful water statues to gawk at at el retiro 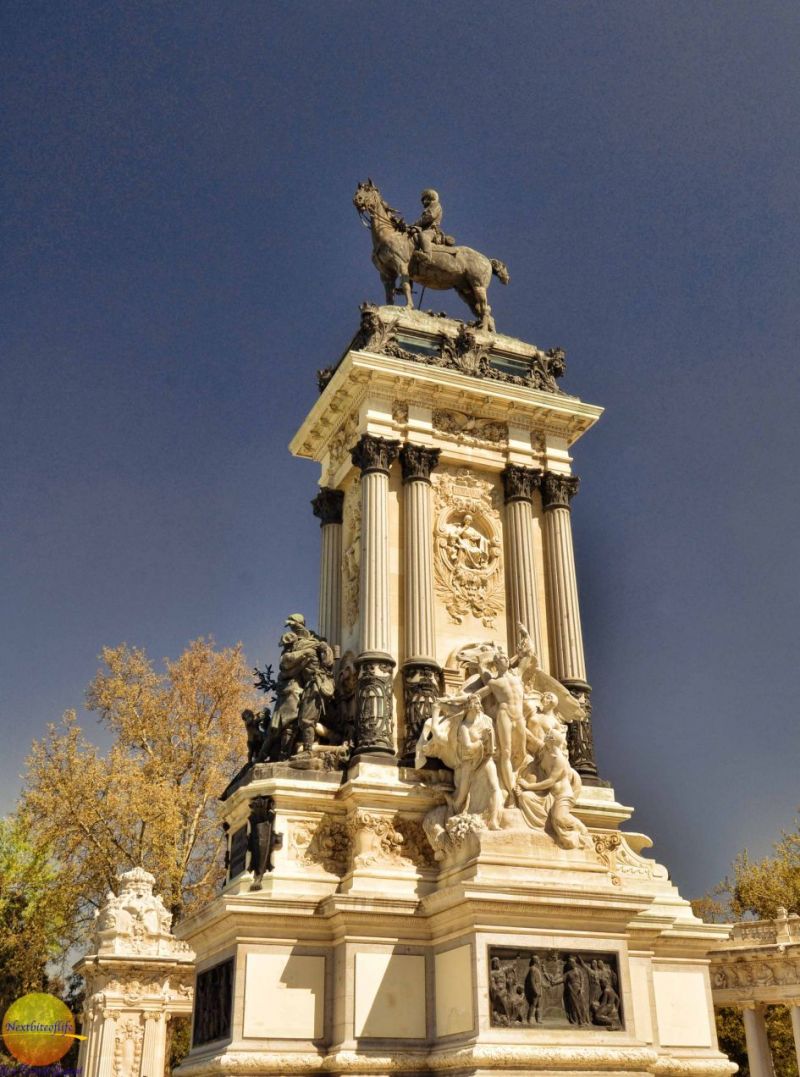 King Alfonso XII at the parque del retiro Madrid, definitely on of the top highlights of any Madrid visit.

It is now an art gallery and has some excellent work by Spanish painters and artists. We had a great time checking out the art. It would have been nice to be able to understand the Spanish, but it is still a feast for the eyes nonetheless. There are some really modern pieces as well, the kind that makes you scratch your head and wonder what the artist was trying to convey. I much prefer my impressionists :-). 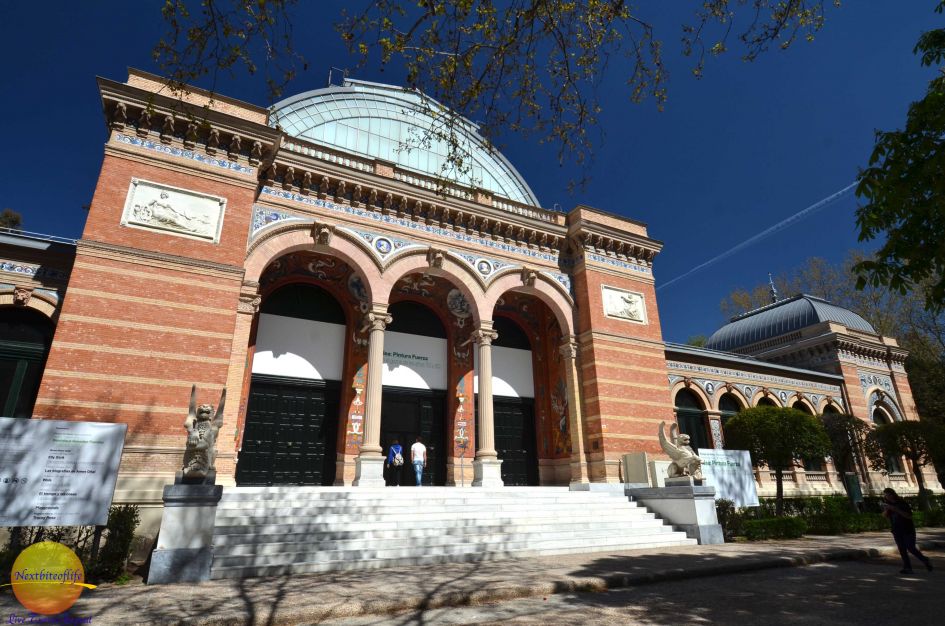 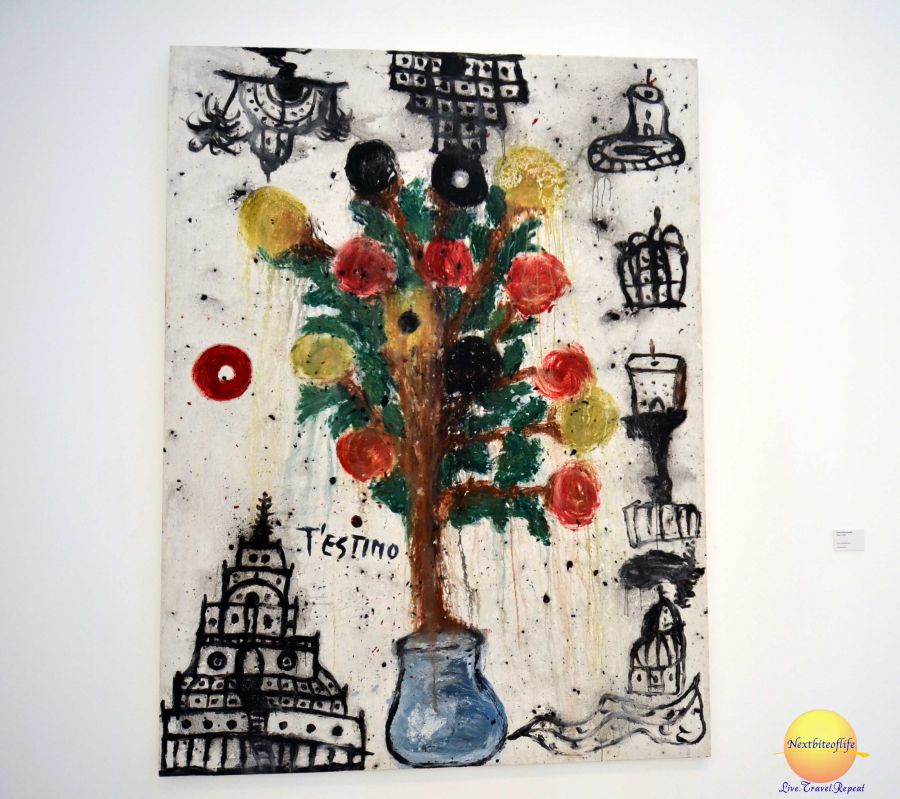 Some of the art pieces inside the gallery. One could spend several hours at el buen parque de retiro and not get bored. 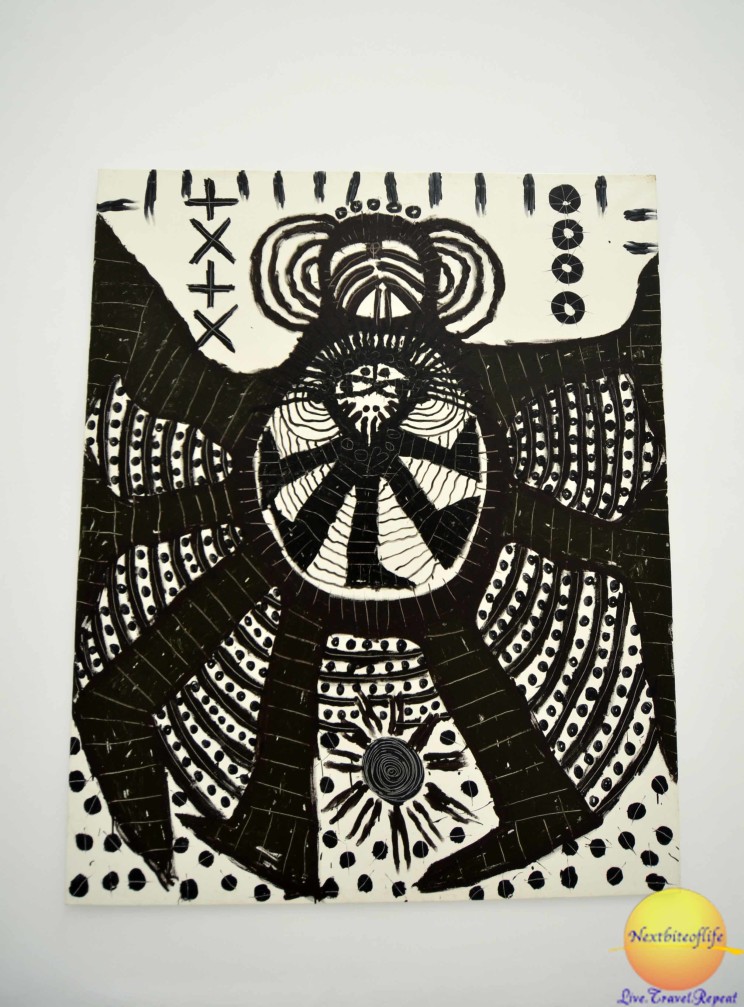 I love this one. It sort of reminds me of tribal cloth. 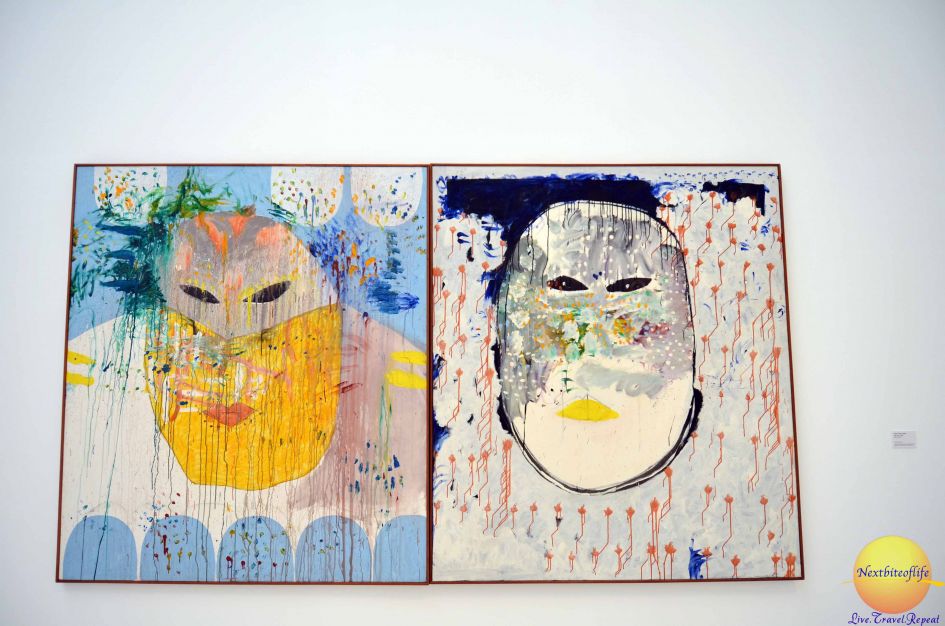 Visiting the gallery is a great way to discover up and coming Spanish artists. Who is the next Picasso?

Known as the Crystal Palace in English. This by far was my favourite building in the park. It is a glass pavillion that was designed by the architect Ricardo Velasquez Bosco, the same man who designed the Palacio de la Velasquez. It’s design was inspired by the Crystal Palace in London. This palace was built in 1887 for the Phillippine Islands Exhibitions, and was first used to display flower species that were native to the archipelago.

Nowadays, it is used as an art gallery, even though when we visited, there was none. They had rocking chairs in the various rooms, and books too. I can imagine it would be extremely hot during the day with all the glass, but when the sun is setting and reflecting off the glass, it really is a thing of beauty. Just outside it’s doors is another artificial pond. I absolutely loved this place. 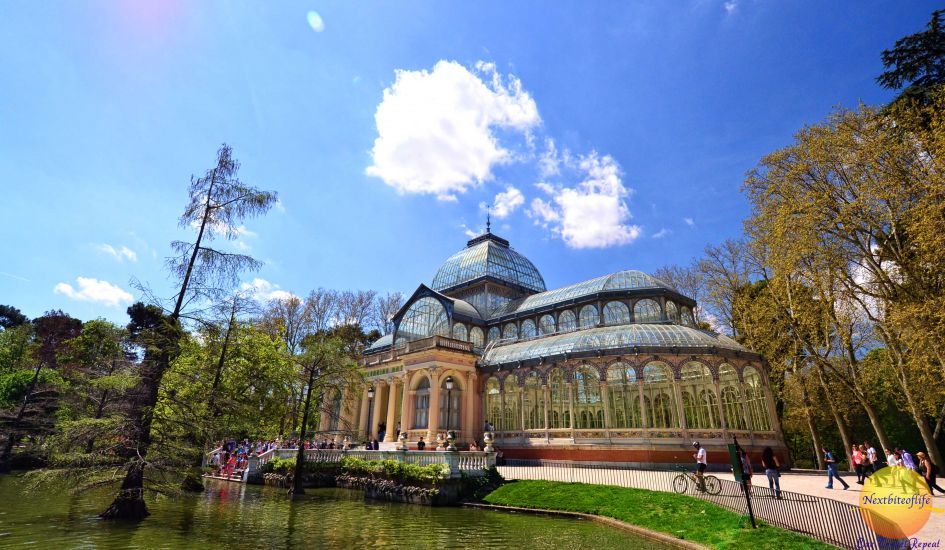 The crystal palace just glistens in the sun. Amazing and l think one of the highlights of Madrid.

Related Reading: How to spend a day in Madrid. 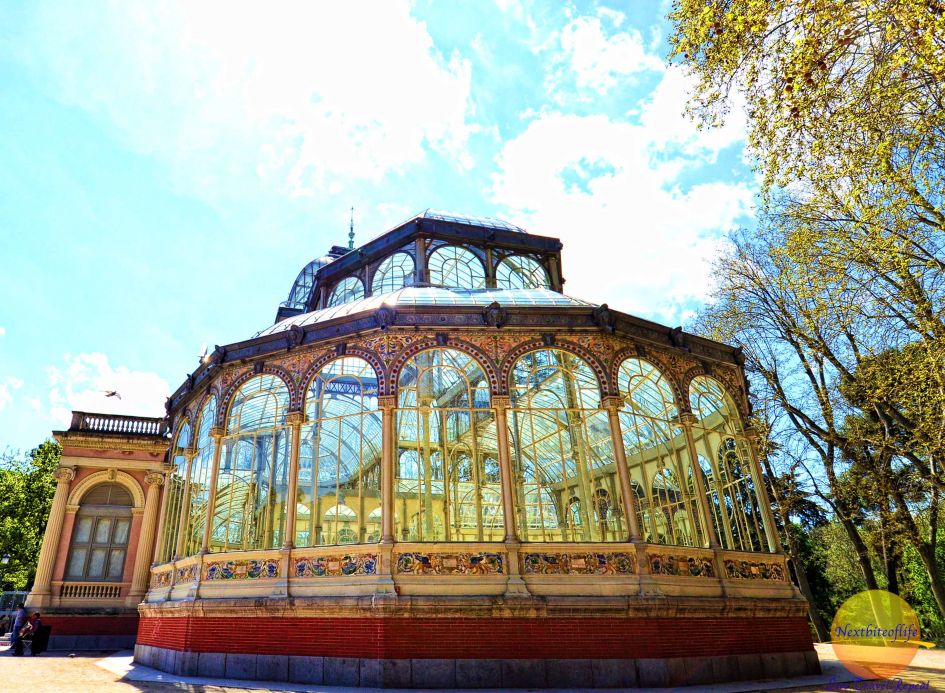 Is this gorgeous or what? Does it remind you of the Sound of Music “I am 16” scene? 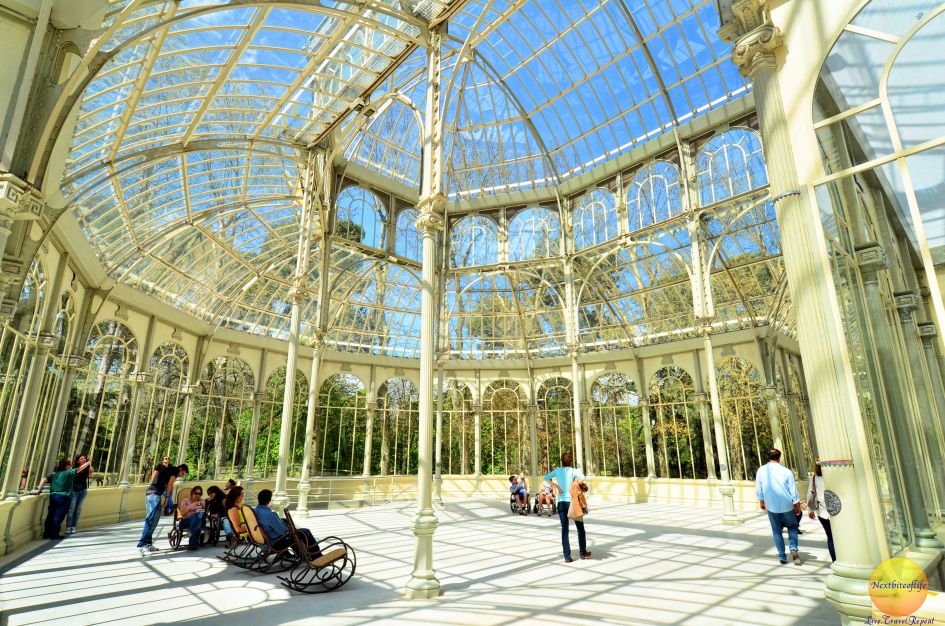 Inside the Crystal Palace at El Retiro Park: They had rocking chairs placed throughout inside the crystal palace..only people didn’t want to move :-) 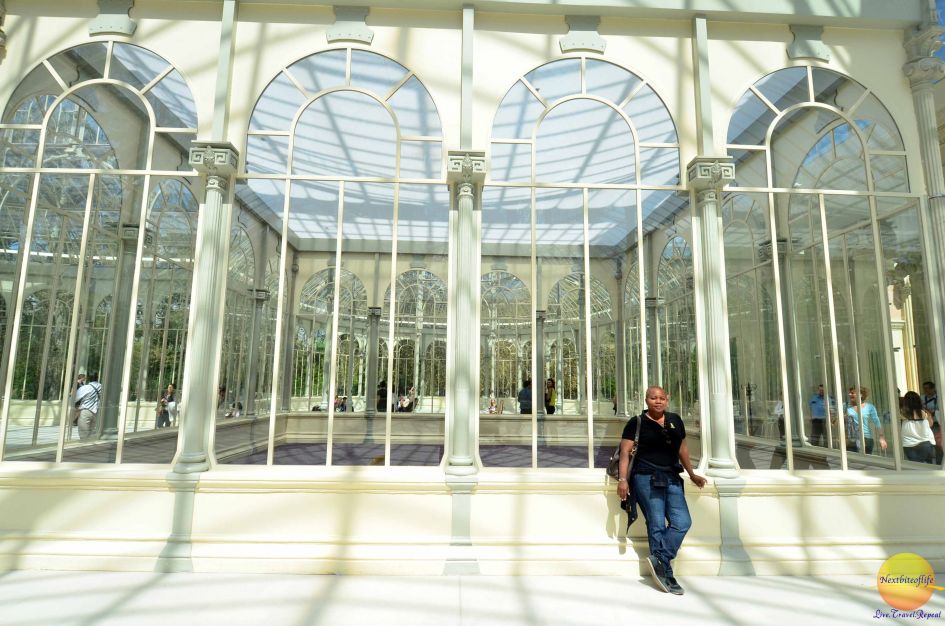 Retiro Park Crystal palace in Madrid .There were like 6 or so rooms built around the main one..

CLICK HERE TO FIND THE BEST HOTELS AND PRICES IN MADRID 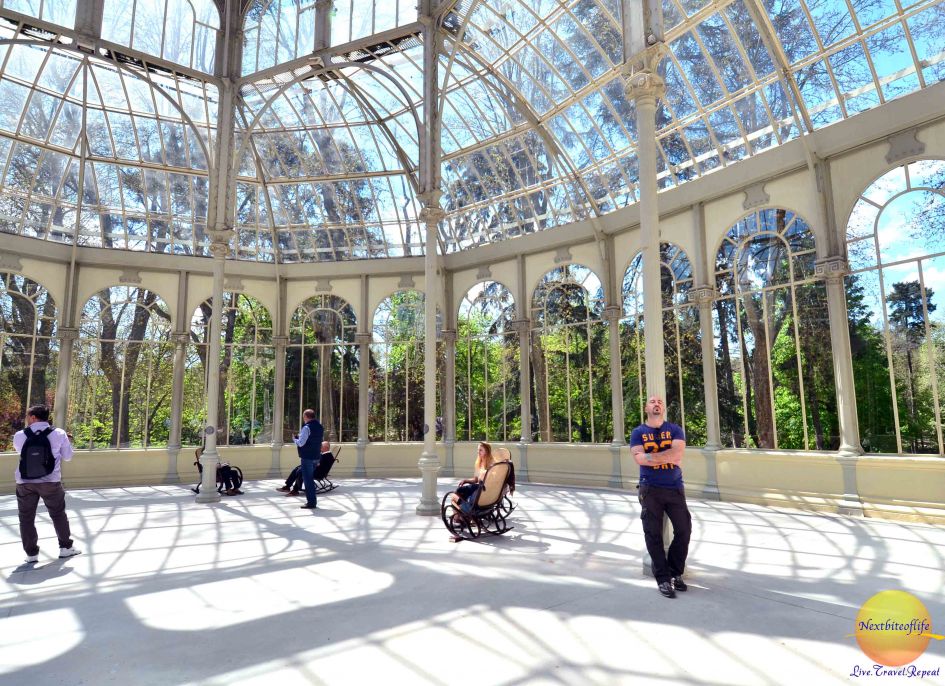 This was formerly known as Forest of the Departed (Bosque de los Ausentes) – A memorial monument to commemorate the victim of the 2004 Madrid attacks. On March 11, 2004, there were almost coordinated bombings of the Madrid commuter train system, including one at the Atocha train station that killed 191 people and wounded 1800 more. It was the deadliest terrorist attack in Spanish history. I can’t seem to find my picture of it, so l have included a stock photo. 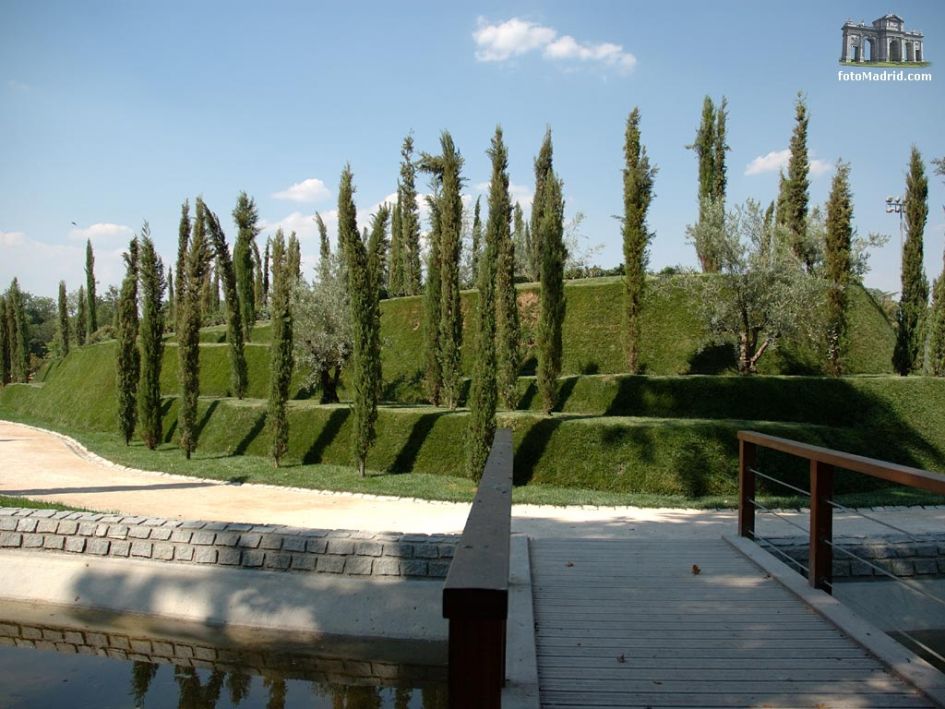 From May to October, on Sundays, the Madrid Symphony gives free concerts in the park. We missed out on this. There is also an outdoor exercise area with equipment. We saw people of all ages working out, which is so cool. We also noticed informal groups of exercisers close to the Retiro Pond. We saw plenty of people having picnics or just catching some sun as it was a nice day.

As you can imagine, there were plenty of street performers in and around the El Retiro. We sat and had lunch just outside the Palacio de la Velasquez and got to listen to an old man and his violin who had the most amazing voice. He didn’t even have to go around to ask for money, we all went to him :-). A lot of the ponds had ducks so plenty of kids feeding them. All in all, it is a fantastic way to spend a day in this beautiful city. Sometimes it’s just nice to experience how the everyday people go about  living their life. Madrid does not have the frenetic pace of Barcelona, and l found it very refreshing. Variety is the spice of life, after all. I found myself imagining what it would be like to live in one of those buildings close to the park. I bet l would check it out daily. It is huge enough that one would never get bored, especially since there are many entrances to the park, so your scenery would change often. 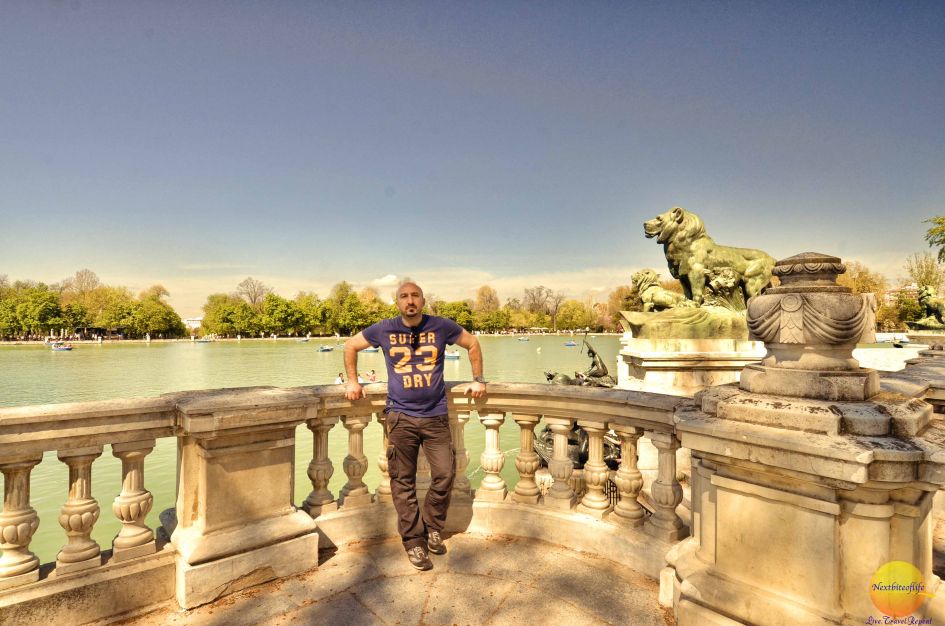 One of the many wonderful views in the buen Retiro park. There are tourists and locals hanging out at the parque and it’s a wonderful way to see how Madrillenos live. 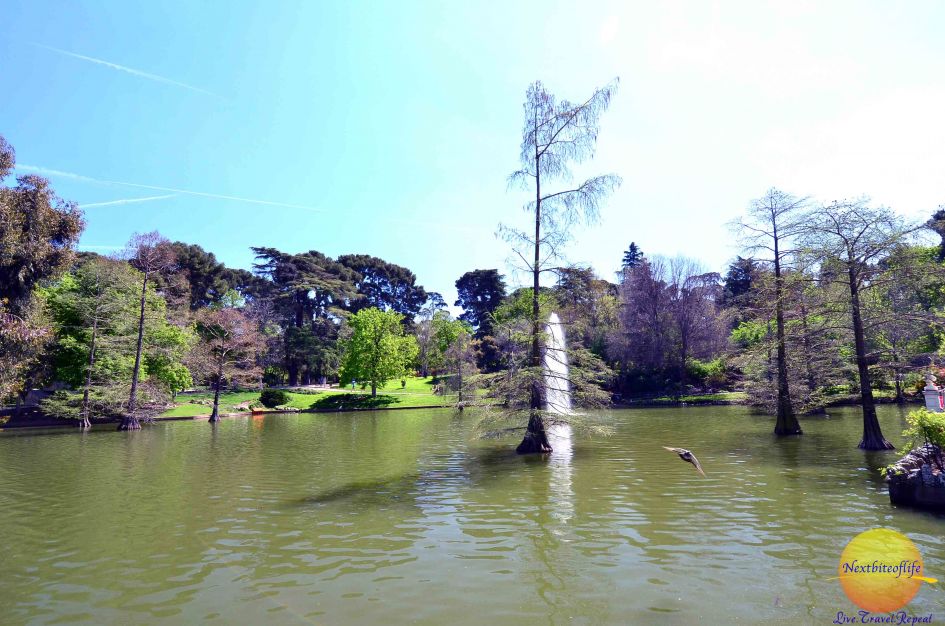 So many beautiful spaces within the el retiro park.

There were also a lot of scam artists around the perimeter of the park, so just be aware of that, and just keep on moving. The most common one we say was the “petition scam”. You are asked to donate money to some charity or sign a petition. More than likely, the minute you reach for your wallet, the accomplice swoops in and steals your wallet. According to our hostess, the El Retiro is also a famous gathering spot for Spanish Botellon. This is a nighttime activity where people meet up and drink alcohol, mostly in big bottles (botellon). Most people do this as an economical way to drink with friends before going out to bars and clubs. It is not legal in the park, but the cops usually turn a blind eye. I wonder if that could happen in America? We always have such a tendency to overindulge and act silly, ruining it for everyone else. I find in Spain, most people are responsible drinkers..I don’t think l have ever seen a cop breaking up a drunken fight, or maybe l’m just not up late enough :-). 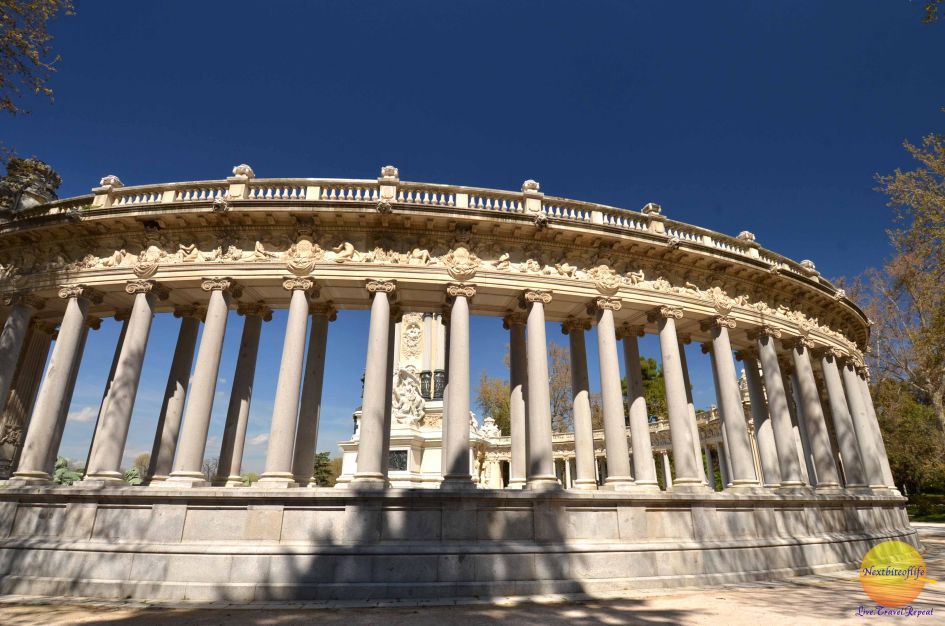 The el retiro park is simply stunning. So many people jogging, walking, working out and just enjoying the big park.

FIND THE BEST HOTELS IN MADRID FOR YOUR DATES HERE 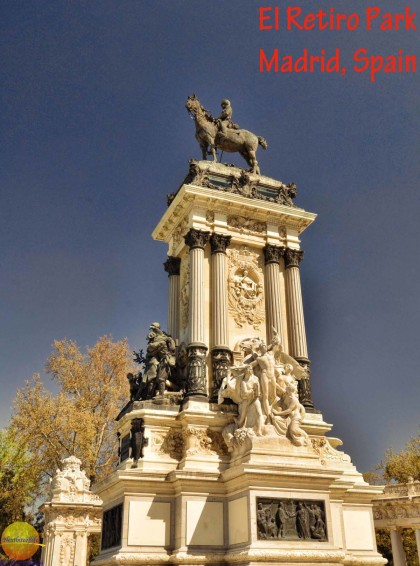 King Alfonso statue in the park. 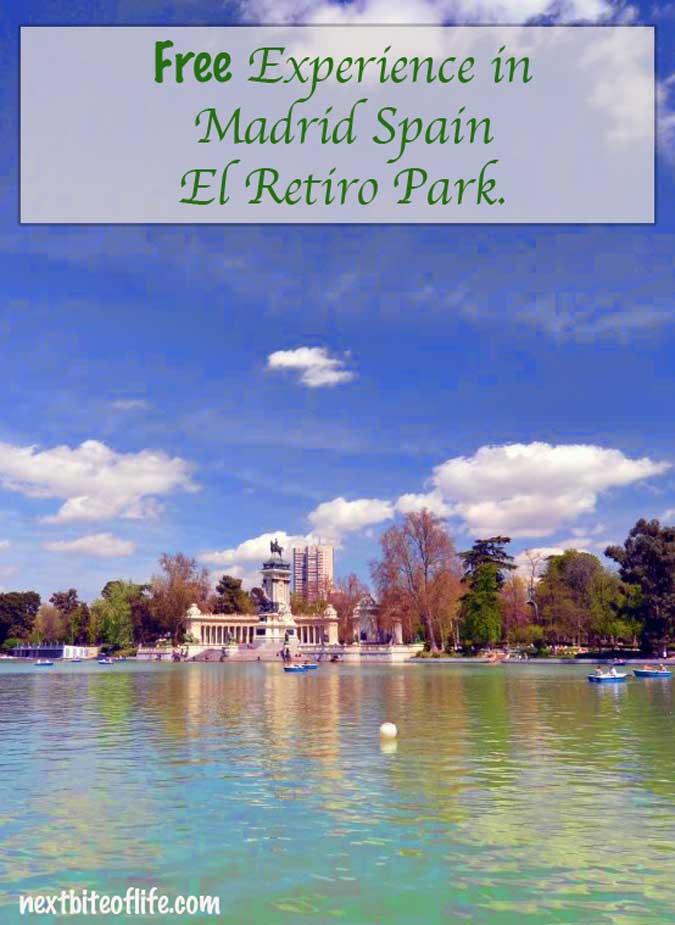 Have you ever been to Madrid? If yes, did you visit the El Retiro de Madrid park? If not, is it a place that you would visit, or do you find it boring and for old folks like me only ;-).