Amsterdam Is Ordinary. (Why I think it’s just…Okay) 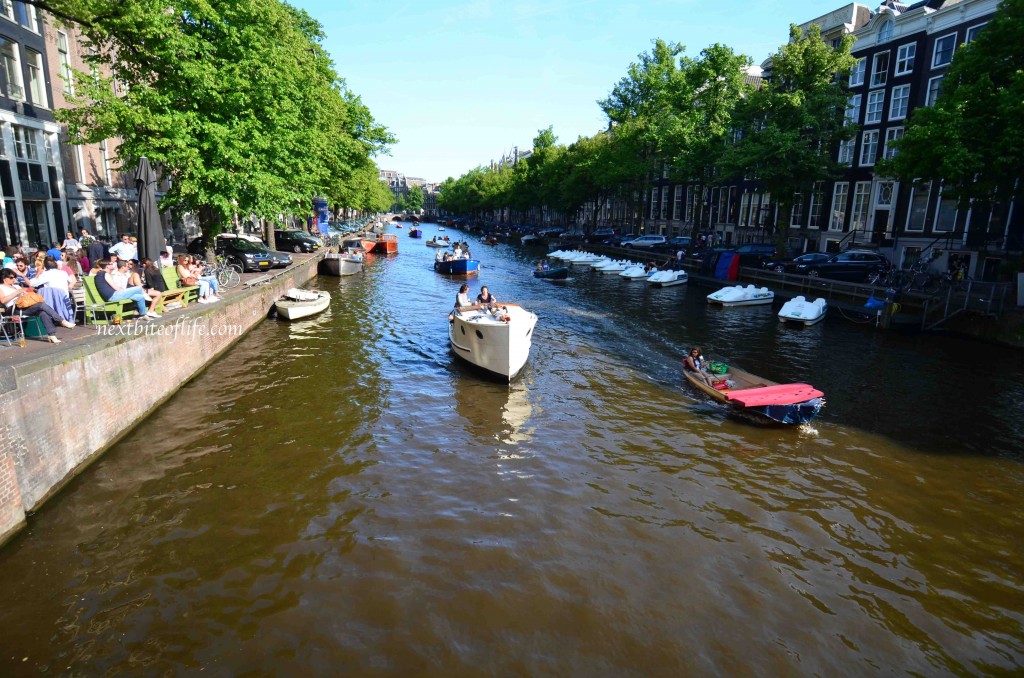 A canal view of Amsterdam

Amsterdam is usually spoken of as a must see place. The canals! the art! the hip areas! the red light district! the ease of getting pot and hash! the museums! ..etc…etc. It’s on everyone’s list of “breathtaking”  places, you feel that you are definitely missing something if you don’t experience it in all its glory. It’s always on the best places before you die articles that l see.

Update: The i love Amsterdam sign in Museumplein is no more. The letters have been removed as the city cracks down on over tourism in the center. The sign moves every so often to different places to focus on other areas, so do a quick search and you can still take your selfies wherever it “pops” up. 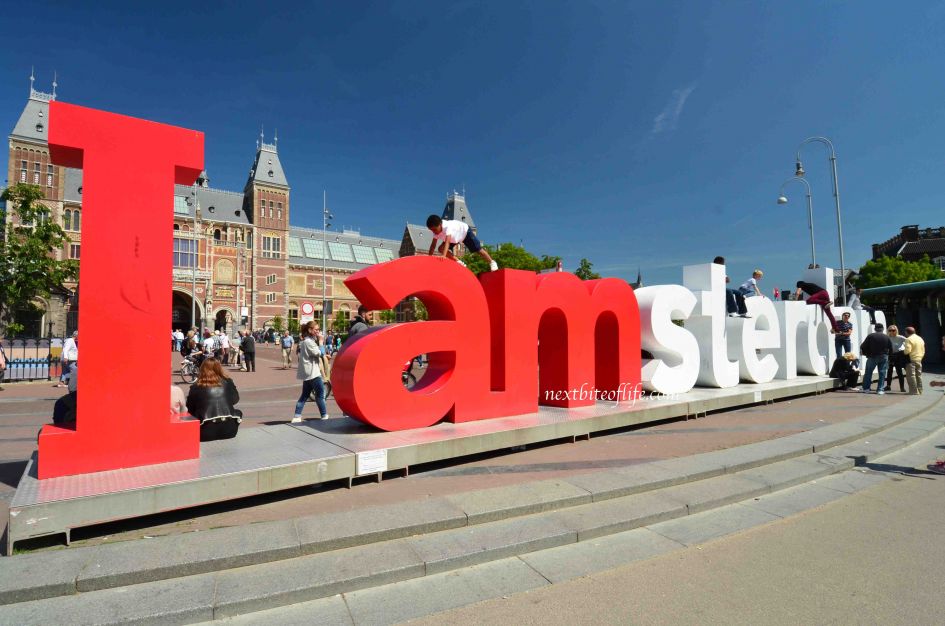 I Amsterdam..get it?? This iconic symbol of Amsterdam is gone. 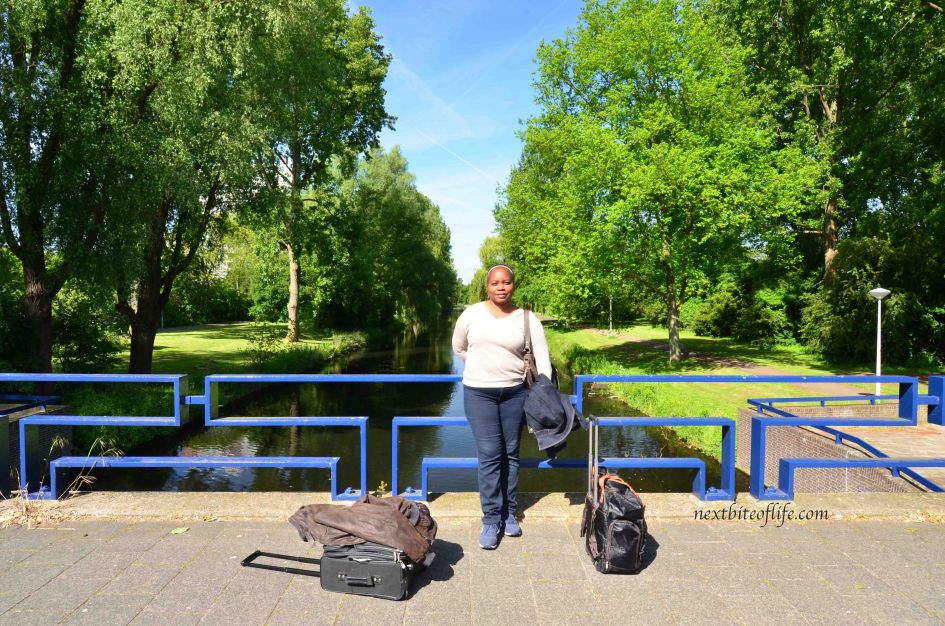 Amsterdam is ordinary – the canals are pretty for sure, but there are tons of places that have that!

Amsterdam is Ordinary: Why I think so 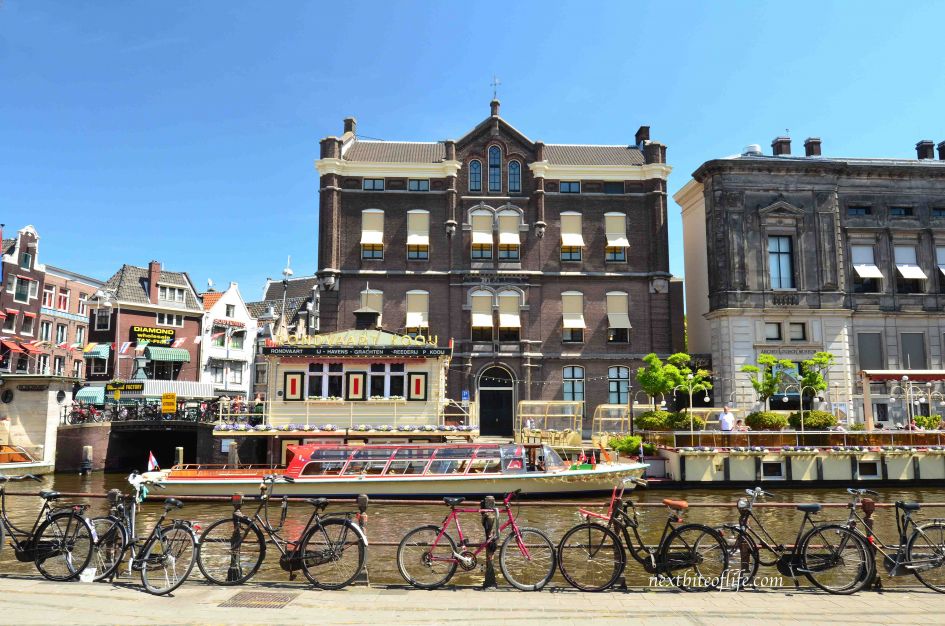 Amsterdam is ordinary, nice but totally over hyped!

Beauty of the Canals in Amsterdam:

I’m not sure if l am just jaded from all my travels, and l’m sure a lot of people would disagree with me, but l was actually meh about the whole place. I didn’t hate it, but l didn’t love it either.   I wanted to. I just couldn’t do it. I can’t quite put my finger on what it was either. It was just … okay..for me anyway .. sorry.. :-) .

We arrived on a pleasantly warm and sunny day. It was quite easy to make our way from the airport to where we stayed. A suburb that was just 10 minutes by train to the center, in a lovely AirBnB rental. There was a misunderstanding with the actual stop to get off, so we ended up having to walk an extra half a kilometer. The lovely hostess met us halfway, and we walked back to the flat together, where she familiarized us with the place. We quickly dropped off our bags and took off to explore the city.

The canals of Amsterdam, l must admit, are very nice. It’s easy to imagine yourself floating down them in a boat, sipping wine and eating cheese as we saw so many people doing. Maybe after seeing Venice and its lovely (but stinky :-) )canals, l wasn’t very impressed. I actually prefer the canals in Berlin. They are pretty, and there are countless numbers of them all winding through the city, but..they were just okay. Nothing to make me say “l am so glad l came here specifically for the canals”.

What to see in Amsterdam: Serene view of one of the many Amsterdam canals 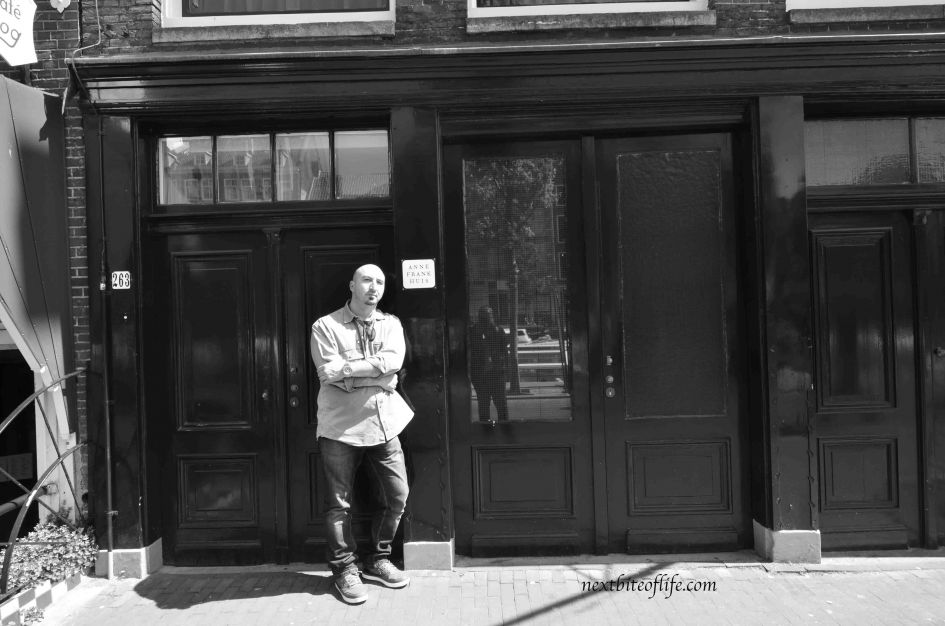 Places to go in Amsterdam: Outside the Anne Frank house. I hear the stairs are really hard on the knees, so if you have problems, you might want to check to make sure. 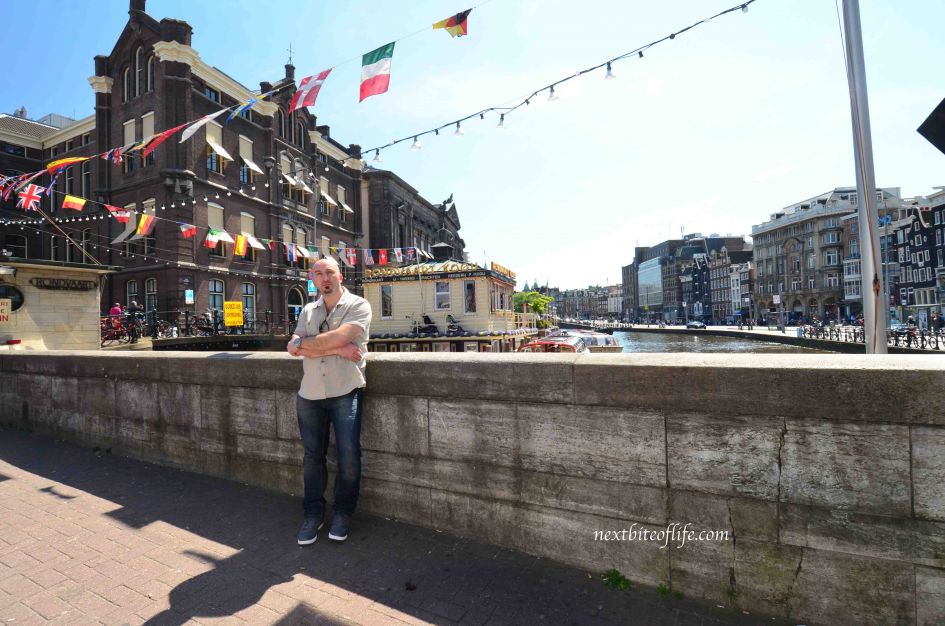 Sightseeing was my favourite part of Amsterdam. The canals and colourful buildings and seeing people riding bikes makes it pleasant, but not unique.

I had been looking forward to visiting the Anne Frank house. I wanted to see the place where this little girl found shelter from the Nazis. The line though, was insanely long. I simply refuse to wait in line for 2 hours for anything. We chose to take a picture of the outside and one next to her little stature and call it a day. Same for the Van Gogh museum. I am a huge fan of his work, but we had just seen a few of his masterpieces at the National Gallery in London for free, so there was really no urgency to go there. 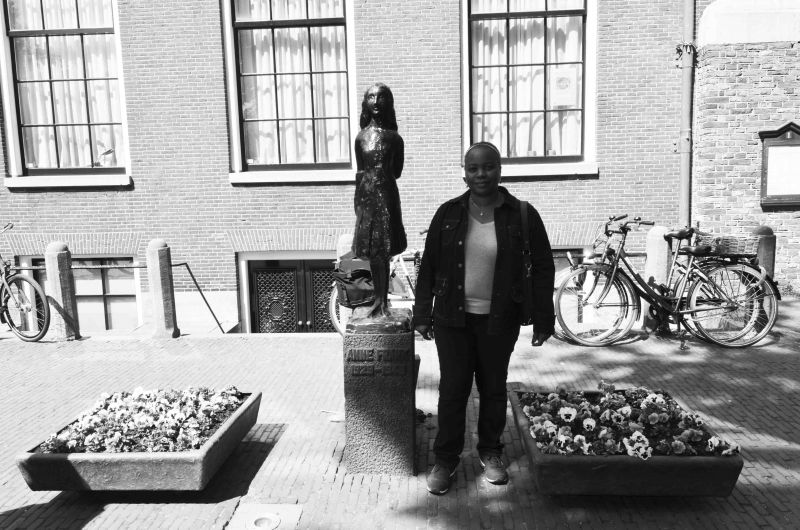 I don’t know about this one much, but l did see users running around in the parks as well as the bums that stand outside and watch as you eat. 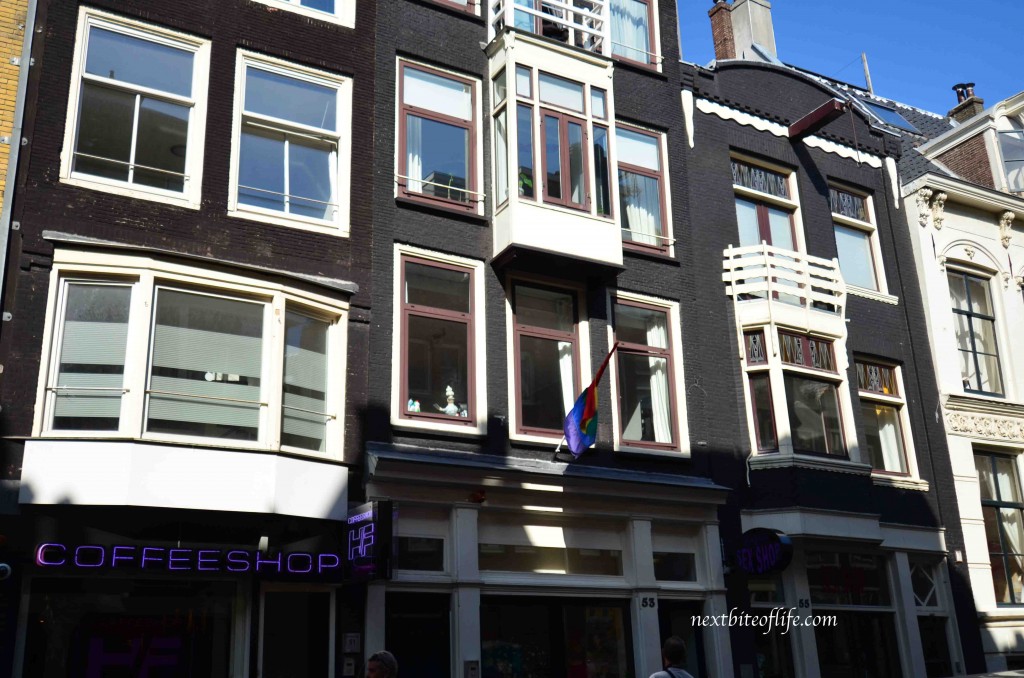 Nobody came out with coffee from there that l saw! Federico explained it to me… duh :-) 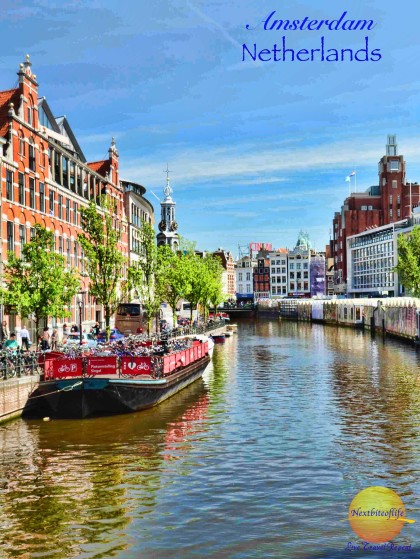 Lovely canal in the city of Amsterdam, one of many…but l still think Amsterdam is ordinary.

We did visit the Foam Photography museum. That was quite enjoyable. Since Federico is a photographer, he especially loved it.. We spent several hours roaming around and reading past issues of their magazine. It was definitely worth the €11 per person price of admission for us and l would recommend that.

Amsterdam is pricey: (What to eat in Amsterdam)

The one thing that struck us was how expensive Amsterdam is! A bottle of water (33cl) cost €2 at the convenience stores, while they were an average of €4-6 at the restaurants. Most of them had little signs that said “we do not serve tap water as a matter of hygiene” or something similar.  Really?? The tap water is completely drinkable mind you. We survived just fine on it . It was cheaper to drink beer than water, but how much beer can one person drink?… don’t answer that!! :o ) . 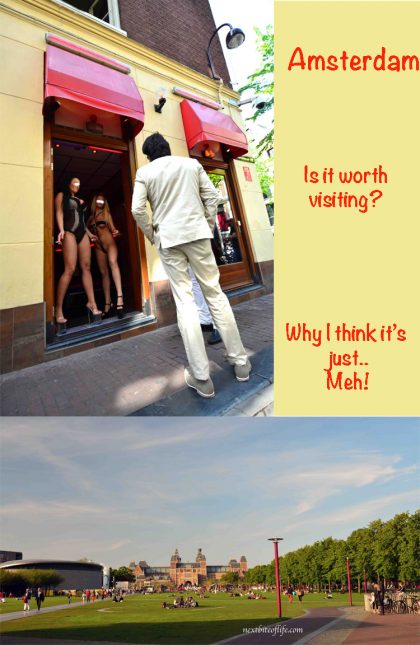 Amsterdam is ordinary. Even the red light district was meh!

We tried to go off the beaten path and find where the locals ate, but we failed miserably. They were all costly. We had okay Mexican food for 2 at a cost of €70. A plain burger, fries and a coke cost €12 each for lunch. They did have good Indonesian food though, it’s true what everyone says. We didn’t get to go to the Anthony Bourdain Amsterdam episode restaurant had eaten at. Just as well as we hear it’s €49 per person on the average, we ate the same  Rijstafel menu for €28 and €22 each on separate occasions.

Maybe we’re just cheap, but l don’t know how regular people survive living in Amsterdam. The wages must be astronomical. Average one bedroom prices in the city run around €1500 according to one of the nice local bartenders we chatted with. Yikes! He said most people lived outside the city and commuted. Our hostess confirmed just how expensive the city was. It’s true that we expected things to be a bit expensive, but it was a whole lot more expensive.

Unless you’re sleeping in hostels, eating  bread  and jelly for lunch or something, you are likely to spend €100 per person per day, even more if you are not very careful. I think at our ages, we are too old for that backpacking, will sleep with 10 people in a room hostel kind of life, so that brings the cost up a lot. If you’re young and can still enjoy the backpacking kind of life, then Amsterdam is a great place to visit. 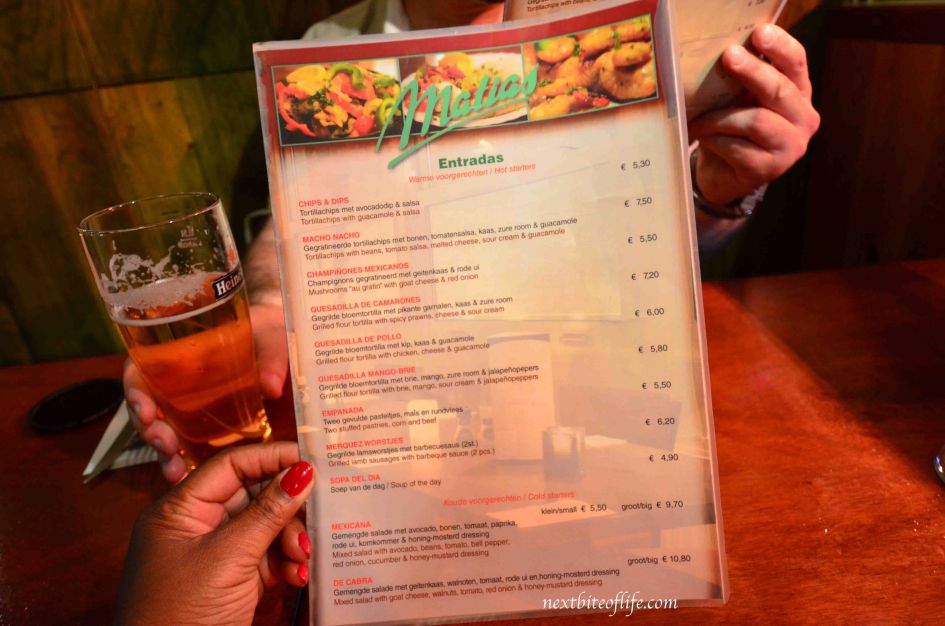 Check out those prices on this menu and convert to dollars to get an idea just how pricey Amsterdam is. Most of these are just starters. 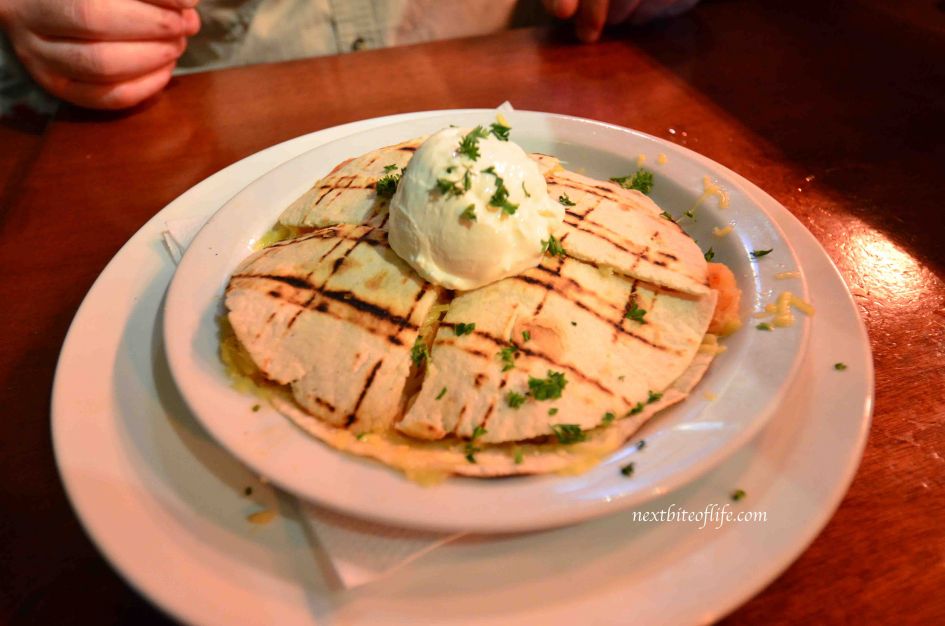 The $8 appetizer was small.. 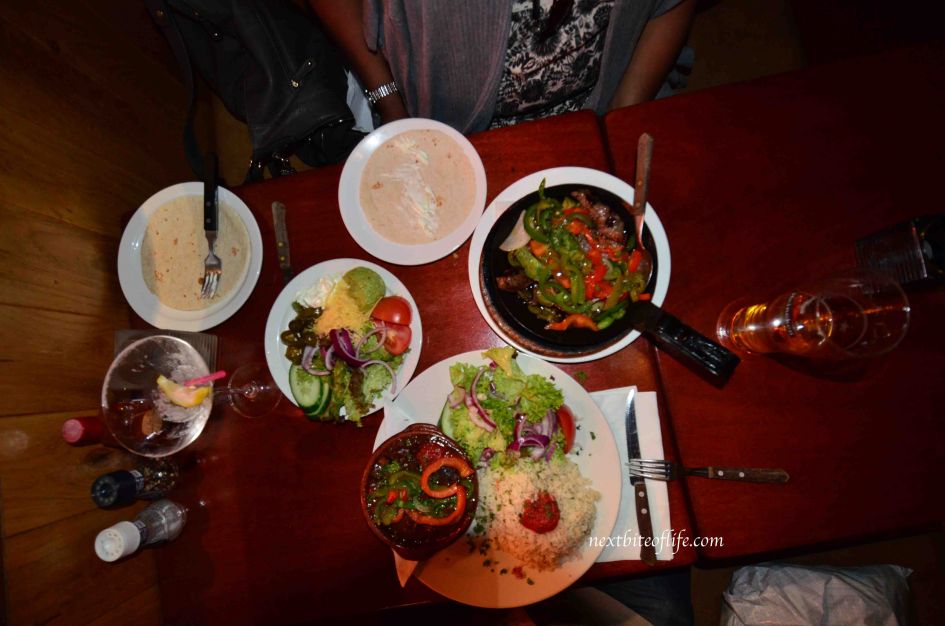 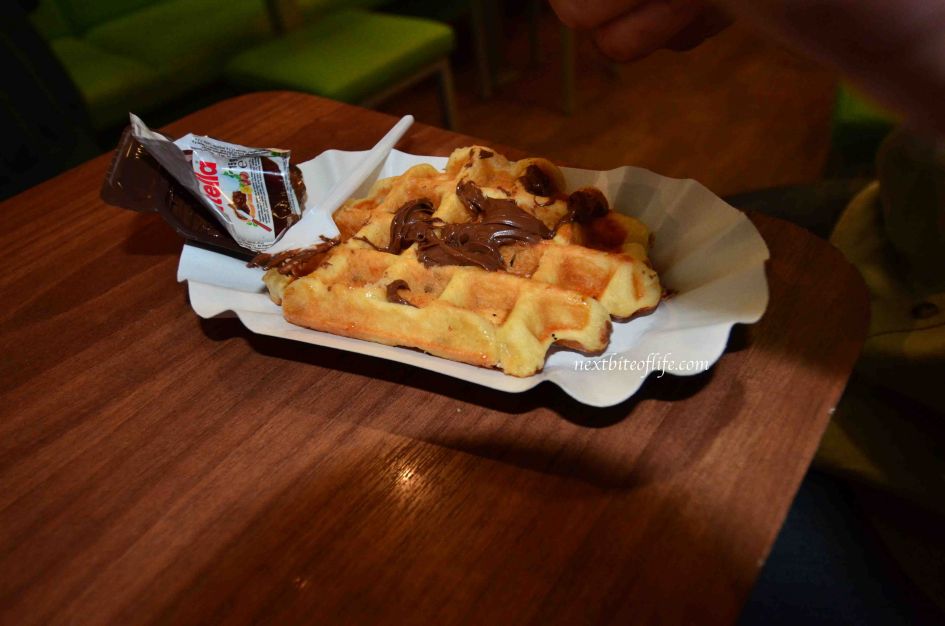 What to eat in Amsterdam. Waffle with Nutella… this was good. 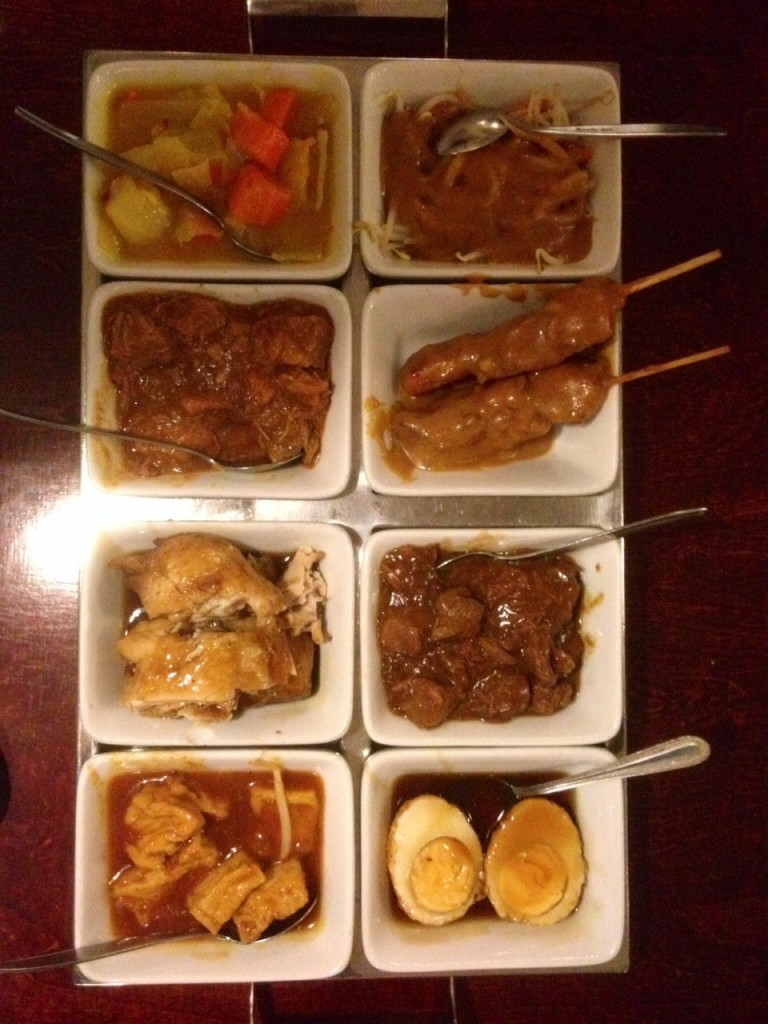 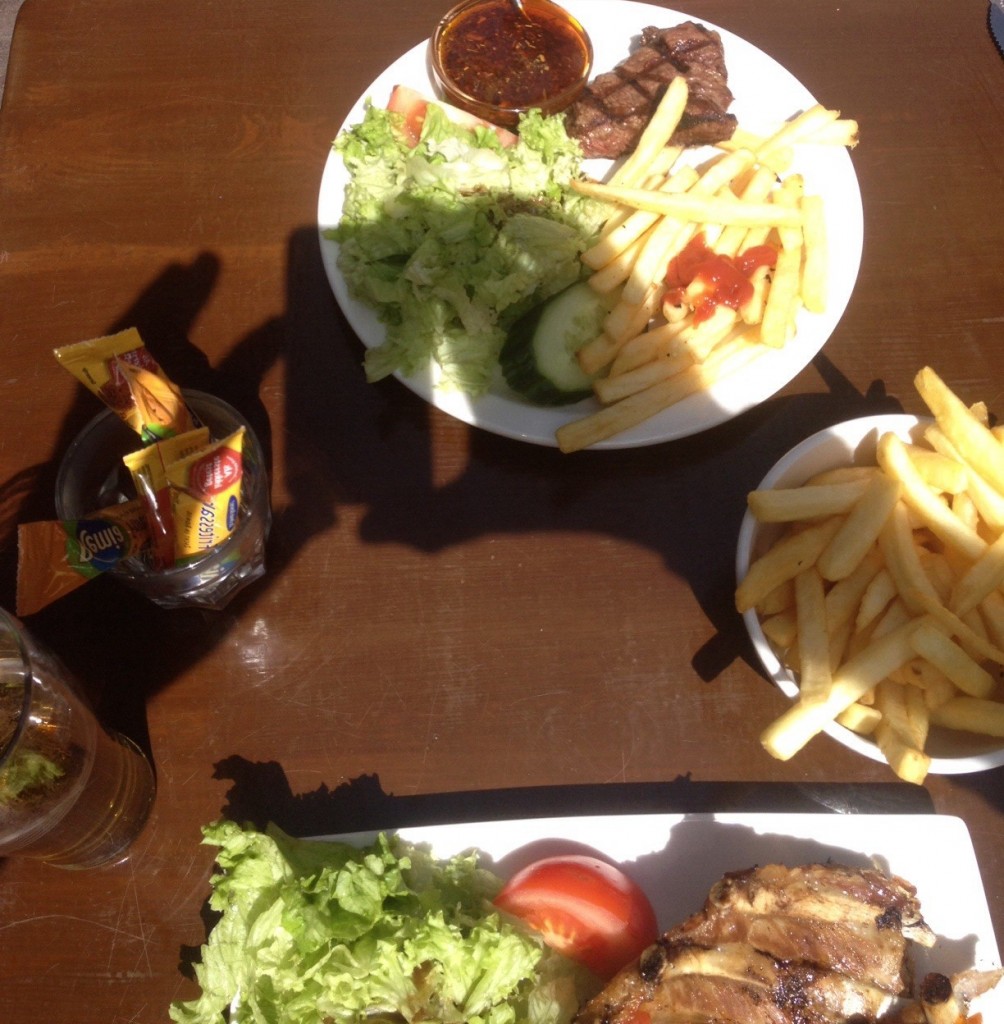 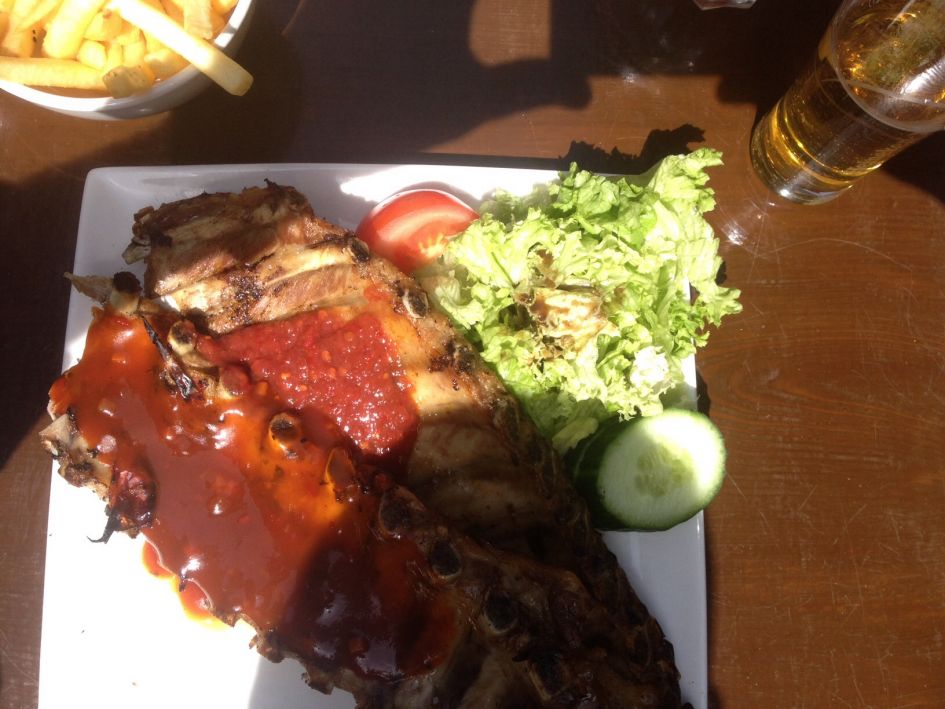 Mouthwatering ribs at the Rancho Grill. It was all you can eat though for €17 l think it was, a good option if you can eat maybe two meals a day to save money. Too bad the steak wasn’t all you can eat! :-) .

We did find a good selection of cuisine in Amsterdam, none particularly outstanding even though we enjoyed the Indonesian food mostly.

The red light district wasn’t very impressive either. The women looked tired, and old, not age wise, but a weariness that l noticed. There were the usual crowds of young men hollering, drunk and probably stoned as well, milling about, but l didn’t see any of them actually go in with the girls. It makes me wonder if there is enough money in that profession. I bet half of the guys lose their nerve and do not engage the girls. It makes for a good fairy tale  though to tell their friends back home. I mean who’s going to challenge them?

Guess where we saw all the men in the area? Yep! the bars were packed with them! :-) . Federico went to use the restroom at one of the places and l was the only girl in there. The only one!!! Haha! same place they spend their time at home!!! They will however tell wild tales of the amazing sex they had with the hookers :-) . I’m not judging, everyone has the right to make a living, and it is legal.  We saw people going in to see the live sex acts at like noon on Sunday.. new religion perhaps? 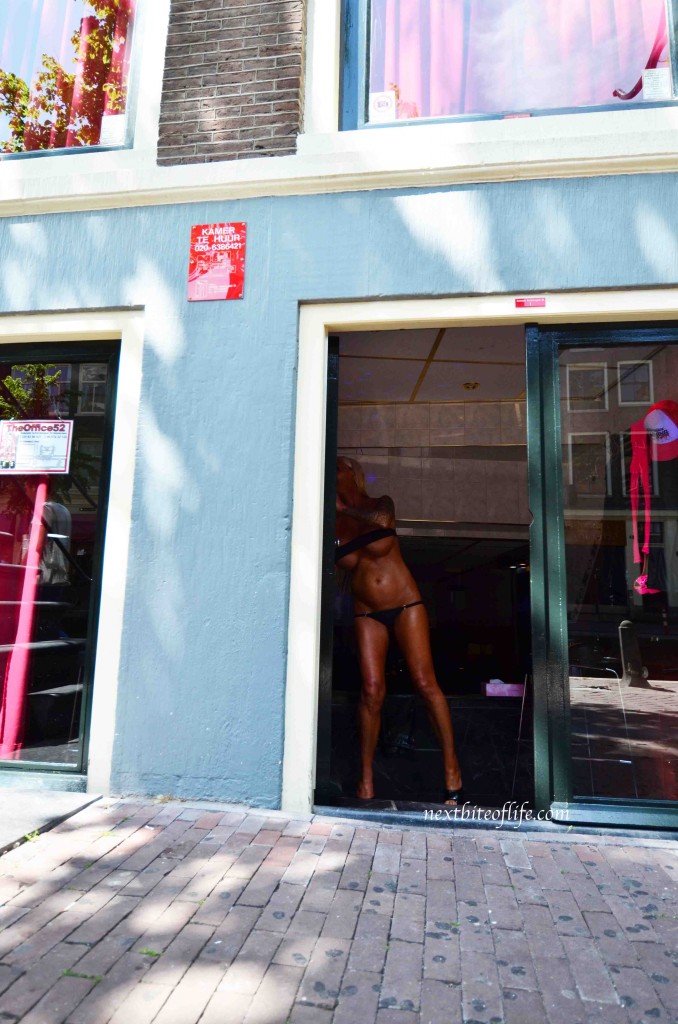 She works hard for the money..a prostitute in the red light district of Amsterdam.

Update: Tours of the Red Light District has been banned by the city. Not sure why anyone would want to take a tour anyway when they can just walk through on their own. 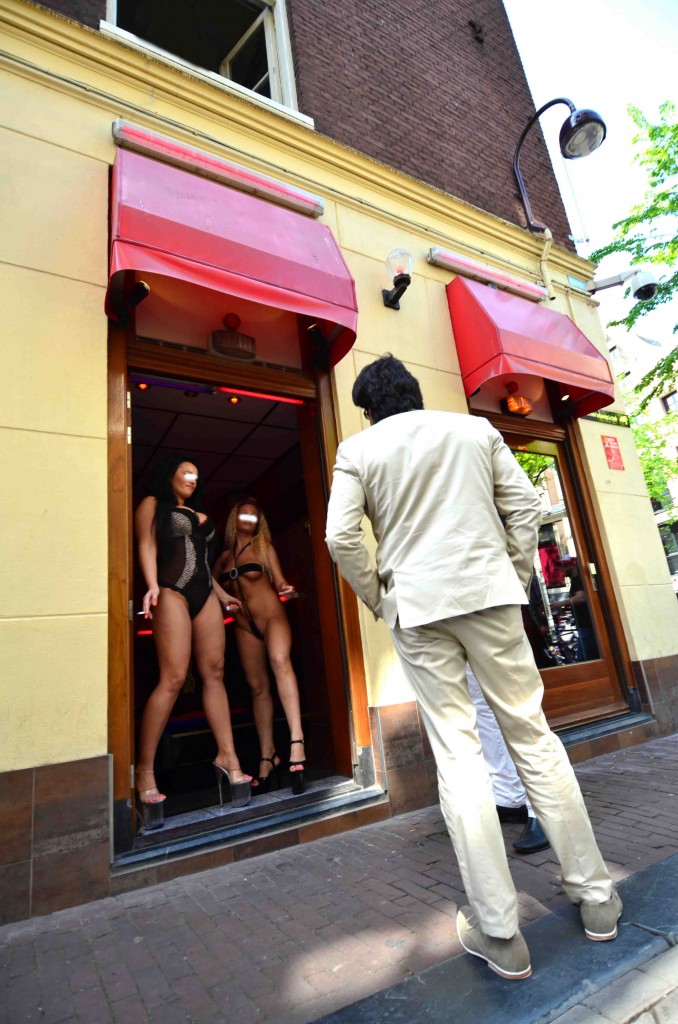 Is Amsterdam worth visiting? 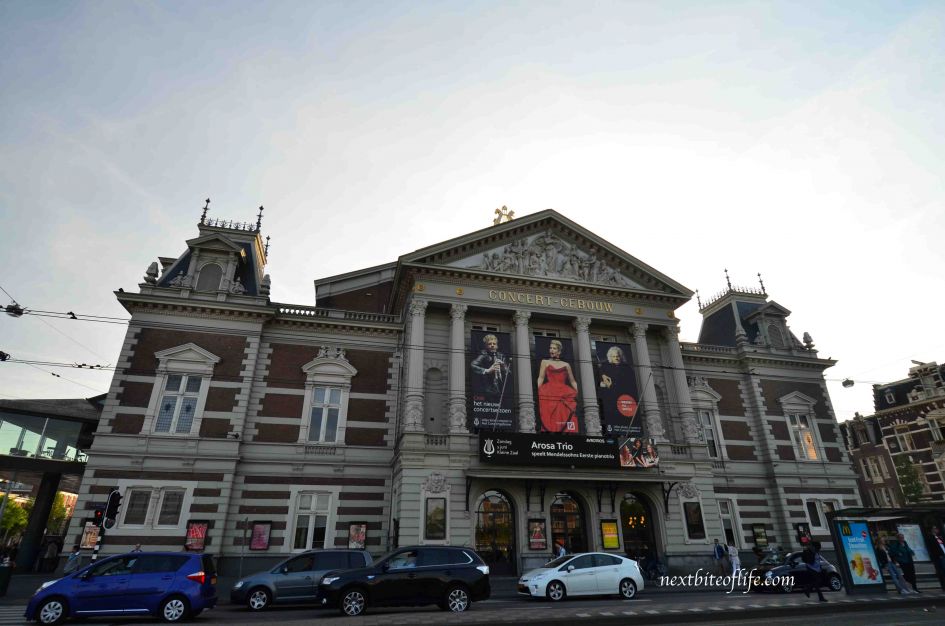 Where to go in Amsterdam include:

Amsterdam to me feels just like any of the dozens of other European cities and is nothing special. I always wonder how one city cleverly takes all the praise and equally desrving places are completely ignored and travelers are made to feel like they are missing something. Lisbon gets the love for example, but Porto is just as deserving, and on and on.

I think Amsterdam is worth visiting and  a great place if you’re young, and want to be a hipster or do stuff before you settle down. As an adult, I think most would be hard pressed to love it, but that is just my opinion. Don’t hate me for it. Perhaps we just missed the really really fantastic bits. I’m glad l went. Would l go again? Probably not. It is not my cup of tea so to speak. I found the city of Amsterdam very ordinary as opposed to extraordinary. Would l go as far as to say Amsterdam sucks? Not quite, but it’s pretty close. 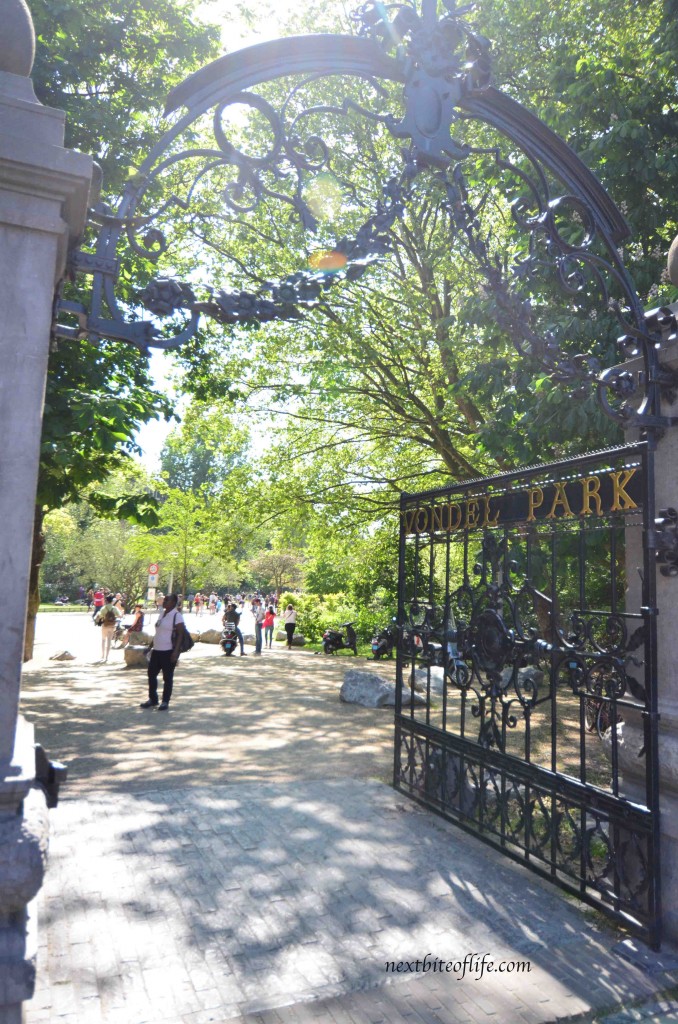 It is a nice park to people watch. We spent an enjoyable afternoon there. 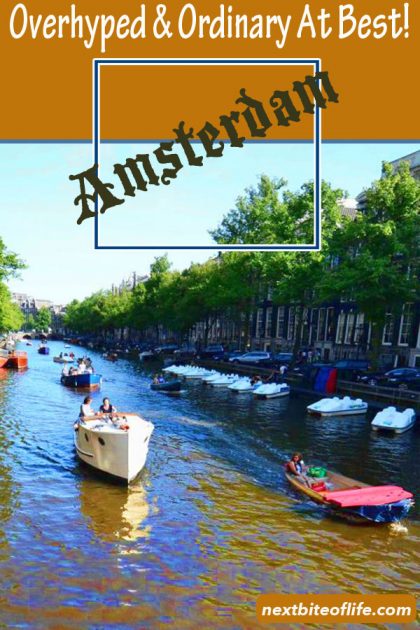 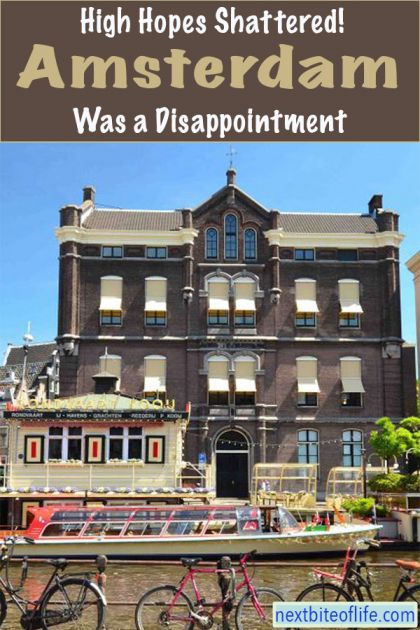 How about you? Have you been to Amsterdam? Do you share my feelings or do you think l am totally off the mark? Maybe it’s one of those places that deserve a second chance?