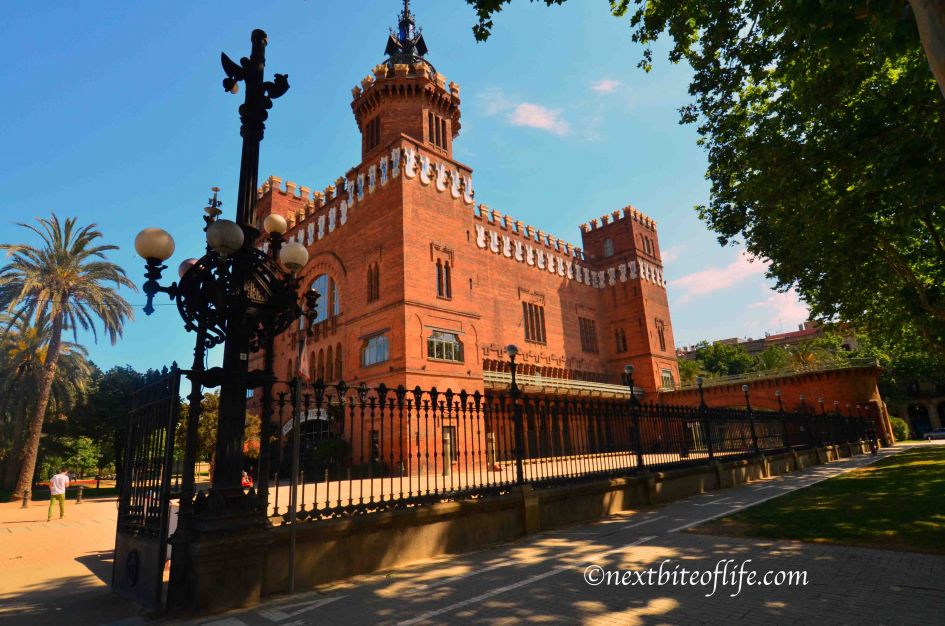 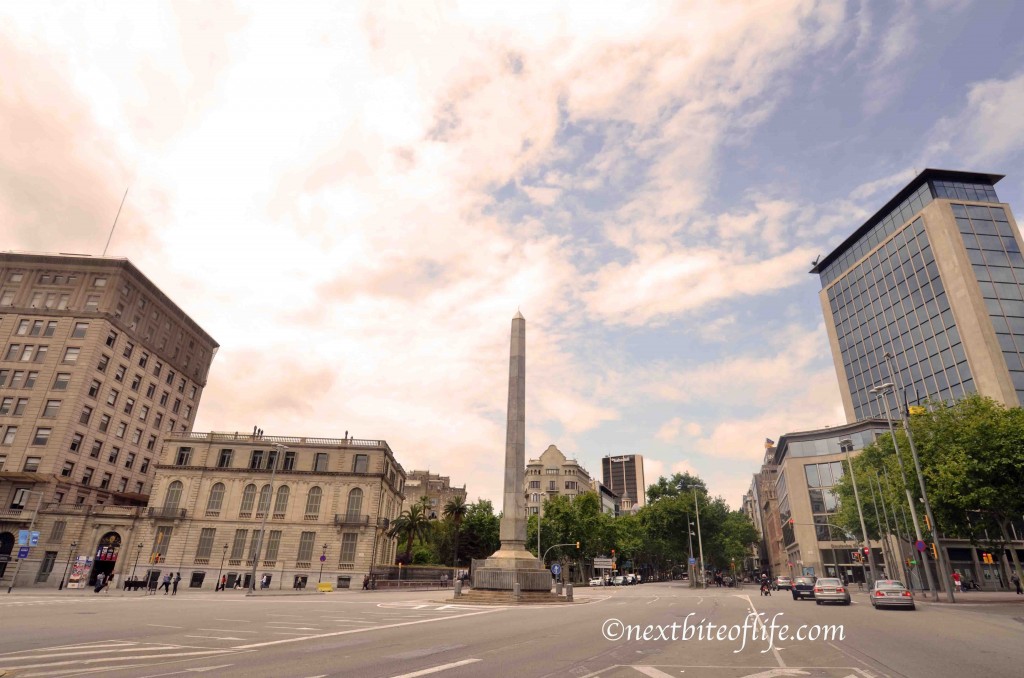 The Barcelona El Born Barrio was a fantastic find! Our  visit to Barcelona was awesome on the whole.  Everything from the sights, to the shops, the hotel and the food…the glorious food! Our hotel was very central and had lots of restaurants and cafés close by.  We ended up eating a lot of tapas at places that were a little off the beaten path. Most were very reasonably priced too.  More often than not, we finished eating before thinking about photographs of the food.

We ended up discovering the El Born neighborhood. It was quite the accidental discovery as there were so many tourists around the Barcelona Gothic Quarter, that we kept taking different turns, until we wound up there. El Born is definitely one of the best places to visit in Barcelona.

Affiliate links are contained in this post. If you purchase anything through the links, we receive a small commission.

It was great as it was not as suffocating as Las Ramblas. There were lots of funky cafes and shops. The streets were narrow and inviting. There were a lot of locals sitting at the cafes whiling away time, and we joined them some! Inside of this building are old ruins like this:

Protect your trip with the best travel insurance. Get your free quote.

The ruins  l understand are from the Spanish Succession from 1701-1714, a painful period in Barcelona Catalan history. It effectively put an end to Catalonia’s independence. Independence that is still on their mind till today, as Catalonia wants to split off from the rest of Spain once again.

The El Born used to be the Mercat del Born, but is now a cultural center. It was interesting to see, and it was free. The building itself is quite impressive, with it’s huge cast iron and glass. It is often the site of protests and calls for independence. They also put on concerts and plays there. I definitely recommend a visit. The whole La Ribera Born neighborhood is quite cool in my honest opinion.

From there, it was about a 10 minute walk to Parc Ciutadella which is just beautiful. There is nothing quite like getting lost in a big city. The flowers were blooming and families were out enjoying the lovely sunshine.

Now for the food in Barcelona:

Where to eat in Barcelona:

There are two special places l would like to tell you about . One, we discovered while walking down Avenue Diagonal. We went off on one of the side streets and spotted this little Tapas place called Trotamundo. It looked so inviting, we decided to quench our thirst. The tapas were very good, really fresh and tasty.

*Updated: Permanently closed* What a shame!

The hummus at Trotamundo was the best l have had in a very long time, period. It’s a shame they are gone forever, unfortunately one of the risks you take opening tapas places in Spain.

There are so many that it’s hard to stand out.  l love hummus, going back to my days in college, some of my friends were middle eastern and made the best hummus and Falafel. We made sure to try many places as we walked along, a different tapas at each stop.

The mussels we had at another place whose name eludes me now was excellent and drenched in marinara sauce. The only thing that was annoying was that neither one came with bread!!! You had to order that separately, which l think is taking the tapas thing too far. I mean how can you give someone marinara sauce, and no bread? What are you supposed to lap up the sauce with? And hummus without pita bread? My husband made his feelings known in no uncertain terms. Other than that, we loved it.

Our favorite restaurant was “Buenos Aires Grill“. We chose it based on reviews on TripAdvisor, my favorite go to. I spotted a signed Barca jersey in one of the photos posted by a previous reviewer. It is located in the L’example neighborhood, where we stayed. From the minute we walked in, to when we left, we were given excellent service.

The food was absolutely delicious. We shared the shrimp in garlic starter. It was so freaking good, much better than the one we had in Madrid, and that was great..

I had a medium rare Rib Eye steak as my main course, and it was done to perfection. He had the grilled Ribs and they were succulent. We chose fries as our side.

We shared a dessert of pancake with strawberries and vanilla ice cream. It was heavenly!

All this was polished off with a lovely bottle of Spanish wine.

and this refreshing lemon sorbet.

The owner came by to say hello. Turned out he spoke Italian, and loved football. So began a lengthy conversation.. :o) We had missed Messi’s visit by two nights it turned out, and the signed jersey belonged to Yniesta. He showed us his personal cell phone pictures of Messi and some other players at a BBQ he had in his house! He had known them for a while as this grill was a recent addition to his original grill in Argentina! I highly recommend this restaurant. It was €80 for our dinner, but it was worth it to us. We like to eat cheaply when we travel, but we always make sure to have a splurge dinner. 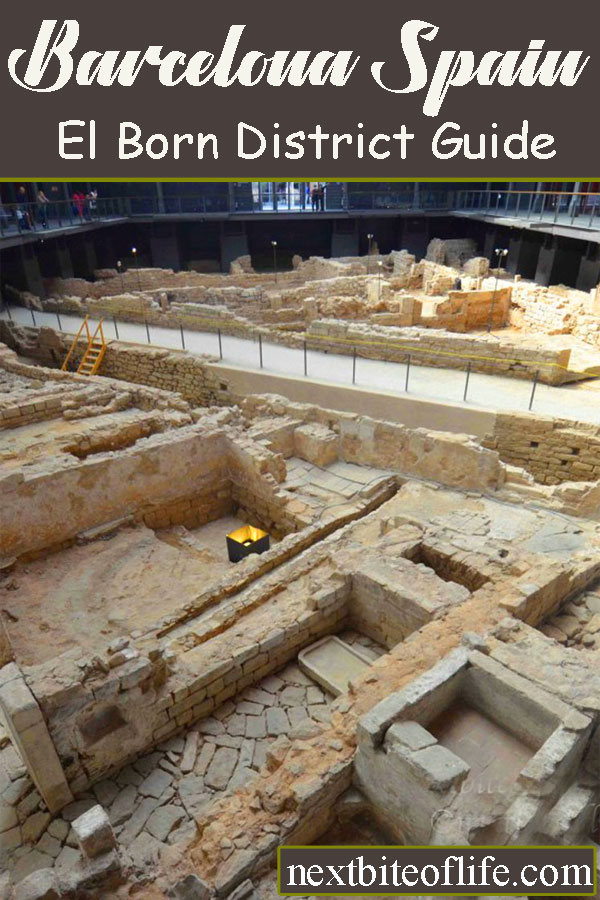 The El Born area of Barcelona is wonderful. In the old days, this was where the noblemen stayed and had seaside properties. It is still a wonderful, artistic area with quirky and stylish boutiques, not to mention the wonderful cafes and restaurants. I think it is one of the best places to stay in Barcelona.

The thing to remember is that Barcelona city is more than the usual suspects. It’s nice to visit the touristy areas such as the  Ramblas and Sagrada Familia, but part of traveling is discovering how the locals really live by visiting the normal barrios such as El Born.

Inspired? Pin it for later; 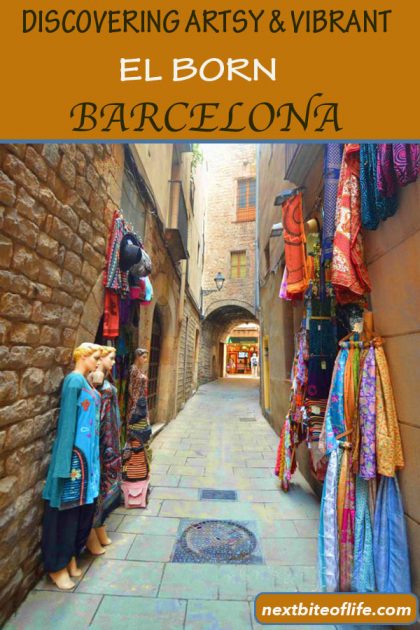 We Loved the Barcelona El Born barrio! Have l convinced you to go there? Is it going on the bucket list, or are you scratching it off the list, thanks to me???