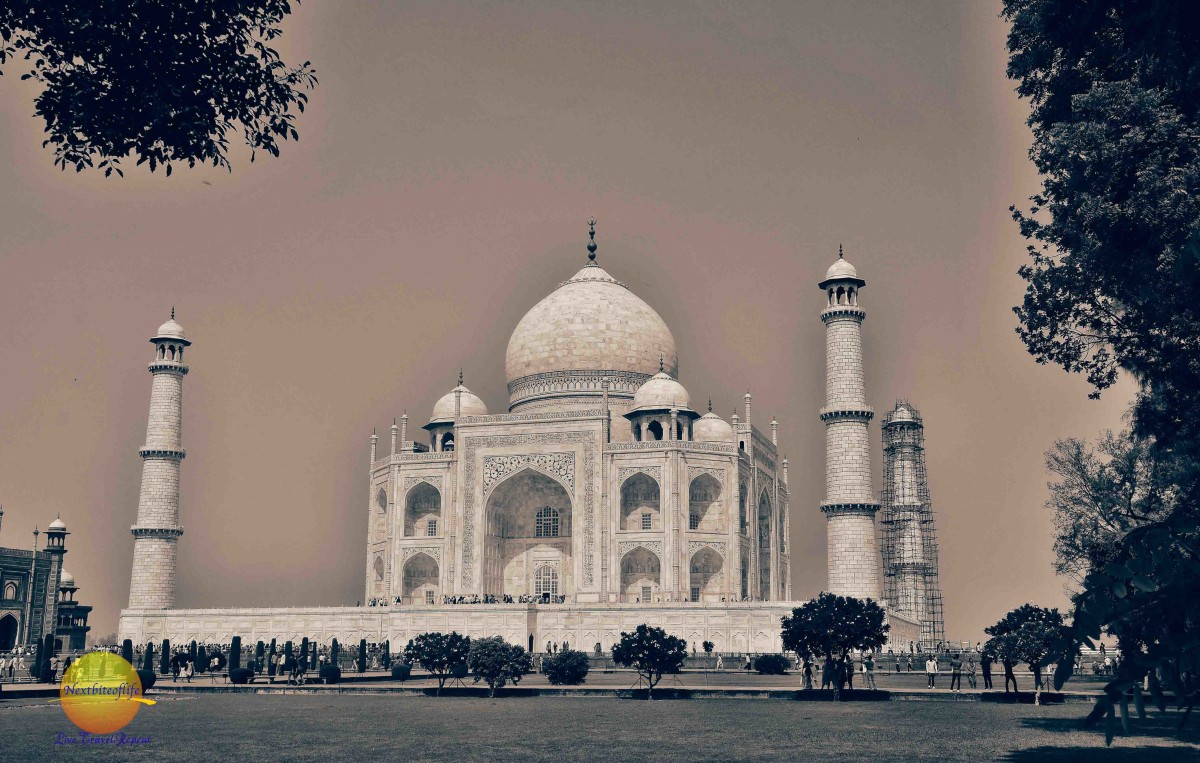 Taj Mahal to me, is the mother load of all tombs of which there are plenty in India. This ginormous mausoleum, an ode to love lost, is truly one of the magnificent wonders, and yes, it is touristy, but definitely a destination that needs to be seen on an India visit. Here is a recap of our visit to the most beautiful wonder of the world. 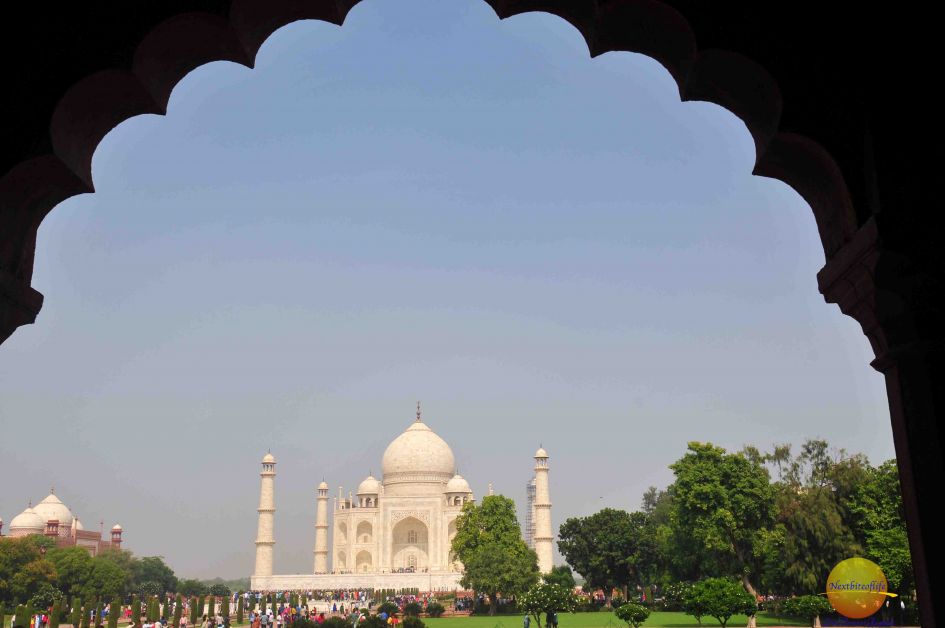 Agra Taj Mahal image from the entrance of one of the wings.

Where is Taj Mahal located?

The Taj Mahal mausoleum is located on the Yamuna River south bank in the city of Agra, a few hours drive from Dehli and a popular day trip from New Delhi. We did this day trip with a private driver, but one can also do a private guide tour complete with pickup/drop off, breakfast and also a stop at the Agra Fort.

The emperor, Shah Jahan built this tomb in honour of his third and favorite wife, Mumtaz Mahal who died while giving birth to their 14th child. She was only 35 years old. Her dying wishes were that he not marry again, and also that he build something in her memory. Bet she had no idea he was going to come up with this doozy!

When was the Taj Mahal built:

Construction of the Taj Mahal began in 1632 and finished roughly sixteen years later. Visiting this jaw dropping UNESCO world heritage site was one of the highlights of our visit to India. The architect of Taj mahal was Ustad Ahmad Lahauri, who was the court architect to the emperor and the leader of the board of other architects. How much did it cost to build the Taj? In today’s currency, it would be roughly 850 million U.S dollars, a princely sum indeed.

We hired a private taxi for our journey to the Taj Mahal. Agra about a three and half hour journey from New Delhi. We left pretty early, about 5.30AM so as to avoid the traffic. Our cab driver, Pratheel,  was a lovely young man who had been recommended by the owner of the guest house my brother was staying at.

To say it was a nerve wrecking journey would be putting it mildly . Reason being that big trucks and trailers are on the road in the dark hours of the day as they are not allowed on them during daylight. Navigating through the narrow roads,  avoiding both pot holes and wide loads while barreling down makes for two very nervous passengers! I became an instant back seat driver and must have been a pain in the rear end to him. He just smiled through it all. He was probably used to it. 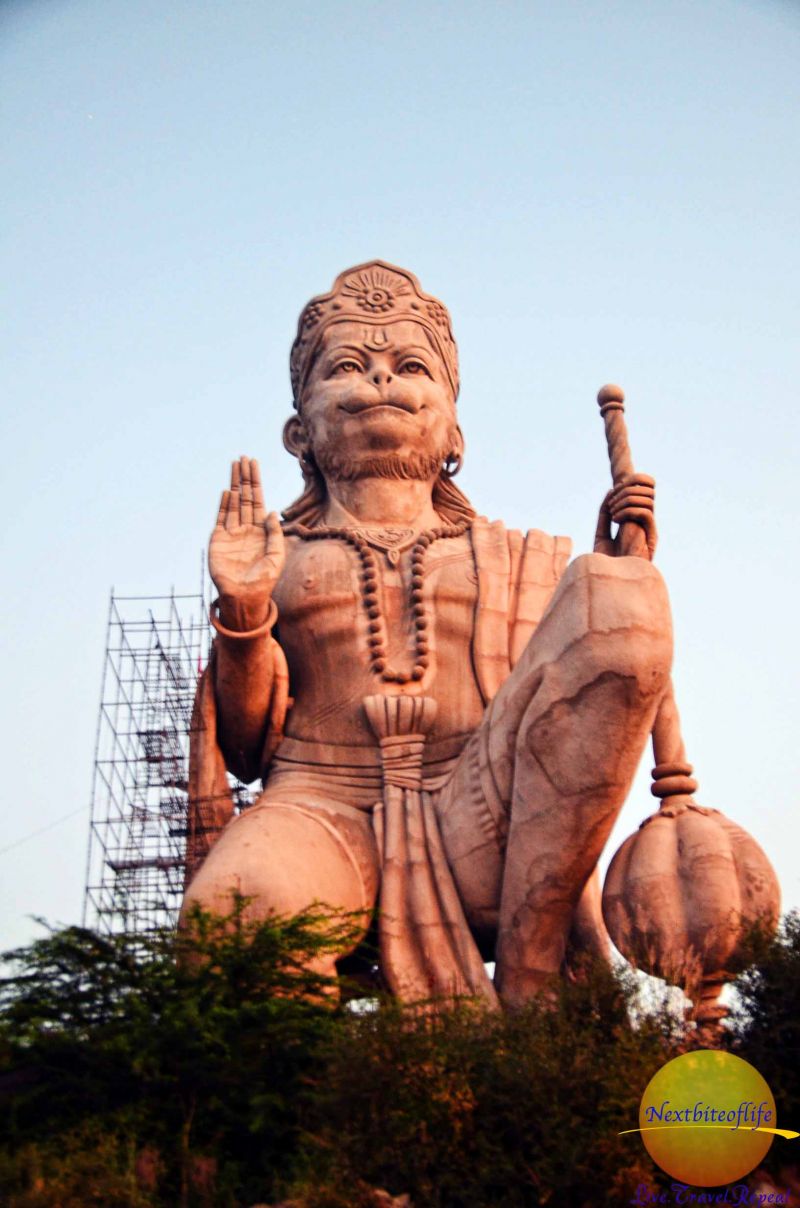 Land of the Giants moment on the way to Agra. The driver told us a great story about him, and even showed us a video (while trying to drive! We made him pull over.). He is god Hanuman.

Cope with vacation unforeseen circumstances with the best Travel Insurance

About an hour into our trip to Taj Mahal from New Delhi, we came upon this huge stature of an Indian prince whose name was Hanuman. l believe the driver said, but l might be spelling it wrong.  It was almost scary for me as this stature was humongous and with the streets still dark, it was a little intimidating.

l felt like l was in the land of the giants and this thing was going to reach down and squash me! He told us the story of how she had been sent off to earth by her father for disobeying him. He even showed us a YouTube cartoon video telling the tale, which he insisted on watching along with us.

The driver was thoroughly prepared for the bad roads. He had one of those back support things on the driver’s seat, which he generously offered when he saw our discomfort, something to consider if you have a bad back. 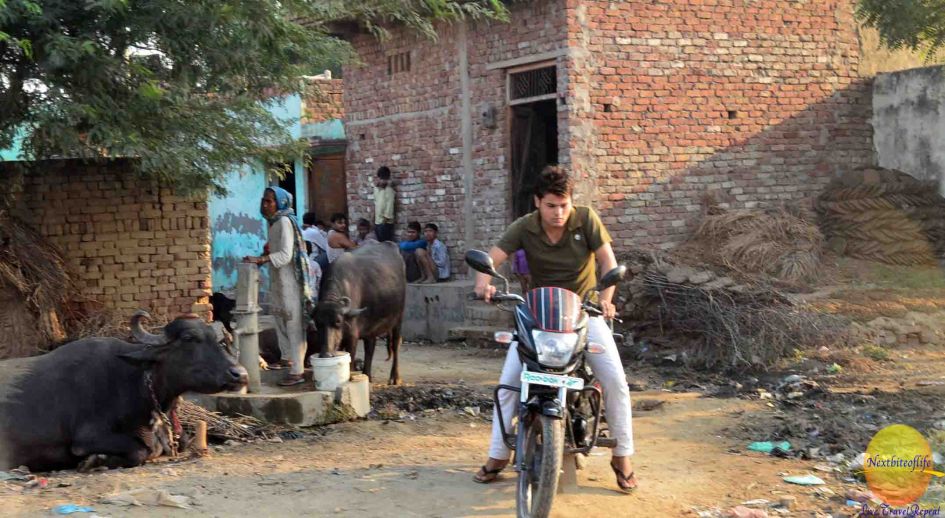 Reminded me of home :-( , squalor, desperation, doom, resignation. What to do in New Delhi includes seeing how the people really live. 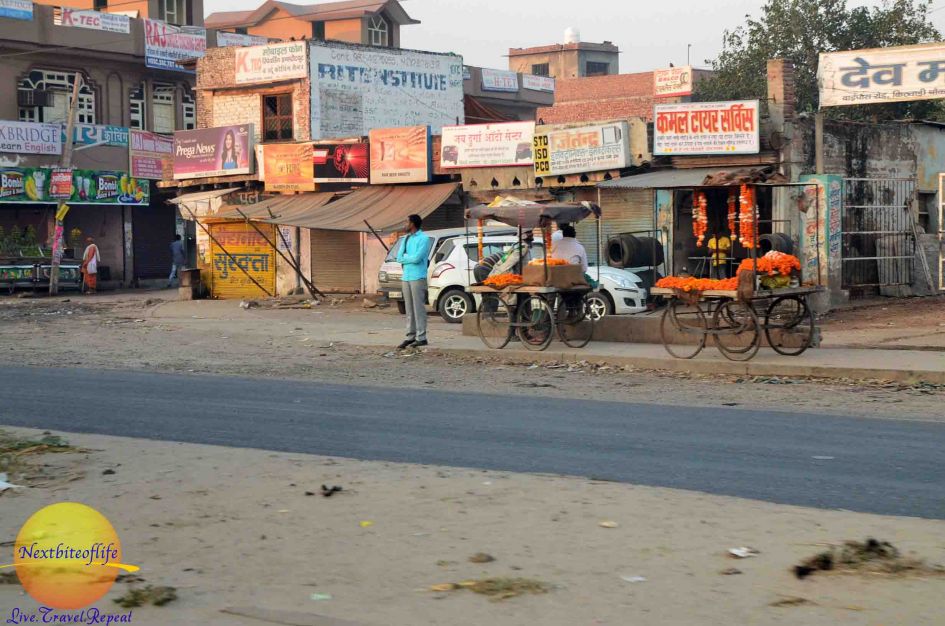 Day to day life in India. Your India itinerary should include hanging with the locals like we did several times. This was on the way from New Delhi to Agra.

Parts of the highway were nice, and it was pleasant to speed down it for long stretches. Upon hitting Agra though, we slowed down quite a bit. Bad roads and traffic. It allowed you to see how poverty-stricken the area was. It is quite the contrast to the Taj Mahal. One would think that Agra being one of the most visited places in the world would get the same love as dear old Taj Mahal. Sadly, it is not so.

Agra is dirty, smelly and the neglect quite obvious. It highlights how truly far apart the rich and the poor are. Agra was  the former capital of India before it got moved to New Delhi, so l thought it would look nicer, but nope. It reminded me a lot of home in Nigeria so it wasn’t quite as jolting to me, but l can imagine for first world citizens, it might be a shocker.

We had arranged for a private guide for our tour of the Taj Mahal, and the driver picked him up once we got to Agra. I highly recommend a guide if you go visit. There was a really long line to get tickets, and l was crushed for a moment. Luckily, as a guide, he knew where to go, and was back with tickets for us within five minutes. Taj Mahal Entry fee is $11 for foreigners and just 30 cents for Indians.

Try and imagine how long the line was for the locals. Luckily, there is a separate line for foreigners. Entry is free for children under 15, foreign and local. It is about a 15-20 minute walk to the entrance from the road. There are people with camels, horse drawn carriages and golf carts offering rides for about a dollar. Totally worth it on a hot day, we took one on the way back. I was tired!

Click here to find the best priced hotels close to the Taj Mahal: 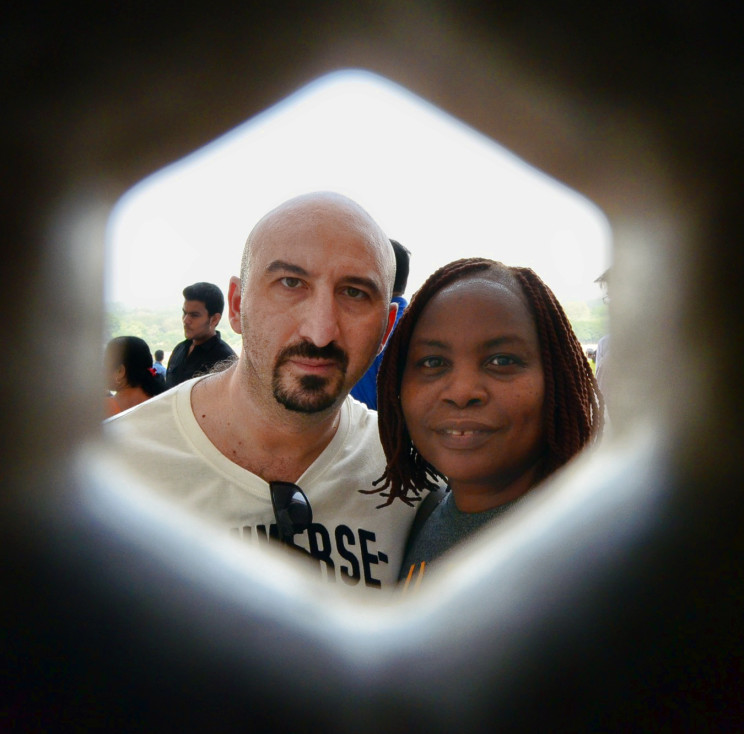 Federico thought he was traveling with a rock star. So many people asked me to pose for pictures with them and their kids. They were so curious about me and my hair especially. It was quite enjoyable, but tiring as well :-) .

The entrance to the Taj Mahal is already very nice, but when you look across to the dome itself, you are just gobsmacked by how beautiful it truly is. The grounds are so lush and the fountains are just lovely. Halfway between the entrance and dome is the Princess Diana bench.

This is the bench that she sat on when she visited the Taj Mahal, and there is a line to take pictures on and with it. Here is information about Taj Mahal, thanks to our guide. It made us understand better the history of the Taj Mahal. 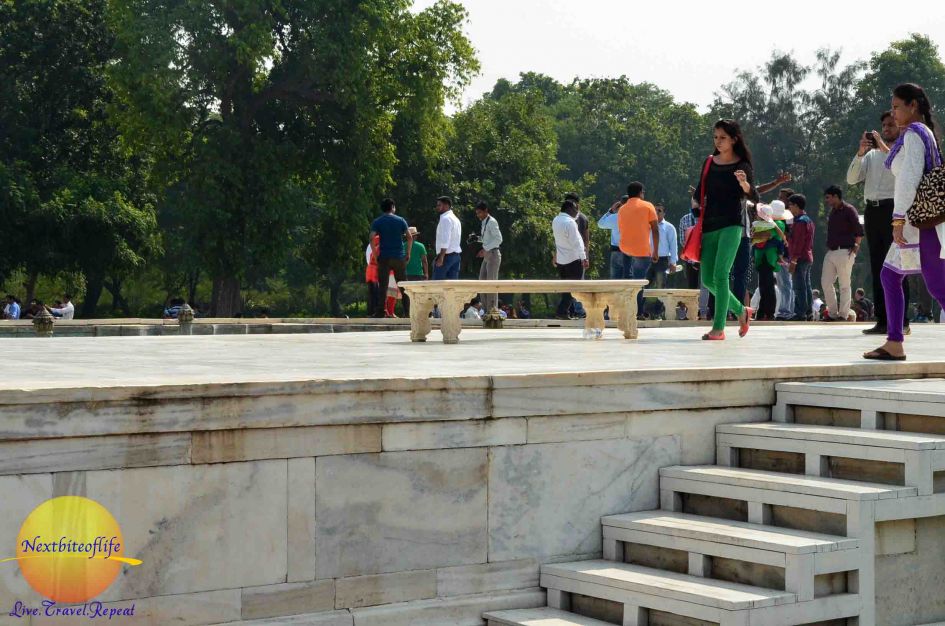 The real bench is the other one..but we were not willing to wait. One is as good as the other..and who’s to say she didn’t sit on this one too?? ;-). It was great learning about Taj Mahal in English we could understand. It brings a deeper meaning to the visit and the guide was very proud of his heritage.

Taj Mahal: Why was the Taj Mahal built? 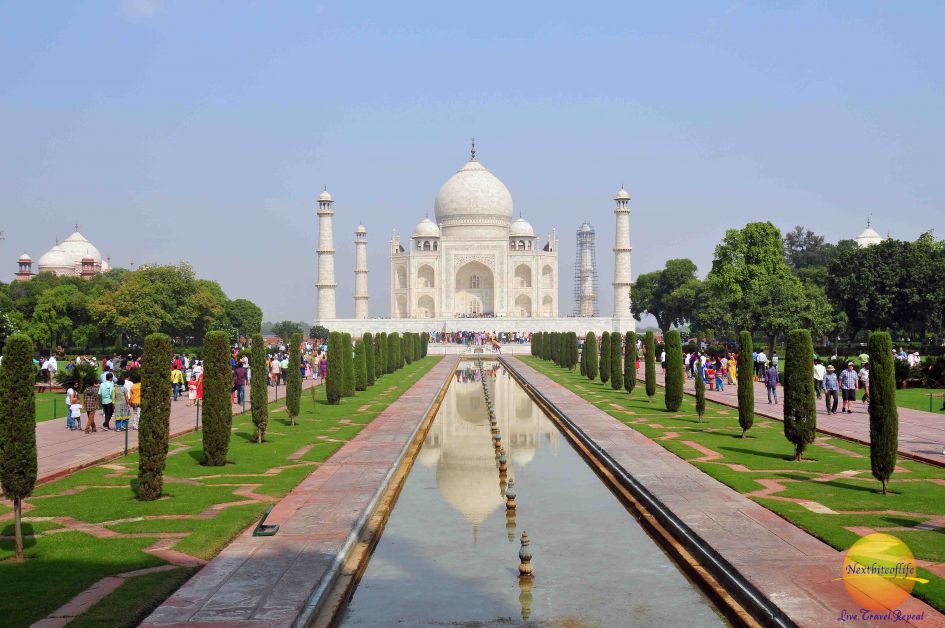 Taj Mahal history is pretty romantic.  I love this view of the Taj Mahal with the serene fountain.

Taj Mahal : One of the 7 wonders of the world 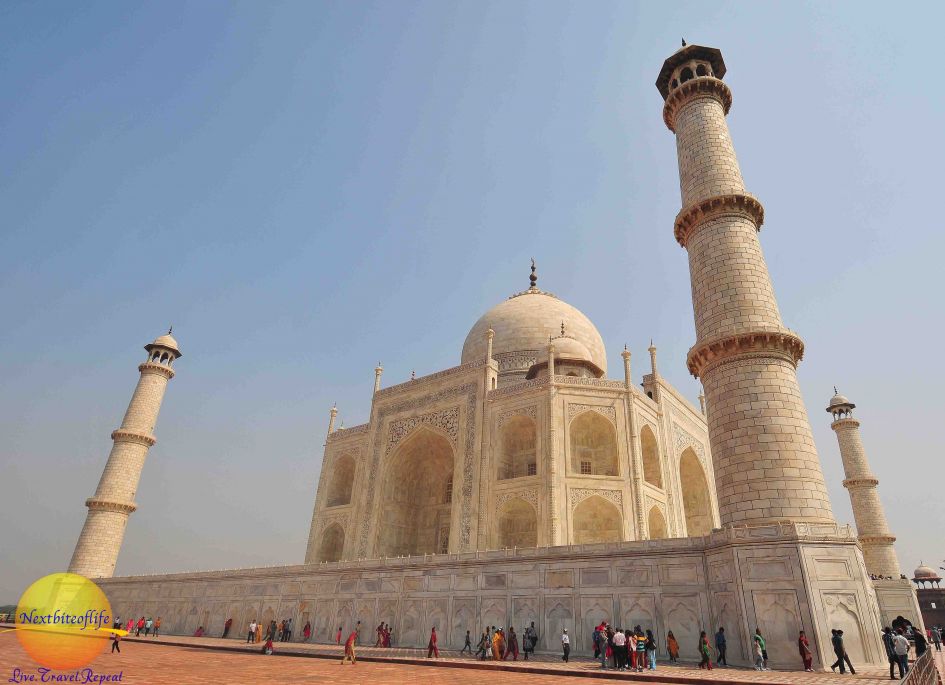 Absolutely beautiful side view of the Taj Mahal. Everlasting love at its most luxurious. 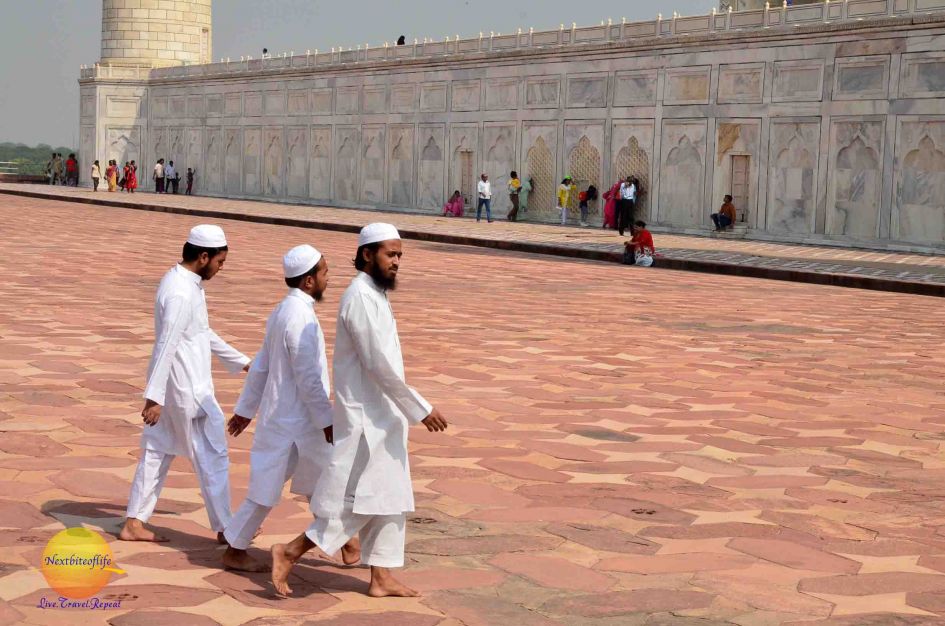 What to see in New Delhi? visit the nearby Taj Mahal. Love this image of barefoot men walking towards the tomb. 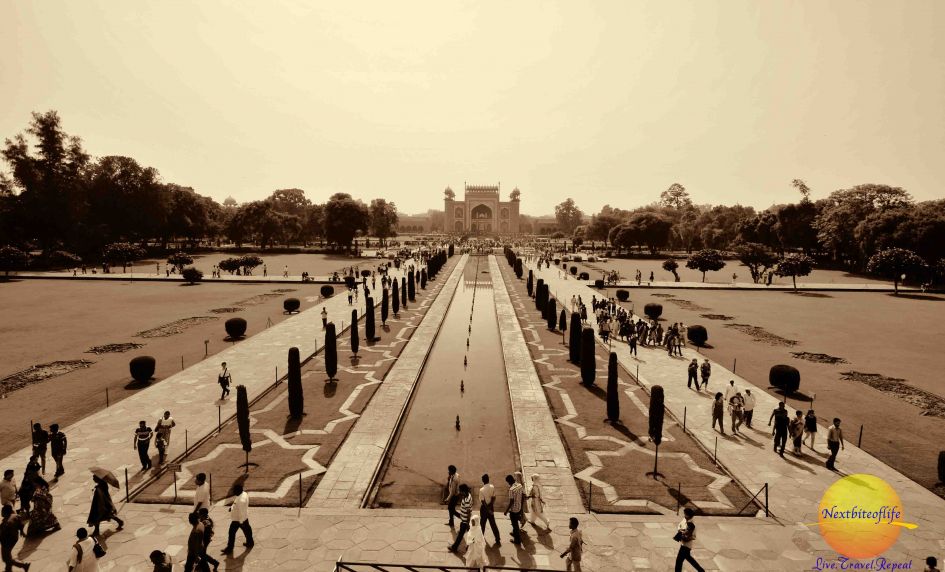 The Taj: It is huge! What a grand view though..It was a bit of a walk from the entrance. You get a feel for the distance and can understand why people choose a carriage ride just to get to the gates because you have more walking ahead of you.

There are no pictures allowed inside the mausoleum. The Taj interior is circular, so one enters one way, make your way around,  around to come out the other side of the same circle. It was extremely crowded, and there were guides to make sure the line kept moving.

Our guide had an old man use a lighter on the Taj Mahal marble to show us that the marble  was not only fireproof, but that it threw off pretty colours as well. Despite the crowd, there was also an echo in the chamber when he made sounds that reverberated. That was pretty cool. 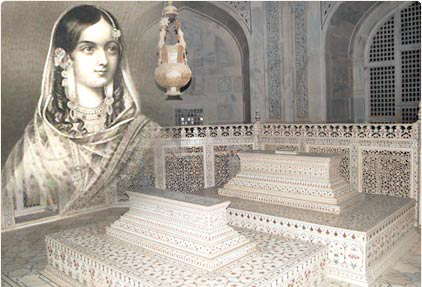 Wikipedia image of the tombs..Mumtaz was pretty, was she not?

If you’re visiting the Taj Mahal with children, Jenny Lynn has a great post on accomplishing this with the least fuss. Plan on spending about three hours on your Taj Mahal visit. We thoroughly enjoyed the back story of lost love. Our guide was awesome, and made it more pleasurable for me as l like learning things about places l visit.

Federico barely listened to the guide, he just wanted to take pictures :-). He ditched us often. It’s one of those places that I never thought I would get to see in my lifetime. because it had never been on my radar to be honest.

Is Taj Mahal worth visiting? You betcha! That is of course assuming you are in India already. Is it worth going to India just to see it? That’s something for you to decide. If it’s on your bucket list, why not? There are other places in India that you can incorporate into your holiday. 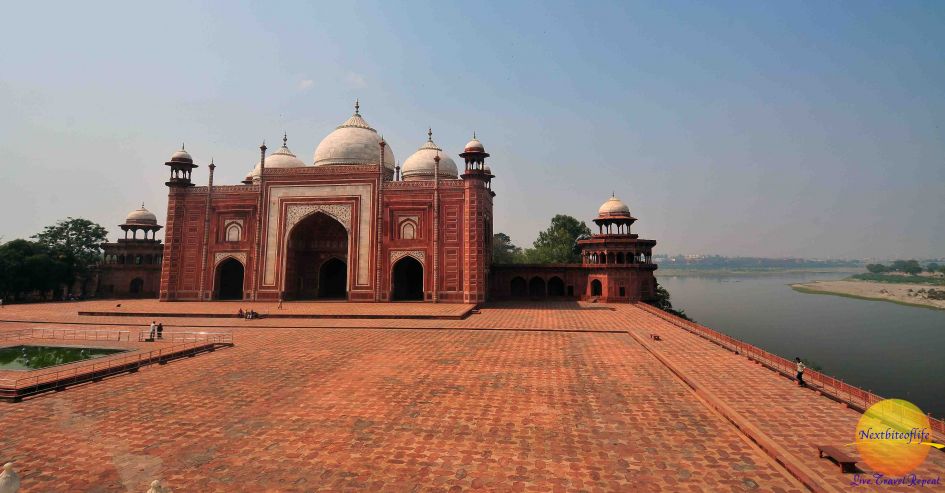 Taj Mahal Agra India Mosque: The attached mosque and grounds that is used for prayers on Fridays with the Yamuna river view. 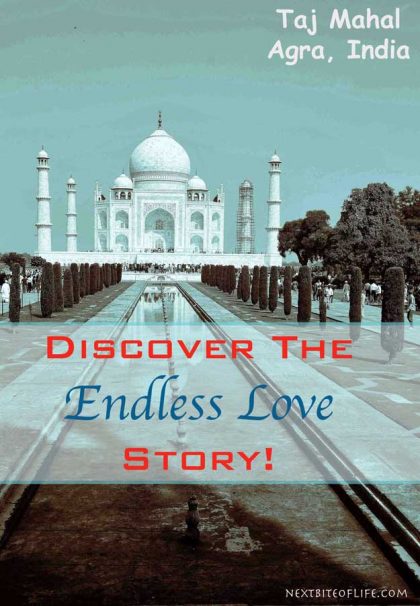 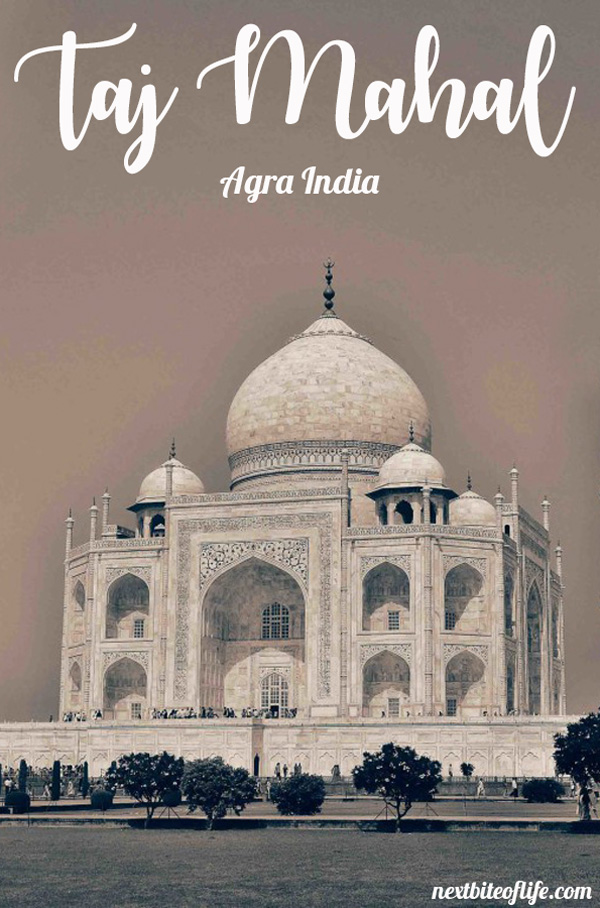 What do you think of the Taj Mahal story? Have you been to see it? If yes, did you enjoy it? If not, does it sound like someplace you would like to visit? Do you believe in such grand gestures of love?