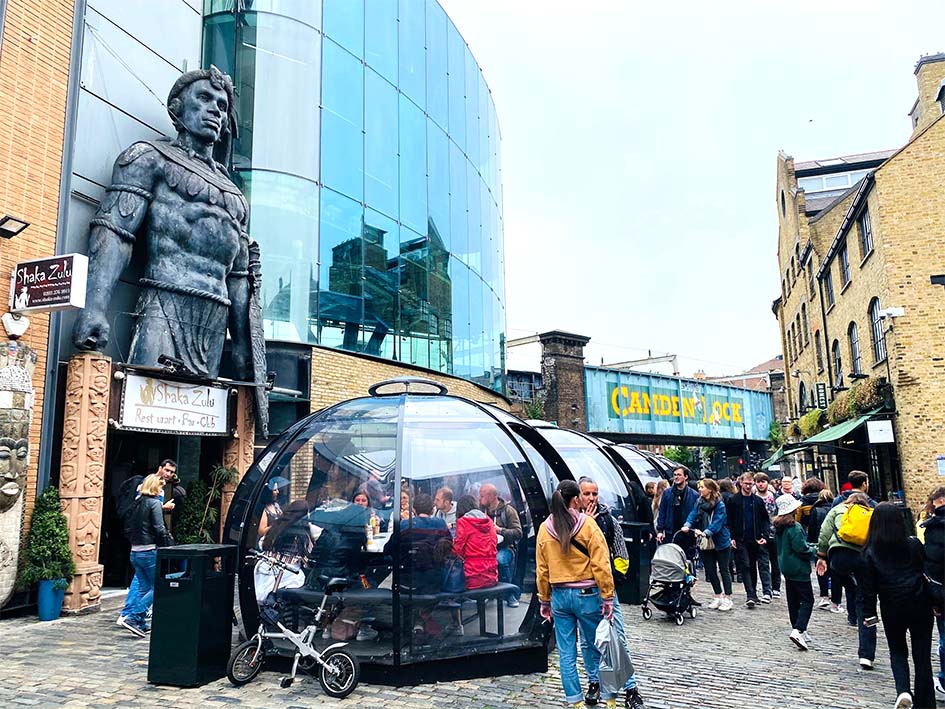 It’s been quiet around here, and for good reason. We have just come back from a wonderful London trip. The icing on the cake was that neither one of us realized it was the Queen’s Jubilee, her 70th year as the queen of England. June is without a doubt the best time to visit London, it turns out.

Our trip to London was a spur of a moment thing, and it was supposed to be a five-day visit. In the end, it ended up being double that amount of time because the airline prices were expensive (now l know why 🙂 ), so l kept adding a day on both ends to soften the blow. I should have realized something was up.

Best time to visit London and the Royal Jubilee

You can just imagine our surprise upon seeing all the celebratory decorations around town in preparation for the jubilee. I have to say that l was initially not impressed as I’ve never been a monarchy fan, and therefore do not keep up with the news.

It wasn’t until a friend mentioned that we were in a historic moment that it finally sank in, and l adjusted my thinking. Having been to London quite a few times, I was nonchalant, but l do realize now that we were indeed lucky to be a tiny part of the celebration. There was intangible happiness and pride that was everywhere. It’s safe to say that the Brits love their royal family, at least the Queen.

Why June is the best time to visit London:

The first and foremost reason why l think June is the best time to visit London is the weather. There are very few days of rain in June (about 8), and even then, they are usually in short bursts. We had one day of rainy weather where we had to duck into stores and wait out the rain, but seven of the ten days were gorgeous with temperatures averaging about 60-75 degrees while the other days were clear but windy and a bit cooler.

Yes, I did wear a jacket on a daily basis because l am always cold, and any little bit of wind makes me even more so. Most tourists and everyday Londoners were in t-shirts and shorts, which l thought was just sheer madness.

The days are long with over eight hours of sunlight, so you can enjoy the outdoors for a lot longer. When the weather is pleasant to boot, you don’t mind waiting in a long line for tickets, restaurants, etc. A lot of restaurants have outdoor seating, way more than before since covid days and people-watching is great.

While London in June usually has a lot of visitors, it is not as much as when it’s full-on summer, so you can still enjoy what the city has to suffer without the insanely long queues for everything, from restaurants to museums, and shows.

Things are not “summer priced” yet:

It’s no secret that prices in summertime increase in most major cities, London being no exception. The summer season starts on June 21. If you’re able to visit London before this, you can still enjoy somewhat reasonable prices, for London that is :-). It’s forecast that a mug of beer will average a wallet-busting 8 pounds this summer.

The kids are still in school:

Yeah!!! Most London schools break for summer in July so you practically have the city to yourself with other adults. If you’ve ever been stuck on a bus waiting for a mom and dad trying to choral three to four kids while lugging groceries and prams etc. while behind them is another family with screaming kids, you’ll appreciate that.

What to see in London:

In addition to the usual sights, such as the London Eye, Trafalgar Square (top picture), Big Ben, and the museums, we also went a bit out of the city to feel like London locals. We were in search of new experiences, which l felt that we got.

What to eat in London:

Some of the observations we made were that, much like the rest of the world, the prices in London are insane! For instance, fish and chips, a staple, which before would have been between 7-8 pounds, were now 14 pounds and above (assuming you could still find it on the menus, the same for bangers and mash which Fede was really looking forward to).

Coming from Valencia, where a full meal with starter, main, dessert, and a beer or glass of wine costs less than 13 euros (more often 10 euros), it was shocking. We continued to be shocked for those ten days :-). Valencia continues to be a bargain despite the fact that prices are also creeping up.

London is so expensive and l always feel for the workers as most can not afford to live in the city. While this is indeed the same in other places such as Paris and Dubai, etc., it just seems like London slaps it on quite thickly. I have written previously on doing London cheaper.

Standing on a street in Knightsbridge for instance, we counted 9 two-toned Rolls Royce behemoths, 5 single-colored ones, one Rolls Royce SUV (ugly in my opinion), and countless S550 Mercedes (the best!), and at least 12 Tesla automobiles, all in less than five minutes. I would hate to live in a place like that, seeing it on a daily basis from my perch on a double-decker, my envy would lead to depression for sure.

One has to be super-rich to fully enjoy life there. Even Federico, who had always maintained that he would do any lowly job just to be able to live in London finally admitted that he would be miserable too. London will always be a fun place to visit, but as a place to reside? No, thanks.

One of my sisters came to visit from the suburbs whilst we were there, and that was great fun. Our paths had not crossed in a long time, and while we had hoped that we would be in Nigeria at the same time, it didn’t happen. Her visit was a couple of weeks after mine. Catching up with family is always a good thing.

She wasn’t super happy of course. It was a public holiday because of the jubilee. Her train had been very crowded and a journey that should have taken two hours at the most took over four and a half hours. She was just happy that she had chosen not to drive the whole way. I suspect had l not been her favorite sister, she wouldn’t have come! Haha…

The long weekend for the jubilee celebrations meant that most workers had Thursday and Friday off, so a lot of locals went away, or just stayed home and rested while the streets were flooded with us, visitors.

Since there are no more covid-related restrictions in the U.K, we saw very few people wearing masks. It was a bit weird at first, especially on public transport as we are still required to wear them in Valencia, but we soon got used to it, and yeah…we chucked the mask for the most part.

Another observation we made was that it was practically impossible to spend cash anywhere! My advice? Leave the cash at home and pay for everything with a card. We seemed to be only able to spend cash at big department stores. Everywhere else, (even the food market stalls) and we were screwed. It has become a thing, one that I’m not sure how l feel about.

So… when is the best time to visit London?

June, I say for the reasons listed above. I am a big fan of traveling off-season as there are tremendous savings associated with it, but it is also nice to enjoy a city at its best with June being the best time to travel to London. Have you been to London? and do you agree that June is the best time to visit London? What are your favorite things to do and to see? If not, would you like to visit this amazing city?

8 thoughts on “Best Time To Visit London, Plus The Jubilee”