A weekend in Edinburgh is barely enough to scratch the surface of this absolutely gorgeous city, but it is enough to see and enjoy the major highlights. Edinburgh surprised me in a good way, way more than l had anticipated. Our Scotland trip started out in nearby Glasgow and we had such a wonderful time there, a hard act to follow in my mind. Once on ground though, I realised why Edinburgh is a must-visit for so many people. Read on to find out why it should be on your list too.

Weekend in Edinburgh: Guide to the best

Edinburgh is a small and densely packed city. Edinburgh has been capital of Scotland since the 15th century. The one thing that strikes you immediately between Edinburgh and Glasgow is how compact it seems compared to the wider open spaces we saw in Glasgow. It’s hard to decide which city is better, I could live in either, but overall, I think Edinburgh might come out slightly ahead because of its city atmosphere.

How to get to Edinburgh:

Having flown into Glasgow, we simply took the 48 minute train ride from Glasgow to Edinburgh as outlined on a previous post. This seems to be a very popular thing to do as the train was full despite it being a weekday. The cost was just under ten pounds each way. For this reason alone, a lot of people visit both places when on a Scotland holiday, just like we did.

The Edinburgh airport serves over 14 million customers a year. A lot of the big airlines have Edinburgh as a destination. Lufthansa, Qatar and American Airlines all fly there. The airport is also a popular destination for the low cost airlines such as Ryanair and Easyjet. You can check for flights on sites such as Tripadvisor or Skyscanner for comparison and best prices.

Where to stay in Edinburgh:

For budget minded travellers, our friends recommend the Castle Rock Hostel. Perks of this hostel include awesome views of Edinburgh Castle, free WiFi, and a free tour of Edinburgh among other things. Breakfast is aa add-on that costs less than two pounds and the dorm prices are very reasonable. The prices are definitely reasonable and can see why our friends have visitors stay there.

The Lane boutique hotel was our choice of hotel. We however, ended up staying with said friends instead, so we didn’t need our reservation after all. I had chosen it for the location (we wanted to be close to the city center but not right in it so we could get much needed sleep), the lovely amenities and the Victorian character . There were also lots of restaurants close by. I did also consider the Radisson hotel on Royal Mile but l discounted it because it was just too right in the middle of the action for us. For those who like to be in the thick of things, it’s worth considering.

For true luxury, I guess you could consider the Balmoral hotel on Prince street. It looks so regal and majestic from the outside, I can only imagine what it must look like inside (we didn’t attempt it :-)).

As l said, the best part about the small size of Edinburgh is that you need not worry to much about what area to stay in. It is easy to walk or use the public system to get around. The city has a population of just under half a million and it makes you feel like if you lived there, you would know everyone soon enough. It felt that intimate.

It depends on where you’re coming from. Edinburgh is cheaper than London for instance. It is also cheaper than other countries in Europe such as Sweden and Denmark, two places that peeled us alive cost wise. Coming from a country like Hungary or Romania for instance, Edinburgh is expensive. Coming from America, it is almost a wash thanks to the continuing favorable exchange of the U,S dollar against the pound. We are at almost a 1:1 basis which is incredible when you think that just a few years ago, the dollar was only worth about 60 pence. Time to head for Edinburgh l hear you say!.

Best things to see in Edinburgh:

We used the hop-on hop-off bus to get our bearings and figure out the best places to visit, something we do a lot in new cities. Once we’d done the go around and marked off the must-visit places for us, we then got off at the right stops and purchased tickets to the specific Edinburgh attraction.

Easily the most famous icon of Edinburgh. The castle is built on Castle rock and is visible from pretty much anywhere in Edinburgh. It’s been a royal castle since the 12th century and was the royal residence until 1633. Since then, it’s been used more as military barracks. Edinburgh castle is the most famous attraction of Edinburgh and is worthy of a visit. The views from the top are definitely stunning as you can see in the first image up top.

We enjoyed seeing the royal jewels and the various rooms contained within the fortress walls. We both however preferred Stirling Castle and would recommend seeing that over this one if you had to choose one over the other due to time constraints. The history at Stirling Castle was more alive in my opinion. Plan on spending about two to three hours here to see everything (lots of time waiting for entry to the rooms).

A perfect destination for hikers and lovers of nature. Arthur’s seat is an extinct volcano. The views from the top l assume would be stunning and we saw people trekking up there. We however, did not as that does not interest us in the least. Part of Hollyrood Park, it is accessible from the Hollyrood Palace. Legend has it that the name comes from legends about King Arthur.

This is the official residence of the British monarch when in Scotland. We loved our visit there and you can find the full writeup on this palace of Holyrood post. Your weekend in Edinburgh should definitely include this gem.

The Royal Mile is the most famous part of the old town. A very steep street but worth visiting and walking to see the little souvenir shops, eateries and little tiny alleys. Always packed with people, it was one of my favorite spots. I didn’t even mind walking uphill (purposely not getting back on the bus after we saw Hollyroood Palace just so we could experience it).

Definitely one of my favourite experiences. This former royal yacht is now permanently berthed at the Ocean terminal in Leith not too far outside the city center . If you are not on the hop off tour, look for bus #22 or #35 going towards Leith  that will get you there from the centre. You can find the full post on the experience on this post.

A gorgeous setting for a monument to one of Scotland’s famous sons, namely the author Sir Walter Scott. Some of his most famous works include classics like “Ivanhoe” , “The Lady of the lake” and “The Talisman”. The monument (second largest in the world after one in Havana Cuba) is dark and moody, very Gothic in design. There are 288 steps to the top if you’re in the mood and you can see endless views from the top. Below Sir Walter’s statue (him and his dog), there are smaller statues of other Scottish writers and personalities, 93 total.

The Royal Gardens is a science center where they study different kinds of plant and how plant conservation. There are world renowned and you can take tours of the various green houses. The gardens free free to enter, but the glass house entry costs seven pounds. We wandered in the Psychic Garden because it was right next to Hollyrood Palace, but did not go to the green houses.

Modern art gallery located a few minutes walk from the Scott monument. We unfortunately ran out of time and did not get to see the museum on our weekend there. Surely, we need to rectify that on a future visit.

Located in parliament Square on the Royal Mile and has been there since the 14th century. St Giles is the patron saint of Edinburgh. He is also the saint of lepers and cripples and was beloved in the middle ages. The church is no longer Catholic, and has been other denominations of Christianity too. Now, it’s just Church of Scotland.

These are just a few of the best Edinburgh attractions of course. We really loved roaming the city. We had a really good workout by walking up to the Greyfriars Kirkyard cemetery (final resting place of notable Scots) from the Scottish Gallery. Boy, were we glad to find a pub for a pint!. Our time in Edinburgh left us wanting more.

How many days in Edinburgh is enough?

Our weekend was wonderful, but l felt we could have benefited from an extra day. I think three to four days would be a perfect amount of time to spend in Edinburgh to fully enjoy your stay. It’s an absolutely gorgeous city and l am looking forward to another visit, hopefully with an add on to close by cities.

Edinburgh has several festivals happening during the year. It’s therefore wise to check before you travel there as prices for hotels etc… would understandably be higher during those times. The two most popular ones are the Fringe Festival which takes place in August (25 days long) and is billed as the world’s largest art festival.

The other is the Jazz and Blues Festival which takes place yearly in July.

We didn’t really visit any fancy or memorable restaurants during our stay. We just ducked into places that were along the bus route, one of them a KFC :-).

Overall thoughts on our weekend in Edinburgh:

We absolutely loved it. We look forward to revisiting Edinburgh in the near future. It’s a place l could definitely picture myself living in. Once again, the cold would do me in though. I am over that extreme weather living. 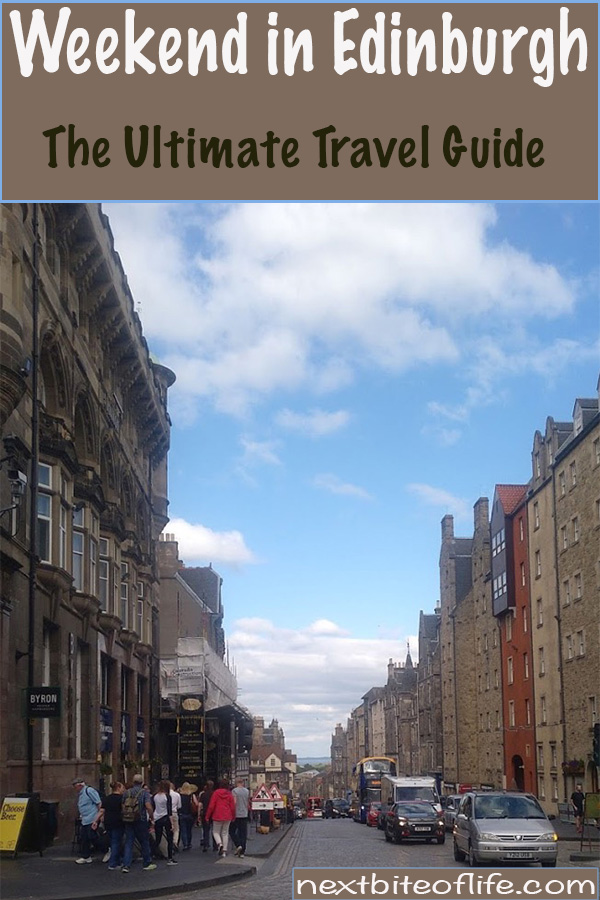 Have you been to Edinburgh? If yes, did you enjoy your visit? What was your favorite attraction? Would you recommend an Edinburgh visit?