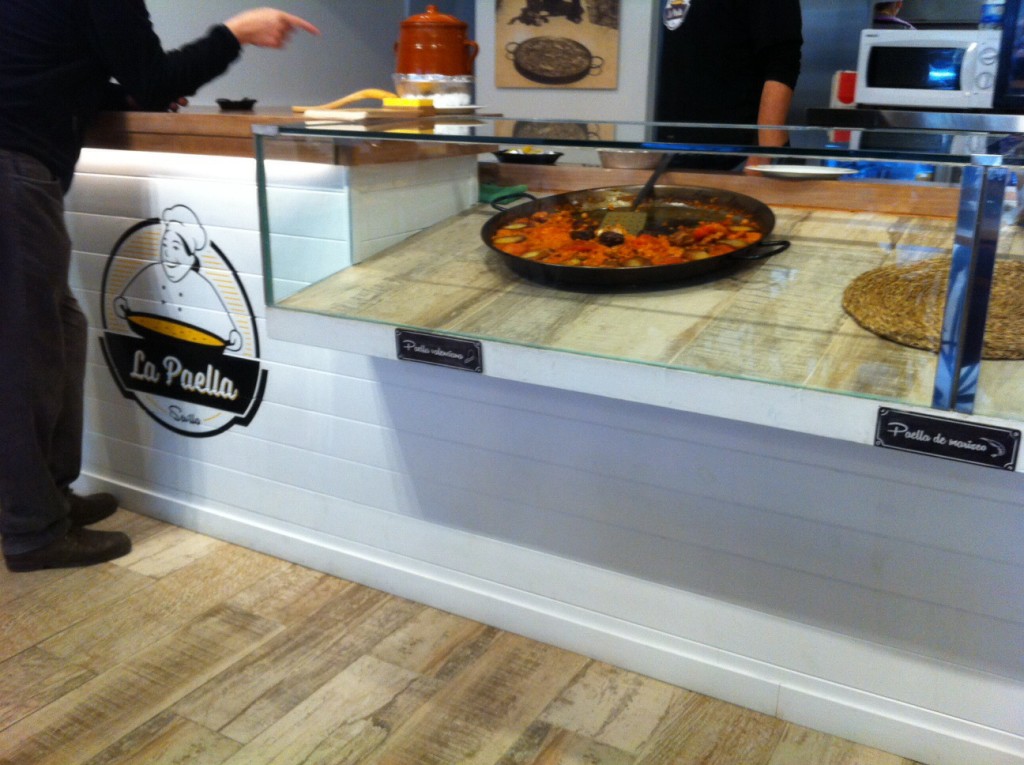 Best paella in Seville is at La Paella Sevilla.

Affiliate links are contained in this post. If you purchase through our links, we will make a small referral commission at no extra cost to you. 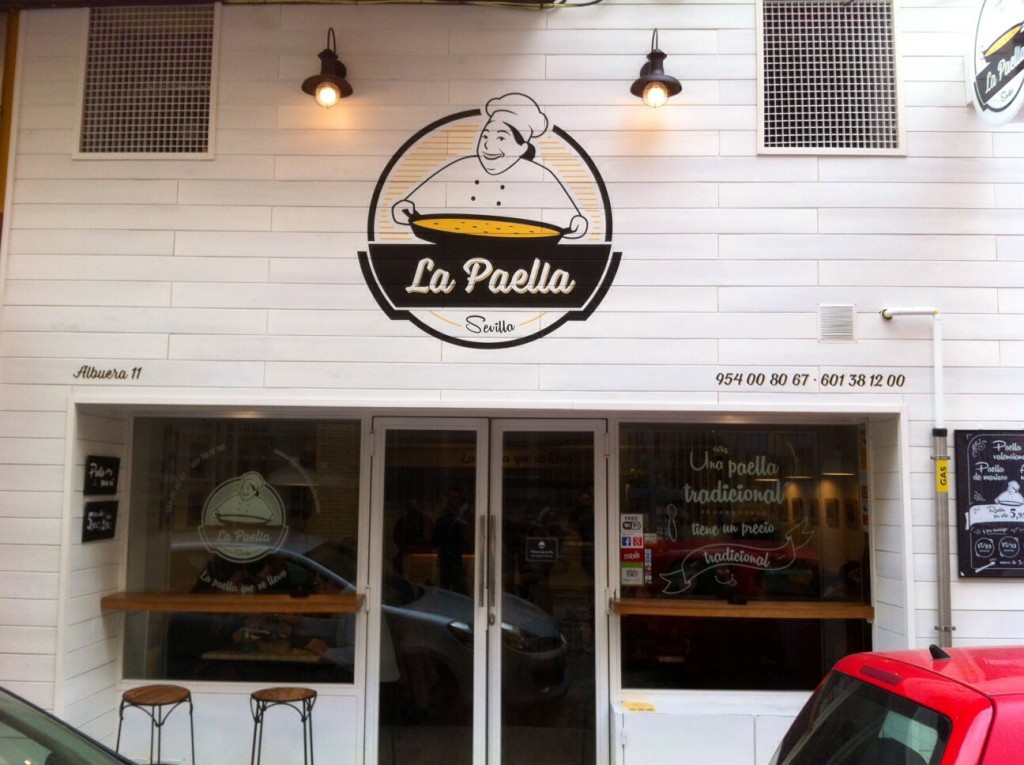 La Paella has the best paella in Seville in our opinion. Simple and good and they only serve paella.

I know what you are thinking. Seville? For paella? Is that possible? I thought Valencia was the only place to get good paella? I assure you that it is quite possible, my friends :-). Absolutely, freaking amazing paella, done the right way. We are in Seville for a long weekend, and are absolutely loving it. The city is what l can only define as insanely beautiful. In my next post, l will have pictures of the city, but for now, you just have to make do with the paella :-). I’m just sorry l only had my cell phone on me.

Where to eat paella in Seville: 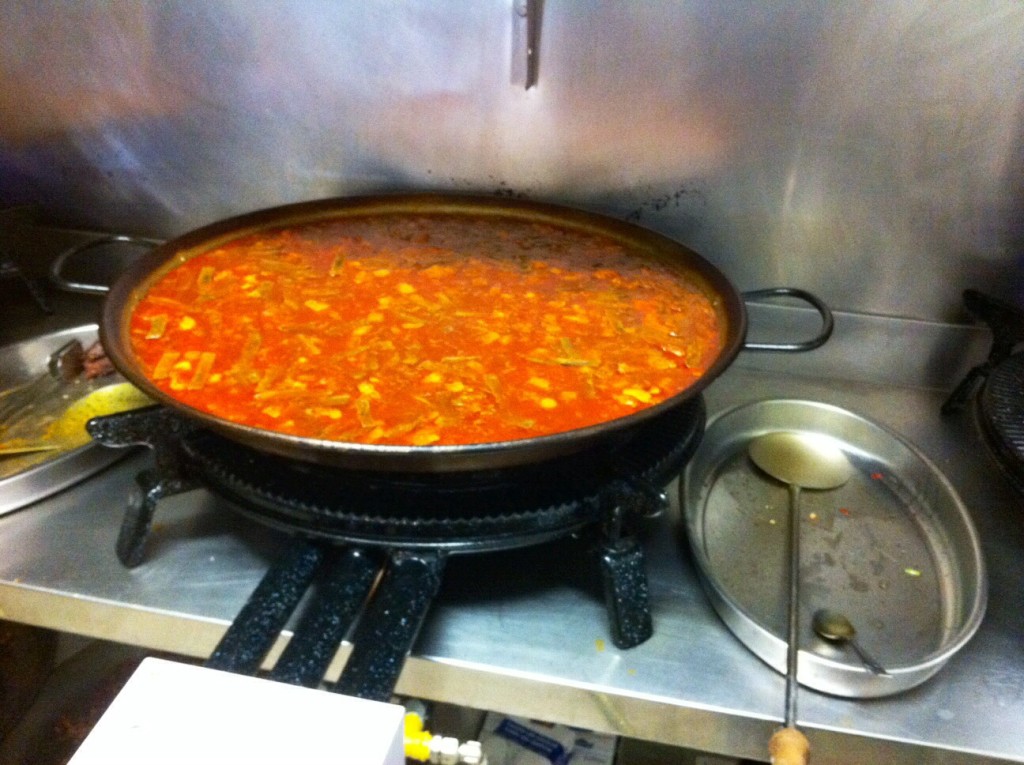 Yummy traditional paella cooking. It’s worth the wait for the best paella in Seville.

If you’re thinking about moving to Spain and want to know the steps, you can purchase your copy of our latest Spain eBook now on Amazon. 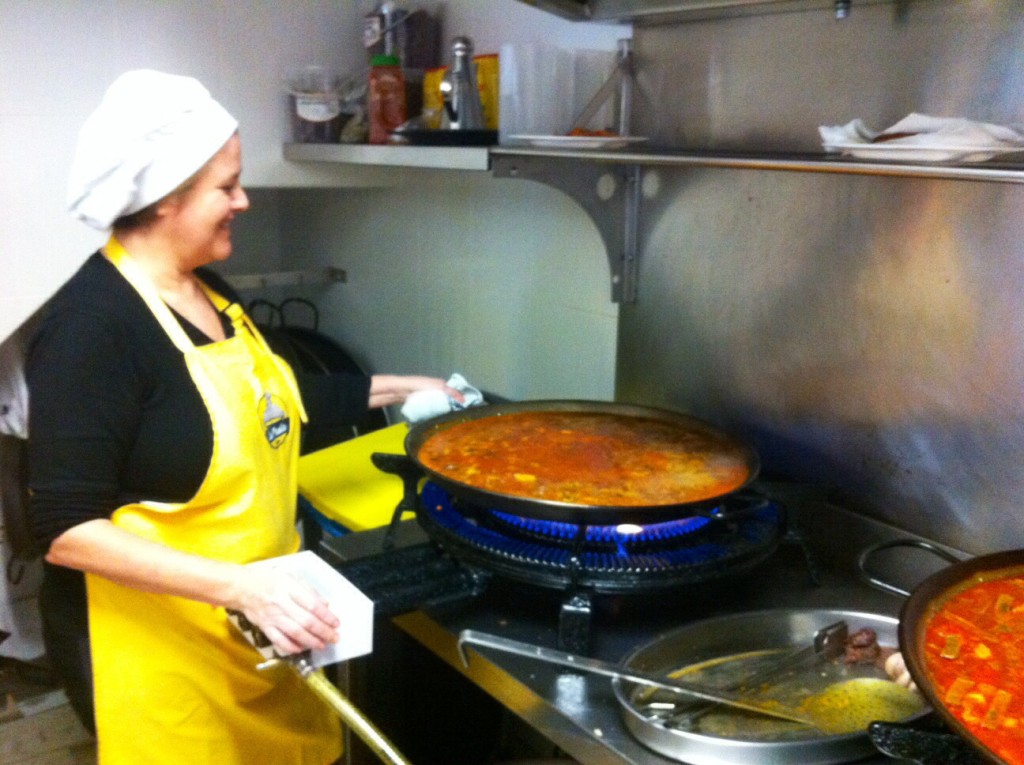 They let me in the kitchen to snap a pic of this wonderful and friendly lady cooking the paella at La Paella Sevilla.

We had walked around the center of Seville for several hours because our friends were eager to show off the city. The center does remind me of Malaga’s but on a much larger scale. The streets are just as narrow, and cars are not allowed inside the center, save for taxis, and even they can only go so far before you have to get out and walk the rest, that is how narrow the streets are.

We were hungry, and mentioned trying to find some good paella. We were informed that it was not a Sevillano thing, but luckily, they knew of a little paella place owned by people from Valencia. This place is called La Paella Seville. It is located in the center. They only serve the best paella in Seville :-).

We got to La Paella early, and they were still making a new batch as we got there soon after they opened. We booked a table and walked around some more, because the first batch would not be ready for about 30 minutes. It was a good thing we reserved space. It was full by the time we came back, and several people that stopped by afterwards could not find seats and most left. 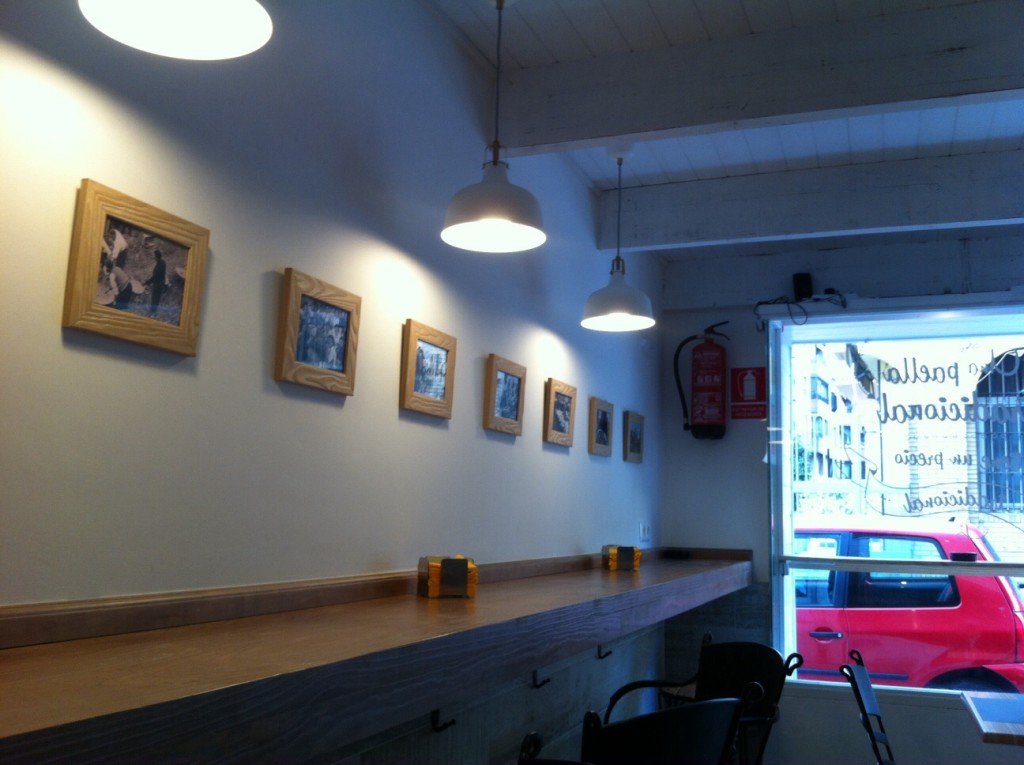 The interior is plain and quaint, and the prices reflect it. They serve the best paella in Seville at great prices. 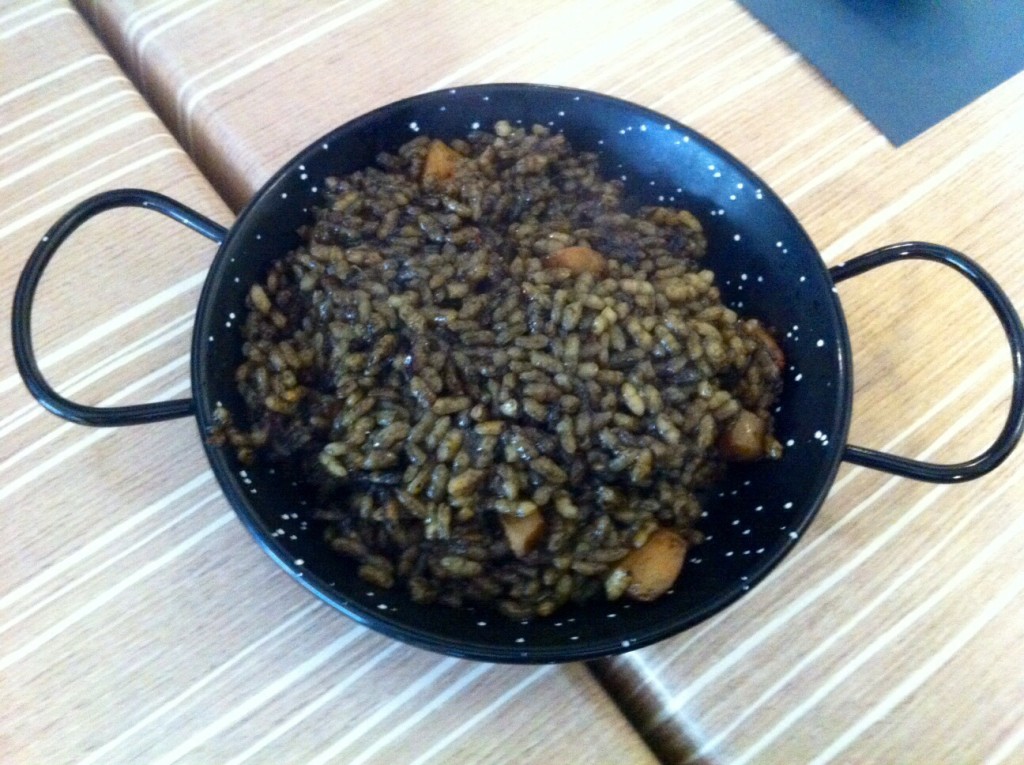 Tapas size of sepia arroz negro paella. Absolutely delicious at one of the best paella restaurants in Seville.

Fideua is Catalan, so you will see more of it in Barcelona for instance. Fideua is a version of paella that uses fideos pasta (looks like cut up spaghetti), prawns, tomatoes, squid and spicy sweet peppers topped up with garlic and olive oil sauce. It is absolutely delicious and if you get a chance to try some, take it.

Arroz a Banda is a rice mixture made with fish stock and alioli (garlic and olive oil mixture). It was originated by fishermen in the Alicante region of Valencia. Monkfish, hake and other similar fish were used to make it. I’ve never had it so l can’t speak to it’s goodness but l admit it doesn’t interest me.

Our paella selection was good, make that great. It was a lot too, it cost just €6 for the big plate, and €3.50  for the tapas size. All three were so good.  It was that fantastic. I was also proud that l was able to order by myself, and even contribute a bit to the conversation….in Spanish, thanks to my favorite new app, utalk. 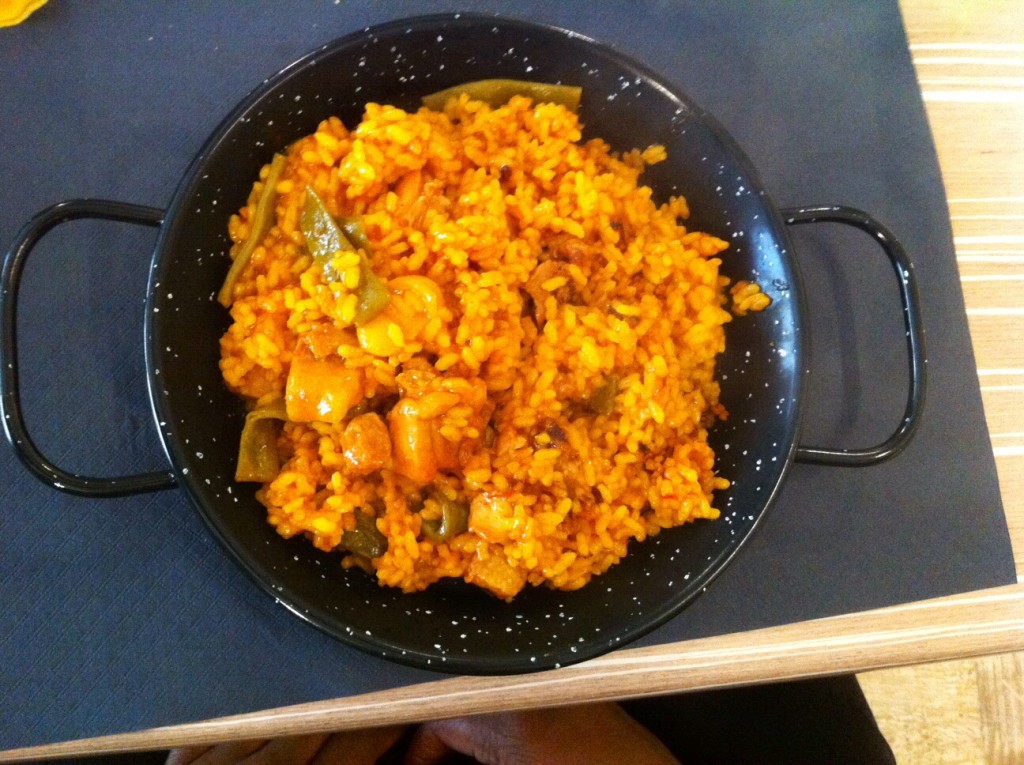 Protect your trip with travel insurance. 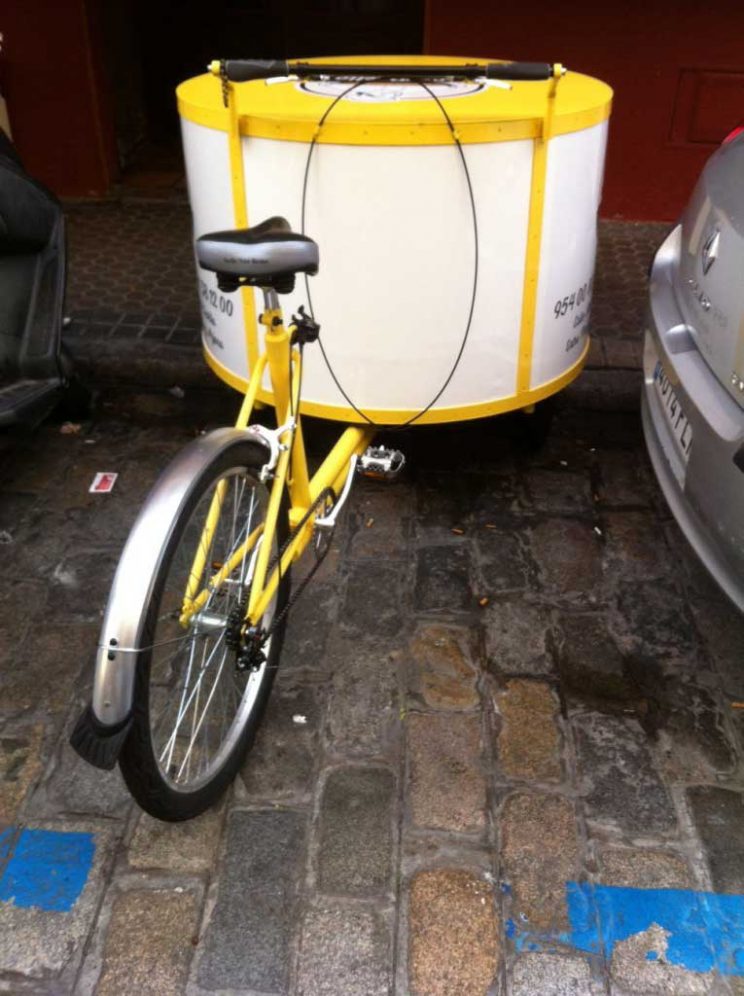 Even a big old delivery bike for the best paella restaurant in Seville, bar none!

If you find yourself in Seville, you have to try this place. It has the tastiest and best paella in Seville and worth the wait if you have to. If you wish to make your own paella, Valencia style, here is how to make paella from a local. It’s not everyday one gets to experience the authentic Spanish paella recipe.  l can’t imagine it could be any better than this. A plate of paella,  a pint of the local beer, Cruzcampo, and all is well with the world.

After having lived in both Sevilla and Valencia and eating loads of paella, I can say without the shadow of a doubt that the paella at La Paella rivals any that we have eaten in Valencia. I don’t know if it’s because the owners are from the Valencia region, or they have just perfected the art of making it. The lucky recipient is the customer who gets to eat this wonderful national dish of Spain. Remember though, Paella is only eaten for lunch by Spaniards so you don’t want to stick out like a sore thumb.

What stood out most to me was the excellent attitudes of the workers. They were friendly and accommodating, allowing us to take a photo and showing us the process. I think in some way, that does make the experience more enjoyable and part of the reason we consider it the best paella in Sevilla. Try it, you won’t be disappointed. 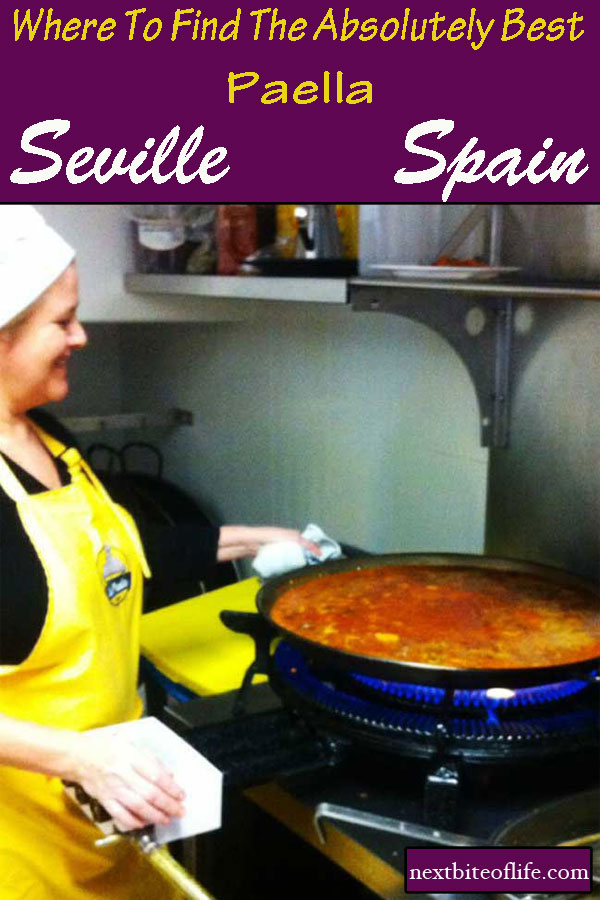 Are you a paella lover? Would you eat Paella in Seville, or would you be a purist, and have it only in Valencia? If you’re looking for the best paella in Seville, you now know where to go :-).