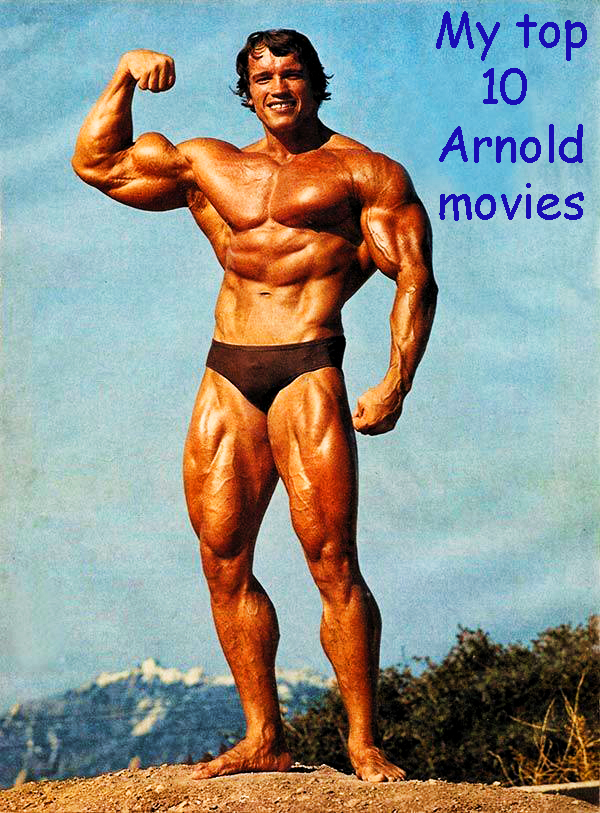 This is a slight departure from the Fab Friday Format. I had thought about doing this as an addition to the fab Friday find as far back as a year ago. I used to love reading my friend, Mike blog. He would  have this top ten list every so often, and it was always fun to see what everyone considered great roles. I always found that my tastes differed slightly from his. Good thing right? different tastes for all :-).

I am therefore appropriating it, as l had warned him almost a year ago :-). In honor of the new Terminator Genisys movie (which looks awesome by the way), my first top ten list of Arnold Schwarzenegger movies.

Go ahead and laugh! I’ll wait for you to finish :-). You see, l know what you’re thinking. “Who could possibly say aloud that they love Arnuld??? I can! I do..and l will proclaim it from the highest mountains!!! You know what makes Arnold so great? He is totally in on the joke. He knows he is no Shakespearean actor, and he doesn’t claim to be one. He acts as if he is winking at you, saying..”yeah.. l know..but it’s funny..right?”.

The answer is often a resounding yes. I find it even more so in the roles he has played as of late, in his twilight years. I as the viewer, am always entertained by him. Yes, l know his personal life and political beliefs etc. cloud people’s judgement of him, but there is no denying that he delivers on screen. Pain to the bad guys!!! Without further ado, here are my favorite ten movies from his very many.

It was really hard narrowing it down. I wanted to cheat for instance and lump the Terminator series as one, but l think that would be fudging just a bit. Each movie has to stand on his merit. They are in no particular order.

Arnold only had a total of 19 lines in the movie, and he had originally wanted to play the part of Kyle Reese. The director James Cameron talked him out of it, and promised he would make the Terminator the hero, no matter how many people he killed. Thank goodness, I would hate to think of how it would have turned out otherwise. I love this film.

I have seen this movie at least 6 times. Arnold plays a small town sheriff who has to stop an escaped drug mafioso. It builds up to a very satisfying ending. He shows the sleek FBI guys how to take care of business, Arnold style!

Gabriel Cortez: You f*cked up my car!

Sheriff: You f*cked up my day off

I really had a hard time deciding which one l liked better as far as his one liners! Part 2 or part 3. The story line was better in part 2, but his lines were better in the last one. I know it’s an ensemble movie, but l like it.

Favorite Quote: (one of my many)

Stonebanks: I’m too old for this shit.

Trench: We’re all too old for this shit.

Terminator 3, Rise of the Machines:

This movie did not get the love it deserved at the time of it’s release. This is one of those that l could watch again and again. Not only was the new terminator a badass chick, but Arnold had amazing lines.

This is so awesome, and it has provided me with unlimited chuckles. Katherine Brewster is freaking out in the back. She has been kidnapped, been told that her fiance was dead, her father was responsible for the end of the world, was due to die in like an hour, and was she was married to John Connor in the future! :-). Yeah..relax…

What’s not to love about this movie. It had Arnold, Jesse the Body, Carl Weathers etc..etc.. fighting an alien..

If it bleeds, we can kill it.

I don’t think l need to say much about this movie as l think everybody on earth saw it. So many great lines. Those guns on Linda Hamilton. Every girl wanted those cool awesome sun glasses that she had one. She was ripped! and Arnold was in fine form. Excellent movie. The best of the three.

Come with me if you want to live!

Arnold has to go undercover to protect a single mom and her son from the psychopath ex- husband. Funny movie. Definitely one of the best of Arnold Schwarzenegger!

James Caan is the bad guy, and does a god job. Vanessa Williams is the sexy witness that needs to be protected. Hilarious in some parts. I really, really liked this movie. I loved the funny bit with the Union and the Mafioso guys.

Arnold and Danny Devito play twins separated at birth. Just that premise alone is hilarious. I remember when it came out. I was reluctant to watch it because it just seemed so dumb, but you know what? It was pretty funny and they played off each other well. I think l sniffled in the end, and still get a lump in throat when l watch it. You know, when their mom interacts with them…It goes to show you, no matter how big you are, you will always be mama’s boy/girl.

Julius: My name is Julius, and l am your twin brother.

Vincent: Oh, obviously! The moment l sat down, l thought l was looking into a mirror.

How cute was Alyssa Milano as his daughter in this movie? Yeah! They made the mistake of kidnapping his daughter. A whole lot of deaths, as nothing stands in the way of his getting back his little girl.

Matrix: Don’t disturb my friend. He’s dead tired (after killing the guy on the plane)

How do you like my list? Did l miss any of his other movies that you feel should have been included? Are any of these on your Arnold list of favorites or do you not care for action movies at all? What do you think of this addition to the Fab Friday Find format? Feel free to add other actors and actresses that we should “top list” in the future.