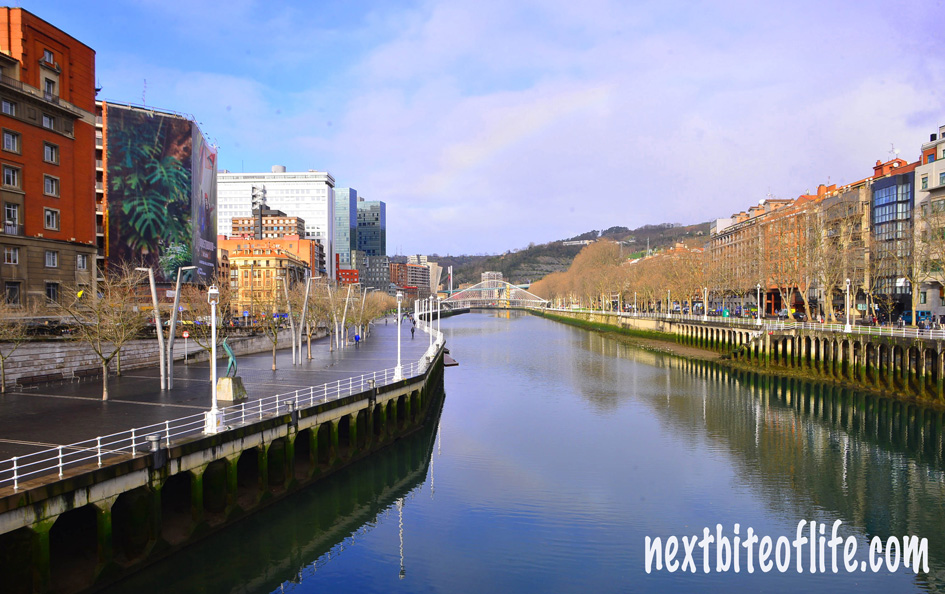 Bilbao is an absolutely charming city in the Basque country of Spain. Located a small distance from the bay of Biscay coast, its popularity has skyrocketed as a must visit destination in the country, thanks to the architectural wonder that is the Guggenheim. There are definitely other magnificent things to see and do in Bilbao though. Here is a guide to the best things to do in Bilbao.

The city took me by surprise. I knew l would like it, but l ended up loving it. In a lot of ways, it reminded me of Valencia. Pretty sure l would enjoy living in the city, with its gorgeous water views, wide, clean streets and wonderful cuisine. It will definitely make you want to visit Bilbao.

Top things to do in Bilbao:

This stunning museum made from titanium was designed by architect Frank Gehry and it was opened in 1997. This is perhaps what singlehandedly brought the city of Bilbao on the tourism radar. Having seen it, I can definitely see the attraction.
This modern and contemporary art museum is a must visit in Bilbao. I advise buying your tickets online like we did so you can enter through the special line without waiting. Ticket price was €13 per adult and two euros more if you buy at the counter. You can select from available entry times.
I have to admit that neither one of us is a fan of art where one has to guess what you’re looking at. Once we cleared the ground floor though, I was thrilled with the other forms of art, especially their collection of  impressionist artists like Monet and van Gogh.
Don’t miss the humongous “dog” made entirely of live flowers that sits on the grounds and was designed by artist Jeffrey Koons.

This is the old town of Bilbao that is also called “7 Calles” by the locals, reason being that the area is made up of seven narrow little streets that are some of the oldest in Bilbao. It is believed to have been a resting place on the  Santiago de Compostela trail. Now it’s a vibrant little section of town filled with shops, restaurants and plenty of cafes.
Some of these stores sell “santiaguitos” which are marshmallow sweets blessed on the day of St Blas and are supposed to heal what ails you :-).

Famous main square right in the heart of old town. This is one of the main places to come for pintxos. What are pintxos you ask?
A pintxo is a small snack that are found in bars in the north of Spain mostly. It’s basically a slice of hard bread that is topped with different things from salmon to eggs, potatoes. The limitation seems to be the imagination. The concoction is held together by a toothpick or similar. Pincho is a spike. My jaws ached after a while from all that hard bread because they are so tempting, so beware if you have dental or jaw problems like l do.
All four sides of this neoclassical architectural wonder that took 65 years to build and has been standing since 1851, are lined with an endless number of pintxo bars and cafes. It’s a fantastic place to people watch, especially when the weather is nice and the seats outside on the terraces are occupied.
On Sundays, the plaza is transformed into a flea market where you can shop for everything from clothes to vinyl records under the arch lined alcoves.

Also located in the Casco Viejo is this museum that houses fossils roughly 430,000 years! All traces of the past history of the Basque region are housed here. Statues, fortified villages models and Roman rule life are just some of the artifacts that can be found there.

A gorgeous building on the waterfront. The La Ribera market is the largest fresh food market in Europe and has a Guinness Book of World Records recognition in 1990 to prove it. I was a bit shocked as l somehow mistakenly thought the Central market in Valencia was the biggest one.
Spread out on three floors and about 10,000 square meters, you can find fresh meat, cheese and other delicacies here. The bottom floor is completely dedicated to pintxos. Plenty of seating and cocktails while you eat and people watch. We also found the prices slightly cheaper here overall and the quality superb.

The Grand Via de Don Diego Lopez de Haro IV (quite a mouthful isn’t it?) is the commercial and financial district of Bilbao, and is the main avenue of the city. In the El Ensanche district, it was annexed to Bilbao in 1870 There are plenty of high end shops alsong the immensely wide boulevard, as well as some of the most stupendous head offices of banks, such as BBVA. This Gran Via rivals any of the biggies in my opinion in its beauty. Going off the main streets, you can find plenty of places to eat. Amazing place to do your Bilbao shopping with the elite.

This bridge looked familiar to me on sight and I indeed recognized on sight as a Santiago Calatrava designed bridge. Reason being that he also designed the City of Arts and Sciences in Valencia. Score one for me!
The Zubizuri bridge connects the left and right sides of the Nervión river. The bridge was opened in 1997 and we used it a lot during our stay as it was visible from our hotel room and made getting to Guggenheim for example a few minutes walk.
Zubizuri means “white bridge” in the Eusekera Basque language. Apparently, it was built with clear glass underfoot so people were able to see the river as they walked across. The city eventually put sturdy non slip carpet over the surface because too many people were slipping when it rained. Thank God as l don’t think l would have liked it all clear. I didn’t even move close to the very edge as it’s still see through.

A great way to get amazing views of the city. The funicular runs every 15 minutes from the plaza del funicular and climbs up to Mount Artxanda. It costs €3.50 for a round trip ticket. We did not go on it though.

This Catholic church built in 1756 is dedicated to Saint Nicholas, the patron saint of sailors and is located along the river and close to the old town. Baroque design, with two bell towers (an uncommon thing in Spain because a lot of them, like in Malaga, have just one. They all seem to run out of money before completion).

For any football (soccer) lover, seeing this stadium is a treat, and one that we were happy to see. We didn’t see the interior, but it is impressive in size from the outside for such a smaller city. A newer stadium replaced the old one in 2013 and has a capacity of about 53,000 people.

Hotels in Bilbao: Where to stay in Bilbao

We stayed at the boutique hotel Bilbao Plaza right along the river. It was central. We loved the big room and the great views. We can highly recommend it, especially for its central location. less than a mile from the Guggenheim, a few minutes walk to the old town and to Gran Via. Plenty of shops and cafes to eat at. A great find and the price (roughly $55/night converted) was great too.

Use this search box to look for your accommodation in Bilbao:


Eat and Drink in Bilbao:

While the city of Bilbao is known for pintxos and more pintxos, there is plenty of other food to eat, including fresh seafood and good hearty food like tripe, bacalao and suckling pig, right along with the steak, and of course plenty of patatas.

Thoughts of Bilbao: Is Bilbao worth visiting?

Bilbao is an absolutely amazing city, one that should be considered as part of any Spain itinerary. As said before, I could live here..but.. haha! there’s always a but isn’t there? For me, it would be the cold weather in the winter time.
The other thing that would stop me is the language problems. The street signs are all in Eusekera and Castilian. Truthfully, I can understand why a lot of the people don’t care to learn Spanish because it really is a whole other language. Reminds me very much of Maltese, so many x’s and q’s. They could have been speaking in Chinese for all l understood :-).
I would definitely like to go back for another visit. Even though it’s a small city, it doesn’t feel like it. There is plenty to do and see in Bilbao, so go visit.
Get your free travel insurance quote
Save it for later: 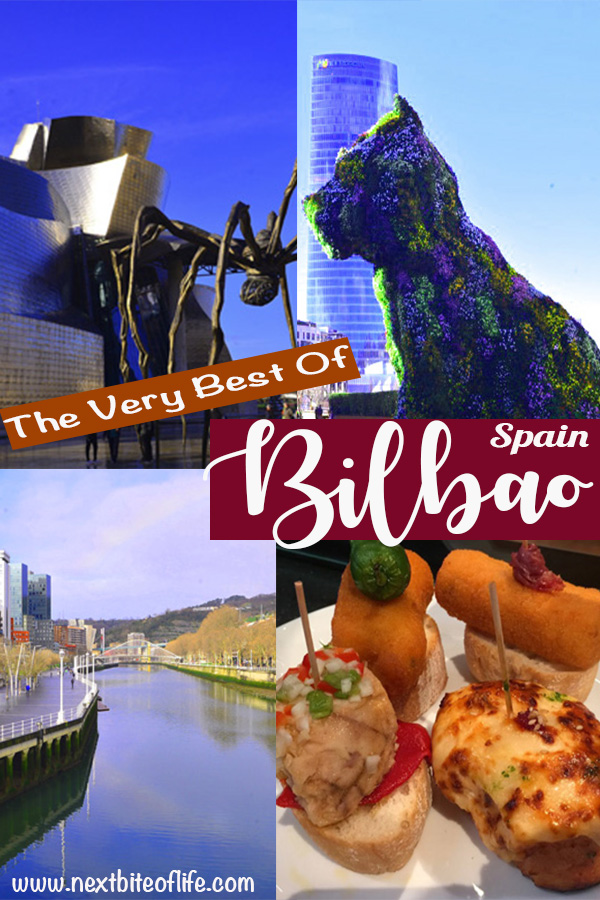 Have you been to Bilbao? If yes, did you enjoy your visit? Do you agree it’s a lovely place to visit? If not, would you care to visit?
[the_ad id=”13768″]
Shares