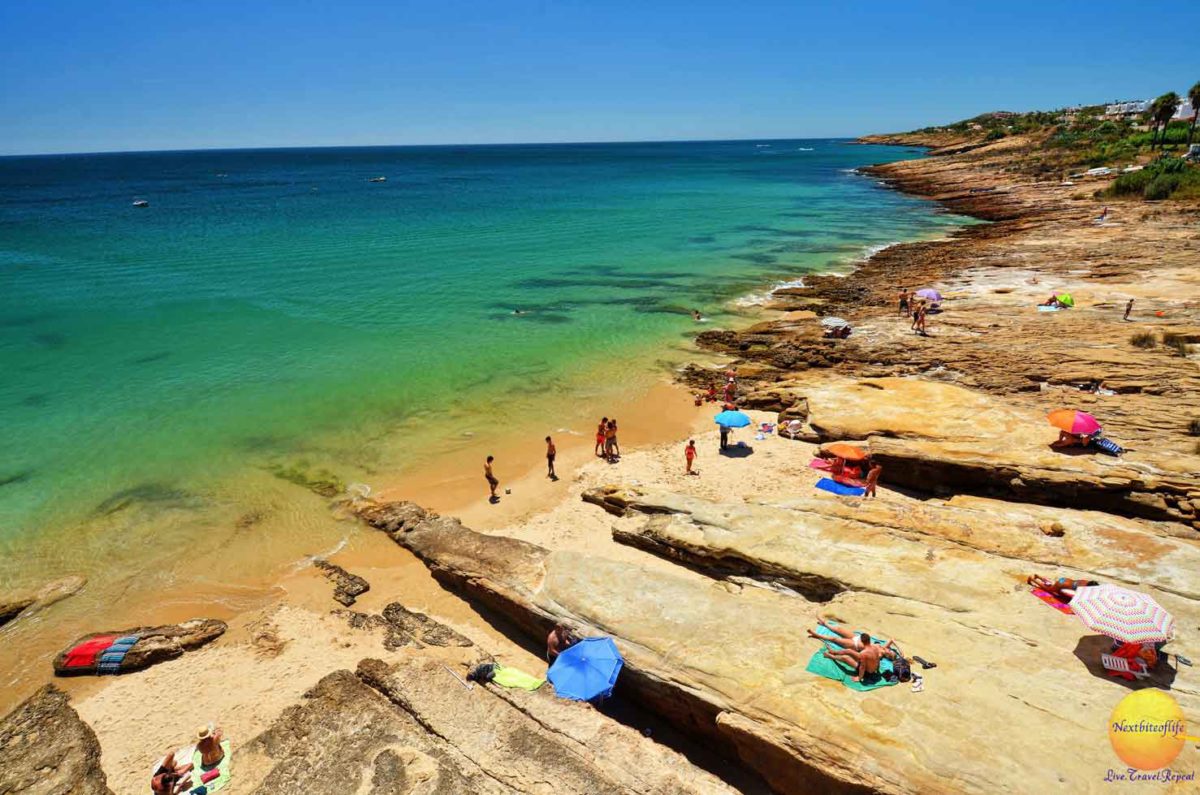 Lagos Portugal is pretty impressive. We finally had a chance to visit this summer thanks to the fact that our house  sitters had ten days free between sits and we spontaneously decided to extend our Madrid-Stockholm-Rome-Bologna trip. No wonder we’ve been nesting since we got back. We were gone a total of thirty-one days!, and I’m proud to say with just carry-on luggage too. Here’s how to experience a most relaxing vacation in this popular destination of the Algarve. 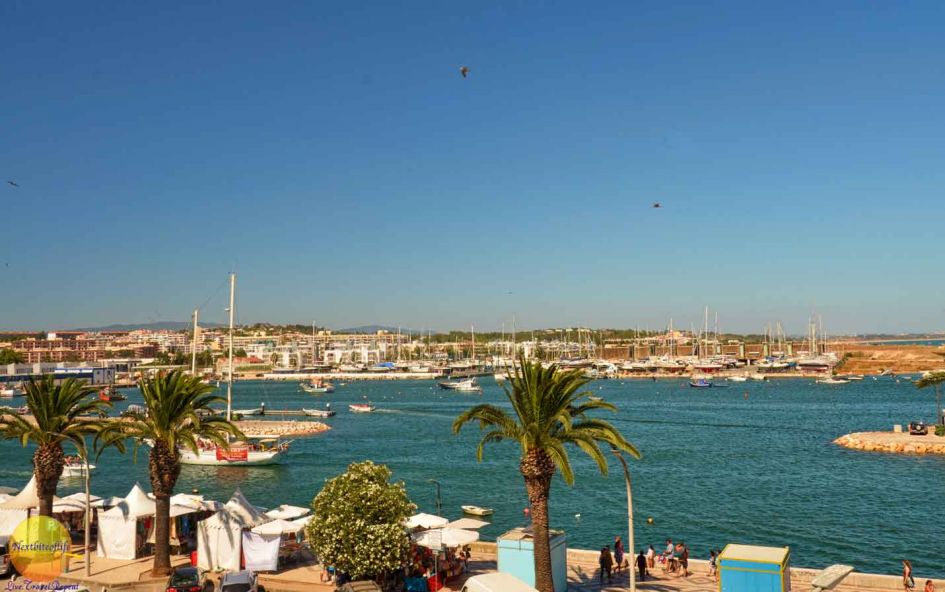 Your stress levels go way down with this view! This  view is  from the old center of Lagos Portugal marina.

We have found in the after some years of blogging, a tight-knit community of people who are warm and very friendly. We have had the pleasure of meeting online friends in the past, such as Jed and his family in Rome and Victoria and her family when they visited Seville on their holiday. We had the good fortune to connect with Anita and her husband Richard online last year.

She had somehow found the blog online. We had something in common. We had both been pharmacists in our working days. Their blog no particular place to go is one of my favorites. I enjoy traveling virtually with them. You might remember me interviewing them on a previous podcast. They had been permanent nomads for almost four years, starting off in Latin America. They have however settled in Lagos for the foreseeable future. 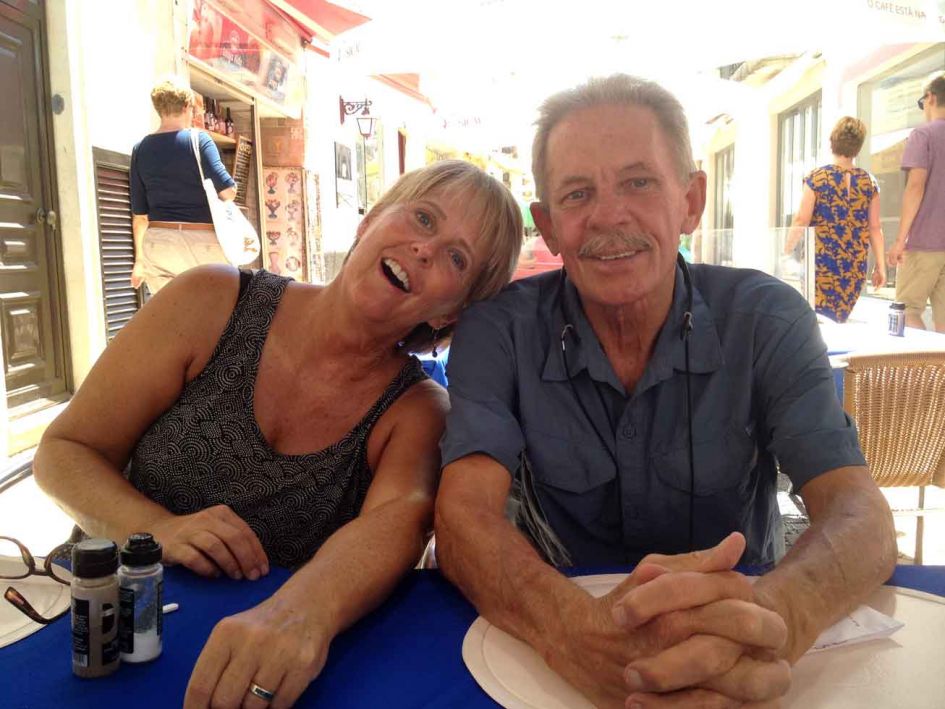 Ways to have an awesome vacation in Lagos? (Lagos Portugal Things To Do) 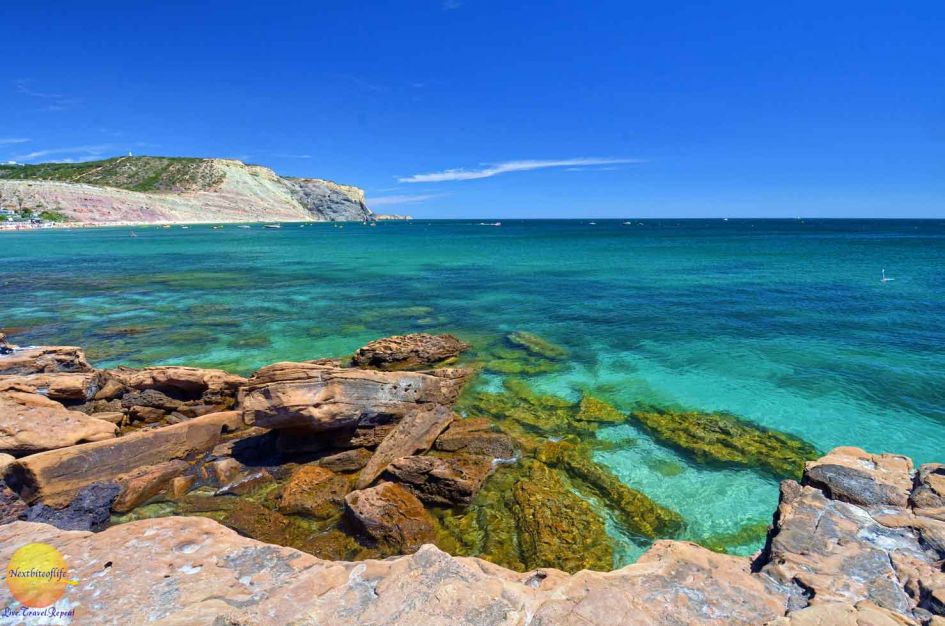 What to do in Lagos Portugal? Chceck out the Lagos Portugal beaches are stunning of course..right?. Find yourself a rocky beach and enjoy the sun.

It was like meeting old friends when we finally came face to face.  They were the most gracious hosts and showed us an amazing time. We stayed with them during our time in Lagos. We spent the days chilling on their balcony, cooking, checking out the downtown area and sampling the local food. I couldn’t have designed a better way to enjoy this laid back town that is insanely popular with tourists, especially the British. We took it easy for a lot of the time because it soothes your soul. 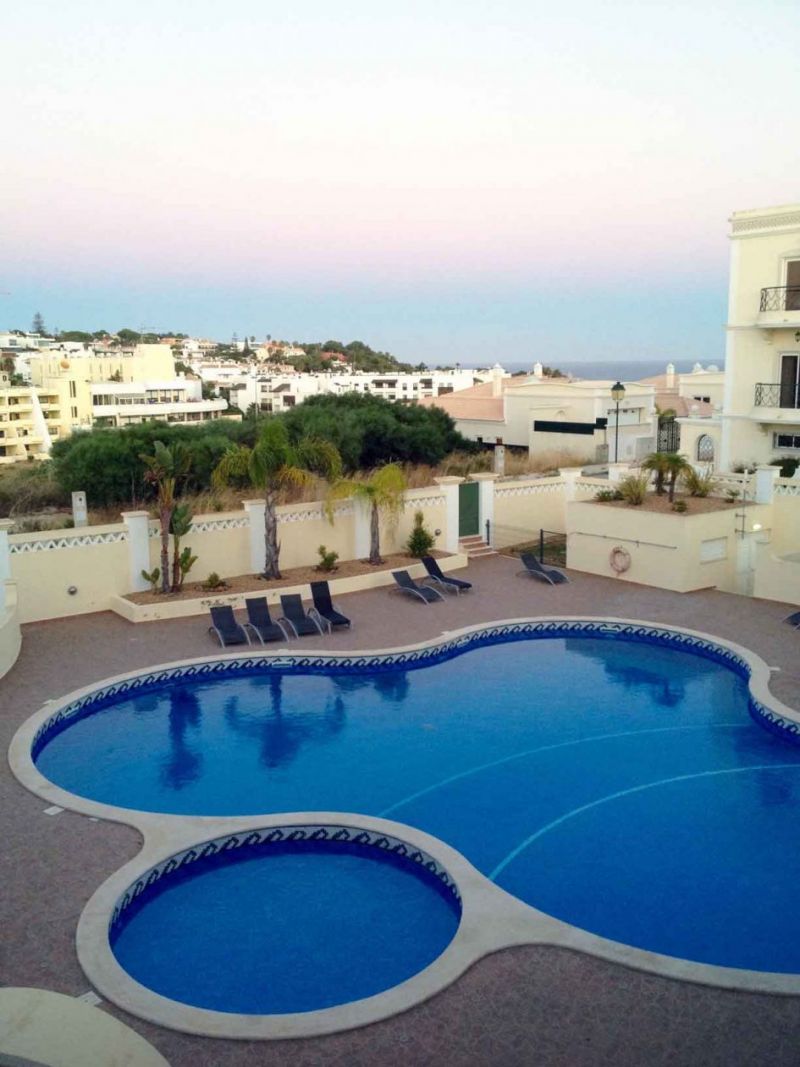 The view from their balcony in Lagos Portugal. Most buildings have big pools like this for the vacationers. The beach was a ten minute walk.

There is a pulsating Lagos Portugal nightlife for the youngsters. Lots of clubs and bars because Lagos has become a top draw for expats and families on holiday, especially from the U.K, but more and more people from the Americas as well now. If shopping is your thing, there are plenty of big name stores in the center as well as traders selling handmade items all along the beach all along the coastline. Surprisingly, most are not too expensive either when you consider it is tourist focused.

Where to stay in Lagos Portugal:

Our friends usually have visiting friends and relatives stay at the Hotel Marina Rio for the location, free breakfast and rooftop pool among other amenities.

There are also plenty of Lagos Portugal apartment summer rentals. Expect to pay a premium in the summer time.  There are plenty of luxury Boutique hotels and flat rentals in the Algarve Lagos area on AirBnB (first time users can get some $ off their stay with this code) or Flipkey, a popular site with the Brits. Most people spend their days at the beach or hanging out at the building community pools.

As an alternative, you can  search for Lagos Portugal accommodation .

The Old Center in Lagos, Algarve: What to do in Lagos 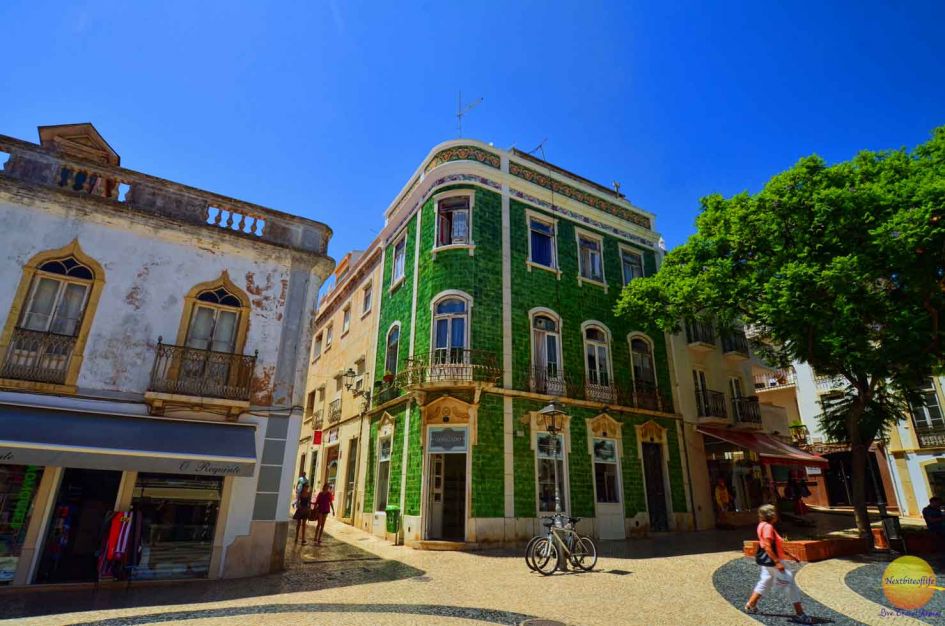 Has to be an symbol of Lagos Portugal. Love this green building :-). One of the many fun things to do in Lagos is walking around and checking out the colorful buildings with the Portuguese azulejo tiles. 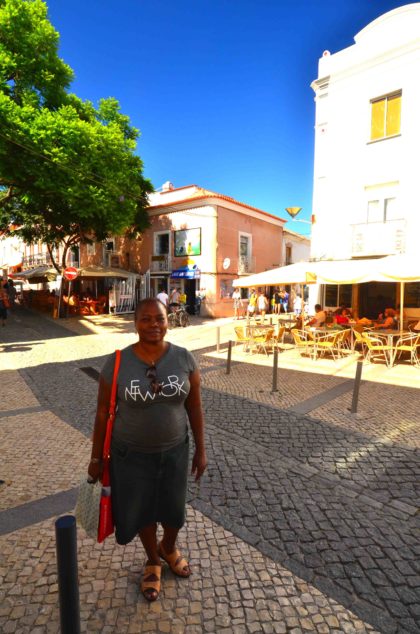 Bought a pair of cork shoe sandals in Algarve Lagos. I couldn’t wait to wear them. 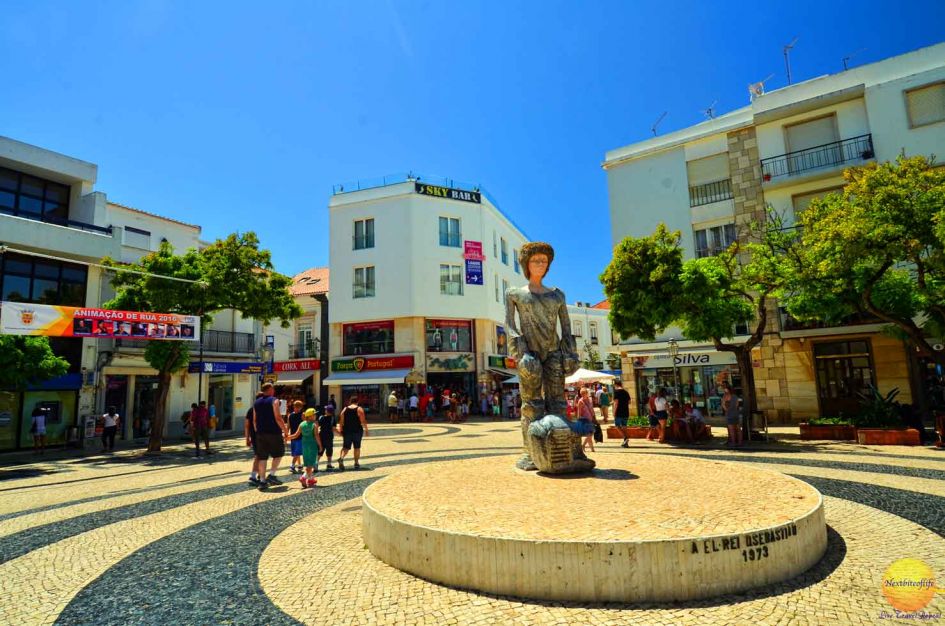 Lagos Portugal old center. Lots of bars like that one. The Sky Bar is a good way to get a taste of Algarve Lagos nightlife. Hopefully this will be just the first of our many Lagos holidays. 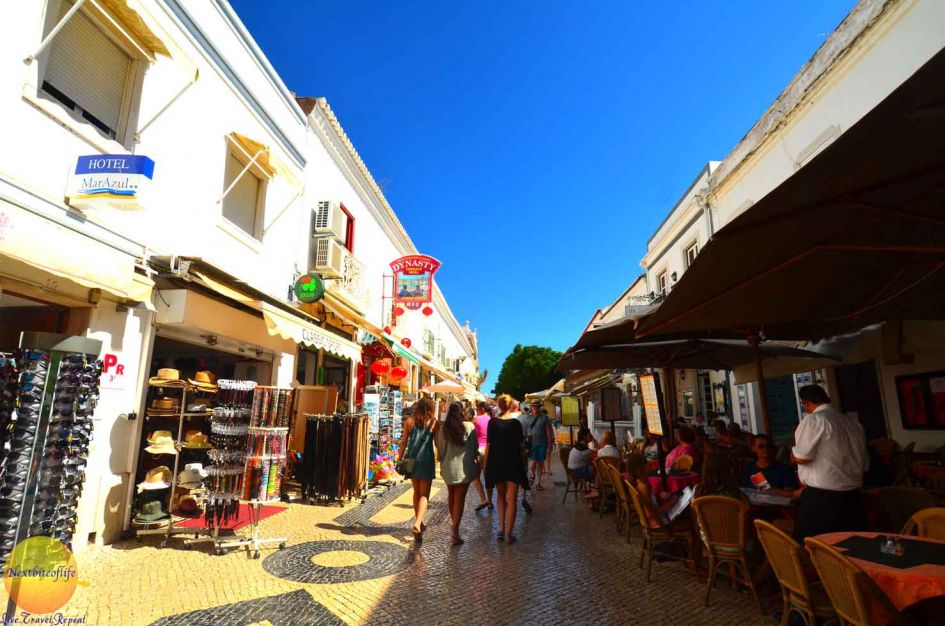 Algarve area of Portugal has lots of quite and quaint shops and restaurants.

We had another reason for visiting. Our lease will be up in less than six months and we have been discussing our next home base. Portugal being on the short list, we took the opportunity to check it out. Despite the fact that we liked Lagos a lot, we had more of an affinity for Lisbon, Porto even more so. We also found Portugal on the whole to be a bit more expensive than the south of Spain.

More like Barcelona prices, but l guess it’s to be expected as those are popular tourist destinations. Perhaps the lesser known parts would be cheaper. Ultimately though, we have decided to stay in Spain, even though we’re not sure exactly where. Somewhere closer to the water, so the research continues. 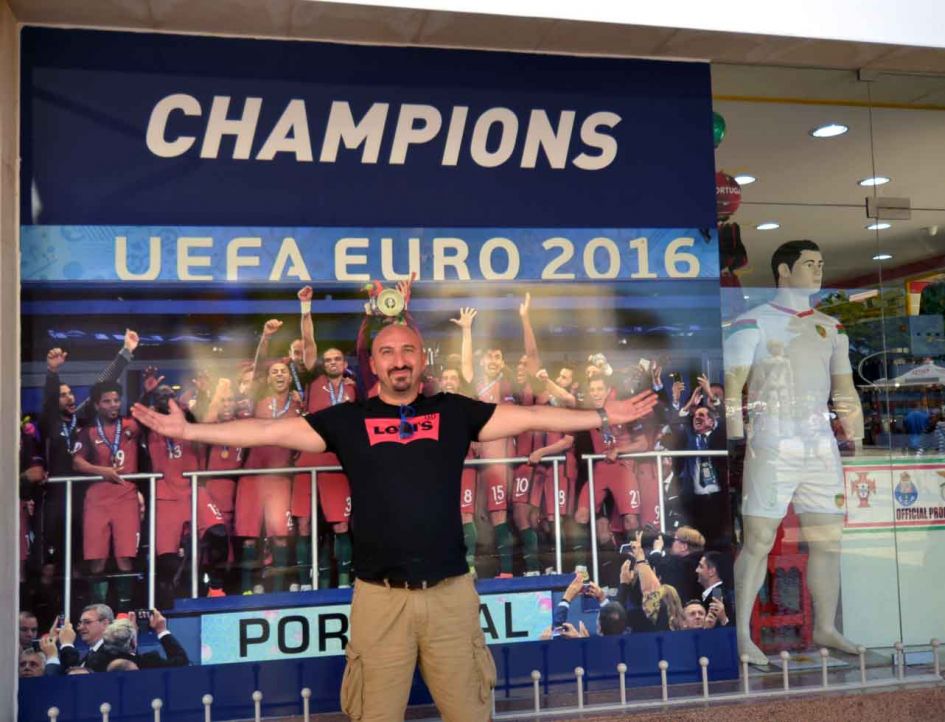 Algarve Lagos shopping. Anything that has to do with soccer, he likes so not only did we have to shop here, he had to pose :-) 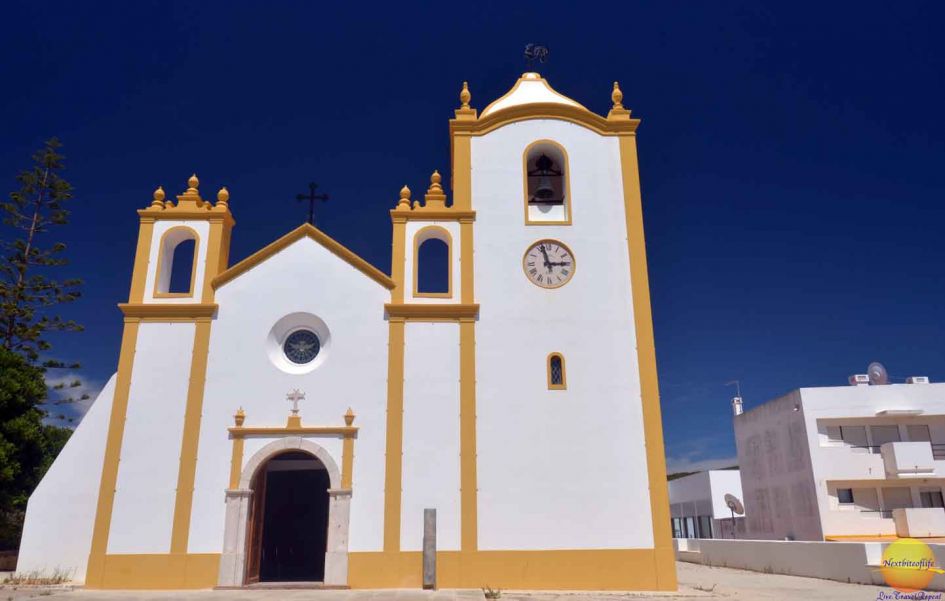 One of the many Lagos Portugal churches. Though small, the interior is elegant, similar to what we find in Spain. The Catholic church is plenty rich!. 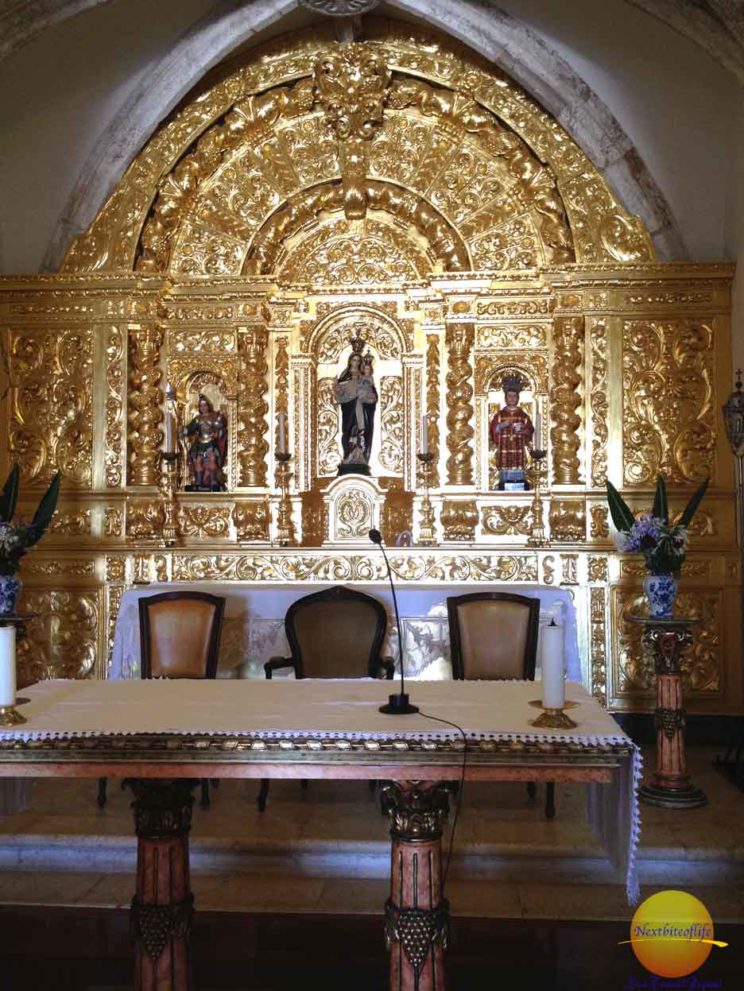 It was a little church in the Algarve, but the interior dazzled.

We found Lagos to be a lively and historic place, utterly quaint and charming. Despite the fact that the city was packed, it didn’t feel crowded. It was more like a steady hum of activity which l found fascinating. Imagine someone  pushing the slow motion button on the remote. Very hard to describe, but no one place was too crowded despite a large number of people. 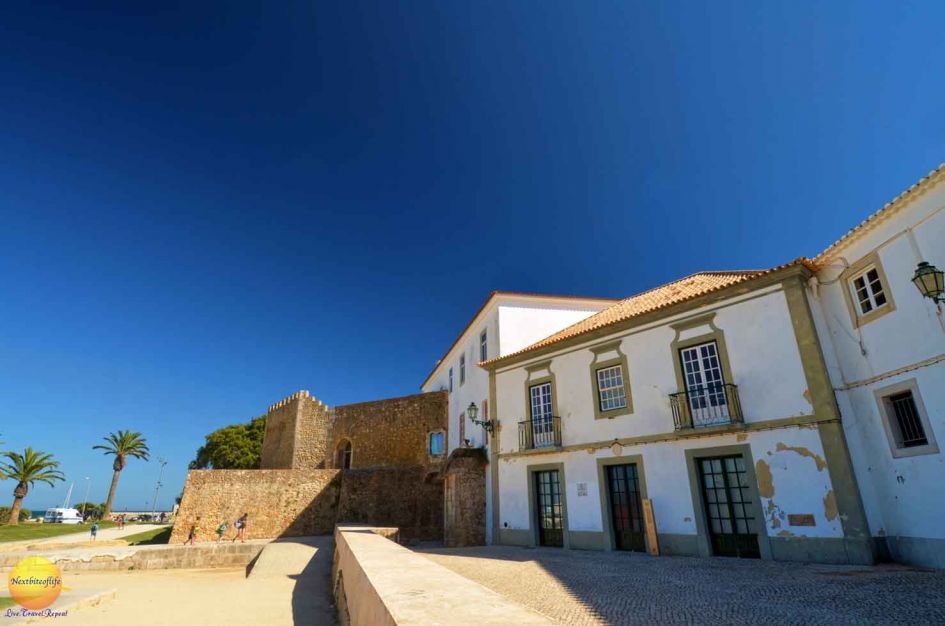 You can see part of the remains old city wall in Lagos Portugal.

Lagos Portugal is the perfect destination for sun lovers.  Where is Lagos you ask? It is located on the coastline of the western Algarve region of Portugal and one of numerous quaint towns. To say the beaches are beautiful would be an understatement. The rocky beaches remind me of the ones in Malta a lot, only much bigger. Even though we didn’t actually spend time at the beach,  we visited a few. Perhaps next time.

Visiting Ponta de Pierdade should also be on your Lagos itinerary. You can find our dedicated post to this absolutely stunning place including how to get there from Lagos here on this Ponta Post. 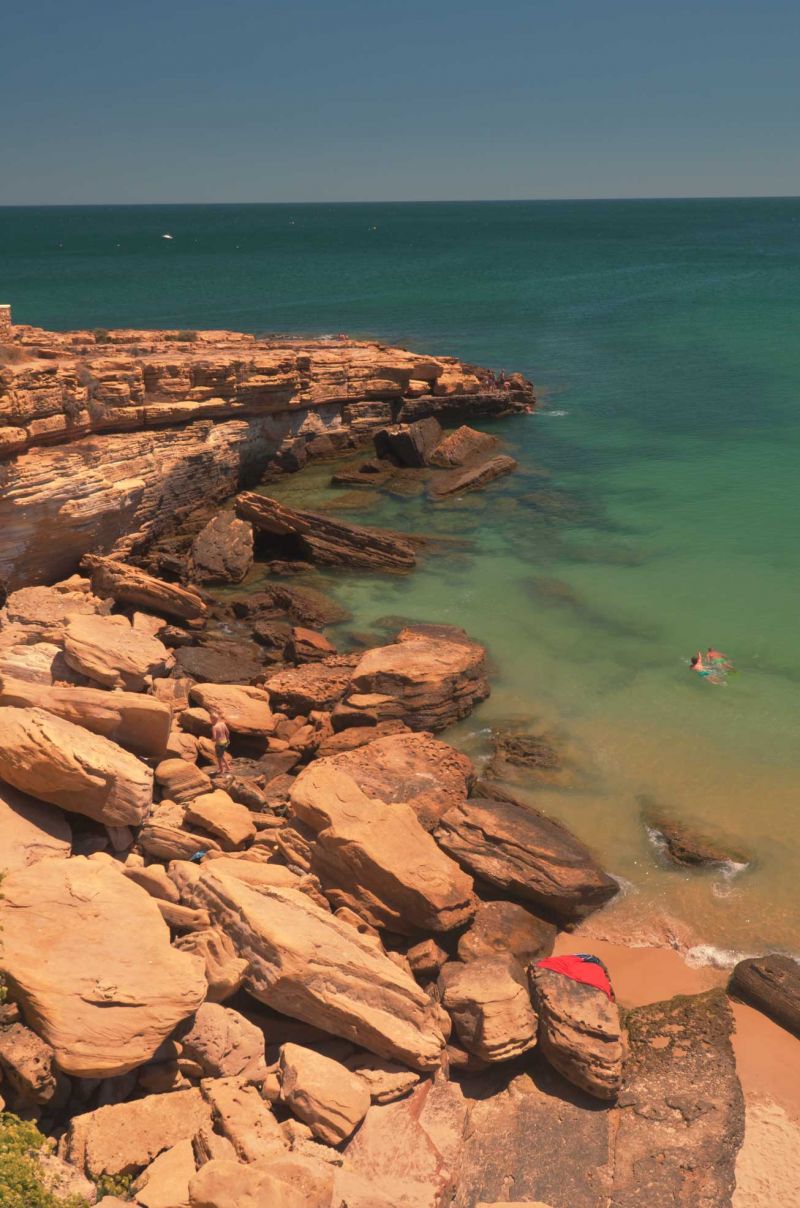 One of the many rocky beaches in Lagos Portugal. Reminded me of the ones in Malta, only larger swatches. 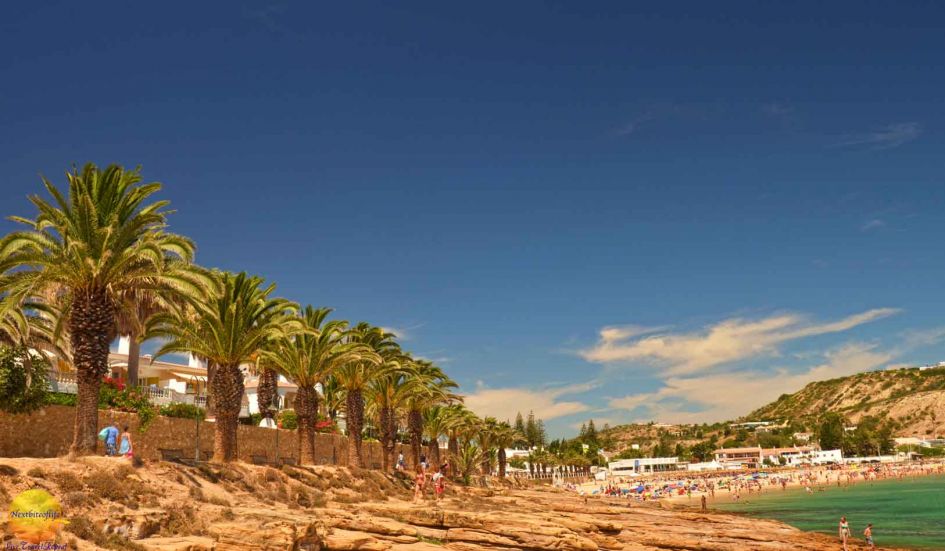 Rocky or Sandy beaches? Your choice as Lagos Portugal beaches come in both! Of course you can also Dolphin watching along with other water activities. 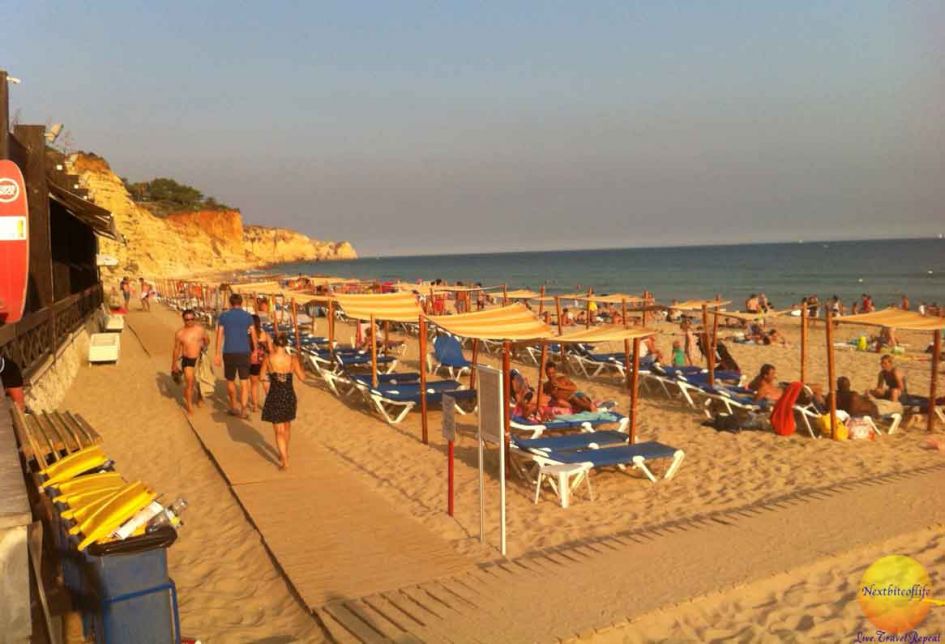 The beach closest to us as the sun was setting. Fun place to be in Lagos Algarve region.

The cuisine is very similar to what we have here in Spain. A lot of fresh seafood. We loved it. 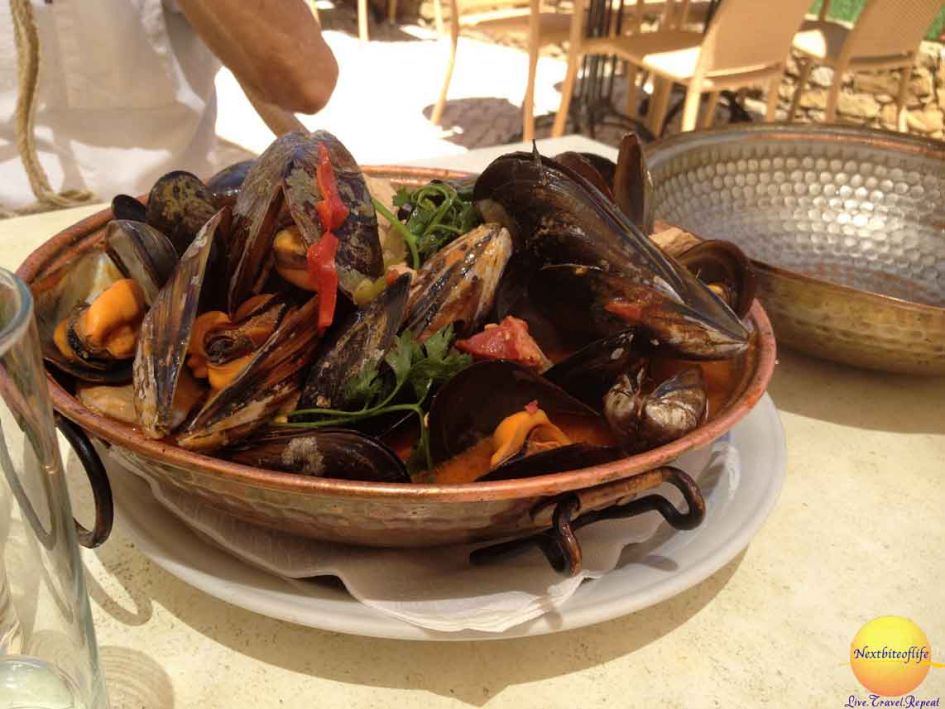 Lagos Portugal restaurant: This was Anita and Richard’s food. It was huge and they ended up taking the rest home. 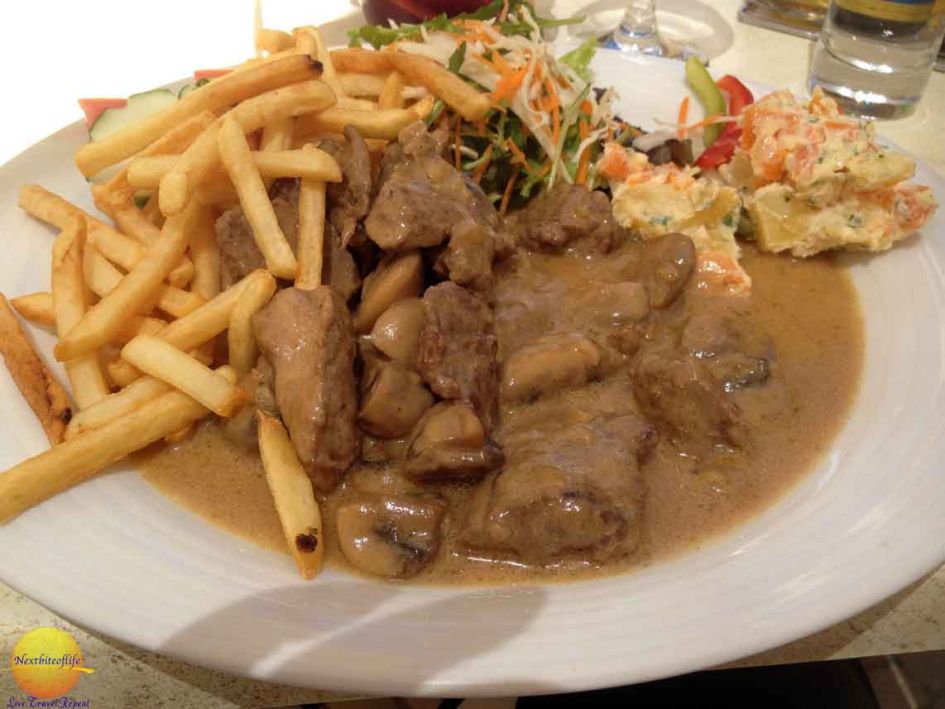 Dining in the Algarve region of Lagos. Yum..their version of beef and gravy. 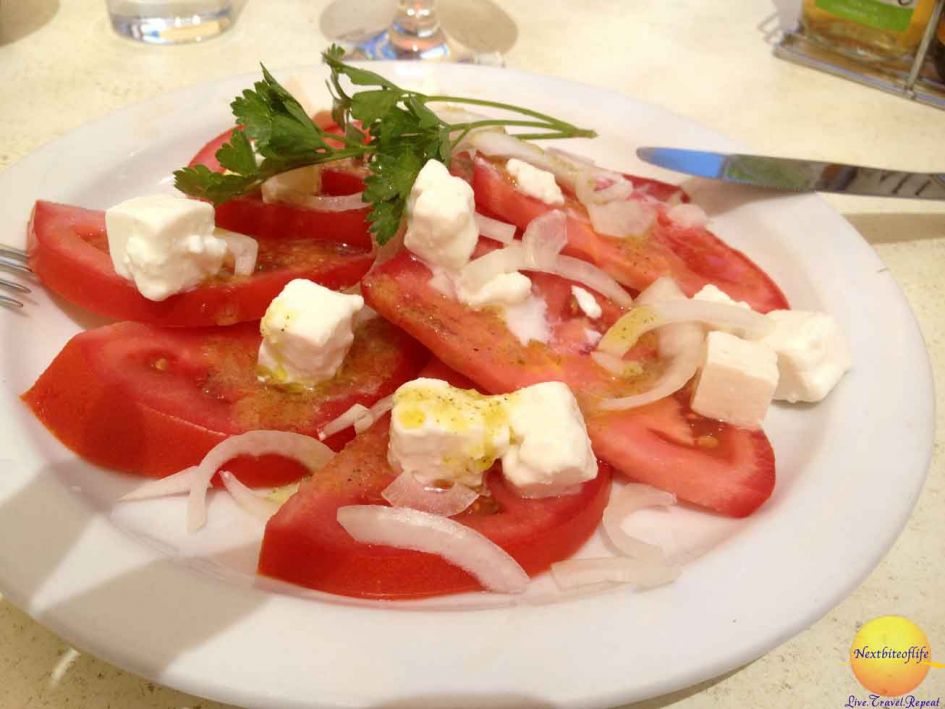 This was so good! Caprese salad 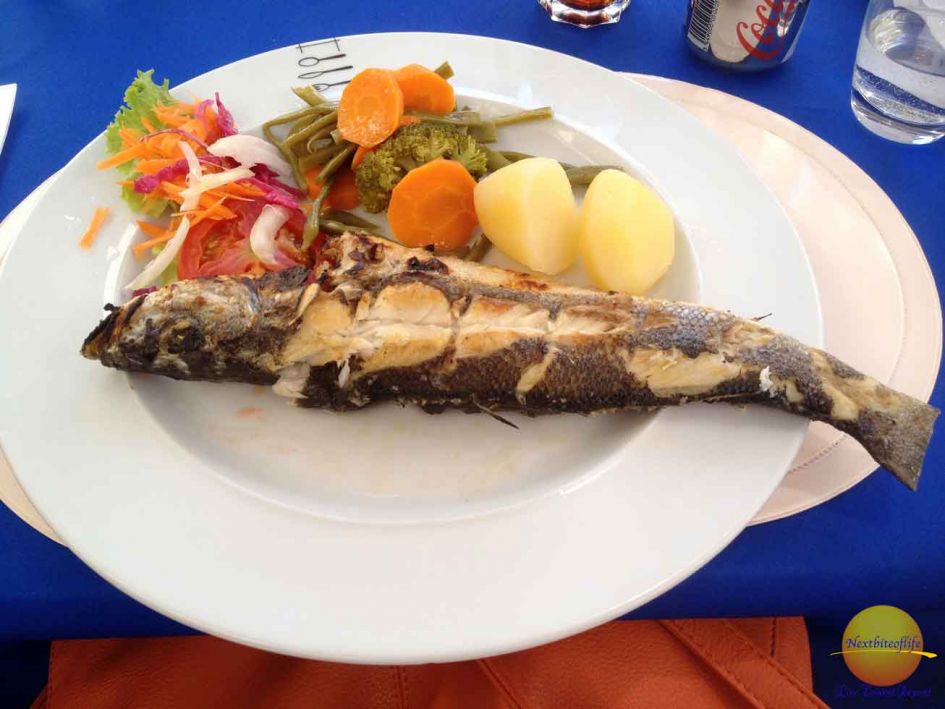 Fish dinner at Algarve Portugal restaurant. Love how they serve you the whole fish!

How could we call ourselves foodies and not have images of food? :-) . We went to one Algarve restaurant called Forta Leza de Luz located in the little town of Praia de Luz, one of the many Algarve towns. I highly recommend this place if you visit the area. The food was fantastic.

The views were spectacular. It was just perfect. The service, while not impeccable, was way, way better than you get in other parts of Portugal and for sure Spain. The service at other places we ate at was more what l have come to expect. Nonexistent ;-) . The food makes up for it though. 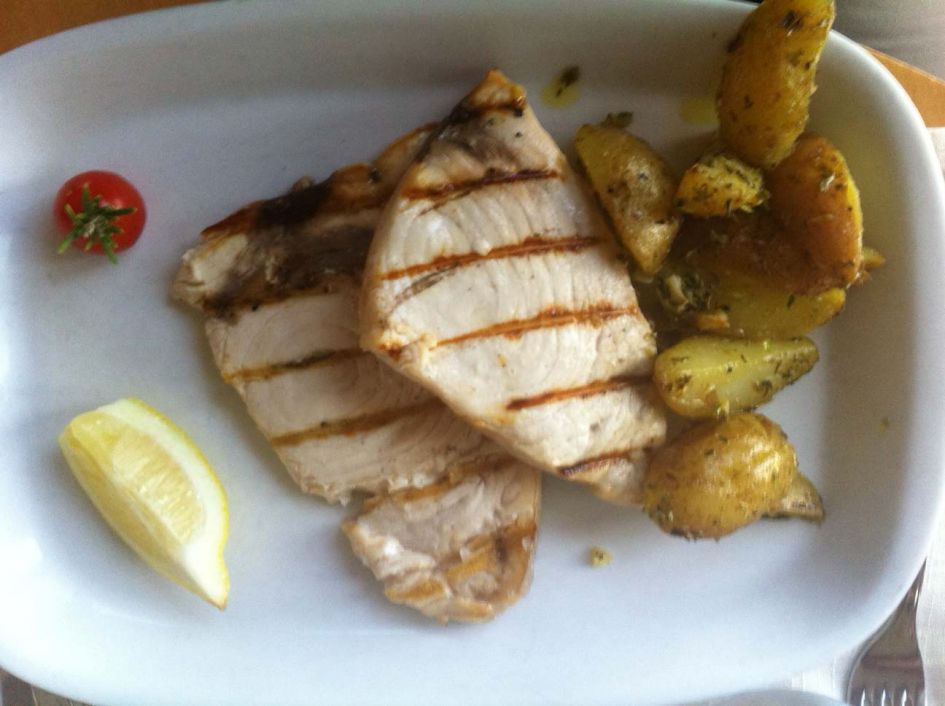 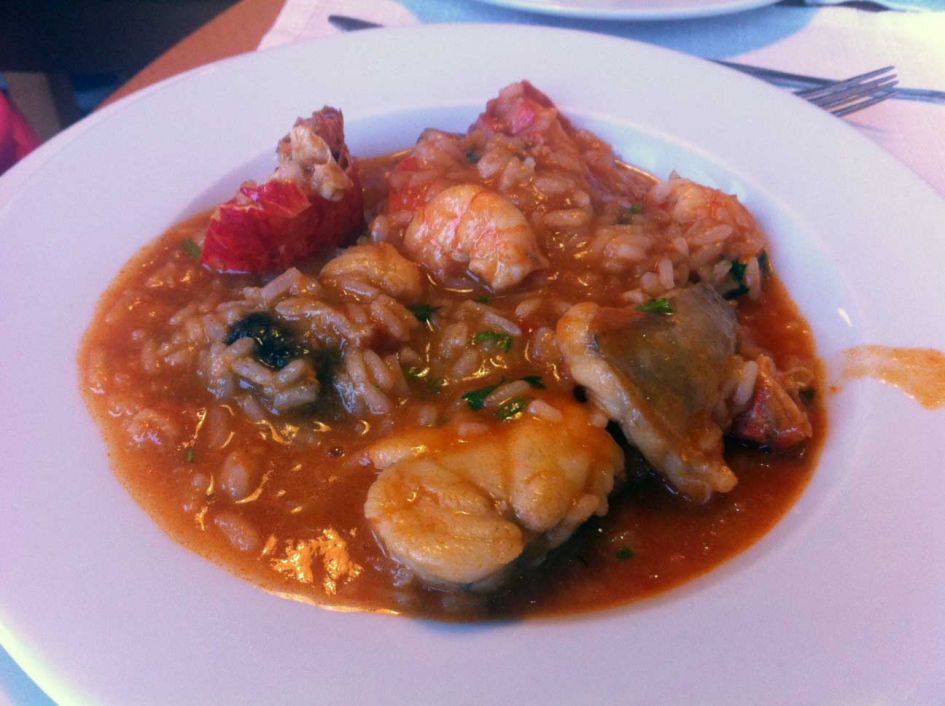 Seafood risotto which was quite good at one of the many Algarve region restaurants.. We honestly did not eat a bad meal. 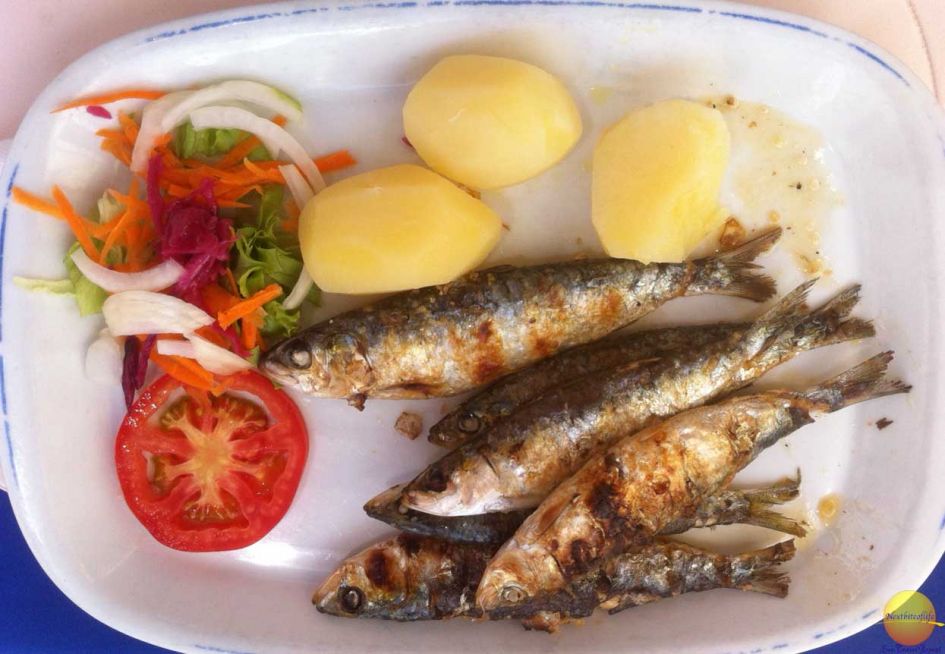 Grilled sardines in the Algarve Portugal area of Lagos.

Anita and Richard also took us to the most amazing gelato place in all of Lagos. Do yourself a favor and check it out. Federico and l both agreed that it is Italy worthy! 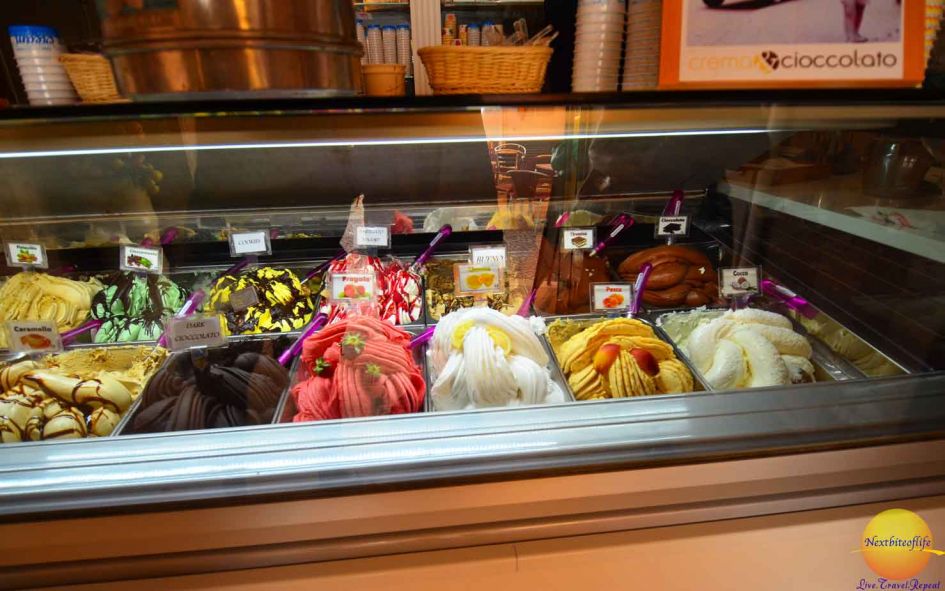 So, so good! Gelato in Lagos Portugal 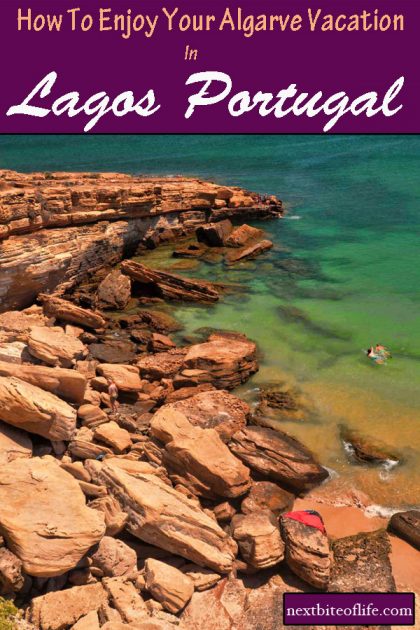 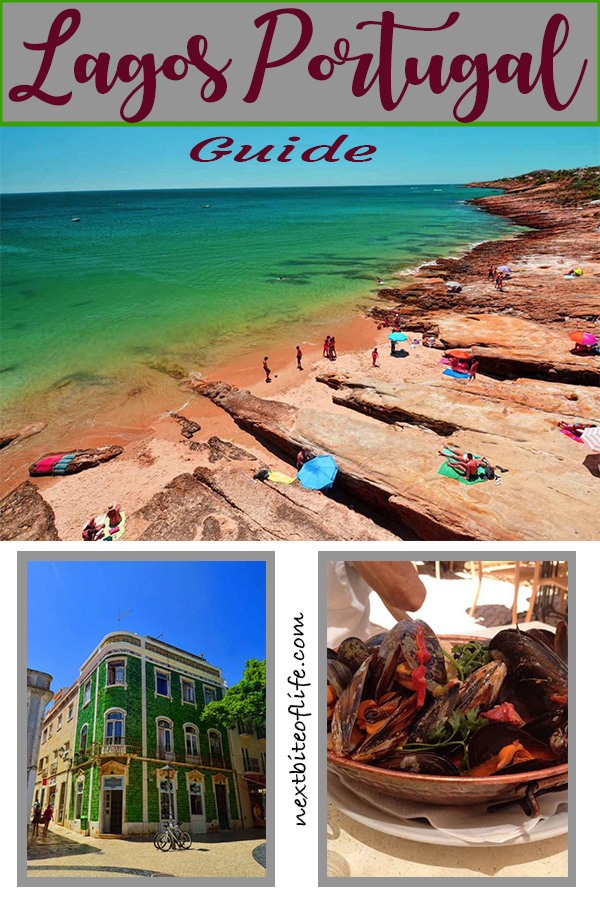 What do you think of the Algarve town of Lagos? Does it look idyllic to you? Do you enjoy slower pace vacations or are you an always on the go person? I like both. What about you?