How To Get To Valencia Center From The Airport 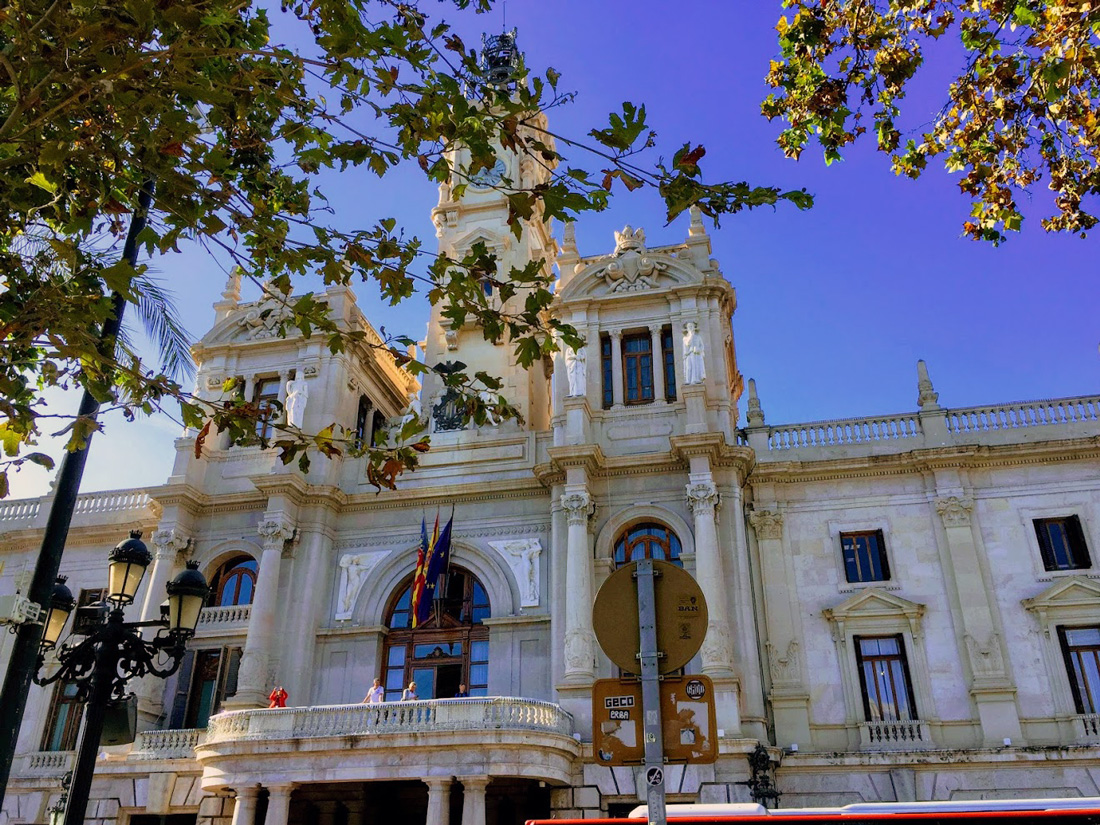 A question l often get asked in emails by visitors is how to get to Valencia center from the airport. While it sounds pretty straightforward enough for me, I forget that a lot of people visiting might not be familiar at all with using public transportation. Looking back to when we lived in Los Angeles and Houston, two places where public transportation did not really exist and everyone drove, I can’t even remember ever taking the bus. In an effort to be more helpful to people visiting Valencia, I have decided to mix in Valencia centric posts along with travel ones.  Here is a guide of how to get to Valencia city center once at the airport. 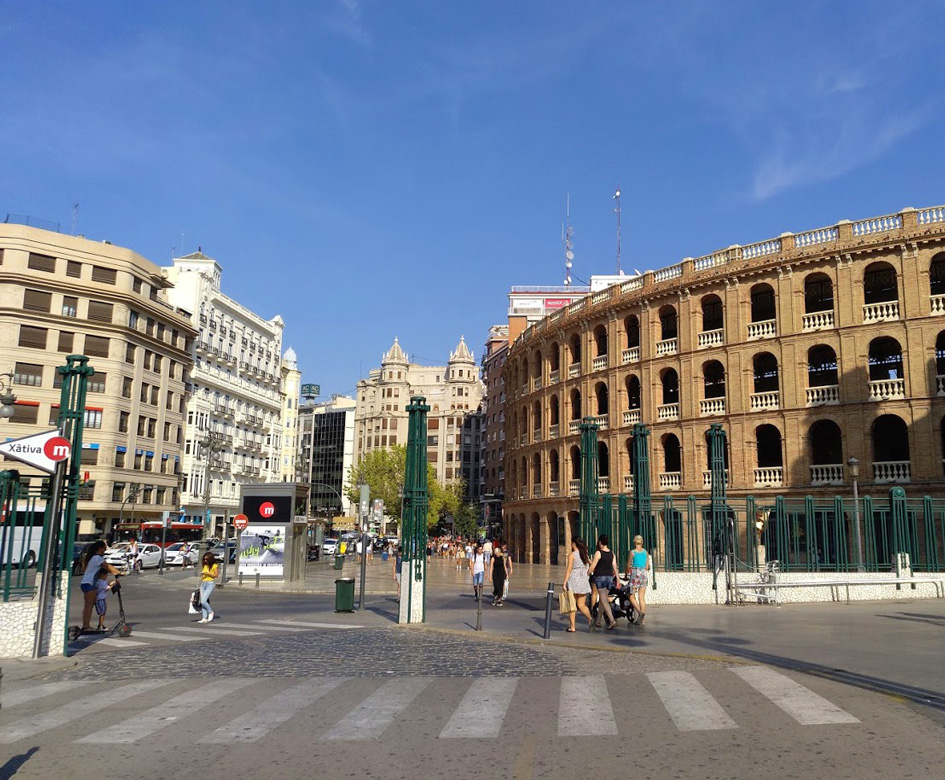 You can see the Xativa Metro sign in this image. You have reached your destination.

How to get to Valencia Center from the airport:

Living in Europe has exposed us to using public transportation almost exclusively. I have talked in the past about using our car so sparingly in Valencia that we have actually had to have it jumped at least twice. It’s so convenient to just walk everywhere of take the bus/metro. Here are the different ways to get to Valencia center from the Manises Airport in Valencia.

The Manises or Valencia Airport (airport code VLC) is located approximately eight kilometres away from the city core. It is the tenth busiest airport in Spain and has connections to over 20 European countries. We are two of the almost six million passengers that make their way through the airport yearly.

Getting to the center from Manises airport by car:

Valencia city is pretty flat, so it’s easy to navigate. There are several car rental companies located at the airport from which to rent a car including Auto Europe car rental service company which will compare prices for you. If you are visiting, you can drive with your license from wherever, along with an international driver license.

Tips for car rental in Valencia:

Taxi from Valencia airport to city:

A taxi is of course a luxury, as well as a time saver and a very convenient way to get to your destination. No dragging your luggage all over the place, or waiting for the bus or metro and it drops you off at exactly where you need to go. A taxi ride from the airport to the center of Valencia will run you roughly €21-27. The good news is that it is still slightly cheaper than other cities like Barcelona, Madrid and Sevilla. The Valencia airport taxi stand is right outside of the arrivals area so you can’t miss it. Just get in line.

Along with the regular cabs, an app that a lot of people who live in Valencia use is Cabify and the prices are slightly cheaper. Cabify is our version of Uber (not allowed here anymore). They even give you free water and WiFi while riding. Taxis are also pretty affordable here. We’ve rarely paid more than €6 to get us around the city, more often it is €4 (rounded up as that is the minimum charge now). You can request a cab that allows pets if you have one as sometimes cabs are reluctant to carry them.

A Valencia airport transport service is another way to go for door to door pickup service. They run 24 hours a day but since they pretty much cost the same as a taxi, I won’t talk much about it. They might be useful if you have a lot of luggage, for instance someone moving to Valencia or someone with pets in holding cages. 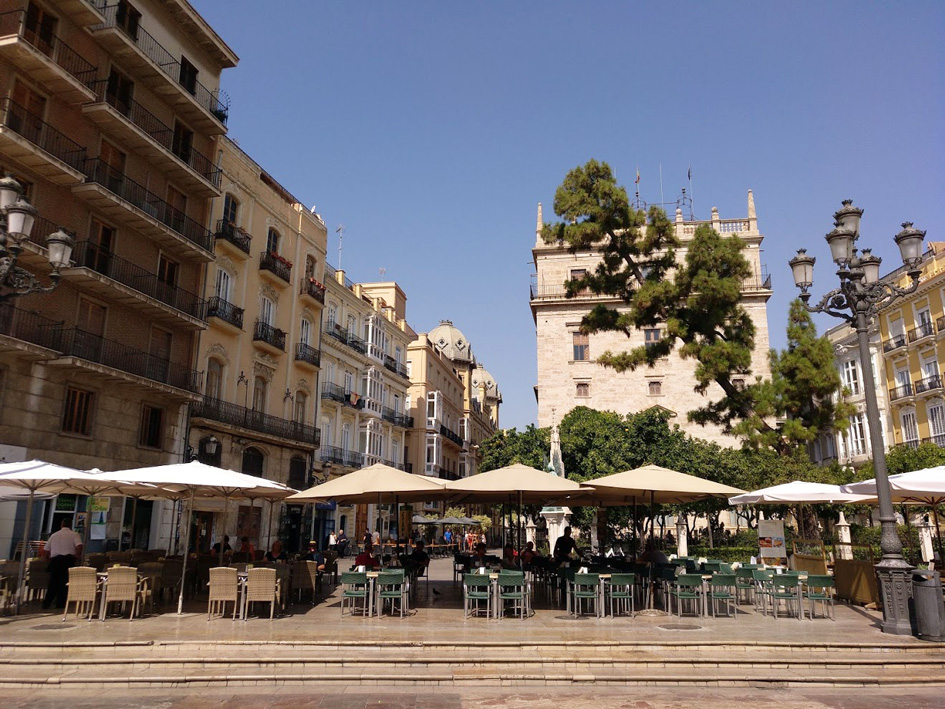 The old center is just a few minutes walk from the Xativa station so you can begin enjoying your Valencia holiday.

Bus from airport to Valencia center:

The city bus number 150 is the cheapest way to get to the center. Your journey time is about 40 minutes and the cost is €1.45. You purchase your ticket on the bus. Keep in mind that the biggest note denomination you can pay with is €10 so make change if needed before getting on the bus. The latest timetable is below: 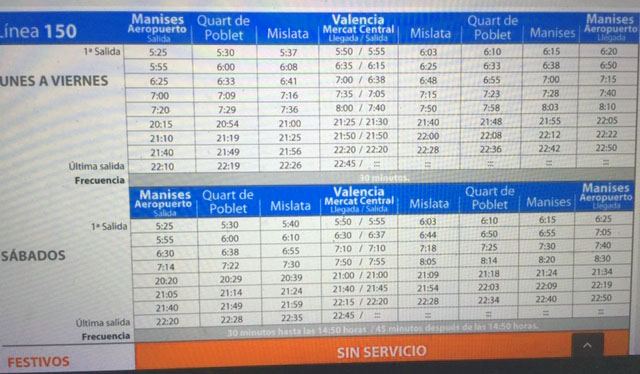 You can see the departure times for the bus so make plans accordingly. They don’t dawdle :-).

The bus stop is right outside of the Departure area. Bus service ends roughly at 10:30pm. On Saturdays, the wait time increases to 35-40 minutes. There is no bus service on Sundays. Cheap maybe, but it’s not my favourite way to get to the centre.

Getting to Valencia center  by metro:

This is by far my favourite way to get into town. I find it quick and efficient. The metro stop, appropriately called Aeropuerto, is located two floors below the arrival area. Once you have claimed your bags and step outside, turn to your left and keep walking, you will see the big red M sign as seen in this picture: 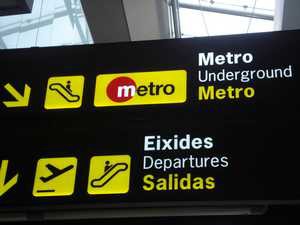 There are attendants at the booth to purchase your metro ticket when you get there. There are also free standing machines from which to purchase, and with language selection. The cost is  €3.90 each way. Tip: you can save a few cents by purchasing your round trip ticket for €7.40 at the same time, but more importantly than the savings, it can be a much needed timesaver on your return trip because the lines at the centre metro station are usually long. Kids under six years old ride for free. Each adult can bring up to two kids.

The metro runs from 4am  till 11.30pm on Mondays through Fridays. On Saturdays and Sundays, the metro runs from 5am till 12.30am (talks to extend weekend hours are ongoing). If your flight departs or arrives outside of these times, then a taxi ride or one of the airport transport services like Rideways would be options. 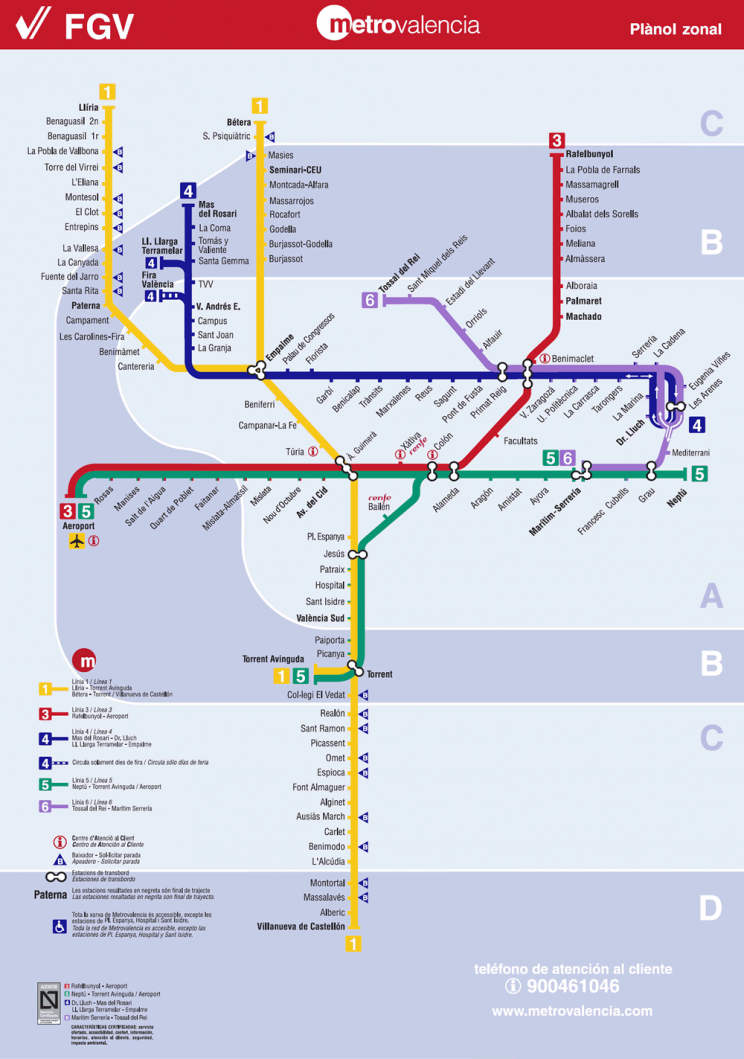 Valencia Underground Map: Lines 3 and 5 run from the airport to the city center. This is also handy for reaching other parts of Valencia that are serviced by the metro.

The Metro lines 3 and 5 are the ones that begin their journey from the airport. To get to the city center, you can take either one as they both stop at the station named Xativa . The journey time is roughly 25 minutes. The trains departs every 15 minutes.

Now you know how to get from Valencia airport to the city center. It is not scary at all, so no need to spend the extra money (unless you want to) by taking a cab. Valencia is a pretty walkable city and once in town, you should be able to drag your bags around to your hotel/lodging like everyone else. 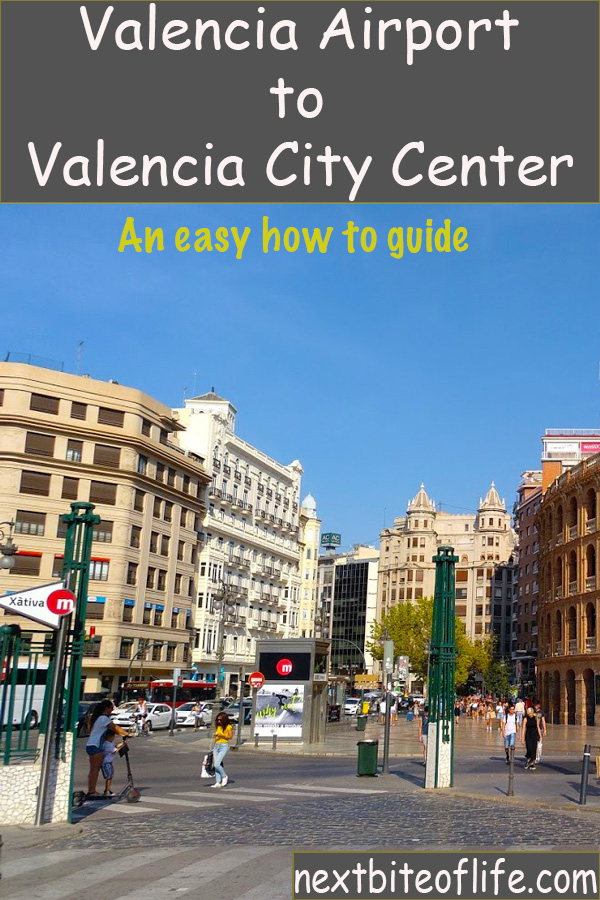 Are you familiar with using public transportation where you live or when on vacation? Would you use the metro to get into Valencia from the airport or would you just skip it and take a taxi?