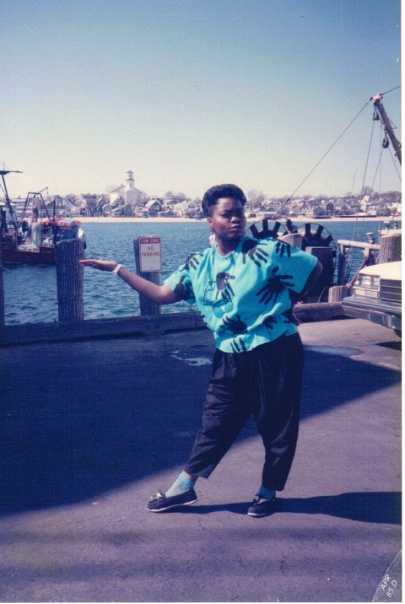 In my defense, let me just say that this picture is dated April of 1985! It was the 80’s! Everybody dressed like this. At least, l would like to think that they did :-). Don’t forget that MC Hammer was all the rage with his hammer pants. I was all over it too. These were also the days of Duran Duran, Frankie goes to Hollywood and the ultimate bad girl in those days, Madonna. This outfit was my way of combining everything in one go, right down to the feather earrings :-).

I remember that tee shirt well. It was one of those glow in the dark ones, so under the disco lights, the hand prints were neon. I loved wearing it to the clubs in Boston, and especially to the roller skating rink called Spinoff on Landsdowne street. I felt so cool!

This picture was taken in the Cape Cod area of Yarmouth port l think. My friends and l had gone on a long drive from Boston. There were six of us in this big car. There was also a guy l had a crush on along with us. He was visiting a mutual friend and was in town for the weekend. I remember desperately hoping that he would like me, l mean, really – who could resist this hot tamale? :-). Resist he did though :-(.

You see, he , on the other hand, had a crush on my friend A., a hot Cuban tamale herself! Can l just say l was thrilled though,  because, A. had her own crush on M, and so was definitely not interested in this guy. Let’s just say, nobody got what they wanted, except for A. who ended up marrying her crush, and they moved to Florida. Their marriage lasted for almost 15 years from what l gather. We unfortunately lost touch after a few years.

Anyway, l was footloose and fancy free in this picture. I can’t even believe that l wore matching socks, which was also a thing back then, and yes..they glowed as well :-). The one thing l pray for? That this fashion style NEVER comes back, no matter how much Justin Bieber and even Brad Pitt etc. tries to make it happen. Those days are gone forever, and should stay like that. U can’t touch this! :-)