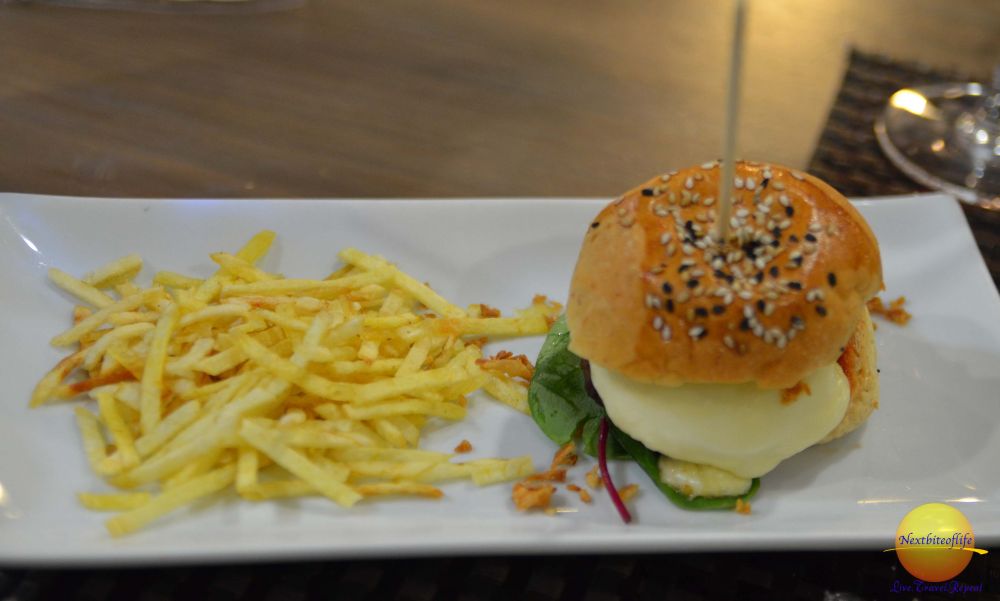 The El mercado de Enma is located in the pueblo (town) of Mairena de Aljarafe, a suburb of Seville. Boy, am l glad we discovered this restaurant. It is a great find. The food is delightful. The atmosphere is relaxed and the staff is awesome. We were about to make some chicken wings for dinner, but l just wasn’t feeling it.

We decided on tapas, but wanted someplace different from the usual haunts we have in our pueblo, so of course l took to the internet :-) . Oh..where would we be without it? A quick search of restaurants and El mercado de Enma popped up, we decided to give it a try. 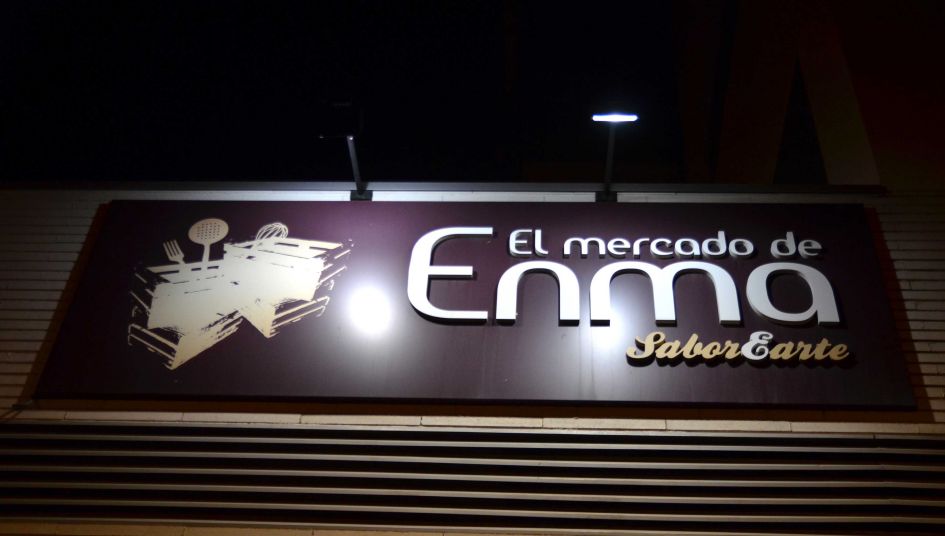 What we didn’t realize about the Mercado de Enma location was that it was the street version of a mullet hairstyle – Business up front, and party in the back!!! :-) . Just behind the main road is a lovely street filled with loads of tapas places. Who knew? We have been living in Seville for almost six months now, and we never knew. We thought the commercial area further on down was the only place for food. Duh! 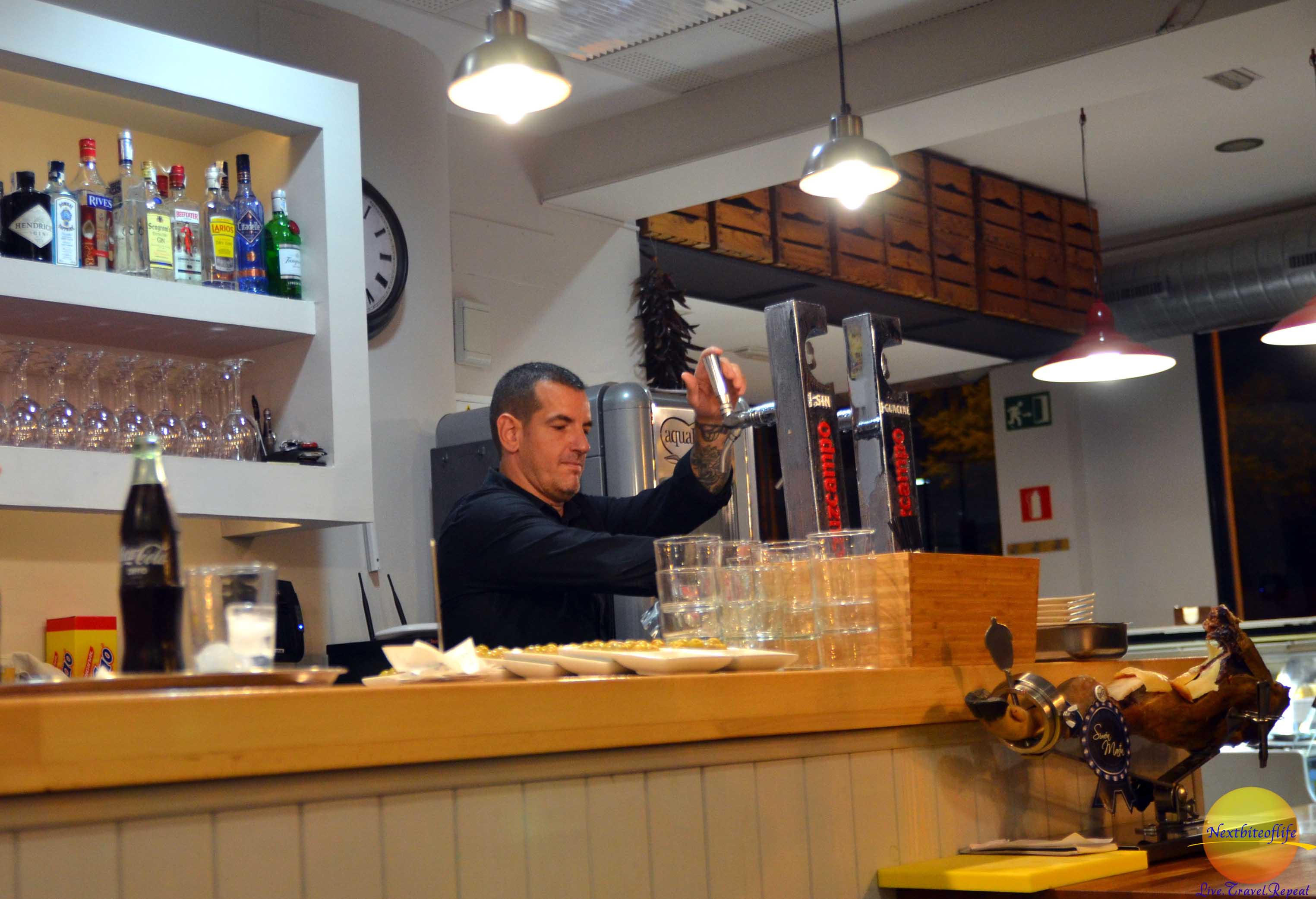 He had the biggest smile, and the coolest head as he got a lot of orders for drinks.

The El mercado de Enma is what l would describe as a progressive restaurant. I am willing to bet that the owners are young. I say this because l tend to notice things like: 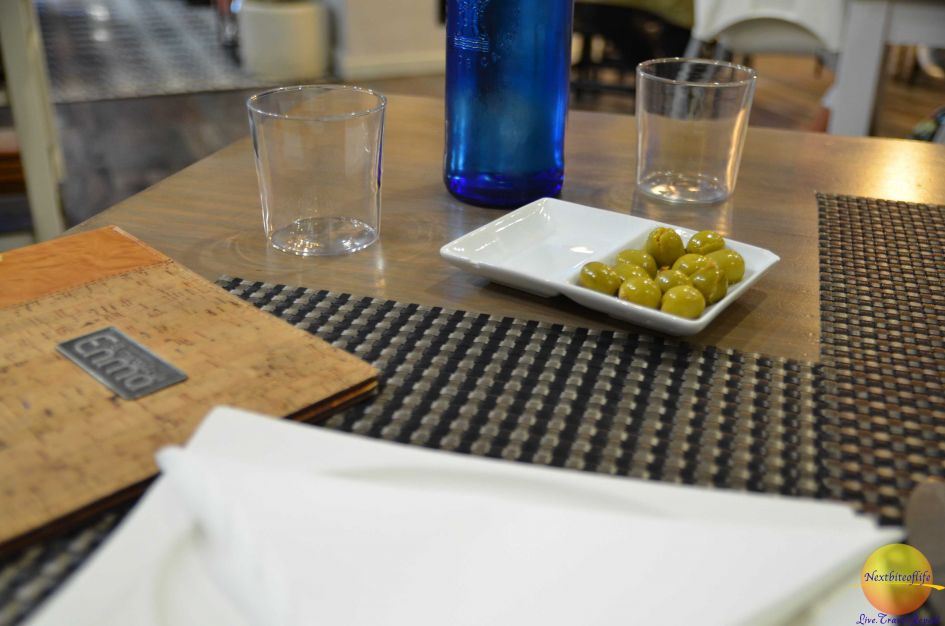 pitted olives, a “must” offer starter in Andalusia..

– The space is contemporary, with stainless steel cooking appliances. It has an open kitchen, so you can see whats going on.  The waiters and waitresses are in black uniform, and they take the orders with a hand-held device. This cuts down on a lot of errors as the order is transmitted to the kitchen directly.

– They have a lot of staff that work as a unit. Most restaurants here will have one or 2 waiters at the most who handle all the tables. That is partly why l think the meals can last hours. It’s not just waiting for the food, it’s also waiting for someone to take your order :-) . This adds way more time when you’re trying to catch the waiter’s eye. Here, someone takes the order, and when the food is ready, another waiter/waitress will deliver it to the table if your waiter is busy elsewhere. etc. This is quite efficient. You can “turn over” the tables quicker. Boom! Increased revenue. 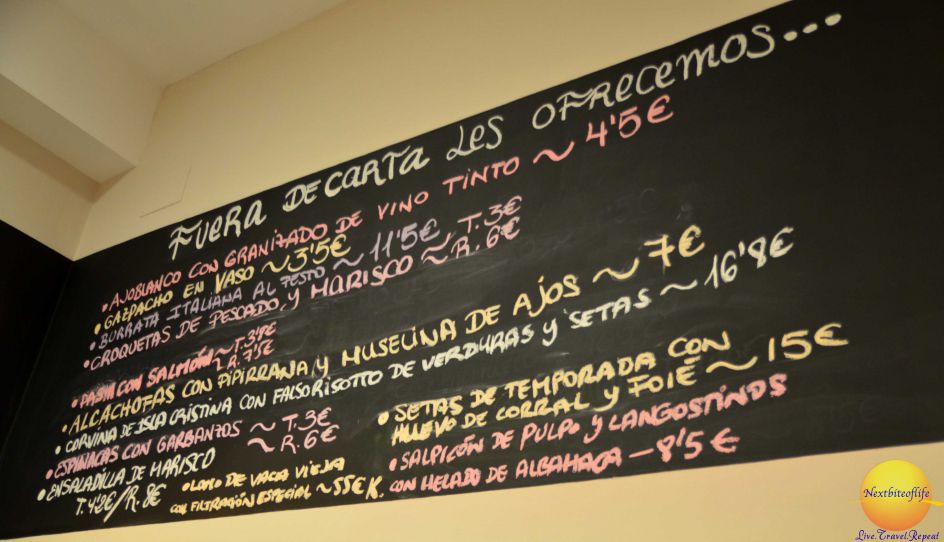 – They also have some of the food available for takeaway. Also, very forward thinking! They say you can always tell how good a place is by the number of locals eating there. Of all the restaurants on the street, this was the most packed! Imagine how nice it is to get the food to take with you if there are no seats and you really, really want the food. Takeaway is something that isn’t very common around here. It’s nice to see.

– Presentation is very nice. We have eaten at so many other places that were good, but l haven’t written about because great food is presented on the most horrible plates, with colors like gross green and shades of yellow etc. which clashes so much with the food, and they look terrible in the pictures ;-(

Now, for the food!!! Everything was fantastic! We had a total of five tapas, 2 desserts, a liter of water and an excellent glass of Malaga produced wine. The bill was €30. It is a very fair price indeed in my opinion. I should have paid more attention to the board that has the daily specials as l would have also ordered the spinach with garbanzo beans, which l have come to love. 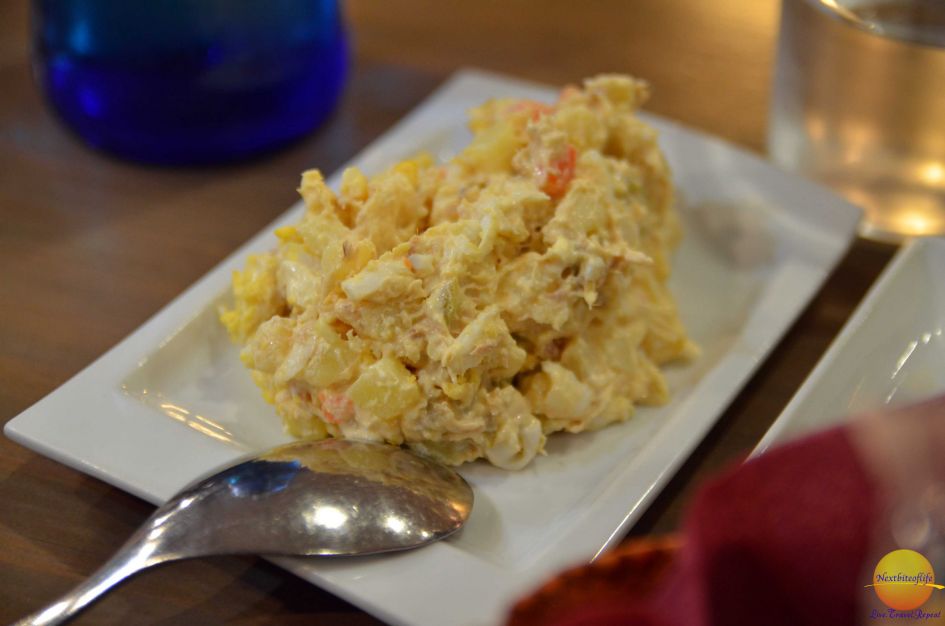 Aljarafe tapas: Hands down, the best tuna salad l have ever had. I’ve made it often, and just once did l get it to come out perfect like this, many, many years ago :-) . 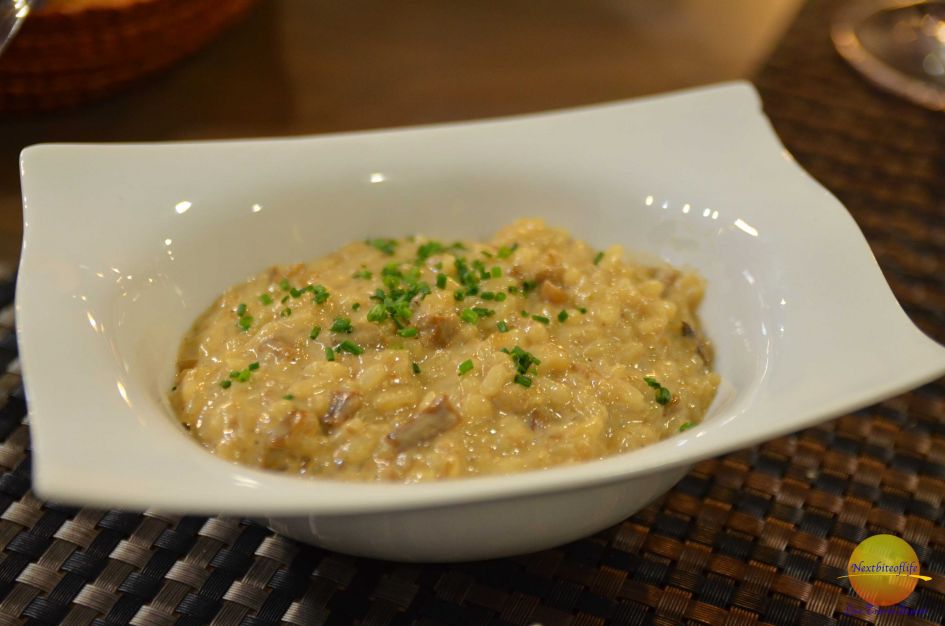 Comer en el Aljarafe: The mushroom risotto. It was simply perfect. We had a hard time deciding which tapas was the favorite. It came down to this.. 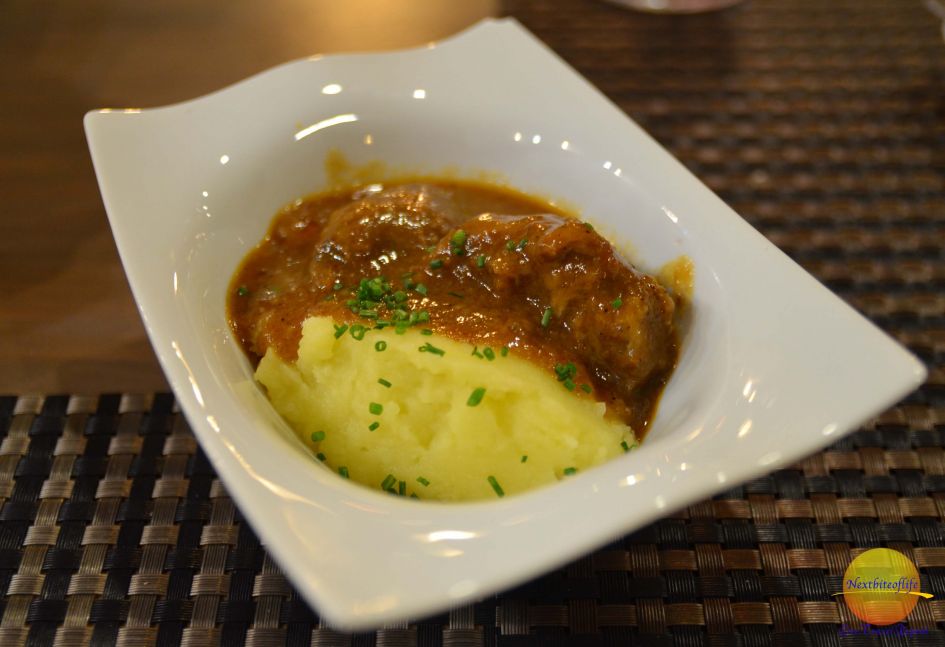 ..and this. This dish is called Carrillada. It is stewed meat of beef (cow cheeks if memory serves me right). It was served with mashed potatoes, and a curry gravy was just insanely good. It melted in your mouth. Bliss!

FIND YOUR HOTEL IN SEVILLE HERE 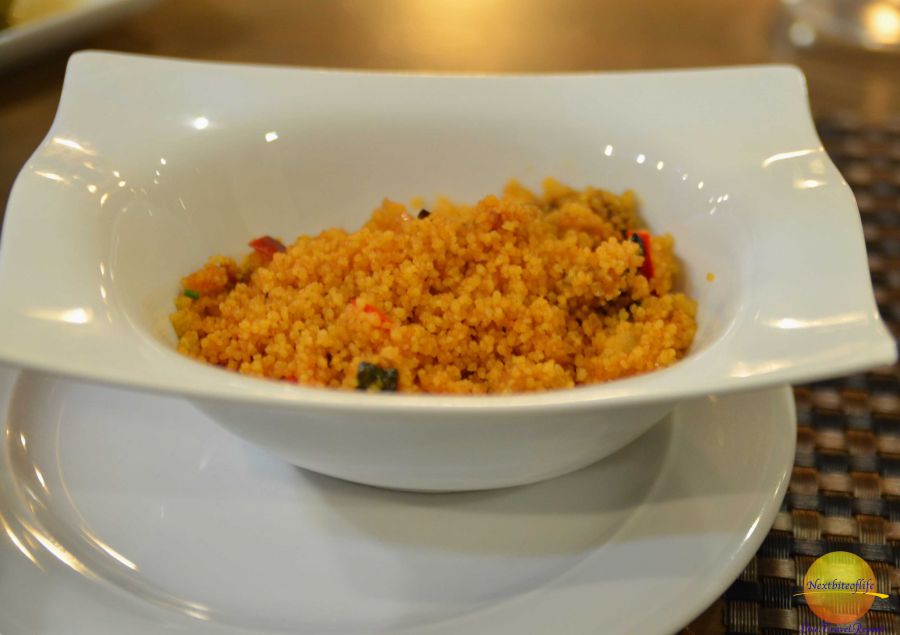 The vegetable couscous was just right. Not too dry or mushy. It was the perfect blend of grain, eggplant, red peppers, onion and raisins.

I did not have any of the cheeseburger which was served with some delicious crispy fries. Federico had that all to himself. He said it was good. I didn’t want to eat it because as l have mentioned before in a previous post, l just can’t get excited about the hamburgers here. The meat just tastes a bit different to me. He liked it a lot, but he said he would have preferred another helping of the risotto or the meat. They were awesome!!!

For dessert, he had a yogurt with fruit parfait. It was so delicate. The yogurt was extremely fresh and the cherries were tasty. There were swirls of honey to add some natural sweetness. I tasted it, and it was great. 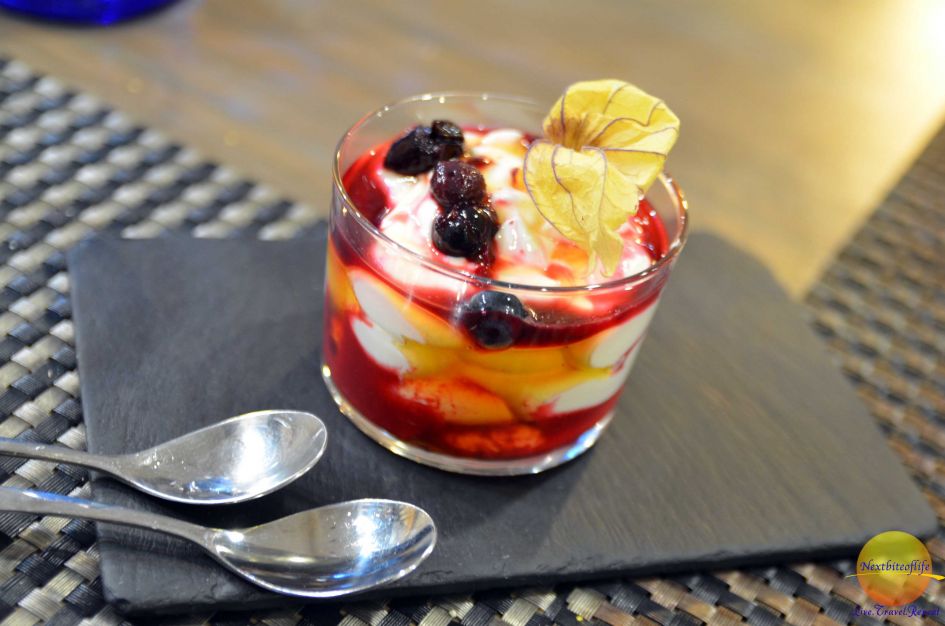 What was even greater was my dessert :-) . It was small but amazing. It was called a bombona con chocolato (chocolate bomb) . You could choose to have it with vanilla creme instead. The outside was crunchy, almost like a Chinese wonton and the inside tasted like a souffle and was dusted with confectioners sugar. It was only a bite, but what a blast feeling the warm chocolate with the crunch. It was just WOW! Like a bomb, as the name says :-) . 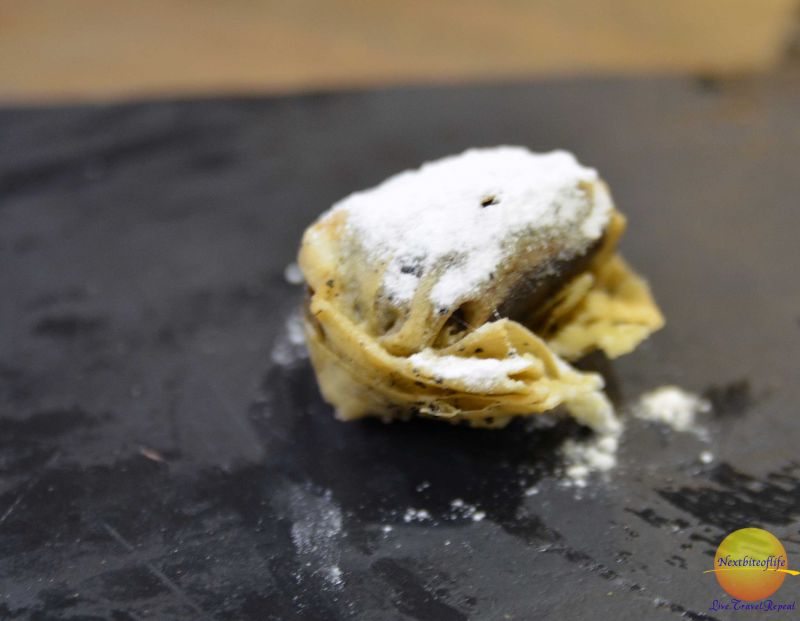 On the whole, l highly recommend this restaurant. It has great food, great staff and good prices. If you are in Seville visiting and don’t have transportation, it might not be feasible as the closest metro stop is about a mile away. It would not be convenient. If you have a car however, yep! I think it’s worth the 10-15 minute drive from the center.

The only negative thing l have to say about the El mercato de Enma is that there were a quite a few families with really young kids, at least on the evening we were there. It’s not neccessarily a bad thing, but the parents did not discipline most of them.

I don’t blame the kids, they are just being themselves. I do however blame the parents. There was a lot of screaming, yelling, and crying. At one point, there were like 2 kids about four years old on their knees crawling around the restaurant playing,  the waiters had to wrangle their way around them.

My wicked side was like, it would only take one swift kick and an “oh sorry.. l didn’t see you there” to put an end to that nonsense. :-) . So, the couples like us and several others were screwed :-) . It is certainly not the fault of the restaurant, but next time, we will try a different time.

Since this place is usually busy, you definitely want to make a reservation. I was telling Federico that we should just turn up early. I’m glad he didn’t listen, we would have had to wait, which would have made me cranky as it was already past 9pm.

The Mercado Enma is definitely one of the best restaurants in Seville. I think it is worthy of a visit even though it is not in the very center of Seville. It’s worth the metro ride to have a taste of authentic Spanish food.

RESERVE YOUR SEVILLE HOTEL FOR YOUR VISIT 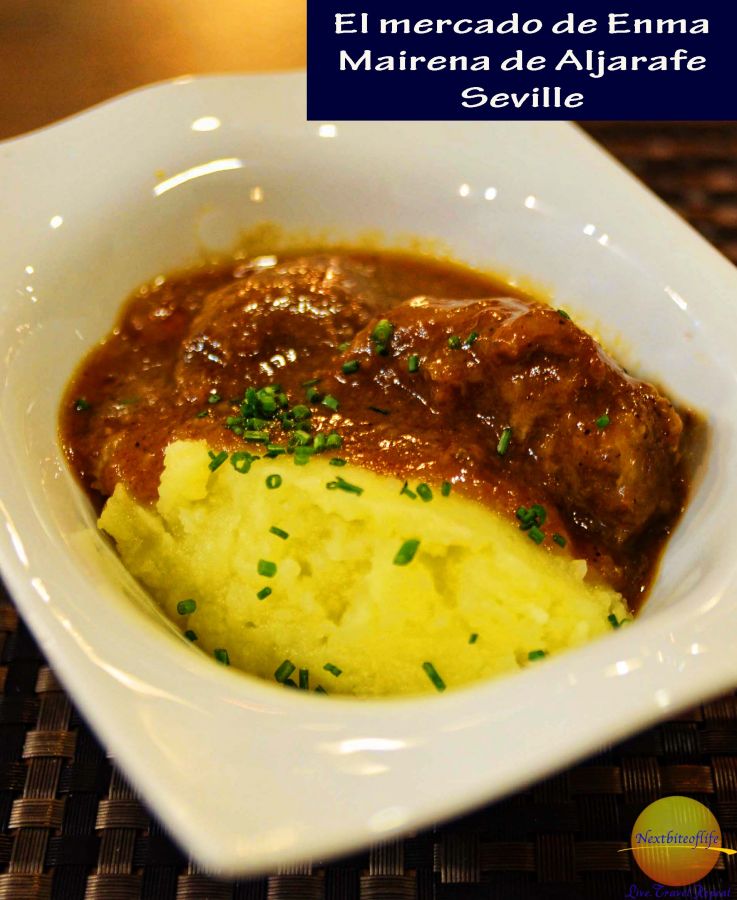 What do you think of El mercato de Enma? does it look like a place you would like to eat at? Are you feeling the Andalusia region, especially Seville more now? :-)