Colosseum And The Best Pizza In The Rome! 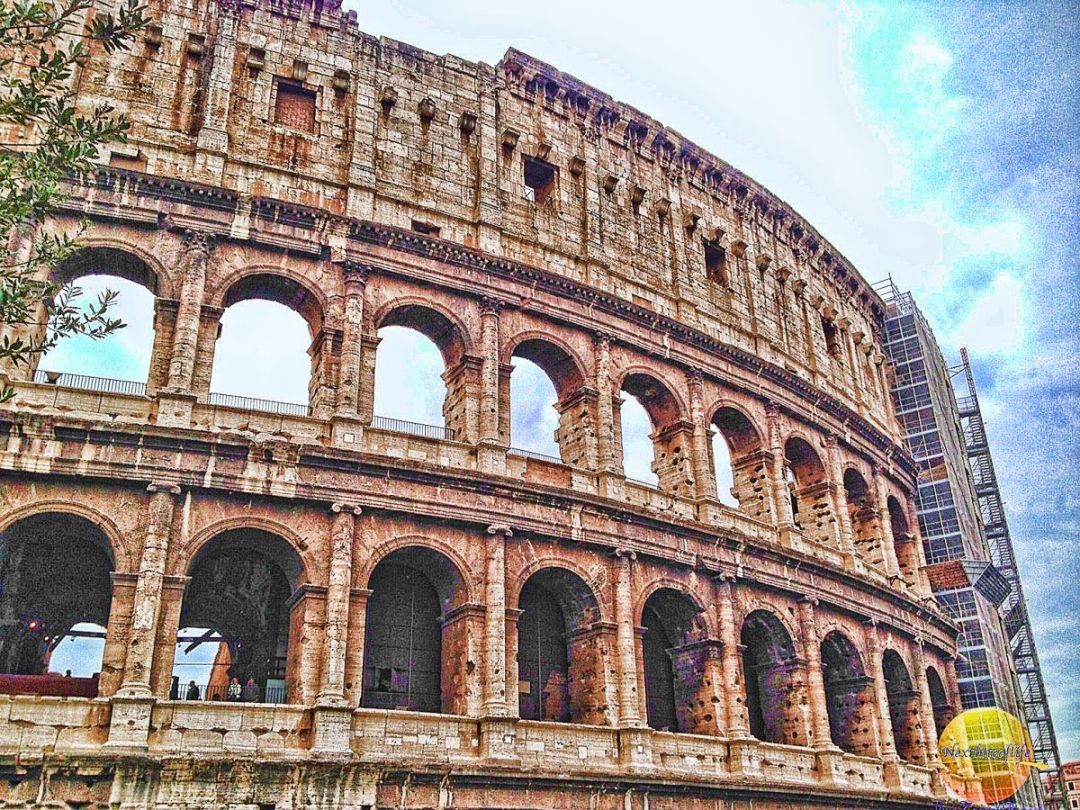 The Colosseum in Rome

As l wind up my series of posts about Rome, l thought it fitting to have that true symbol of Rome be one of the last things covered, along with where to find the best pizza in Rome.  I doubt if there is anyone who has been to Rome and didn’t make their way to the Colosseum.

Most people know the Colosseum as the place where the gladiators fought for their lives against lions and each other, to the sadistic delight of noble emperors and town folk. The Hollywood treatment can be seen in movies like “Gladiator” and “Spartacus”. After your visit, you can find the best and tastiest pizza in Rome super close. 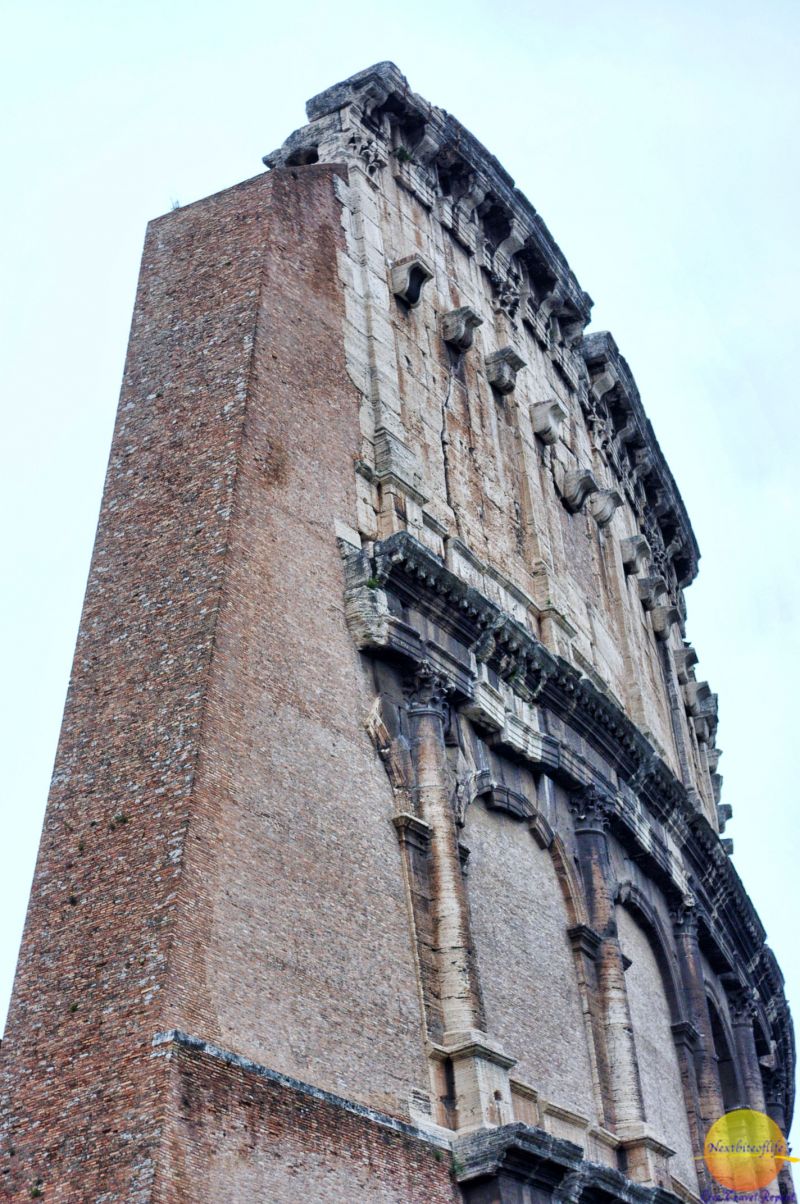 An icon and a must visit in Rome for tourists.

A little history of the Colosseum:

The Colosseum is also called the Flavian Amphitheatre, and it sits smack dab in  the center of Rome. It started construction under the Emperor Vaspasian in 70 AD, but was actually completed under the rule of his successor, Emperor Titus. The Flavian part is derived from their family name of Flavius. These two, along with Emperor Domitian are known as the Flavian dynasty. It is estimated to seat between 50-80,000 spectators. That’s a lot of blood thirsty people!

The Colloseo  is also the biggest one of the Roman empire. I have always wondered what happened at the end, when they realized that one side did not meet the other, and they had to improvise. Did the emperor give a thumbs down to the architect and had him killed? Like an “off with his head!” kind of thing. I think l would have ordered them to destroy it, and start from scratch ;-), tyrant empress that l would be! 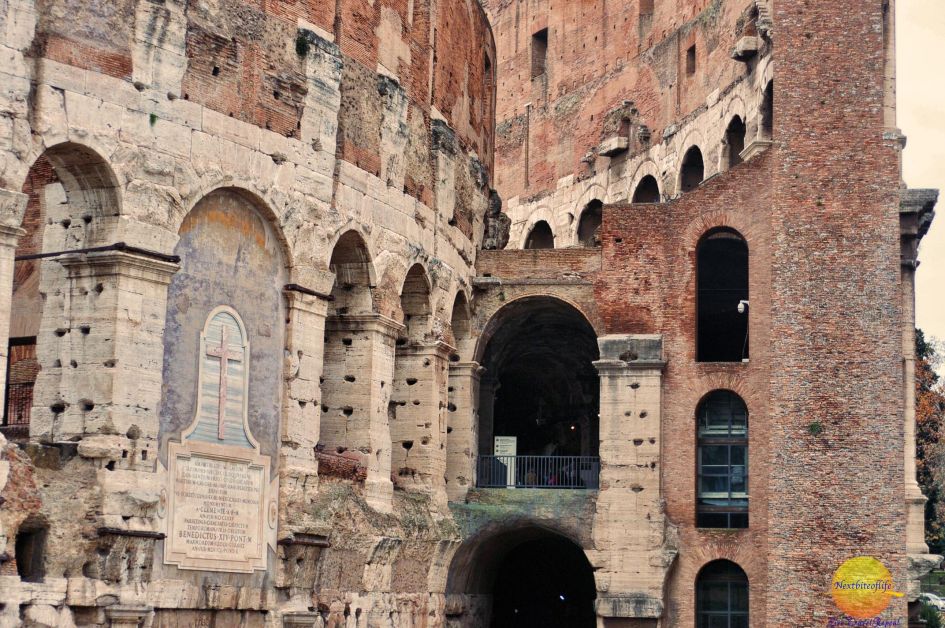 The patch job. Off with his head!

For a more complete explanation and tour of the Colosseum, read our post on the Roman Forum and Colosseum tour. 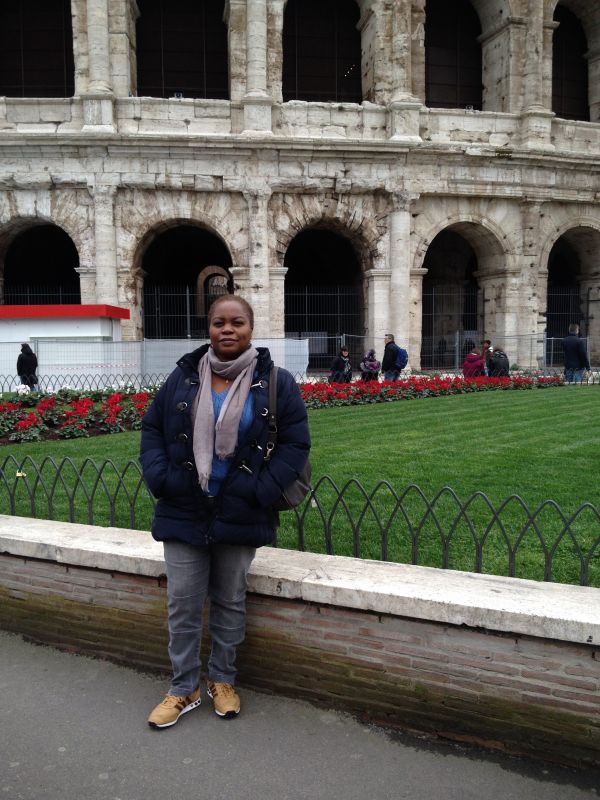 Picturesque area of Rome, but watch out for those “gladiators” that scam you for high priced pictures. 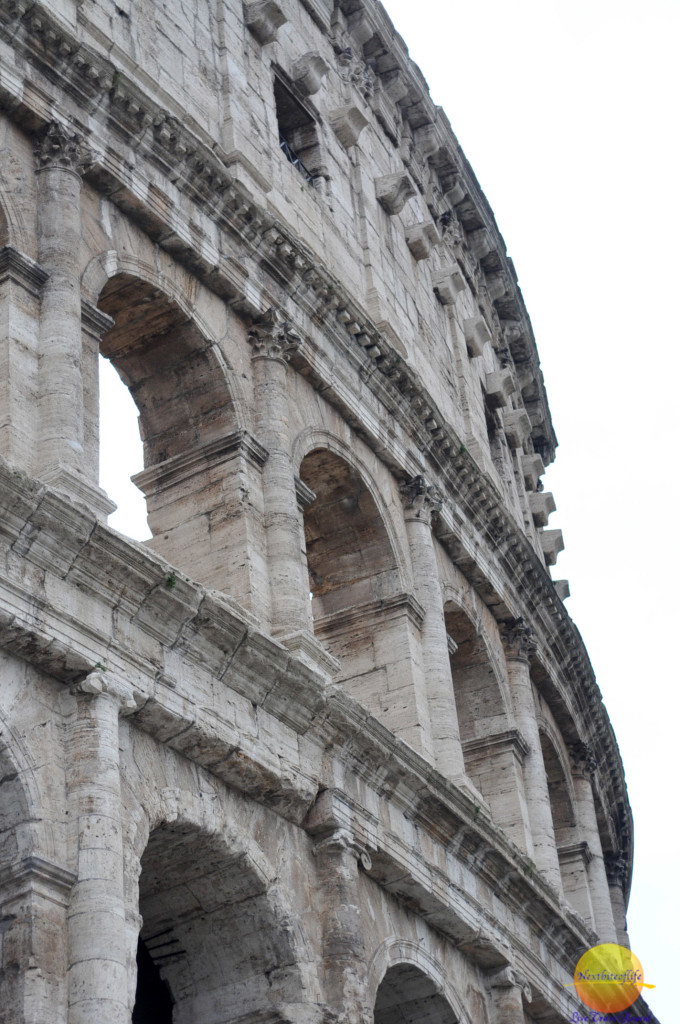 I never get tired of the Colosseo Roma 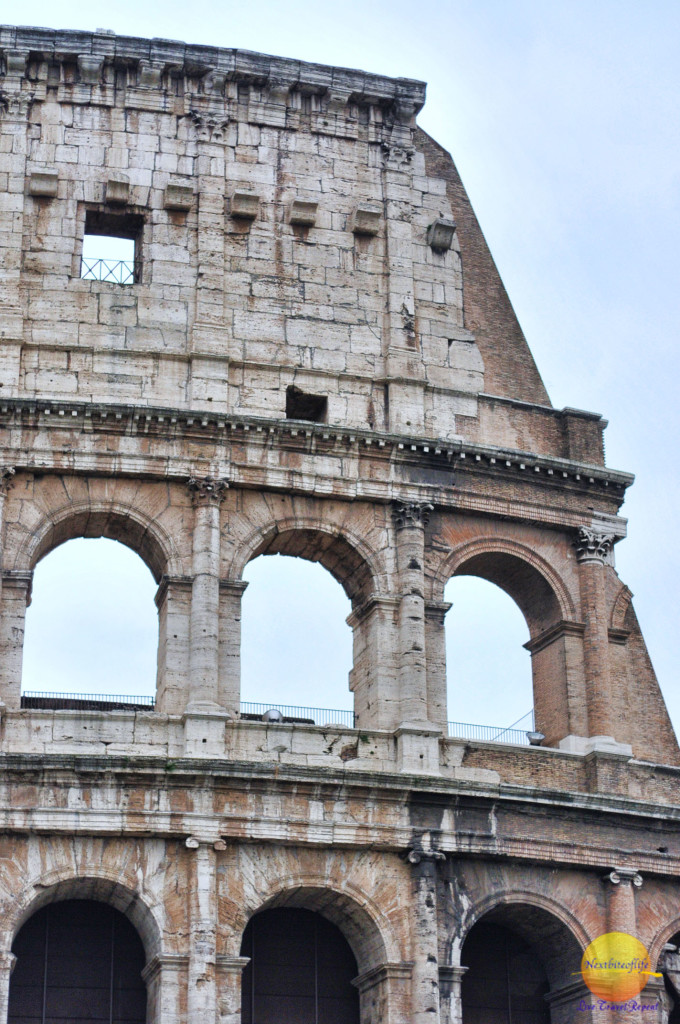 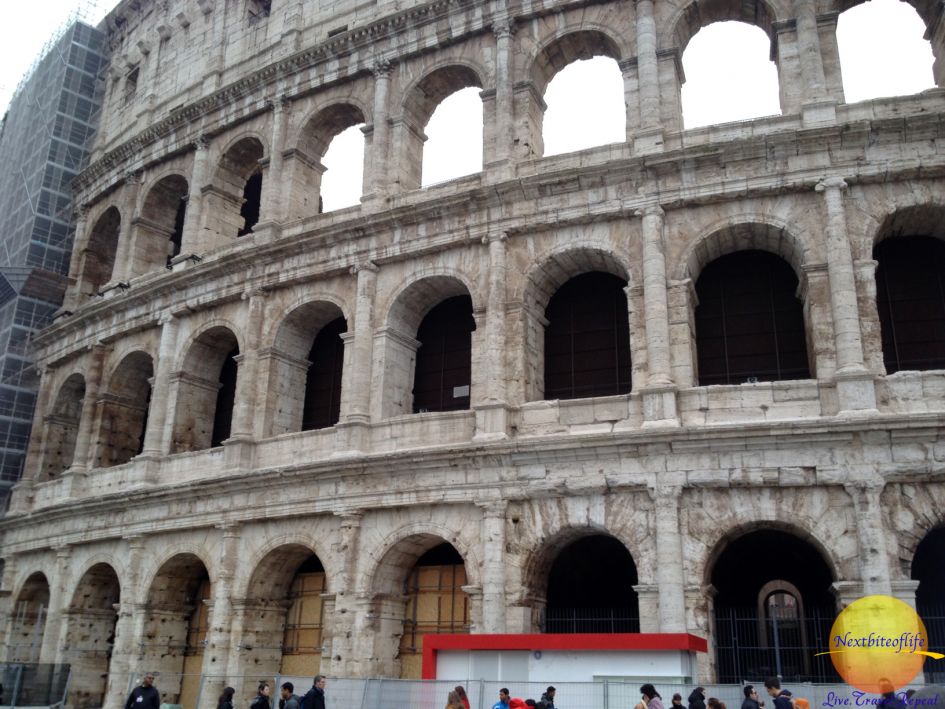 The already cleaned section of the Colosseum . I imagine when they get all around, it’s time to do it again..yikes!

On our visit this time, we did not go in for the tour. I was happy to take the pictures from outside, maybe someday l will do the tour again to replace my photos. Despite the fact that it was December, the line was still very long, and me with little patience.

I had read about some sneaky back entrance that you could get tickets at, and was disappointed that we saw no such place :-(. It would have been lovely to skip the line. There was refurbishment going on all around the Colosseum, and some parts were draped over. Admission is €12, and  l believe it’s still free entry on the first Sunday of the month. 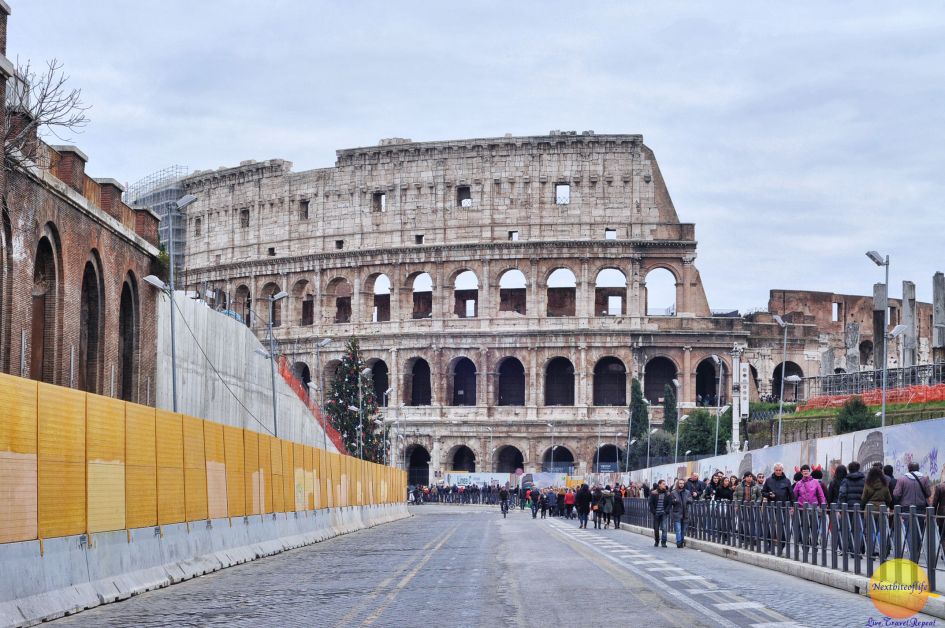 As you can see, the cold does not keep any tourists from seeing the best thing in Rome, the Colosseum. 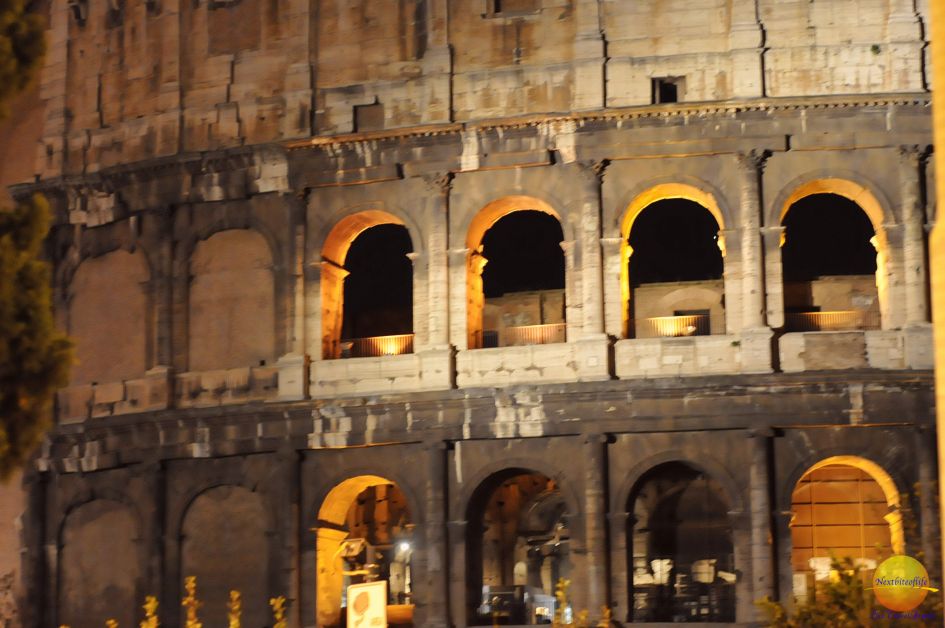 My pathetic attempt at a night shot without help.

Best Pizza in Rome: Tastiest pizza in Rome is found at the Pizza Forum!

Where to eat in Rome: After roaming around the Colosseum, and people watching, we decided to have some pizza for lunch. I will now tell you the most fantastic pizza place close to the Colosseum. Pay no attention to the glib young men and women trying to entice you to eat at their restaurants near Colosseum Rome. Instead, go on the side street called Via San Giovanni. It’s easy to spot as there is a small ruin right on the corner of the street.  It’s a small unassuming place from the outside called Pizza Forum. 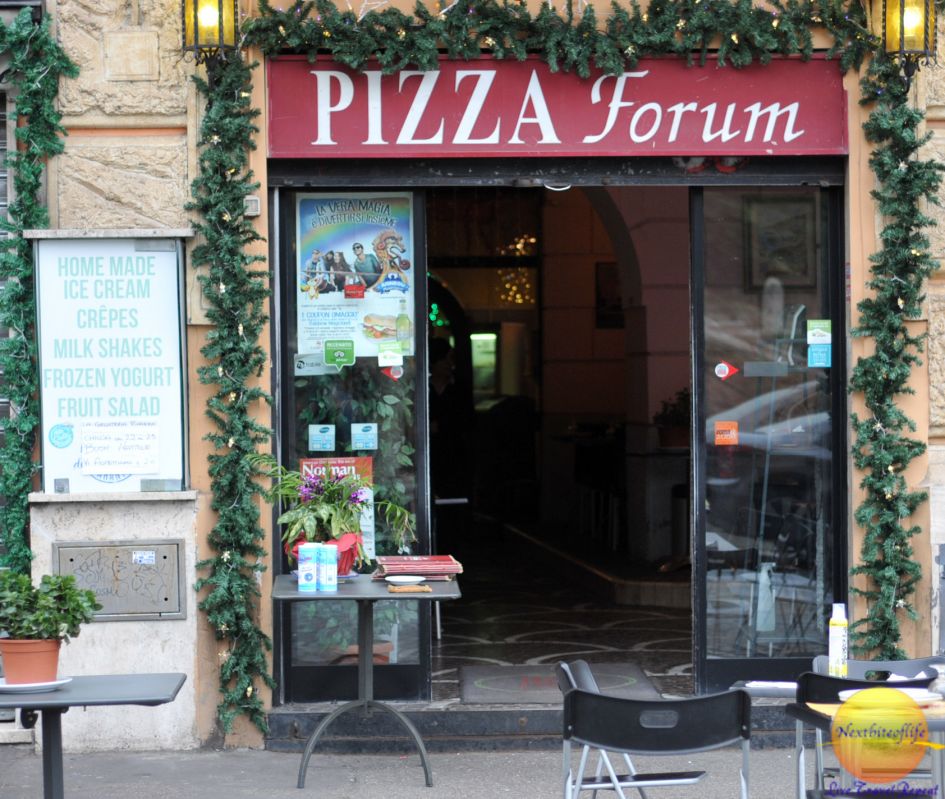 Much bigger than it looks on the outside, and a lot of locals eat at the pizza forum. It has the best pizza in Rome in my opinion.

Across the street from the restaurant and will be your view if you choose to eat outside. I, however enjoy watching my pizza being made in the wood fired oven.

OUR RECOMMENDED HOTEL IN ROME FOR FRIENDS AND FAMILY IS A. ROMA LIFESTYLE HOTEL.

Best pizza in Rome, bar none:

Pizza Forum has been at the same location for over forty years. Federico’s high school was close to the Colosseum. He and his friends used to have pizza there often as kids. It was owned by people from Naples and he swore they had the best pizza. Bad news is that those old owners have retired.

The good news is that the new owners (newish, as they have been there for years too) are also from Naples, and their pizza is incredibly good. Just as good as he remembered it. We resumed our discussion of the style of pizza we like better, the Roman (thinner, bigger) or the Neapolitan style (thicker, smaller)? After eating this pizza, l think it has a slight edge for me over the Roman. It was a very hard decision.. hah! It makes me glad that most days, this is about as tough as my decisions get :-) :-) :-). 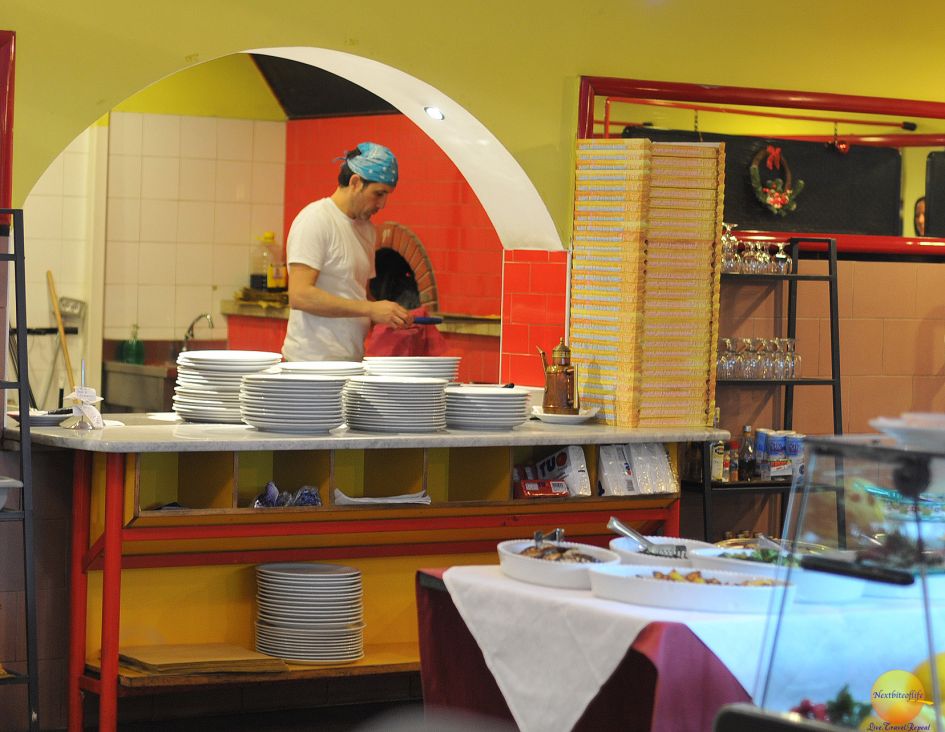 The cappocione making our pizza at Pizza Forum. 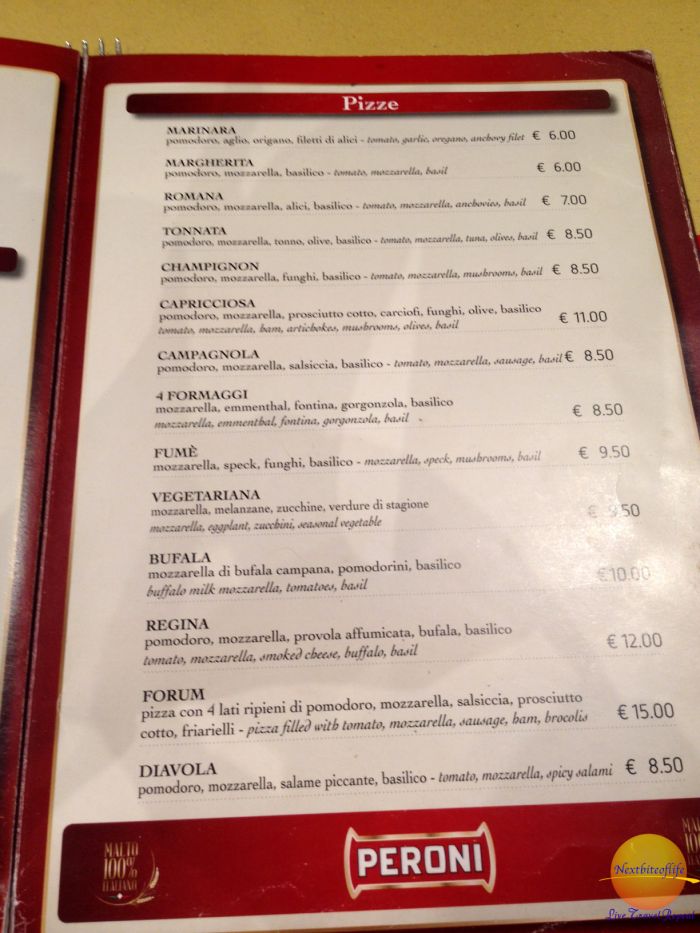 Not too pricey.. Pizza Forum menu

Protect your trip with travel insurance. Get your free quote. 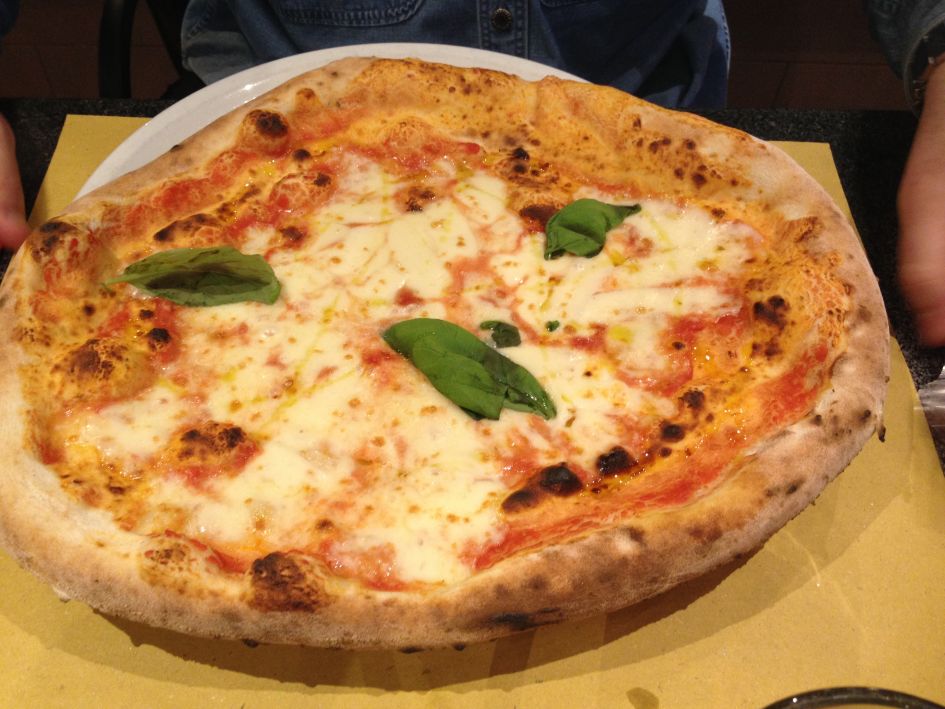 What to eat in Rome: The Margherita pizza at Pizza Forum Rome. I love Napoli style pizza and consider this the best and tastiest pizza in Rome after trying many, many places over the years. 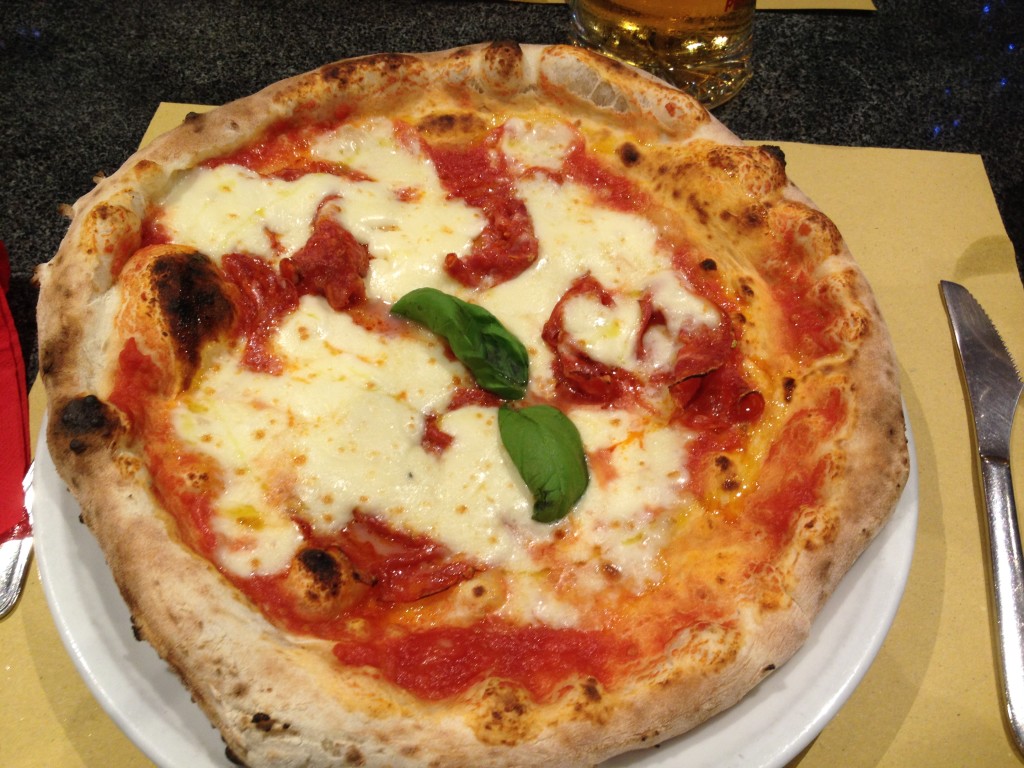 Best Neapolitan pizza Rome is the Diavola..my favorite pizza of all time! made with Soppressata, which is similar to the pepperoni and when it’s done well, it is simply the best.

I can’t vouch for other things on their menu, but the pizza? Absolutely fantastic, you can’t go wrong. He had the Margherita as usual. I went with the closest thing to my favorite, pepperoni, and had the Diavola. It was baked in a wood oven and done to perfection. That, and a mug of Italian Peroni beer, and we were happy as clams. I did not finish mine. I talk a lot of game, but l can never eat as much as l hope, and took the rest home. It was just as delicious the next day. 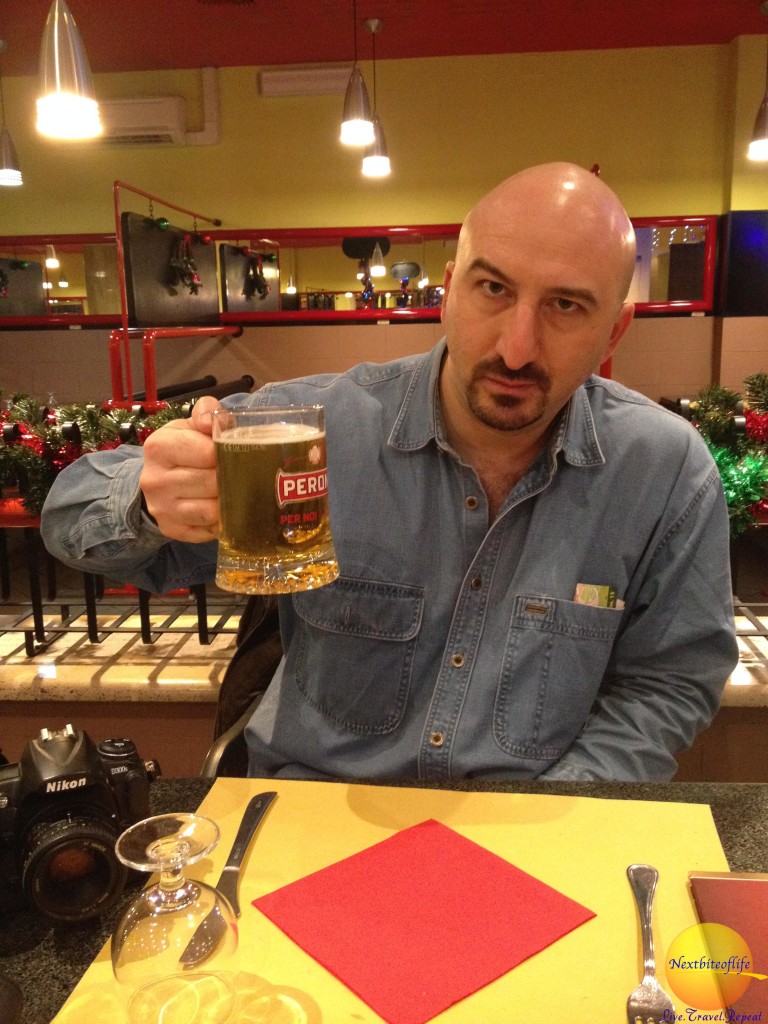 Salute! Beer at the Pizza Forum where they have the best pizza in Rome near Colosseum!

So, there you have it. When in Rome, go see the Colosseum, and go have one of the best pizzas you will ever have at the Pizza Forum. I am sure there are a whole lot of places where you can have great pizza in Rome, l have eaten at a bunch.

This one really stands out for the taste and quality. The service was great too, and the prices are pretty reasonable for what you get. Now, you know where it is, so when they try to sweet talk you, you don’t give in just because you are hungry and tired :-), you’ll walk with a purpose to your destination. Bam! One less thing to worry about. 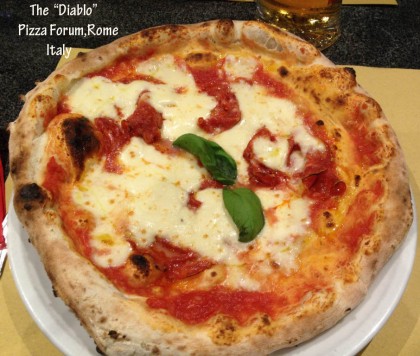 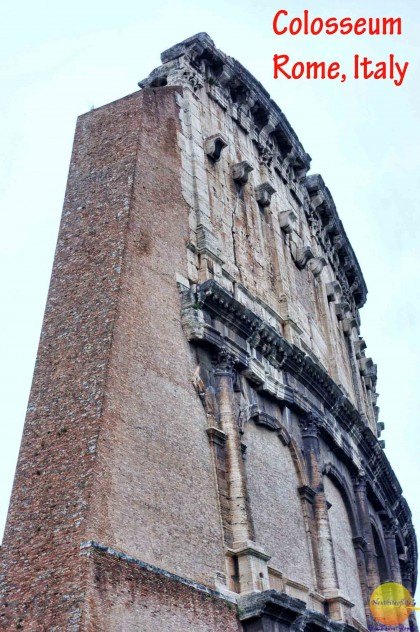 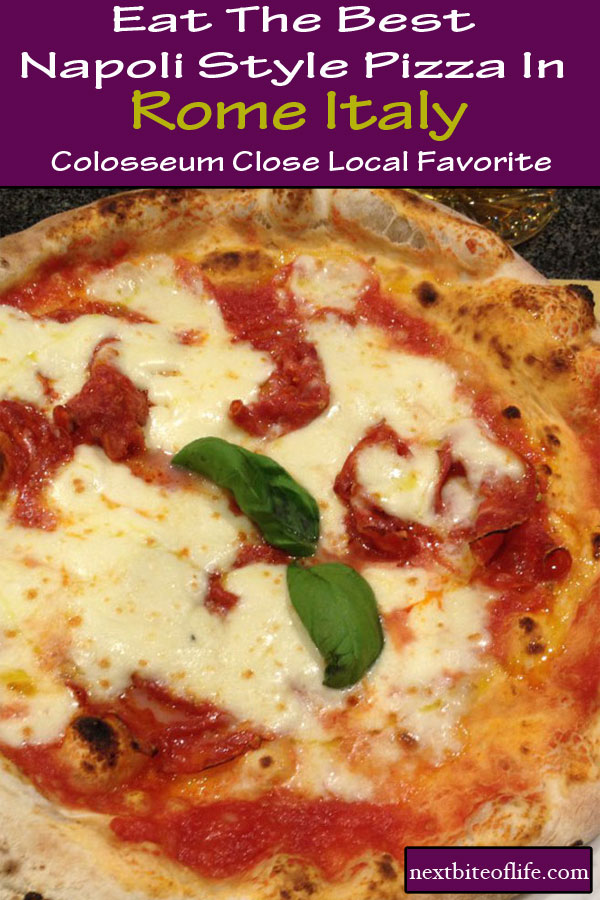 Have you been to the Colosseum, and was it what you had expected? If, not, would you like to go? and lastly,  does this pizza look yummy enough for you to want to try it? :-)