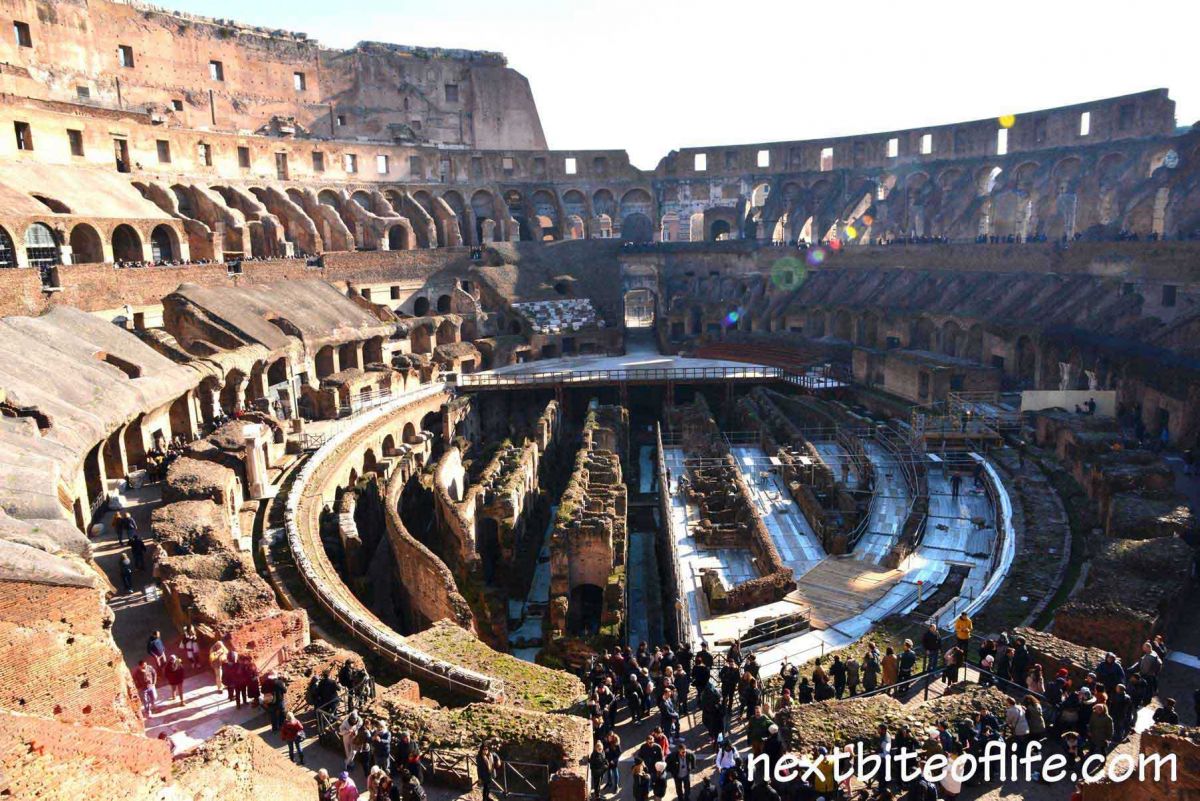 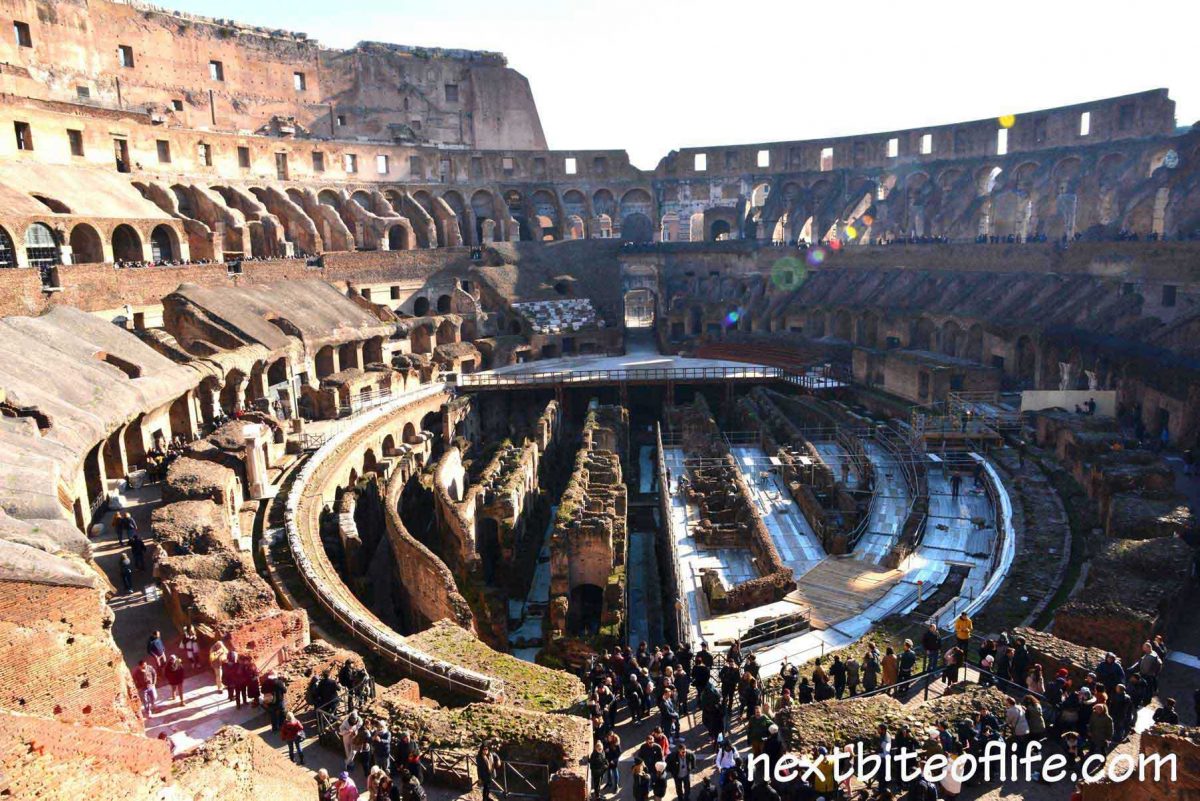 When in Rome – act like a tourist and see everything you can is my advice. This time around, after spending time with Federico’s family, it was time to do more of the ancient Rome tours. Our Roman history tour was a combination walking tour covering the Colosseum Underground, Palatine Hill and the Roman Forum and it was complimentary, courtesy of The Roman Guy. Here’s why we think you should definitely do this tour as part of your Rome itinerary when you visit the eternal city.

This post contains affiliate links. If you purchase anything using our links, we earn a small commission.

What to know about the Colosseum Underground Roman Forum and Palatine Hill Tour:

Our morning started off well enough. We got up well ahead of time enough to get to our  rendezvous point which was right at the Colosseum metro stop. What we didn’t count on was the bus not showing up on the frigid morning for over forty-five minutes! This is quite common in Rome, at least it wasn’t a strike! We ended up being about fifteen minutes late. Luckily we were able to join our group just before we had to go underground ( I emailed their office and they had someone waiting for us at the tube stop who then walked us over to join the others. I loved how they went the extra mile 🙂 ).

Our skip the line Colosseum tickets having being arranged by The Roman Guy meant that we were able to go straight through to the gate. You have to go through a metal detector and bag search prior to entry, but it was fast. The Colosseum underground tour was very mind blowing to me. Some of the tidbits gleamed from the tour included the fact that there were approximately a thousand people working below the surface. This included slaves, gladiators, servers etc.

We saw the contraptions used to transport the animals from below to the surface. The lift was operated by 2 people if l remember correctly. I can’t even imagine how many people lost their lives working these things or getting mauled by the dangerous animals.

We learned that the gladiators of old looked nothing like the ones in the movies :-), certainly not like Russell Crowe! In fact, most had fatty bellies and had good standard of living (massages, personal cooks etc). Being a gladiator was something people aspired to be, including at least one member of royalty (can’t remember the name though). Trust me when l say these are facts that you would be hard pressed to find somewhere else and it gives you a deeper understanding of life back then, and seeing the way they stood presented on paper made it all the more real.  We highly recommend this group tour under the Colosseum. I had no idea that there had been Jewish slaves or that there was a menorah at the Colosseum.

Supposedly, you go to heaven if you kiss this cross. Federico did trying to score brownie points (won’t do any good! 🙂 ). I didn’t bother.Climbing up the stairs to get to the top of the Colosseum was tiring, but definitely worth it for the views. The lower floors of the Colosseum which could seat approximately fifty thousand people were reserved for royalty and other important members of the senate. The middle to upper floors contained the working class while the slaves and commoners were up top. Once you’ve climbed the stairs, you understood what our guide said about people not wanting to go back down, they made sure to buy all their needed drinks etc before the steep stairs. The views of Rome are stupendous from above. Visiting the Colosseum is always a good idea when in the city. Compared to the smaller arena in Italica which we loved too, it’s ginormous.

Palatine Forum tickets are also included in this tour. Our tour continued with a walk from the Colosseum to Palatine Hill. You might know that Rome is built on seven hills, with Palatine Hill being one of them. The Roman Emperors had their homes here. Make that estates as they had huge footprints. You can just imagine the views you get from up there too. Federico, despite living in Rome for most of his life had never visited and was just as enamored as the rest of the group. There was an Emperor who had his own private chariot racing track (Stadium of Domitian) and we saw the ruins that remained. It’s like l always say, “It’s good to be King”!

We also saw some pretty impressive remains of tile work and dining room of some Emperor whose name eludes me. Among other things, gardens, private dock and the Senate House. These people knew how to live. Loretta kept us entertained throughout the tour and l loved the fact that no question stumped her, even Federico’s, who has the most inquisitive mind when it comes to things he is passionate about and studied as a student (Latin and History). Touring with a guide to see these parts of Rome really elevates your experience and is better than doing it on your own, which you can do of course. Even with a guide book, you might still miss a lot.

Our Rome walking tour ended at the Roman Forum – the main artery of ancient Rome. This was where everything happened, be it politics or religion.  She showed us the most picturesque spots, little things we wouldn’t have discovered on our own, like the giant door with no stairs. Information about the vestal virgins and their huge sacrifice. This in turn tied in to a prior visit to the Mouth of Truth for me. Seeing the temple of Julius Caesar was pretty cool and l choose to believe that this was indeed where his body was burnt to a crisp. Flowers are still laid there till today. If you’re hungry after your tour and are craving the best pizza in Rome, be sure to check out our favorite pizza joint that is just steps away from the Colosseum.

One great thing about Rome and Italy as a whole is that water is freely available everywhere and you are not gouged into spending $3 for a small bottle of water. Loretta, our guide even showed us how to drink water from the fountains like a true Roman, using the Nasone (also Federico’s nickname for our beagle because of his big nose 🙂 ).

Other great Rome tours to consider on your Rome itinerary include:

We love touring with The Roman Guy and can highly recommend them. Small group tours are awesome and their staff members are wonderful and definitely knowledgeable. Save some $ by using our promo code below: (Please note that the discount doesn’t include the Colosseum Underground Palatine Hill and Roman Forum Tour. It does include their other Roman tours as well as The Paris Guy Tours). 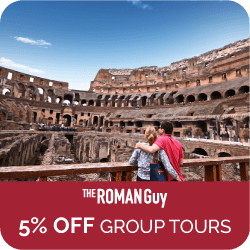 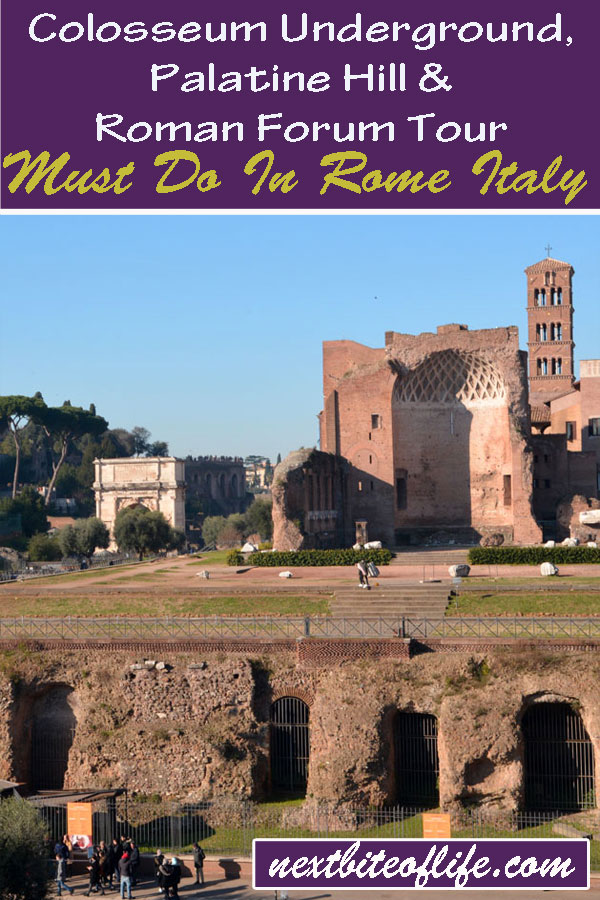 Have you been to Rome? If yes, did you make it to the Colosseum or Palatine Hill and Roman Forum and was it an enjoyable experience that you would recommend to others?