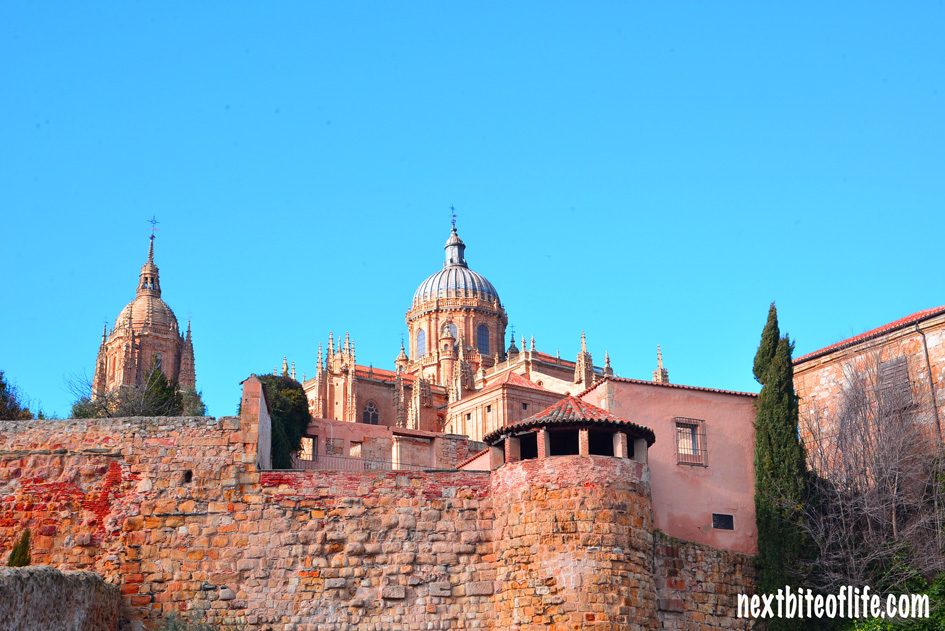 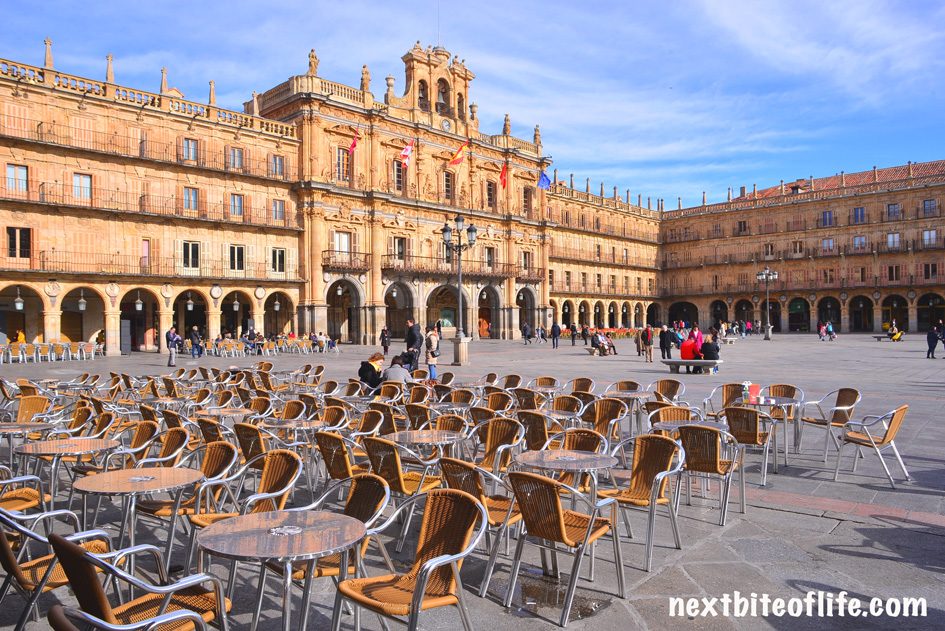 I’ve wanted to visit Salamanca ever since l saw the old centre in a movie. It was therefore a no-brainer that we would add it to our itinerary. Salamanca in the west of Spain was our next destination after leaving Burgos. It turned out to be every bit as beautiful as l imagined. It definitely deserves its ‘Golden City” nickname. Here l present your Salamanca Spain guide, and why you should consider visiting.

Salamanca is the capital of the province of Salamanca, part of Castile and Leon. It is considered a college town and a popular destination for international students. The old town was declared a UNESCO World Heritage Site in 1988 and upon seeing it, you know why.

The one thing you notice right away is the uniformity of the city. All the buildings are built with sandstone. Everywhere. The apartment buildings as well as the historic sites and churches use sandstone as a major component. We saw a brand new building being constructed and it just blended in to the landscape seamlessly. It gives the whole city a sense of cohesiveness and glamour, especially at night.

Best things to see in Salamanca:

The oldest university in Europe, and the world’s third oldest even.  Founded in 1134, it was also the first designated “university” in 1254. Christopher Columbus lectured here about his discoveries. Located in the old city, it is definitely worth having a look around the buildings. We didn’t do the tour of the interior which was €10 per person according to the sign. I think there was also an option of €4 to see just a part of the grounds.

The one thing everyone looks for in the facade of the main university building is the frog (la Rana), a frog that sits on a skull and has become legendary, and one might say the icon of the university. We had a really hard time spotting it. My pride would not let me ask the man who was selling the frog figurines outside the building. We ganged up with two other couples to spot it, each person taking a different part of the facade to no avail much to the amusement of the vendor. Yes! I finally cheated and looked it up online which then narrowed down where to look. Hint..look up and to the right in the corner. 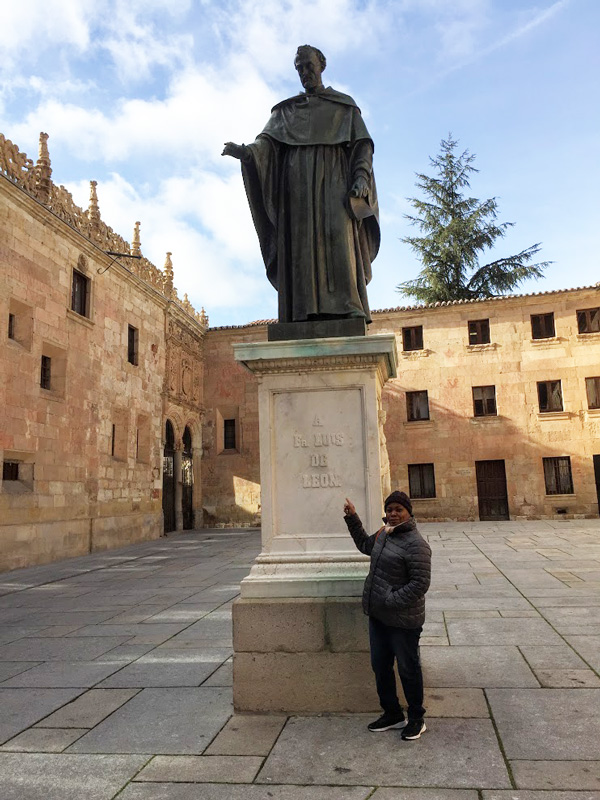 No one really knows the significance of this frog which has been there since 1553. Some say it’s associated with death, some say lustful sin of the flesh. The most plausible explanation is that the skull and the frog are traditions of carpe diem which is part of the university’s anthem which includes “let us enjoy while we are young”. Whatever it means, it’s fun to try and spot it. **Hint.. Look up about halfway and to the right corner and find the skulls first**

We both agree this Salamanca Plaza Mayor is simply the most beautiful one we have ever seen. If you know us, you know we seldom agree on the same things. Case in point, Prague :-). I first saw the square in the movie “Vantage Point” many years ago. If you haven’t seen it, you should. It’s a very good thriller. The shots from above were filmed on location as well as a few ground shots, but the rest of the film production took place in Mexico l think. This was because it would have required the city to shut the plaza for three months which they refused to do, as tourism and the plaza are huge draws for the city.

You definitely want to visit it during the day, AND at night, because that’s when it really glimmers, thanks to the combination of lights and the sandstone. It is spectacular. We actually visited every single of the four nights while we were there. *The lights are turned off at midnight* so you know. I think this was the highlight of the city for me. The architecture is a grand mixture of Gothic, Romanesque, Baroque and Moorish influences, maybe more. It has been there since the 18th century. What a beaut!

The exterior of this 1493 building has more than 300 stone shells (conches) which makes it stand out from the other glorious buildings. These shells represent the emblem of the order of Santiago and now houses a modern library. Legend states that one of the conches contains a bag of gold. The interior courtyard is pretty cool and the exterior reminds me very much of the Mezquita in Cordoba.

Considering moving to Spain? Make sure to get your copy of our guide which walks you through preparing for your move and what to expect as an expat. Start enjoying your life in the sun sooner.

This is the old cathedral which is so elegant, it befuddles me why they have a “new” one. This old one dates back to the 12th century and it is an astounding beauty in the same Gothic and Romanesque architecture that can be found in most other cities of Spain. If you’re feeling adventurous, you can climb to the top of the 110 meter clock tower Torre del Gallo for amazing views of the city.

This later addition to the old cathedral is also one to behold and was added on in the 16th century. A combination of Gothic and Baroque (for variety l guess ), blends in nicely with the older cathedral thanks to the limestone. The one popular thing to do here is to spot the astronaut on one of the facades. This was apparently done by one of the artists during some renovation work carried out in 1992. There is also a faun eating an ice cream cone if you look, but the astronaut is more popular. *Hint… look to the left of the red door*. It took us forever to spot it! :-).

Saying this convent is beautiful would be an understatement. The architectural style is Plateresque. I looked it up and its definition in Wikipedia is

“in the manner of a silversmith” (plata being silver in Spanish), was an artistic movement, especially architectural, developed in Spain and its territories, which appeared between the late Gothic and early Renaissance in the late 15th century, and spread over the next two centuries. It is a modification of Gothic spatial concepts and an eclectic blend of Mudéjar, Flamboyant Gothic and Lombard decorative components, as well as Renaissance elements of Tuscan origin”.

The San Sebastian convent is considered to be one of the finest examples, and l wholeheartedly agree. There is another equally famous convent (Santa Clara) that we didn’t have time to visit either.

Where the locals head to for their fresh fruit and meat. Not anywhere near as big as the one in Valencia for example, it’s still worth a look if you like to check out prices for comparison like we do. There are not a lot of stalls, but there are a couple of bars upstairs to sit and people watch. Located very close to the Plaza Mayor.

This was one of the things l had wanted to see in Salamanca, as l wanted to compare it to the one in Cordoba which l really liked. It was a bit weird that a lot of the locals were surprised that we wanted to visit it. I guess it’s not popular. A few didn’t even know where it was, which amused me. Muy lejo (very far), we heard a lot. We didn’t mind too much because it was all downhill and outside of the old city.

A beautiful stone arch bridge, it has been in existence since the first century and was part of the “plata” (silver) route between Astoriga and Merida. It crosses the Torme river. Like l said above, we didn’t climb the Torre de Gallo, but we had the most amazing views of the old city and cathedral from down there. Then of course we had to walk back up because my pride wouldn’t let me take the bus. Besides, it was slow inclines so it wasn’t as terrible as it could have been. I definitely wouldn’t like to walk up in the summer time.

Is Salamanca worth visiting? 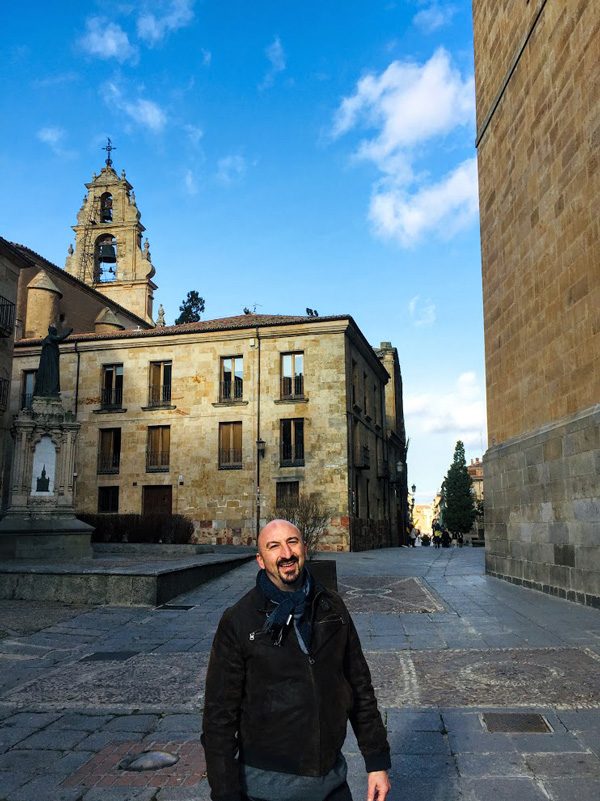 Most definitely. It is an absolutely wonderful place to visit and the beauty. There is definitely enough to keep you occupied for two full days if you rush things, or longer if you take it easy like we did. We are definitely looking forward to returning. The fact that it’s full of students lend a hip, youthful vibe and l like the mix with the more ahem.. . mature people like us.

Is Salamanca expensive? (Food in Salamanca):

The prices were pretty reasonable. I know you were expecting us to eat tapas, but nah! I was thrilled to find a most awesome Chinese restaurant called Gran Pekin that had mouthwatering potstickers and really spicy won ton soup. Spicy in Spanish means mild at best and we were so happy with the food here, we ate there twice.

We also ate at The Good Burger, a restaurant chain. Even though we have them in Valencia as well, I think the prices here were lower. The food is made on request (kind of like In n Out in the states) but better, at least to me.

We also did eat food from the region at least twice. The one place we really liked was called La Jamoneria which had a menu al dia for 10€ per persion, but you got a full bottle of wine which was actually good quality from which to drink. Even if you finished the whole bottle, it was still €1.50 which was included in the original 10 euro price. A popular place indeed. If you see tons of ham hanging from the ceiling, you’re in the right place.

Where to stay in Salamanca Spain Guide:

We stayed at the Silken Rona Dalba Hotel which was less than a five minute walk from the old town. It has a pretty impressive looking 12th century church smack dab in front of it and we didn’t even get a chance to see the interior (another reason to go back!). The room was big and comfortable, and there is a Spa which l didn’t get to try out either. We can definitely recommend this hotel. We paid €45 per night which was an amazing price. If you add breakfast, it was an additional €8 per person per day, but we opted for breakfasts in the old town.

Find and reserve your hotel:

We both really liked the city and will definitely return. The weather was cold, but not insanely so like in Burgos. Most people speak Castilian Spanish too so it was easier to understand them. Our four nights were lovely and l think the city is worth considering when planning your Spain itinerary. It is worthy. After leaving, I realized that l had wanted to visit the museum of art deco…and totally forgot about it. Bummer! The building looks cool from the outside. 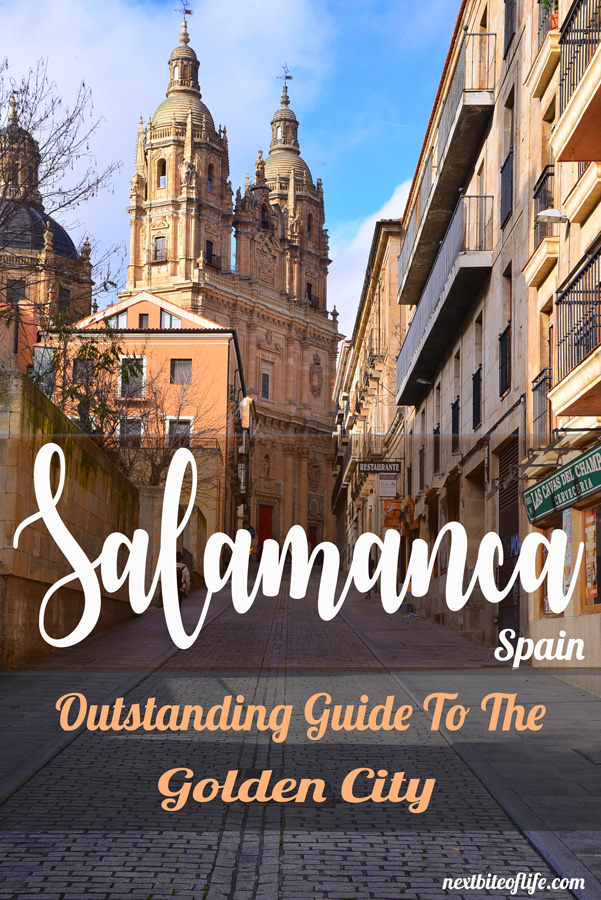 Have you been to Spain? If so, did you visit Salamanca? If not, does it seem like a place you would like to visit?